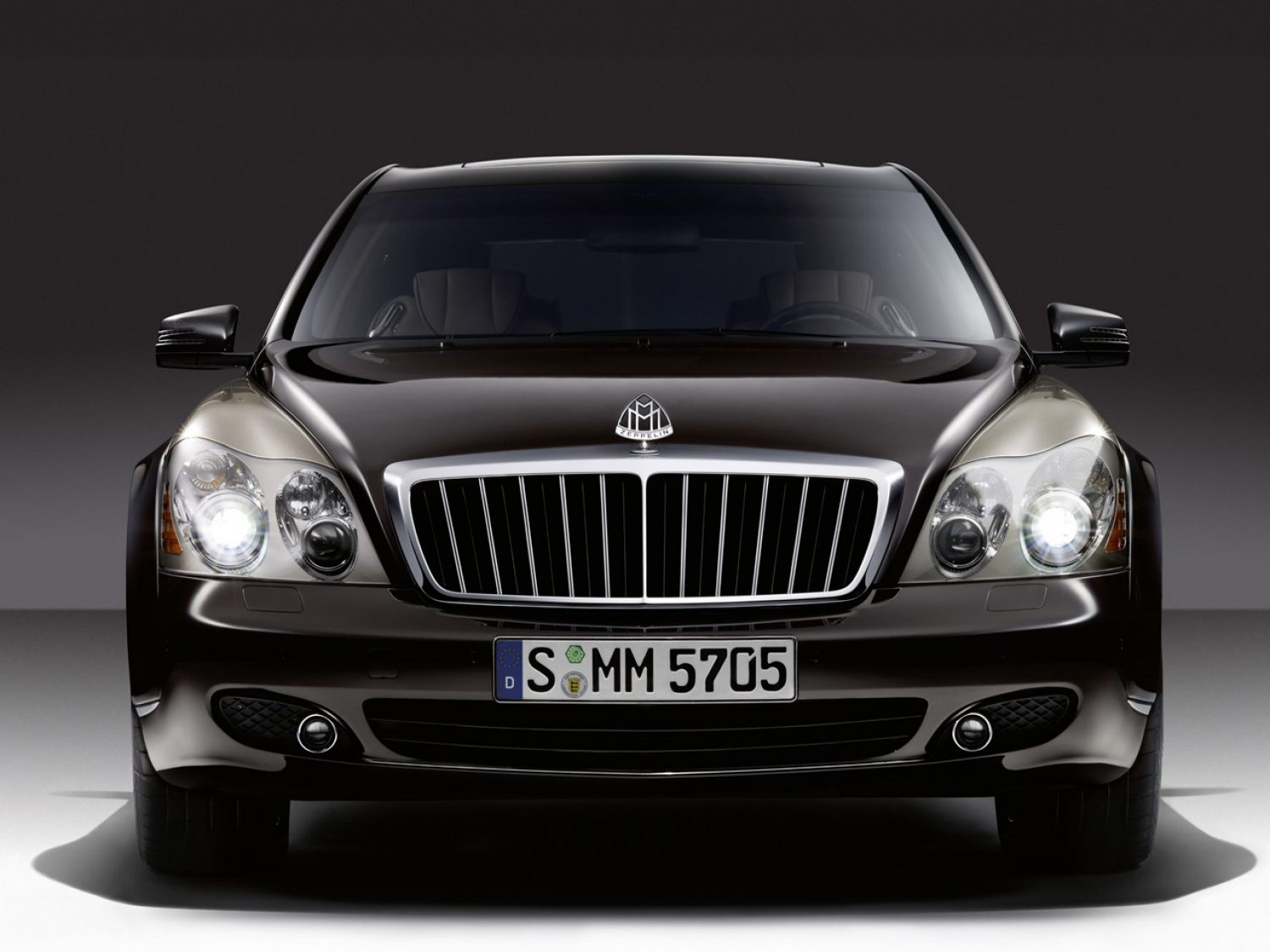 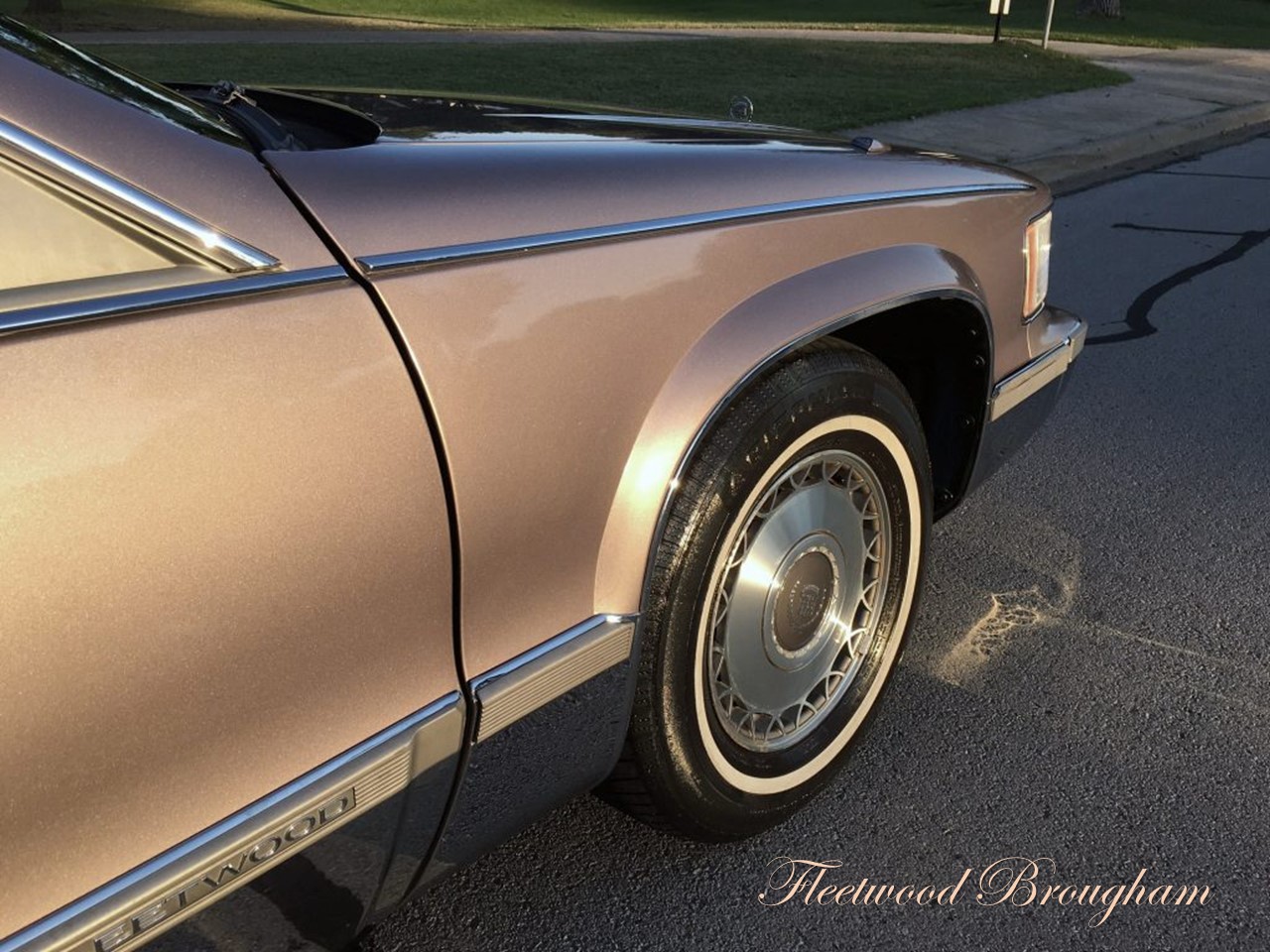 There’s nothing like the traditional full-size Cadillac. From the admiring glances of envy…to the myriad standard comfort and convenience features and accessories – The stately Fleetwood Brougham was considered the most luxurious owner-driven Cadillac in the model hierarchy. Fleetwood-bodied Cadillacs are the epitome of grandeur with a poised dignity which was the hallmark of every traditional Cadillac motorcar.

The 1994 Fleetwood Brougham is endowed with a special type of spirited operation few luxury cars share. It’s the 1993-1996 rear-wheel drive Fleetwood series that is the last of the breed…the end of an illustrious era in motoring. They preclude the traditional luxury sedan which left a void in American automobiles no other luxury car can fill. The majestic 1994 Cadillac Fleetwood Brougham presents an encore performance…in the continuing saga of “As the Standard of the World Turns.” 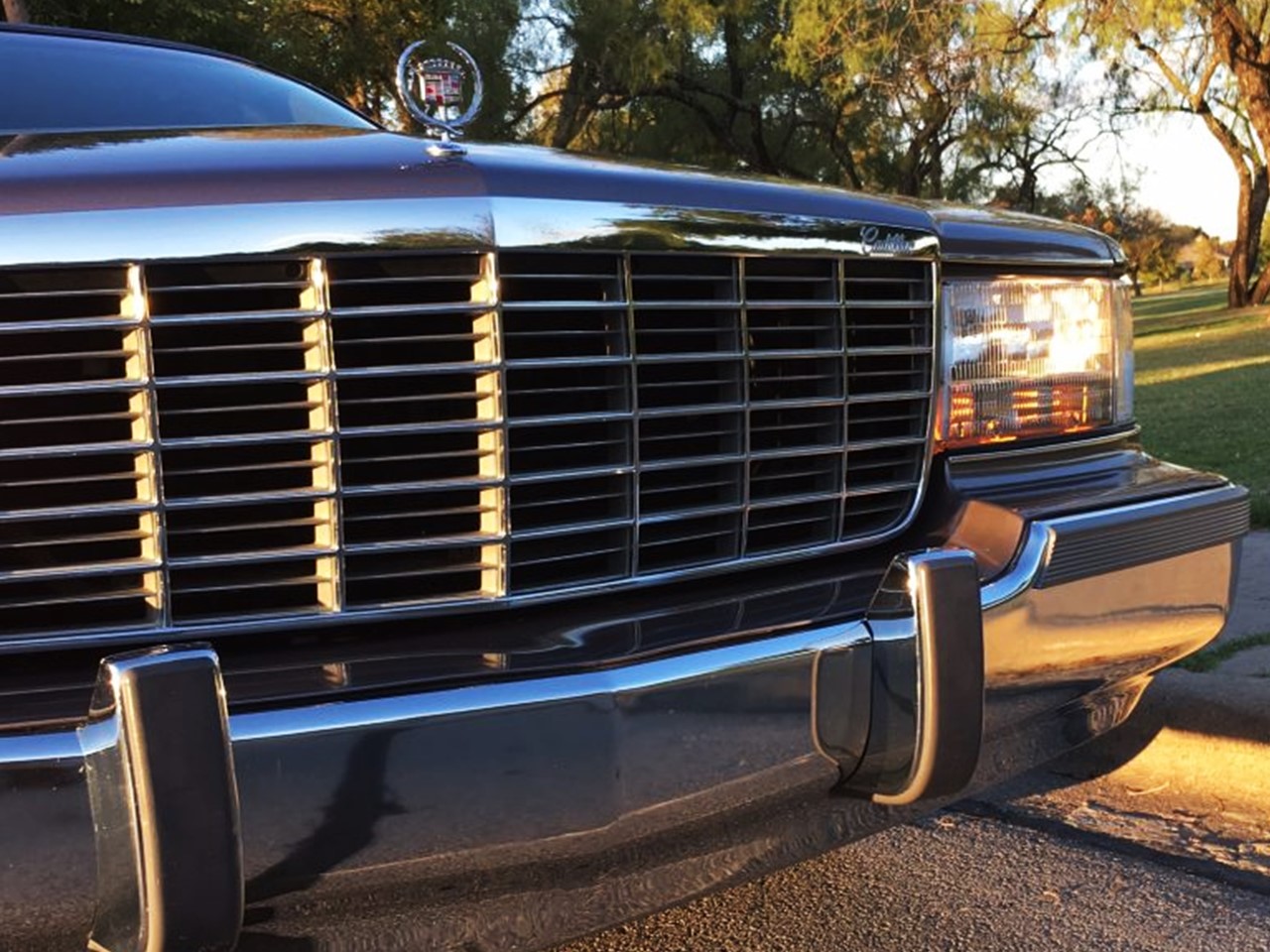 It’s dramatically styled in its beauty and bearing. The formidable Fleetwood Brougham is the motorcar that represents the “Standard of the World” in a majestic fashion only Cadillac could create. These magnificent automobiles are more inspiring to behold and more rewarding to own than any other full-size luxury sedan.

Fleetwood models possess an eloquence and dignity befitting a flagship of its stature. The Brougham augmented the Fleetwood series with elegant appointments and signature features for luxury in the grand Cadillac manner. The 1994 Fleetwood Brougham carried on the tradition with glamour and distinction. Cadillac Fleetwoods remain America’s most aristocratic automobiles. 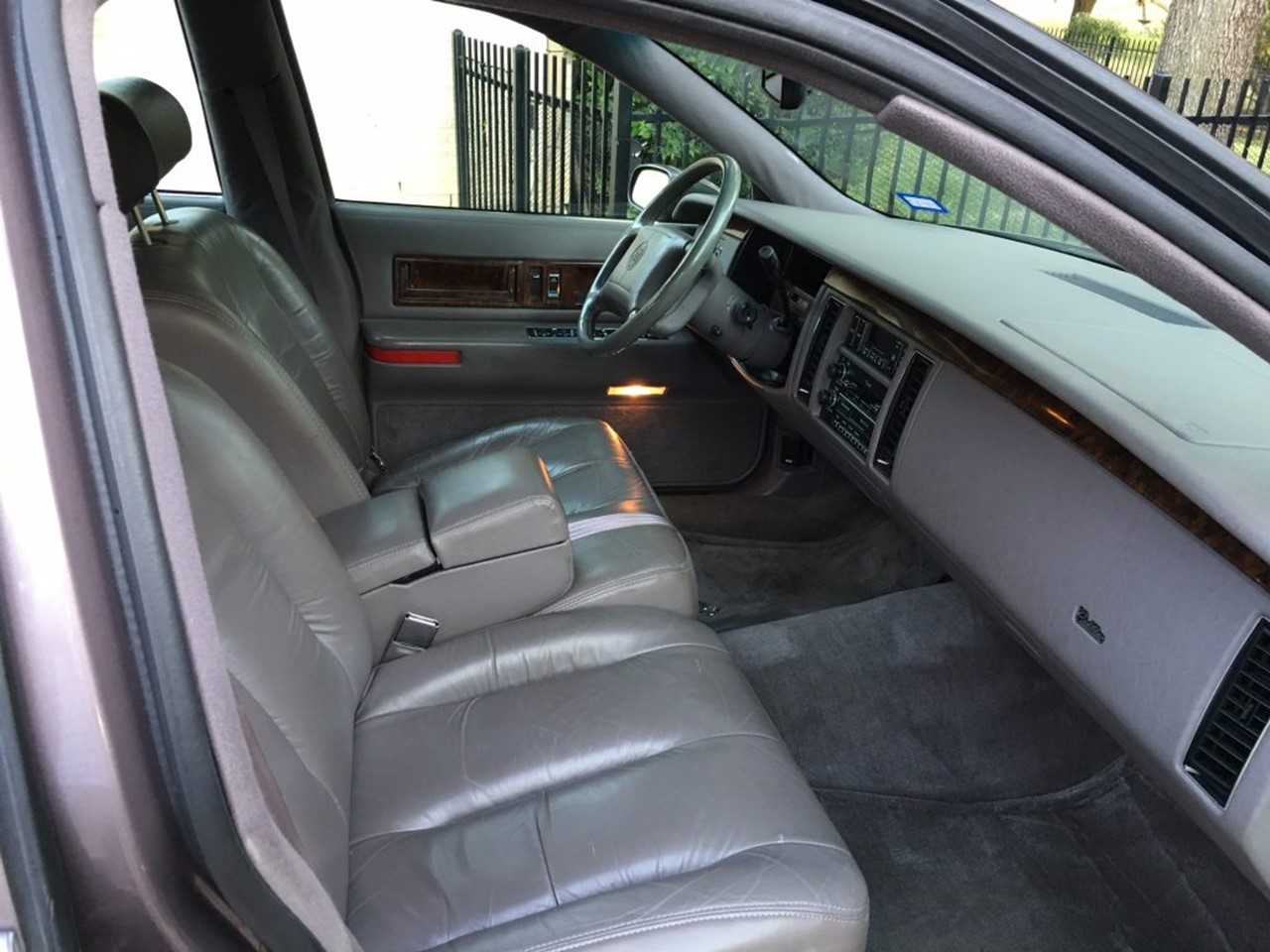 The gracious proportions of Fleetwood Brougham’s traditionally-inspired architecture evoke thoughts of the days gone by when we had the choice of a ‘real’ full-size luxury sedan…and a Cadillac – all in the same car. Fleetwood Brougham’s tall, extra-wide doors provide easy entry and exit. Sweeping fender lines flow systematically enhancing aerodynamic efficiency…the EPA rated the 1994 Fleetwood Brougham as 25 mpg highway.

Chrome bright work clads the lower body sides which include removable trim that mocks traditional rear-wheel fender skirts – Cadillac Style. Its stately silhouette is augmented by a long nose and short rear end design reminiscent of those fabulous classic Fleetwoods. Most important, Fleetwood Brougham’s engineering places a large sumptuous cabin between its occupants and the road… 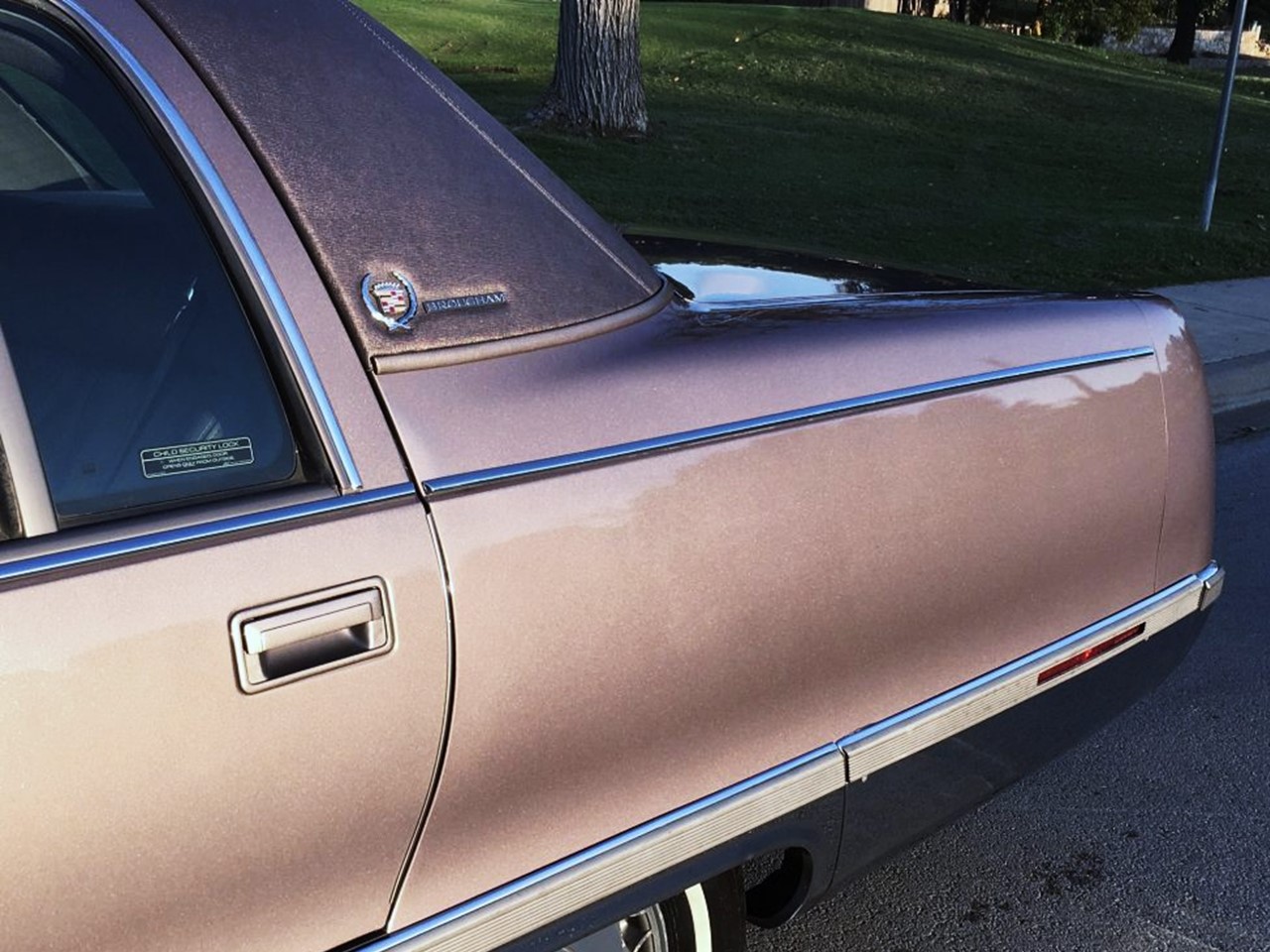 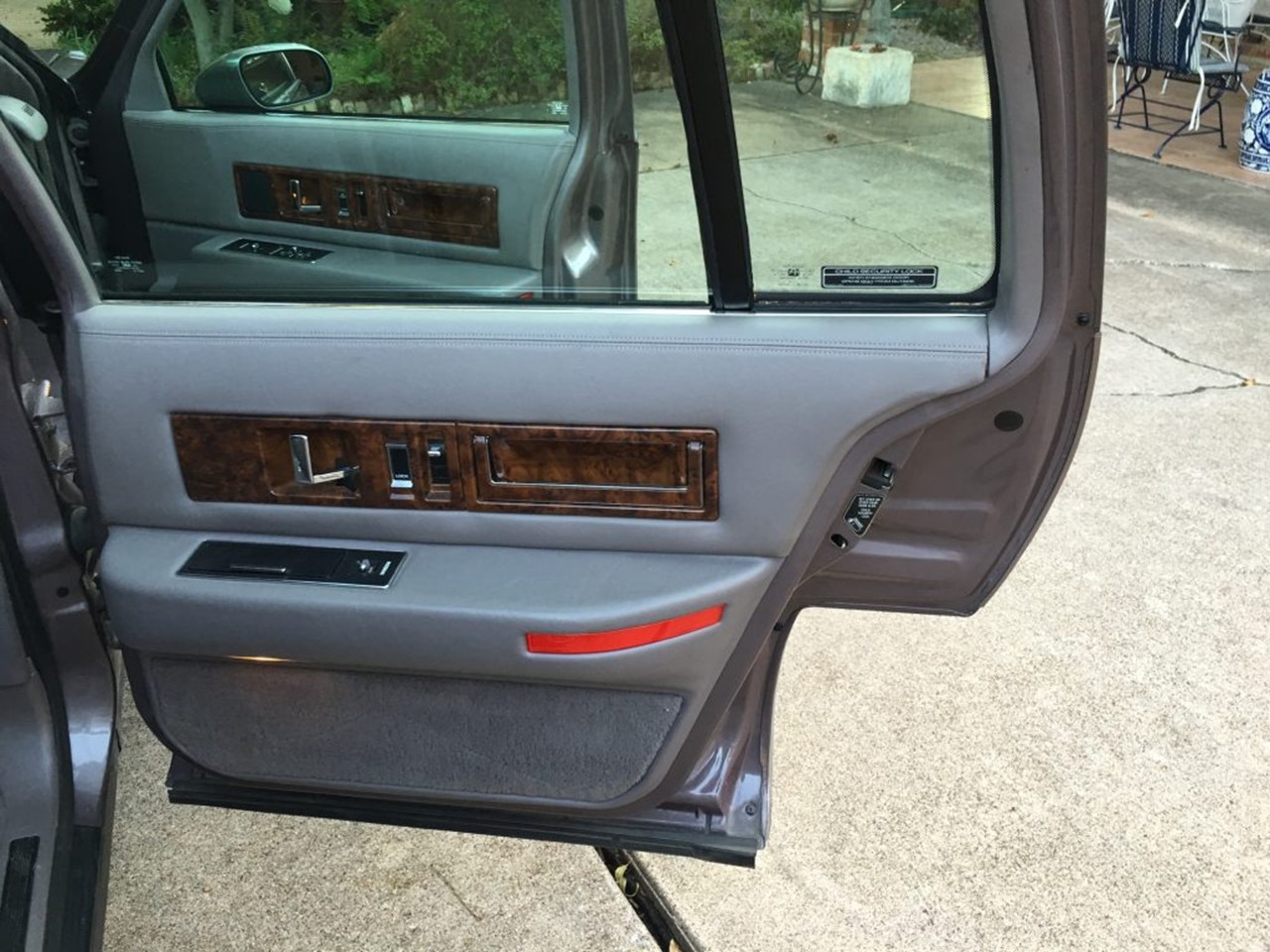 The 1994 Fleetwood Brougham goes to great lengths to satisfy the most discerning driver. Its luxury length of 225.1” is even longer than that of the 1994 Lincoln Town Car’s mere 218.9” length. Fleetwood’s wide 78” stance beats the Town Car’s 76.9” width proudly.

Fleetwood Brougham rides upon a long 121.5” wheelbase compared to Town Car’s 117.4” wheelbase. Fleetwood Brougham’s 57.1” height beats that of the Town Car at 56.9”. So you see…the Fleetwood Brougham and its poised dignity is eminently qualified to carry the title of America’s largest production passenger automobile for the 1994 model year – Cadillac Style!

With its full-size luxury, excellent road manners, and Cadillac elegance…the 1994 Fleetwood Brougham is traditional splendor that one had come to expect from the brand. The last of the Fleetwoods are big and beautiful from bumper to bumper. Their substantial body on frame construction is configured as front engine rear-wheel drive – as a true Cadillac should be.

This is General Motors last attempt building full-size cars. The big B/D body used by Chevrolet for the Caprice/Impala SS, Buick for the Roadmaster, and of course Cadillac with the Fleetwood. One advantage to a rear drive car is the ability to move the front wheels forward in its overall design. Placing the front wheels ahead of the engine greatly enhances suspension dynamics which govern stability. The engine doesn’t have to be connected. Drive shaft, rear differential, and rear suspension adds weight to the back of the car. (And NO torque-steer!) 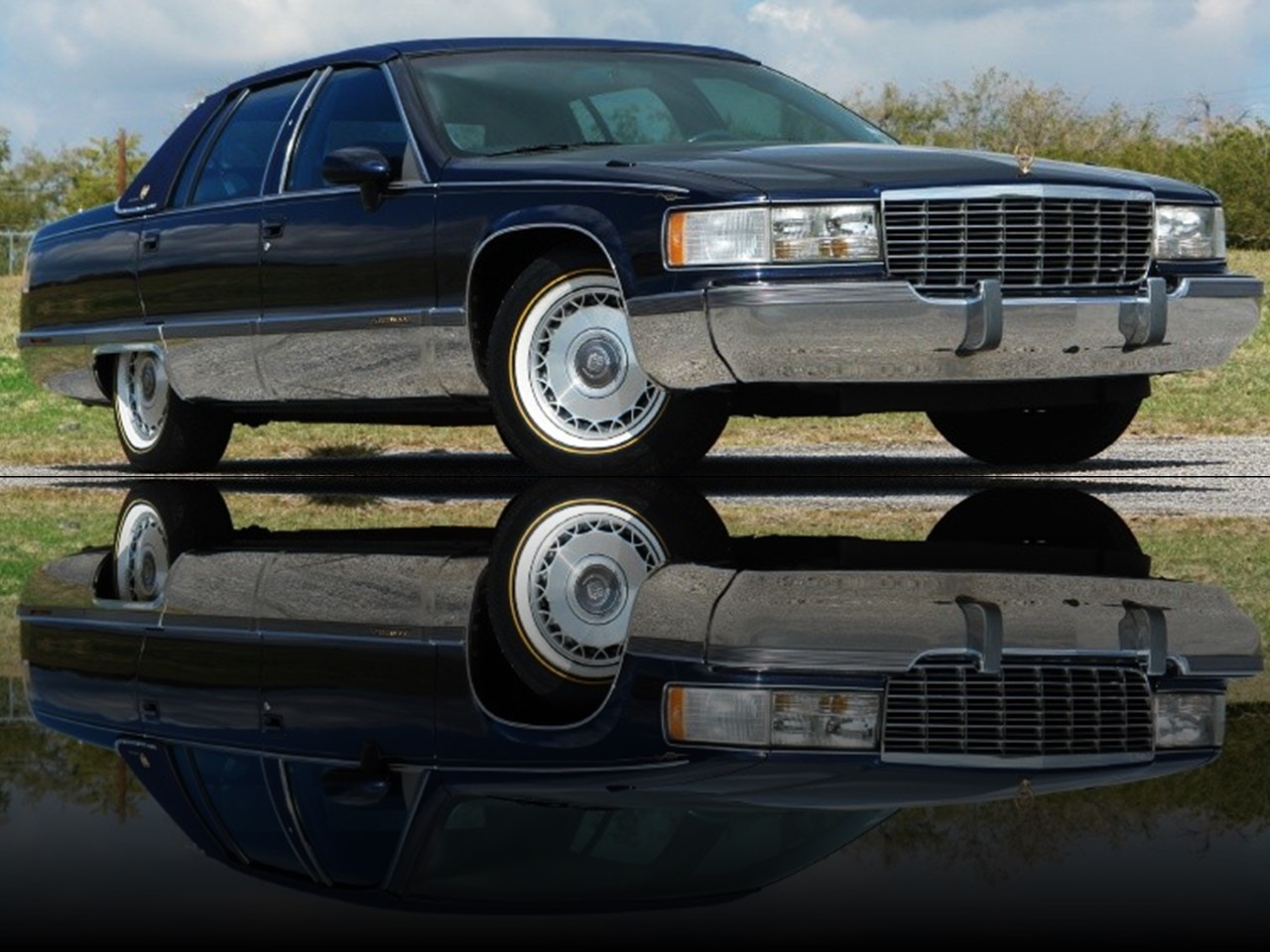 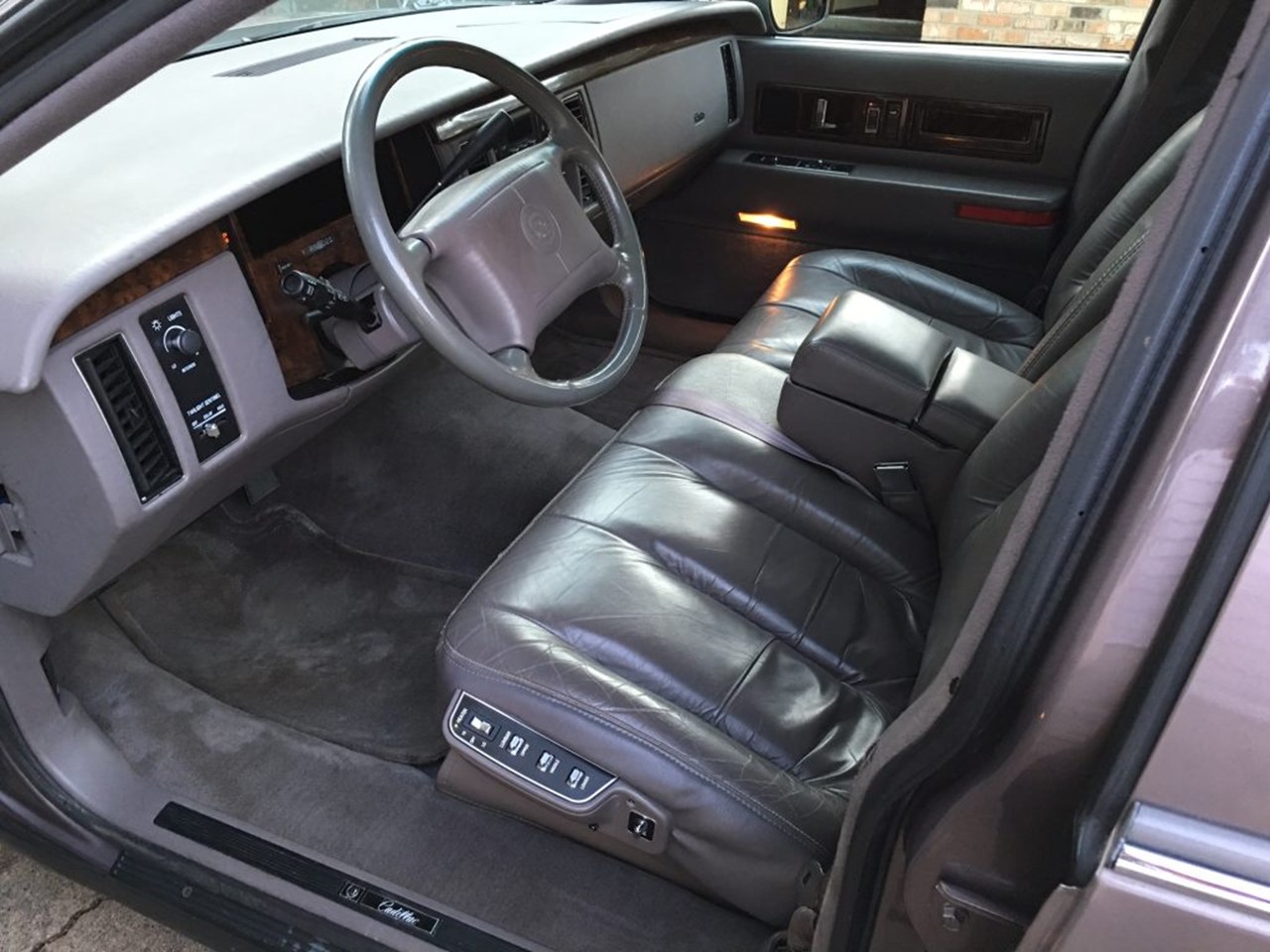 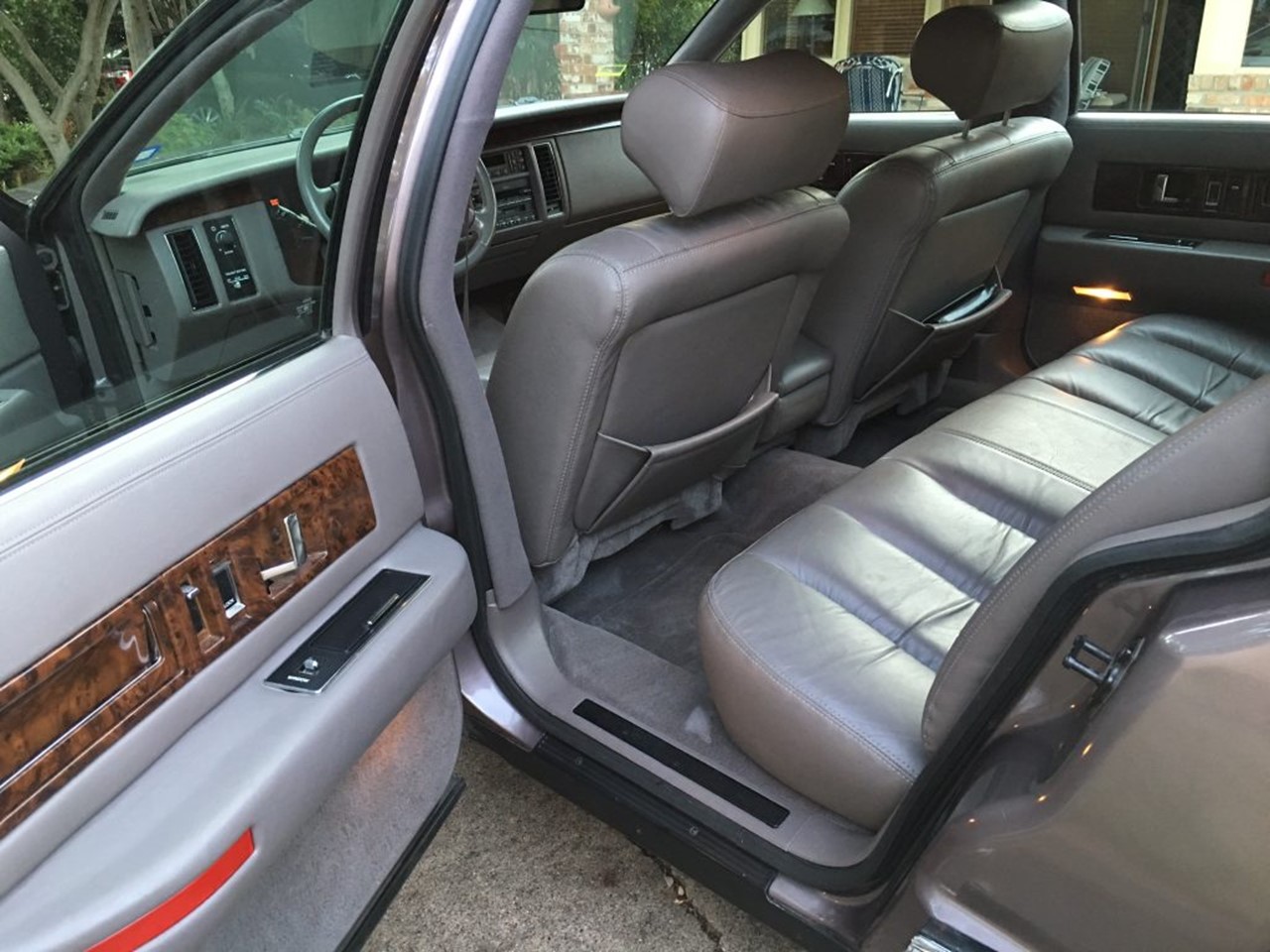 Fleetwood could be compared to a luxurious club room on wheels. Its spacious cloth or leather trimmed cabin was available in two distinctive trim levels. The standard Fleetwood sedan base priced at $33,990 – $34,615 is augmented by the optional “Brougham” luxury package.

The Brougham option upholstered with Prestwick knit cloth was $1680 while the leather trimmed version was $2250. This exclusive luxury package has a different seat cushion sew-style and upgraded appointments than the standard Fleetwood sedan.

The exterior is highlighted with a luxuriously padded vinyl roof treatment with “Brougham” nomenclature affixed to the rear sail panels. This deftly identifies it as Cadillac’s most luxurious owner-driven sedan. No other motorcar in its class can replicate the grandeur and dignity this supreme achievement in motoring offers. Passengers are ensconced in traditional 6-passenger comfort.

There’s room to stretch out with nearly 5′ of shoulder room. It has 38.7” of headroom available for front seat occupants and 39.1” for the rear passenger compartment. Fleetwood Brougham provides 42.5” of front seat legroom and 43.9” for rear seat passengers. Classic “Standard of the World” creations do not have to scream achievement…they simply whisper success. Fleetwood Brougham is renowned for legendary Cadillac comfort and convenience.

Brougham’s deep-seated luxury is due in no small part to Cadillac’s patented ‘split frame’ seatback and cushion design. The wide lounge-type seats provide independent adjustment. A new window defog system allows its windscreen to be cleared in cold weather while maintaining heat flow to the lower portion of the cabin. They don’t refer to a Fleetwood Brougham as “The epitome of luxury” for nothing… 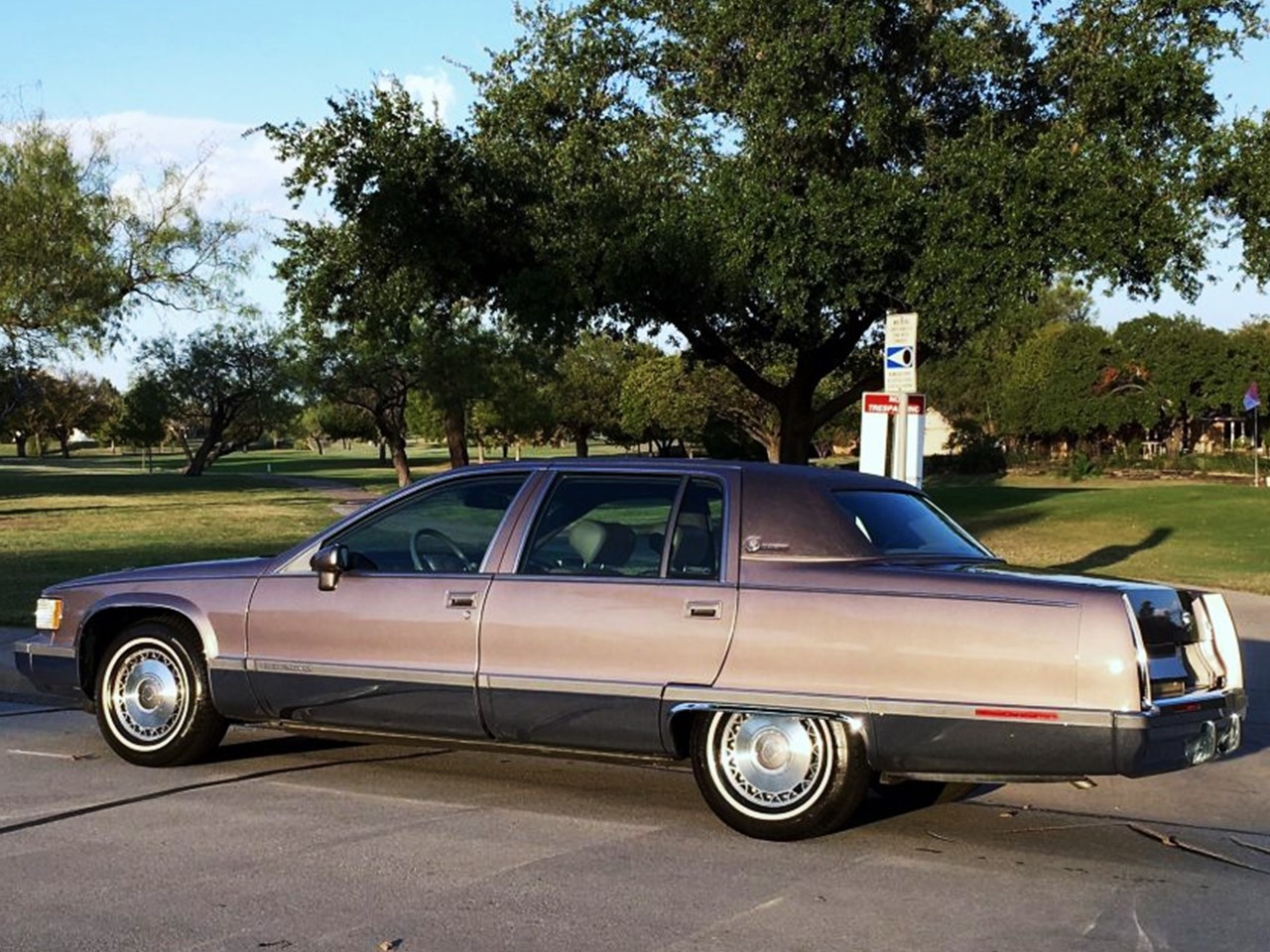 What do these two cars have in common? 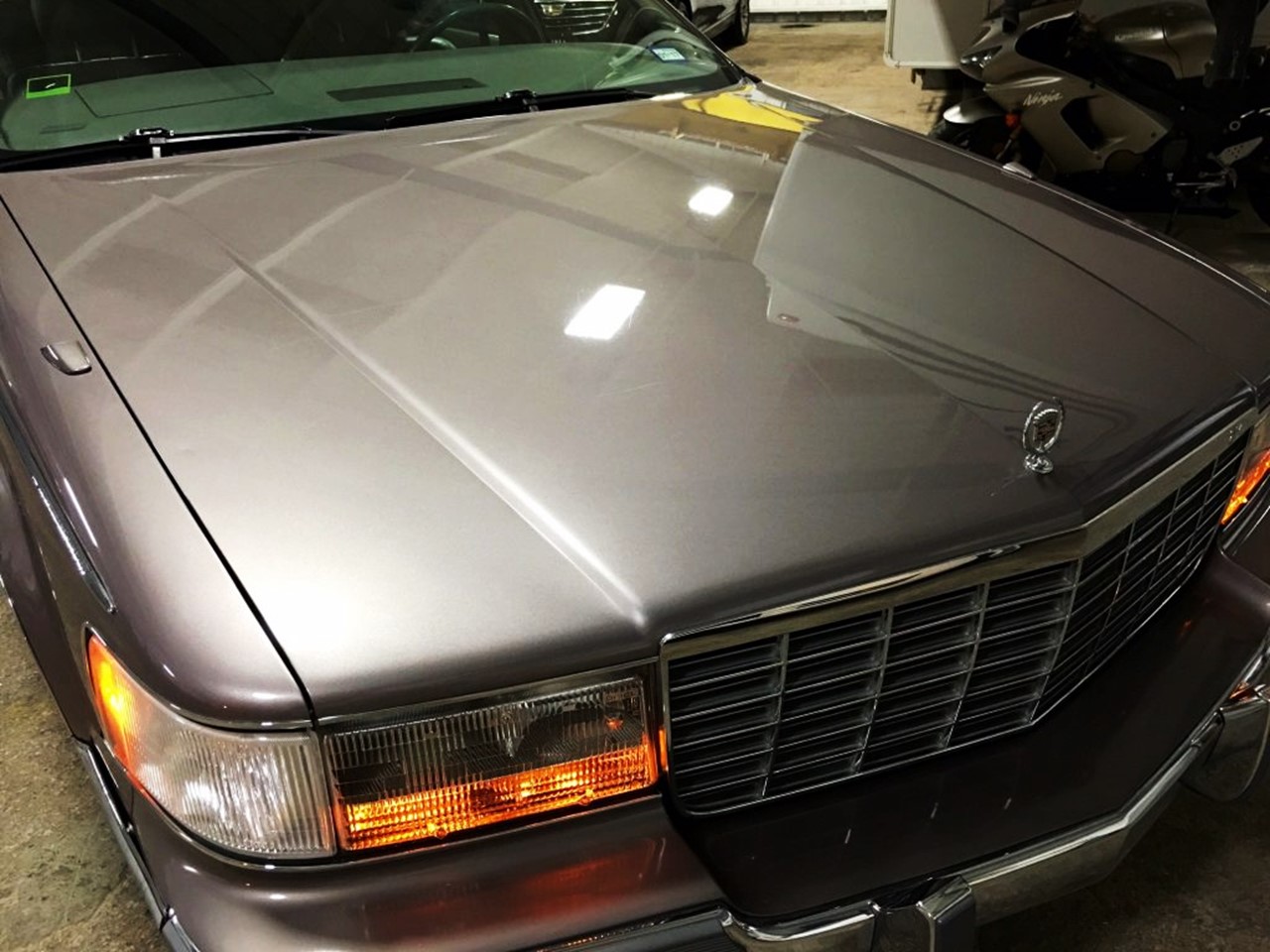 The 1994 Fleetwood Brougham and the 1994 Chevrolet Corvette share a startling truth. The Cadillac Fleetwood’s power is derived from Corvette’s responsive new 2nd generation 5.7 litre 16-valve, 350 CID “LT1” V8 engine. Both Cadillac and Corvette versions are built with a cast iron block. The Vette is built with aluminum heads while Cadillac uses cast iron heads. Here’s a Cadillac with the heart of Corvette! The naturally aspirated engine is equipped with electronic sequential-port fuel injection. Dual-platinum tipped spark plugs require no scheduled tune-up for 100,000 miles. (Burn a good grade of premium fuel and you can go a lot farther than the captioned number) 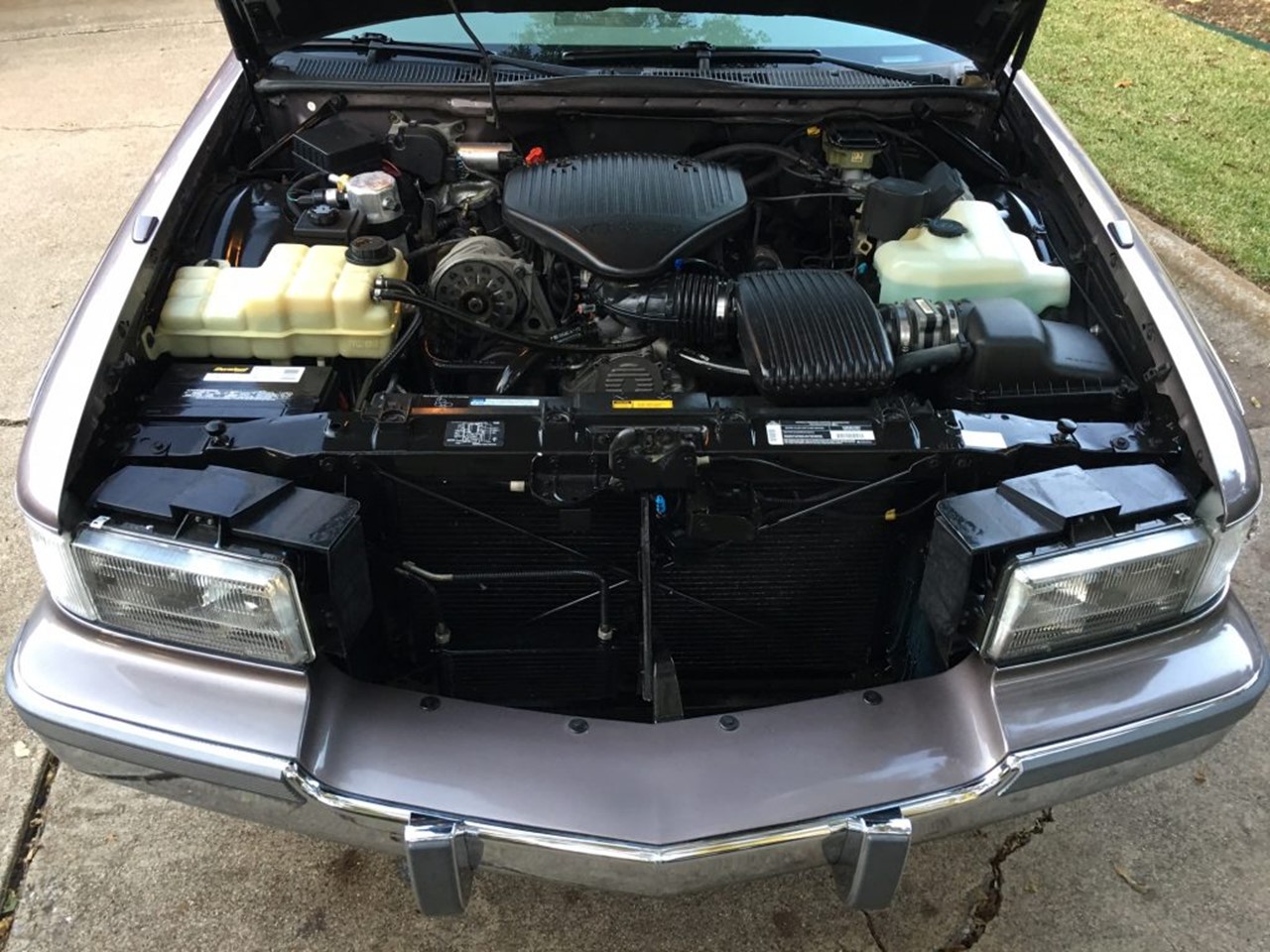 Many thanks to Jim Hailey!

When one takes into consideration, luxury sedans such as the Fleetwood Brougham and what the brand builds today…it seems as though Cadillac has forgotten its loyal following, the same following that helped catapult the brand to the eminent status of “Standard of the World.”

The full-size Fleetwood was the first choice among bespoke coachbuilders for stretch limousines and professional vehicles of distinction. It was the largest regular passenger production automobile available in America for the genre. When the Fleetwood Brougham ceased production, it left coachbuilders without a traditional-size platform…

Spirited performance is just a tap of the accelerator pedal away. Deep within this elegant sedan beats the heart of a sports car. Corvette’s formidable 5.7 litre LT1 V8 engine assures responsive acceleration with extra power in reserve. Spacious six passenger accommodations, myriad standard comfort/convenience features and accessories, and that inherent Cadillac-Style makes the majestic Fleetwood Brougham a rare commodity in today’s mass-production euphoria. The bottom line: “Life’s not a cabaret…it’s a Hallmark card.” The 1994 Cadillac Fleetwood Brougham is another successful chapter…in the continuing saga of “As the Standard of the World Turns.” 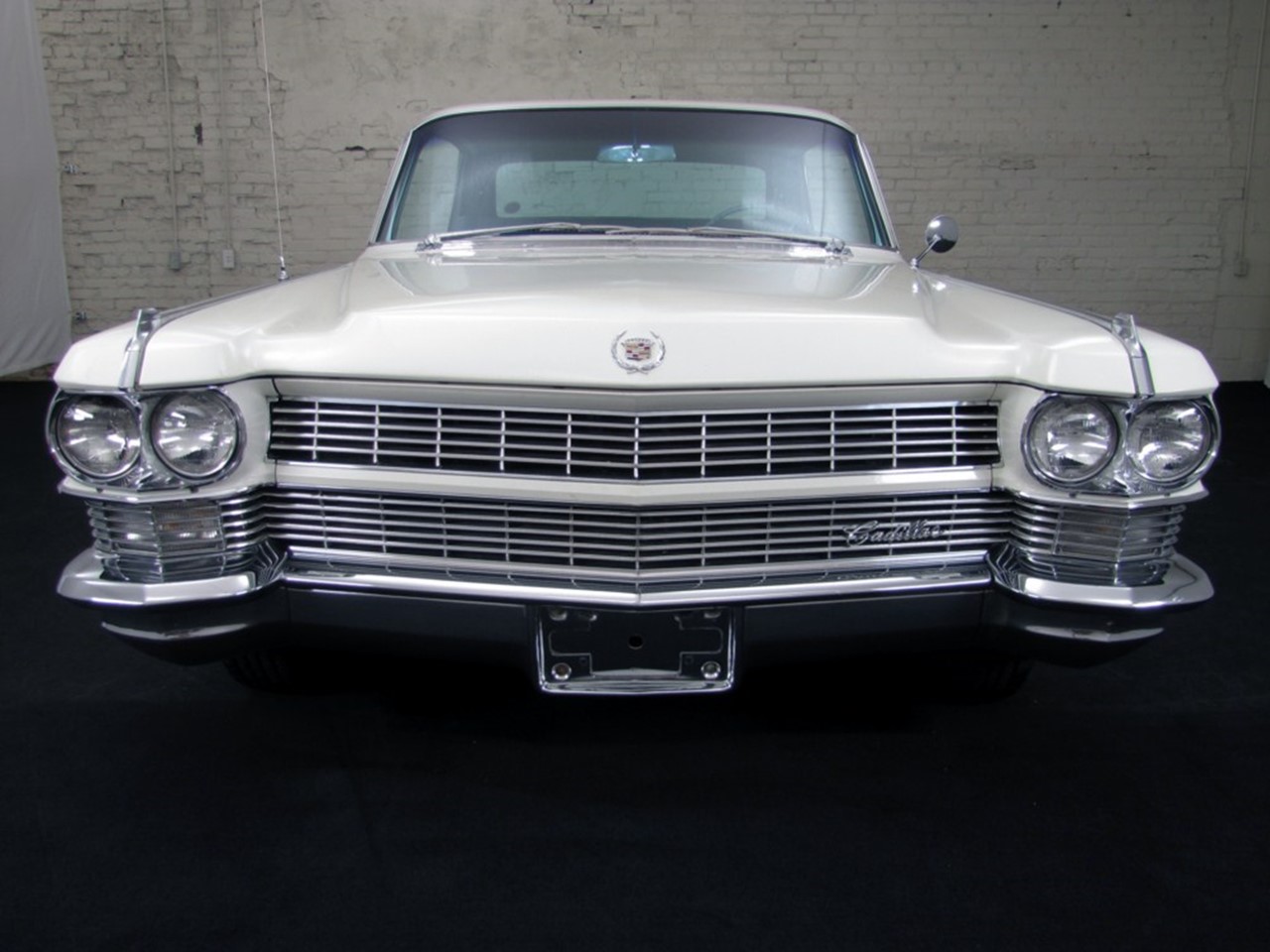 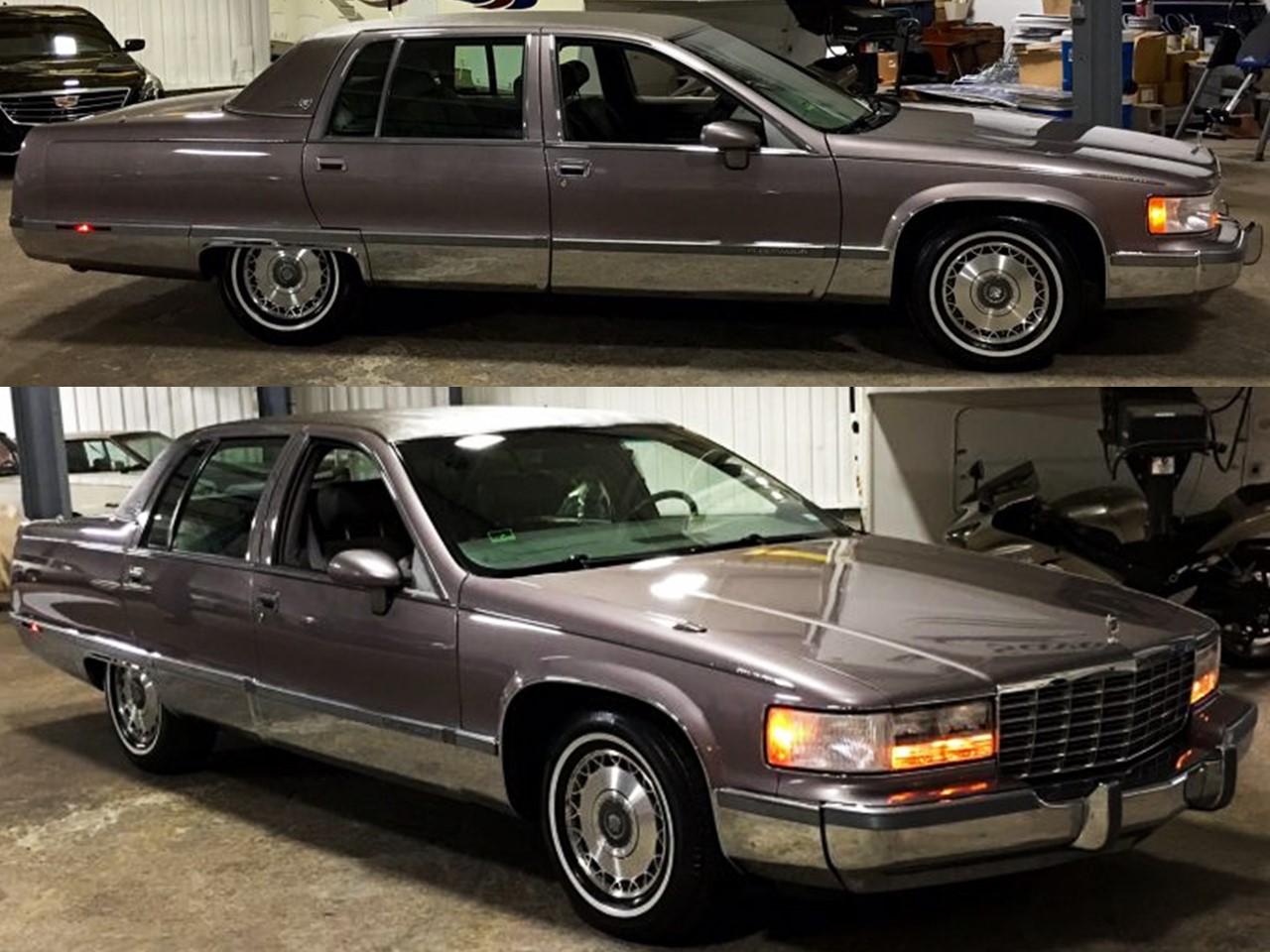 Welcome to Greg’s World of NotoriousLuxury © 2017

"As the Standard of the World Turns", Cadillac, Cadillac: Masterpiece from the Master Craftsmen, Classic American Marques