The pride of the UK…envy of the world

The quality will remain long after the price is forgotten

Charles Stewart Rolls (1877-1910) and Sir Frederick Henry Royce (1863-1933) 1st Baronet of Seaton were obsessed with quality, fit & finish. Perfection was a way of life, not an afterthought. Their impetus…”Take the best there is and make it better.” The very first Rolls-Royce automobile – the Rolls-Royce ’10hp’ was introduced December 1904 at the Paris Salon. This was the birth of a legend. A Rolls-Royce is the most distinguished brand in automotive history. The Silver Cloud series epitomized the brand from 1955 until the end of its production in 1966.

A formal partnership was created in 1906 from “Rolls and Royce” to “Rolls- Royce Limited” with Charles Stewart Rolls appointed as technical managing director. He funded the company to compliment Sir Henry Royce’s technical expertise. Sir Henry was fascinated by anything mechanical. In 1907 Rolls- Royce Limited bought out C.S. Rolls and Company, one of Great Britain’s first car dealerships. It was located in the London Borough of Hammersmith and Fulham SW6 in southwest London, England. The dealership sold the French Peugeot and Belgium’s Minerva vehicles. Rolls-Royce began winning awards for quality and reliability of their cars by 1907.

From its inception, this iconic brand has been a motoring superlative internationally. There is no other automobile in the world that exhibits one’s success and stature more eminently than a Rolls-Royce. It has always been the epitome of luxury and elegance. The Silver Ghost earned the title of “The silent motorcar” and was built from 1906 until 1925. This car began the tradition of excellence that still exists today. Following the Silver Ghost was the Phantom, Wraith, Silver Wraith, and Silver dawn…all equally luxurious with meticulous fit & finish.

It is the formidable Silver Cloud series that catapulted the brand to world-wide notoriety and success. It is the single most immediately recognizable automobile in history. This iconic model appeared in various forms of the media representing the good life. The incomparable Silver Cloud was built in three elite series: Silver Cloud I, Silver Cloud II, and Silver Cloud III. They were built in many different coachbuilt body styles as well as the standard steel saloons. All Rolls-Royce motorcars have a history book that follows the car through its production being signed by each technician that crafted the car. 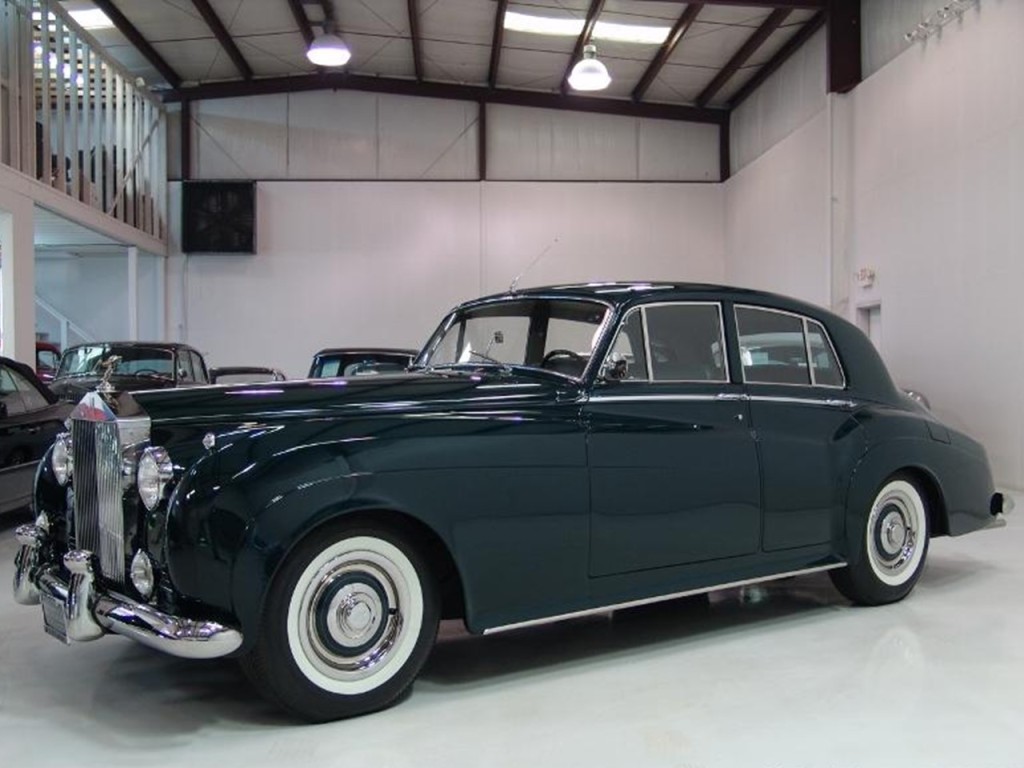 The beauty of the Silver Cloud series was its versatility. They were built as body on frame construction which allowed coachbuilders to create highly bespoke vehicles of distinction. The Pressed Steel Company of Great Britain built the bodyshells. The Silver Clouds were built with stressed steel bodies fitted with aluminium doors, bonnet, and boot lids. The standard steel saloons measured 212” in length and rode upon a 123” wheelbase. Long wheelbase versions added 4” to the wheelbase. It was added to the rear doors affording more space in the rear compartment. With the anonymous integration of the added length, it retained the Silver Cloud’s original design.

The Silver Cloud III included refinements from the previous two series. It can be more readily identified by quad headlamps, and a slightly lower bonnet & radiator grille. The silver Cloud III was built from 1963 until 1966. There were 2,044 built as standard saloons, 206 long wheelbase variants, and 328 coachbuilt versions. These custom-crafted coachbuilt versions were built as coupes, convertibles, hearses, and limousines.

The Silver Cloud III was equipped with the Rolls-Royce 6.2 litre V8. Enhancements to the engine included a nitride hardened crankshaft. There were issues with early Series II models with breaking crankshafts due to the lack of lubrication to the bearings. This 6.2 litre V8 was introduced for the Series II models and wasn’t as smooth and quiet as the former 4.9 litre in-line 6-cylinder engine. It was also cramped into the engine bay as it was designed for a narrow engine block. In fact, the front right wheel had to be removed in order to replace the spark plugs. Another refinement to the 6.2 litre V8 was its higher 9:1 compression ratio for the use of higher octane levels of premium fuel. GM’s Hydra-Matic transmission was the new medium for the transfer of power to the road. 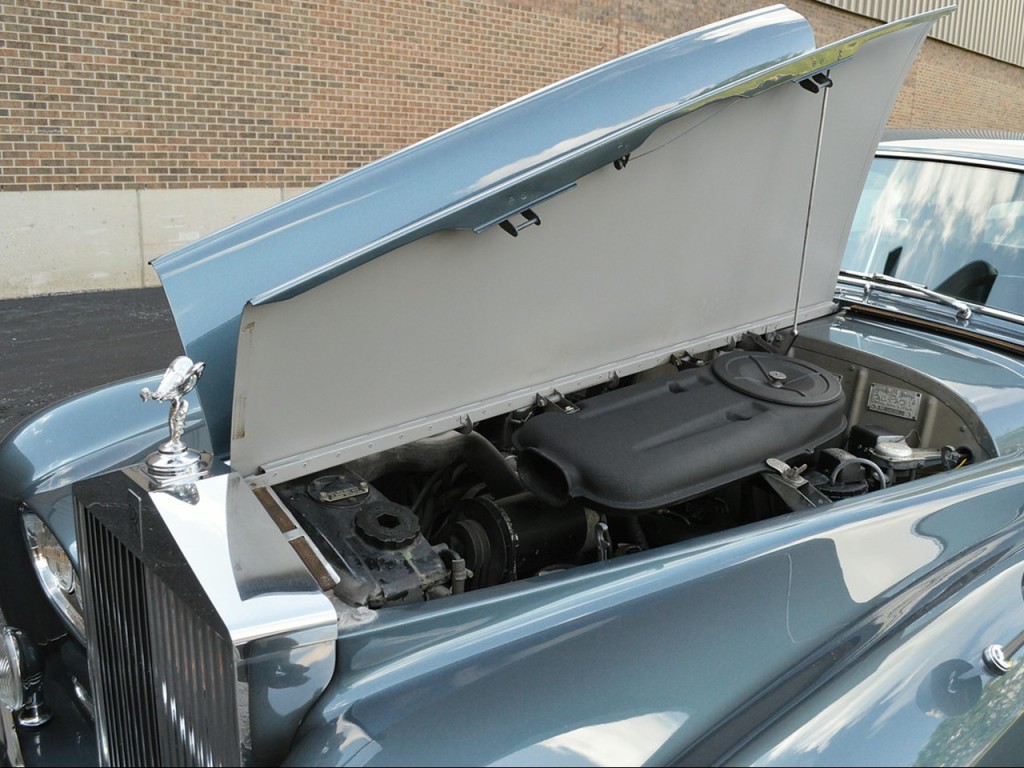 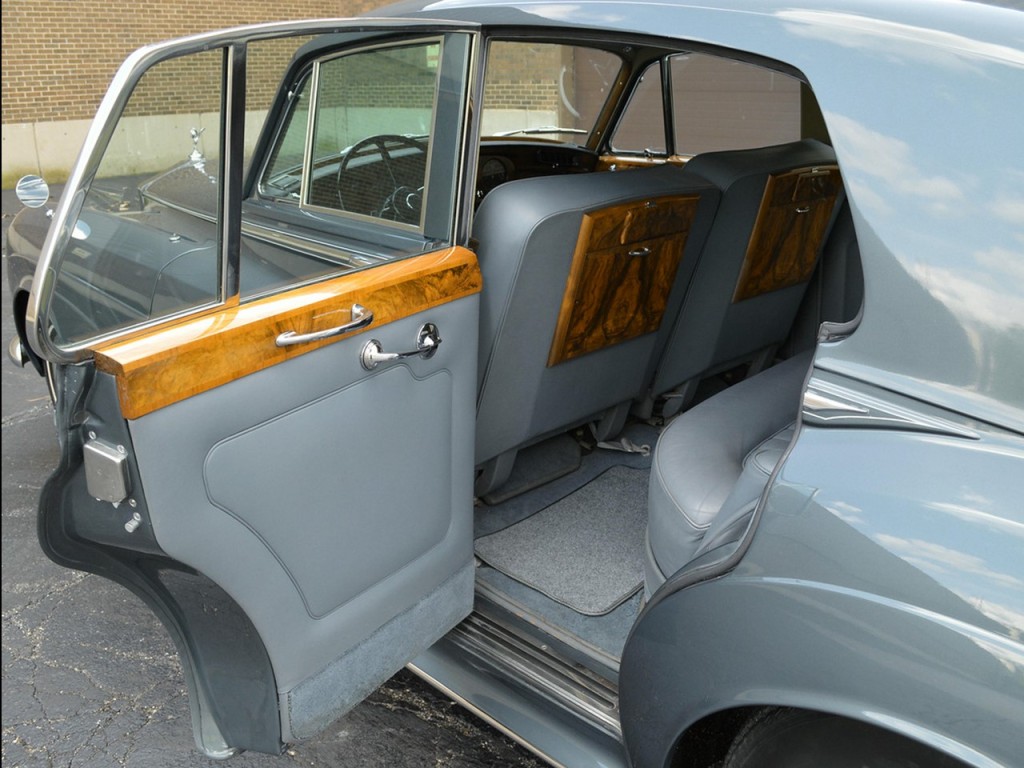 Inside the Silver Cloud III, opulence abounds. Hand-polished wood veneers accent the dash and door capping rails. It takes at least eight invisibly joined slivers of wood to make the veneers. Rolls-Royce has experts that travel to Milan, Italy – a city renowned for its market in wood veneer of the highest quality – to obtain the materials for the next year’s production run. The craftsmen spends hours carefully building the veneers, then they create a pattern of which no two cars will ever share. It then takes hours of hand-polishing that follow the lacquer that makes the wood shine like glass. The veneers are mirror-matched to reflect the opposite side of the cabin. A piece of the veneer is kept on file in the event the original is damaged. In the construction of the best car in the world…there is no room for compromise – “Nil fato relinquemus.” 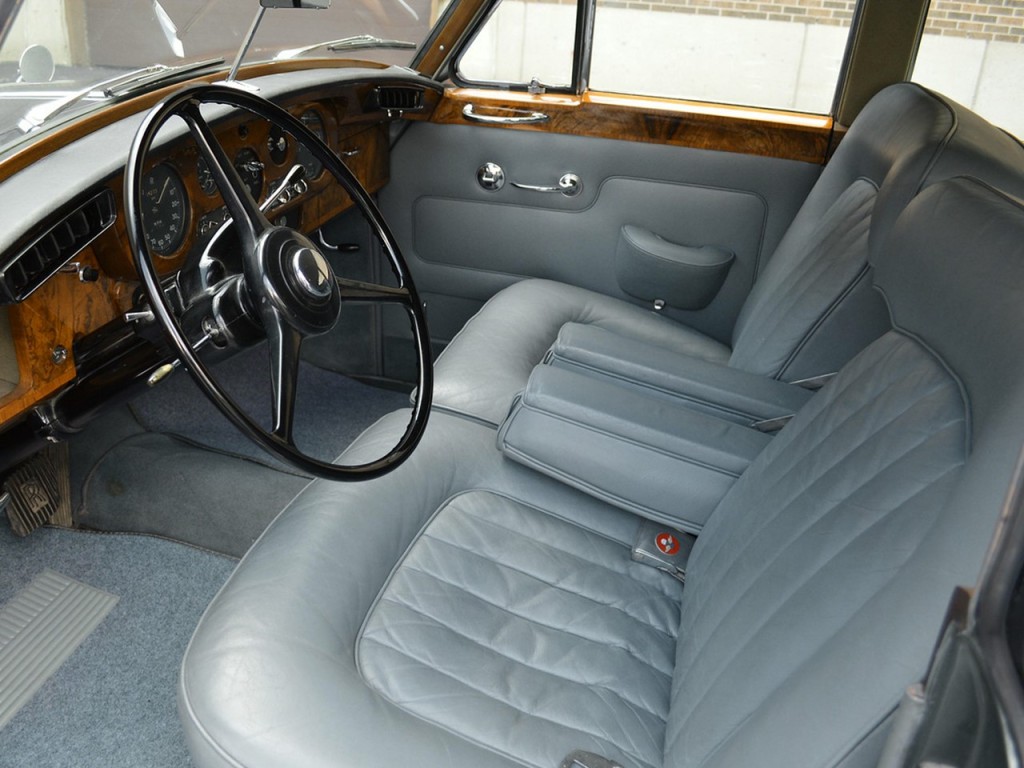 The aromatic scent of natural grain leather wafts through the cabin. The wider front seats were upgraded for the 1964 model year. Connolly Brothers – the masters of the art – takes only the finest hides to create upholstery that rivals fine European furniture. It takes up to 10 perfectly matched hides to create the upholstery for a Rolls-Royce. The same leather is used to pipe the carpets. Hand-cutting, hand-stitching and finishing is done painstakingly slow to create unparalleled elegance. The rejected hides end up as expensive leather goods such as ladies hand bags, shoes, and belts. 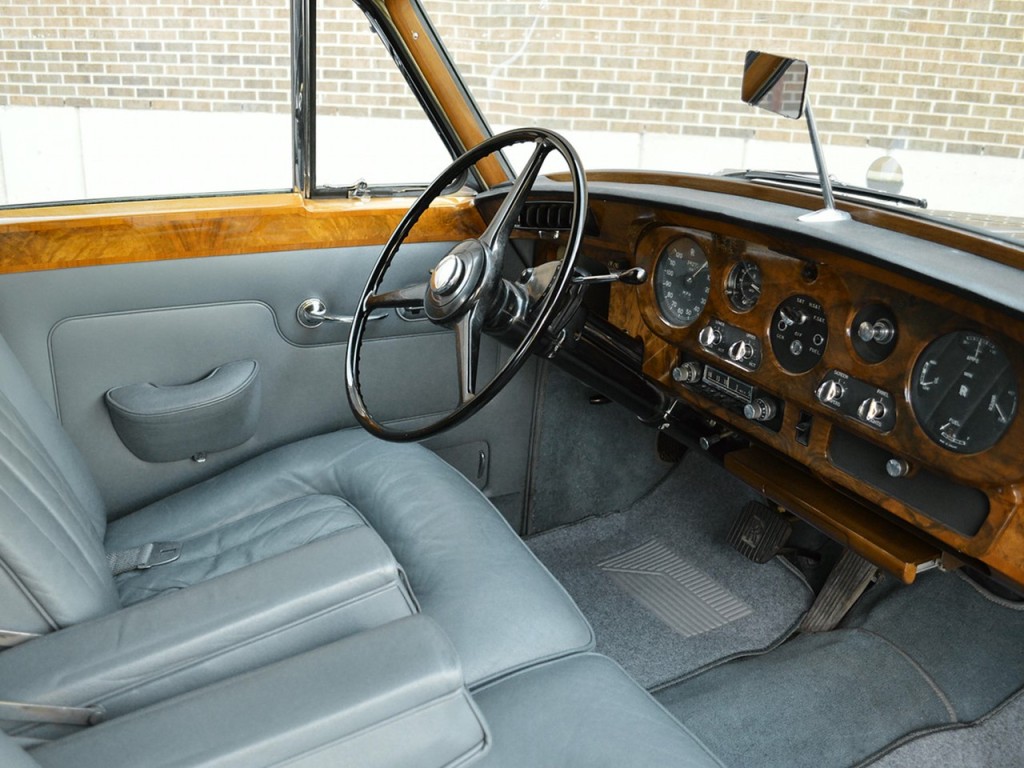 Under foot…luxuriously under foot…are Wilton hand-tufted wool carpets. They are so decadently luxurious they resemble velvet. The carpet padding not only insulates sound, but also makes the carpet deep and luxurious. For the pièce de résistance…lambswool mouton rugs, just like the type in opulent living rooms, are an attractive option. A Rolls-Royce cossets its occupants in first-class luxury. 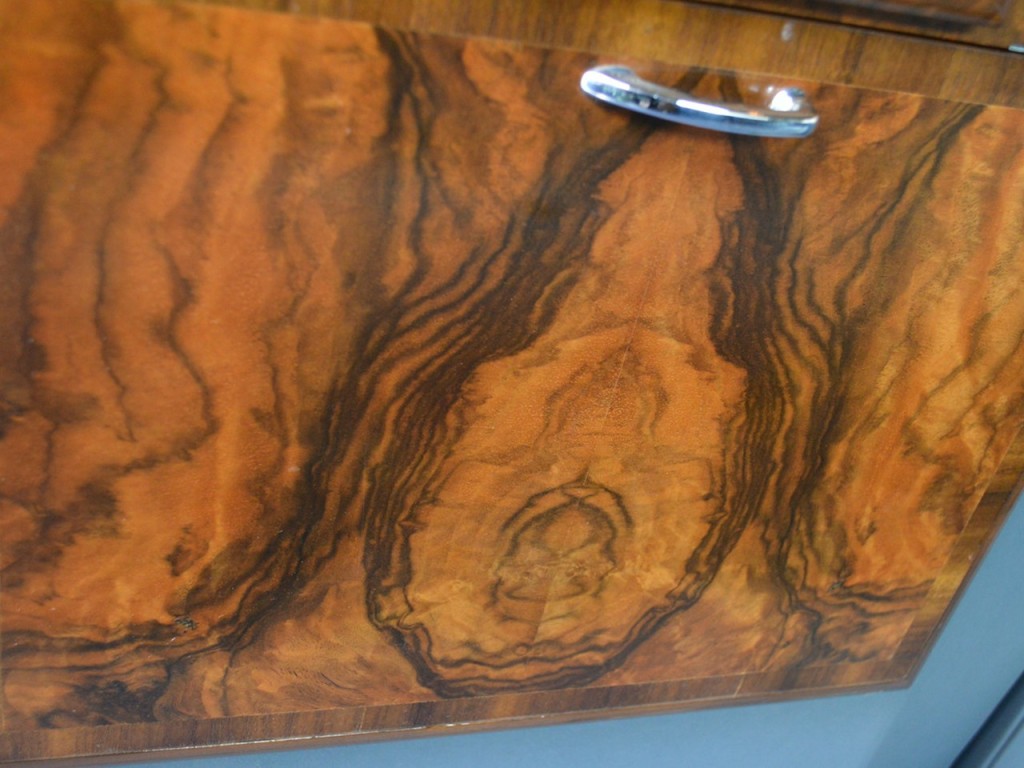 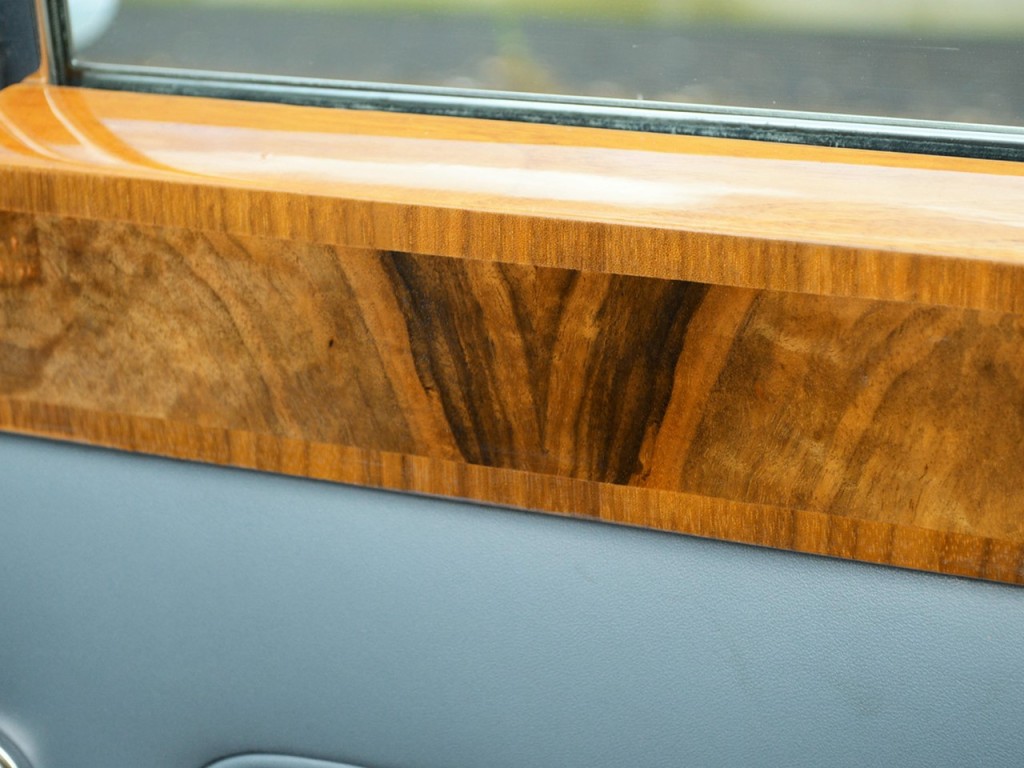 The cabin is so quiet…”whisper…tick…soar, the loudest sound you will hear in a Rolls-Royce is the beating of your heart.” Nylon gears in the window mechanism silences their operation. The electric seats “glide” in silence, all switches and controls virtually make no sound whatsoever… special touches such as these are why a Rolls-Royce is the pride of the UK and the envy of the world. Once the vault-like doors are shut, the Rolls-Royce ambiance becomes apparent. Welcome to another world…in these hurried mass-produced times…there is one thing that will not compromise…a Rolls-Royce – 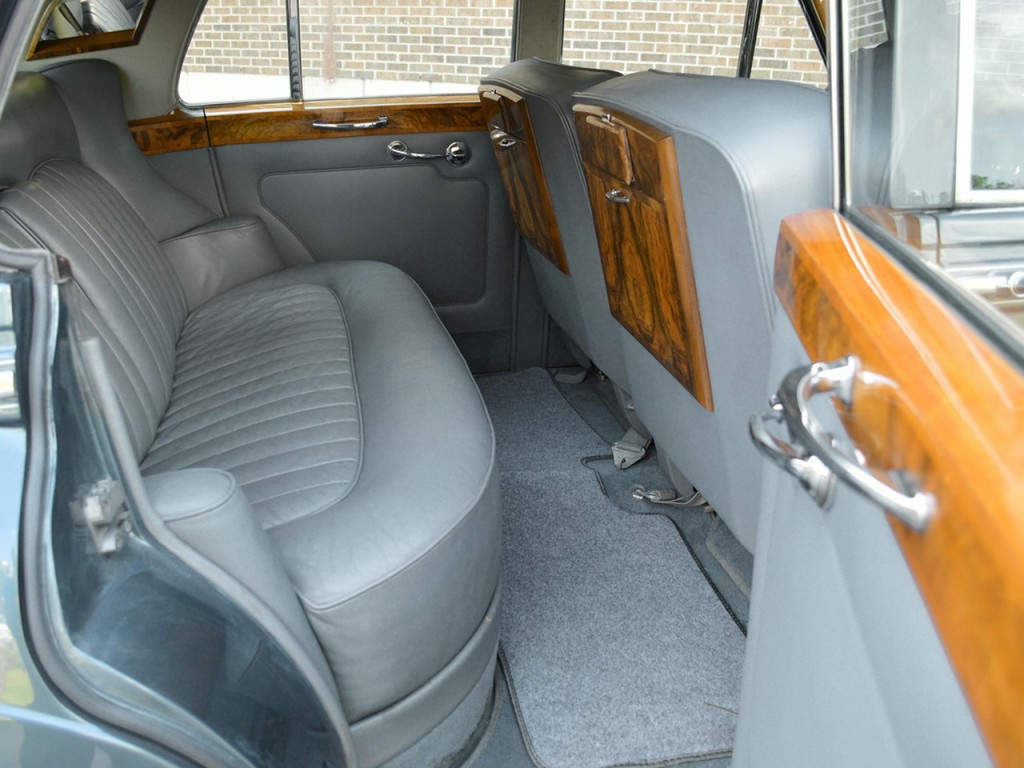 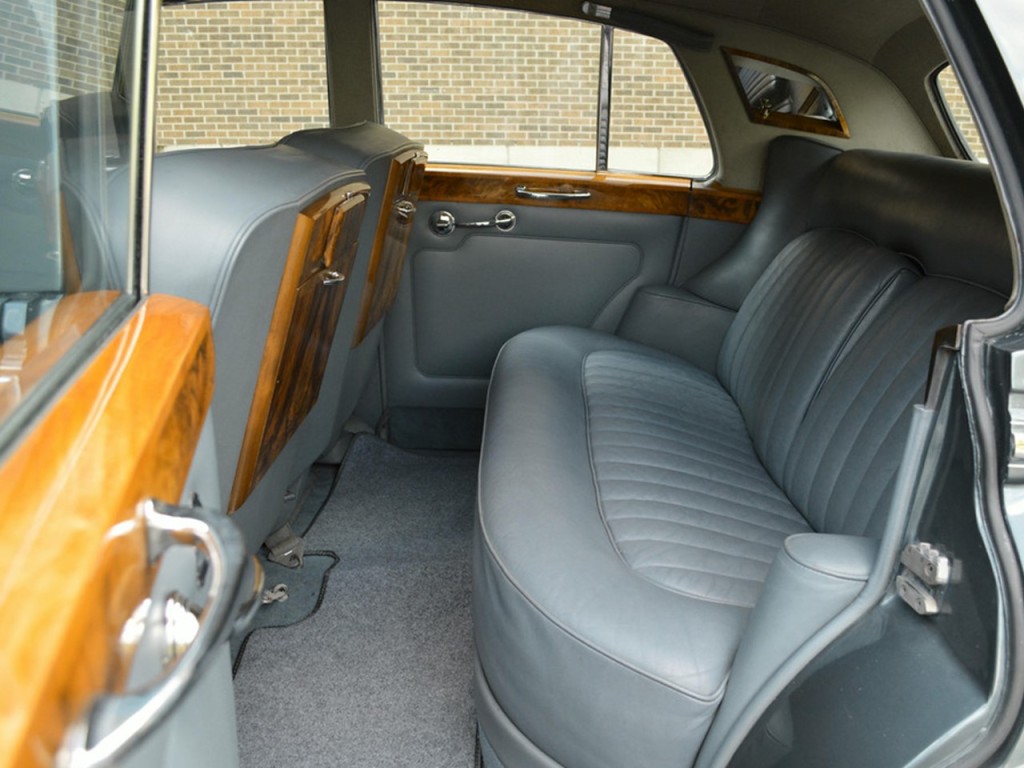 The Silver Cloud III has a stately demeanor associated with its exterior design. Every curve, and each contour is done completely by the hand and the eye. It took anywhere from six to eight months to build just one Silver Cloud III. Before the bodyshell received its first coat of primer, a craftsman did nothing but study the surface by hand. Ultra violet lighting is also used to find flaws and imperfections. After the first coat of primer is applied, a different craftsman would hand rub the body circling imperfections with a grease pen. It takes over 55 hours just to prepare the naked steel body for painting. 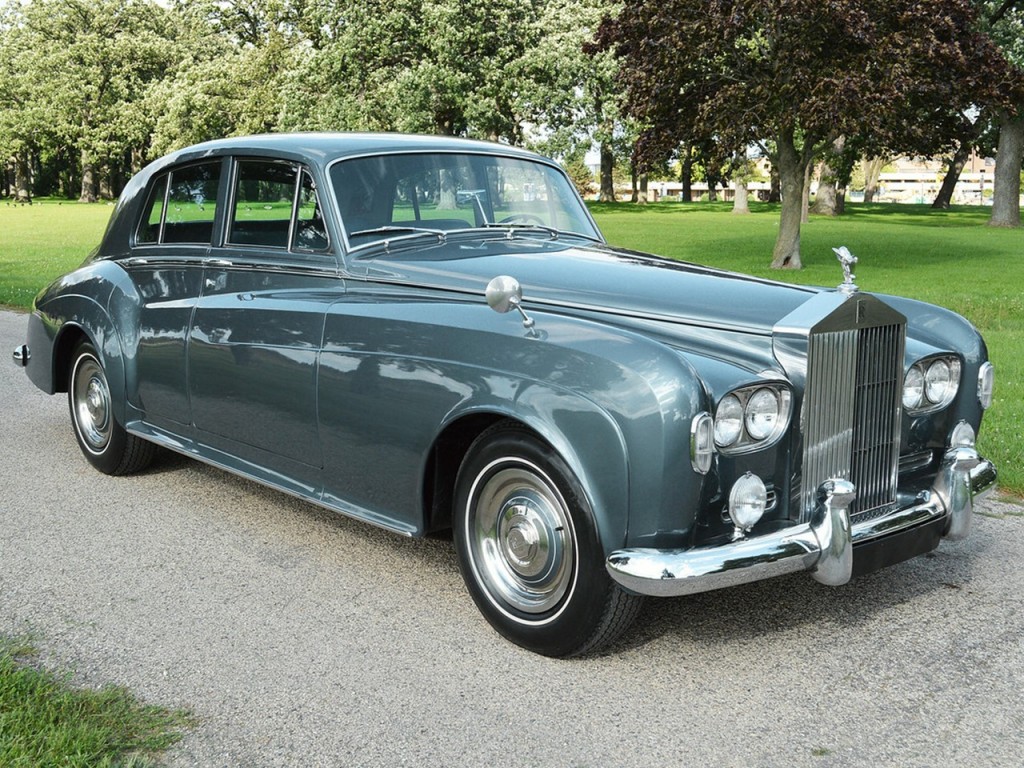 The bodyshell is stripped, the imperfections are remedied followed by more primer. It isn’t until the craftsmen are completely satisfied, that it receives its first coat of the pigment color. After the base coats are applied the bodyshell is baked and more hand-polishing is done. Between each application, there is extensive hand-polishing. This is why a Rolls-Royce shines with such depth. Many coats of paint are applied depending upon the color itself. Many, many hours of hand finishing are clocked until that Rolls-Royce shines as a Rolls- Royce should. Much of the same handwork can be found in today’s Rolls-Royce. Some things will never change… 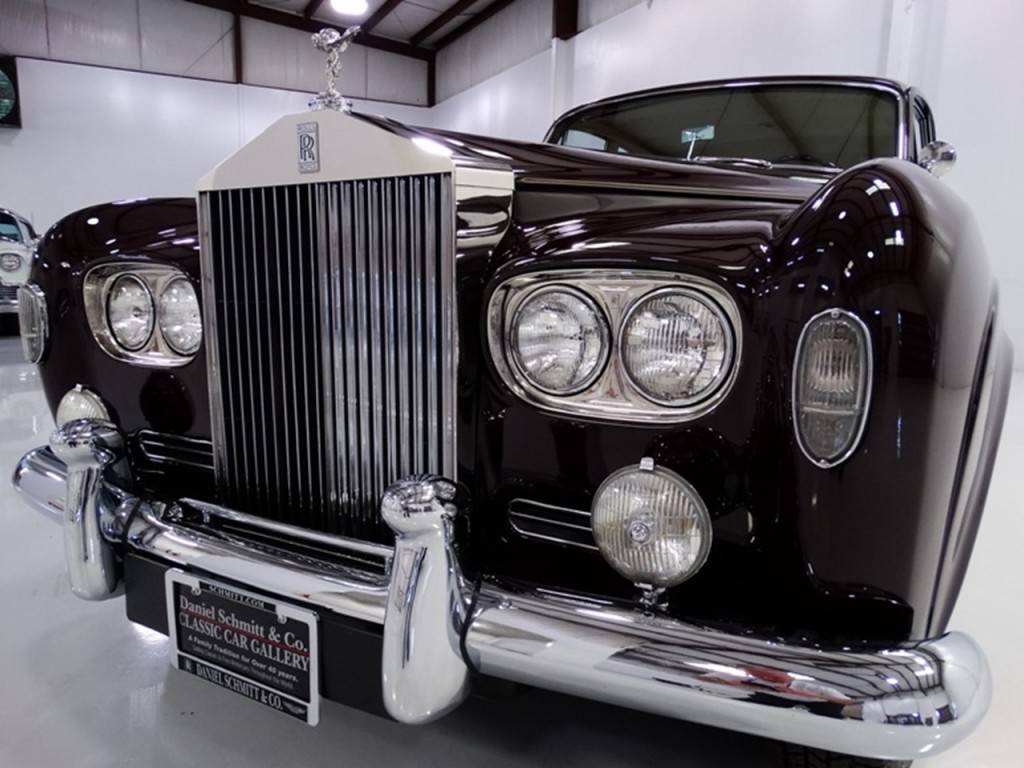 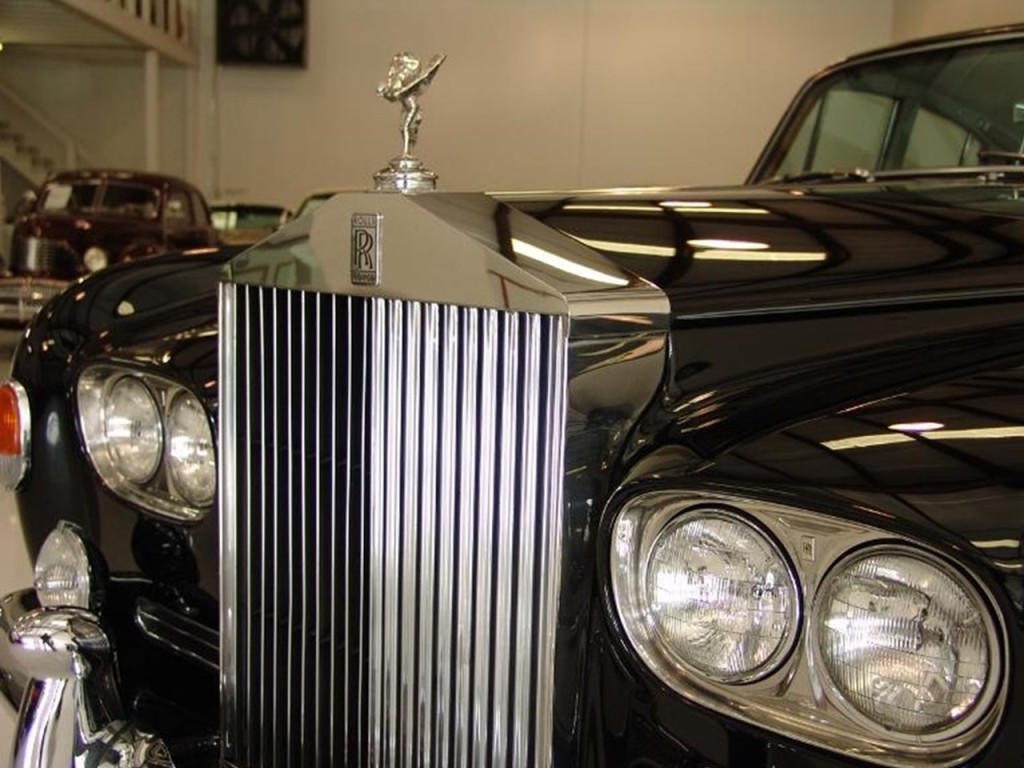 The classic radiator grille is built completely by hand using the same technique as was used to build the Parthenon in ancient Greece. A process called entasis is used to make each line in the grille to look perfectly rectilinear by making each line slightly bowed. It takes one man almost an entire day to soft soldier the almost invisible joints between each of the eleven pieces of hand formed stainless steel that forms the main structure of the grille. After the grille has been built it is polished for up to five hours. It is only then that the “RR” badge is attached. Each grille is initialed by the craftsman that built it, should it ever become damaged it could be repaired by the person that created it. 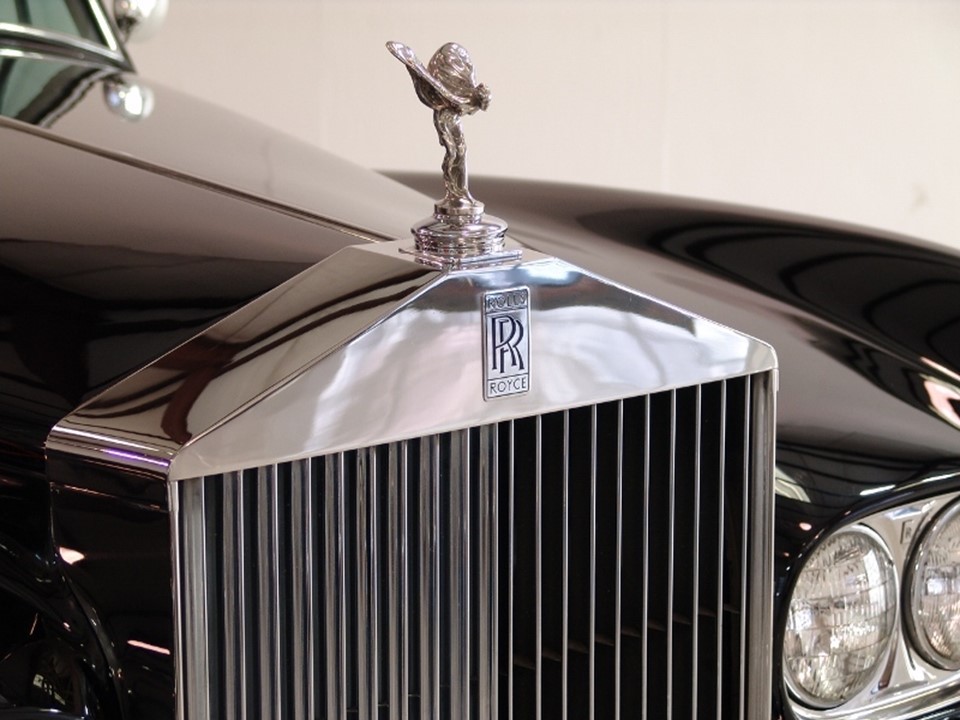 The Spirit of Ecstasy is the symbol synonymous with motoring excellence. It is the crowning glory of a Rolls-Royce. Around 1910 the directors of Rolls-Royce became dismayed to find a number of owners had used a strange variety of mascots to adorn the Rolls-Royce radiator grille. A Rolls-Royce is meant to be as beautiful as possible. In 1911 Claude Sykes was commissioned to create the beautiful Spirit of Ecstasy. It was designed to deter the use of grotesque figurines to top the classic radiator grille. It won a first prize gold medal for the best motorcar mascot in the world in 1920. 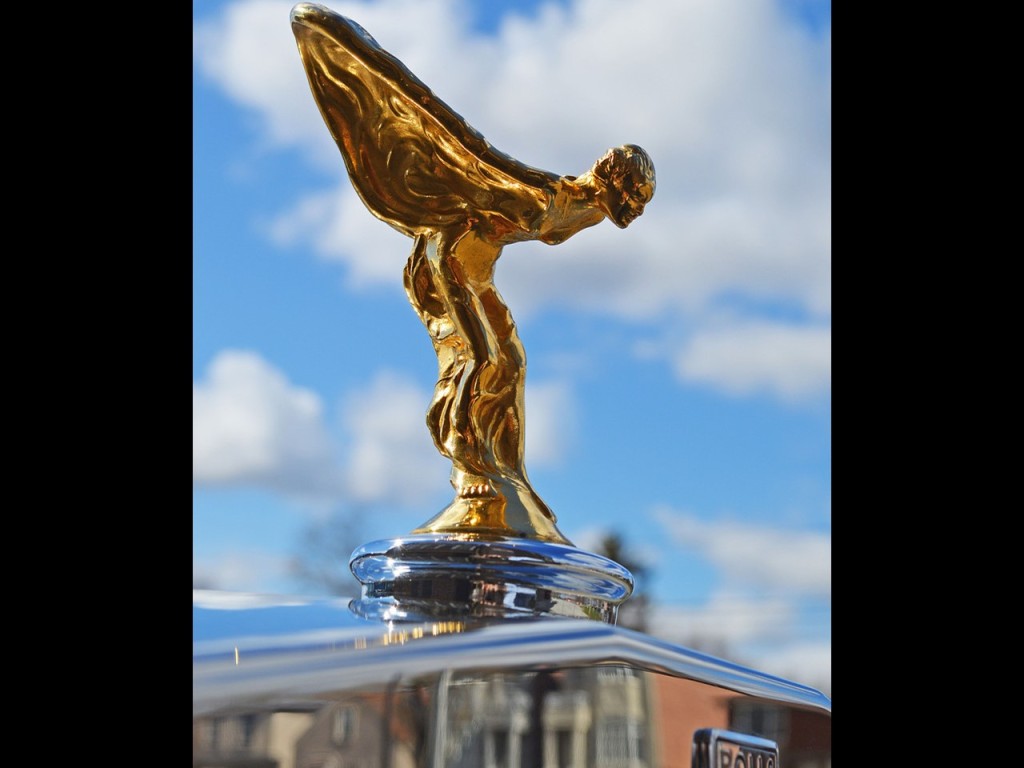 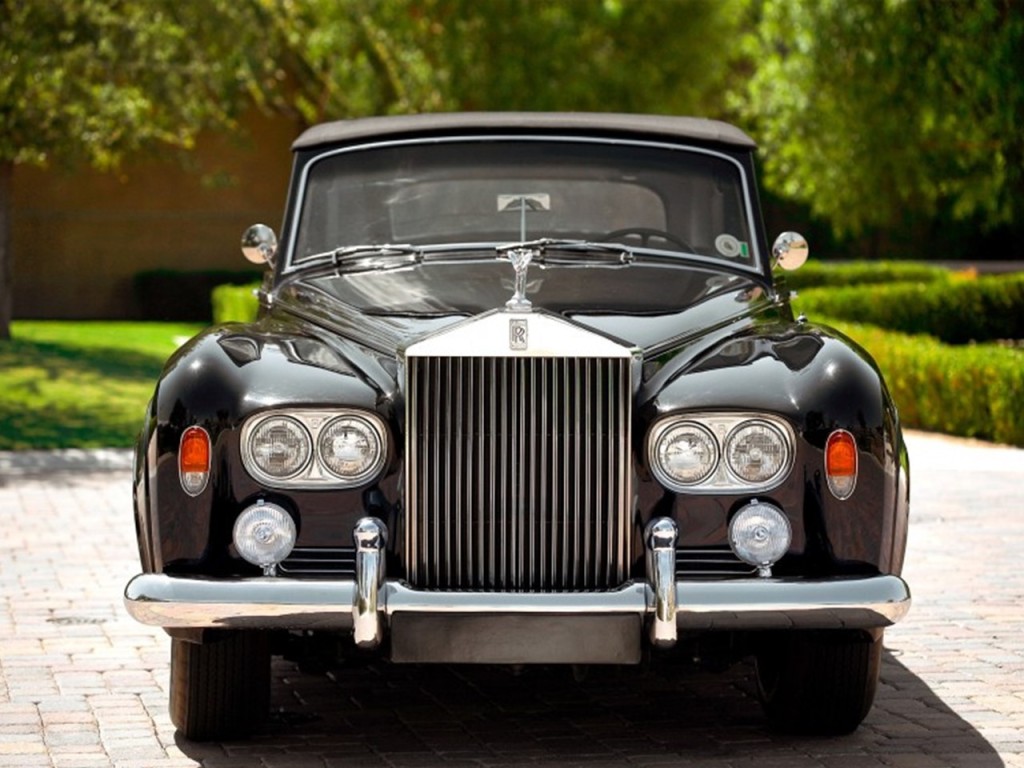 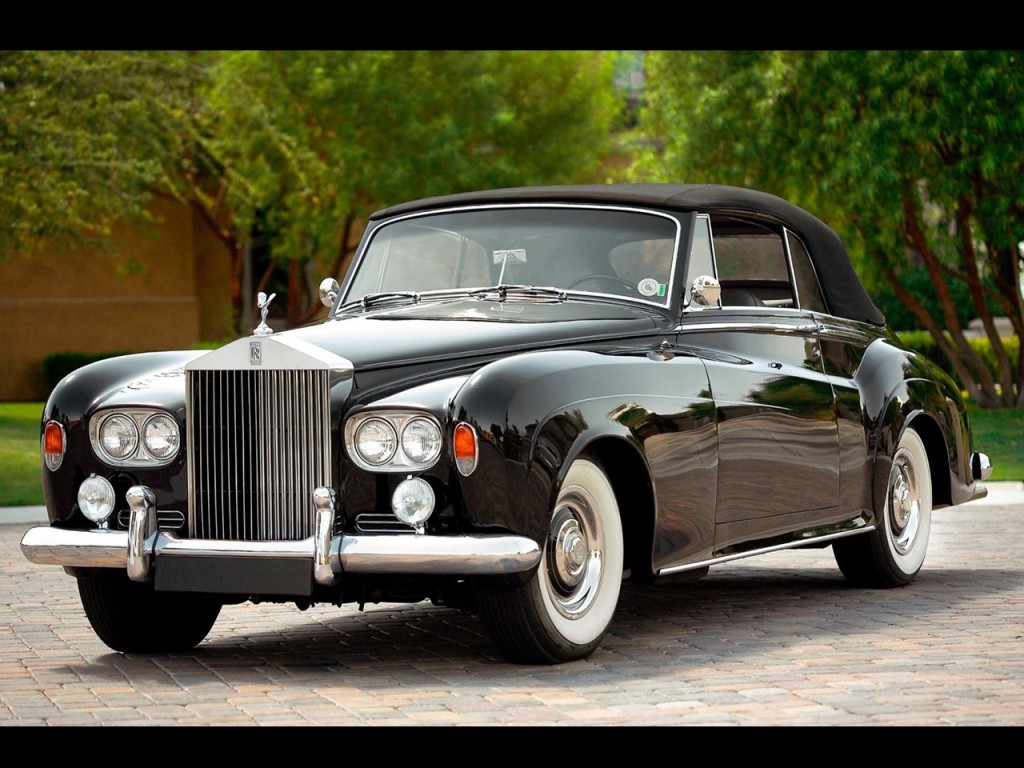 Eminent coachbuilders would create completely bespoke versions of the Silver Cloud III. They were superbly transformed into one of a kind works of automotive art. HJ Mulliner, Park Ward, and James Young were just a few of the masters of the craft building custom-bodied Rolls-Royces. These highly bespoke vehicles now sell for six figures. Mulliner Park Ward created coupes, convertibles, and magnificent limousines that have become museum pieces. The eloquent Rolls-Royce Phantoms were built specifically as limousines…not “double-cuts” merely adding fake body tubes as the limousines of today. They were all crafted by hand with no two being alike. These fine automobiles are as unique as their owner’s specifications. 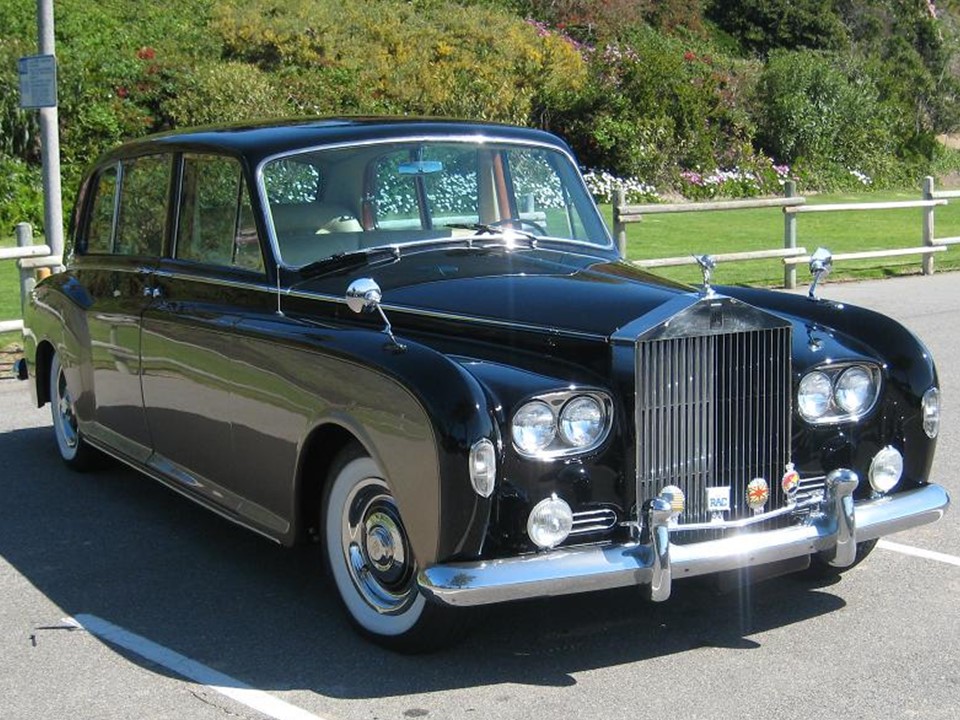 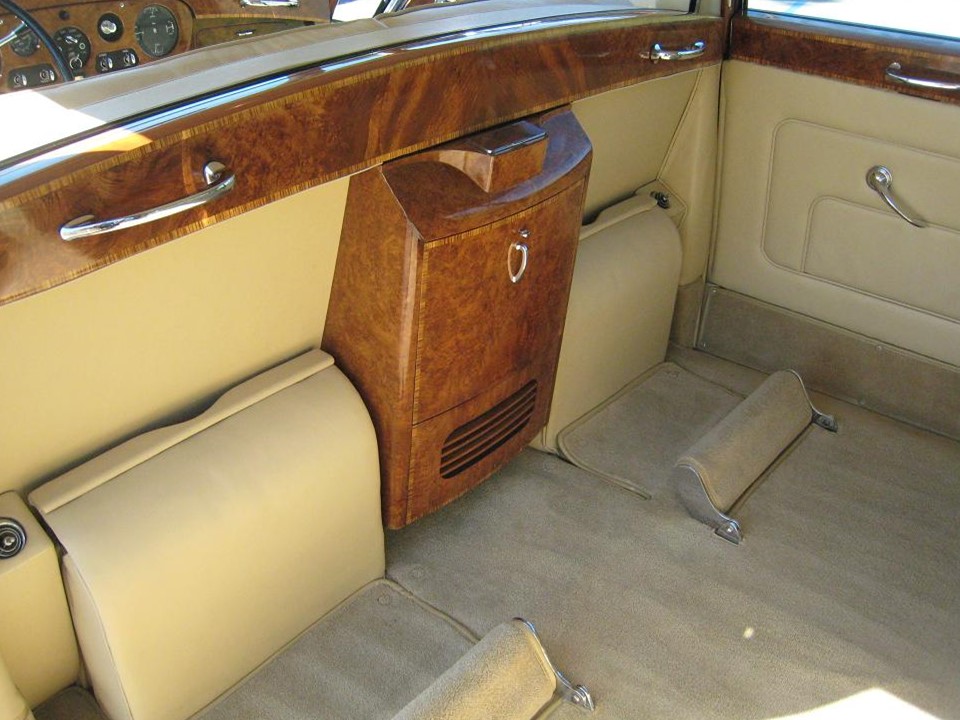 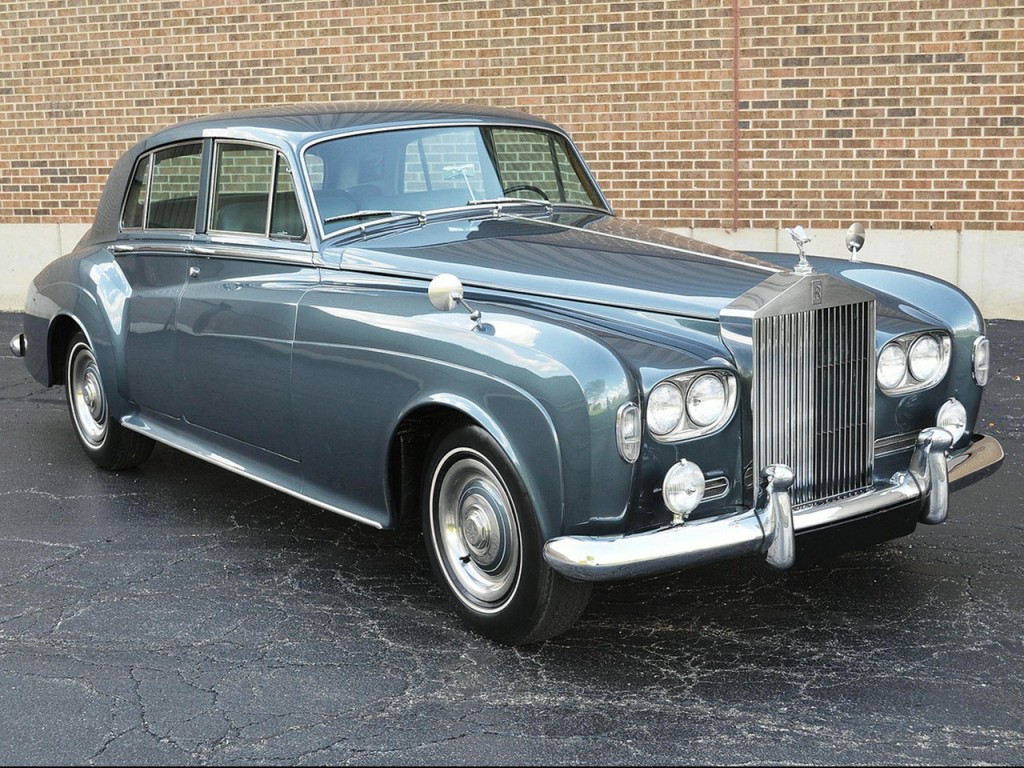 The Silver Cloud series is one of the most successful production runs in Rolls- Royce history. It is the iconic body style that is the most highly recognized in the entire world. It was the star of the show from 1955 until it ceased production in 1966 when the Silver Shadow made its debut for the 1965 model year. Kings, Queens, heads of state, actors & actresses, and the extremely wealthy clientele were all cult followers of these luxurious land yachts. Built in three series, each has become treasured classics. The Silver Cloud III is the finale to the highly prized series and is destined to continue its reign as one of the world’s top choices for luxury automobiles. Charles Stewart Rolls and Sir Frederick Henry Royce thought in terms of perfection…taking the best and making it even better – they would be proud to know their exclusive brand is still alive and quite well – 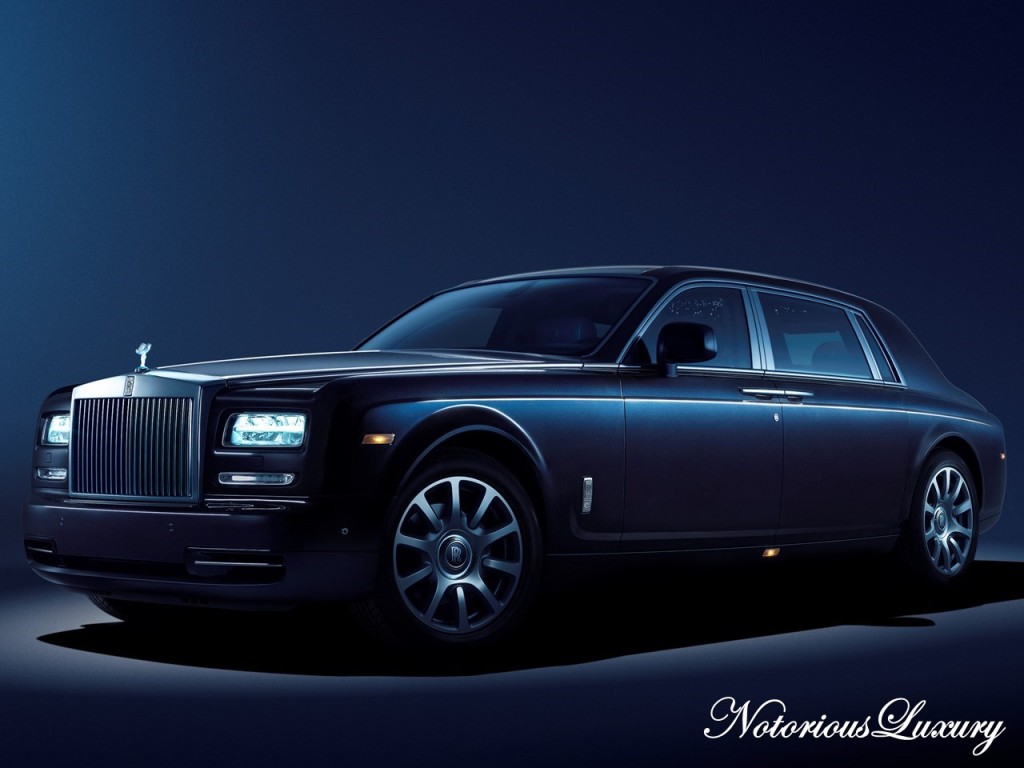 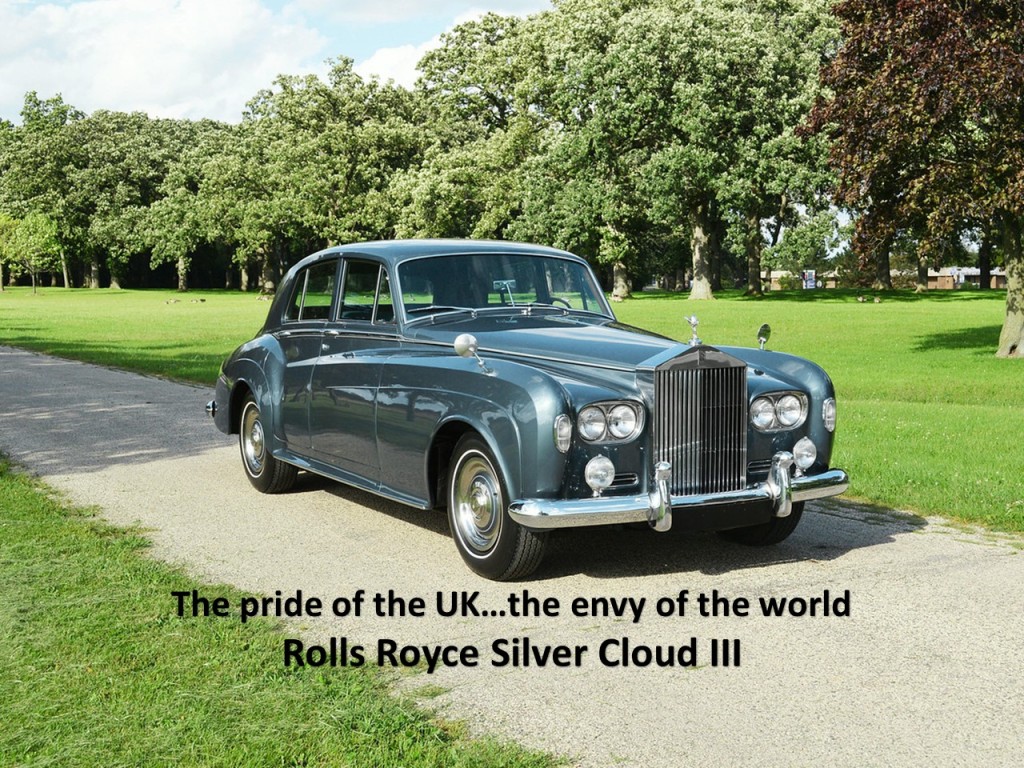 A thing of beauty is a joy forever…