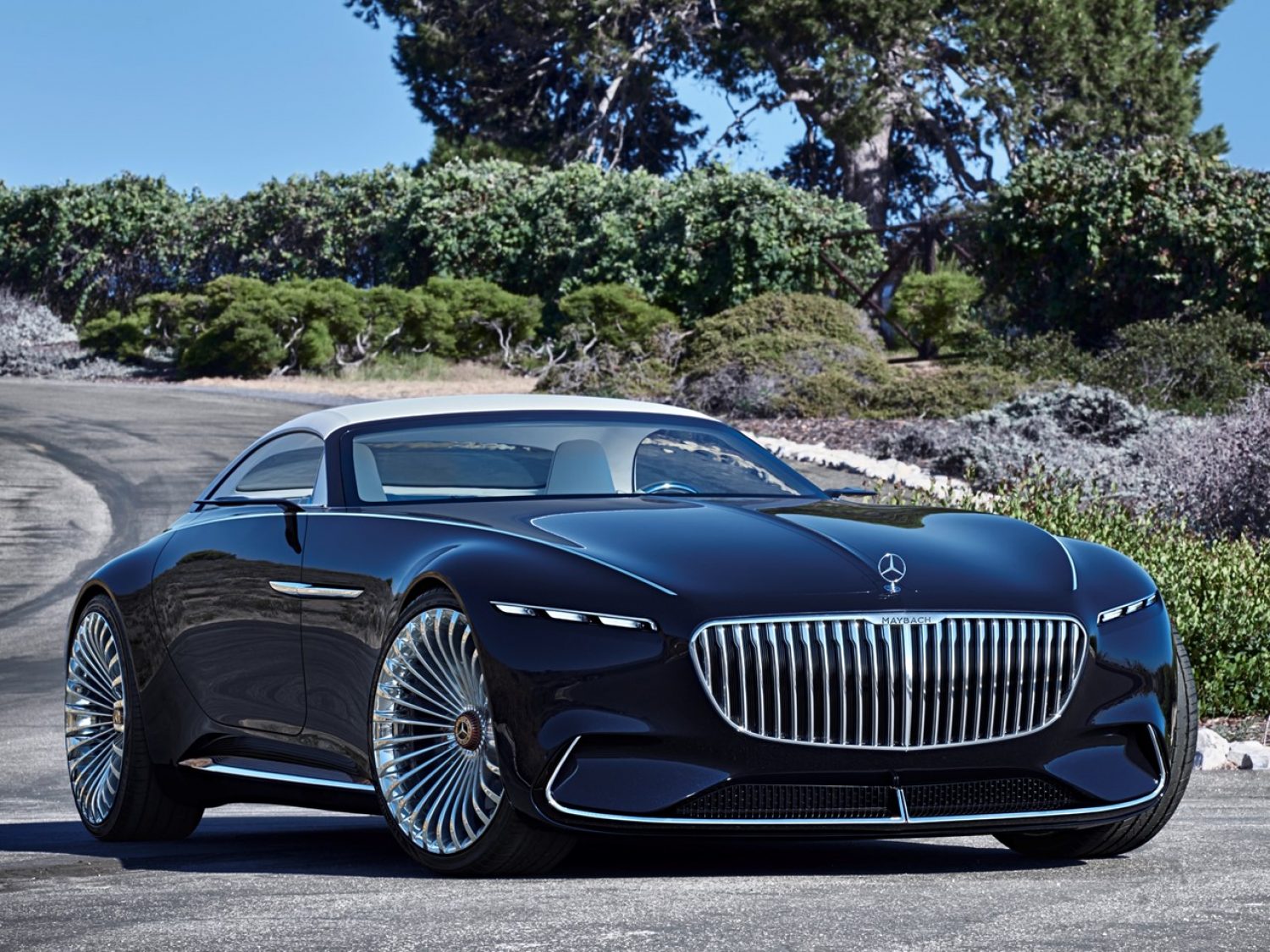 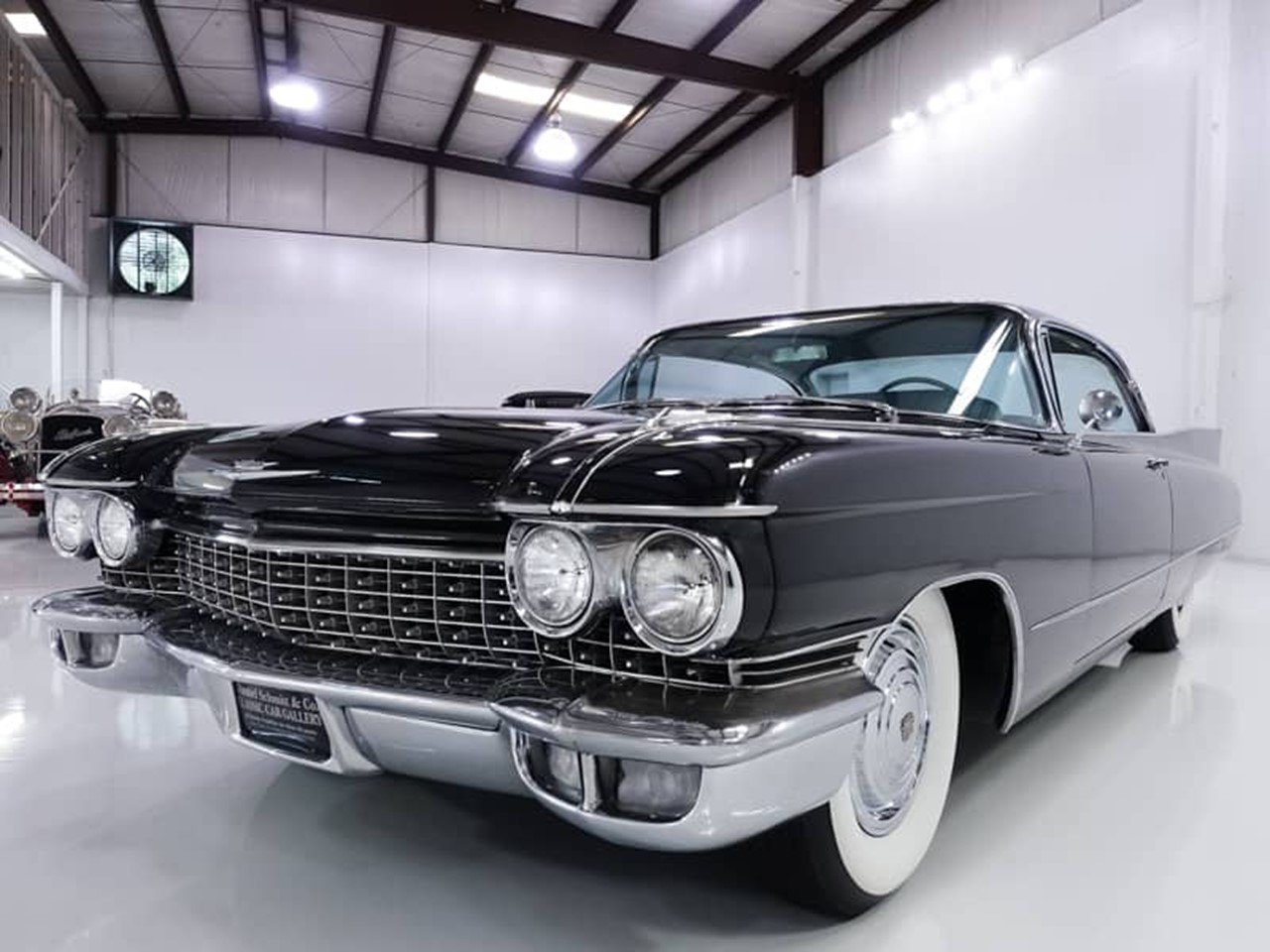 Welcome to the pomp and splendor of the traditional Cadillac motorcar. It is more than a mere automobile…it is a legend and a lifestyle. Cadillac earned the reputation as the superlative of superlatives through sophisticated engineering and exemplary craftsmanship. A traditional Cadillac moves with tremendous verve and élan. Luxury and innovation is the constant companion when one chose to drive the formidable “Standard of the World.”

The traditional Cadillac remains as one of the most revered automobiles to connoisseurs world-wide. One model in particular dominated this rare arena becoming “America’s favorite luxury car.” The iconic and unforgettable DeVille series is a jewel in the crown of General Motors. Coupes deVille and Sedans deVille consistently took turns leading sales production totals. Their unequalled pre-eminence made them the universal status symbol. 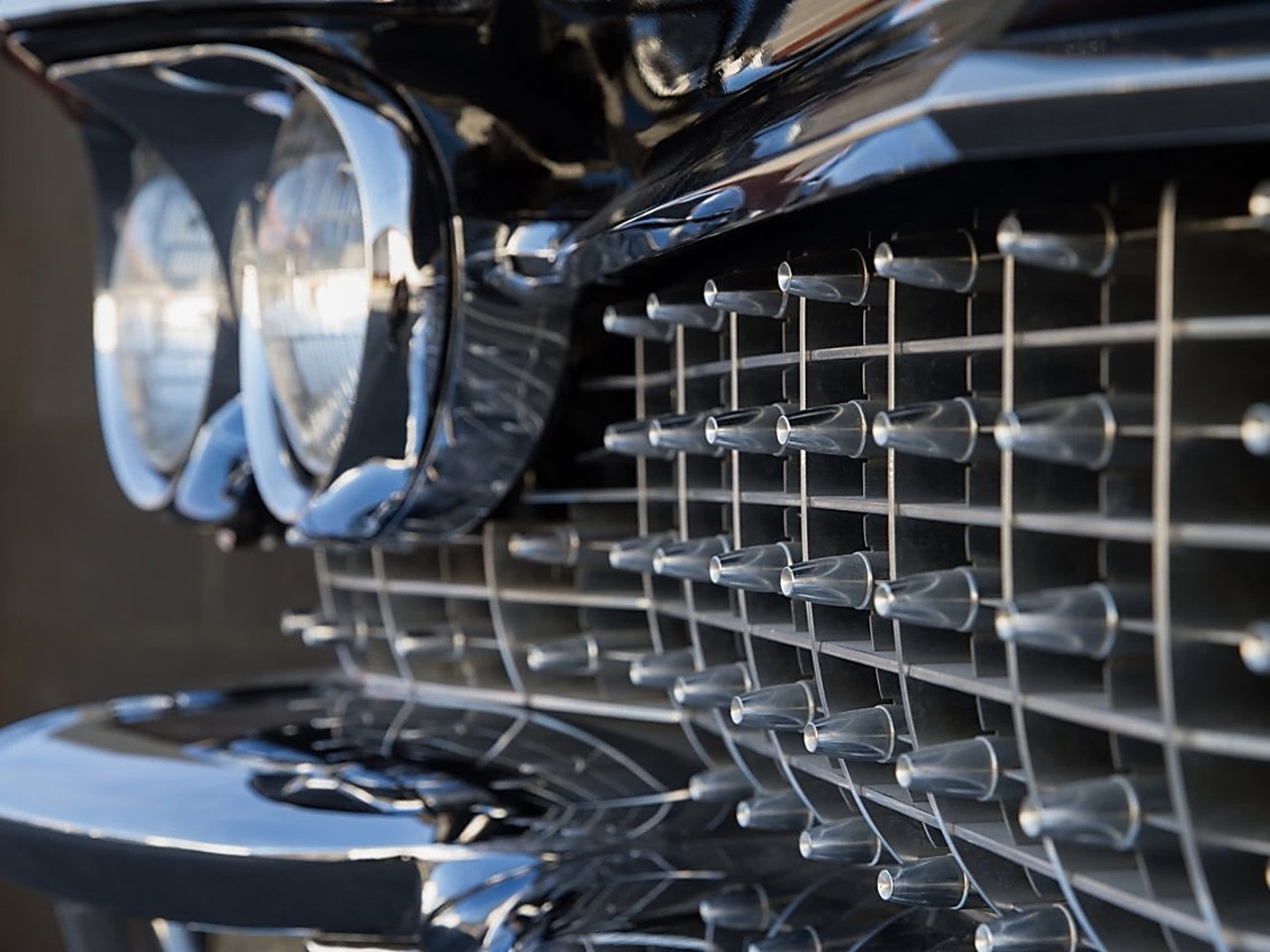 The 1960 Cadillac Series 6300 Coupe deVille is the quintessential example of American excess – flamboyant…yet tasteful. It echoes success. There’s new elegance and refinement. The epochal “Standard of the World” had once again left its indelible signature in the ultra-luxury car segment. Bill Mitchell, chief design engineer for General Motors gave the 1960 Cadillac an elegant poised dignity.

Overall styling refinement and restrained use of ornamentation diminished the bling from the 1959 Harley Earl design. These new models advanced the Cadillac tradition of excellence to an extraordinary degree. The 1960 Cadillac Series 6300 Coupe deVille showcases its dignity, refinement, and dramatic beauty…in the continuing saga of “As the Standard of the World Turns.” 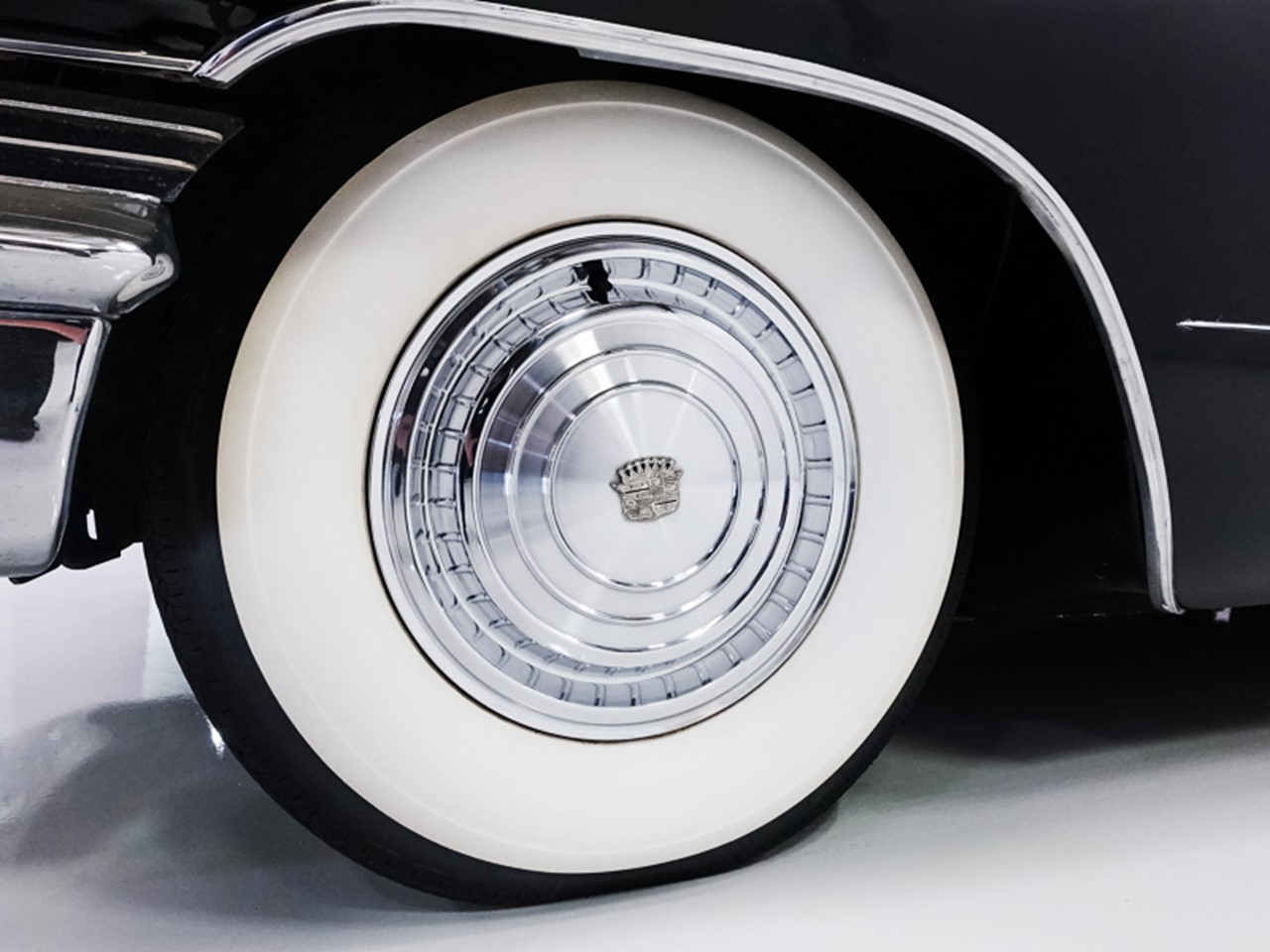 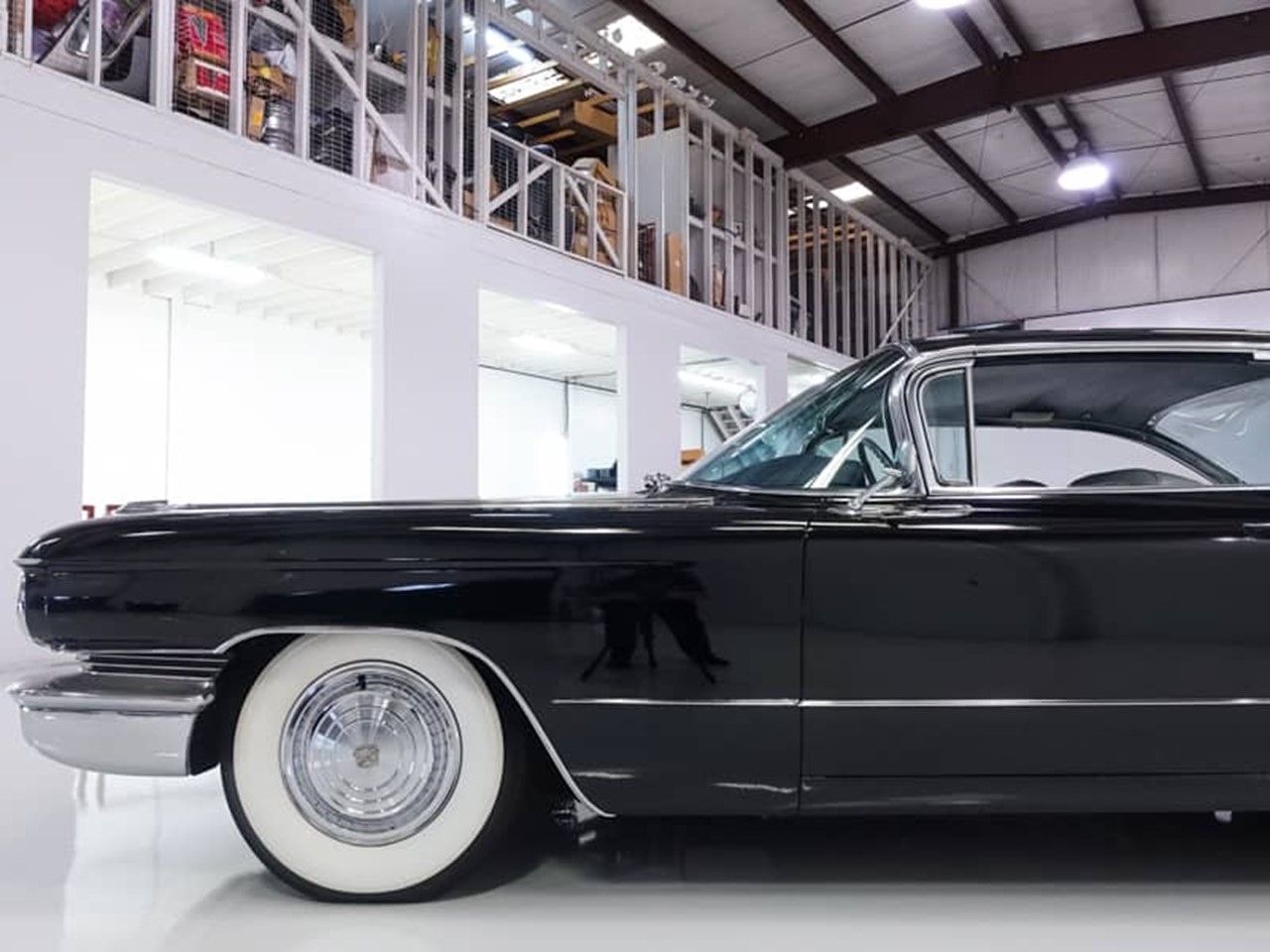 The traditional Cadillac is the most charismatic luxury automobile to motor out of Detroit, Michigan. It was the American dream. Life…liberty…and the pursuit of Cadillac – nothing on the road could compare. The “Standard of the World” is an innovator, it follows in no other auto manufacturer’s tire tracks. It never took styling cues from the competition, Cadillac designed its cars to be ultra-exclusive. The entire auto industry took note. The “other” luxury car was forced into submission by the “Standard of the World.”

Exquisite fit & finish, superb engineering, and an inexhaustible dedication to excellence allowed it to carve its own exclusive niche in the luxury car segment. The traditional Cadillac is the most impressive and the most glamorous of all American Grand Marques…it’s the iconic tail fins that made it most charismatic. In 1960, Cadillac had been “Standard of the World” for fifty-eight years. These cars were built when “Made in the U.S.A.” meant something special…

For 1960, Cadillac presented a refined new sophistication. The tail fins were trimmed and tapered into the bodywork. This made the entire vehicle appear longer, lower, and wider. Bill Mitchell removed the ‘excess’ from Harley Earl’s genre making Cadillac even more luxurious. The tail lamps are now integrated into the fins for Mitchell’s “tailored look.” Turn signal lamps and back-up lamps are neatly set into chrome oval nacelles coordinating the contemporary new restyle.

The front-end ensemble is augmented by its wide cross-hatch grille design with alternate bars beveled to reflect a contrasting jewel-like pattern. A less ornate bumper is more sophisticated. Turn signal monitors integrated into the top of the crown moldings atop of each fender flash small amber lights alerting the driver to left and right turns. The overall look enhanced Coupe deVille’s sweeping silhouette making it lower, more refined yet completely in character with the “Standard of the World.” It’s remarkable how just a few changes made the 1960 model look completely restyled when it was not. Restrained use of ornamentation gives the car an understated elegance. 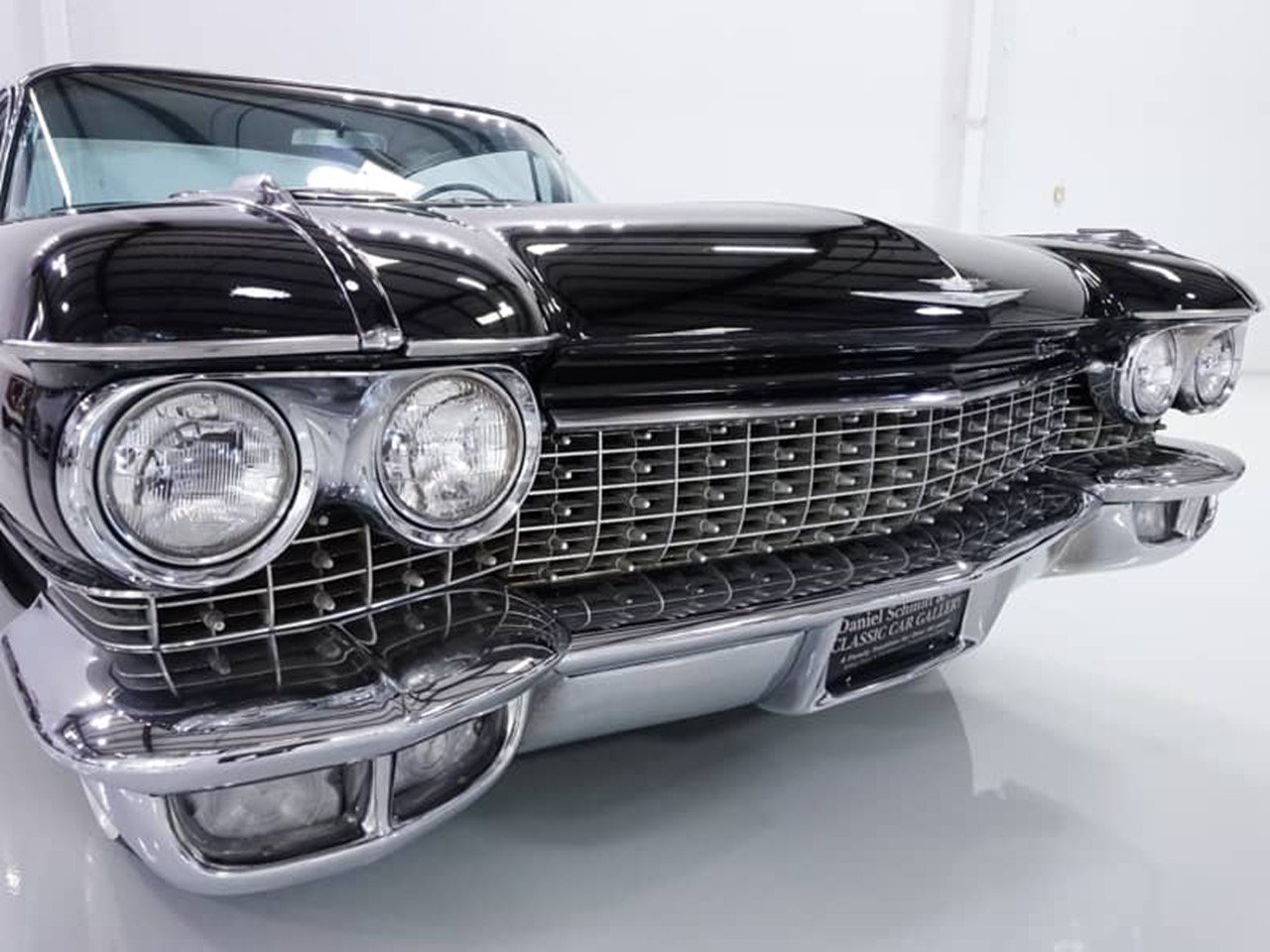 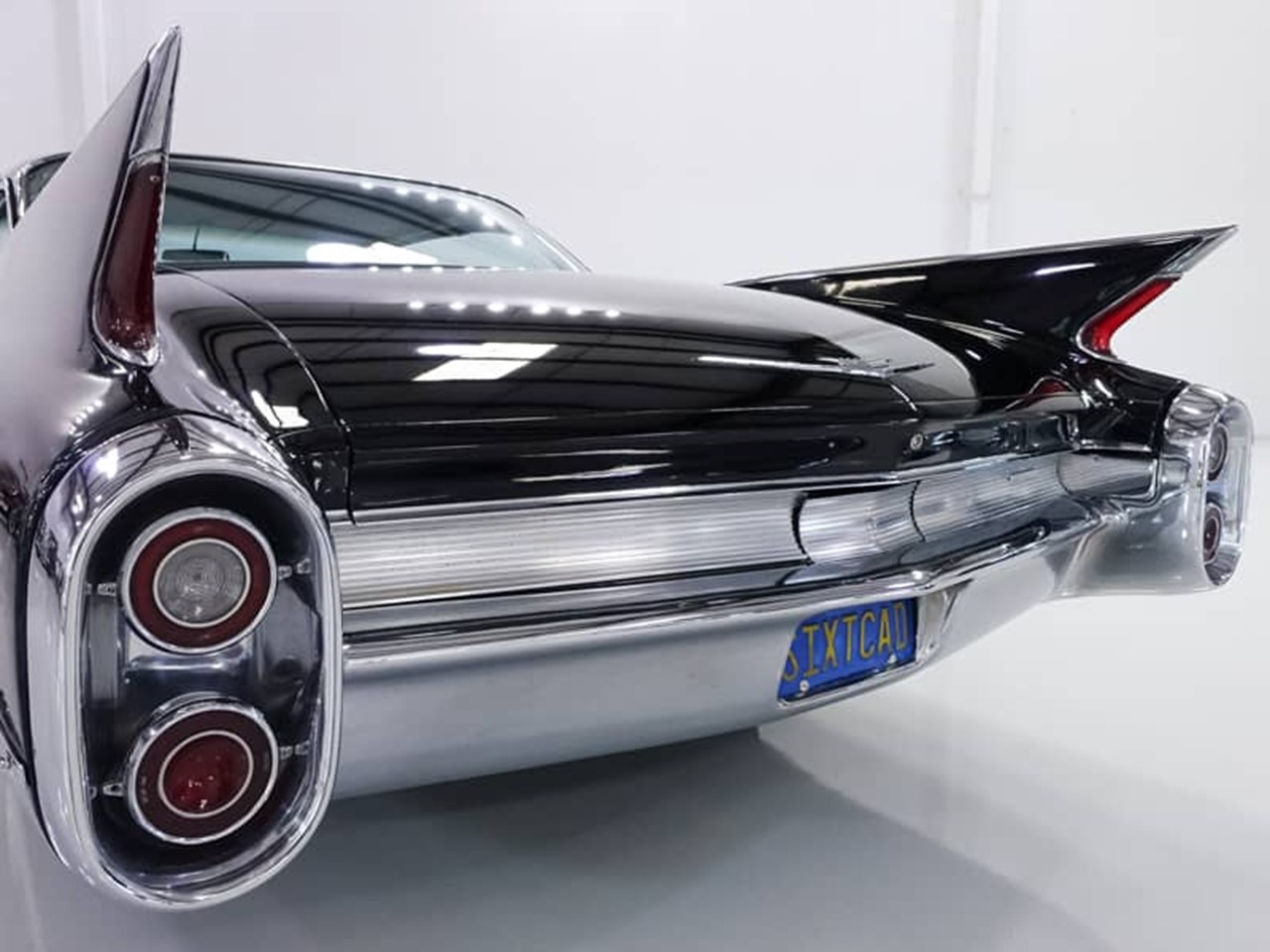 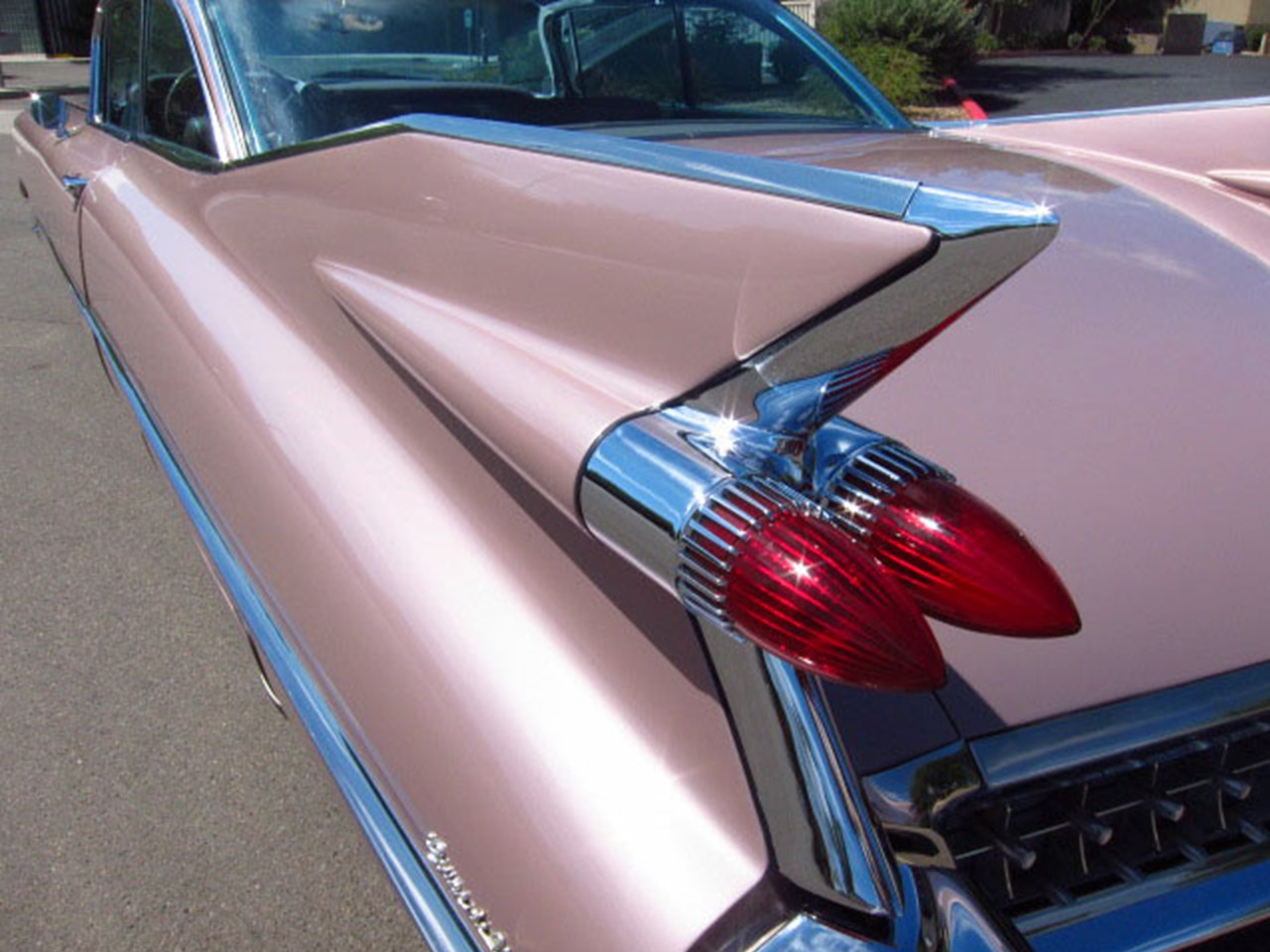 1959 Cadillacs sported the tallest tail fins in the industry 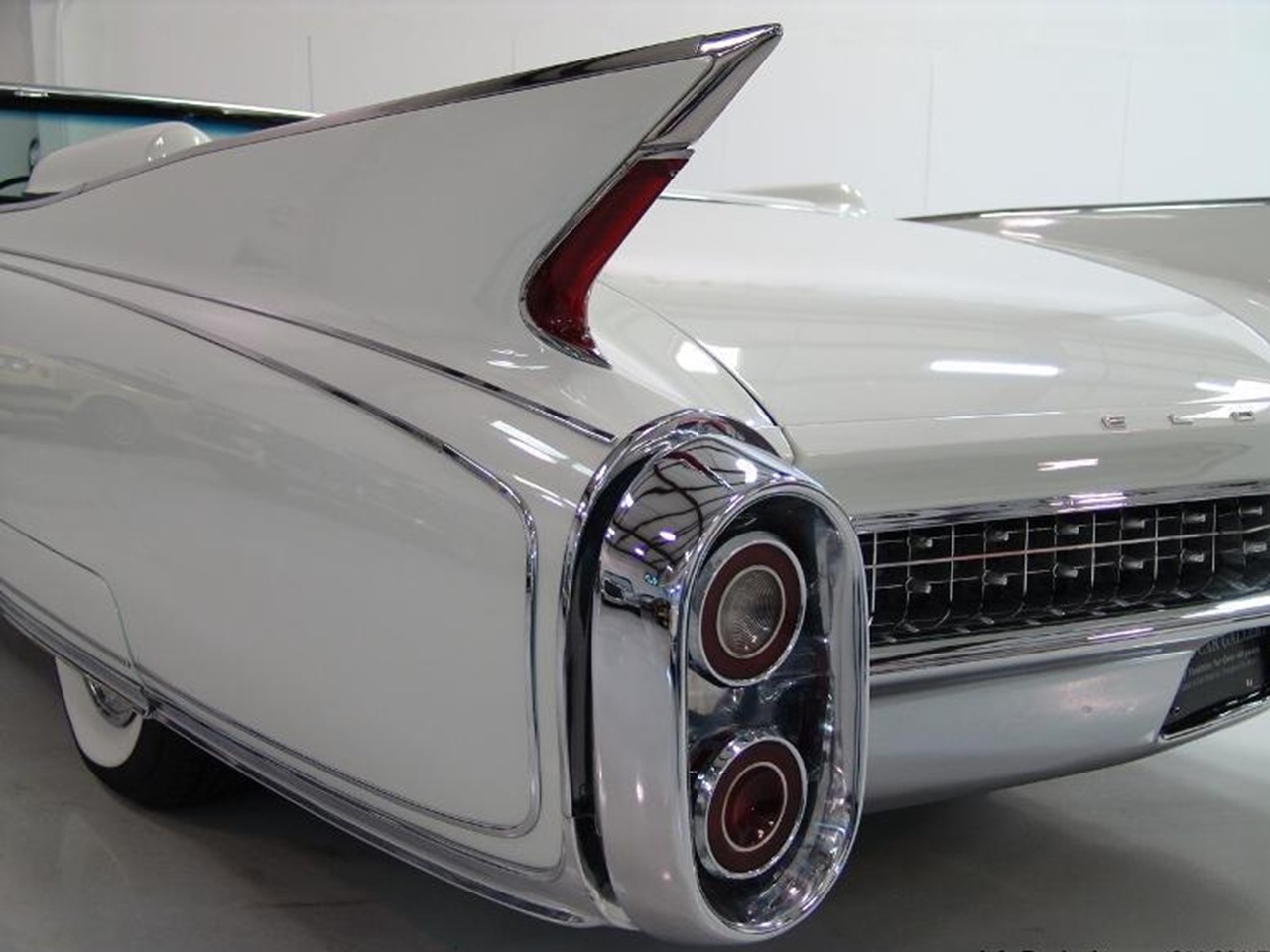 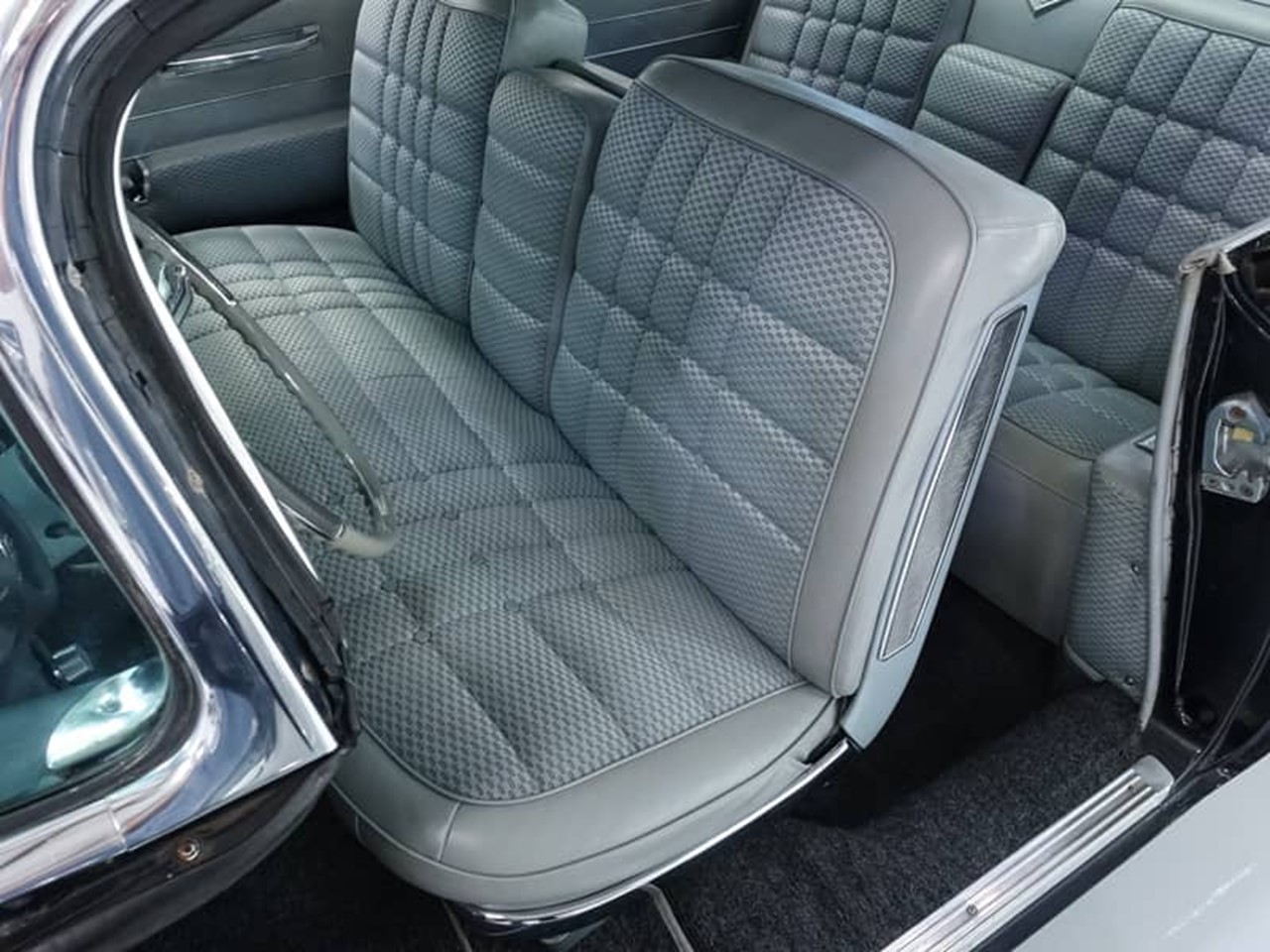 Coupe deVille’s cabin is an exercise in sheer splendor. The luxury continues to proliferate…Cadillac-Style. A newly designed instrument panel places pertinent information directly in the driver’s sight for quick assessment; the instrument cluster is recessed into the dash eliminating annoying reflection.

One may repose within the epitome of luxury with the standard diamond patterned nylon Chadwick tailored cloth interior or optional Cambray cloth with Florentine leather bolsters. Elegant Trieste nylon blend deep loop-pile carpeting flows lavishly throughout covering floor, lower door kick panels, and cowl sidewalls. The front floor tunnel is lower and narrower as a result of a more compact design of the transmission housing.

This equates to even more foot room for front seat passengers. The accelerator pedal has a recess at the base which the ladies like; this accommodates high heels making the alternation between the brake pedal easier. The pedals have improved spacing for added convenience. Coupe deVille interiors are designed and handcrafted by Fleetwood to suit the most discriminating taste.

The dramatic elegance and majesty of Coupe deVille for 1960 could have been ordered to suit the buyer. These amenities include Cadillac Air Conditioning that not only heats, cools but also removes dust, pollen, and smoke. The convenience of power door locks allows front seat passengers to lock and unlock the doors at the touch of a button.

A power trunk lock not only releases the deck lid but also when the lid is lowered it is securely locked automatically. Cruise Control maintains a set speed reducing fatigue on long journeys. Exclusive Cadillac Guide-Matic headlamp control automatically dips the high beams upon the approach of on-coming vehicles; the high beams ‘blink-off’ a second time as a reminder to the on-coming vehicle to dip their high beams as well. The traditional Cadillac was a blank canvas to become as individual as one’s own fingerprints. 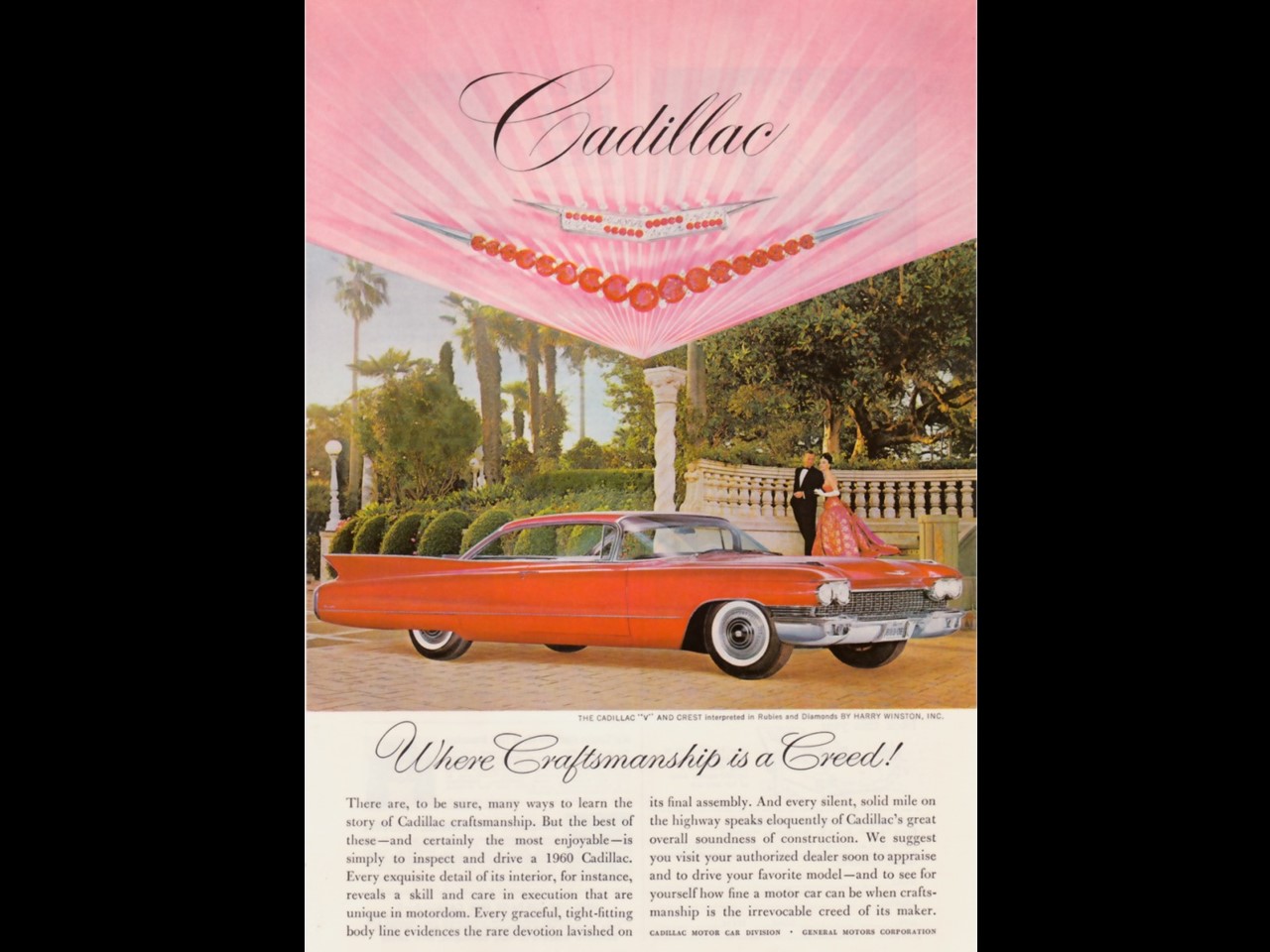 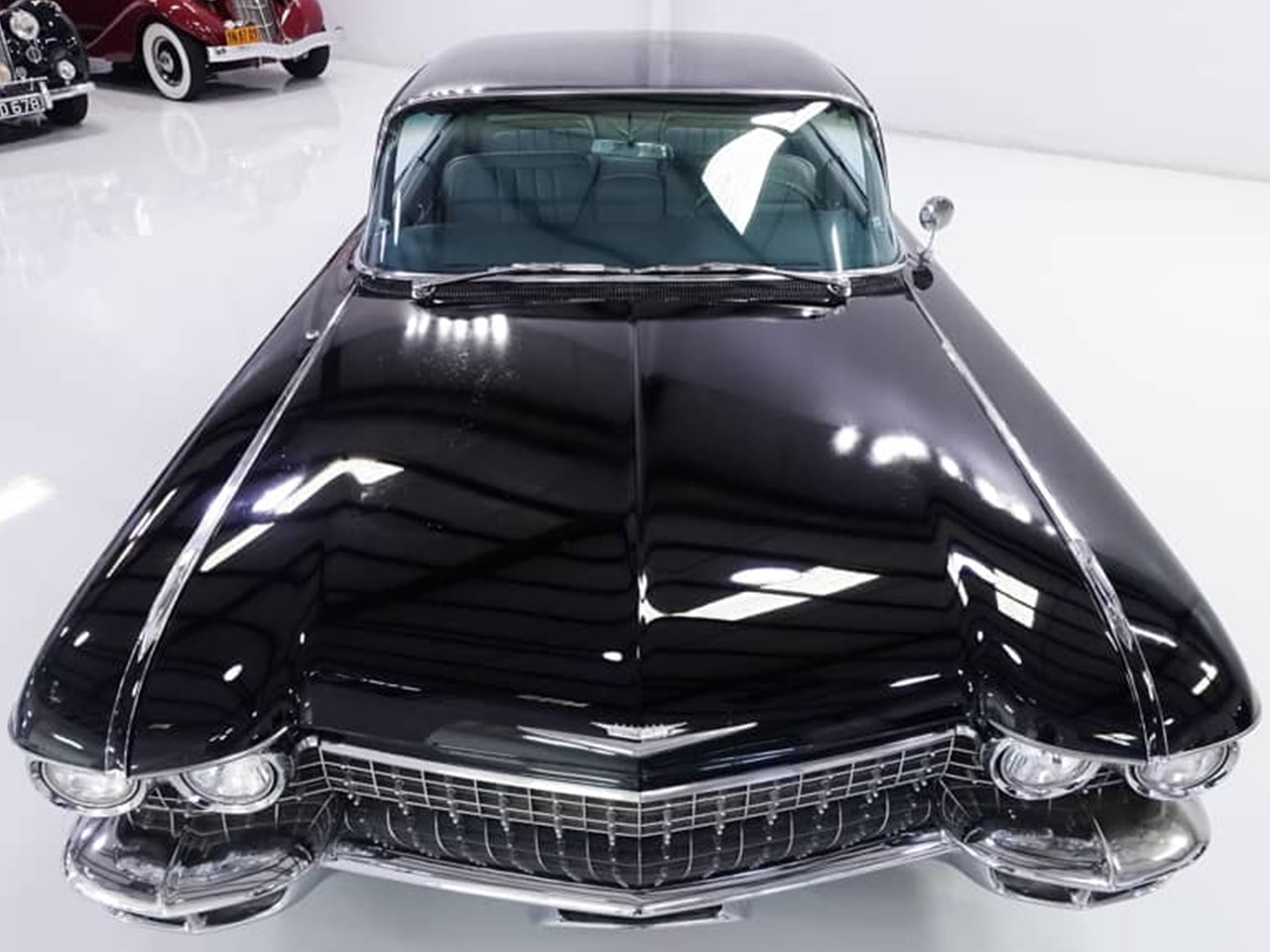 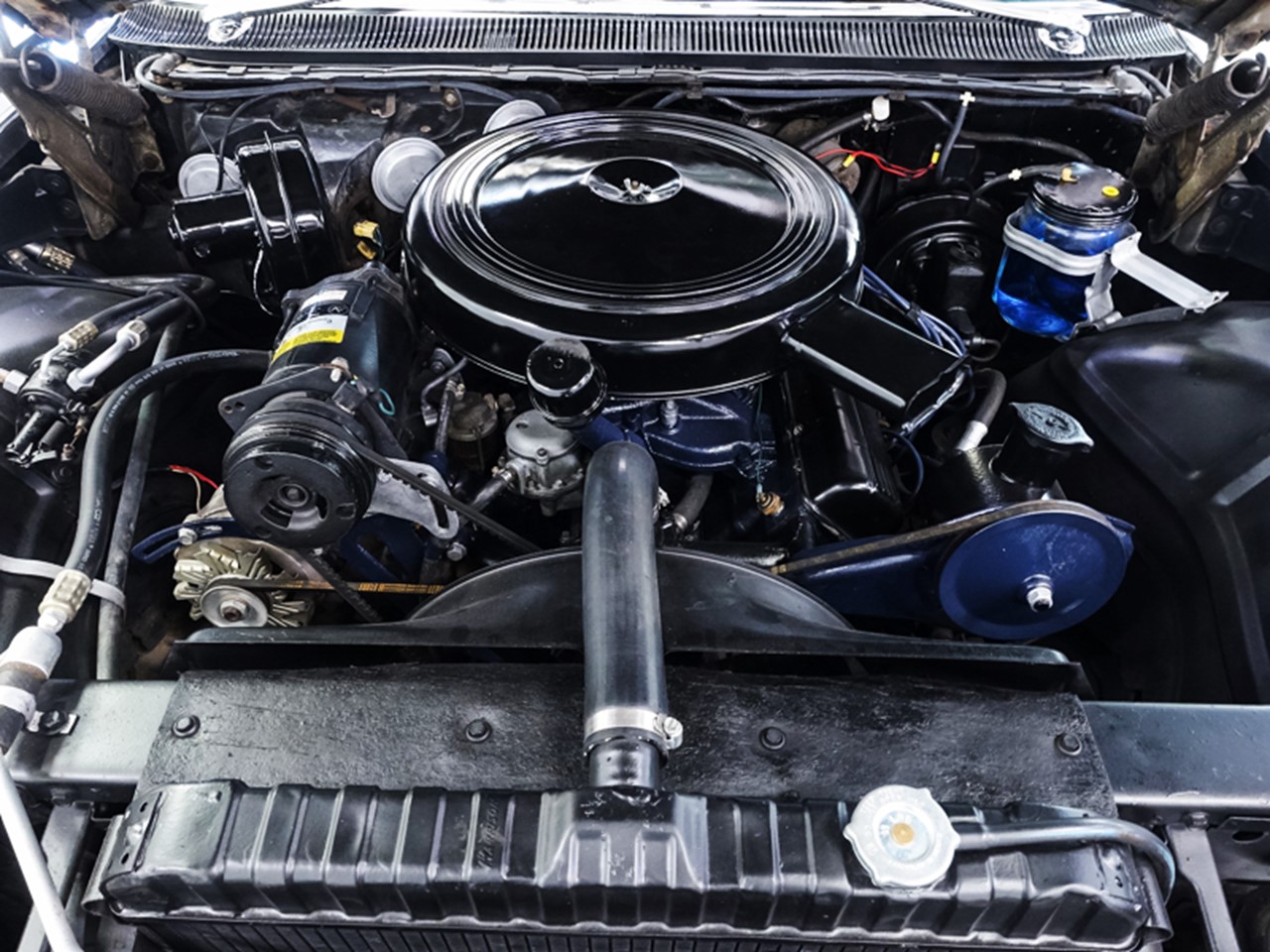 These cars may be driven using only two primary barrels of the four to aid fuel economy. The trick is not to press the accelerator too hard leaving traffic lights and stop signs…but you have to move quickly through to the third gear. Not saying jack-rabbit starts but you need to get from a standing start to third gear quickly. When the accelerator pedal is depressed quickly beyond 75% the secondary barrels open. (burp-n-slurp!) 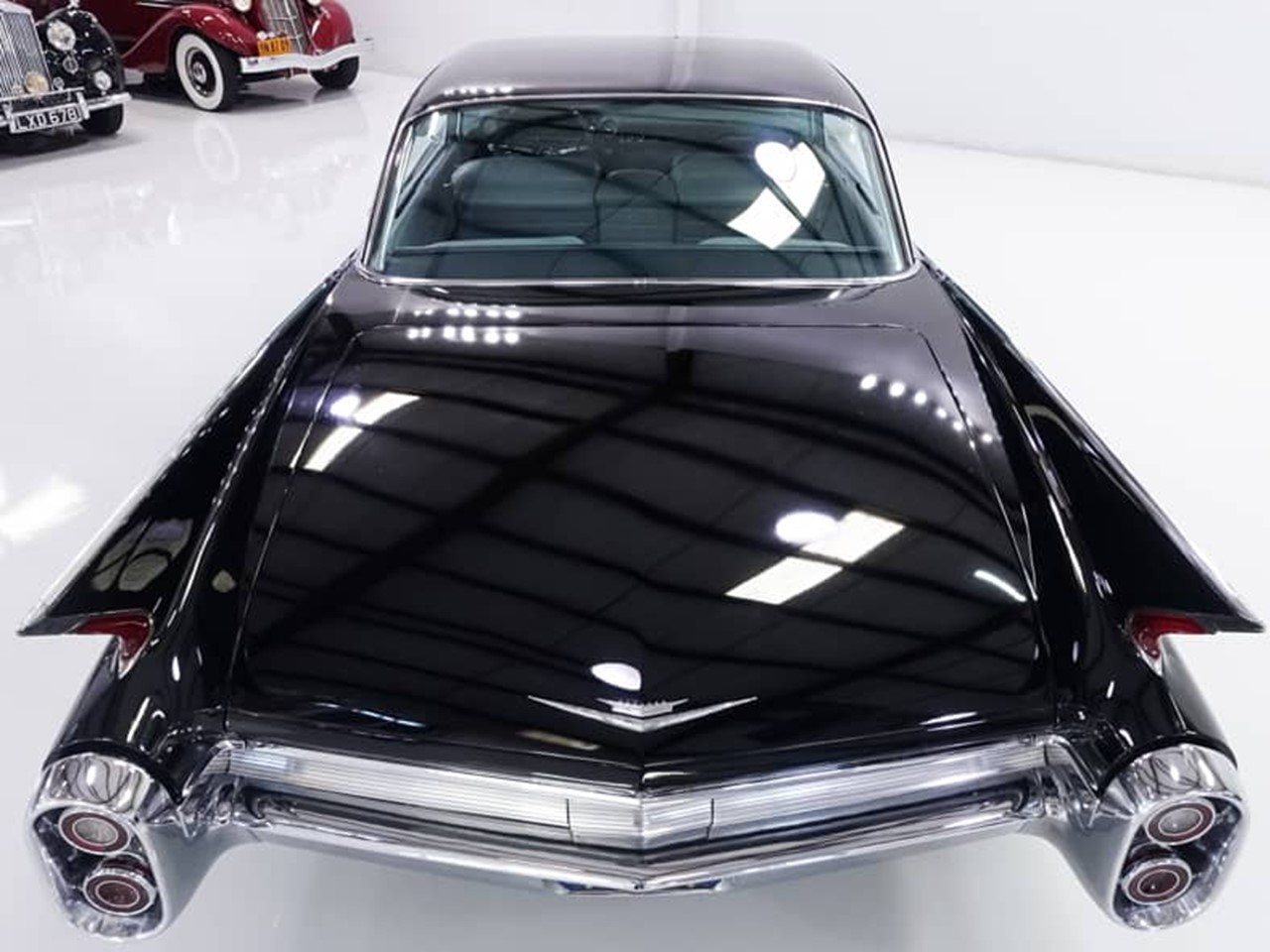 The rear suspension fine tunes the Cadillac Magic Carpet Ride further with 4-link drive and helical coil springs. The Hypoid type rear axle has an off-set differential housing to facilitate Cadillac’s straight-line-drive. Coupe deVille’s power brakes are drum type with self-adjusting shoes. The brakes calibrate themselves each time the car is driven in reverse and the brakes applied. The rear drums are finned to dissipate heat rapidly.

New for 1960 is an automatic vacuum release parking brake that doubles as a tandem auxiliary brake in an emergency. This system evolved into Cadillac’s “Triple Braking System” for the 1962 model year. A split hydraulic master cylinder has independent front and rear braking systems in case one set fails the other set will still maintain 100% braking ability. 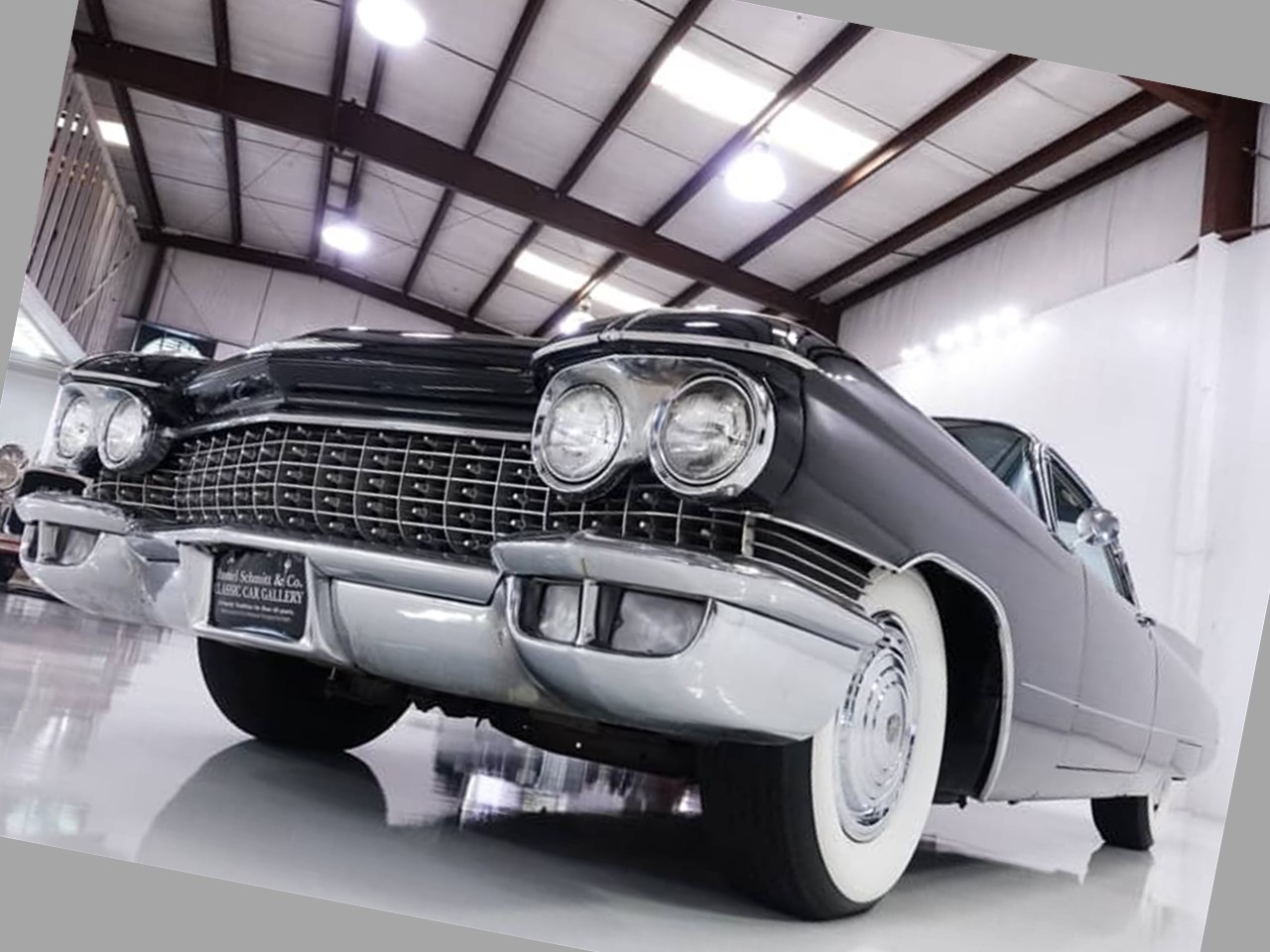 This 1960 Cadillac Series 6300 Coupe deVille has a secret. It belonged at one time to a very special person. It was the personal car for Canadian-born Ann Rutherford Dozier (1917-2012). She had the role of Poly Benedict in the 1930s and 1940s in “The Andy Hardy” series. She also had the role of Scarlett O’Hara’s sister Carreen in “Gone with the Wind.” Her illustrious career spanned five decades. The car was sold by Daniel Schmitt Classic Cars. 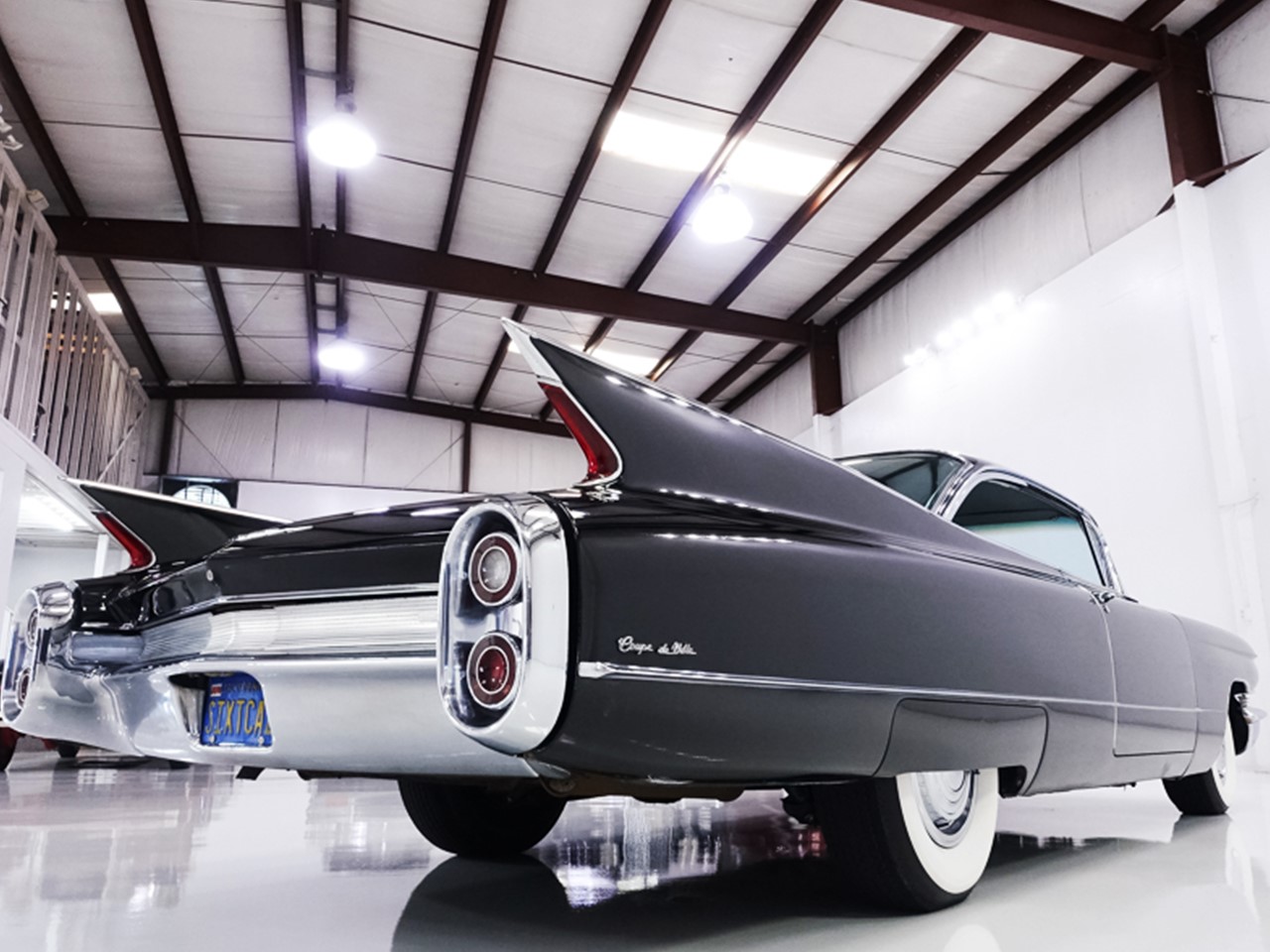 Cadillac motorcars from this genre are unique luxury automobiles. They paved the way for contemporary auto manufacturers with innovation and engineering setting industry standards. The 1960 Edition of the “Standard of the World” is another jewel in the legend’s crown. It’s a fine automobile that not only delivered the epitome of luxury and opulence but high performance as well. Only sports cars from Coupe deVille’s day share prodigious power exceeding 300 hp making DeVille a unique expression of American luxury. It reinforced Cadillac’s omnipotence in the luxury marketplace. 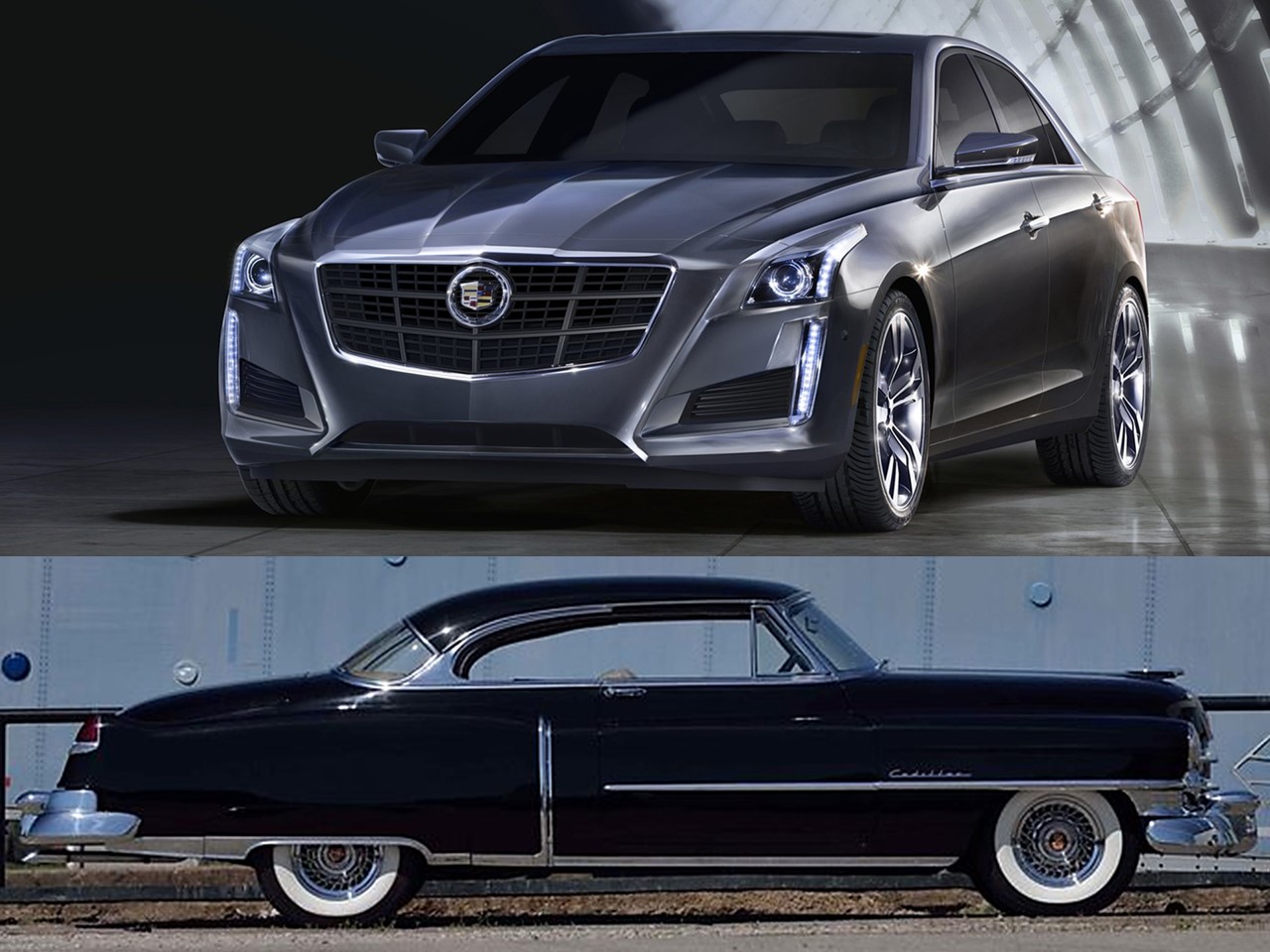 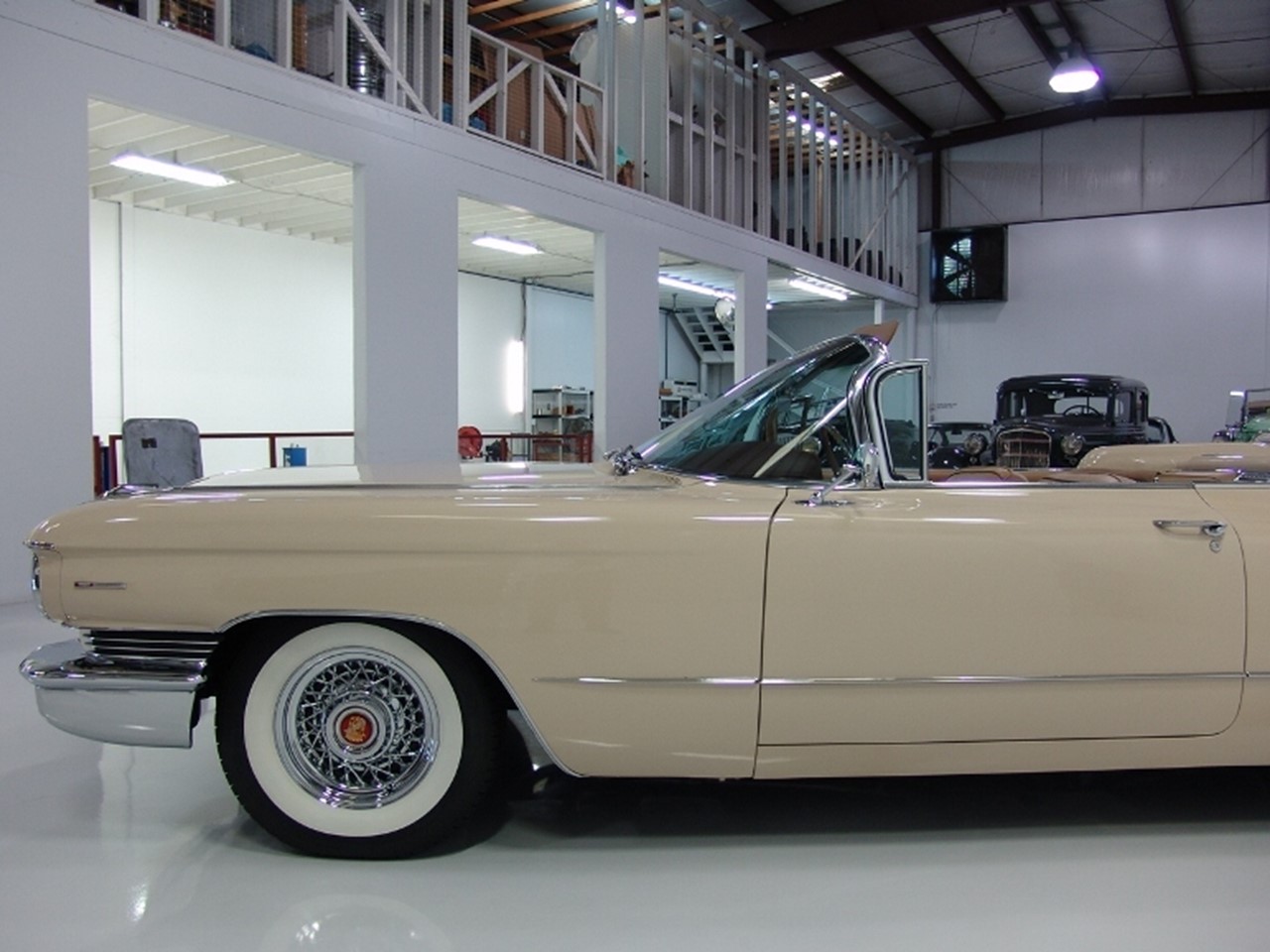 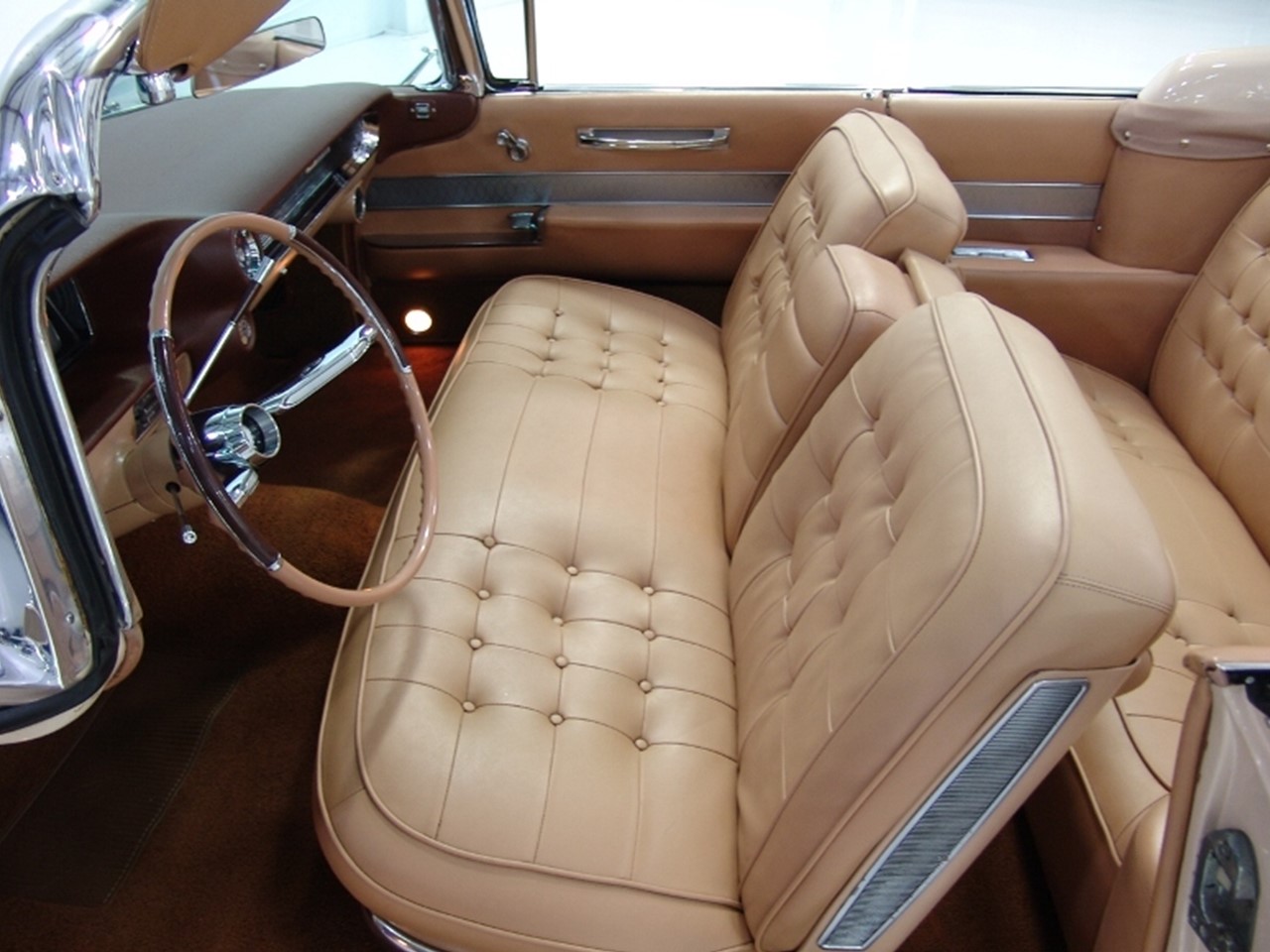 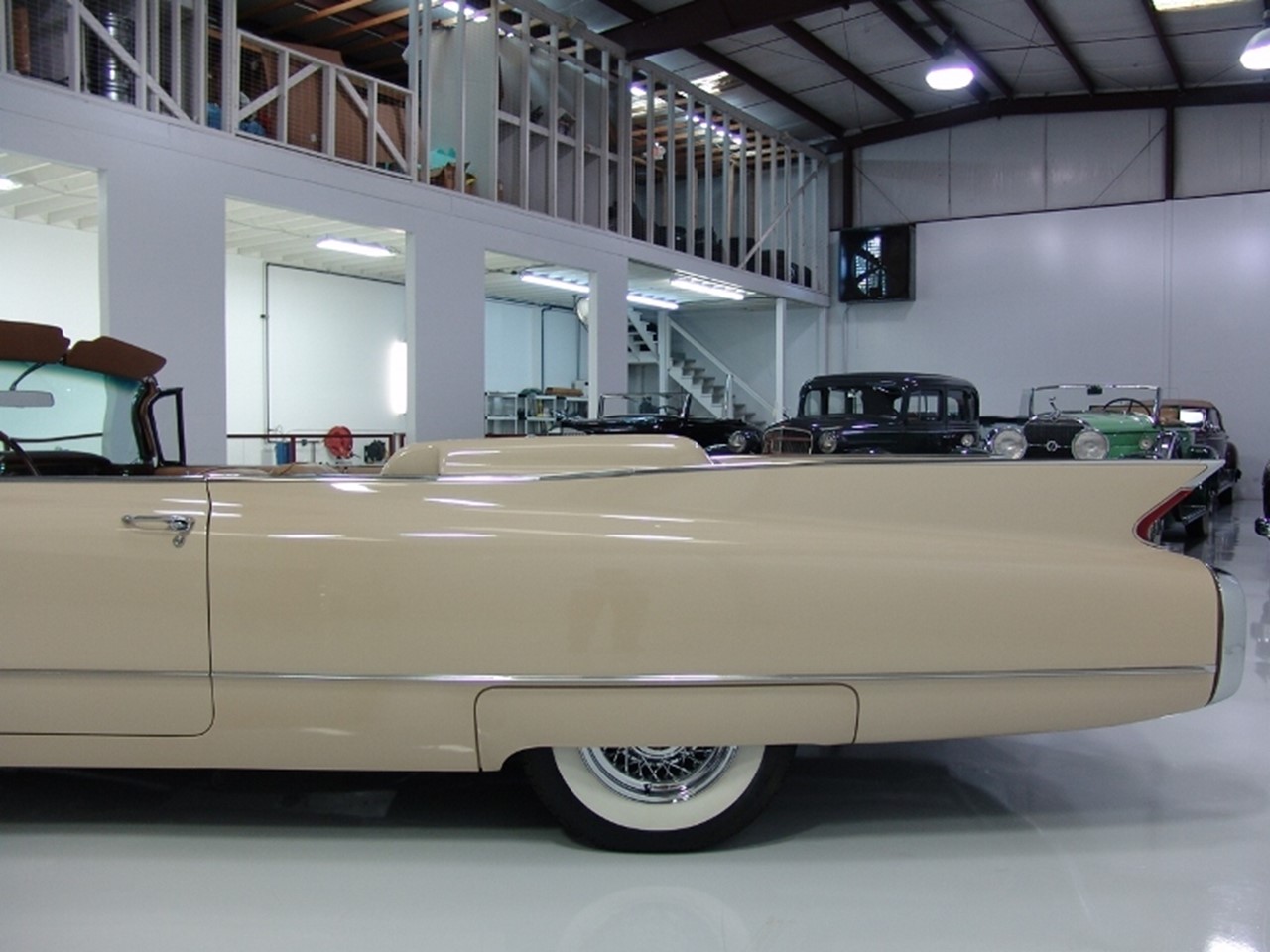 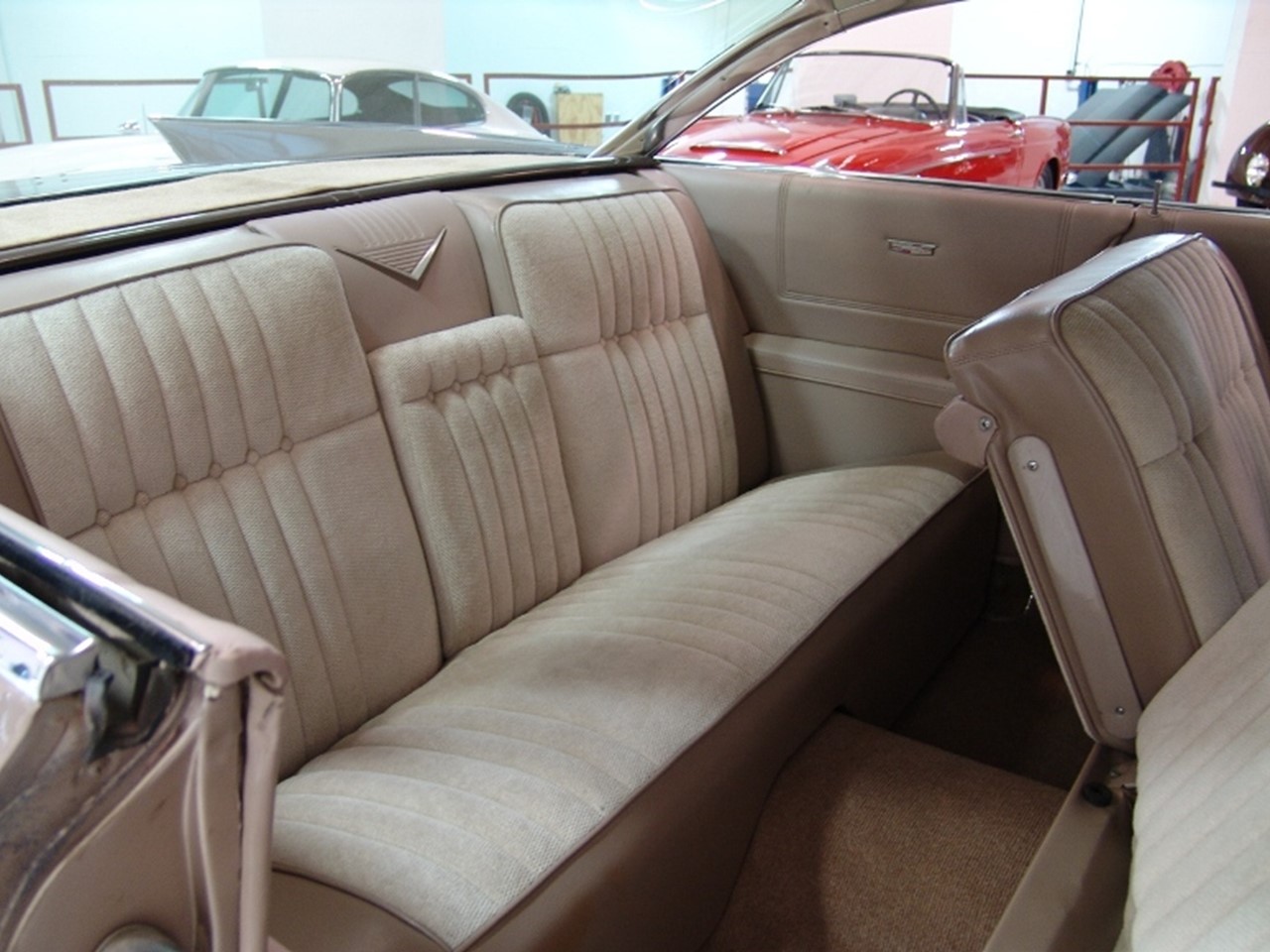 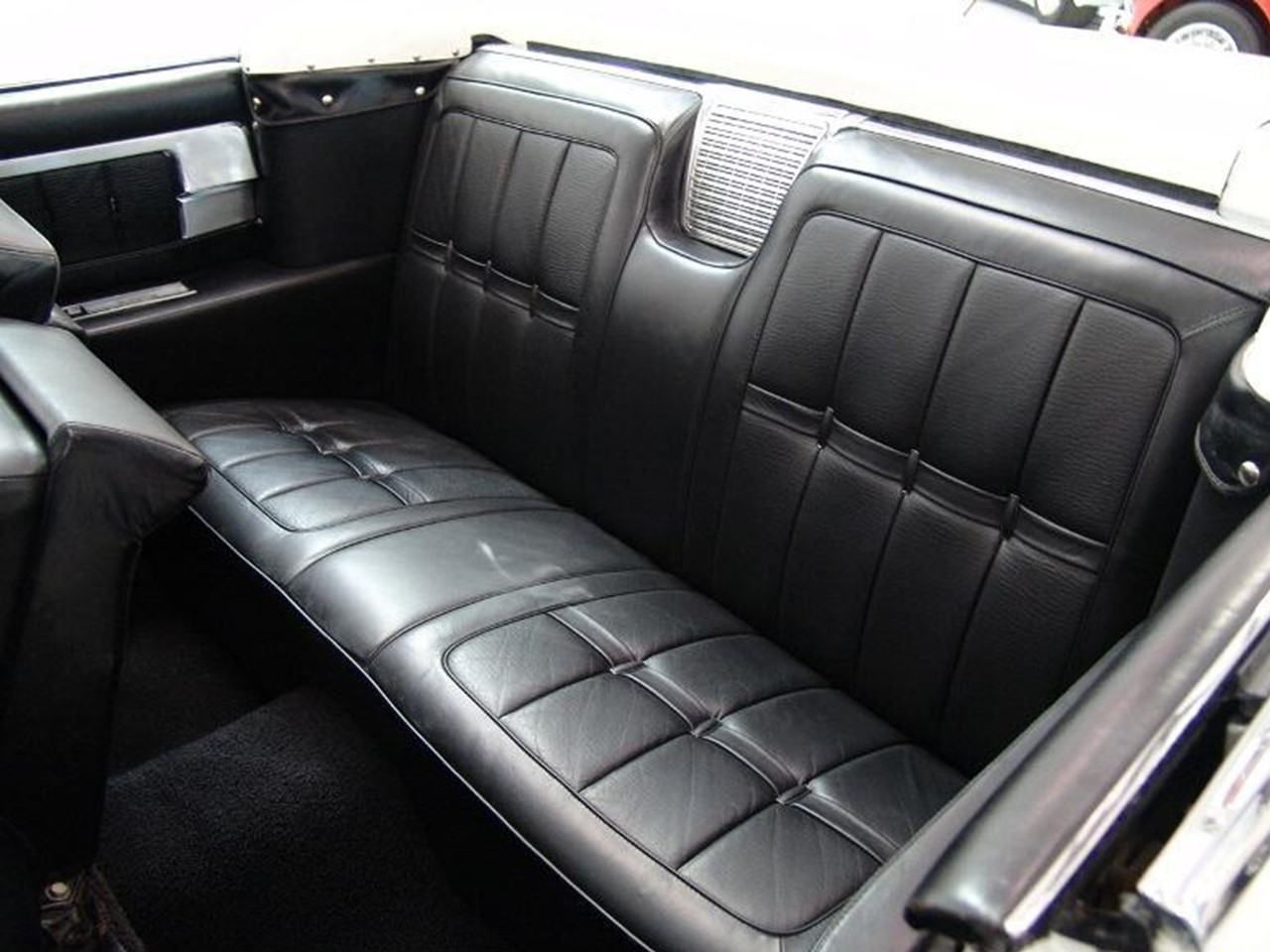 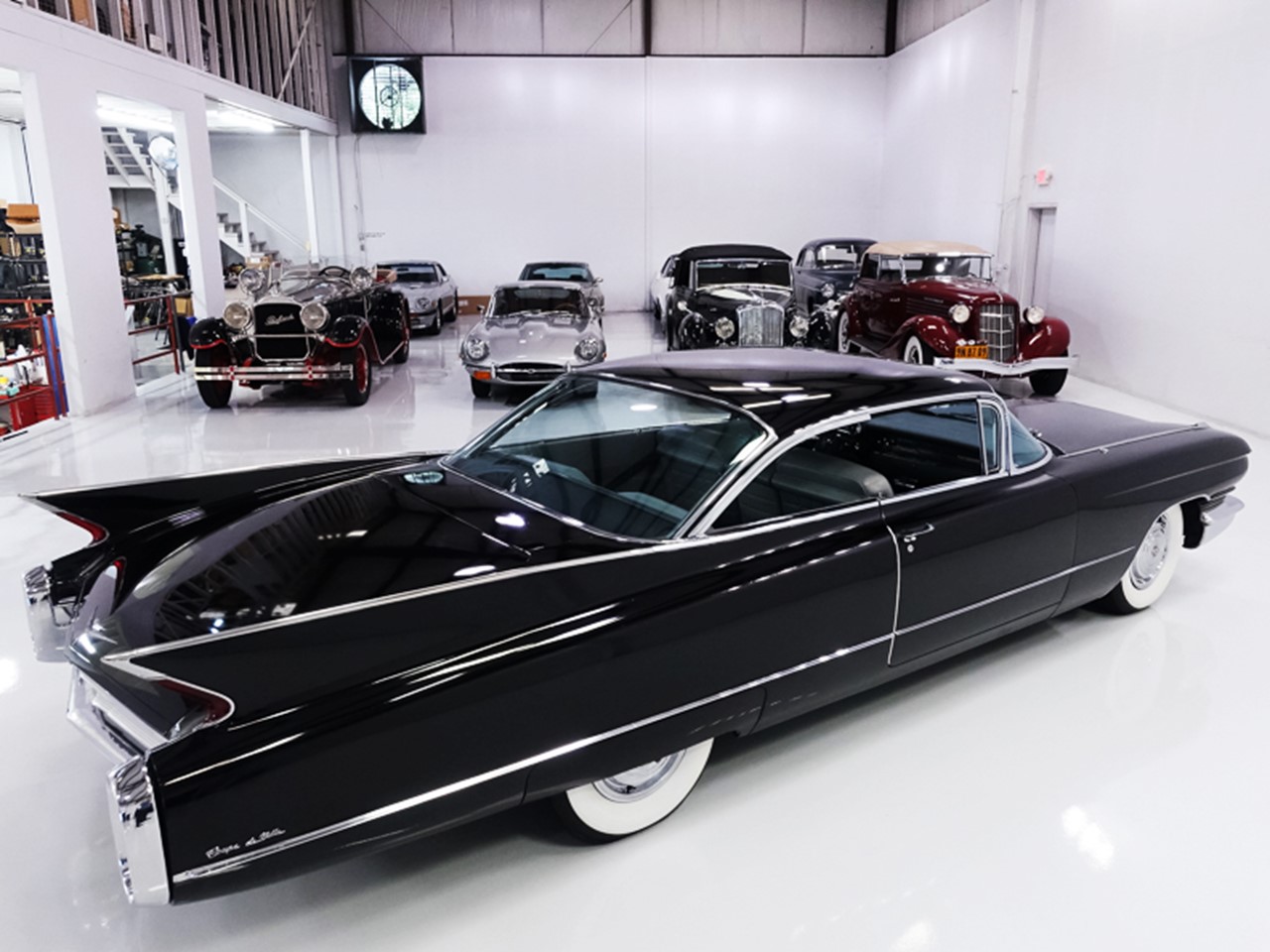 …the continuing saga of “As the Standard of the World Turns”

"As the Standard of the World Turns", Cadillac, Cadillac Historical, Cadillac: Masterpiece from the Master Craftsmen, Classic American Marques