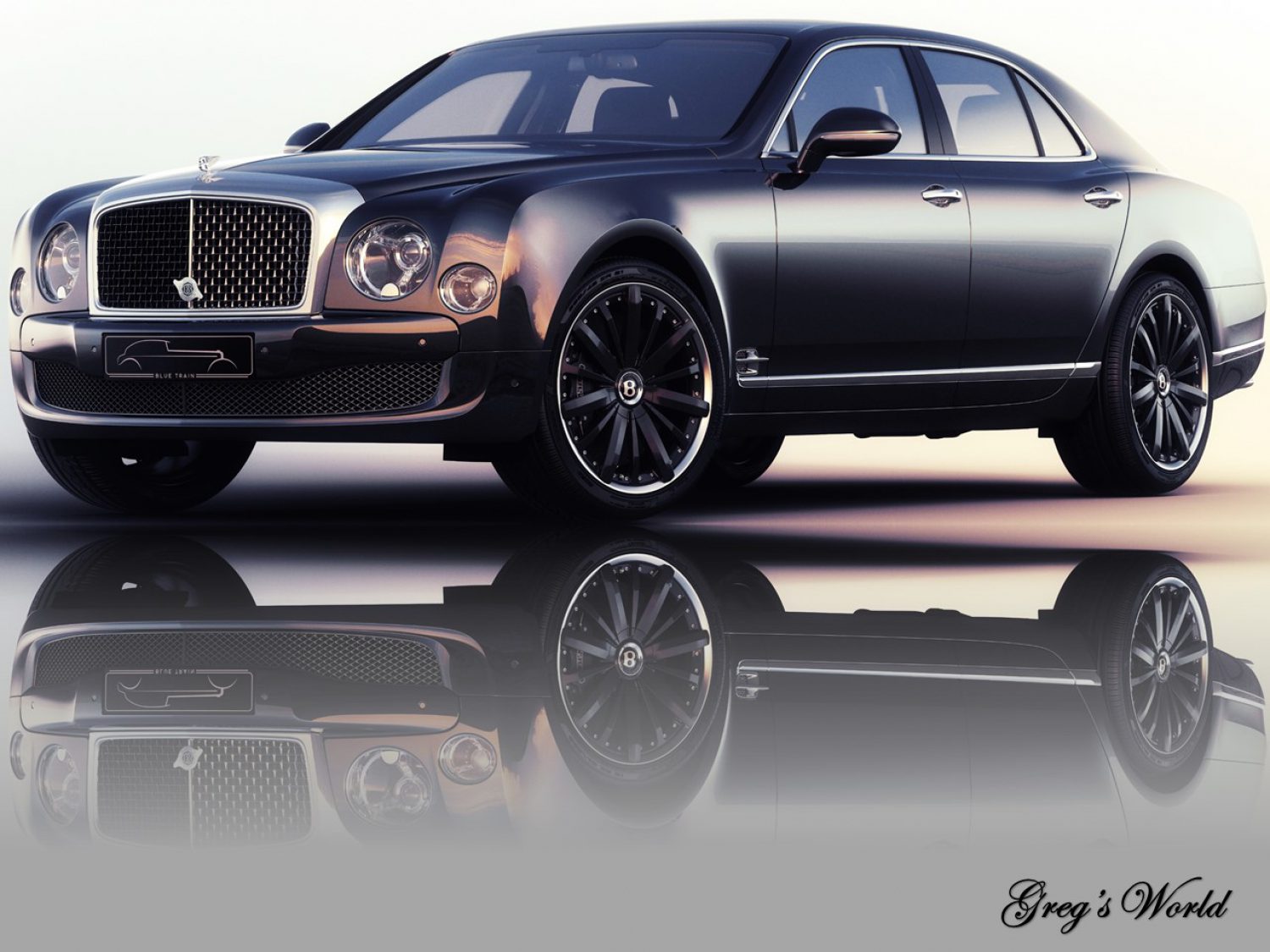 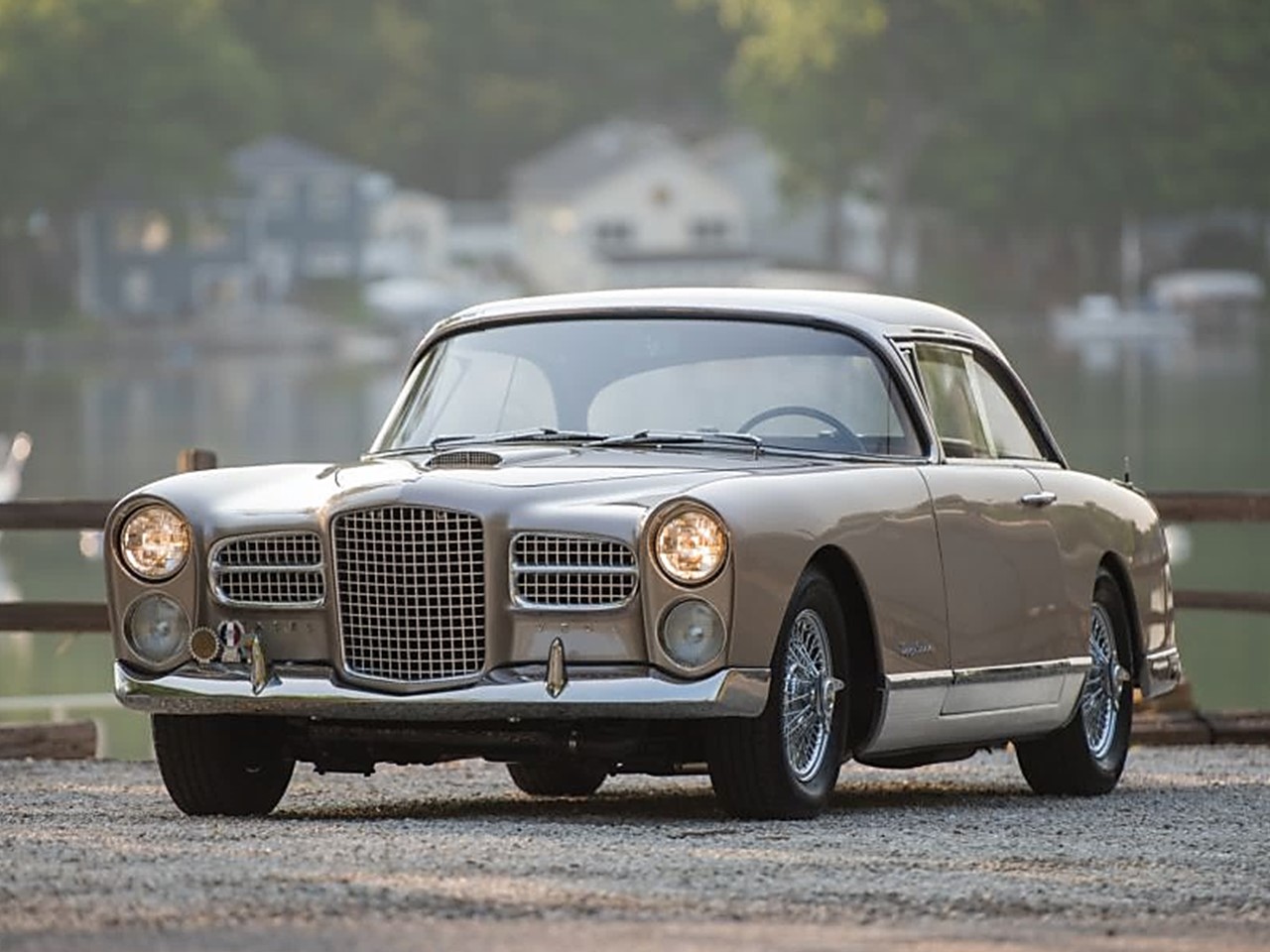 Expensive, stylish, luxurious, and very fast are the attributes of the exotic Facel Vega. These beautiful motorcars eloquently compliment the Neo-Classic era in automotive design. The brand is beyond conjecture, a rare masterwork representing the best of everything that makes a luxury grand tourer irresistible. They are the precursor to contemporary supercars.

Facel Vega could be considered a luxury/performance hybrid in 21st Century terminology. Facel Vega’s advertising campaign slogan read: “For the few who want the finest.” Its mystique remains prominent to the affluent collector. These elusive motorcars attract the true connoisseur who desires something distinctively different. Only 2,897 total vehicles were built during Facel Vega’s manufacturing tenure.

Finale for the brand includes Facel II, Facellia, Facel III and Facel 6 hardtop coupé models. Facel Vega motorcars were built from 1954 until the company ceased production in 1964 when the factory closed. It’s one of the rarest of the rare bona fide classic automobiles. These unique motorcars fetch six figures in today’s collector car market – IF one can be found for sale. Facel Vega is the Parisian on holiday in America…

Jean Daninos (1906-2001) is the founder of the French luxury car firm Facel Vega. He is associated with the last motorcars of grandeur in France. Jean Daninos envisioned Facel Vega as an automotive renaissance. It was to be a revival of the classic French grand marque. There’s nothing plebian about these unusual masterpieces. Facel Vega has a secret behind its overall appearance.

It’s based upon the elegant Bentley Cresta and exotic Ford Comète. Facel guru Fred Kanter calls it a cross between a Lincoln Continental and a Mercedes-Benz 300 SL. They all come together as a resplendent rendition of Franco-American excellence. It takes an acquired taste to revel in the beauty of Facel Vega. It’s a shame the marque had to be an ‘export-only’ venture to exist. Sir Stirling Moss, Tony Curtis, and Ringo Star are just a few of the famous names to own a Facel Vega – Ava Gardner had three of them! 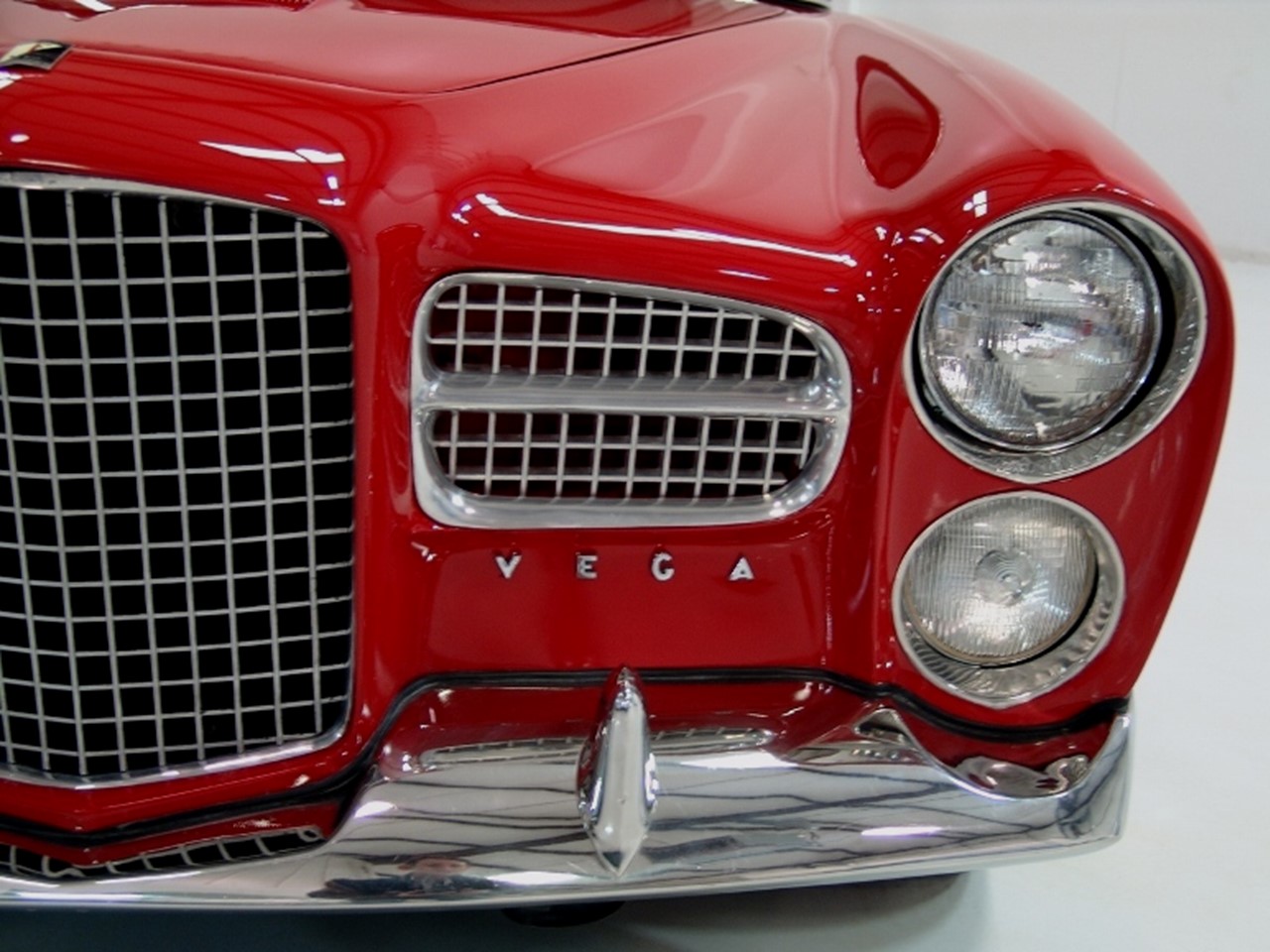 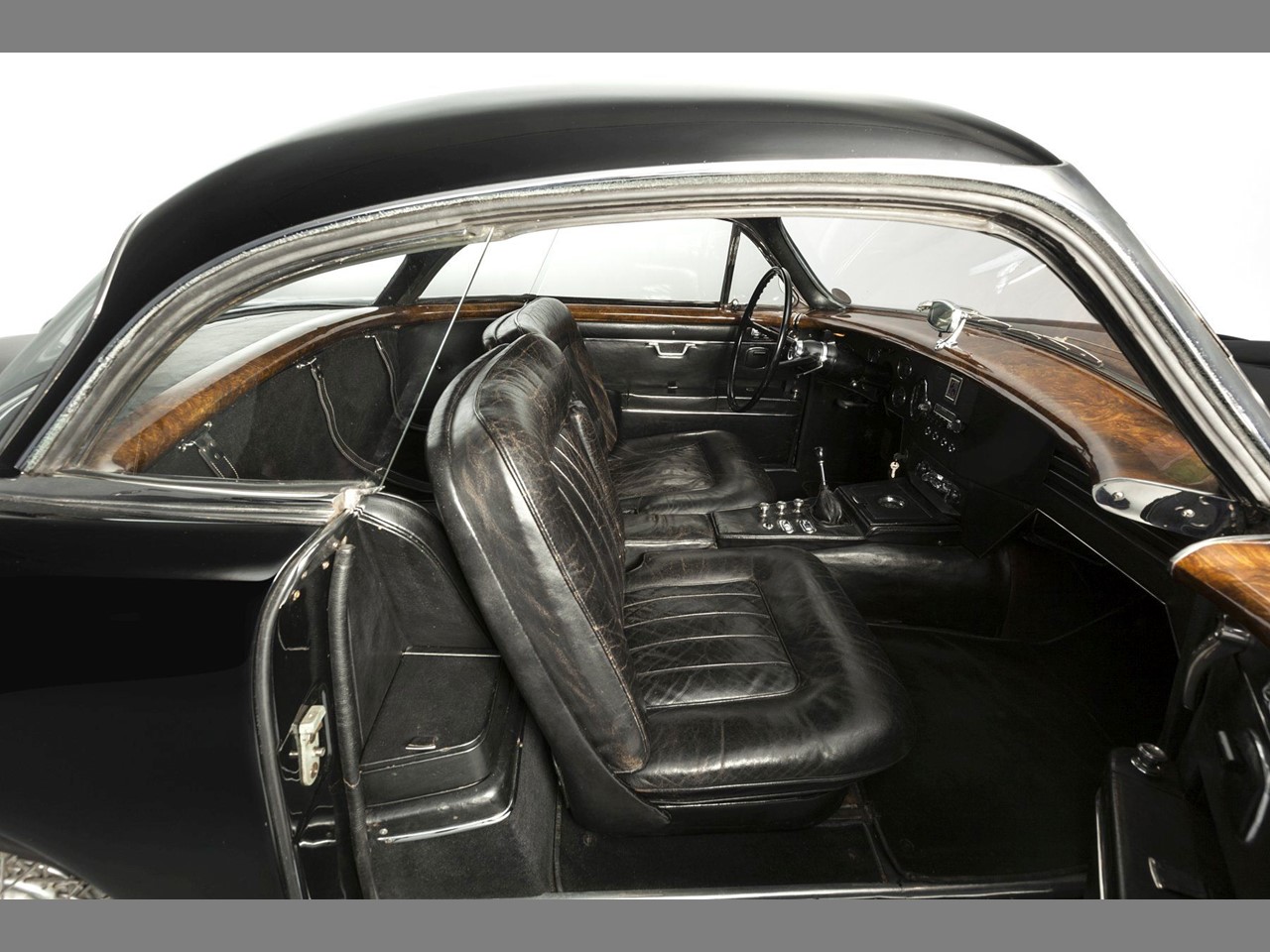 In 1948, a luxury car division was established. They specialized making various Simca Sport models gaining publicity in collaboration with Pinin Farina Design Studio. A special bodied Bentley was built on the Bentley MK VI chassis resulting in the famous Bentley Cresta. The exclusive Ford Comète began production September of 1951 and ended in 1955 when Simca took over Ford of France. 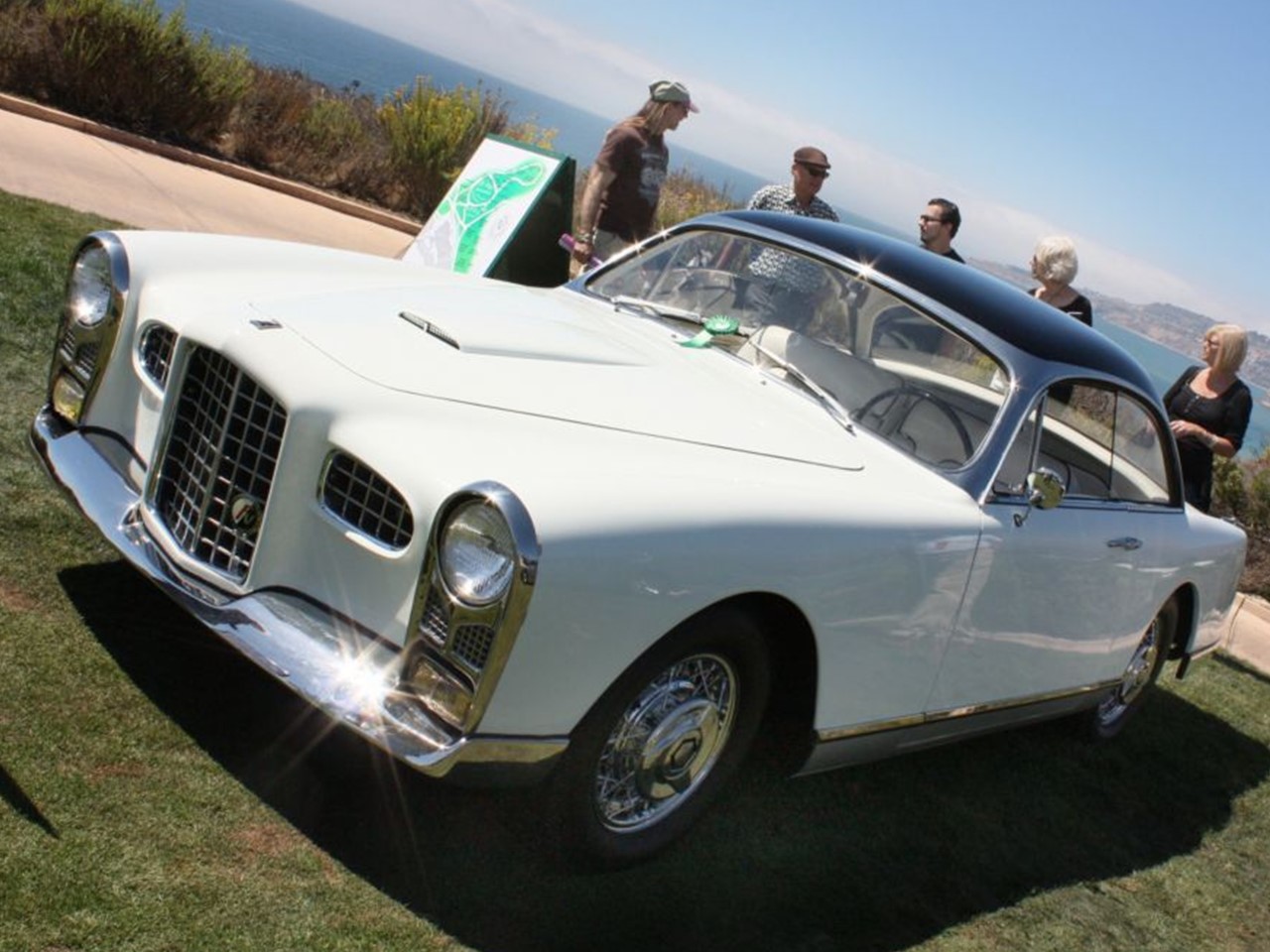 Jean Daninos wanted to build a French grand marque to compete with the luxury grand touring automobiles of the world. He ventured out making these cars using Chrysler V8 powerplants. Volvo and Austin engines were alternatives towards the end of the venture. Daninos gained knowledge during WWII working with General Aircraft here in the USA with experience gained using Bronzavia patents. 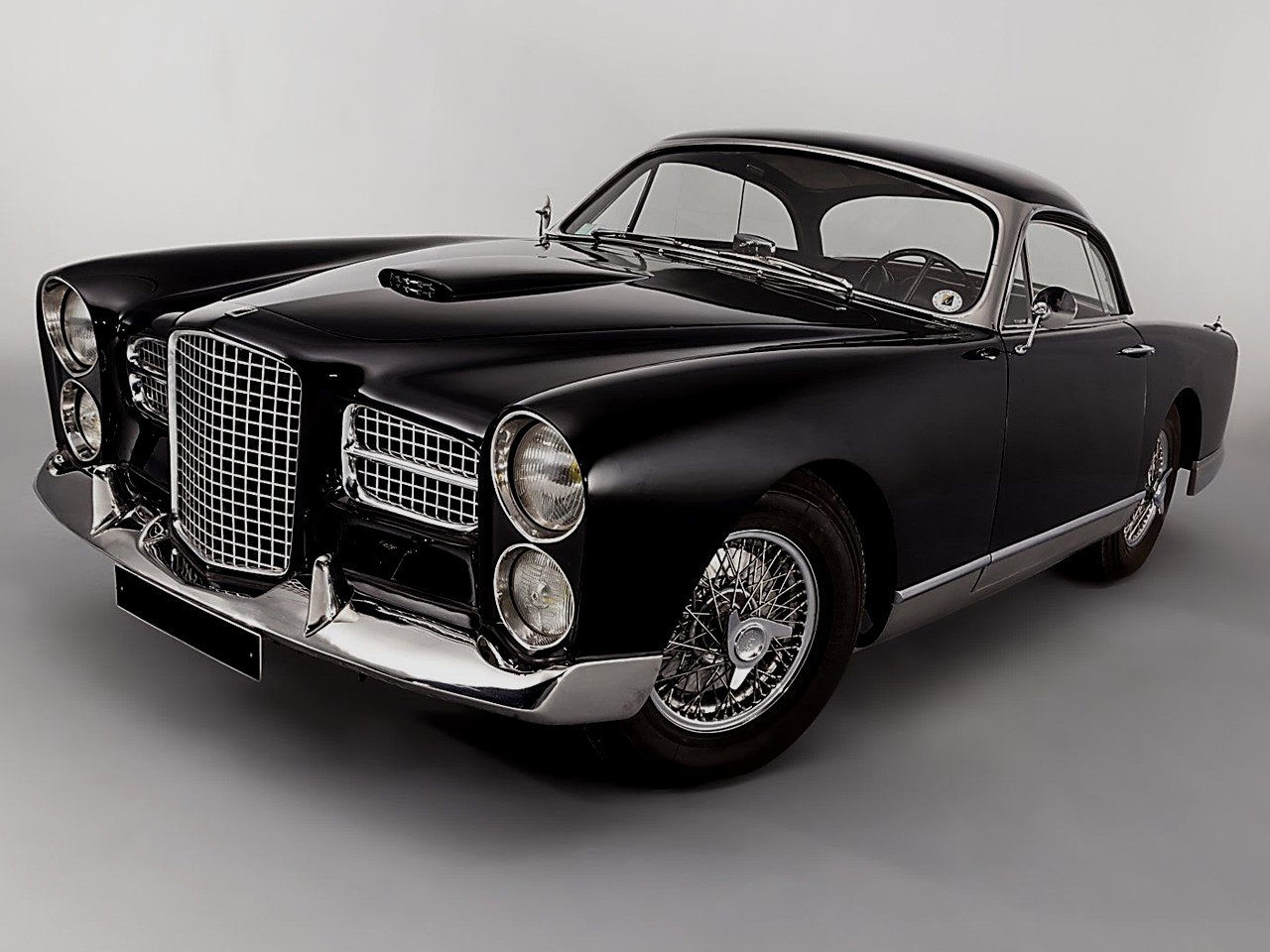 The first prototype was drawn in 1951. By October 1952 the prototype was fully functional and was taken out on the road in the real world for testing. It was sent to Chrysler here in the USA for further testing. Chassis # FV-54-002 is the pioneer ‘Vega’ in its initial stage. This car’s unique tubular frame is designed by Lance Macklin, son of Sir Noel Macklin of Railton fame. Lance is a former member of the HWM racing team with Stirling Moss and Mike Collins.

The super-strength cruciform chassis is a deep-seated combo of tubular and channel steel members. These cross-braced members, some placed diagonally, uses two 3.5” forward side tubes. The insides are welded channel-section steel with forward flanges that broaden at the front. The tubes are curved upward increasing torsional rigidity. The framework is designed to sit deeper into the driveshaft centerline between the wheelbase. These are extremely heavy cars that require this type of backbone. 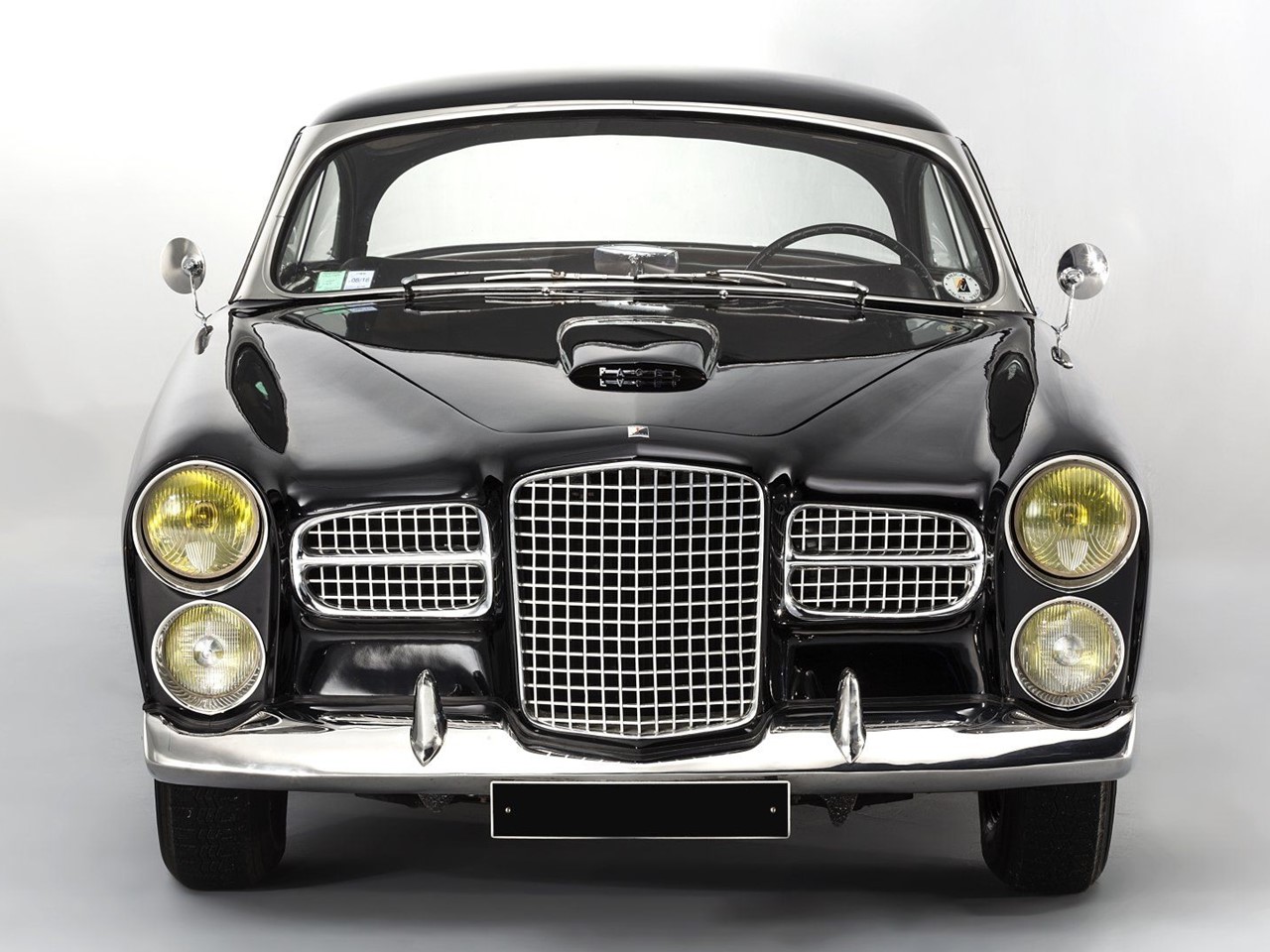 Jean Daninos unveiled the first car in 1954 with the “Vega” nameplate at the Paris Salon. The car was originally painted a shade of light blue-gray with a Brunswick blue roof. It was later refinished in Danino’s favorite livery colors of all black.

The cosmetics were also freshened to reflect the ‘Facel-Vega’ upgrades modifying the headlamp arrangement, and adding the same mesh grille work. This prototype belonged to Jean Daninos himself. It was sold at auction for 226,480 € at Rétromobile 2016 by Artcurial Motorcars – 05 February 2016. Only 46 vehicles were built as “Vega” models for the 1954/1955 model years. 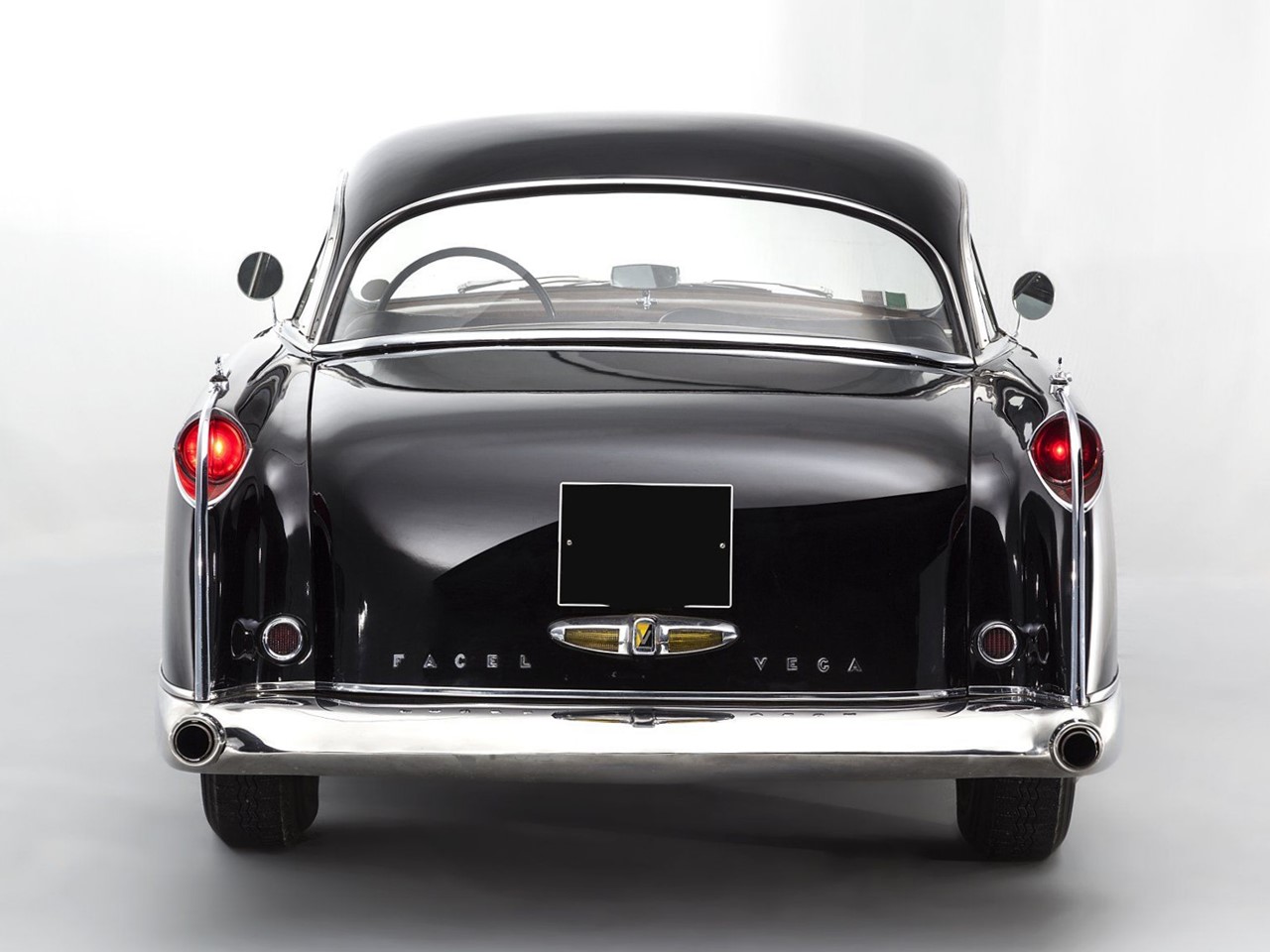 The Vega name was combined with Facel in 1956 to create the ‘Facel Vega’ moniker. The 1956 model year also refined the FV series into the FVS (Facel Vega Sport) and introduced the FV4 Typhoon.  The FVS was built from 1956 through 1957 and only 227 were built, most of these were imported to the USA. Another 130 FVS models were built in 1958 with an increase of 1.5″ in length. 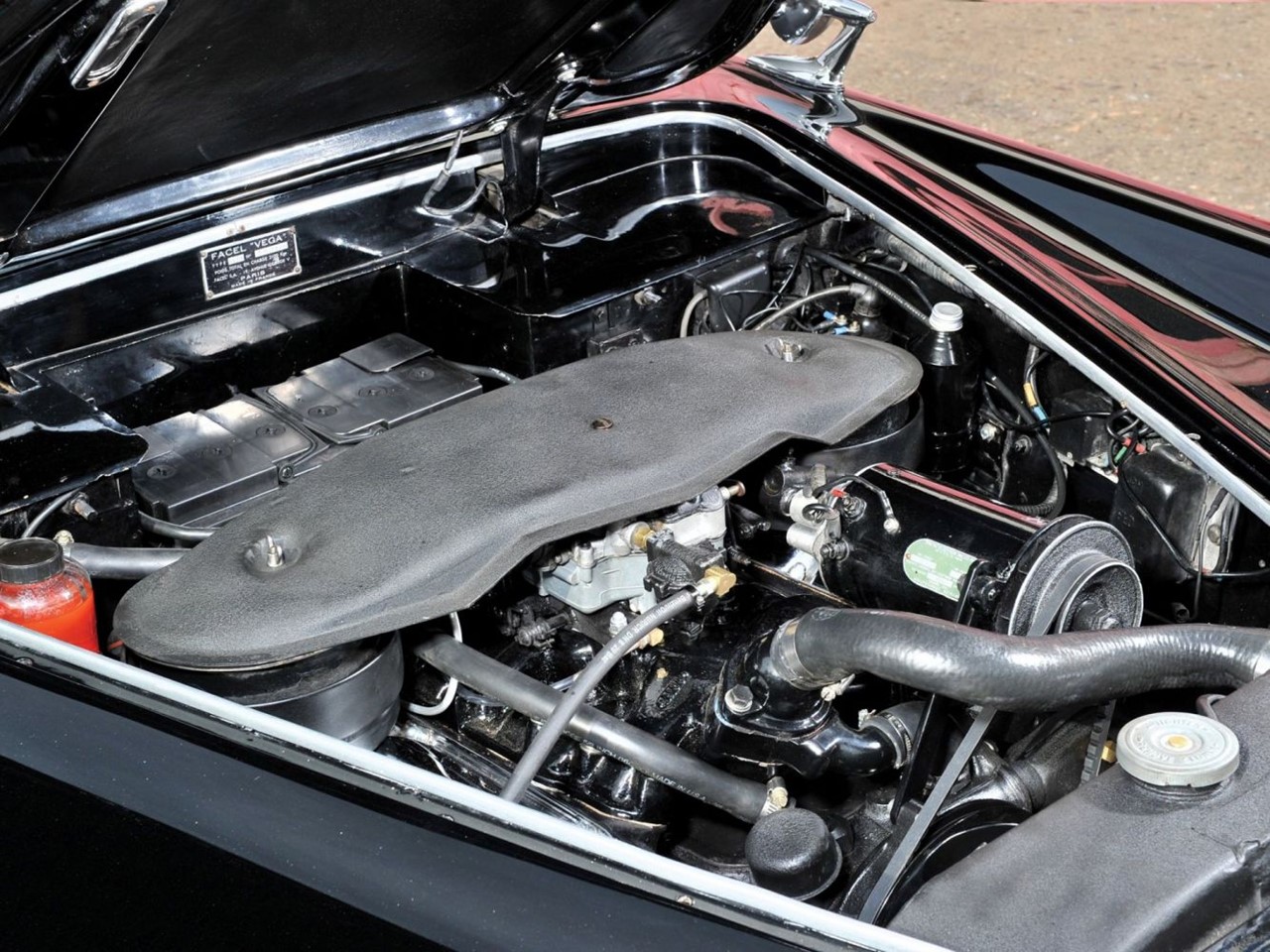 They are unique in every manner built on a tubular chassis featuring coil springs, independent front double wishbone suspension and a live rear axle on semi-elliptic leaf springs with hypoid final drive. Its cam and roller type steering system enables Facel Vega to perform as a true sports car. The beast is brought to a halt via hydraulic 4-wheel aluminium 11” diameter drum-type braking system. Front disc brakes were optional at extra cost.

These exotic beauties ride on classy Robergel genuine long-laced wire wheels. The FV carried a hefty $7000 price tag which was as much as a Rolls-Royce Silver Dawn from the genre. The FVS series had a $7500 base price tag. Prices were expensive to facilitate the double-duty the company had to pay per vehicle. Chrysler parts were taxed upon entry into France to build the cars and another tax upon the completed motorcars exported to the country of the sale. 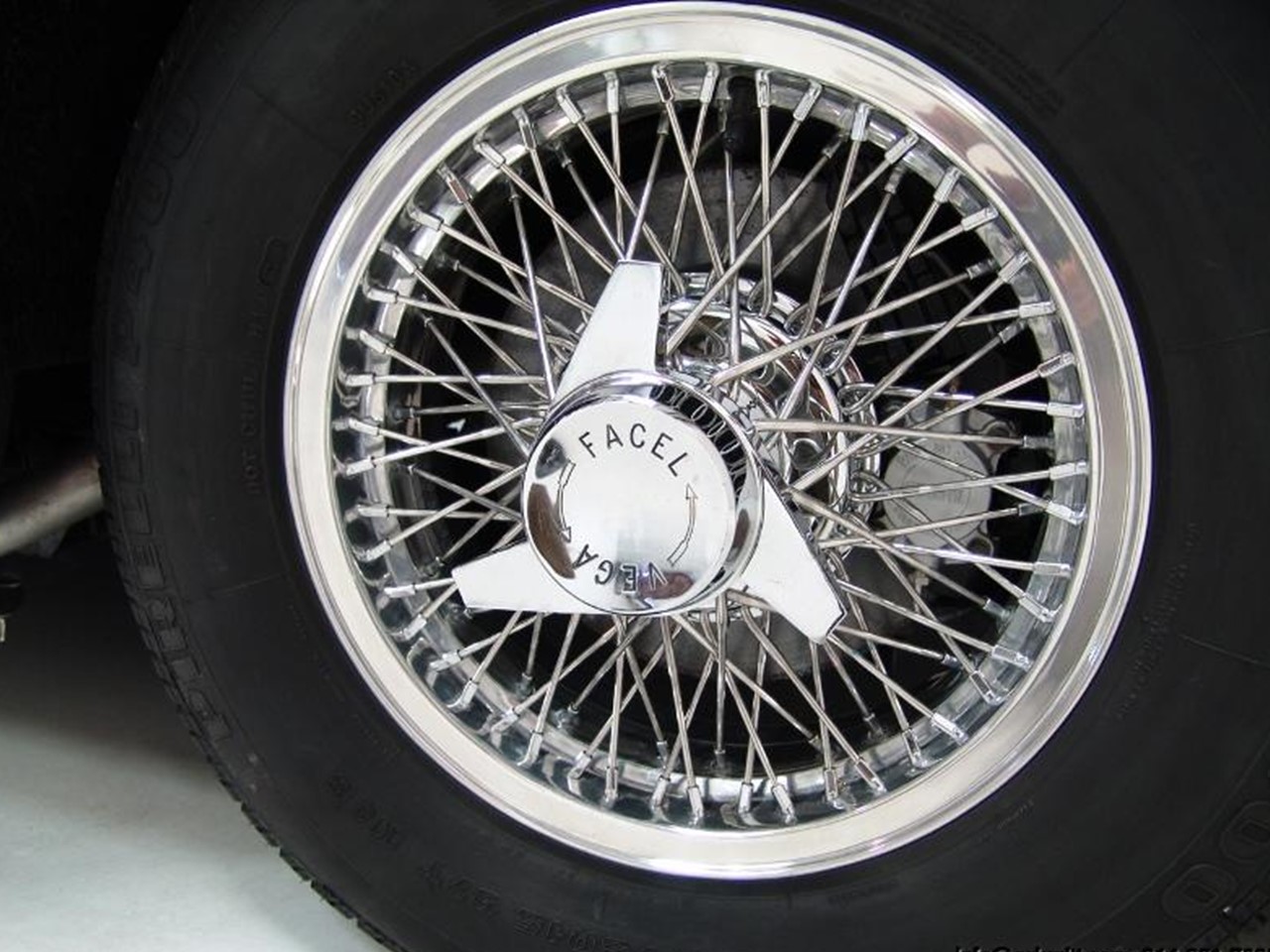 Jean Daninos ‘voiture de sport’ virtues highlight Facel Vega’s cabin in a most felicitous manner. It’s richly upholstered in natural grain handcrafted leather by Connolly Brothers. Plush carpet is under foot lavishly. Daninos creation could be compared to as an American car with European manners. All appointments are gracious, tasteful…nothing seems out-of-place. Its muscular elegance is the best of both worlds…it packs a punch with a velvet-lined boxing glove. These luxury sport motorcars still targets the wealthiest…most ‘en vogue’ clientele in the world…

Two prototypes were built for the FV (1/10/53 & 11/8/54 and another became FV4). Eleven production cars were built from March to May 1955. FV1 had a total of 32 cars 7 of which are convertibles. The FV1 has a longer roofline and overall length. One car received power steering, 27 are built as manual and 5 automatics.

FV3 cars received an improved front suspension. Twenty-eight FV3 models (including one convertible) were built in 1956 and another twenty in 1957. Price increased to 3,125,000 € for the FV3, 12 were built with power steering, 24 were built as manual and the balance of 24 received automatic transmissions. 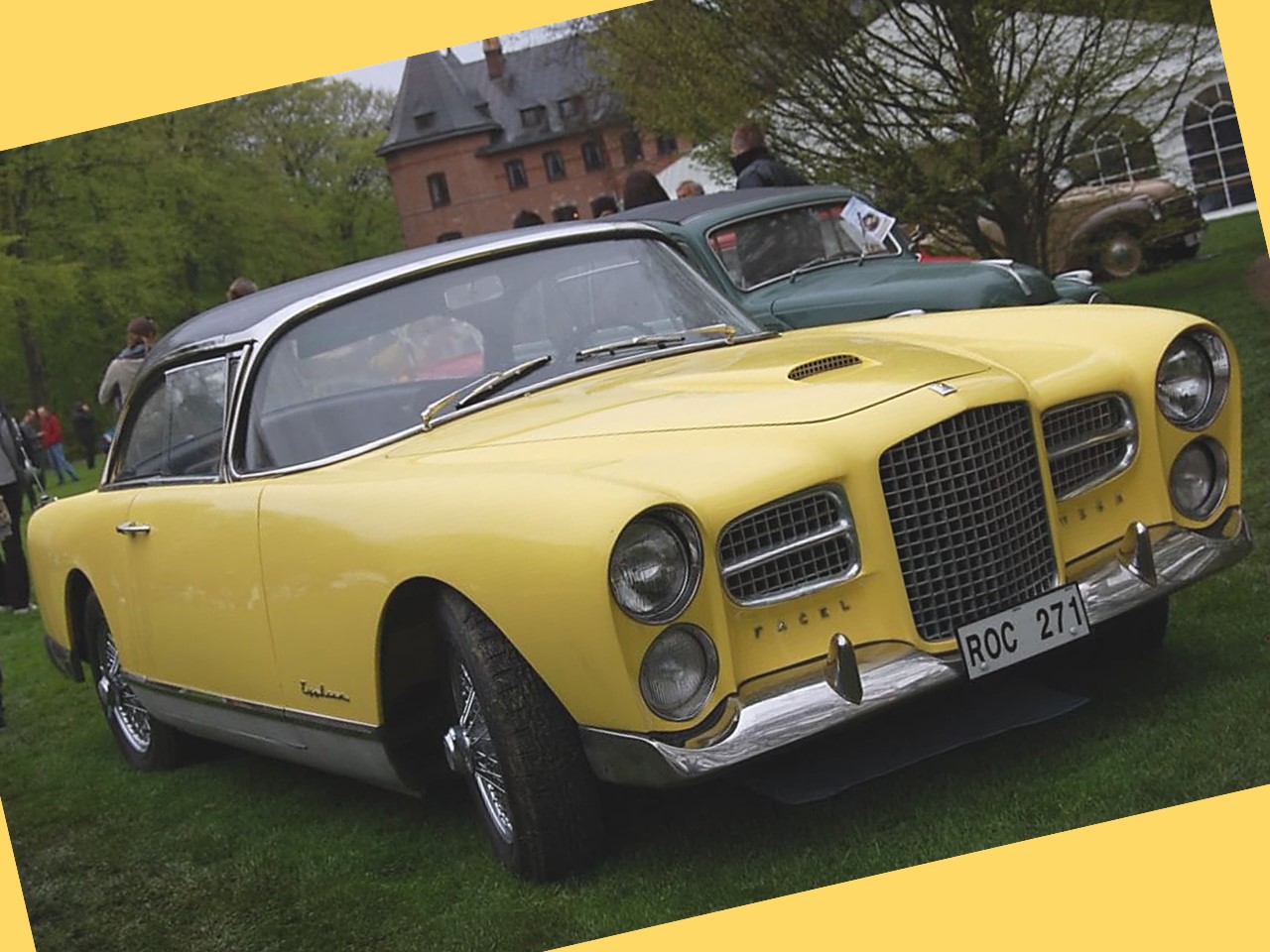 Facel Vega motorcars were sold here in the USA and were imported through two ports of entry. California was the first venture into the states with Charles Hornburg who specialized in Jaguar motorcars on the west coast. Max Hoffman aka the godfather of the import car business, has introduced Americans to more foreign grand marques than anyone else. Hoffman Motors sold the Facel brand on the east coast through 1963.

When I started drafting the copy for this highly collectible motorcar I ran across so many interesting historical facts that I had to re-write this…three times, to make certain I cover certain ideas in-depth. For this reason, I am presenting “Grande Routière Par Excellence” as its own little mini-series. I thought I was the only Facel Vega aficionado until I was contacted by one of my audience suggesting the marque…

OK Chris Bridges out in Los Angeles California in the beautiful U.S.ofA – here’s your fifteen minutes of fame I promised. Thanks for the push! Next, special thanks to Jean-Claude in gorgeous St. Tropez for technical specifications. Pierre in Monaco…thanks for the notes helping me to place facts in chronological order. Special thanks to Artcurial Motorcars of Paris for the use of these classic motorcar photos. It would fill three pages if I were to thank all who added to this tribute. Make sure to read the next dramatic episode. I’ll show you why Facel Vega remains one of the brightest stars in the constellation… 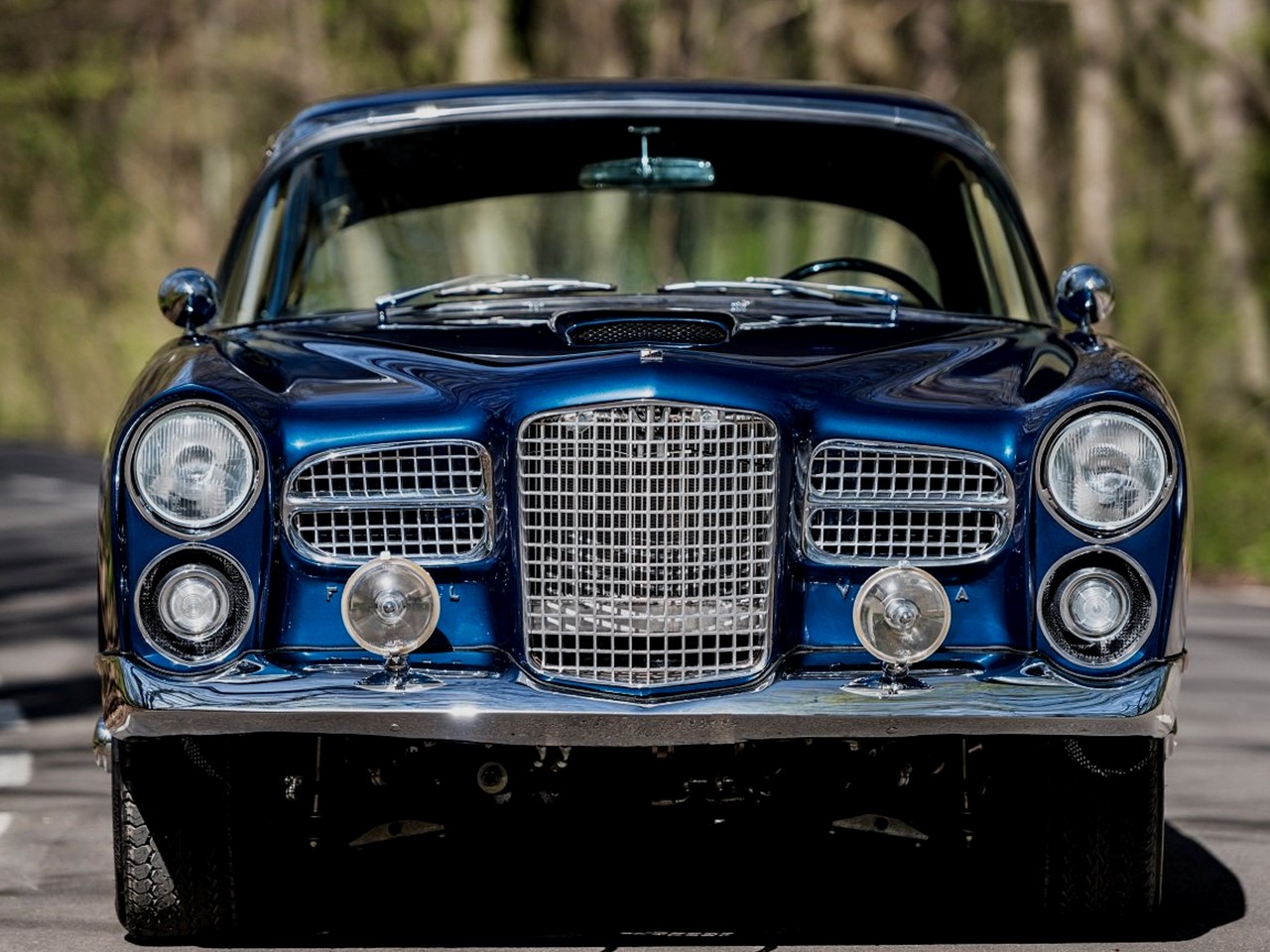