A Mulliner-bodied Rolls Royce is the epitome… 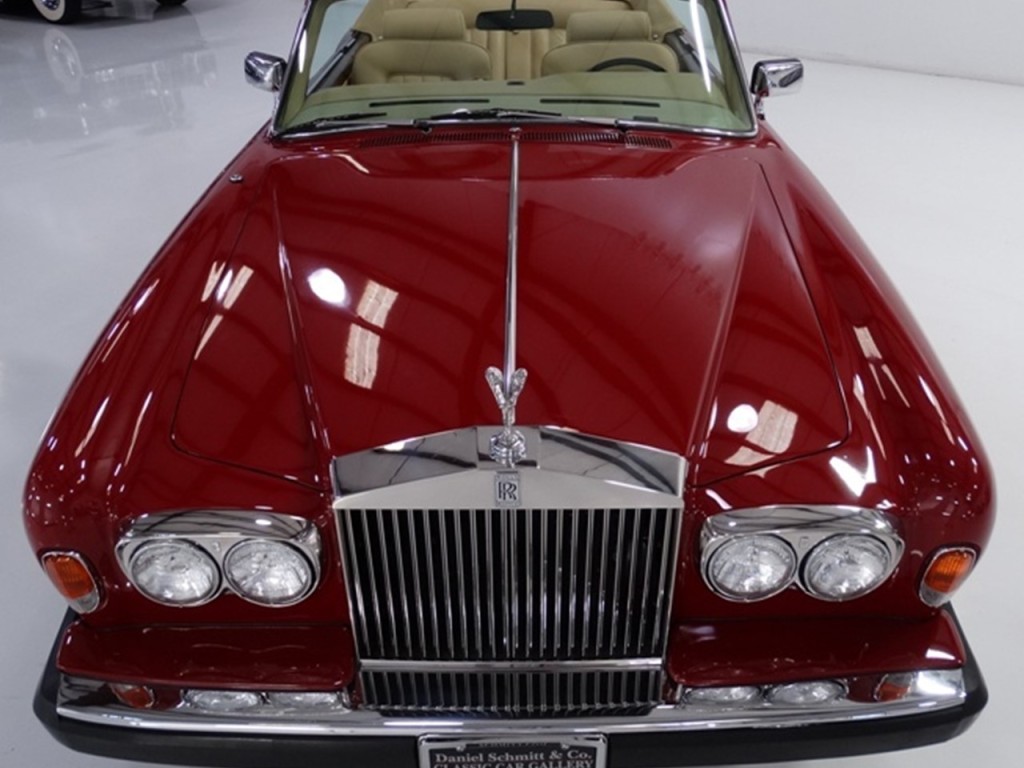 Mulliner Park Ward coachbuilders designed unique works of automotive art. Their Rolls Royce two-door coupe transformations were the absolute pinnacle of distinction. HJ Mulliner and Rolls Royce have partnered since 1939. Mulliner merged with Park Ward Design Studios in 1961 to become Mulliner Park Ward. They took “the best there is” and refined it to superlative. A Rolls Royce is a very special automobile. Mulliner Park Ward escalated the opulence to new heights in exclusivity and supremacy in an ultra-luxury motorcar. 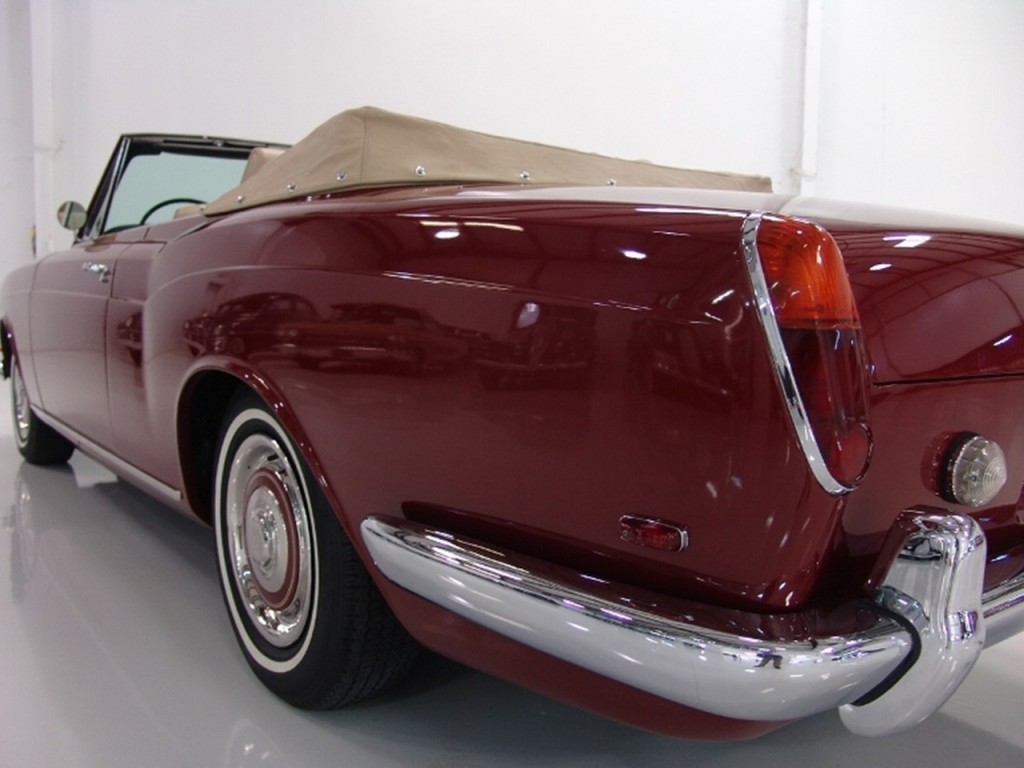 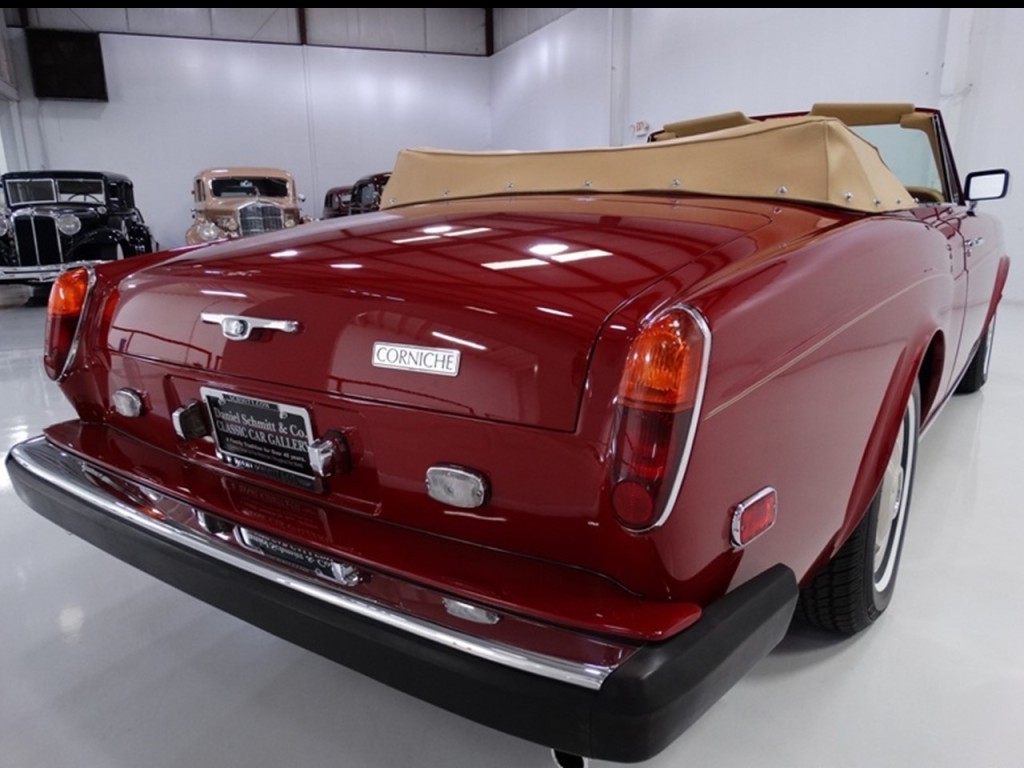 The 1969 Silver Shadow Mulliner Park Ward drop head coupe was one of the exemplary creations of such. It was built from 1966 until 1970. So was the Corniche…the MPW drop head was renamed Corniche in 1971 and ran until production ceased in 1996. The Corniche was a one-of-a-kind masterpiece. Only those who know the meaning of success can fully appreciate the true nobility of the Corniche. The Rolls Royce Corniche was the hallmark of success. 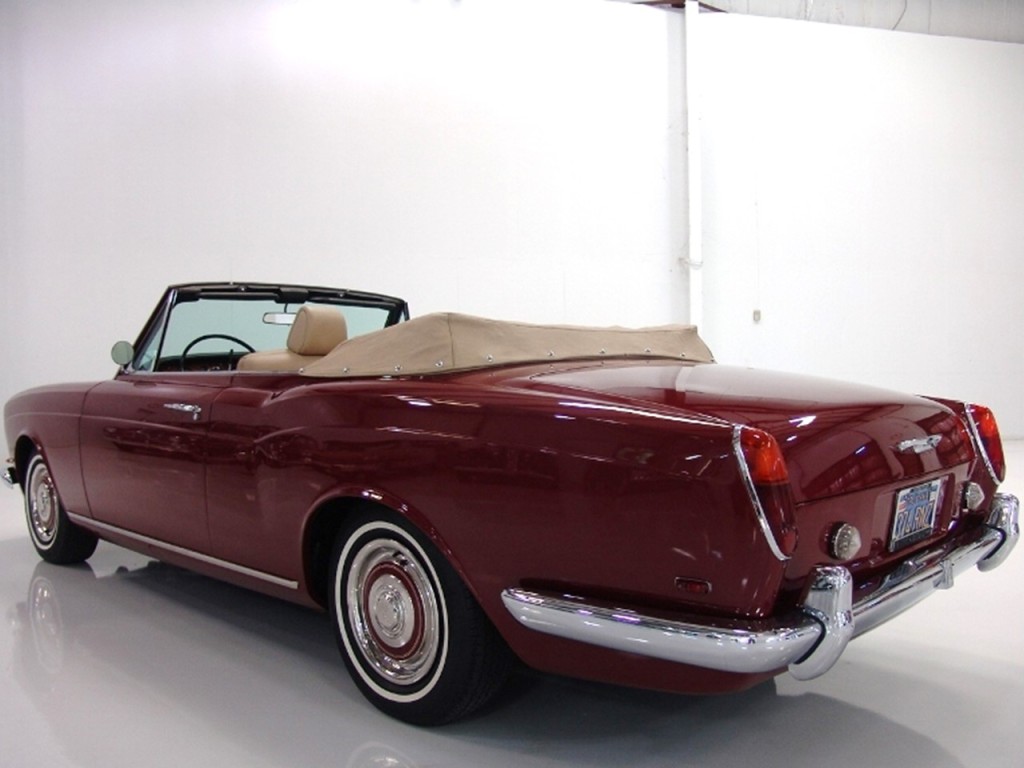 No, you aren’t seeing double and no I didn’t goof. The photos you see are the 1969 Silver Shadow MPW Drophead shadowed by the 1983 Corniche coachbuilt convertible. This demonstrates Rolls Royce dedication to both new customers and existing clientele.

Rolls Royce never redesigned their cars to be fashionable nor trendy to avoid rendering previous versions redundant. Would you want to pay $155,000 for a car only to find out the handy-dandy new version makes your car look like you just left Bedrock…? A Rolls Royce never becomes a used car, it becomes a classic. 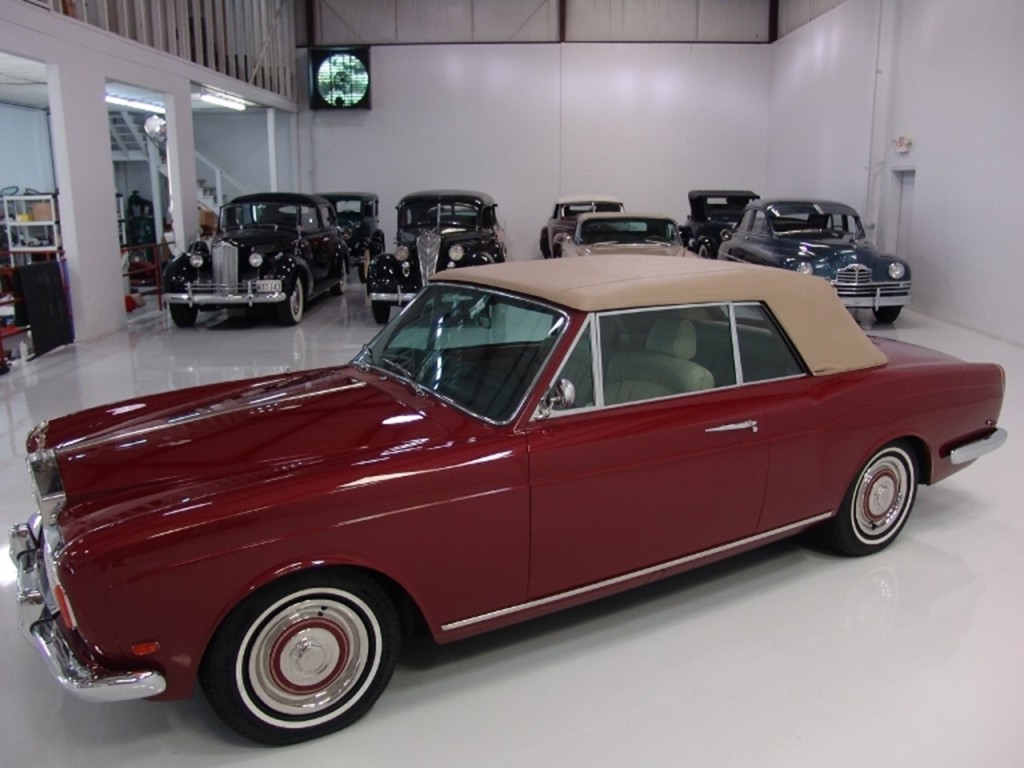 Mulliner Park Ward began the coupe transformation with a Silver Shadow platform furnished by Crewe. MPW would hand-craft every inch of the bodyshell to perfection. The architecture of the MPW drop head was lower than the standard Silver Shadow and was augmented by a graceful “cupid’s bow” incorporated into the rear quarter panels to distinguish it from the standard saloons. Upon completion, the bodyshell was returned to Crewe for underpinnings and running gear. It was then returned to Mulliner Park Ward for expert finishing and bespoke personalization. 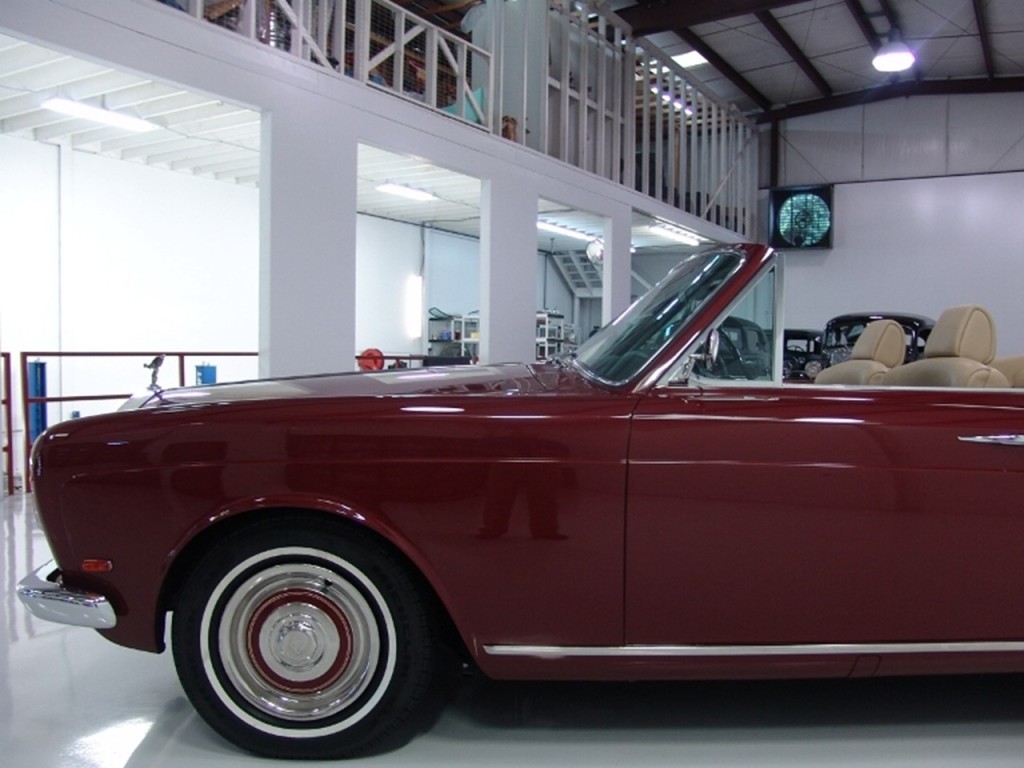 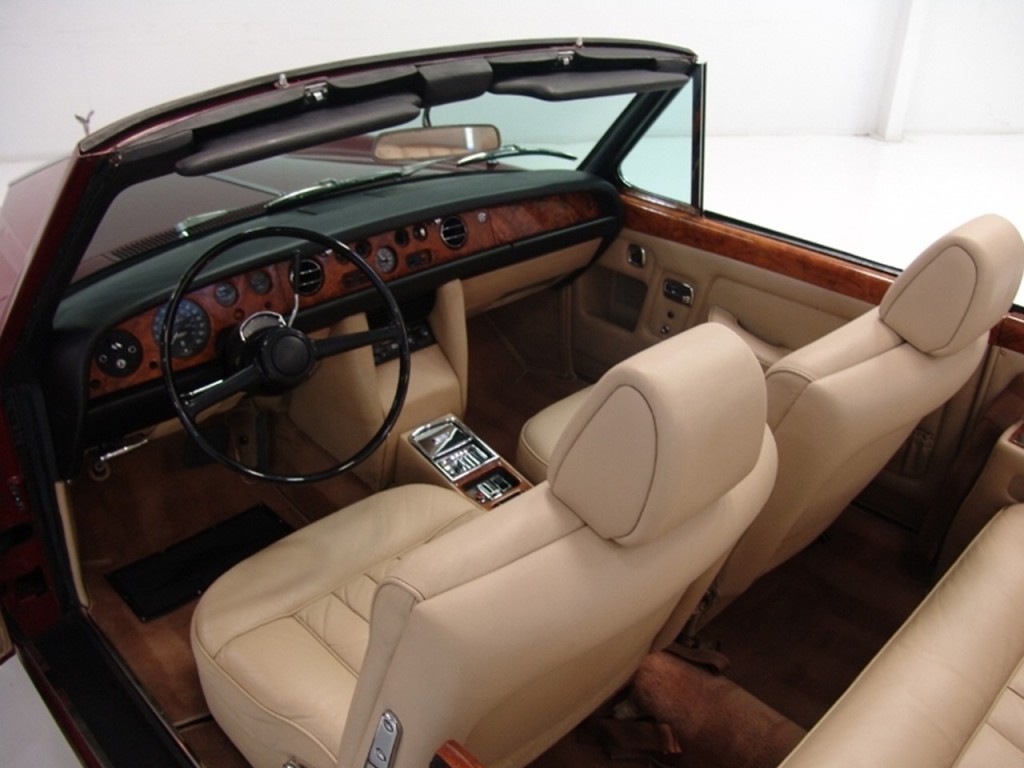 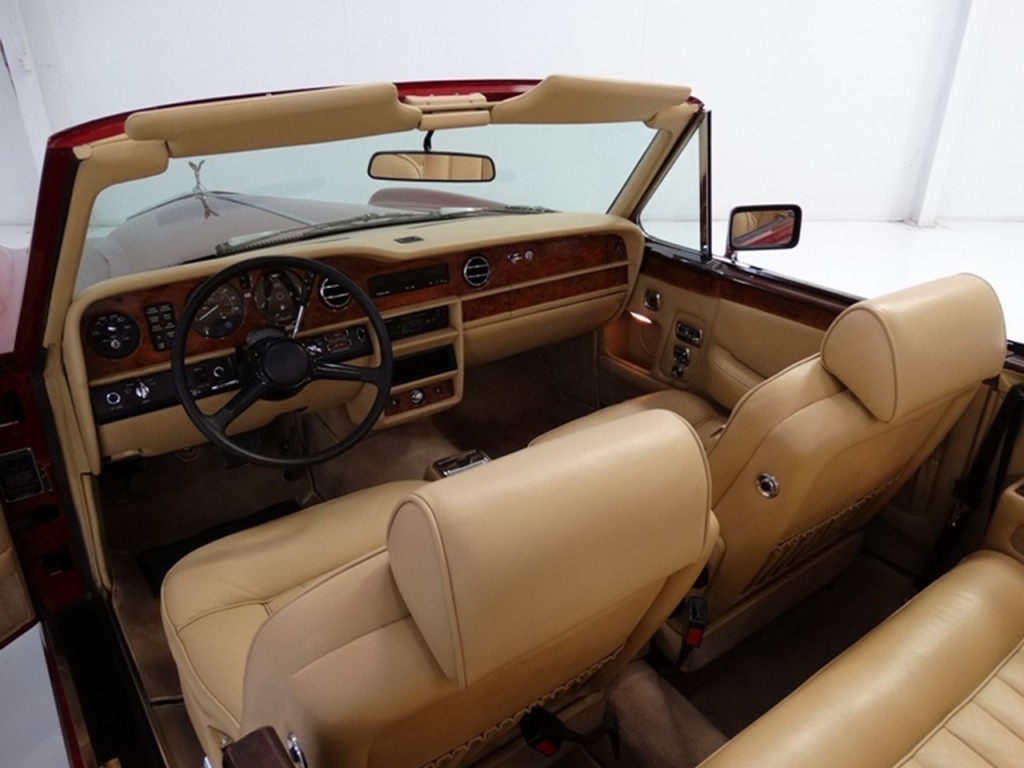 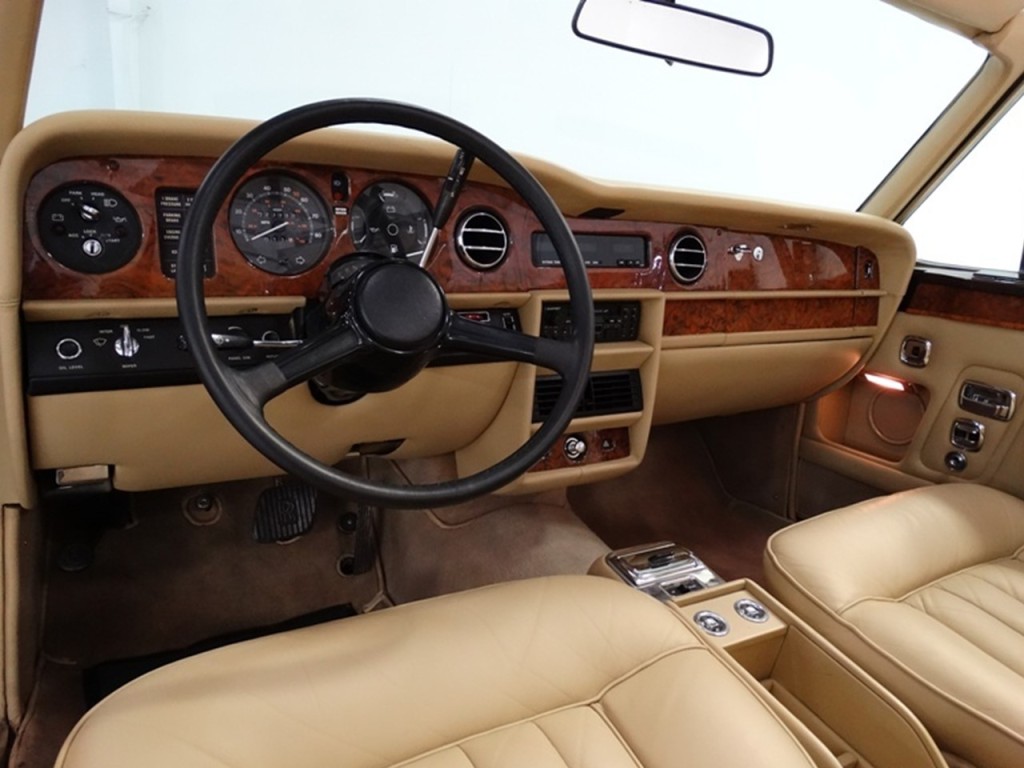 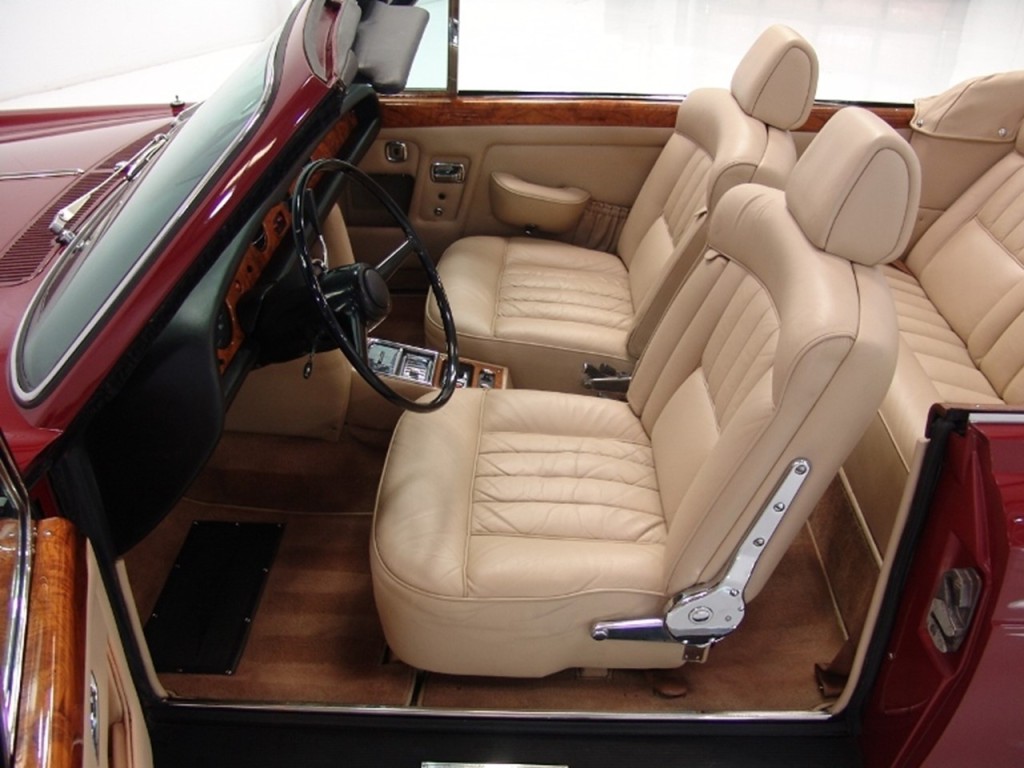 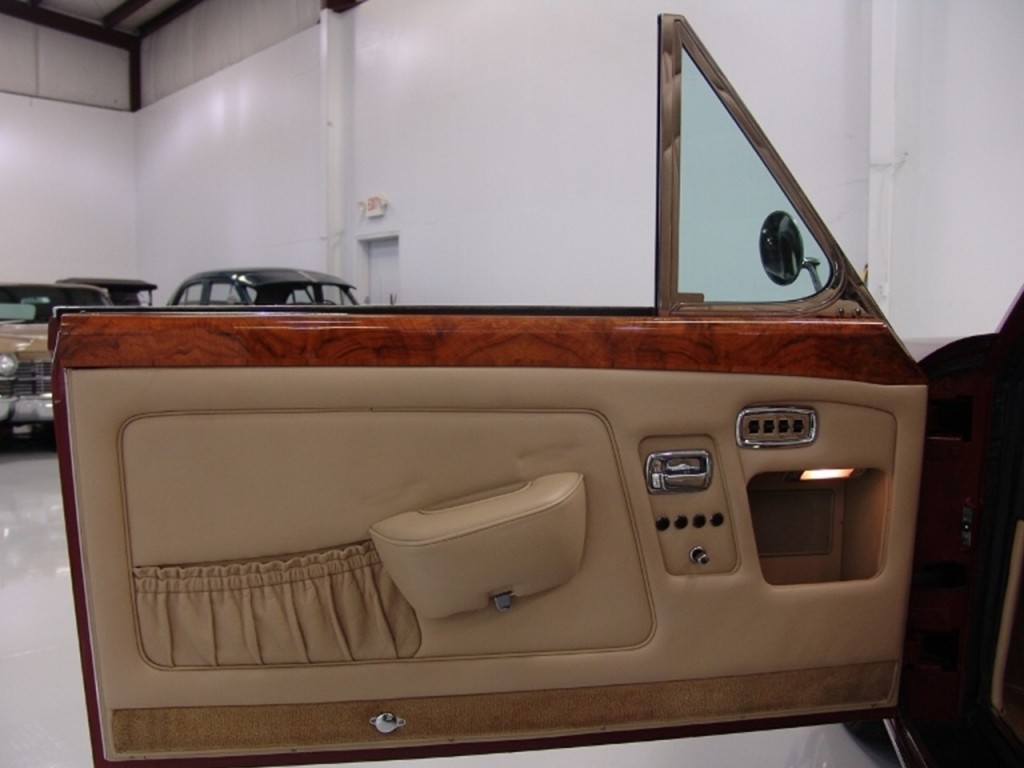 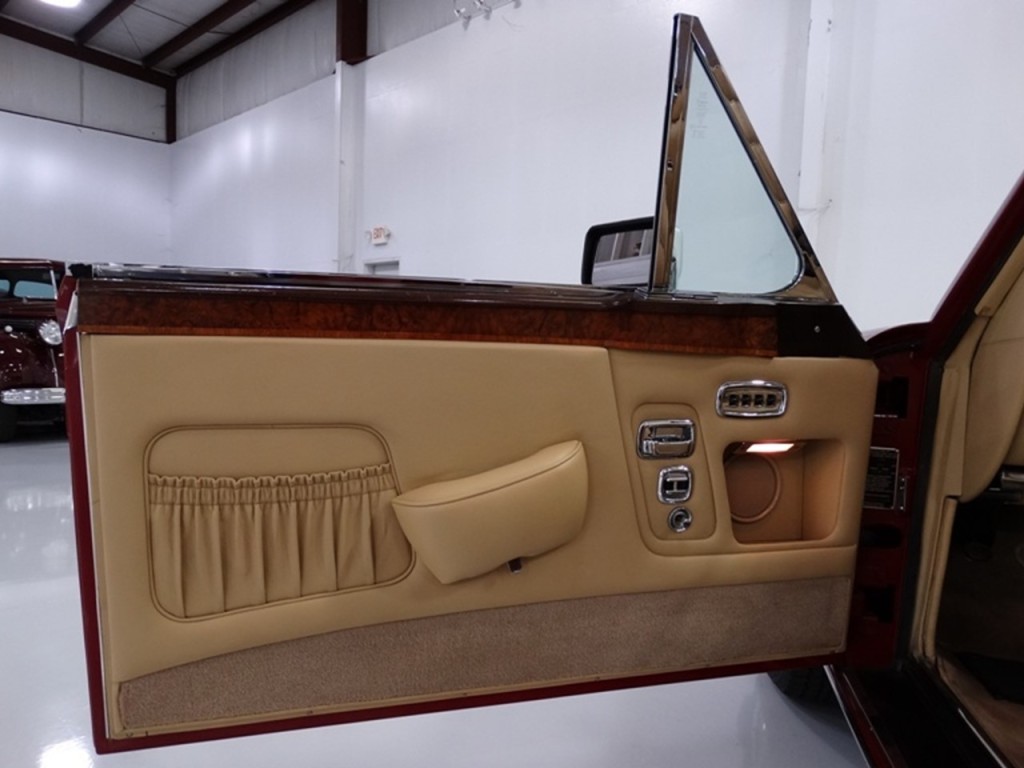 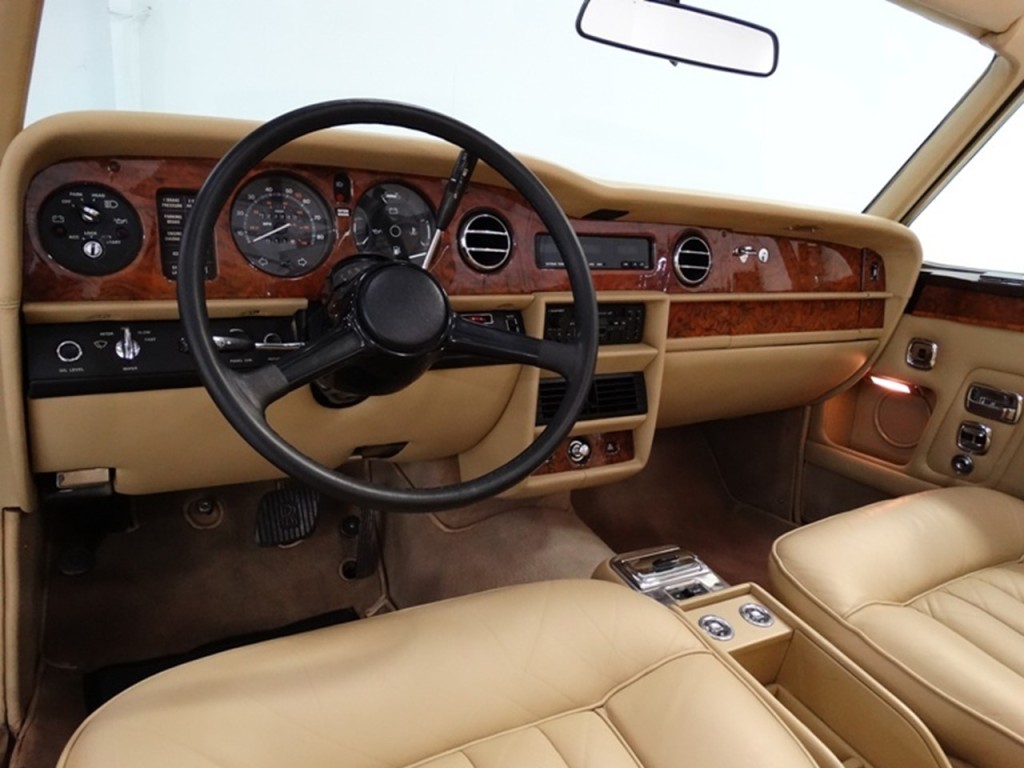 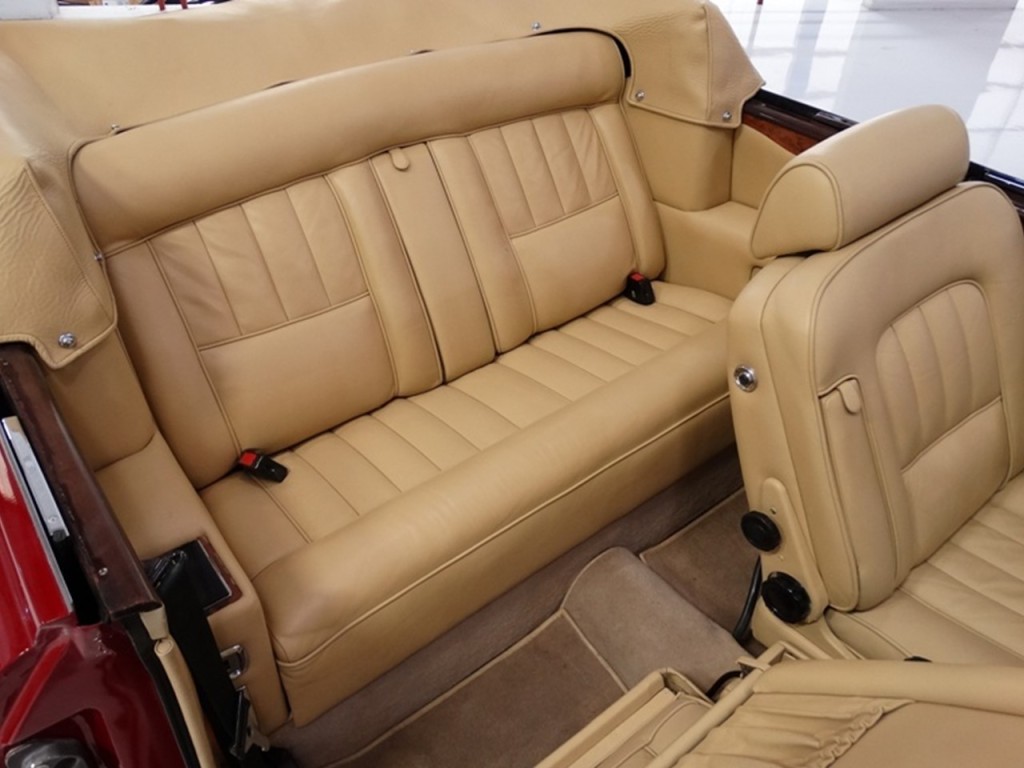 The finest Connolly hides, hand-polished veneers, and lamb’s wool carpets combined with advanced engineering made the Silver Shadow Mulliner Park Ward one of the world’s most elegant and luxurious motorcars.

The 1969 Silver Shadow MPW drop head coupe was the perfect example of tradition and technology. A Mulliner-bodied Rolls Royce was the quintessential status symbol…and will always remain as such with connoisseurs world-wide.

The classic radiator grille with the Spirit of Ecstasy and many other traditional hallmarks of a Rolls Royce were apparent. In its authority, power and elegance the Silver Shadow Mulliner Park Ward drop head coupe confers satisfaction and pleasure unique in the world of luxury motoring. 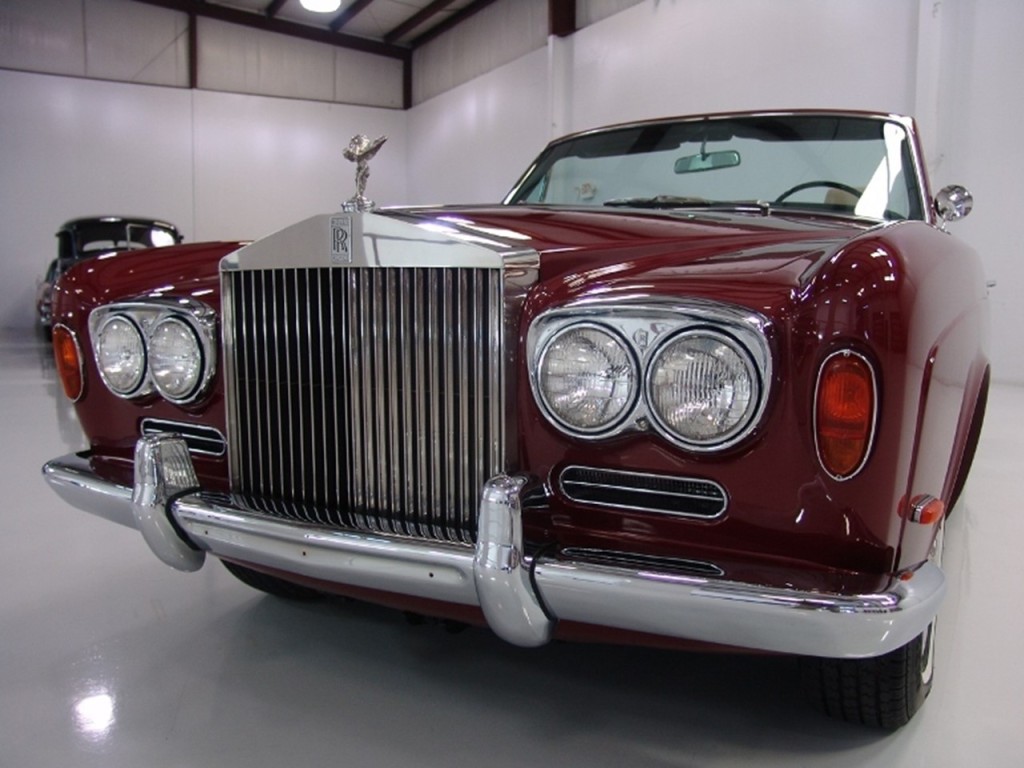 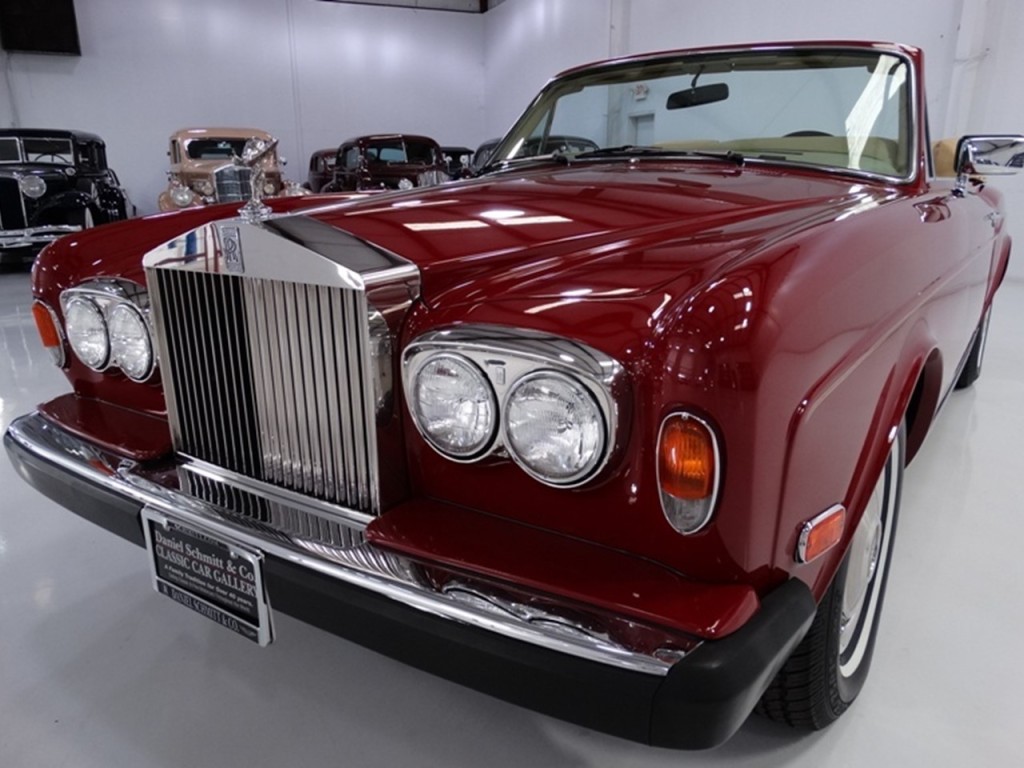 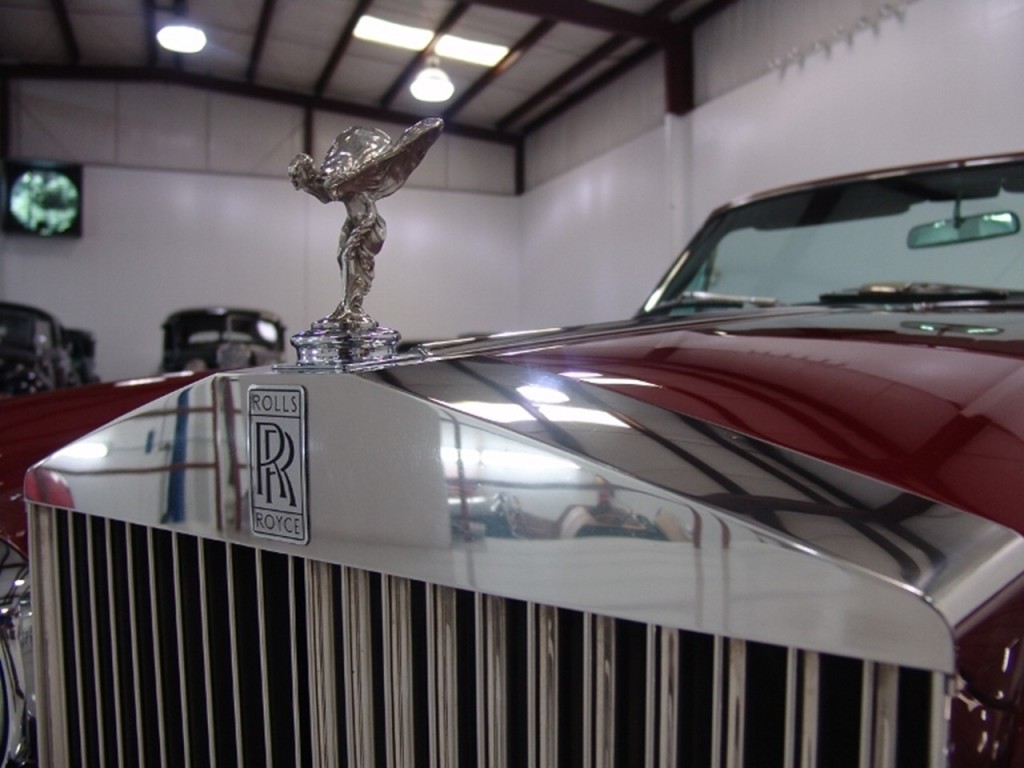 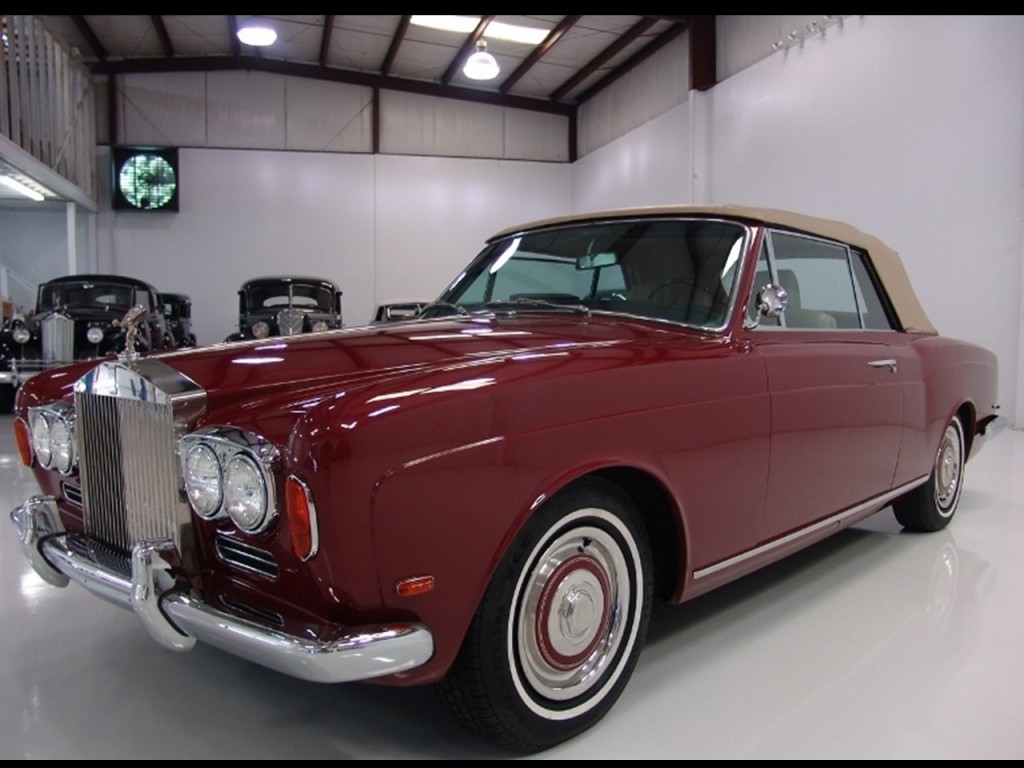 The crowning glory of the Mulliner Park Ward drop head was its fully automatic power hood. It’s a fine example of the craftsmanship in which trimmers painstakingly master the job with skill and quality materials.

The broadcloth headlining is pre-tailored then hand-stitched into place. All convertible hardware was cleverly concealed. It appeared to be a hardtop. The exterior roof mocks the hardtop and it takes the eagle-eye to spot the difference. With the layers of padding, the roof takes on a custom appearance covered in Everflex.

It isn’t as easy as it appears…the shining steel and aluminium bodyshell of the Mulliner Park Ward drop head was built by some of the most uncompromising craftsmen on the planet.

For three days the artisans did nothing but search for flaws and imperfections. They would use highlighting fluid…hands, eyes, intuition…with the expertise of a concert pianist to find the tiniest imperfection.

The painting alone for the bodyshell takes three weeks depending upon color. They would hand-polish every inch after each of the 14-20 subsequent coats of primer, filler, and the actual finish. No vehicle left Mulliner Park Ward with issues, but then they worked with the best there is!

The Silver Shadow MPW had to be driven to experience the rare richness of its Rolls Royce heritage. It was one of the world’s most elegant personal luxury cars. To drive it was like…whisper, tick, soar…the loudest sound one will hear in a Rolls Royce is the beating of their heart…

A Rolls Royce doesn’t roll along it glides…on the open road it soars effortlessly, silently. The Spirit of Ecstasy adorning the iconic radiator grille appears to be soaring in flight to add to the enigmatic Rolls Royce experience.

The Mulliner Park Ward drop head was for men and women of exceptional taste who desired a sporting grand tourer without sacrificing luxury and elegance. The Silver Shadow Mulliner park ward was endowed with impeccable road manners that harmonized with a ride that was quiet, smooth, and seemingly…effortlessly.

The 1969 Silver Shadow MPW was powered by the Rolls Royce 6.2 litre 16-valve V8 engine. Its block and cylinder heads were made of aluminium alloy. The engine was mated to GM’s Turbo Hydra-Matic 400 series automatic transmission. The engine delivered 172 hp and was used in the Silver Shadow from 1965 until 1969.

Innovative features included its monocoque construction, 4-wheel disc brakes instead of servo-drum type, and an independent hydraulic self-levelling suspension. It used a high-pressure hydraulic system that not only operated the self-levelling suspension, it also powered a dual-circuit braking system that facilitated independent front and rear operation.

The system was pressurized by engine-driven pumps. The front levelling system was discontinued for 1969 models onward because it was the rear suspension that did most of the work. This achieved a high degree of ride quality. The Silver Shadow series were technological advancements for Rolls Royce during inception and production.

The Silver Shadow Mulliner Park Ward drop head coupe was for the individual who was looking for more in an automobile than stamped sheet metal and assembly line protocol…a Rolls Royce is one of the greatest satisfactions left in our world of mediocrity and mass production.

Rolls Royce will always adhere to a somewhat old-fashioned commitment to doing things as well as can be done. Machines can make motorcars identical…but only craftsmen make them perfect. “The quality will remain long after the price has been forgotten.” Now add the Mulliner Park Ward charismatics which now equates it to masterpiece. The blue chips always cost more…only because they’re worth it- 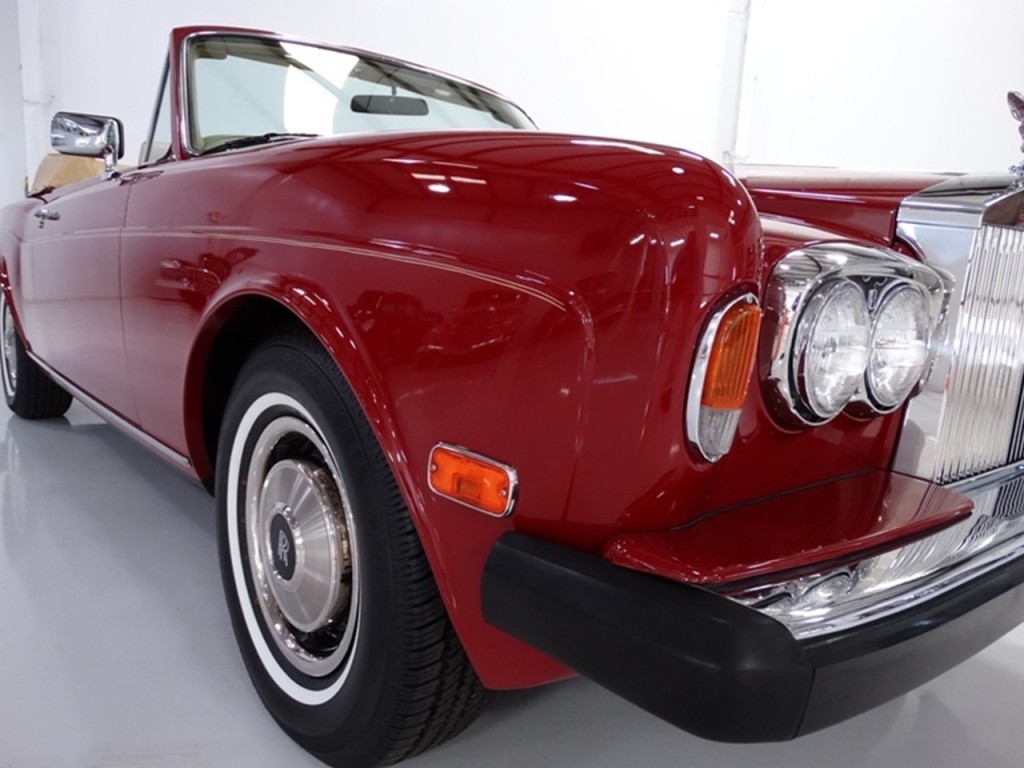 Thanks to Daniel Schmitt Classic Cars 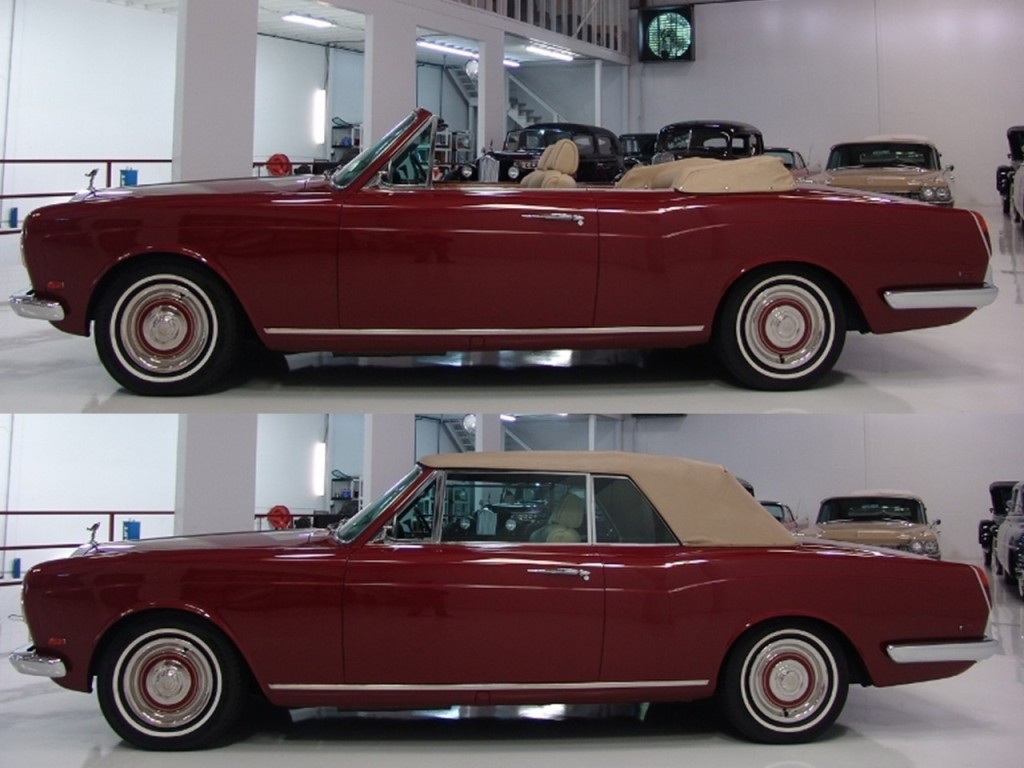 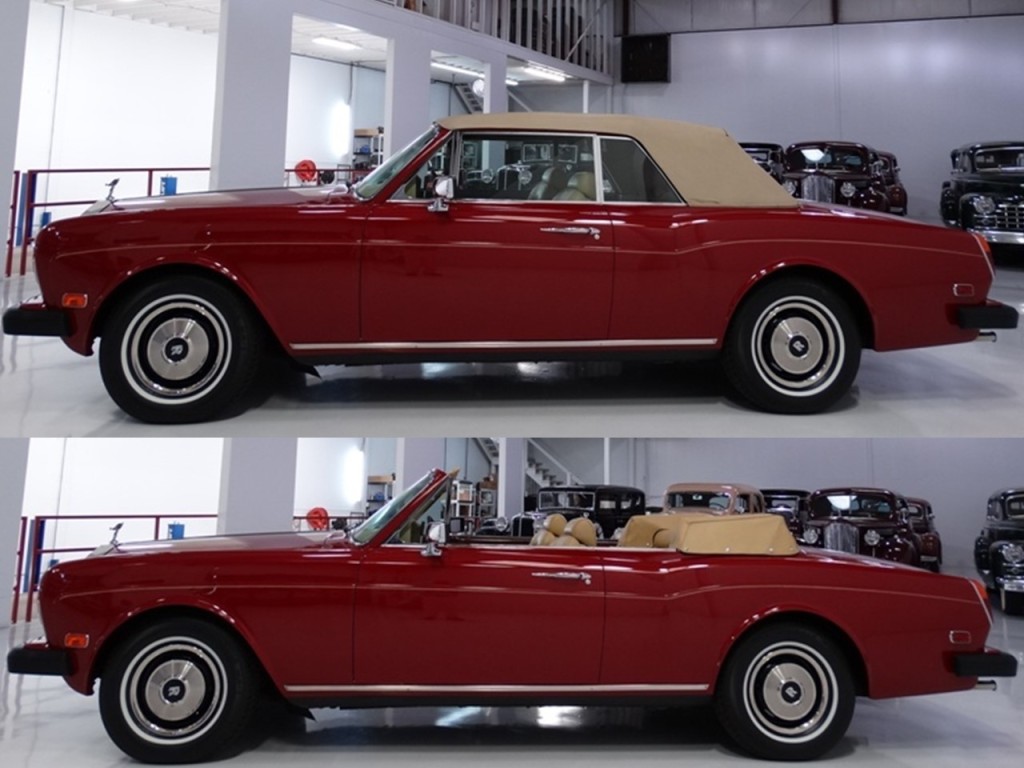 One thought on “The Mulliner Park Ward Experience” Leave a comment ›