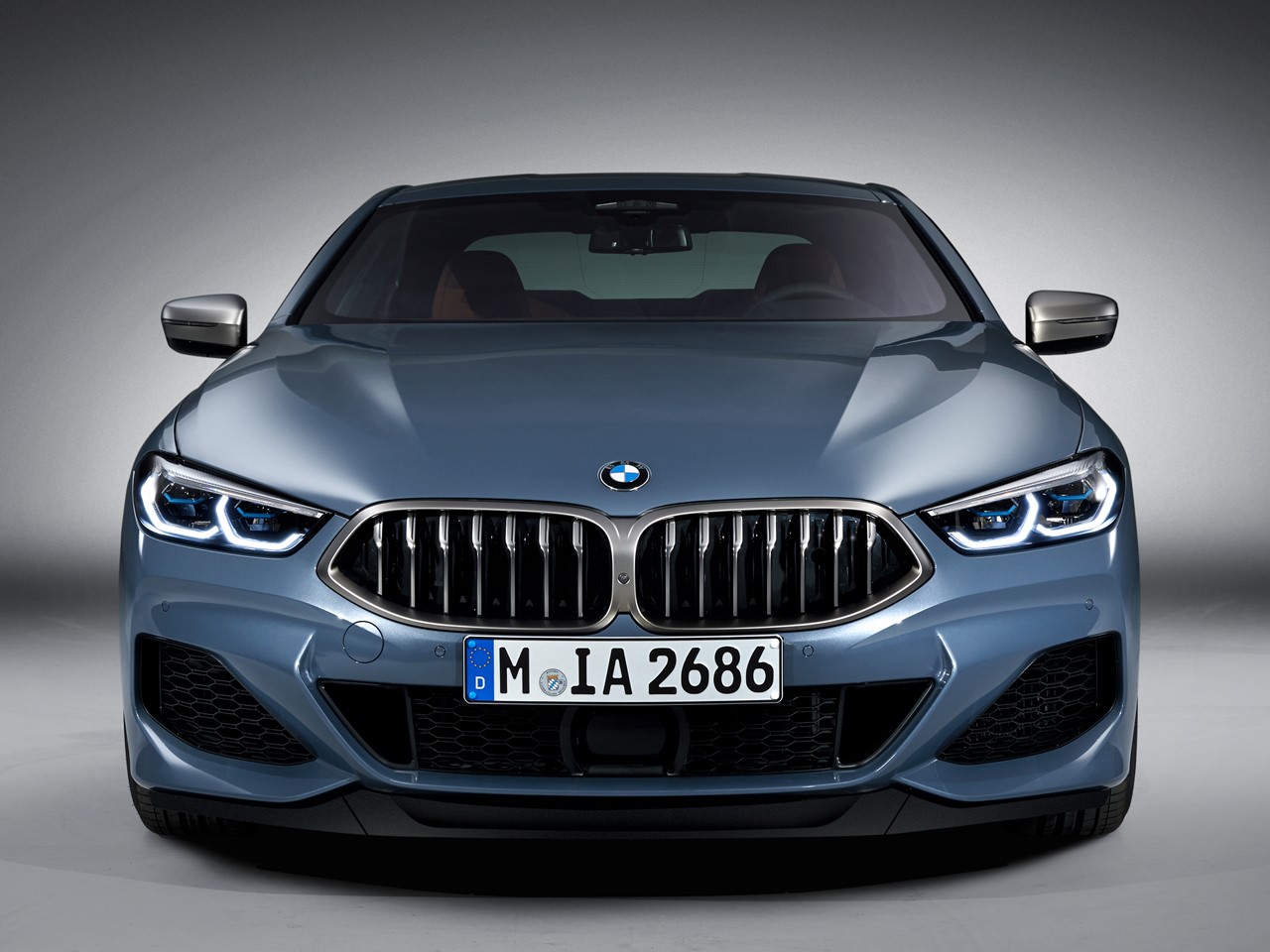 We’ve waited with bated breath for a new flagship 8-Series BMW. That time has finally arrived. The contemporization is a confluence of cutting-edge technology with an introduction to BMW technological advancement in the works for future applications. The heart and soul of this masterpiece is a refined 4.4 litre V8 engine yielding performance to rival that of a V12. The M850i xDrive coupé left an indelible impression October 4th thru the 14th at the brand’s exhibit during the Mondial de l’Automobile 2018 show in Paris.

BMW previews new vehicle interface with technology reshaping the future of personal mobility. Since 1929 BMW has built automobiles of innovation and design excellence. Their philosophy is “A better car makes a better driver.” The all-new 8-Series brings car and driver together with new sophistication and elegance personifying the BMW relentless quest for perfection. The motorsport-inspired M850i xDrive coupé is imbued with intelligence and intuition that will intrigue the devout BMW 8-Series enthusiast…what a way to become empowered/M-Powered! 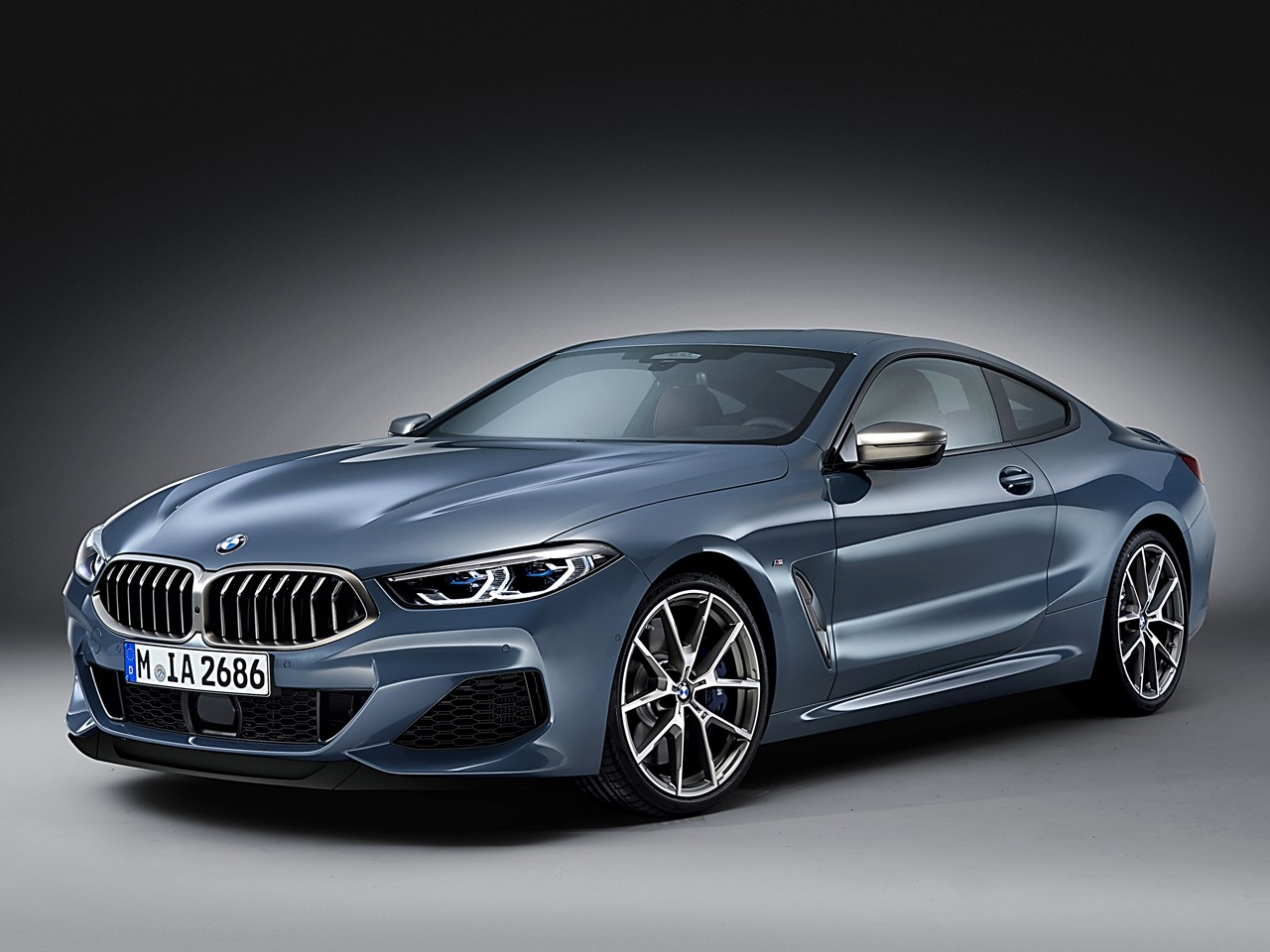 The Mondial de l’Automobile 2018 introduces production models due to launch in the near future. BMW is gridding for a different kind of battle in the luxury car segment as witnessed by the new 8-Series innovative character. Its exclusivity is highlighted by ultra-advanced control and display, driver assistance, and universal connectivity. 8-Series dynamics deliver a high-performance experience with emphasis on luxury placing the driver in complete control. Body structure, powertrain, and chassis technology work together with the driver optimizing the driver/car interface. The new 8-Series is the latest example of corporate’s continuing saga of “NUMBER ONE>NEXT” with copious amounts of cutting-edge technology – 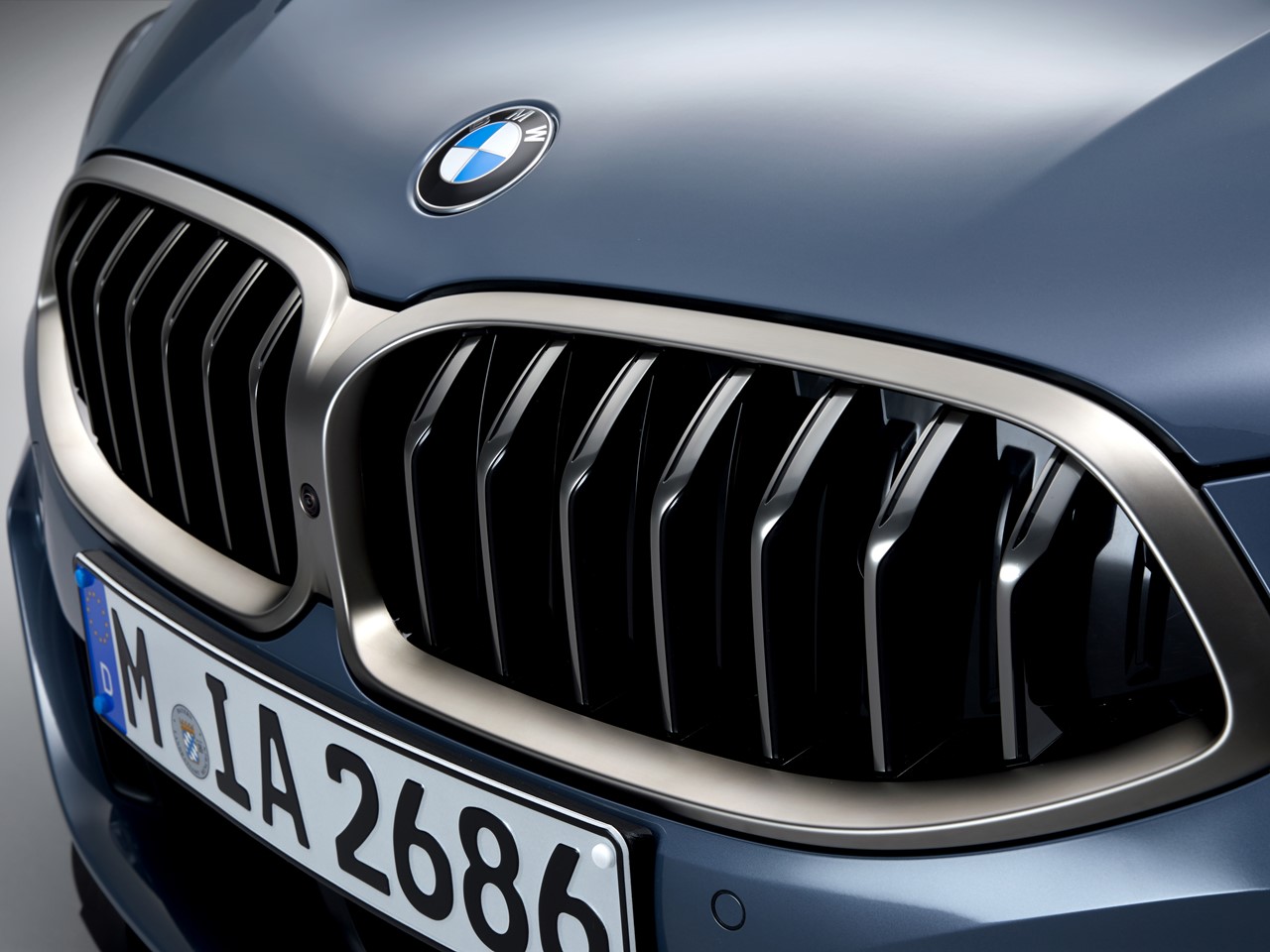 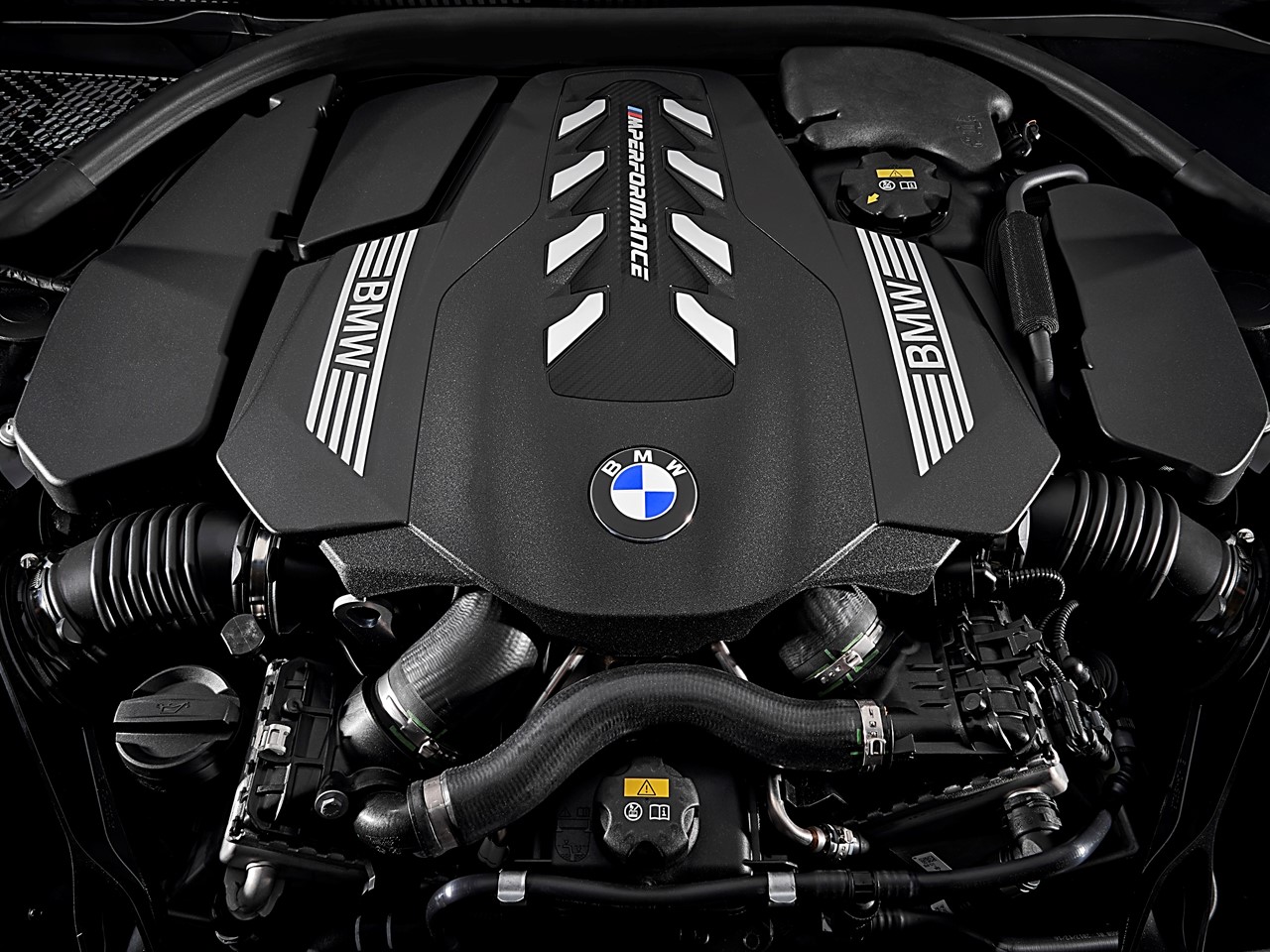 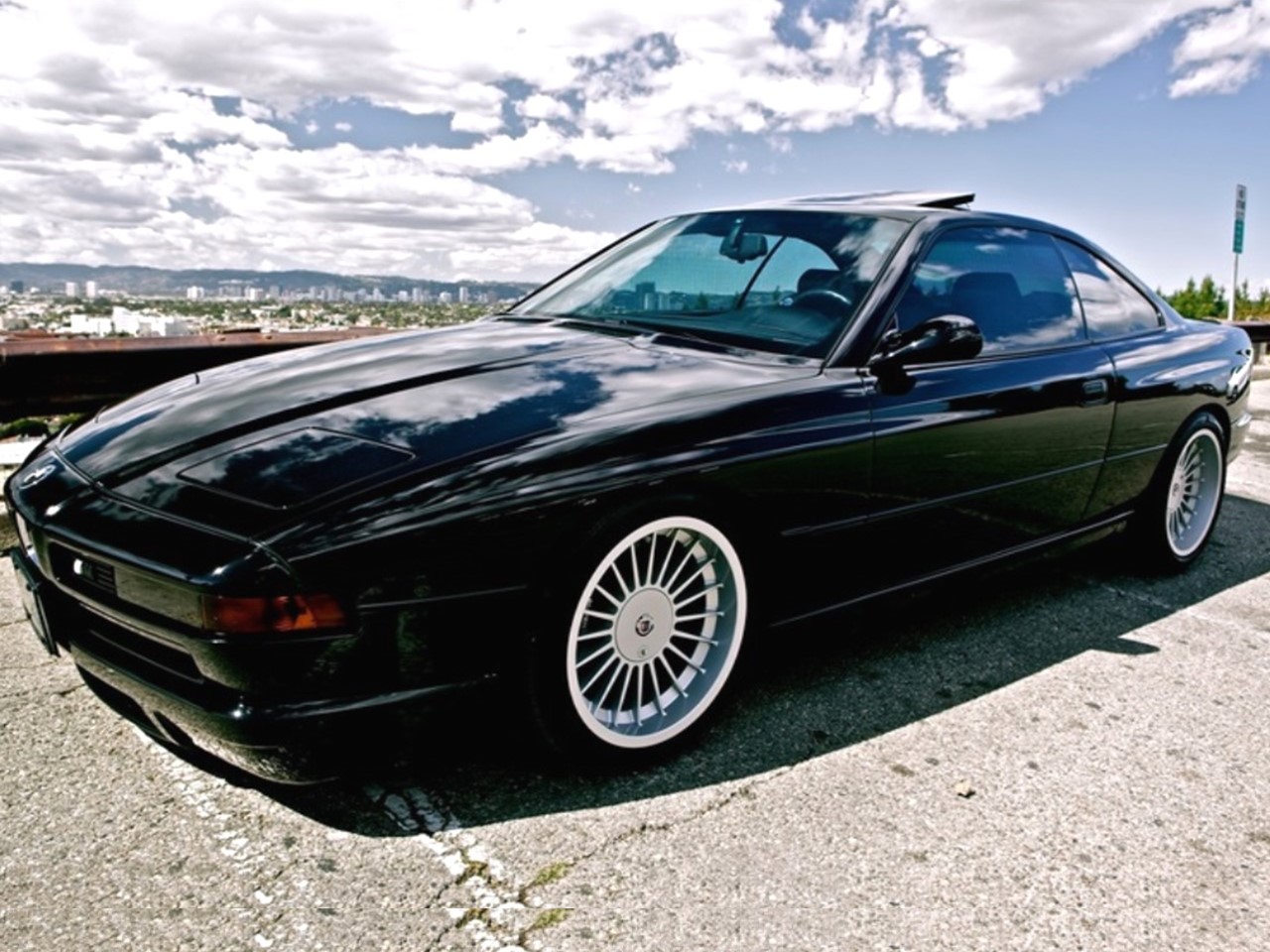 Both engines are mated to the 8-speed Steptronic Sport transmission. It is revised with reduced weight, a newly developed controller and a gear ratio spread that has been increased from 7.07 to 8.59. This yields significant efficiency gains with reduced engine speeds, especially when driving in higher gears. Manual gear selection is possible via steering wheel mounted paddle shifting.

The transmission features Launch Control for accelerating from a standing start with maximum power and traction. The transmission controller interfaces with the standard Professional Navigation system. It plans the route ahead preparing the car in advance for approaching situations calibrating it maximizing overall operational efficiency. Internet connectivity provides updates in real-time. 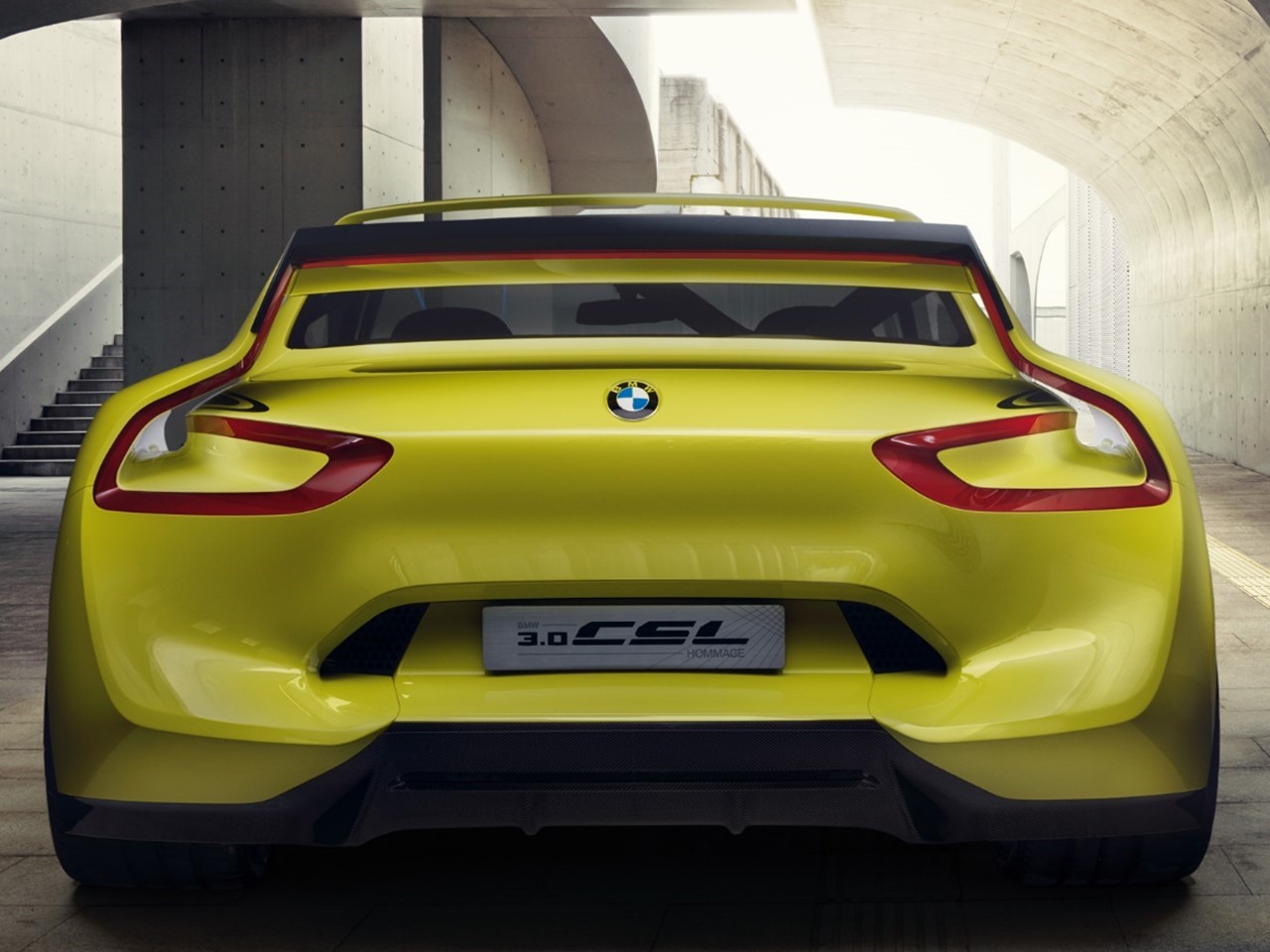 Engine and transmission are in sync adapting quickly to driver preferences affecting suspension dynamics. The BMW M850i xDrive is built with a stiffer bodyshell and lower center of gravity. Electronically controlled dampers maintain maximum wheel stability for all driving situations. The driver may select a docile, relaxed elegance…or Sport and Sport+ modes for increased dynamism with performance matched to engine sound. The electronically controlled dampers, Dynamic Stability Control (DSC), and four-wheeled drive system are coordinated to the driving mode selected either by the touch of a button or use of accelerator pedal.

BMW xDrive intelligent all-wheel-drive system networks the powertrain and chassis systems more efficiently than ever. All of the torque is directed to the rear wheels for driving situations where four-wheel drive isn’t required. The power split has an electronically controlled multi-plate clutch working in accordance with the driving demand as needed. It rapidly and precisely distributes torque between the front and rear wheels. This rear-biased system augments traction and handling stability in all driving situations. 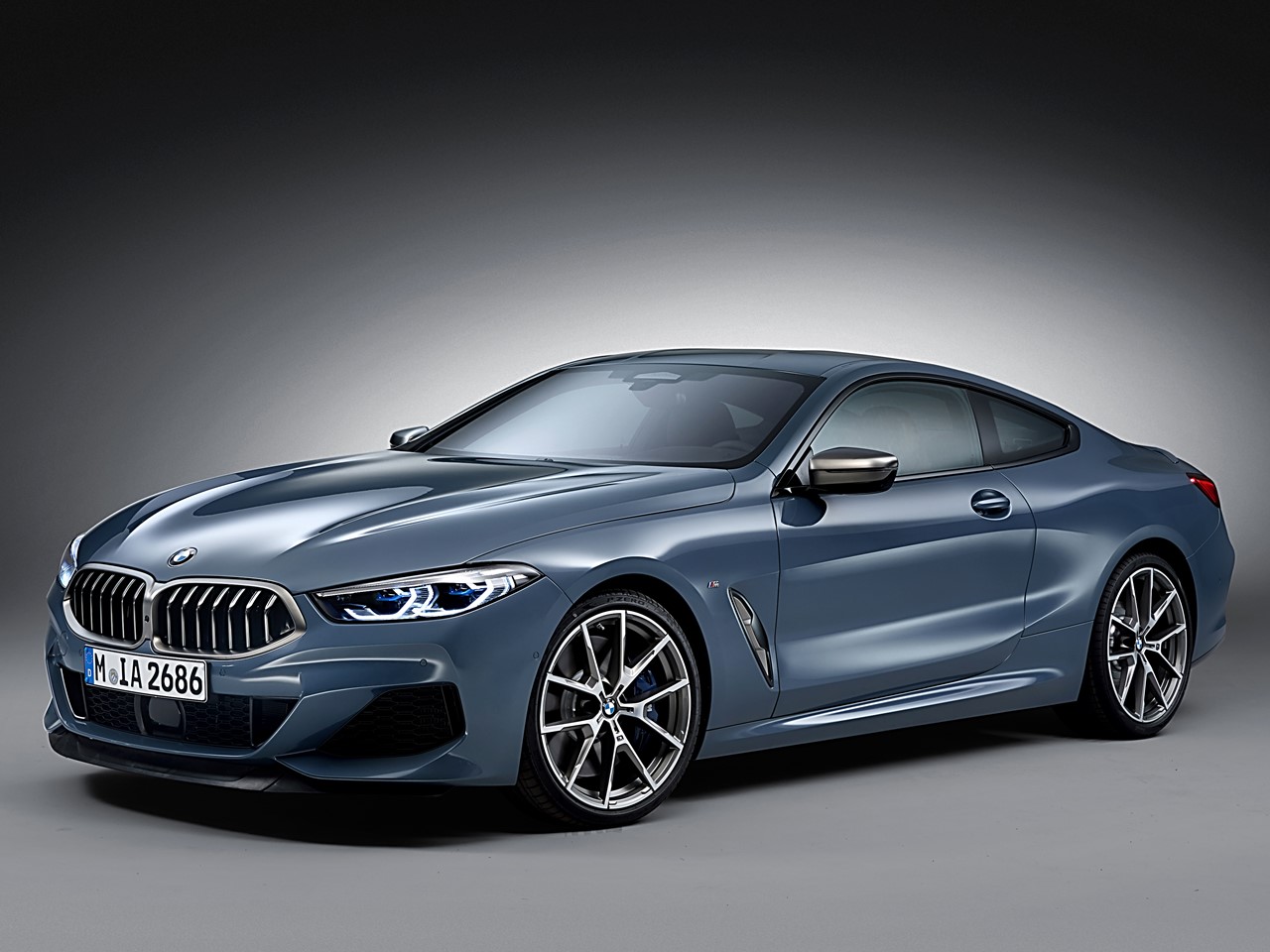 The new BMW 8-Series coupé is now in theatre at the BMW Dingolfing plant. Skilled craftsmen expert in their field of specialization handcraft each engine at the company’s main factory in Munich. BMW Group’s engine plant employs the latest technology incorporating new manufacturing logistics characterized by the highest degree of quality awareness. BMW Munich builds 6- and 8-cylinder engines for M-Powered models as well as 12-cylinder engines for the BMW 760Li xDrive, and Rolls-Royce models. 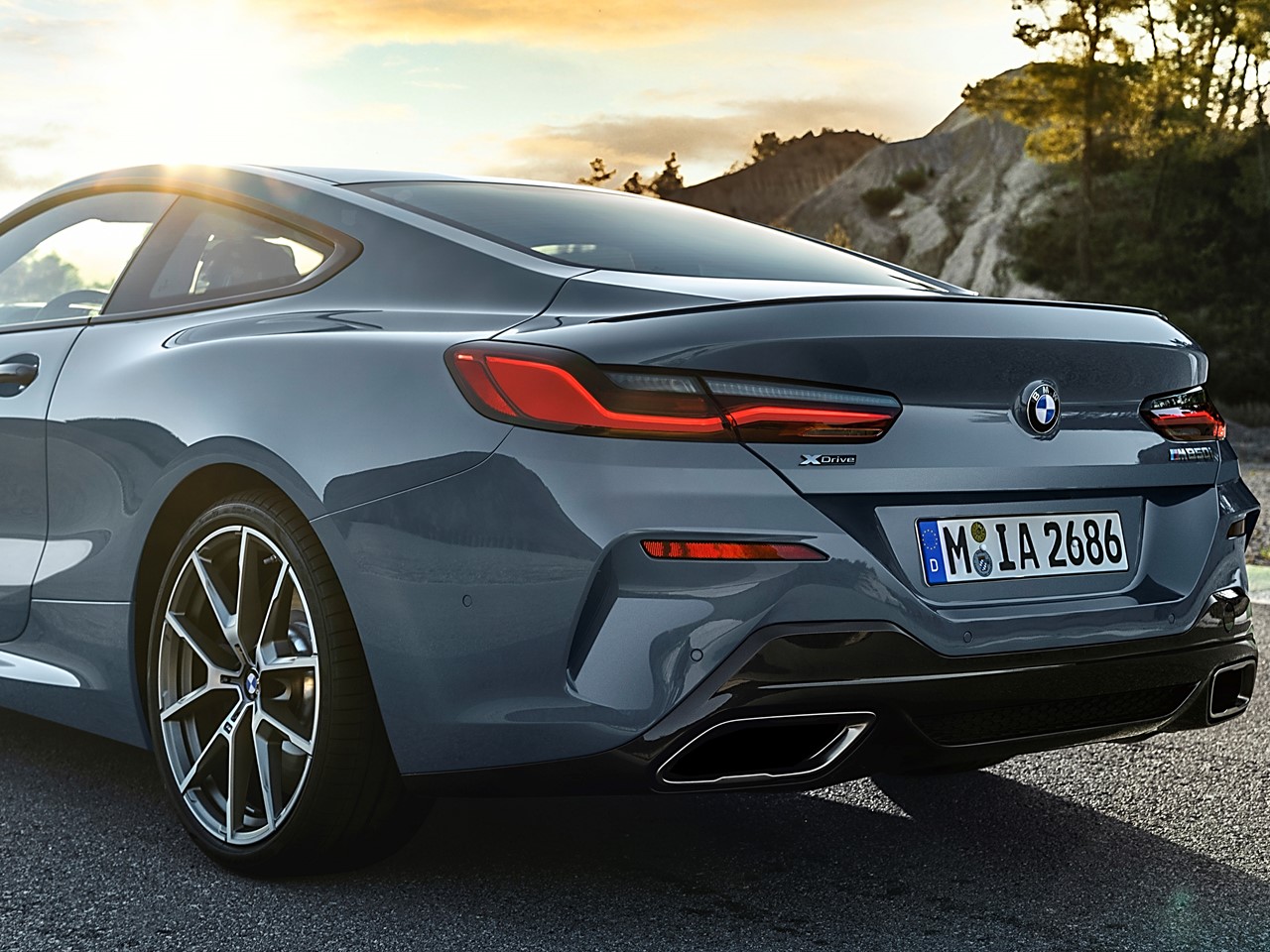 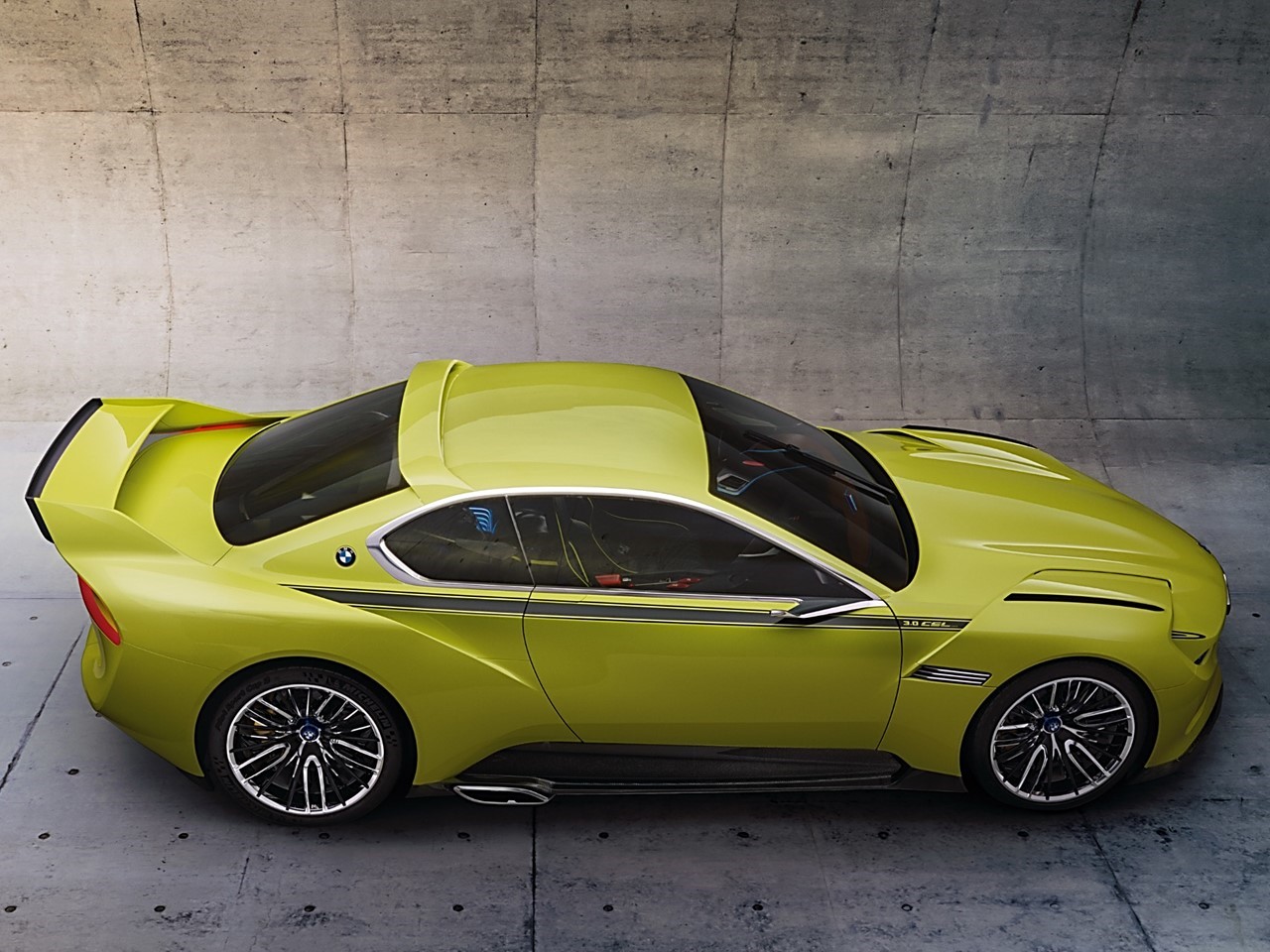 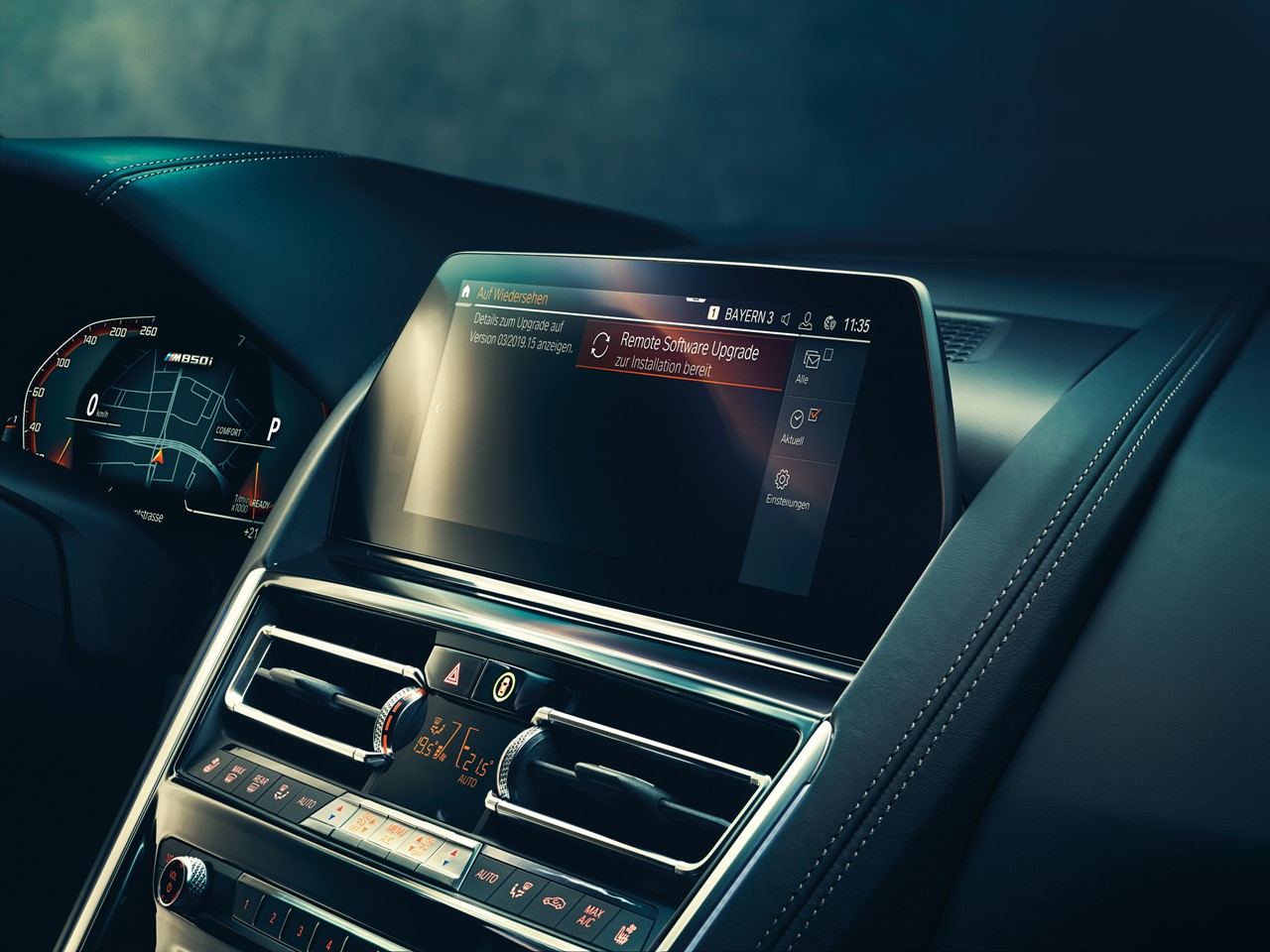 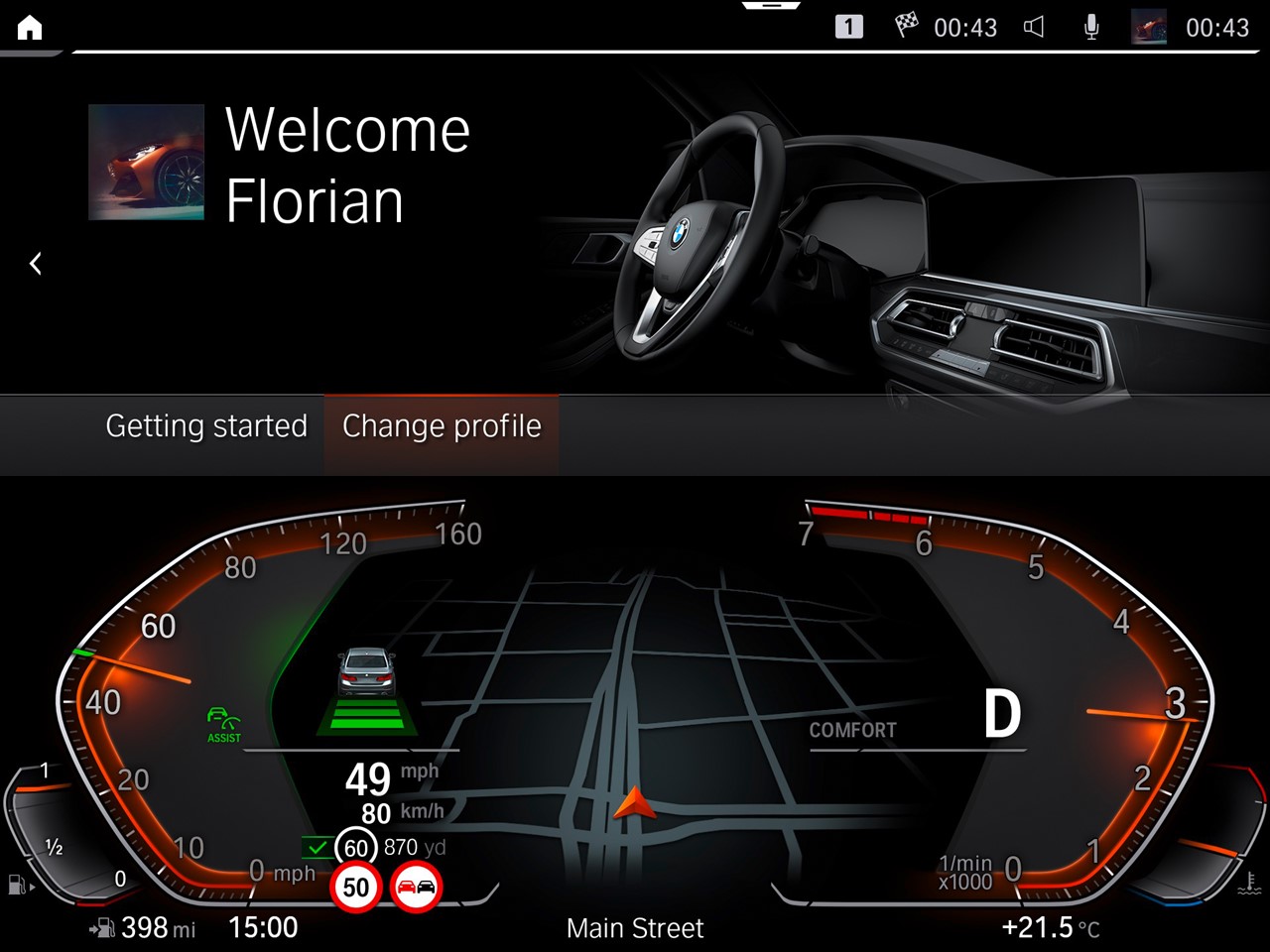 Sophistication to come includes the BMW Intelligent Personal Assistant ramping up to launch March 2019. “Hey BMW” is the intelligent digital character…a preface to an entirely new genre of voice activation replacing manual intervention. Drivers can operate their car’s functions and retrieve information merely by speaking to it.

The owner can name the assistant defining its personality. Additional technological mastery includes BMW Laserlight, Steering/Lane Control Assistant, and the ingenious Reversing Assistant which does all of the parking/reversing maneuvering in tight areas where visibility is limited. This is just a small portion of the autonomy that follows – shortly.

The driver assistance systems process camera images as well as data gathered by ultrasonic and radar sensors to monitor the vehicle’s surroundings, to warn of potential hazards and to minimize the risk of an accident with corrective braking or steering inputs. These integral features of the BMW Personal Co-Pilot represent the latest advances on the road to automated driving.

The M850i xDrive coupé is equipped with Cruise Control with braking function. For safety, Collision and Pedestrian Warning with City Braking, alerts the driver when a cyclist is detected. Depending on the situation, the system can bring the vehicle to a halt to either avoid a collision or minimize its consequences.

The next generation of electronic excellence is creating benchmarks in the industry. BMW Operating System 7.0 has fully digital instrumentation facilitating system operation and control adapting precisely to driver preferences. BMW Live Cockpit Professional is equipped with an adaptive navigation system and 20 GB hard drive-based multimedia system. The latest-generation display and control concept consists of a high-resolution instrument cluster behind the steering wheel with a screen diagonal of 12.3 inches and a 10.25-inch Control Display.

BMW Head-Up Display projects pertinent information onto the windscreen in the form of optimized graphics. BMW is expanding the scope of digital connectivity between people, vehicles, and services. (D-ACES: Design – Autonomous – Connected – Electrified – Services…you’ll be hearing more about this – as NotoriousLuxury delves into the new fully digital Operating System 7.0.)

BMW Connected is the digital and personal mobility assistant for BMW. Intelligent connectivity helps drivers reach their destination easily and with minimal stress, not only when they are in their car. BMW Connected is an all-embracing concept that is designed to seamlessly connect the driver and their smartphone with the vehicle.

The Open Mobility Cloud enables the personal mobility assistant to interface the car with the customer’s digital devices. These include iPhone and Apple Watch, smartphones and smartwatches running the Android operating system, as well as Alexa-compatible smart devices and Google Home. 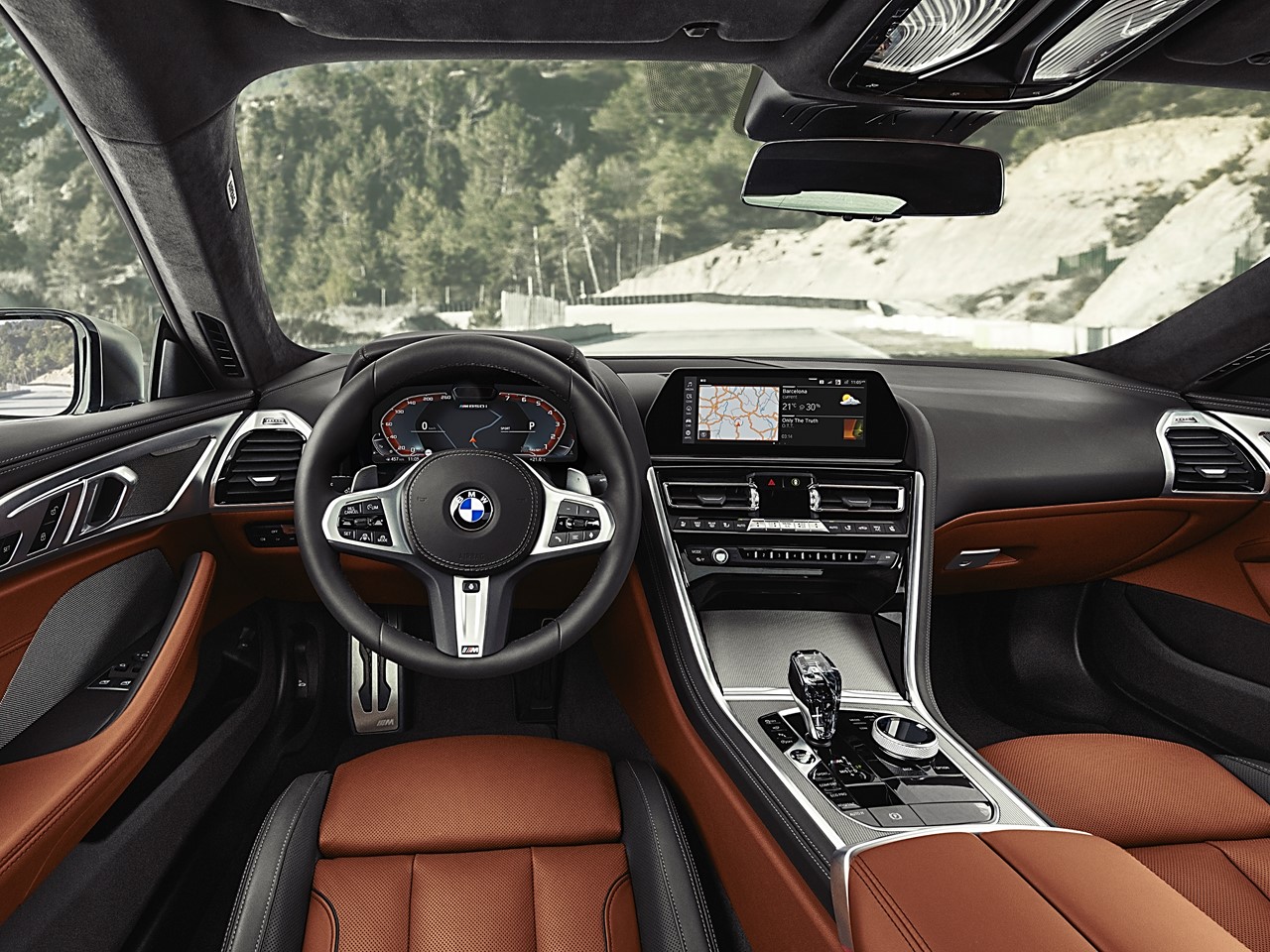 Inside the stunning architecture is a culmination of ergonomics, sporting elegance, and genuine BMW bravado. BMW active and passive safety is incorporated anonymously throughout the cabin. Extended Merino leather trimmed multi-functional sport seats have headrests integrated into the backrests providing lateral support. The body cradling power assisted front seats has a memory function for added comfort and convenience. 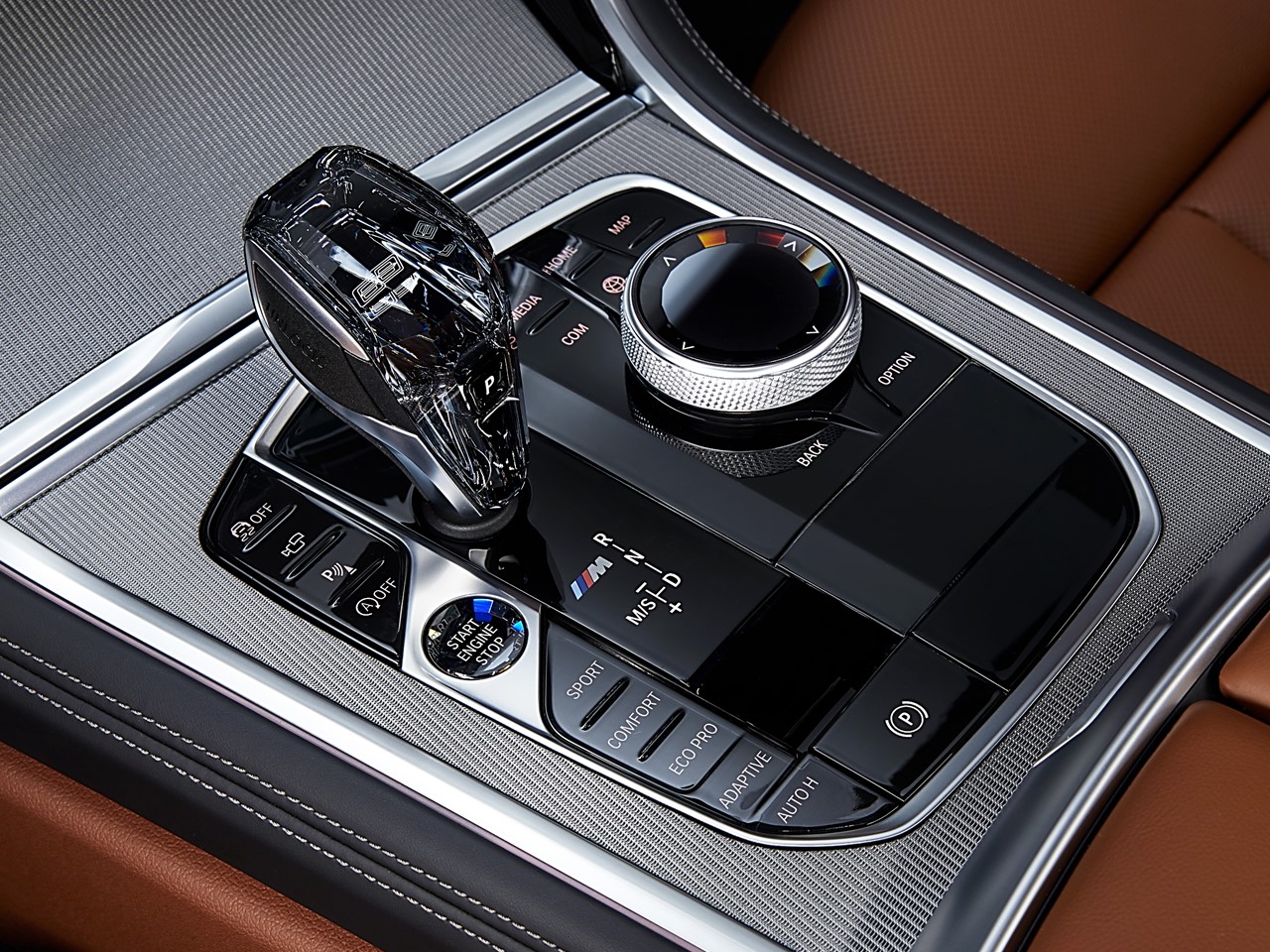 BMW Individual is the ultimate in bespoke personalization 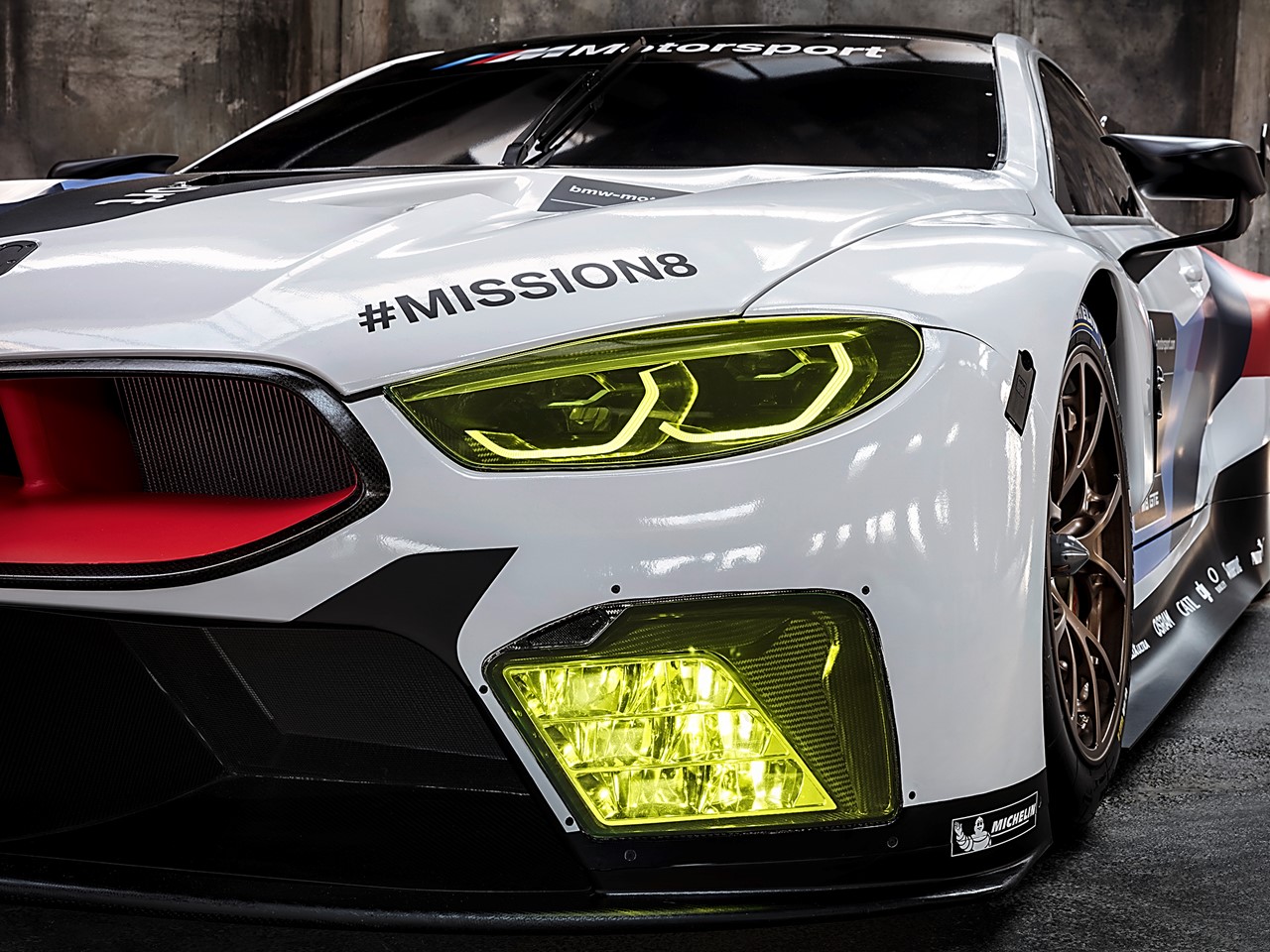 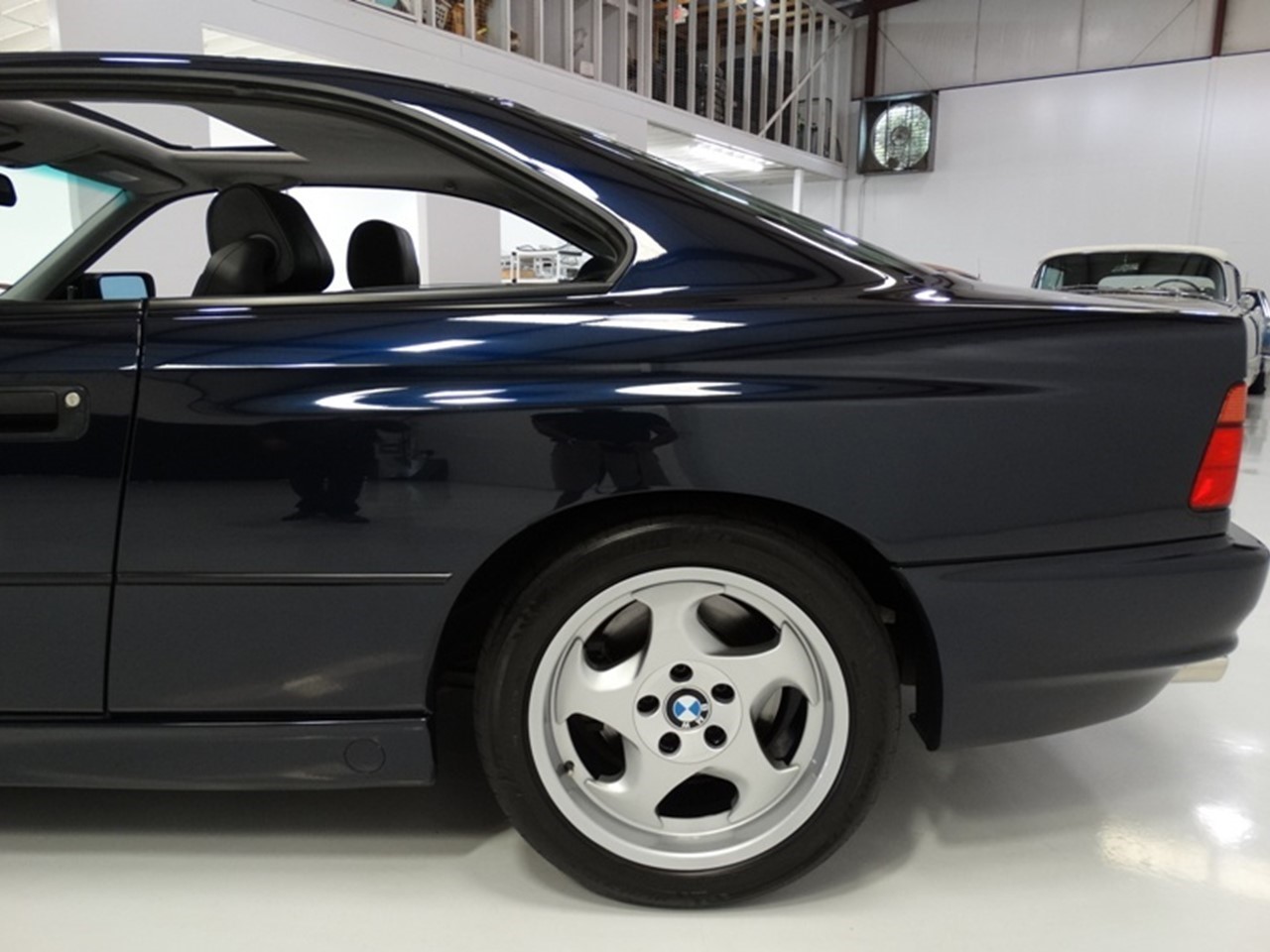 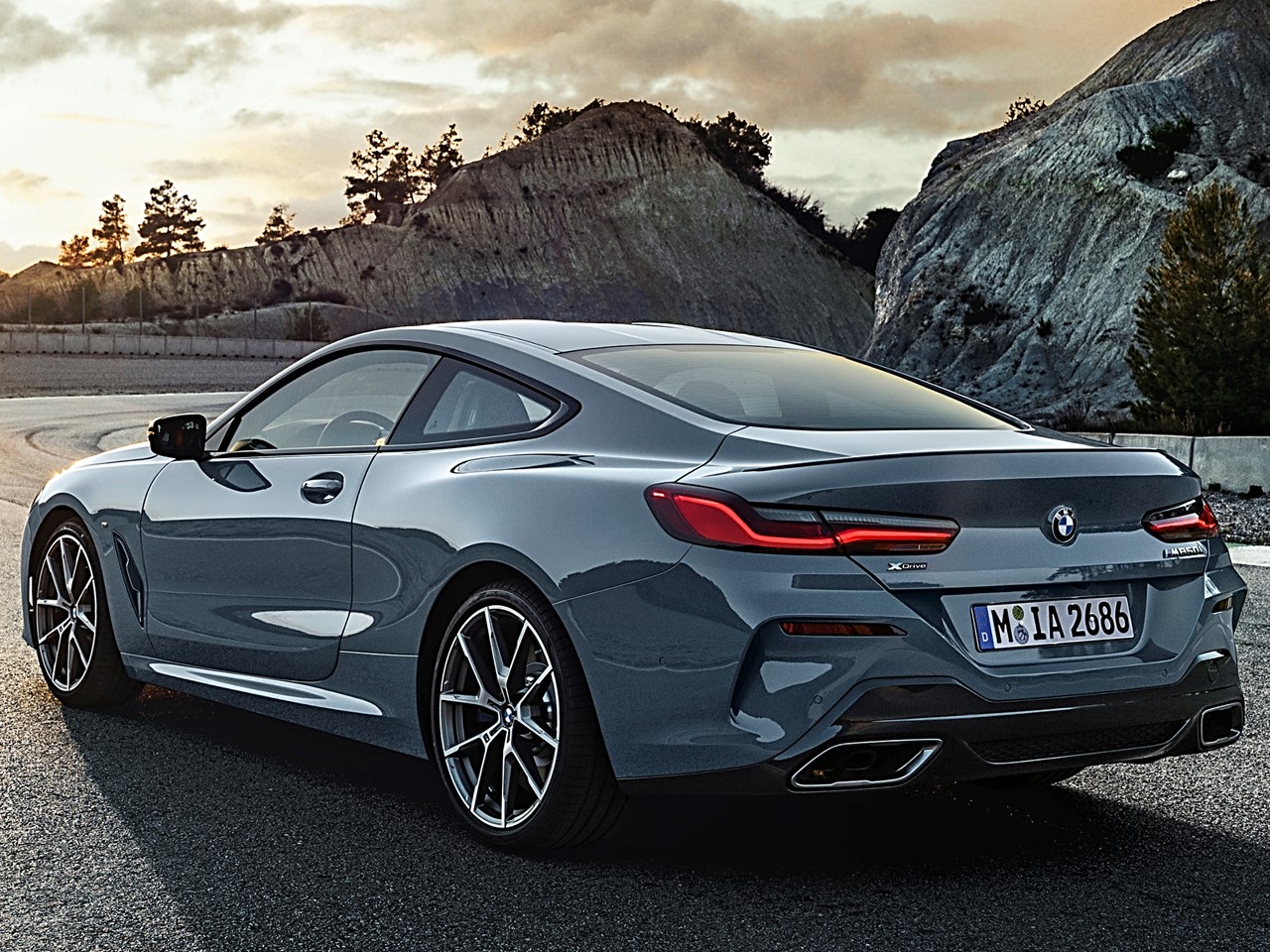 BMW EfficientDynamics expands intelligence beyond electronics. To dissect the new 8-Series existence reveals an impressive collage of rigid, lightweight componentry consisting of aluminium, carbon, magnesium alloys, as well as high-strength steel throughout its construction. The 8-Series is built with BMW EfficientLightweight design highly influenced by the M8 GTE.

BMW M850i xDrive is totally unique yet familiar BMW DNA is evident. The silhouette is lower with fluidity associated with an 8-Series. The roofline manages to capture the BMW signature ‘Hofmeister kink’ incorporating it into the architecture discreetly. Attractive frameless side windows are used for the first time in this type of architecture.  Roof, doors, bonnet, and firewall are made from aluminium. Carbon Fibre Reinforced Plastic (CFRP) made in-house is available for the roof, this is a first for a production series BMW. 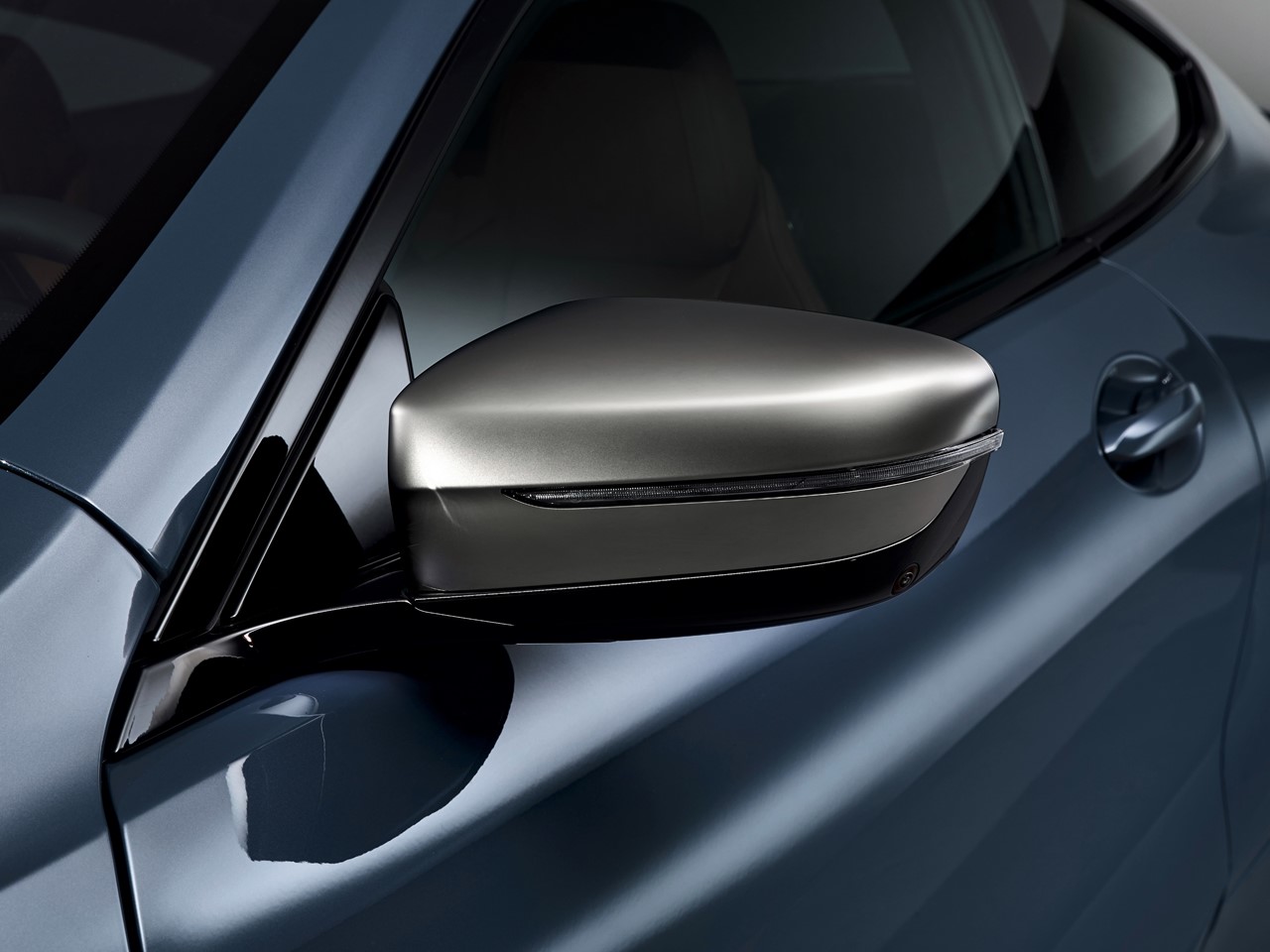 It comes as standard with LED headlights – the slimmest lamps of any BMW model to date. Both light tubes are used to generate the daytime driving lights as well as the low and high beam, thereby creating the signature brand look at all times. Rear tail lamps are also LED. Optional BMW Laserlight with variable road illumination and Selective Beam has a high beam range of around 600 metres. Blue accents inside the trademark twin headlights are the hint at its presence. 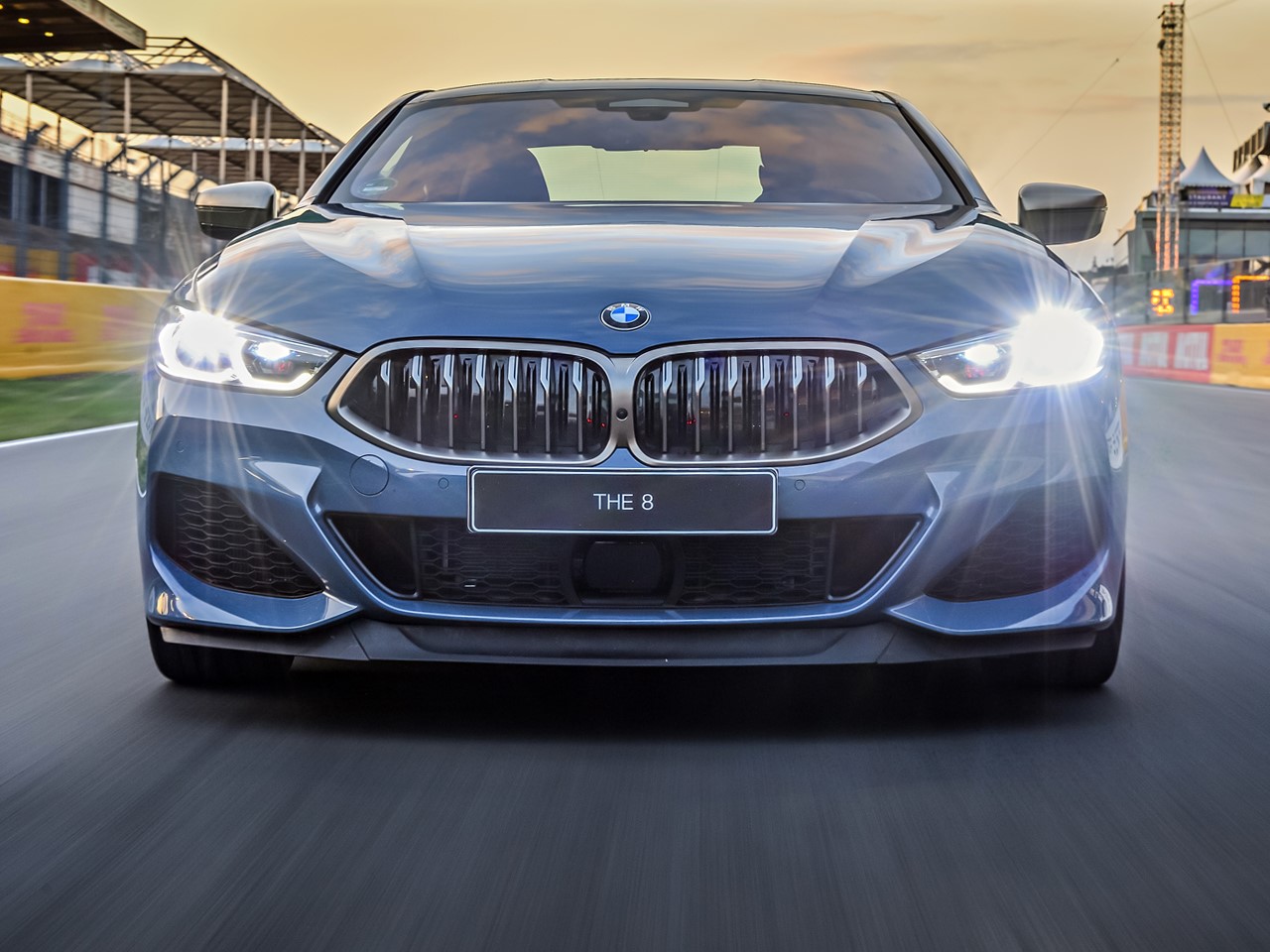 The latest manifestation of the iconic “8” eminence continues the corporate mission shaping the future of personal mobility. Artificial intelligence digitally interface vehicles with technology through the interconnectivity with other cars via satellite for information in real-time. BMW enters a new arena with the luxury sport 8-Series. The M850i xDrive represents the pinnacle in grand touring with obvious motorsport influence. 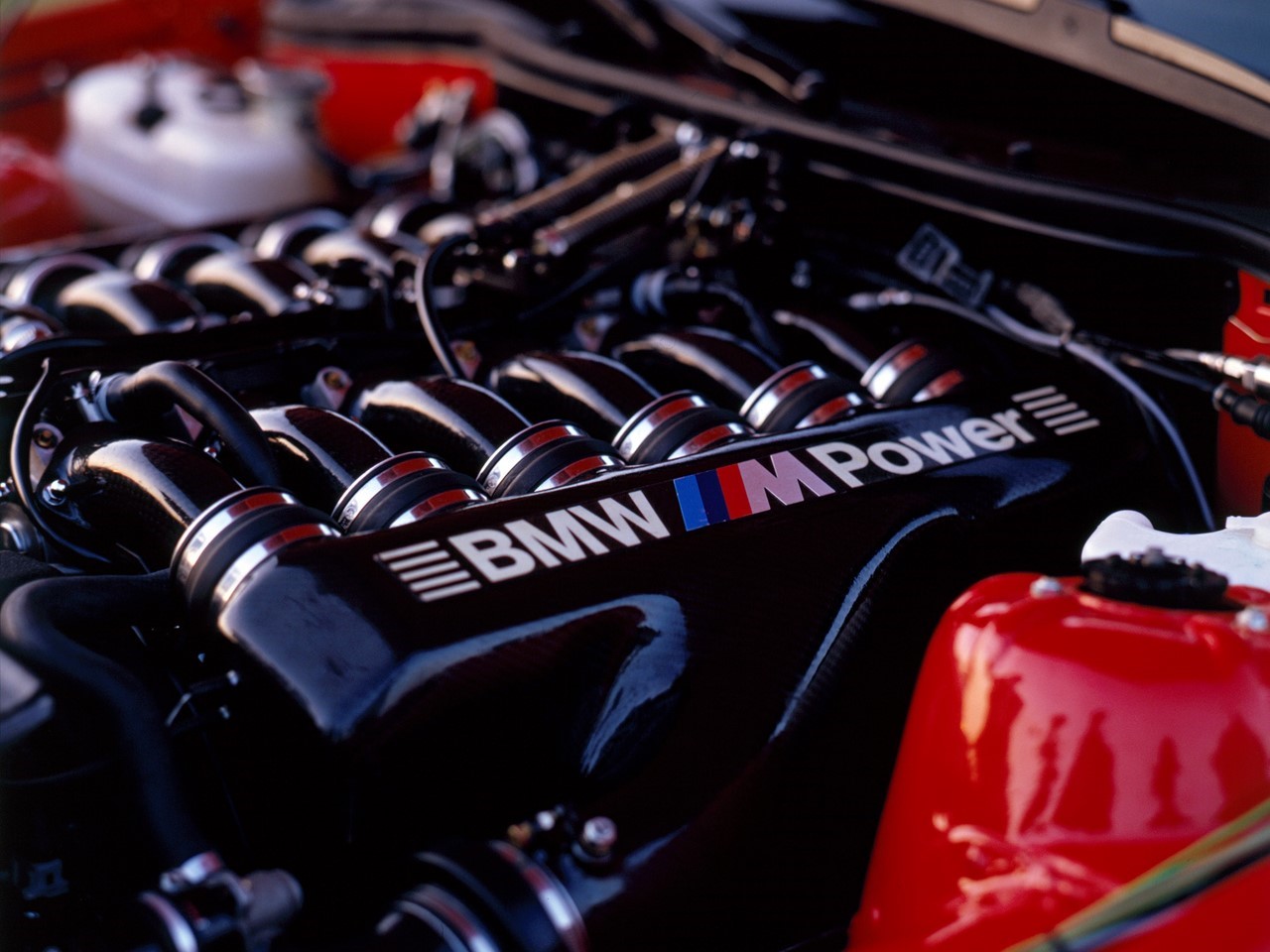 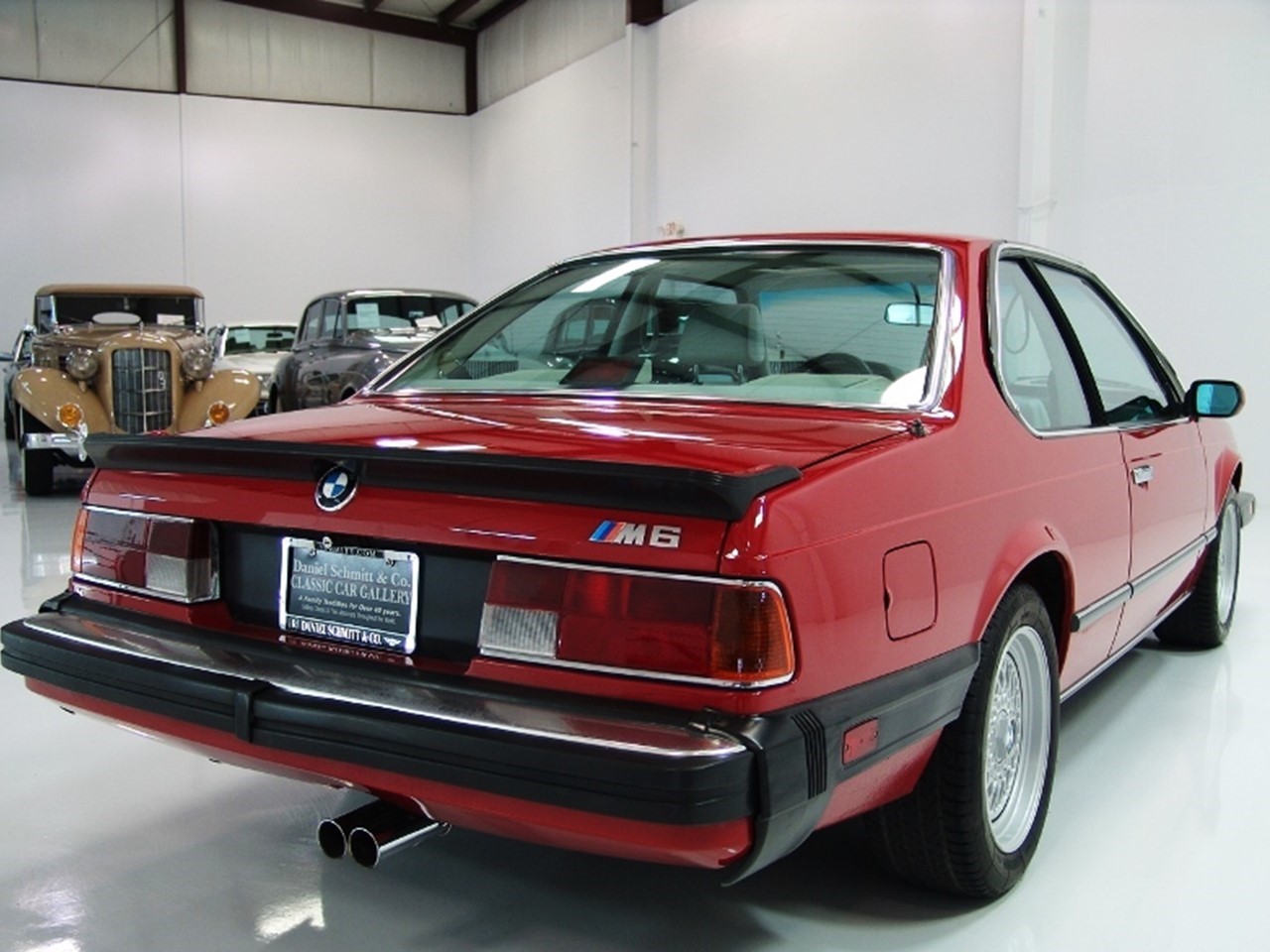 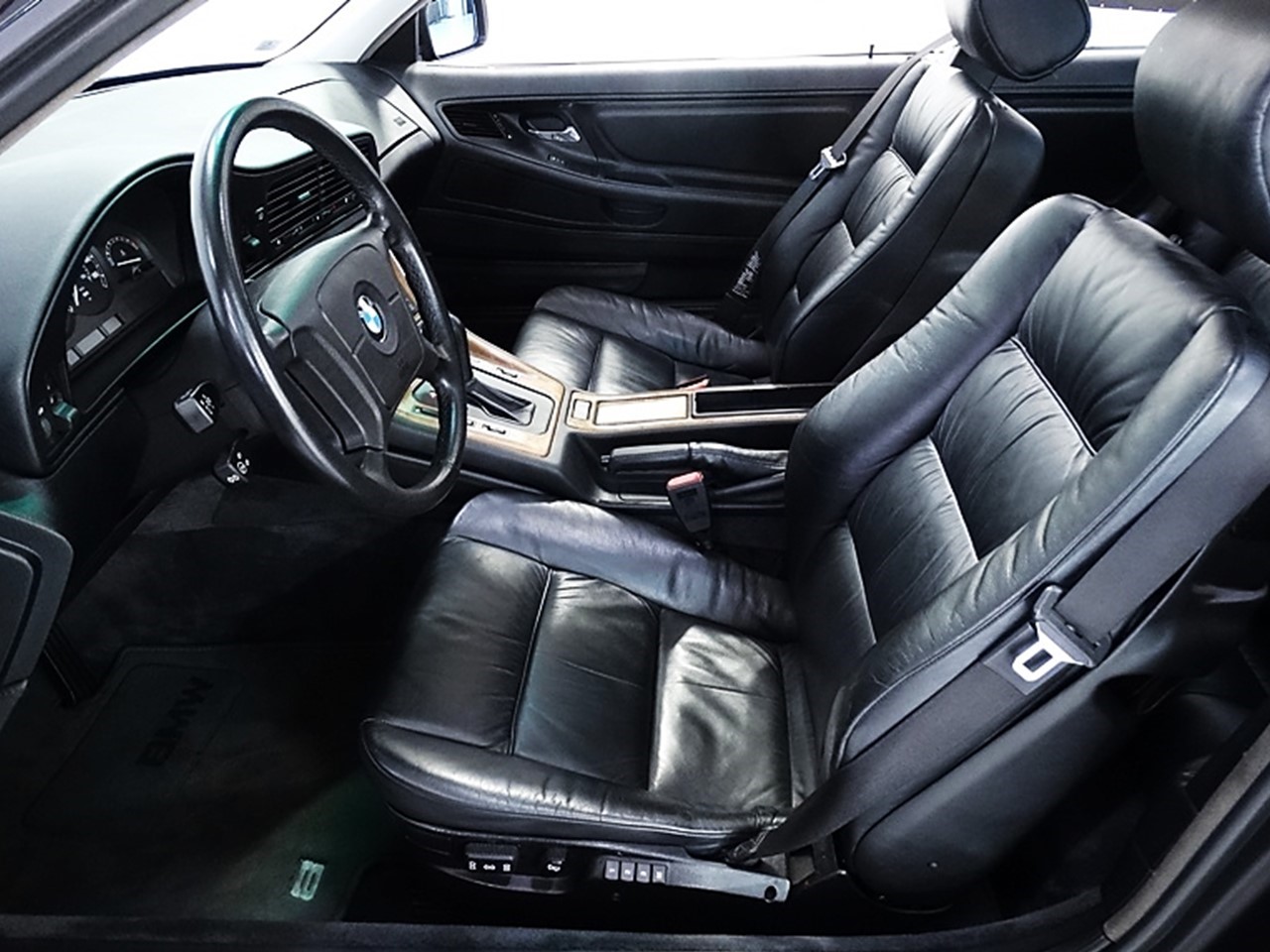 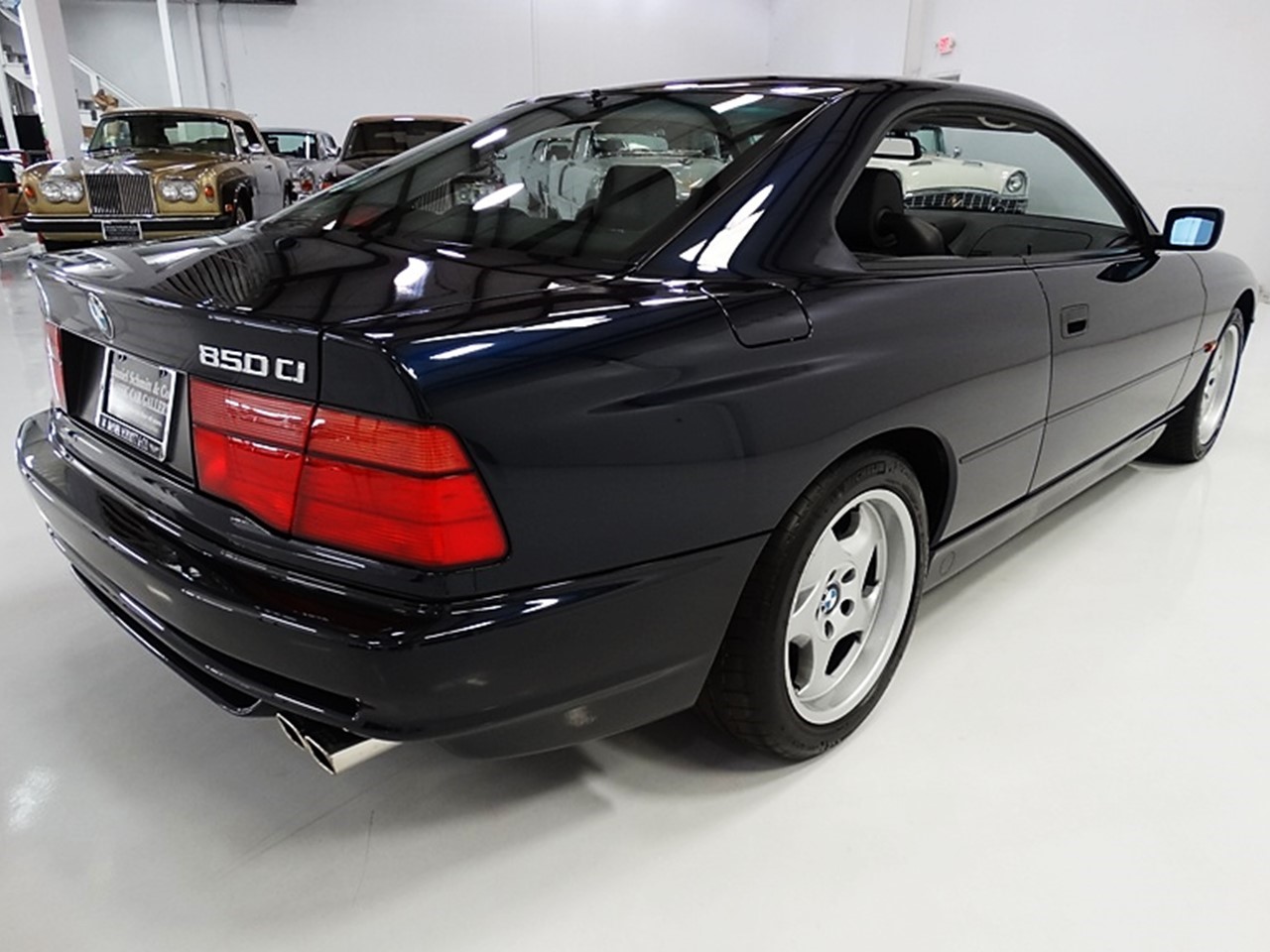 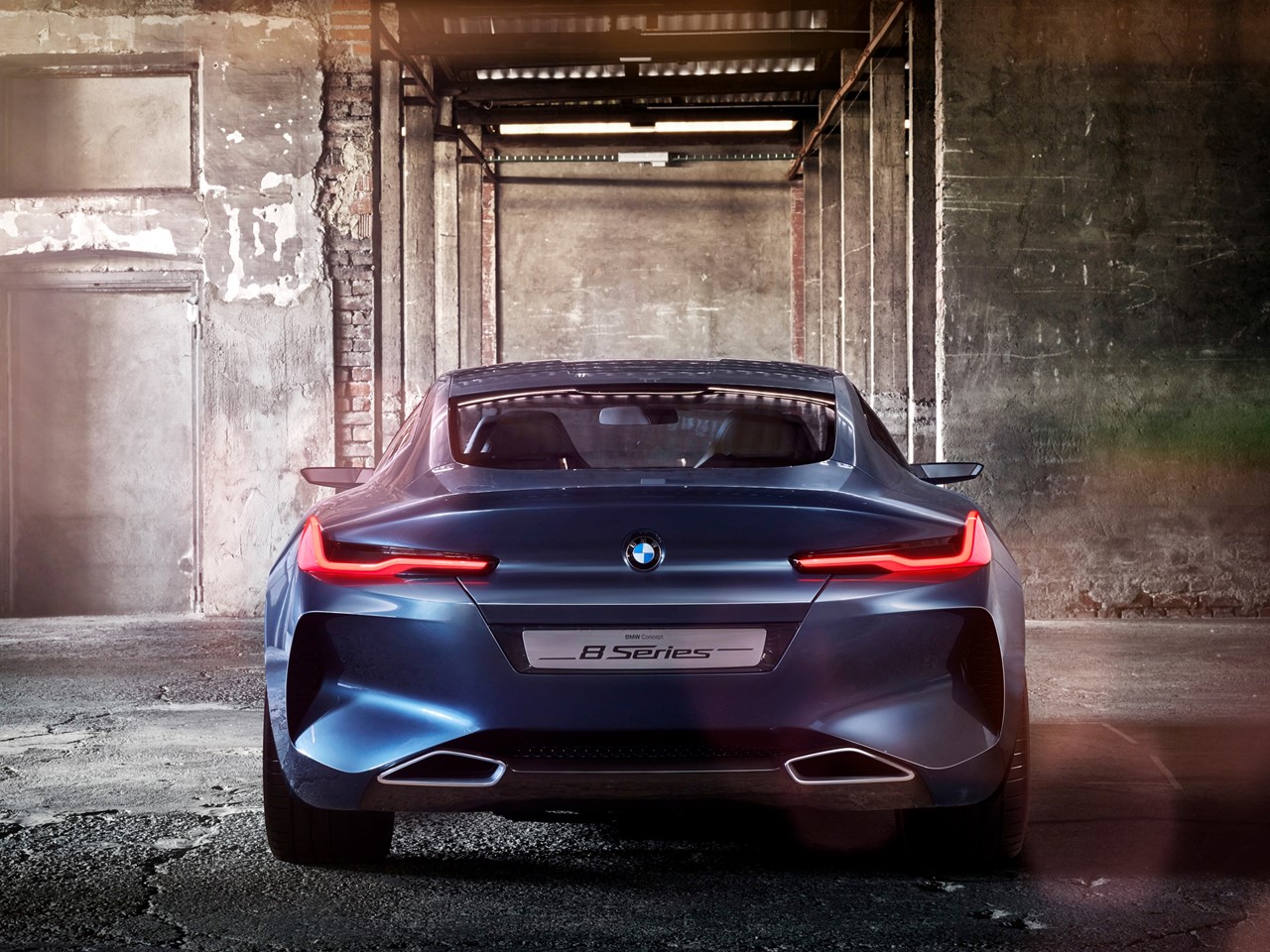 …it began as a dream 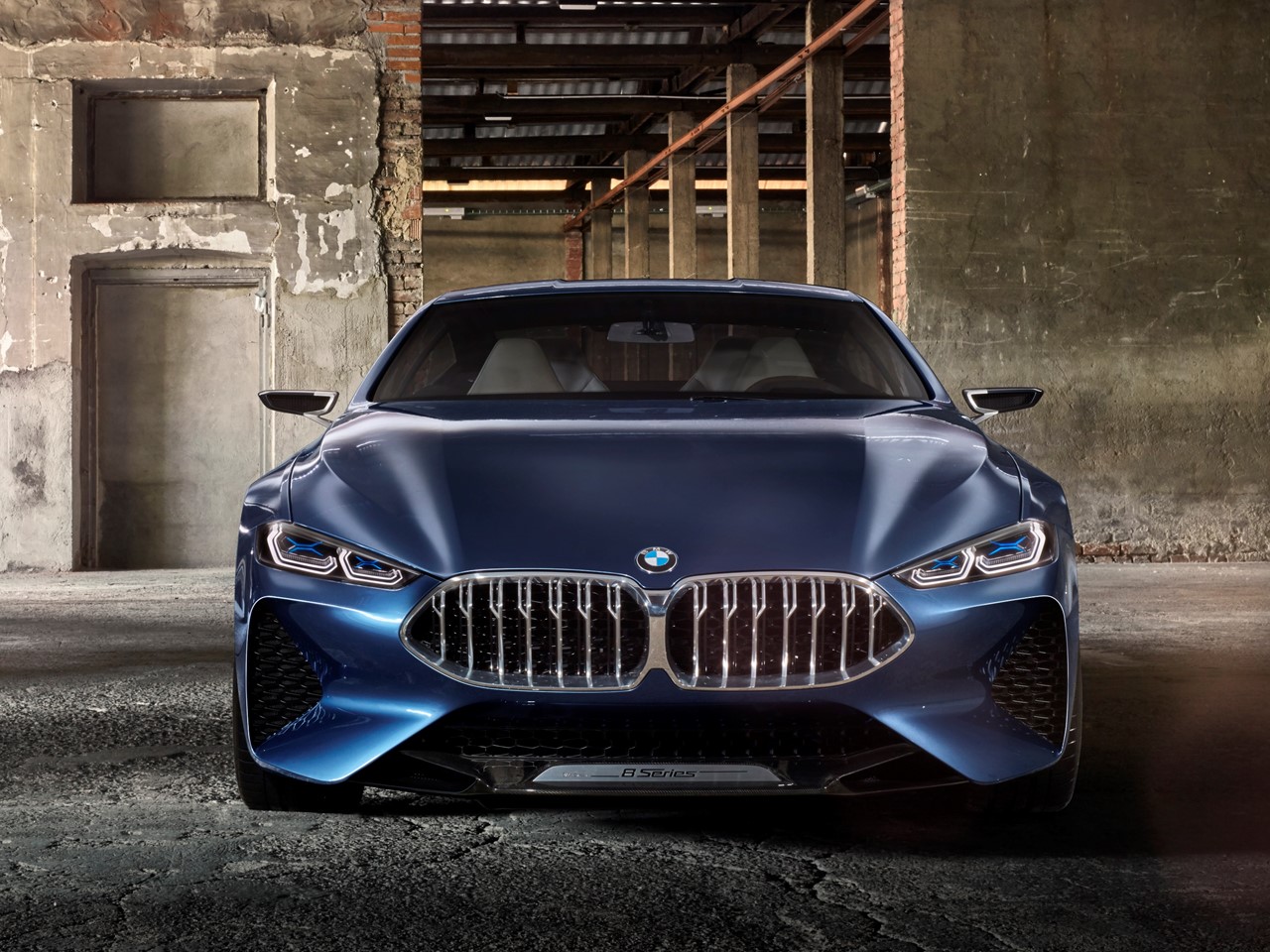