The 3.0 CSL dream coupé is the most successful touring car of its day. It was a pioneer when it came to innovation. In 1973 it received its power from BMW’s first 24-valve Inline 6-cylinder engine. In 1974 it featured a prototype anti-lock braking system. In 1975 nearing the end of 3.0 CSL production, a turbocharger was added boosting the maximum output to 800 hp. In 1976 a 3.2 litre Inline 6-cylinder with bi-turbocharging was added producing 750 hp.

A BMW is a finely tuned evolutionary machine. It is a precision automobile built by engineers and perfected in locations such as LeMans, Monte Carlo, and the grueling Nürburgring. Automotive high-performance is more than bulging hood scoops and colorful decals. Accuracy is prominent; agility and durability are not just matters of theoretical speculation.

BMW is committed to building automobiles with extraordinary deftness and stamina, remarkable handling, and of course efficient design. The BMW philosophy of exceptional performance is achieved through balance, not excess…more performance using less energy. At the heart of BMW is a rich motorsport heritage.

A special lightweight and extremely potent coupé was constructed on the E09 platform and bodied by Karmann from 1971 until 1975. The relentless BMW 3.0 CSL is extremely successful at racing. It helped to establish BMW’s status as a true driver’s car and laid the foundation for one of BMW’s most formidable racing divisions. As a fitting tribute BMW created the 2015 3.0 CSL Hommage Concept…it is truly the Class of 2015. 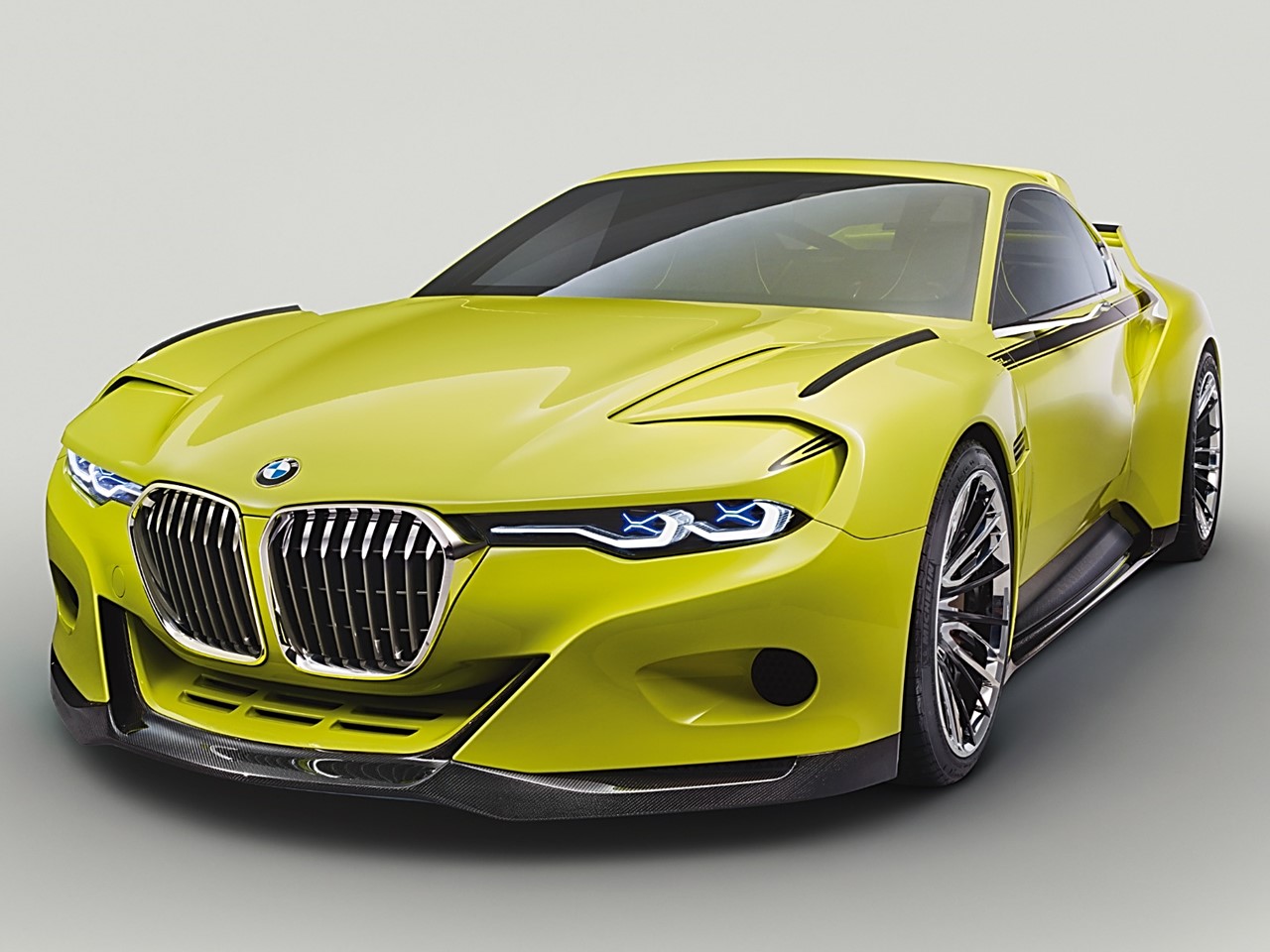 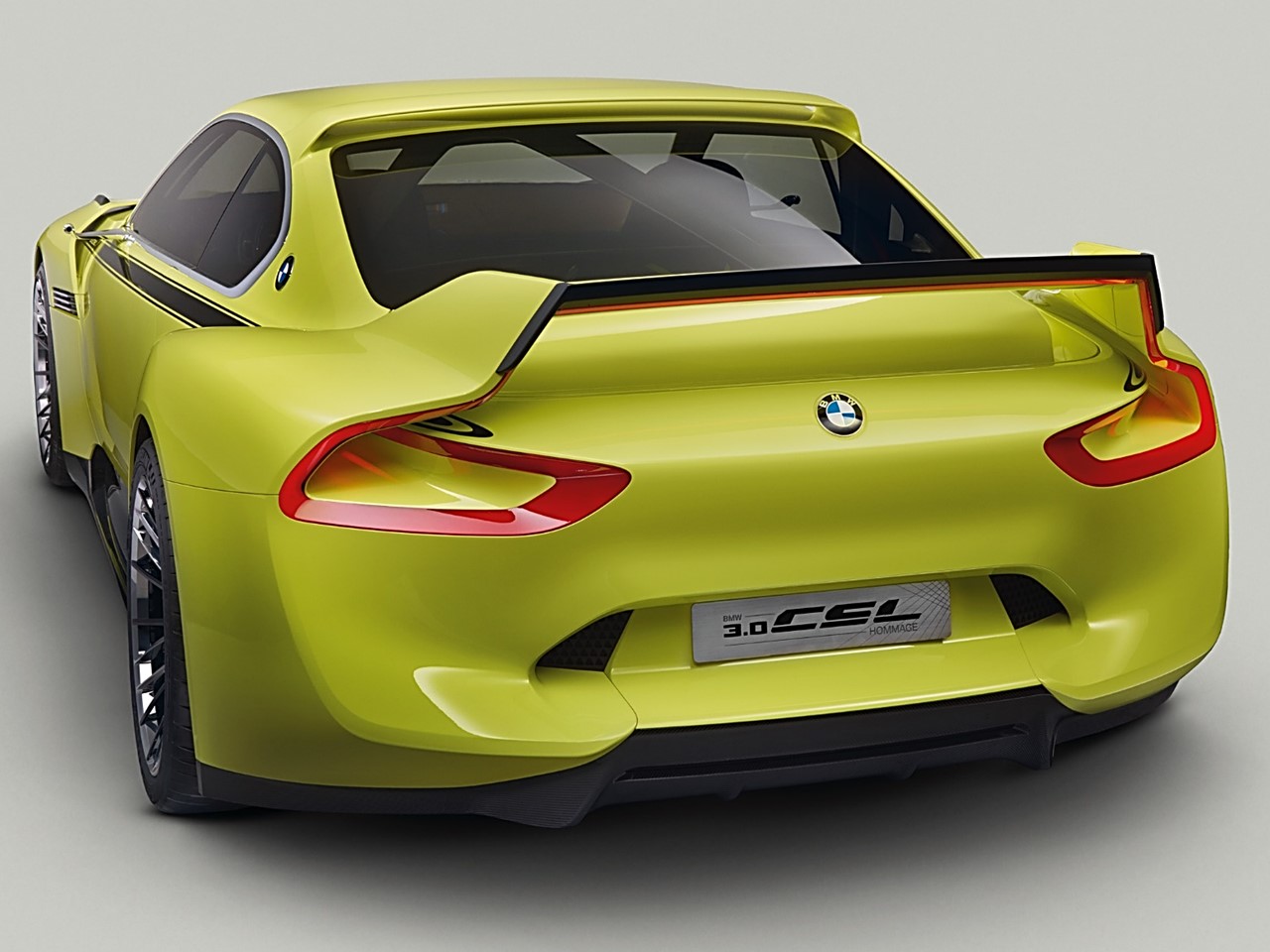 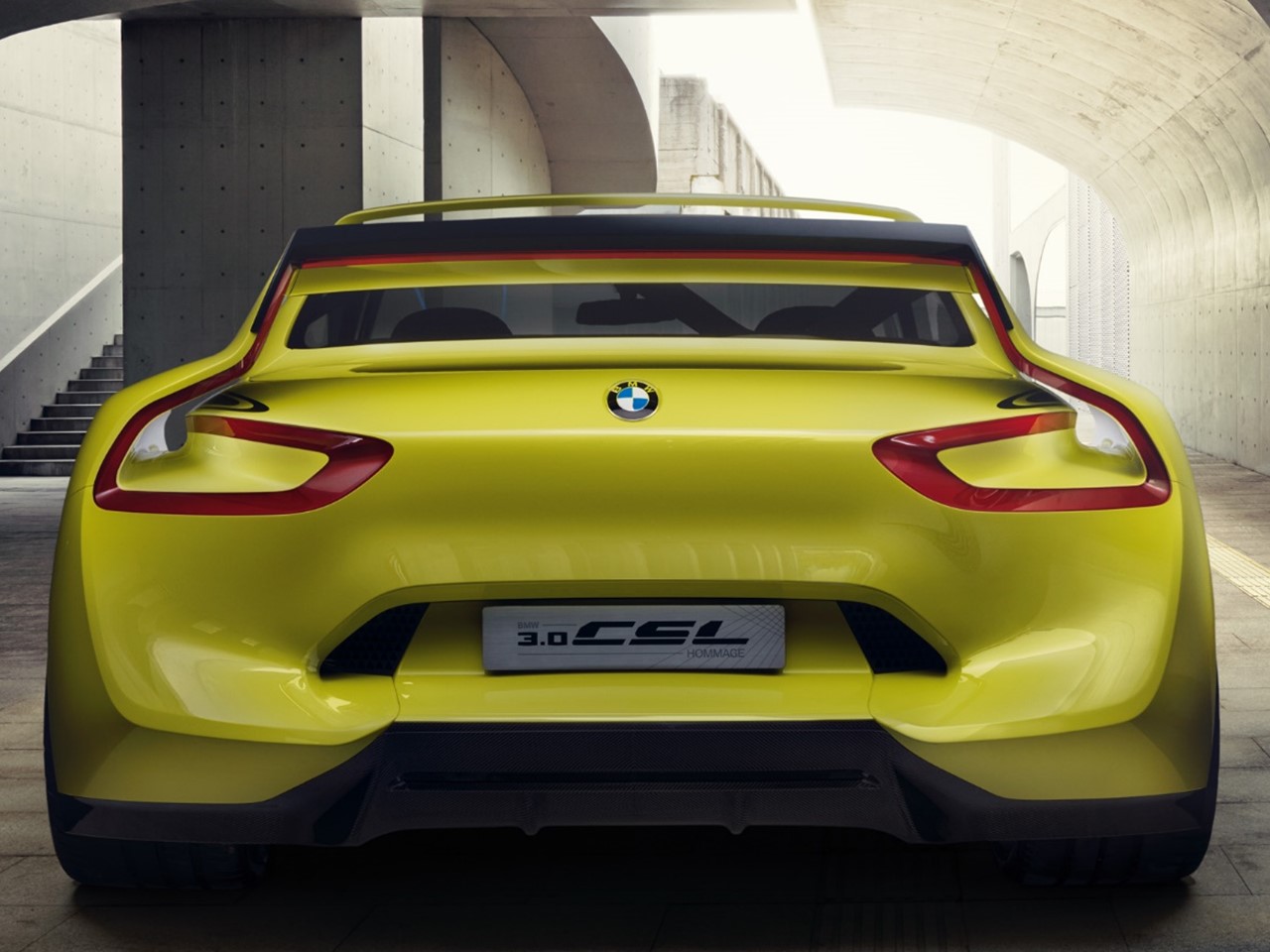 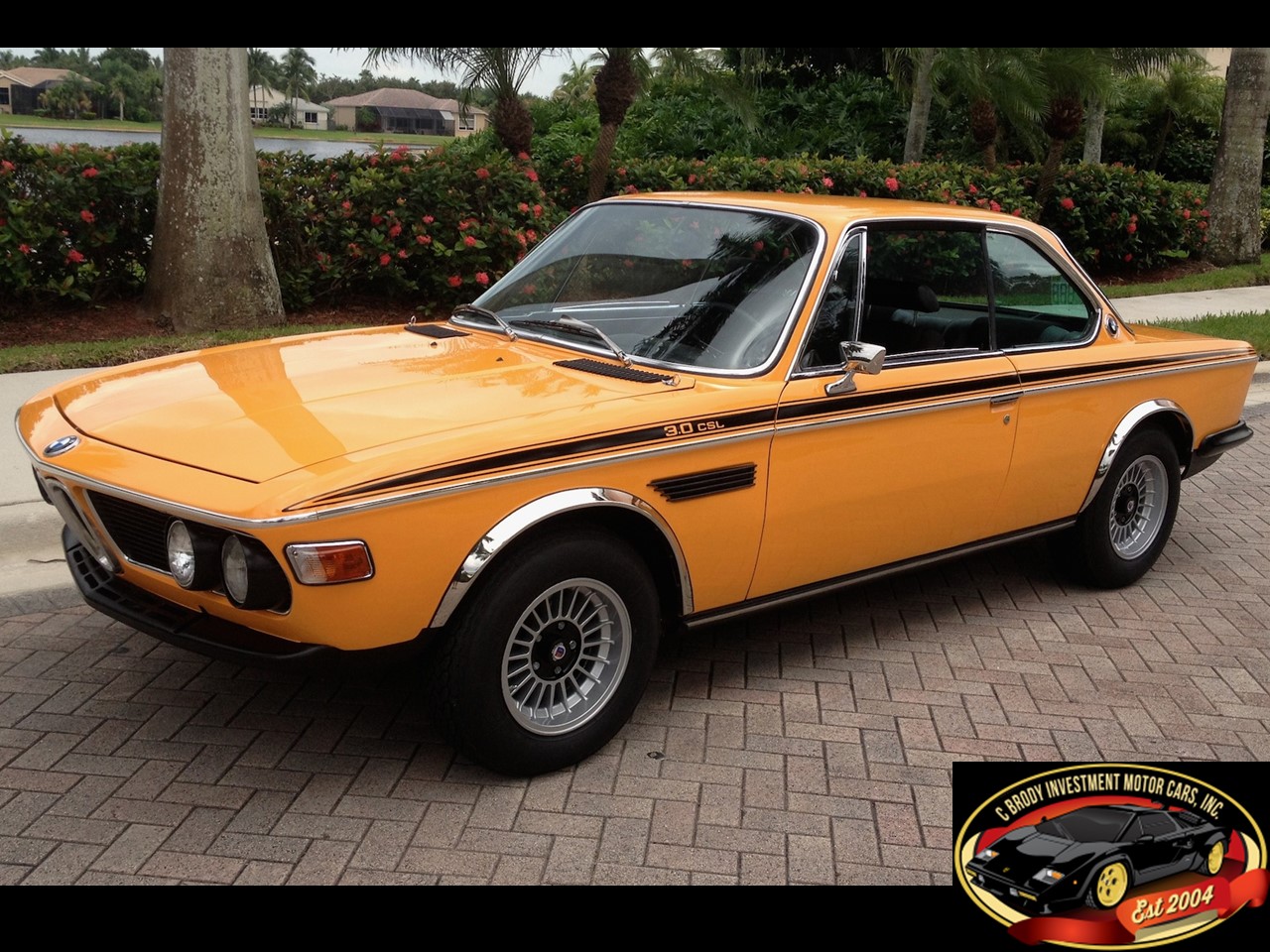 “CSL” equates to Coupé Sport Leichtbau or simply, lightweight sport coupé. It is pared down to the bare essentials to save weight. The original BMW 3.0 CSL was launched at the 1971 Geneva International Motor Show. It was originally intended to be a homologation model for the German Touring Car Championship expedited by a separate division within BMW AG which would later become BMW Motorsport GmbH, incorporated in 1972. The division was later renamed BMW M GmbH. The unique tri-color stripes that form the iconic “M” came into being on the classic 3.0 CSL coupé. Arrogance…but not conceit, as a touring coupé it is complete – This is the aggressive BMW “M-Powerment!” 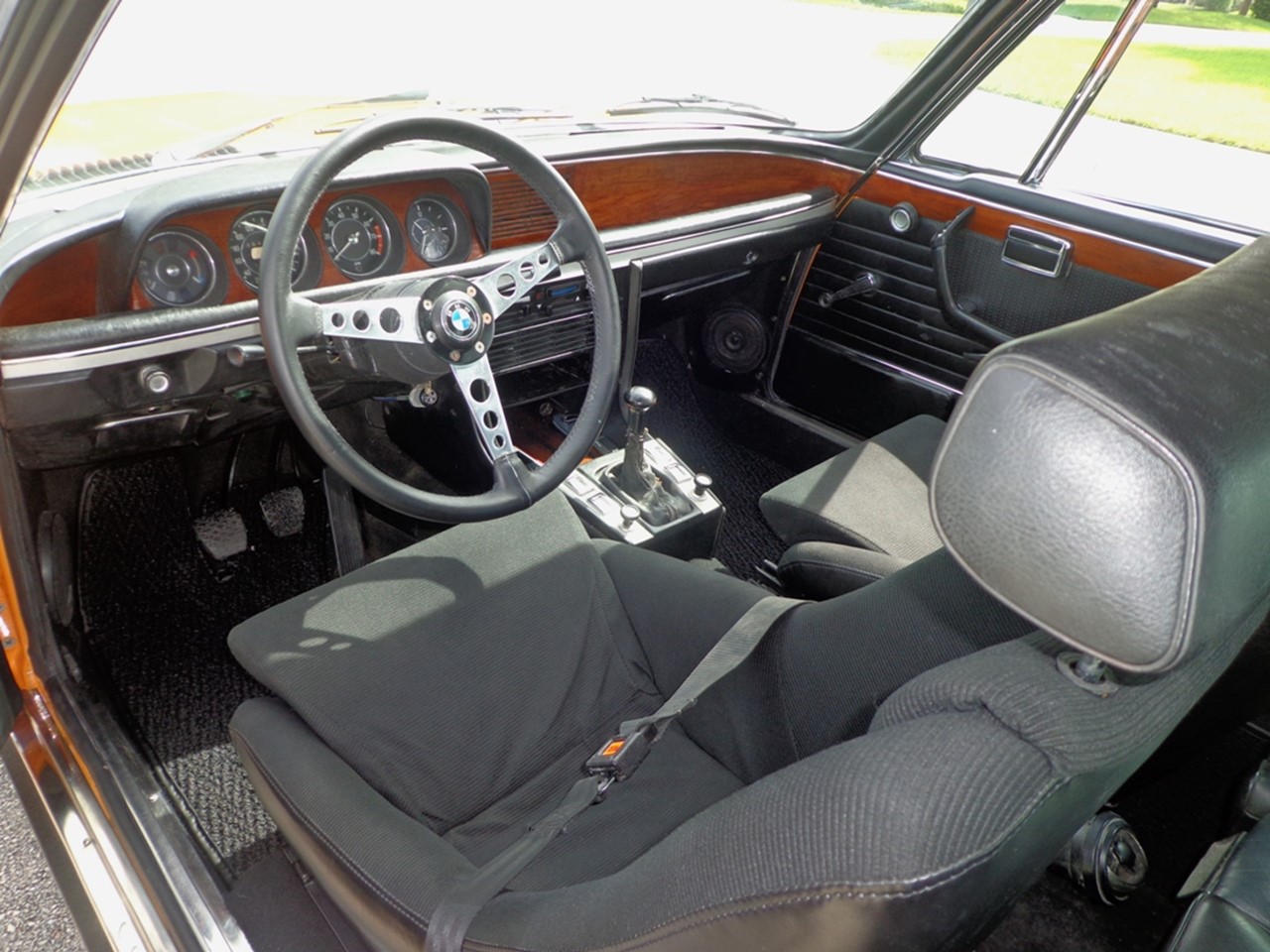 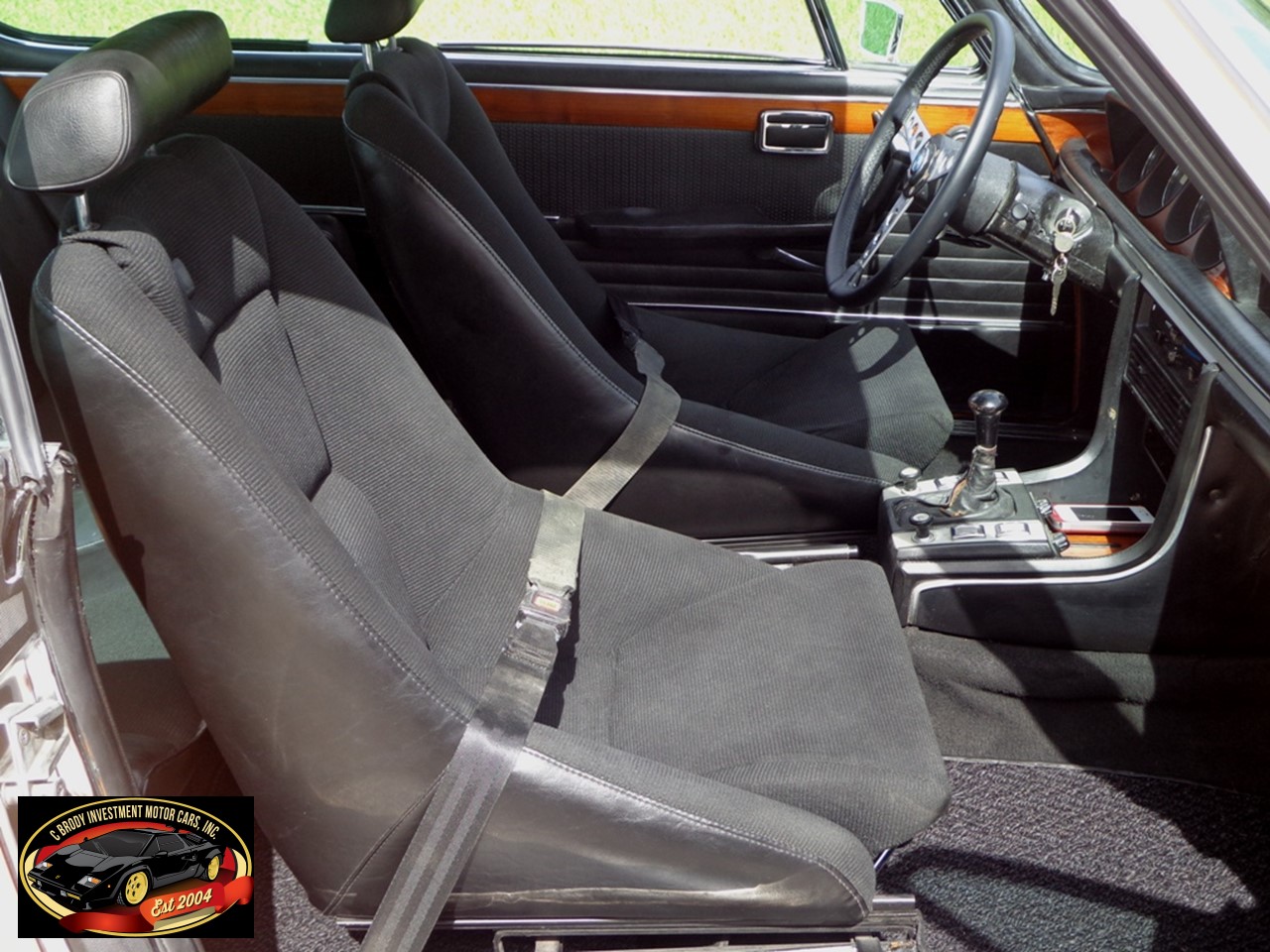 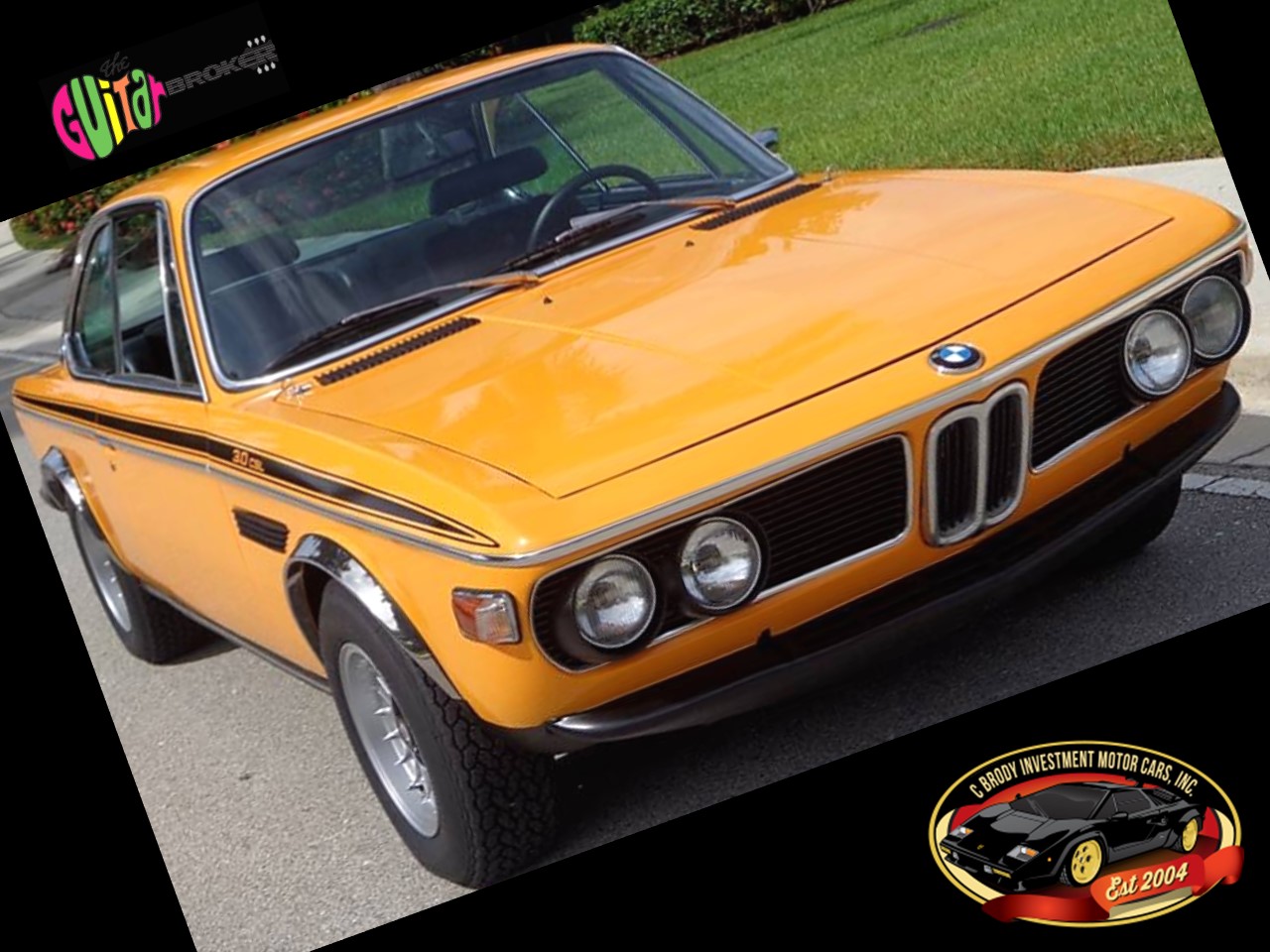 To Craig Brody: “This one’s for you…kid” 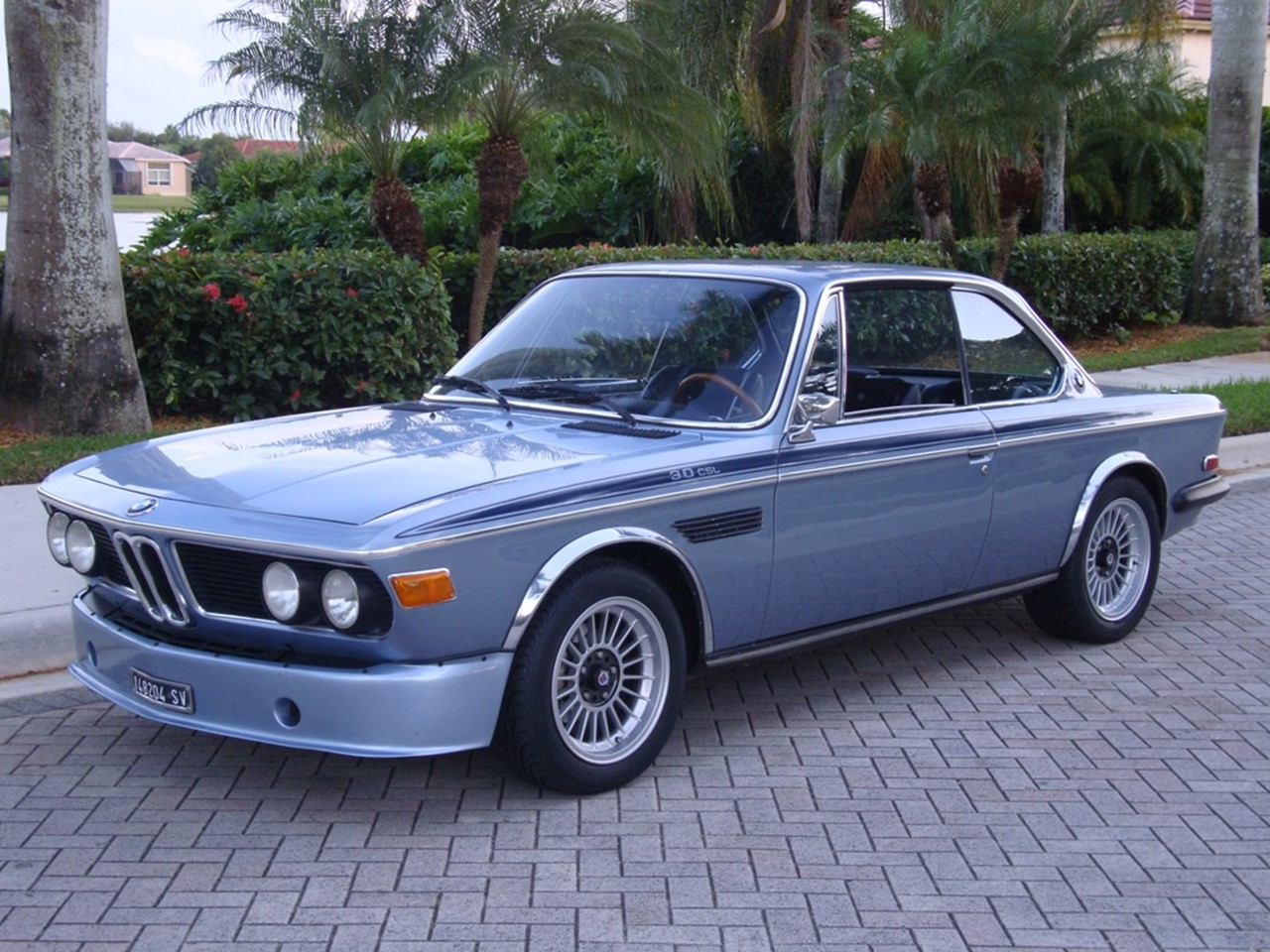 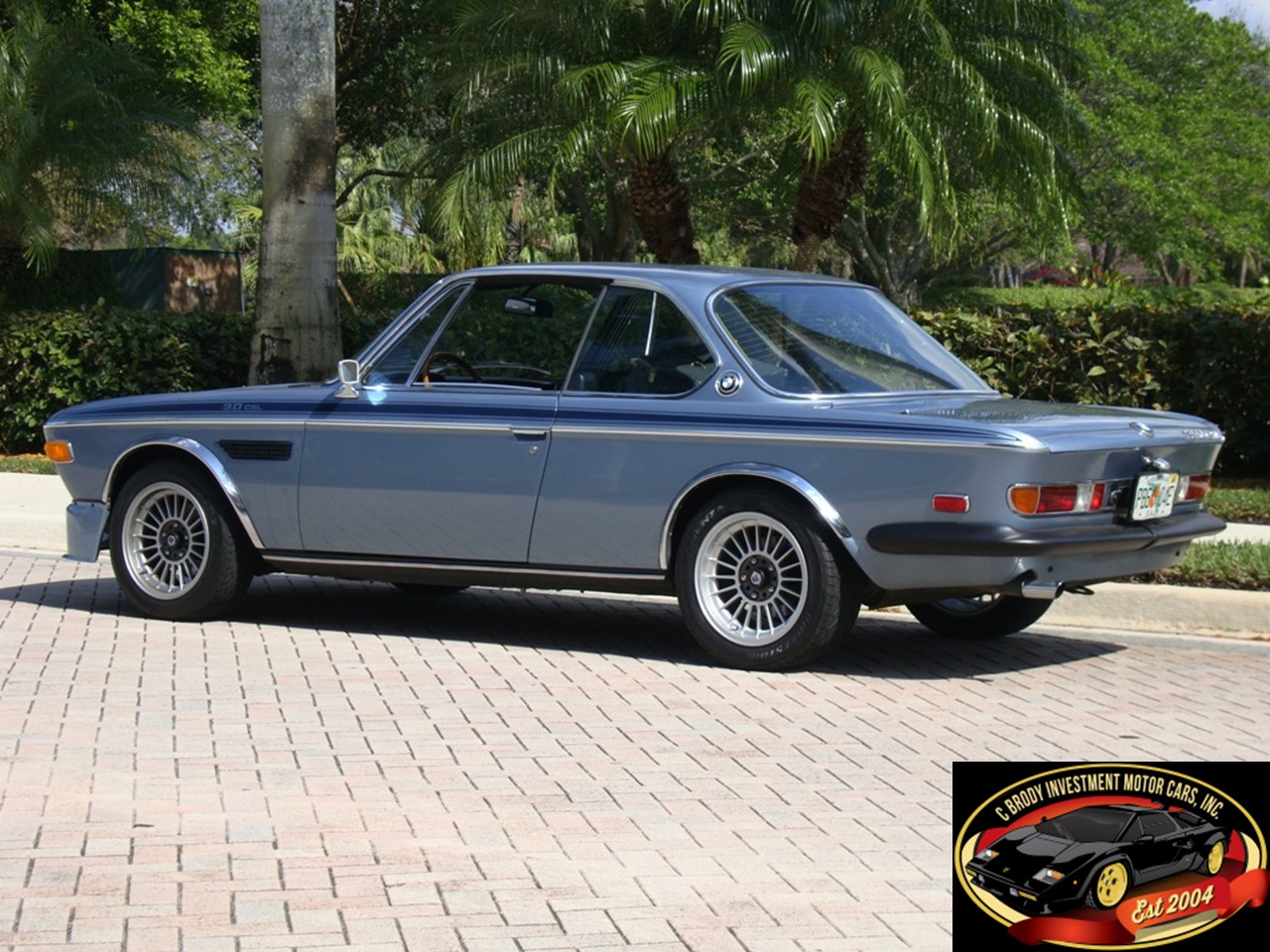 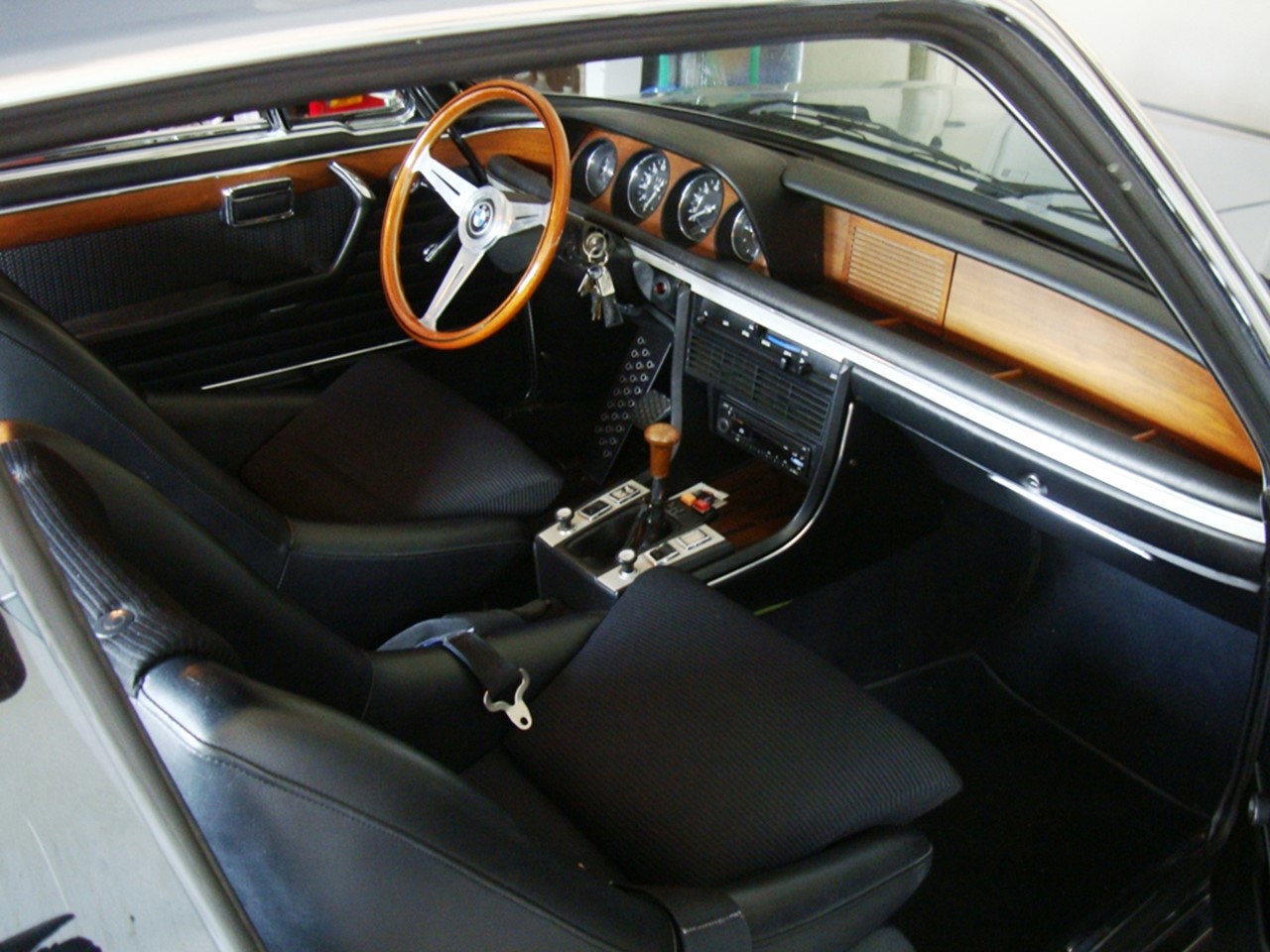 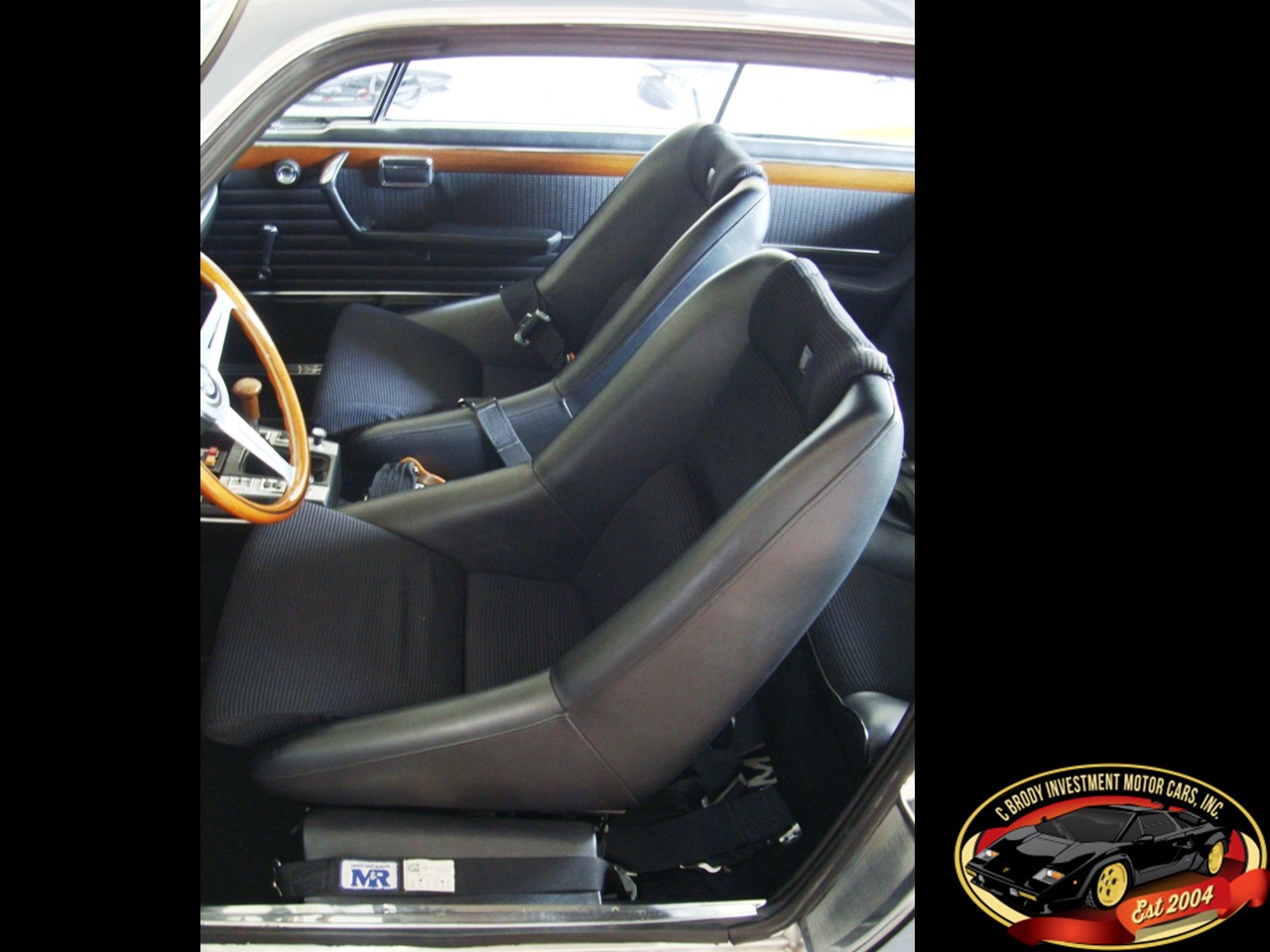 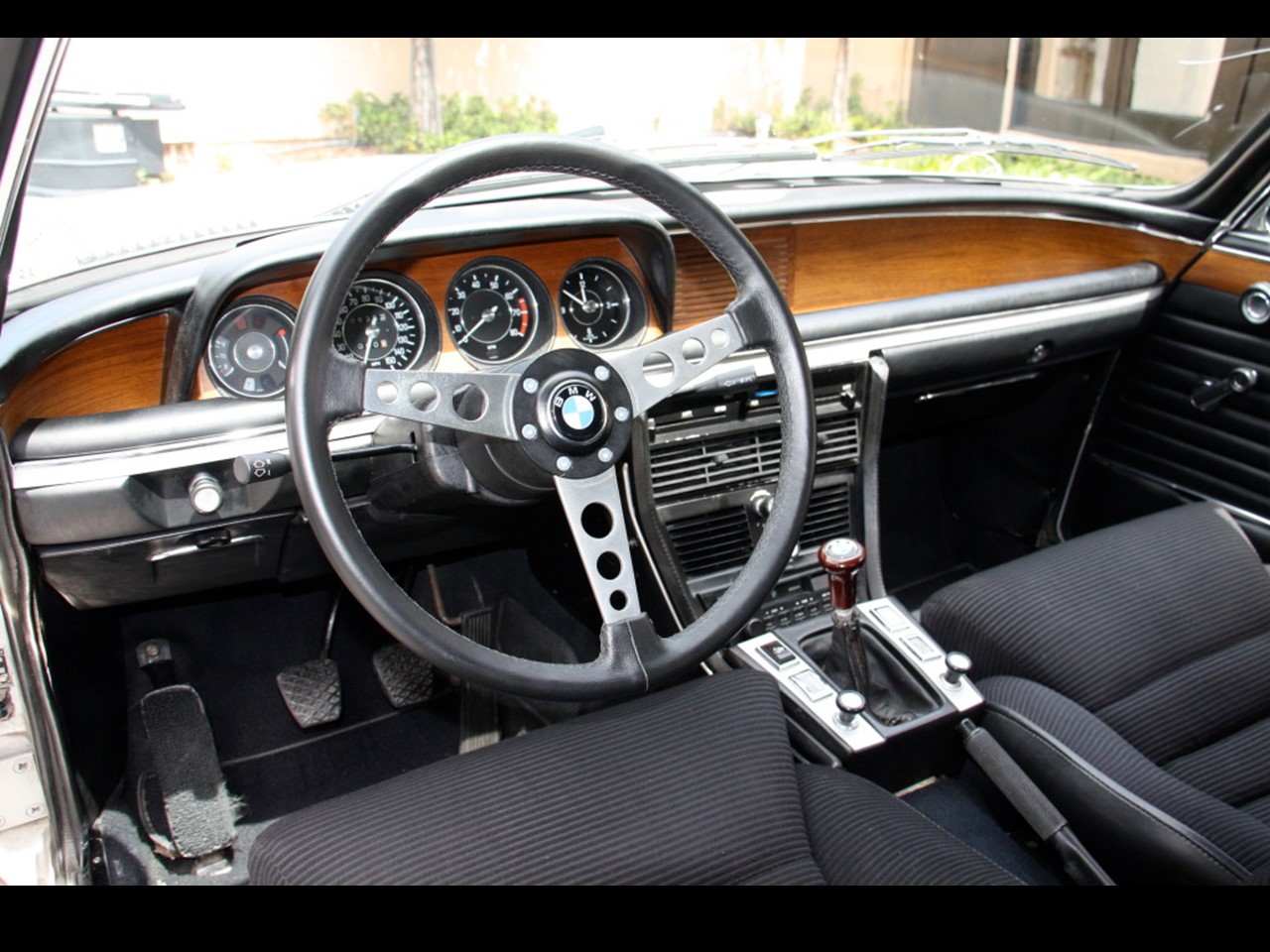 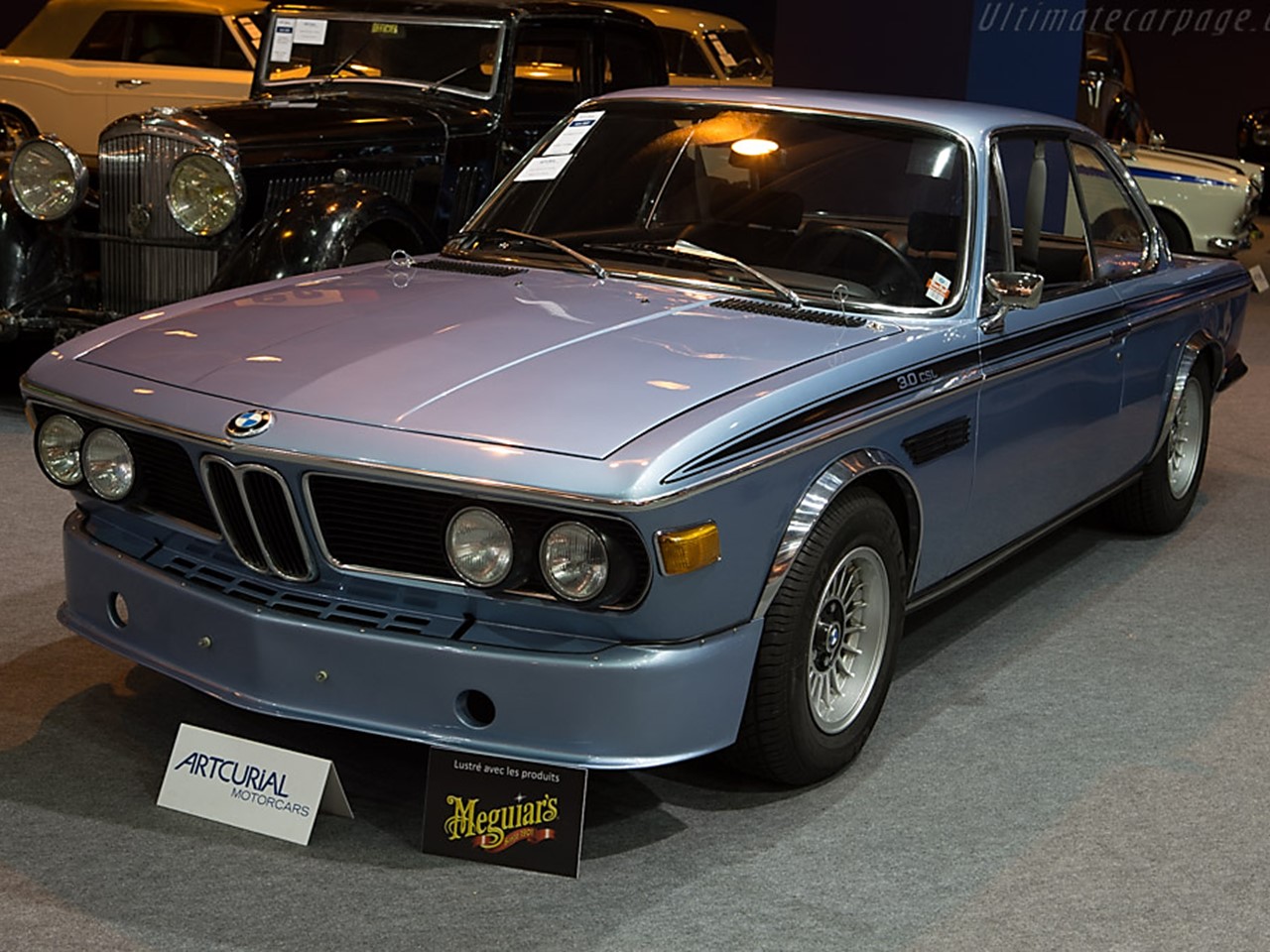 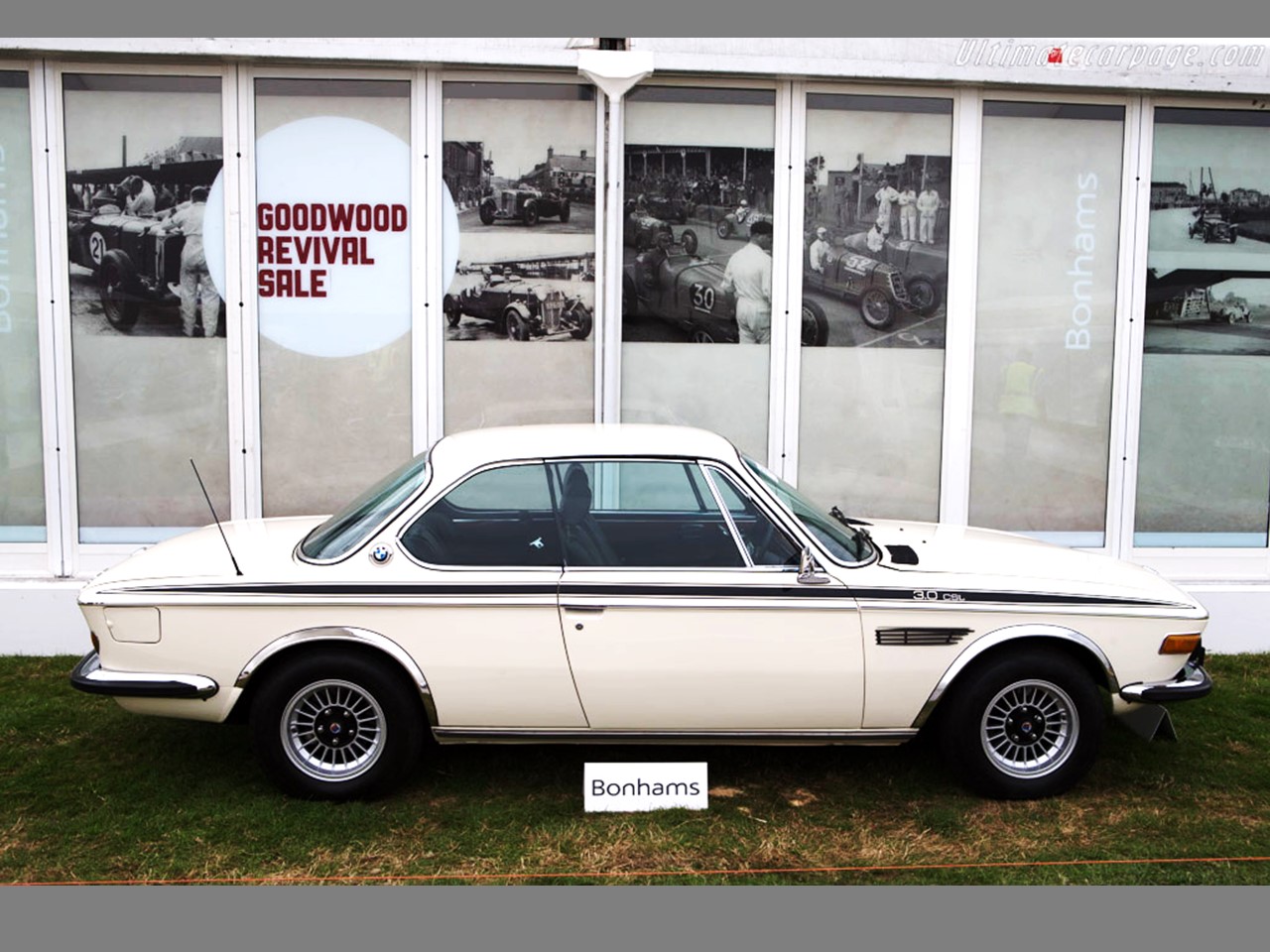 The classic 3.0 CSL coupé was available as a genuine road-going coupé The “City Package” is a tamer street-lethal, more civilized variant usable as a daily driver. This edition swapped steel for the aluminium body panels, however; not all included this. It has power steering, and the entire standard 3.0 CS/ 3.0 CSi chassis components. It also shares front and rear bumpers, windscreens, standard side and rear glass, rear window defroster, retractable power assisted windows, trunk lock and tool kit, velour carpeting, additional sound deadening materials, and under coating. This transformed the ferocious 3.0 CSL into an elegant touring coupé…and a sporty driver’s car – 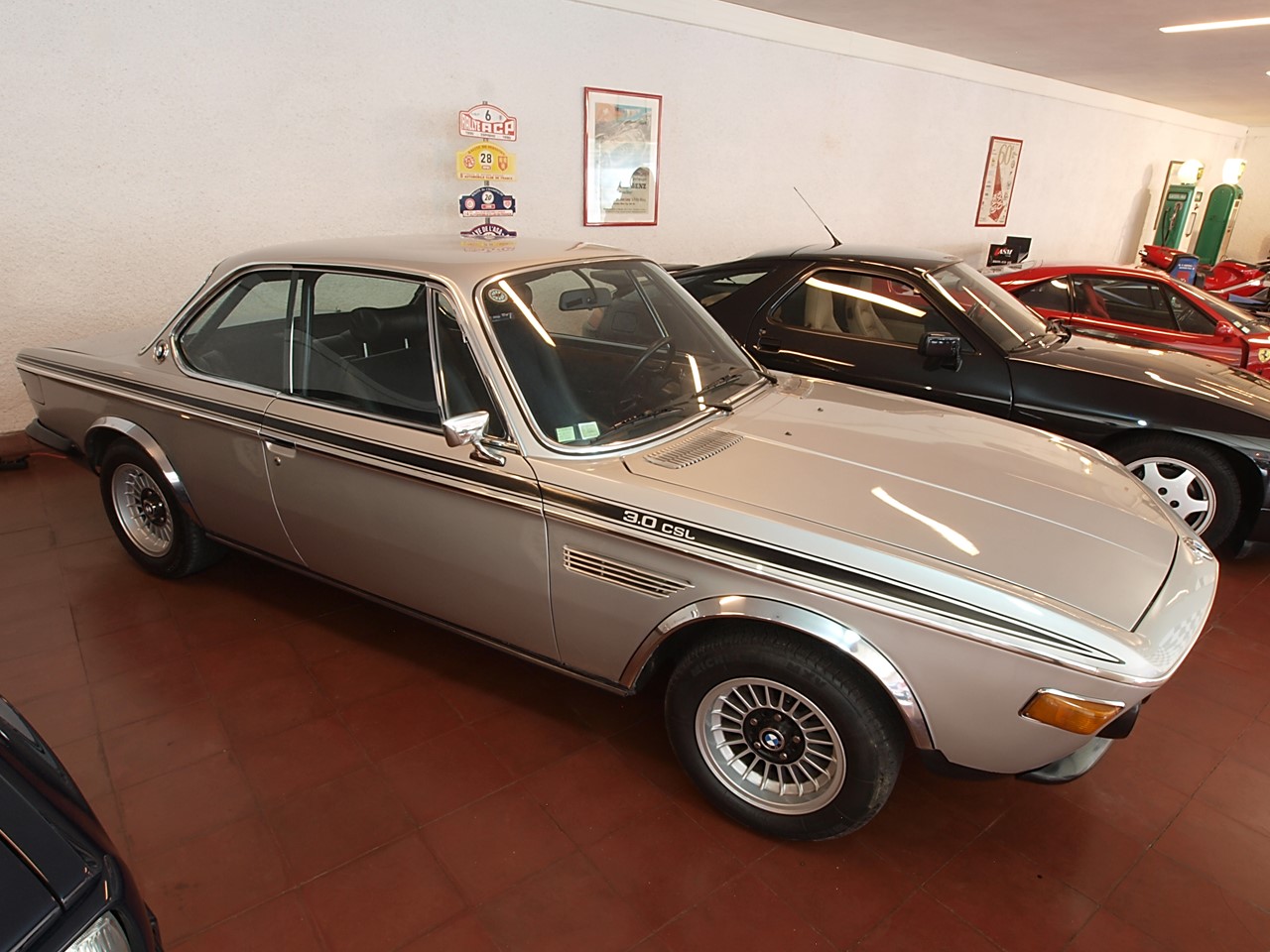 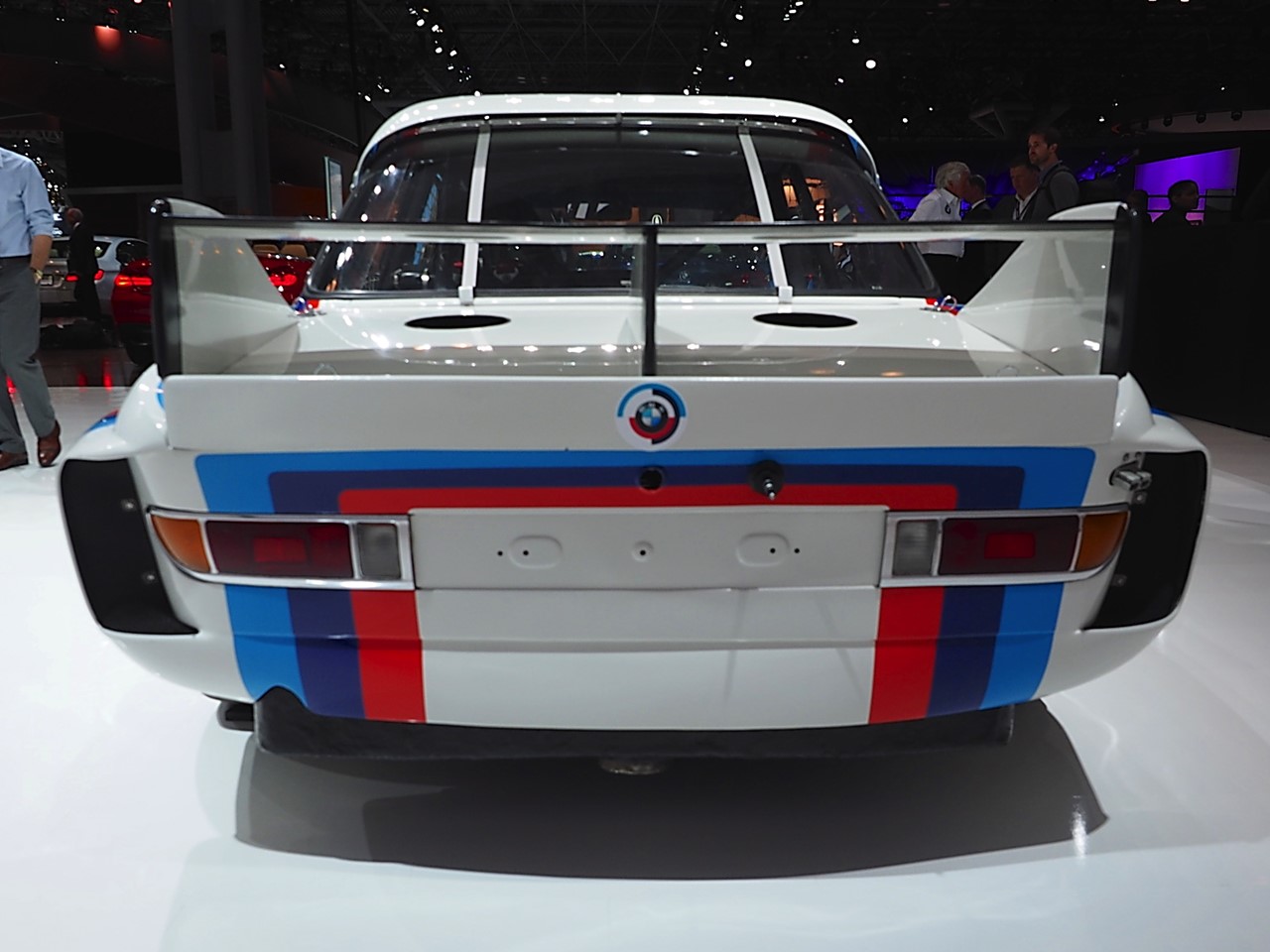 The classic 3.0 CSL is a unique lightweight high-performance champ that is considered to be the very first “M” Series model; it isn’t badged as such at this point. These exquisite racing machines were hand-crafted by Karmann Werkes in Rheine, Germany.  BMW developed four different versions over five years and were all built to European specifications. The original variant was produced in late 1971 and early 1972 using the 2,985cc M30 Inline 6-cylinder engine equipped with two Zenith carburetors. This version has an 89mm bore and 80mm stroke. It cranked 180 hp @ 6,000 rpm with 260 Nm of peak torque @ 3,700 rpm.

The final version was built in two separate production runs during late 1973 and the last were built during the 1974-1975 model years. The 3.0 CSL is about 440 pounds lighter than the standard steel bodied 3.0 CS models. Road-going variants are 297 pounds heavier than the racing version of the 3.0 CSL. All engine configurations are equipped with Getrag four-speed manual gearboxes with limited slip differentials. 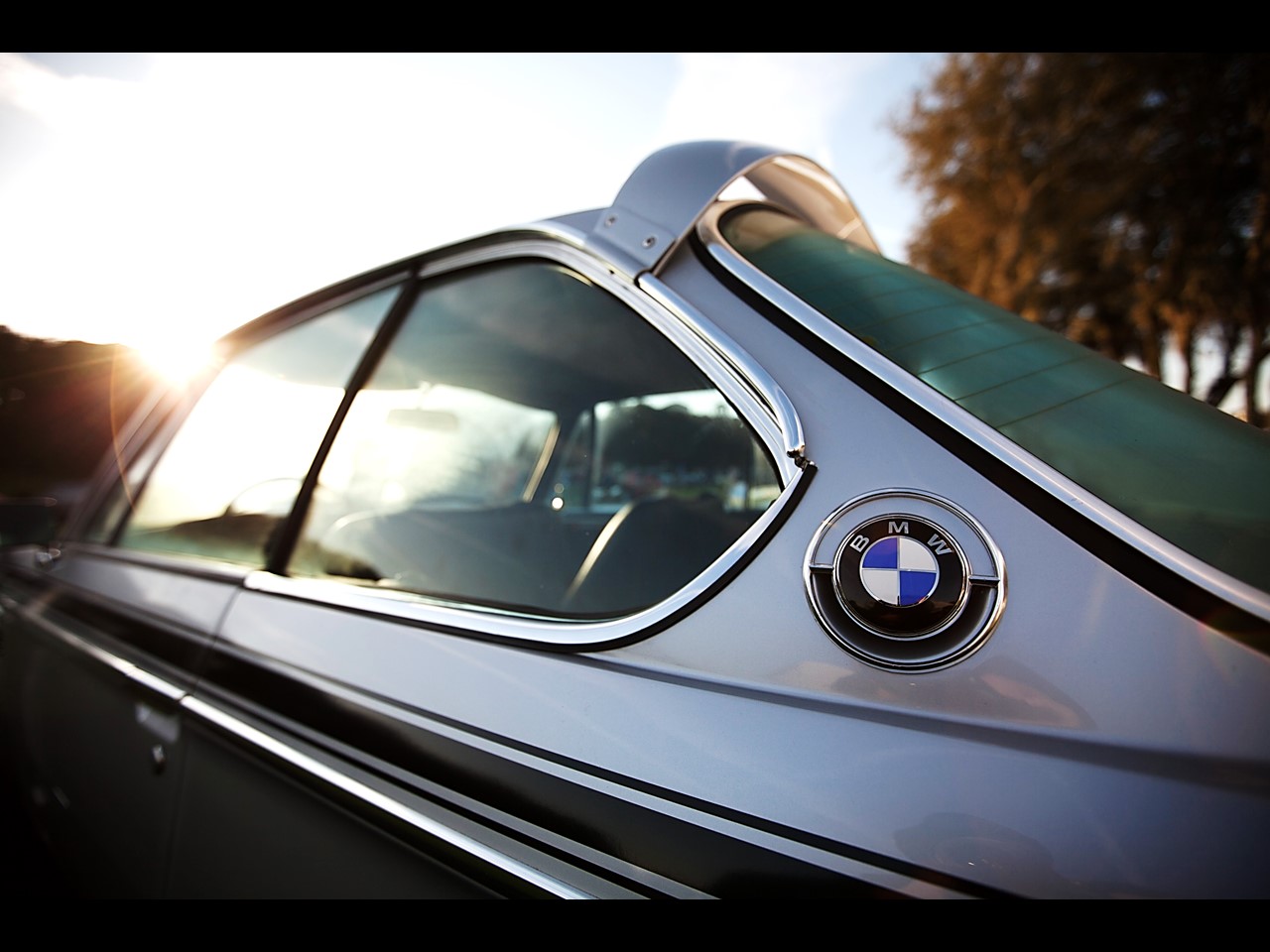 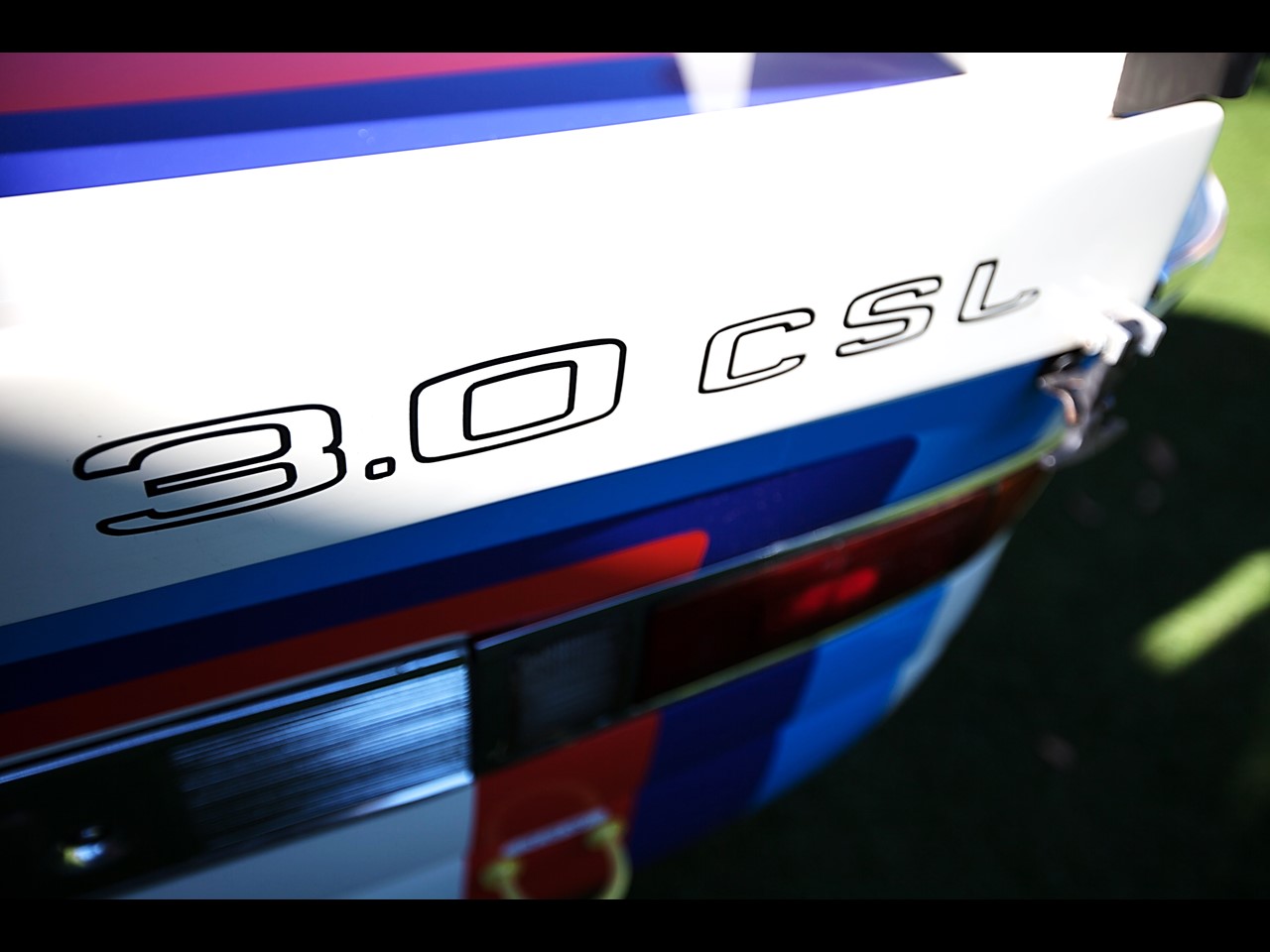 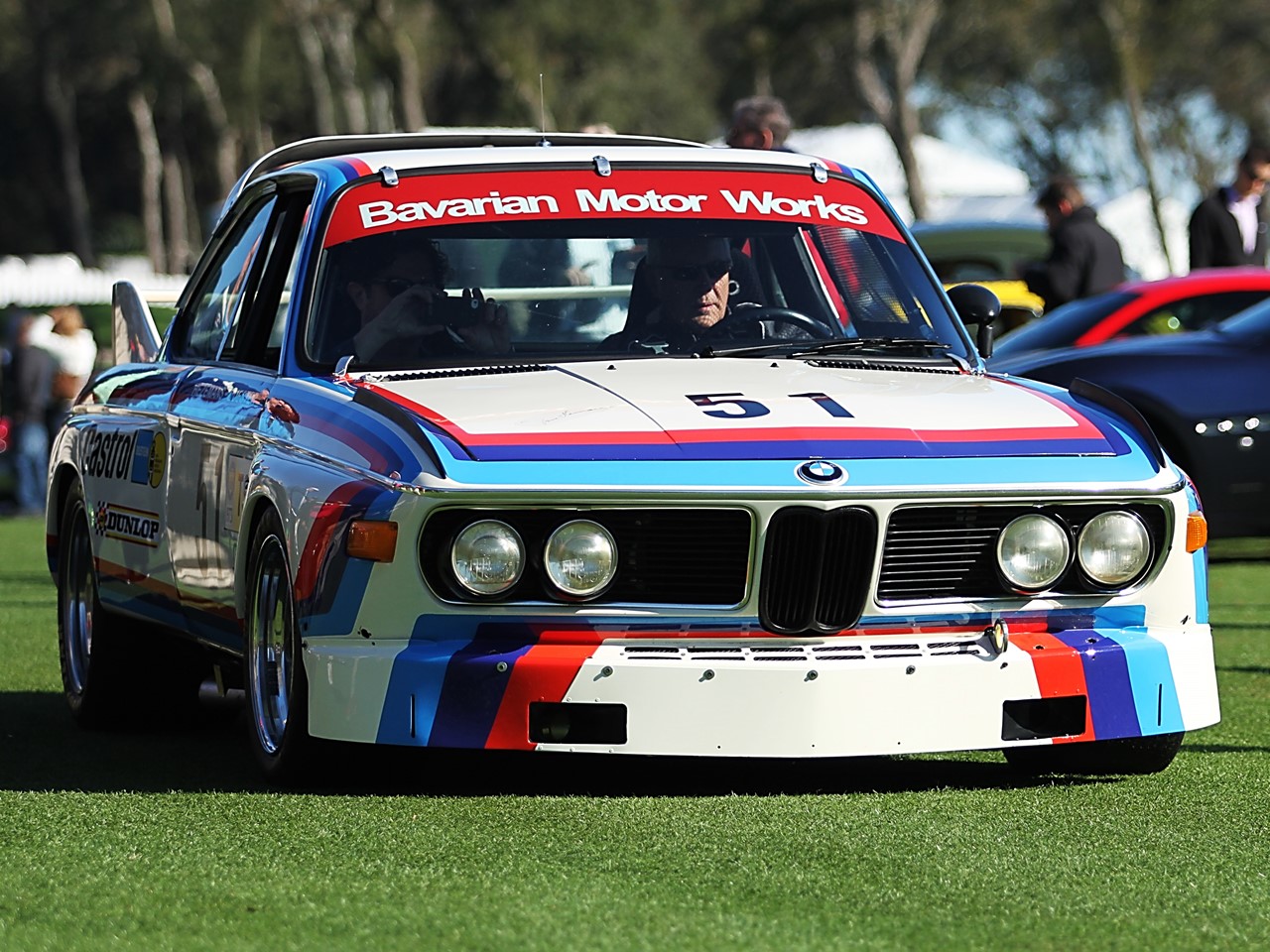 The mighty BMW 3.0 CSL shares the identical suspension as its E09 3.0 CS stablemates. It uses a MacPherson strut/ semi-trailing arm design with Bilstein gas-pressurized shock absorbers, a 20mm reduced ride height with specific progressive-rate springs, and an increased camber (1.1 degree front, and 1.0 degree for the rear). It is fitted with 10.7” four-wheel disc brakes and 195/70VR 14 tires. Staggered tires improve overall handling, in my opinion. The 3.0 CSL has a manual ZF worm and roller steering system. The City Package adds power steering, and could have been ordered as an option on the standard 3.0 CSL coupé. CSL models are not fitted with front and rear roll bars.

The classic BMW 3.0 CSL is a vicious contender. In 1973 Toine Hezemans won the European Touring Car Championship in a 3.0 CSL. He was also the co-driver with Deter Quester in a victory at LeMans in a 3.0 CSL. Hezemans and Quester won 2nd place at the 1973 German Touring Car Grand Prix at Nürburgring driving a 3.0 CSL…being beaten by Chris Amon and Hans-Joachim Stuck in…guess what…another 3.0 CSL!!! BMW 3.0 CSL’s won the European Touring Car Championship every year from 1975 through 1979. A 3.0 CSL won races in the IMSA GT Championship in 1975. 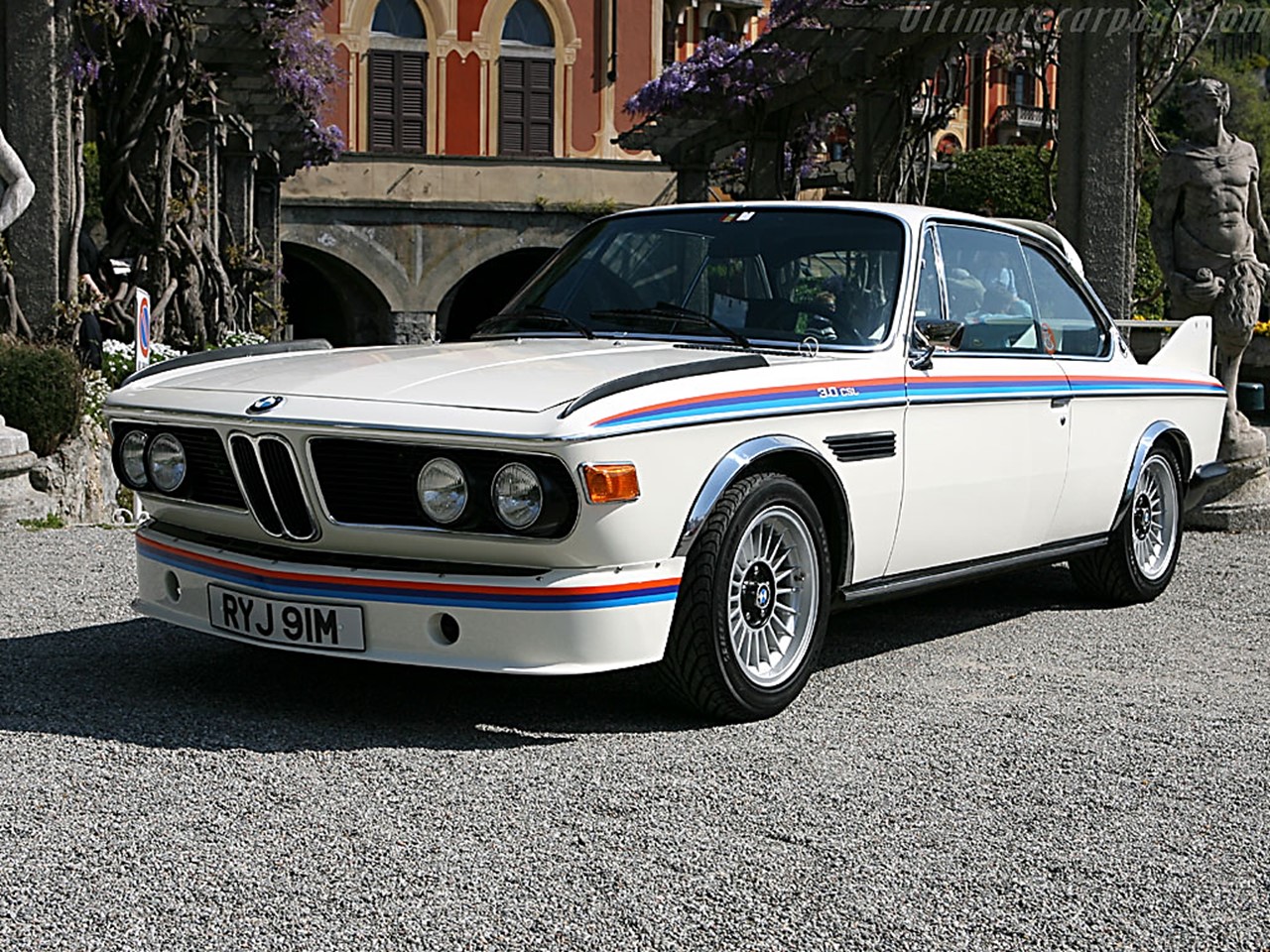 Here’s an interesting case in point. The final rendition of the BMW 3.0 CSL was homologated in July 1973 with an extreme aerodynamic body package that earned it the nickname “Batmobile.” This fully aerodynamic option included a large air dam, short front fins atop the fenders, a spoiler above the trailing edge of the roof, and a huge rear wing.

These humongous wings were not installed at the factory and were left in the boot for installation after delivery of the vehicle. This was done because the wings were not street-legal in Germany. A BMW 3.0 CSL is indeed a fierce competitor – and is considered highly sought as collectible cars by connoisseurs world-wide. This is the ultimate driving machine in one of its most extreme interpretations – 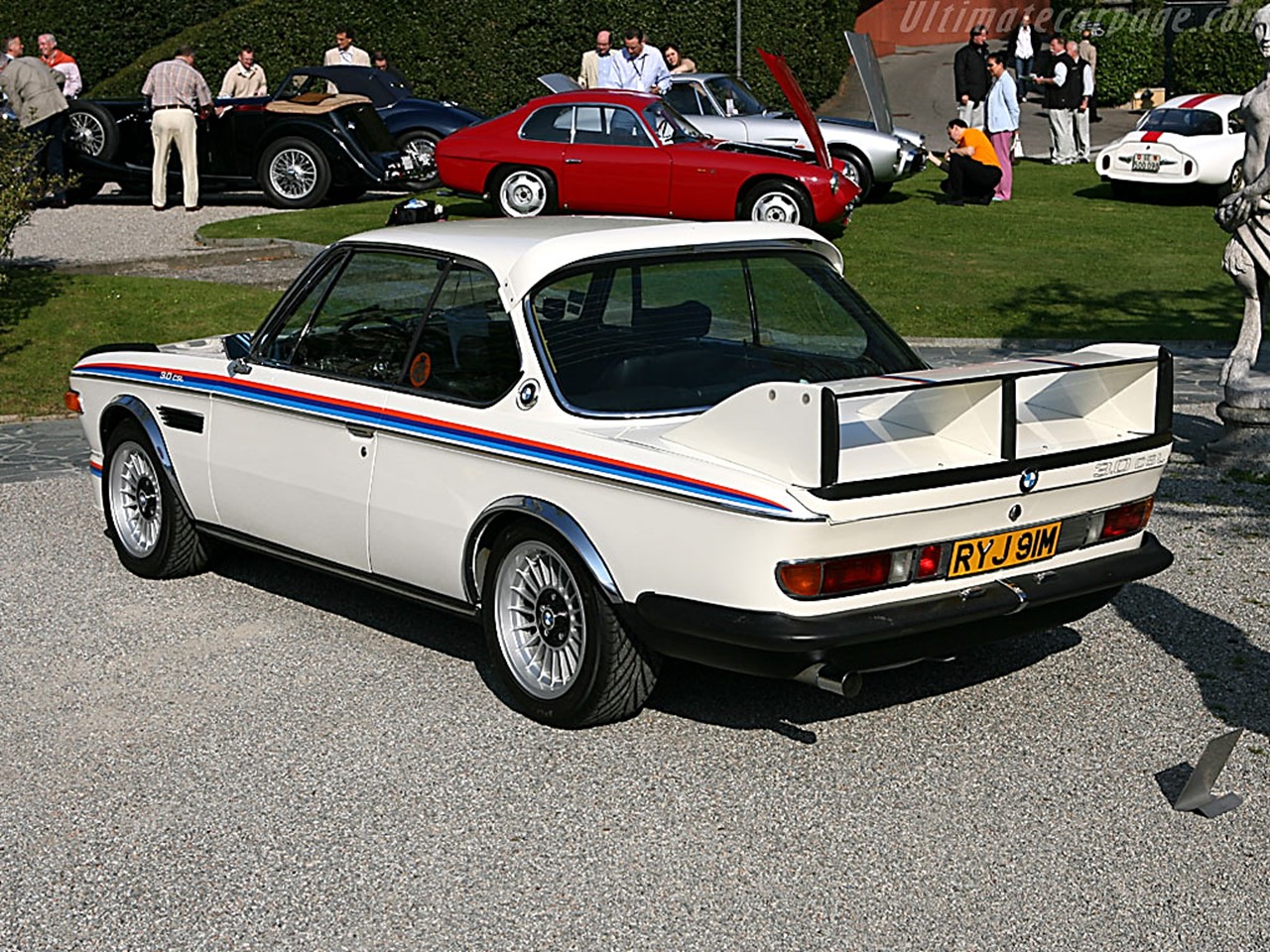 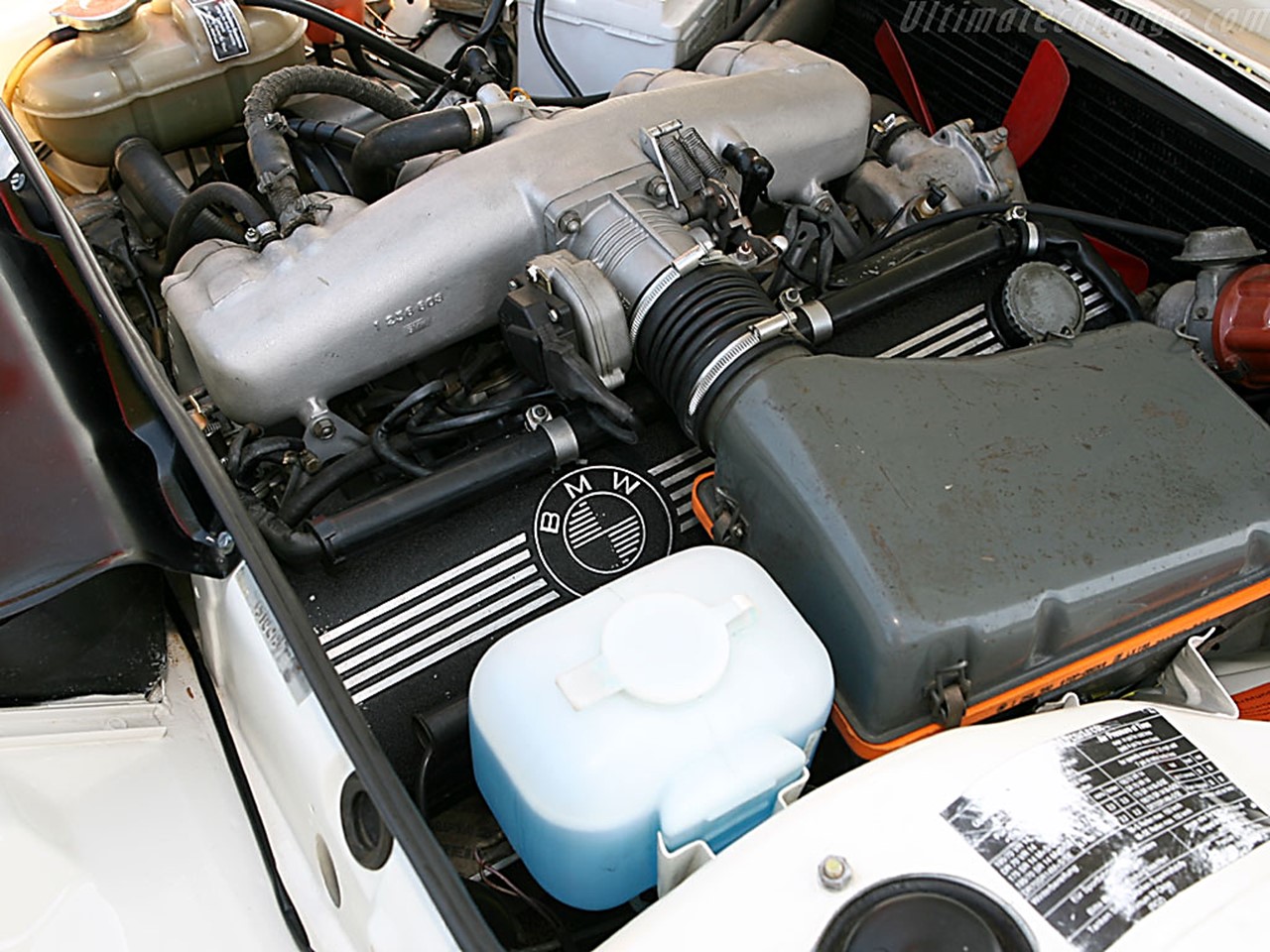 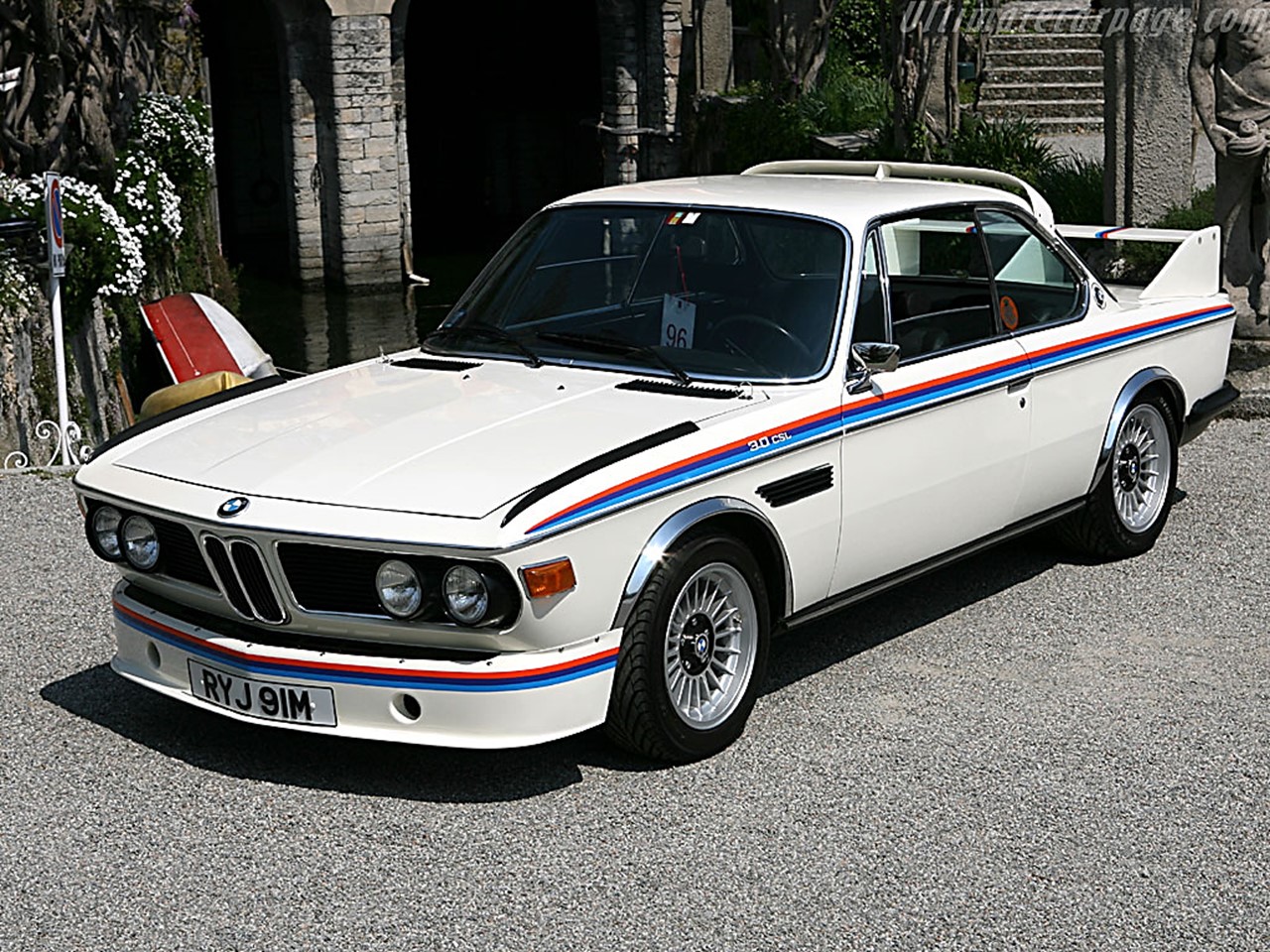 Now…let’s fast forward to the 2015 BMW 3.0 CSL Hommage Concept coupé. This is a stunning example of a timeless classic. The design team’s tribute captures the classic beauty and overall finesse of the original in a 21st century interpretation. The engineering achievement is exemplified by the lightweight design and performance. Cutting edge technology makes it an automotive collage of high-performance success. It exudes dynamism and sophistication as did its predecessor. The BMW 3.0 CSL Hommage Concept coupé is painted in the authentic original color Golf Yellow. It is an aerodynamic sculpture of raw power…

The classic BMW 3.0 CSL used aluminium to keep its architecture lightweight…the carbon fibre technology rules with the 3.0 CSL Hommage. Carbon Fibre Reinforced Plastic offers optimum weight-to-strength ratio. It is lighter than aluminium and far more versatile.  The 3.0 CSL Hommage Concept continues the original lightweight design principle for both interior and exterior. BMW is the world leader in CFRP technology; their expertise is clearly evident in the new 3.0 CSL Hommage.

The BMW 3.0 CSL Hommage Concept is an efficient aerodynamic sculpture. Its architecture is designed to hint at its illustrious predecessor, but aggressively sets the center stage with a unique stature all its own. The sculpted architecture manages the air flow efficiently around the entire vehicle. The front air deflector vents the engine bay for efficient cooling. The wings over the rear wheels send air flow around the vehicle. Small rearview cameras reduce aerodynamic drag. A large rear wing increases downforce to the rear drive wheels improving power transmission. It has an air curtain and air breather system to optimize airflow to the rear wheels cooling the brakes.

The BMW 3.0 CSL Hommage Concept boasts a fierce front end ensemble. It is the widest and lowest front end design in the industry, which gives it a formidable and aggressive, high-performance stance. The familiar kidney grille has been refreshed to reflect a more contemporary look. Laser light and LED technology assimilates art lighting graphics. The flat contours of the headlamps are typical characteristics of BMW. The fancy “X-shape” inside the headlamps hints at the headlamp X-stickers used on classic race cars. The large carbon fibre front splitter combined with the kidney grille is a contemporary interpretation of the classic 3.0 CSL’s sharknose styling. Past, present, and future styling cues come together for fresh new racing car flair with a touch of class… 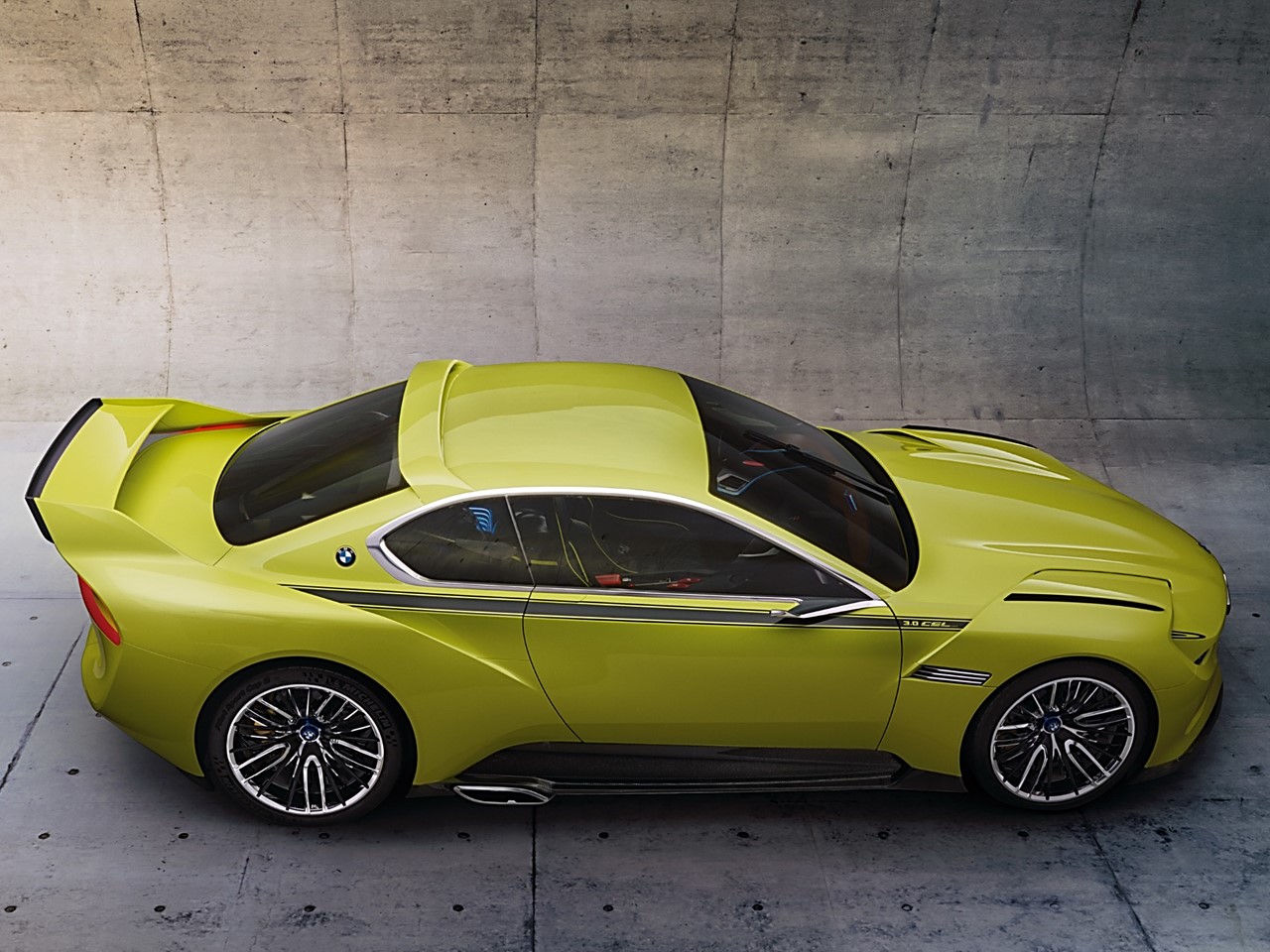 The familiar “Hofmeister Kink” is deftly worked into the style perfectly. This roofline is a throwback to the original rooflines that did not flow into the tail. The BMW logo proudly adorns the C-pillars in a traditional manner. This augments the athletically wide shoulders and high haunches to the sides.

Its dynamism is showcased through shadow lines and interplay between light and dark shadows. It appears to be in motion even when it is parked. Carbon fibre technology is used throughout its architecture. The black matt and high gloss 21” alloy wheels adds a 21st century nudge to the car’s attitude. Air control blades in the interstices of the wheel rims further optimize aerodynamics.

The BMW 3.0 CSL Hommage Concept sports a viciously aggressive rear design. The focal point is its wing that flows into a contour atop the rear fenders. The body panels form geometric symmetry throughout its architecture. This is a ferocious 21st century supercar in every respect. LED strips are designed into the spoiler to link the taillamps together. The apron has a CFRP diffuser to optimize downforce in conjunction with the large wing. The powerfully sculpted rear end design creates a visual impression of raw power. The light and dark shadow interplay makes the car look different each time you look at it – 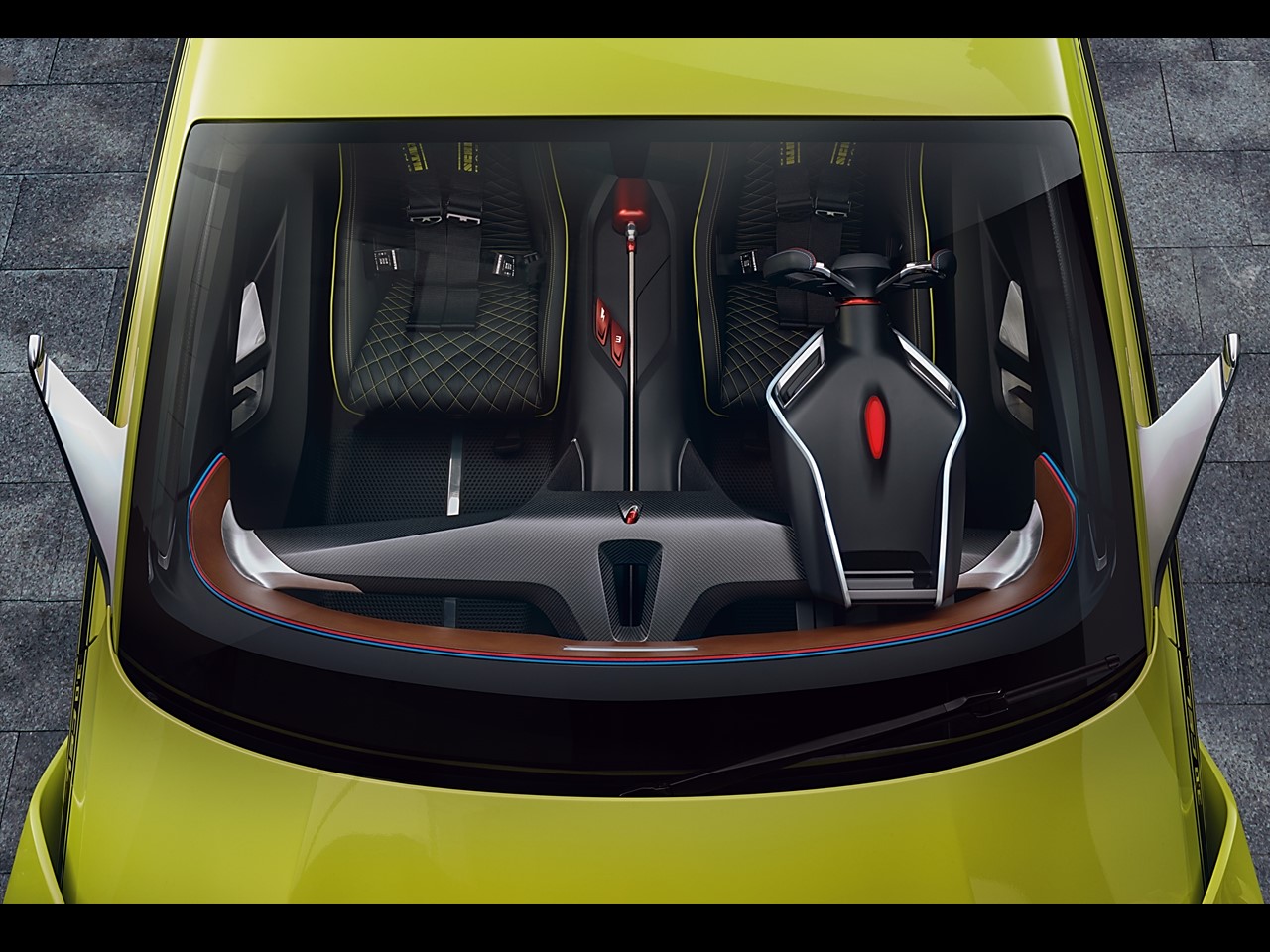 Keeping in tune with the minimalist approach as its classic predecessor, the interior is pared down to an absolute minimum. The all CFRP interior is a fresh new interpretation of the 3.0 CSL bringing it to a contemporary style. The only wood-like presence is the instrument panel which is a structural cross member. It is a clear reference to the classic 3.0 CSL coupé. The instrument panel shows only necessary information such as current gear selection, speed, revs, and shift points. It’s the carbon fibre technology that creates a special appeal. Every part has a high quality look and feel. It is understated elegantly, yet sporty –

The racing theme for the interior includes two bucket seats. They have a six-point belt system. Red anodized safety features include outlet nozzles for fire extinguishing foam, the fire extinguishing mechanism, the fire extinguisher itself, and two emergency shut-off switches on the center console. In place of a rear bench seat are covers for the eBoost energy accumulators which have LED strips creating a holographic 3-D effect on them. The only elements in the rear are two helmets integrated into the transmission tunnel, and are held in place by a belt when not in use. 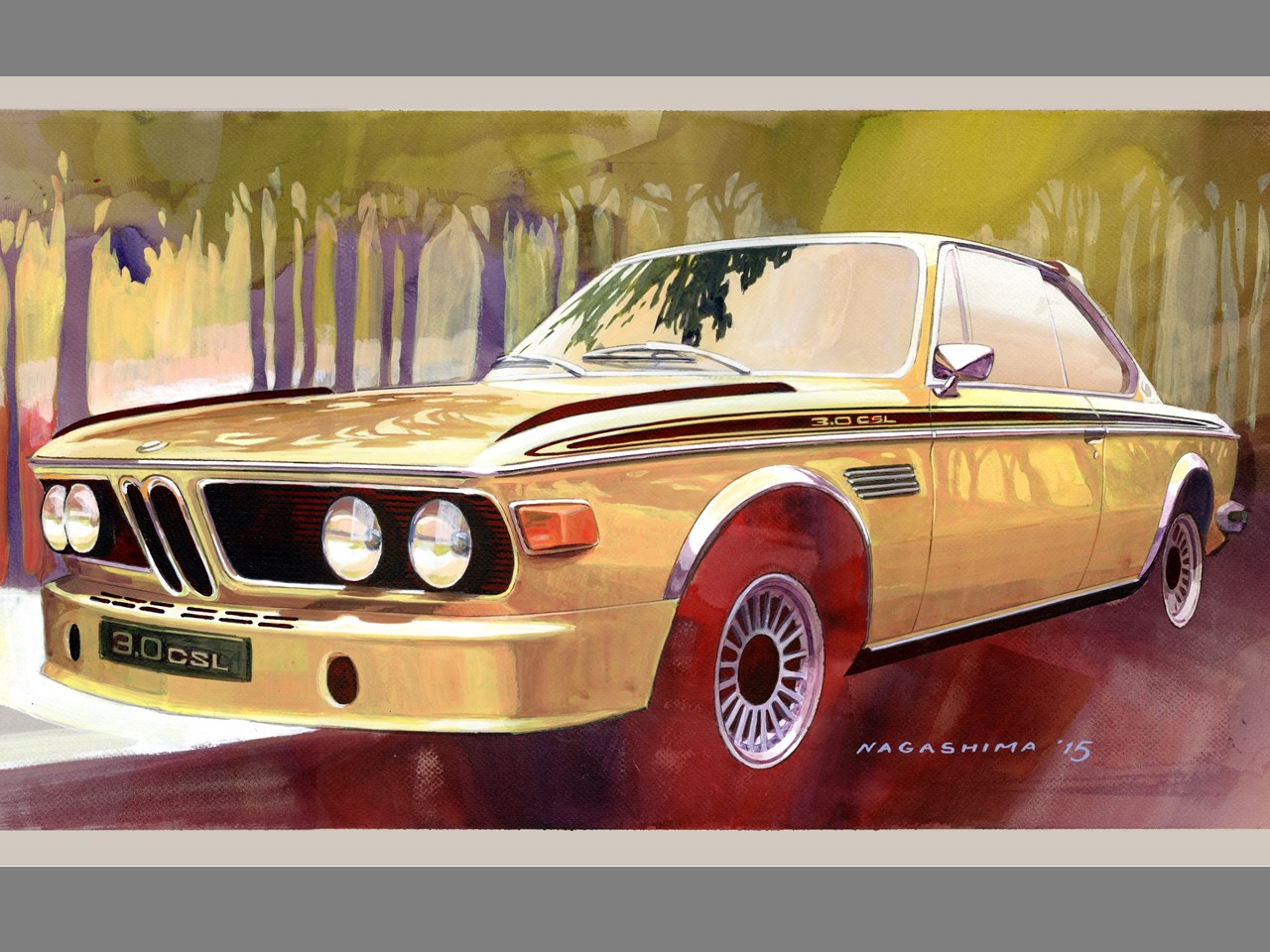 BMW’s commitment has to been to design and engineer automobiles noted for extraordinary stamina. A BMW is bred for intense motorsport competition. The BMW 3.0 CSL is a fierce competitor winning European Championships. Its impressive portfolio of victories includes the 24 Hours of LeMans and the grueling Nürburgring. The impressive 3.0 CSL left its mark in automotive history as an indomitable persona. The CSL…“Coupé Sport Leichtbau” or Light Sport Coupé, is a lightweight and extremely potent design built from 1971 until 1975 in various forms.

The BMW engineers designed a one-off creation as tribute to commemorate the achievements of the formidable 3.0 CSL…the 3.0 CSL Hommage Concept celebrates this notorious supercar brilliantly. It refines both retro and contemporary styling cues creating a striking 21st century interpretation. The designers used light and shadows in combination with contours for special effects for this timeless masterpiece. The 3.0 CSL Hommage Concept uses the latest CFRP technology for both exterior and interior. As far as the Hommage’s production…we will have to wait and see what form it will arrive. BMW concept cars always predict future production models – 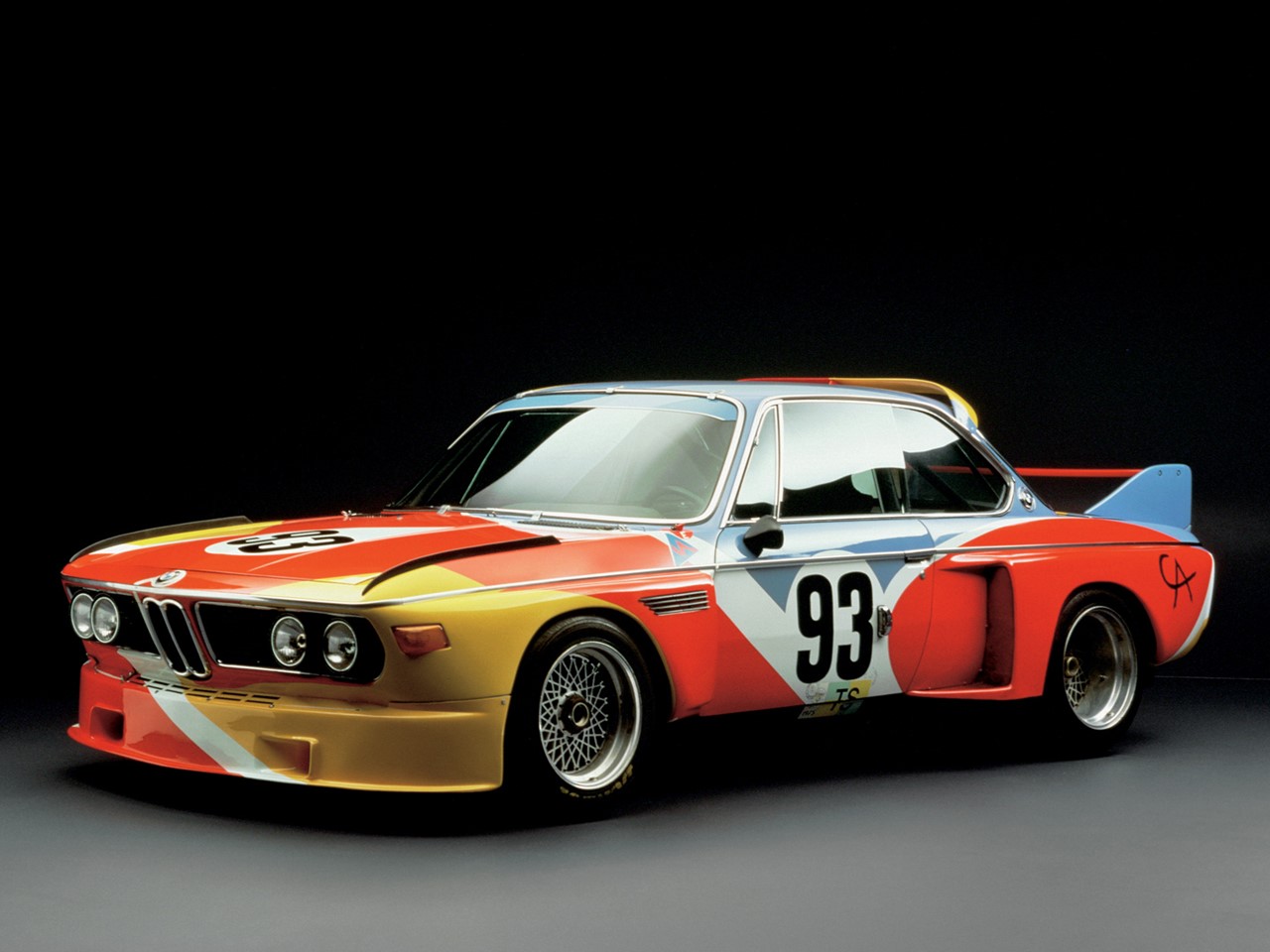 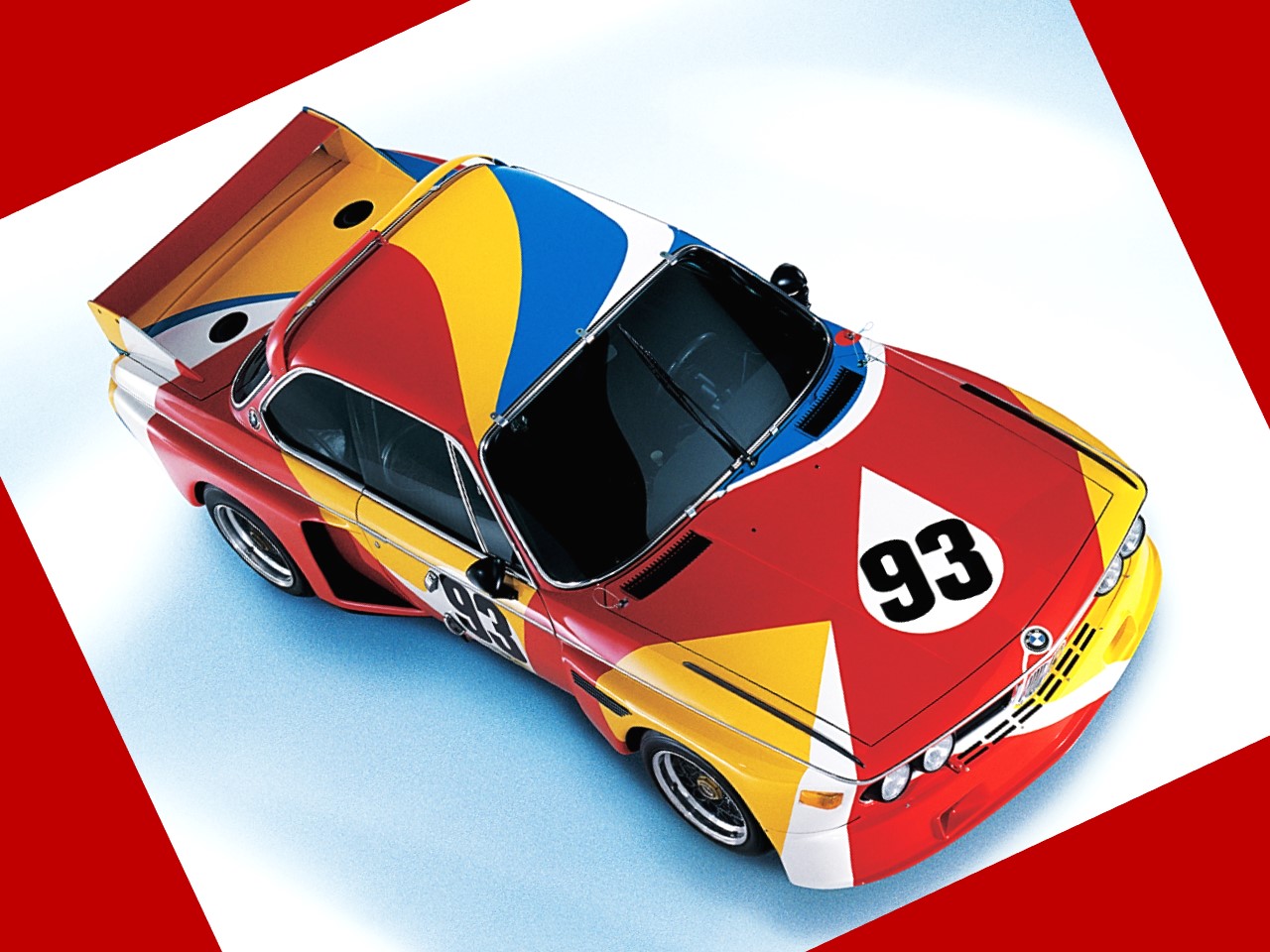 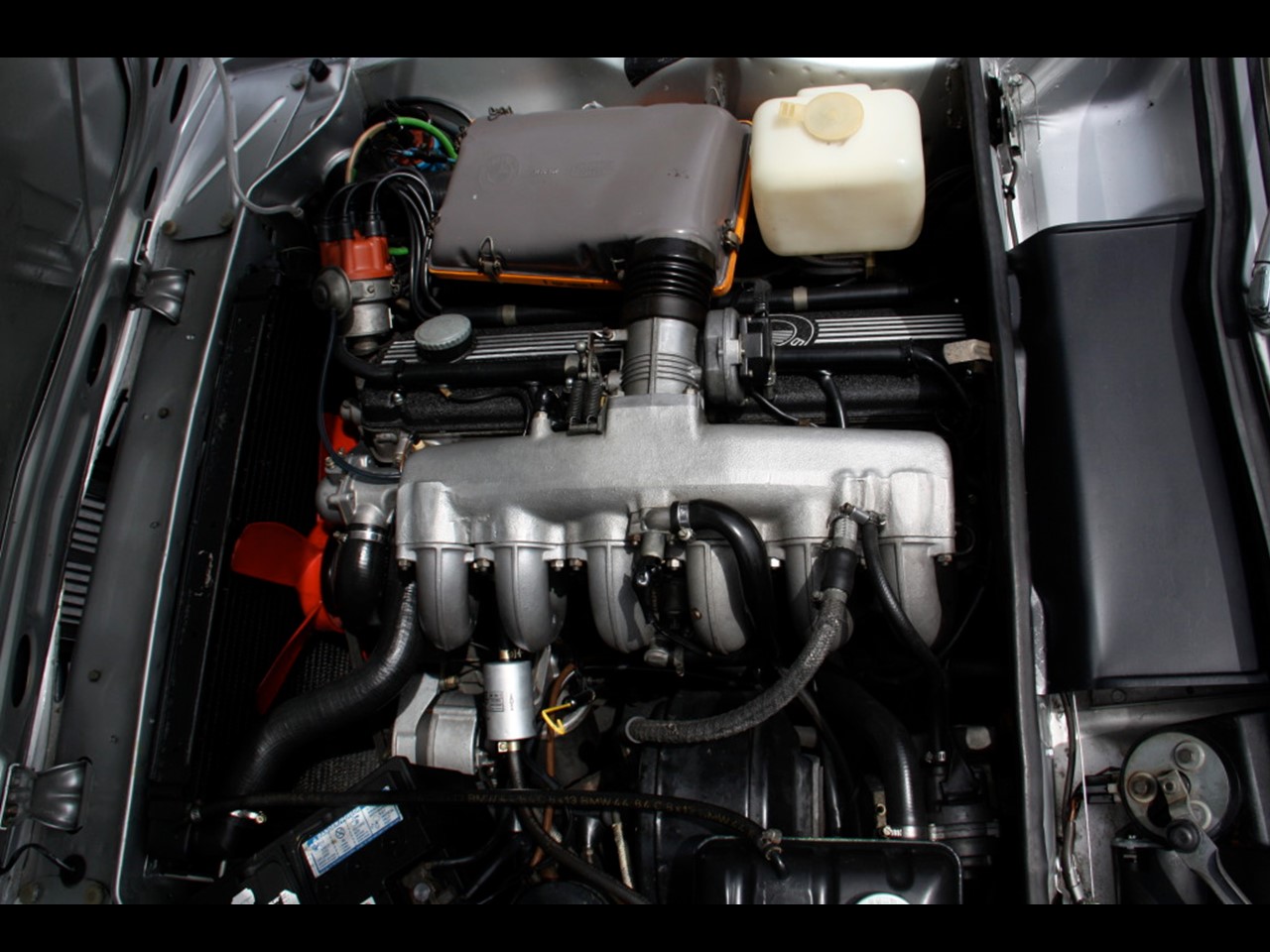 Special thanks to Craig Brody, The Ultimate Car Page, Conceptcarz, and Mad 4 Wheels for the use of their photos of these extremely rare automobiles.