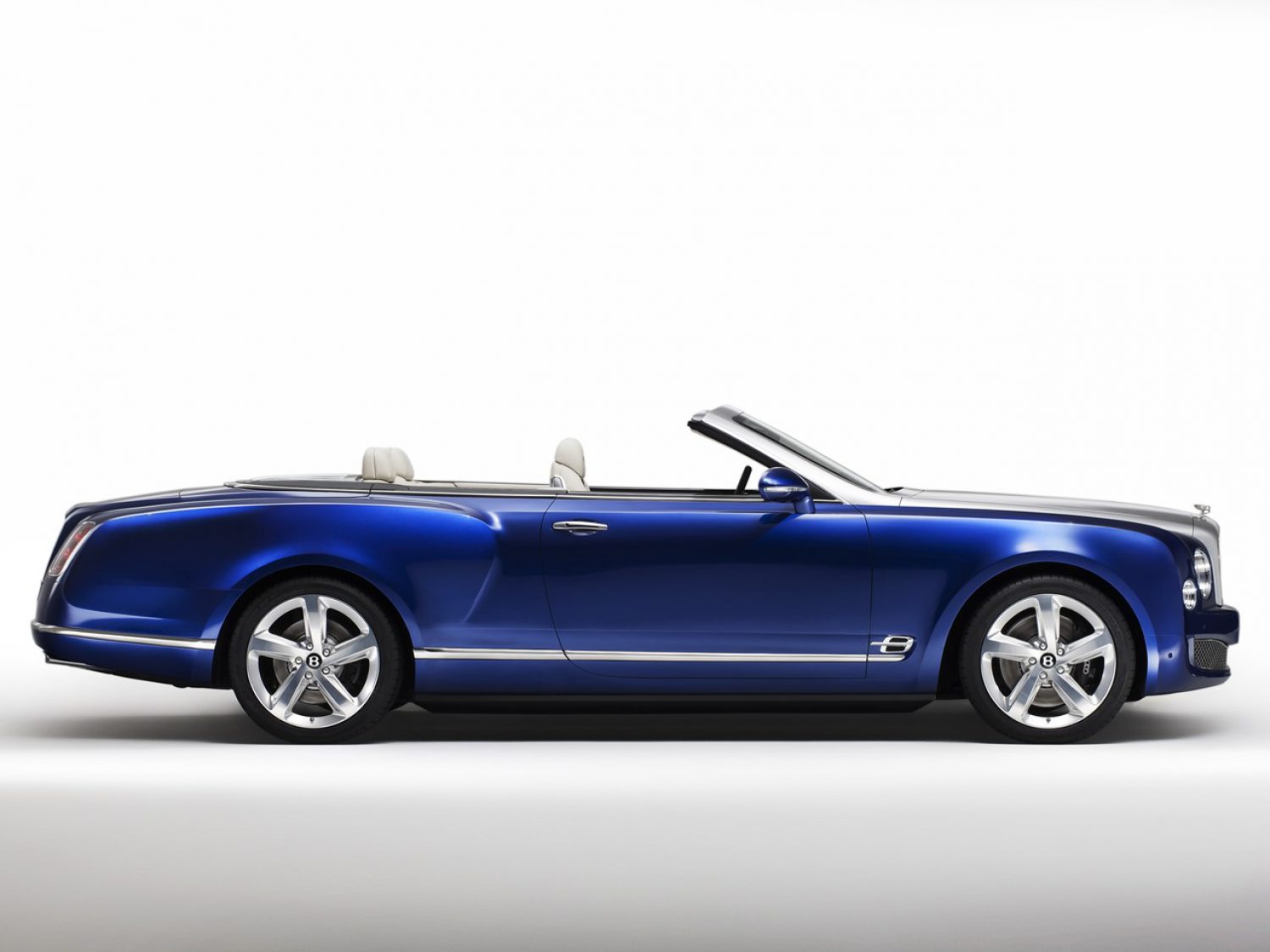 Our feisty feline friend is on the prowl…

Our beloved feline friend was marketed as “The new 1995 Jaguar XJ Series.” The XJ was re-engineered to be quicker, quieter, safer, and smarter than its predecessor. “More” is the operative word for the dramatic make over. The XJ for 1995 presented more power, more space, more comfort, more quietness, more driving ease and more security…it was more in tune with Jaguar tradition and the principles set forth by Sir William Lyons, former CEO of the brand. For $62,200 you could have parked this in your garage…X300 XJ6 Vanden Plas is the most luxurious JAG-U-R in the model year offerings. Grace, space, and pace received a new definition – 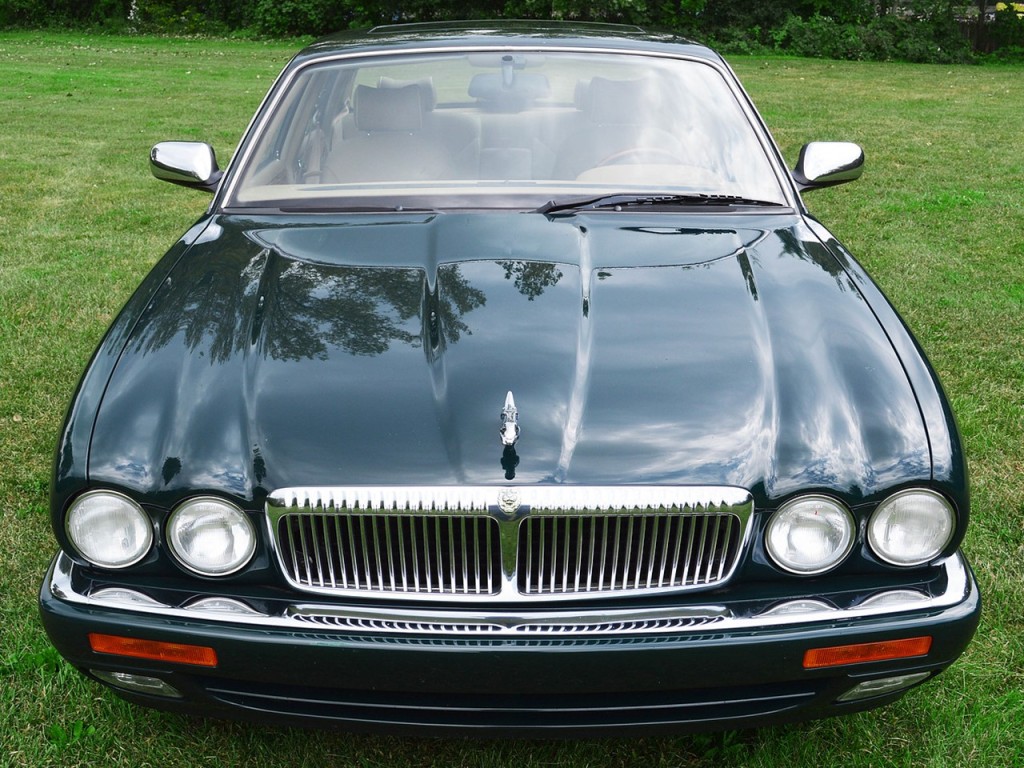 The Jaguar XJ (X300) is a large luxury saloon built by the brand between 1994 and 1997. This is the first “XJ” built entirely under Ford management. This generation Jag, the X300, emphasized improved build quality, improved reliability, and a return to traditional Jaguar styling elements. The “New XJ Series” debuted at the October 1994 Paris Motor Show. The X300 Series was the result of a £200 Million facility upgrade which used automation and the latest technology. Their welding robotics were manufactured by Nissan. 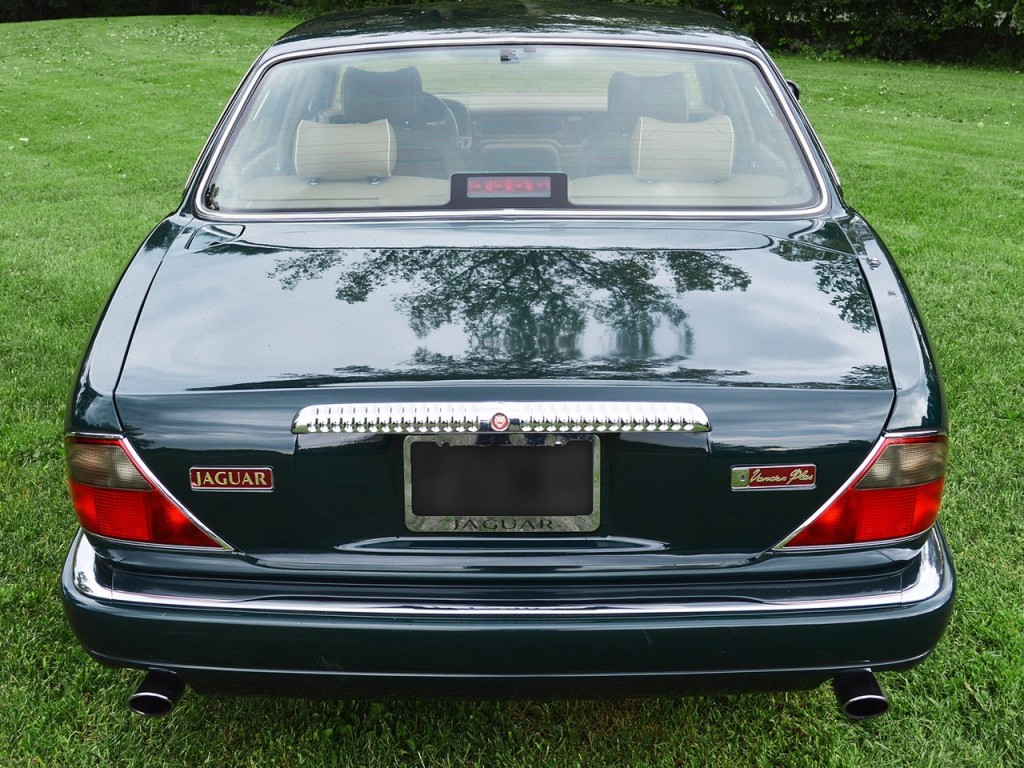 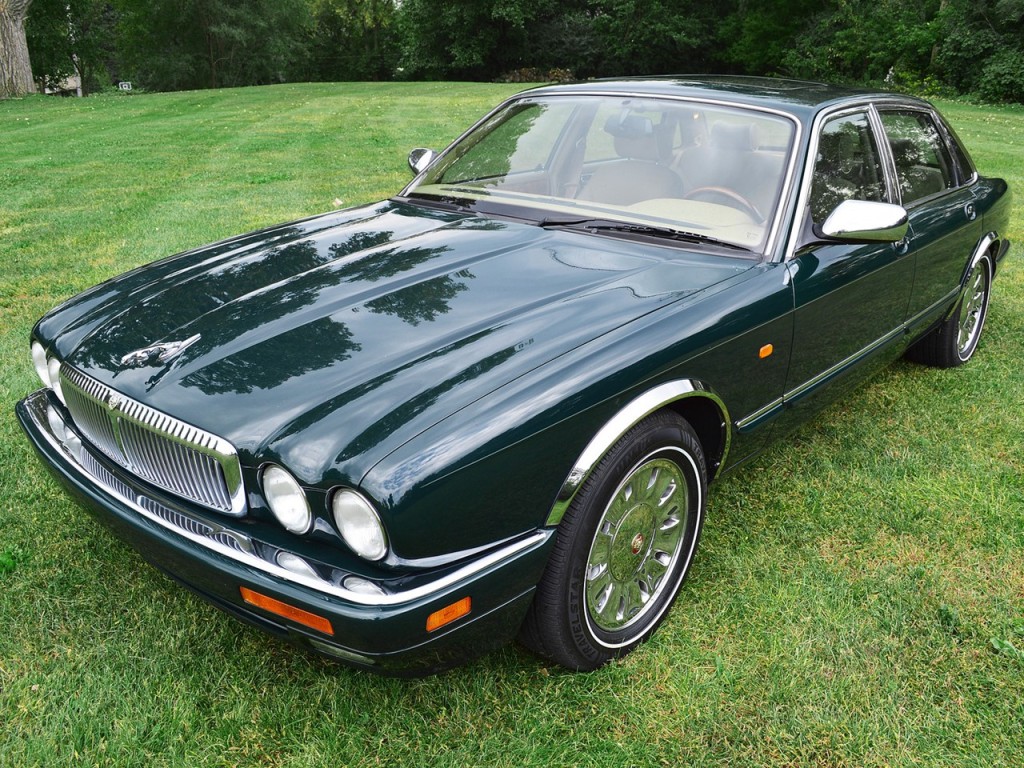 The highest trim level of the X300 cars are badged “Daimler.” In North American markets it is badged as Vanden Plas. The long wheelbase version is available only as the Vanden Plas in North American markets. These exclusive models featured all-chrome trim found on the Jaguar Sovereign. The upgraded Vanden Plas also included chrome door handles, a gracefully fluted radiator grille surround, and “Vanden Plas” badging on the rear boot lid. A total of 3,831 were built as the 4.0 litre with the standard wheelbase. 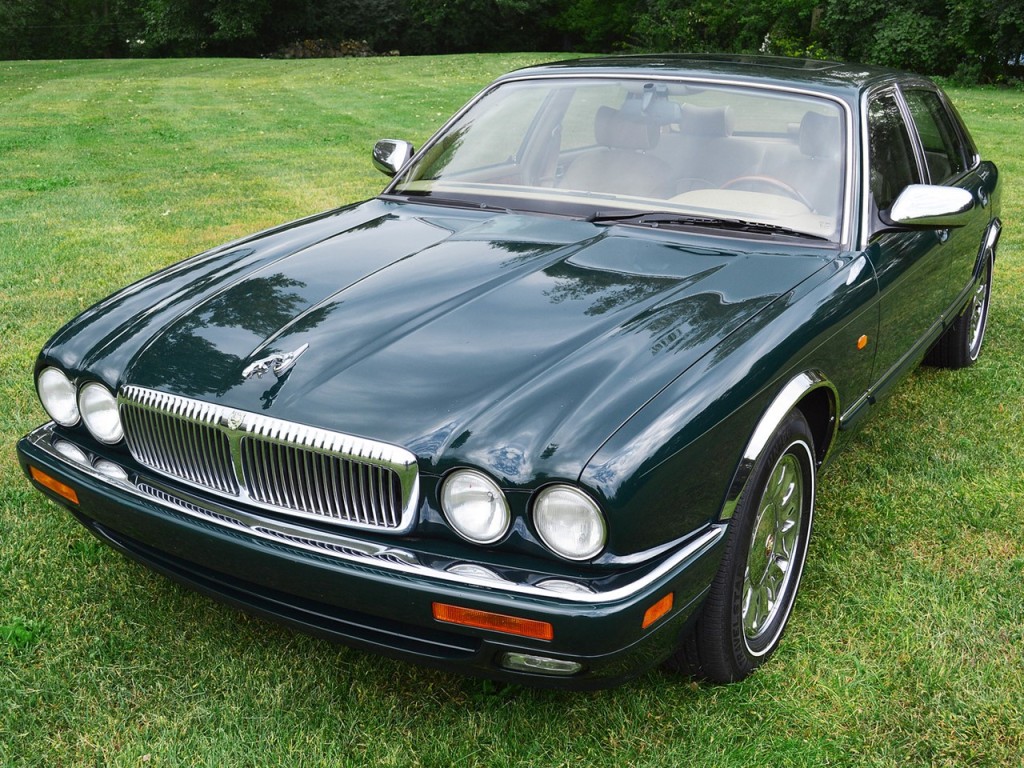 The X300 maintained the sleekness Sir William used as styling continuity. The nose had a lower rake. Its fluted clam shell bonnet flowed into the headlamps. Jaguar designer Geoff Lawson is credited with the X300’s styling refresh. The car had a total freshening front to rear. The styling hasn’t changed much through the years. If you look at the X300 long enough, you can see the old Jaguar MK X (Mark ten) from the 1960s in its silhouette. Parked…the Jaguar X300 looks like a big cat ready to pounce – 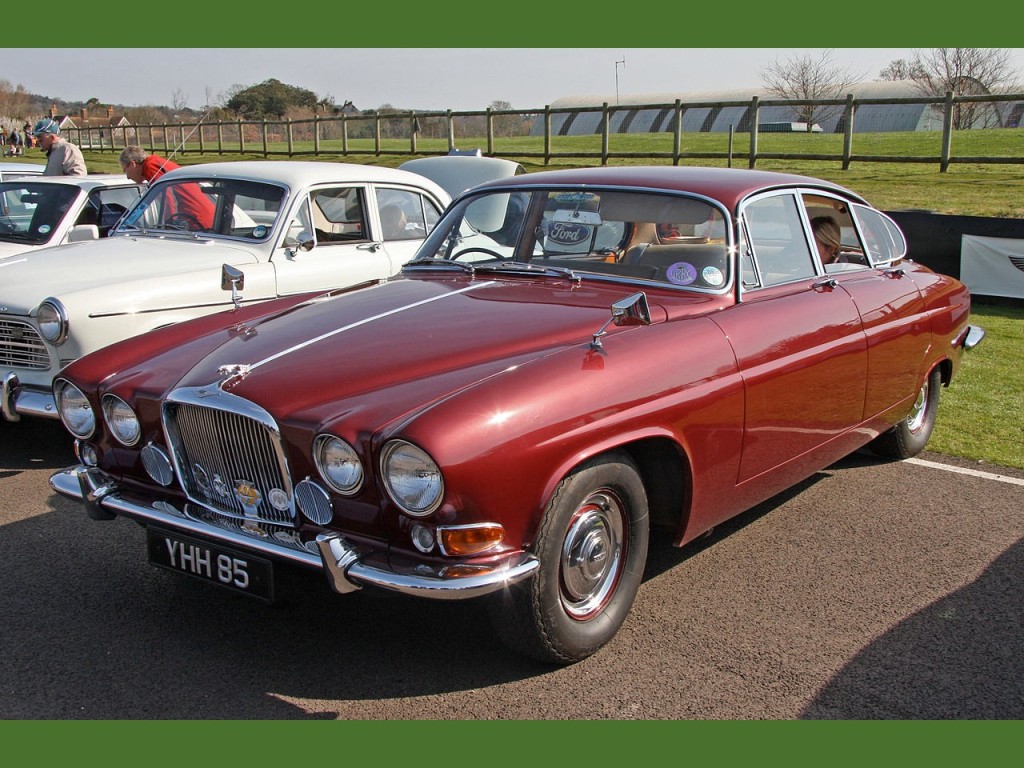 The Vanden Plas is the epitome of Jaguar elegance. It cossets its passengers in the lap of luxury. Upon entering the cabin, one is captivated by the heady Jaguar experience of aromatic leather and wood. This is an attribute shared by fine automobiles such as the Rolls Royce. It is part of the car’s character. This is that extra measure of luxury. Jaguar is best known for its elegance and style.

The interior is tastefully hand-crafted with supple, natural grain Connolly leather. Rich, warm, walnut wood trim surrounds the cabin and is augmented by matching walnut picnic tables for the rear seat passengers. There are lambswool rugs in the foot wells for added luxury.  A new overhead roof console provides a sunglass compartment. It also houses controls for the sunroof and integrated 4-channel garage door/entry gate opener. The Vanden Plas escalates the XJ6 to superlative heights in comfort and convenience. These are some of the most lavishly equipped luxury sedans in the world. 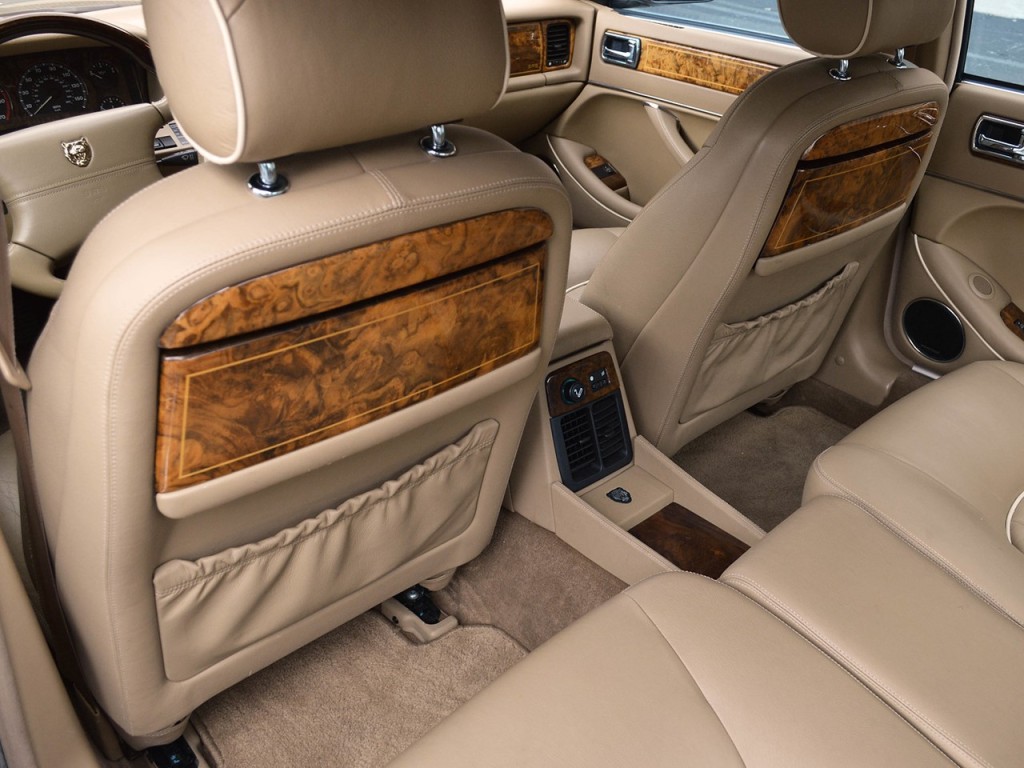 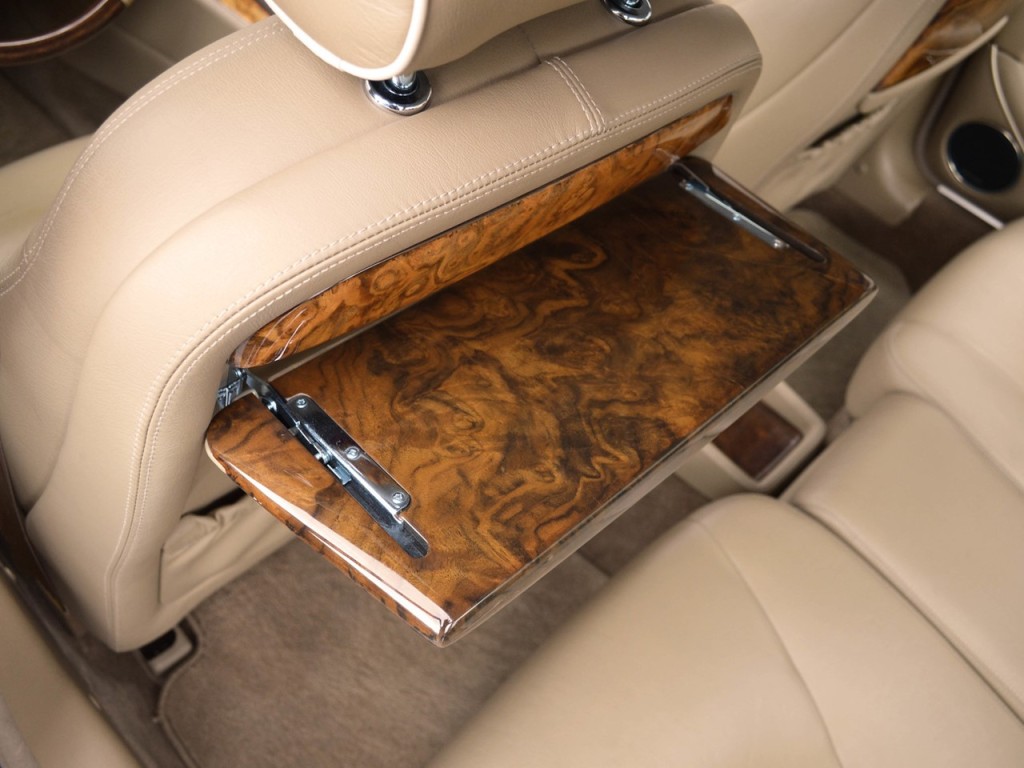 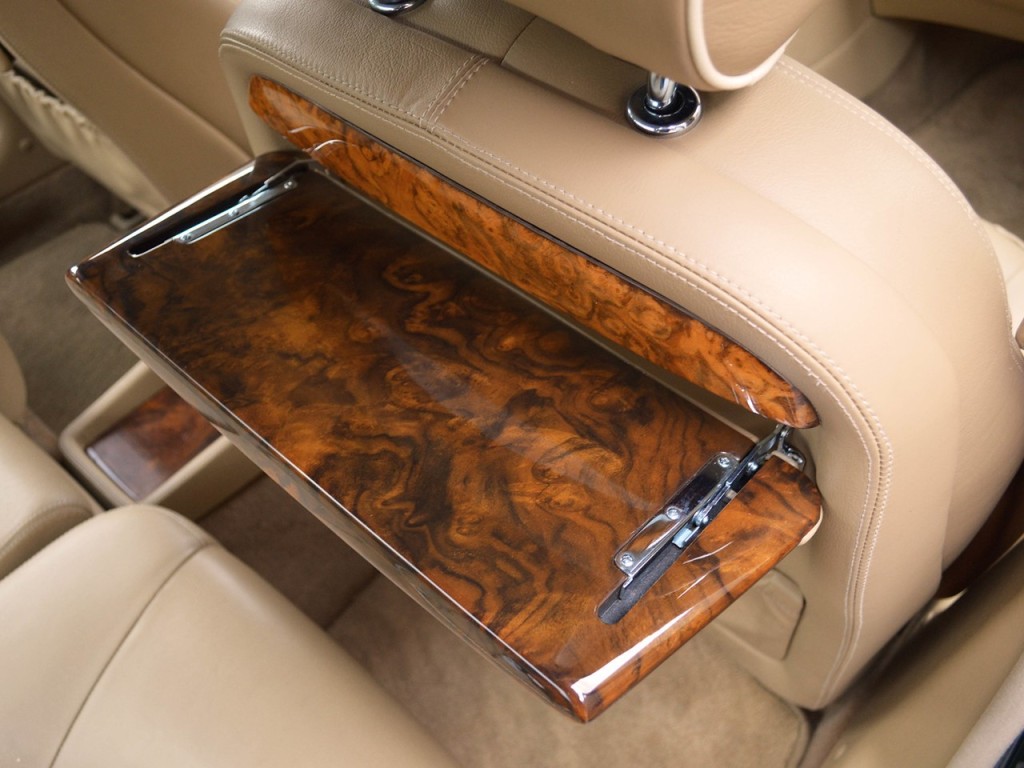 The ultimate embellishment of British hand-crafting is evident throughout. Here are four of the most comfortable seats in the automotive industry. The seating is more ergonomically designed with a body-hugging contour. The twin individual rear lounge seats are separated by a double storage console with armrest. Electrically adjustable front seats are ergonomically designed with manually adjustable head restraints. Jaguar automobiles has a long history of elegant styling and performance. Sir William Lyons view of the brand was synonymous with the old-world luxury of the British upper class. 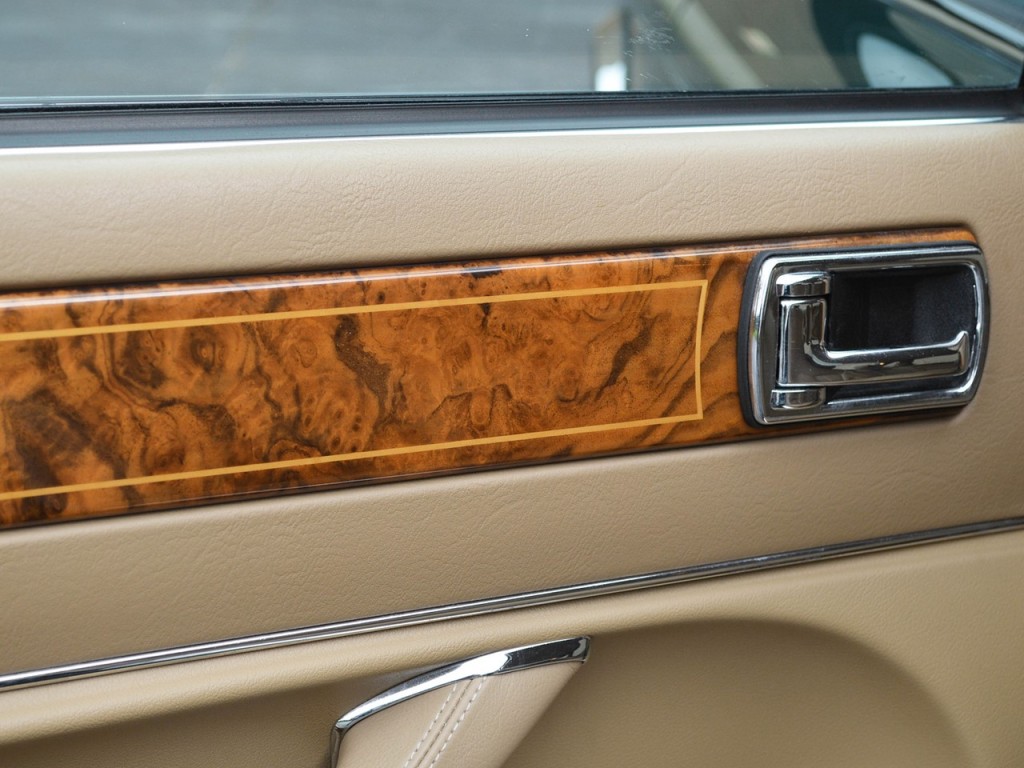 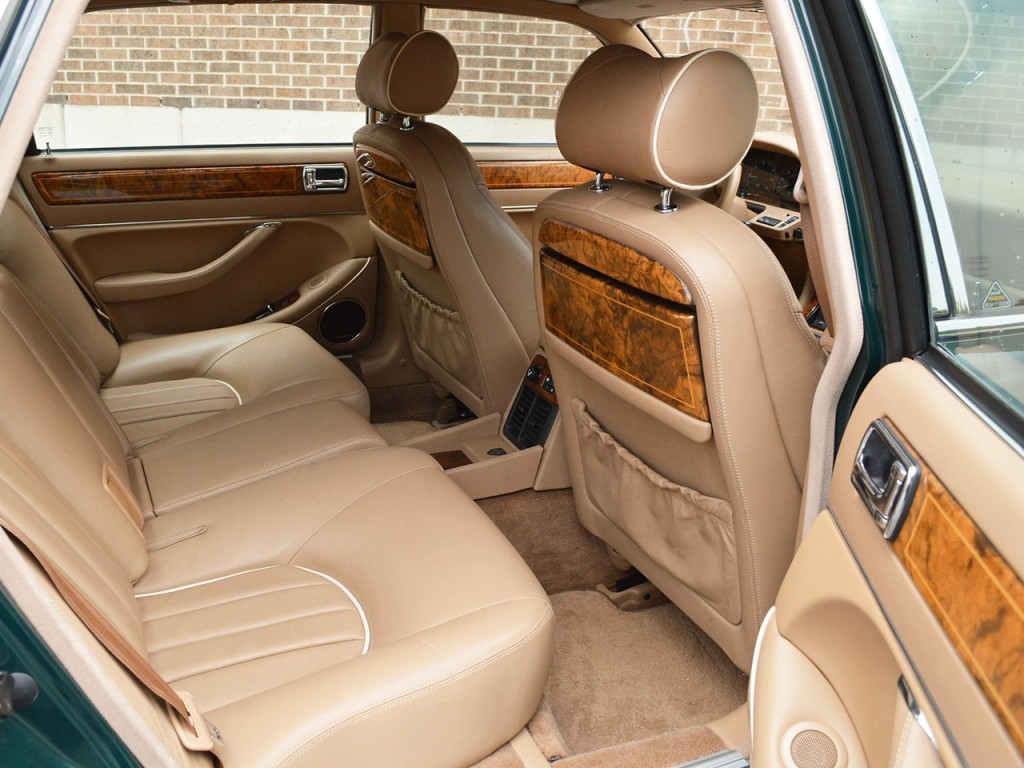 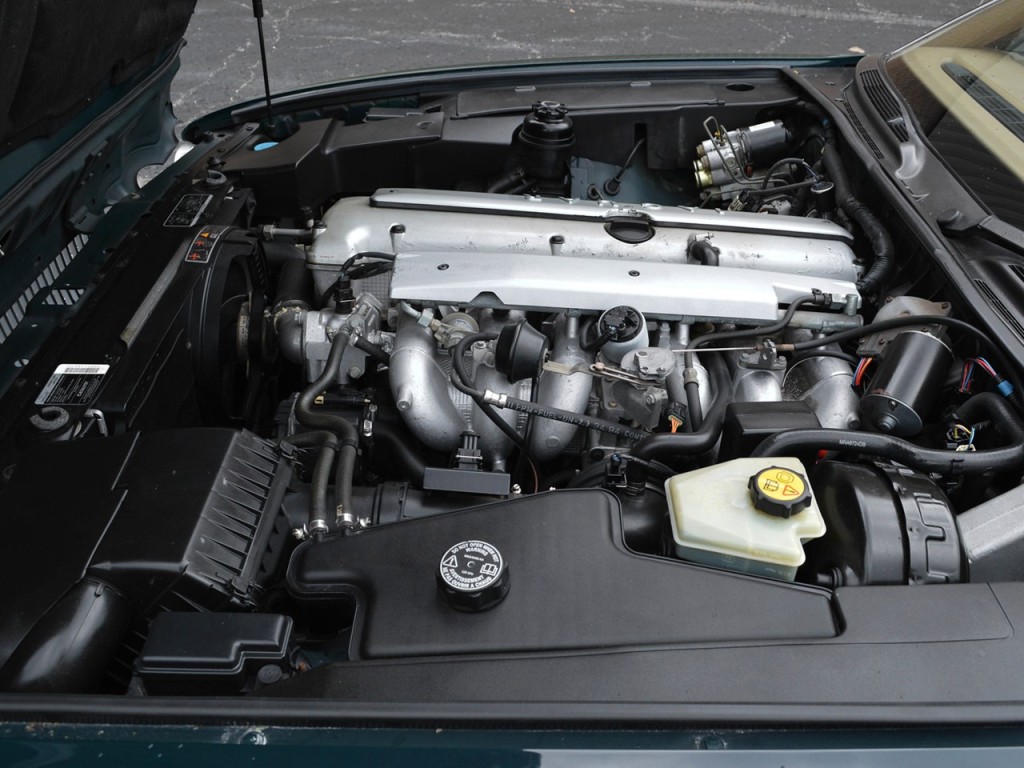 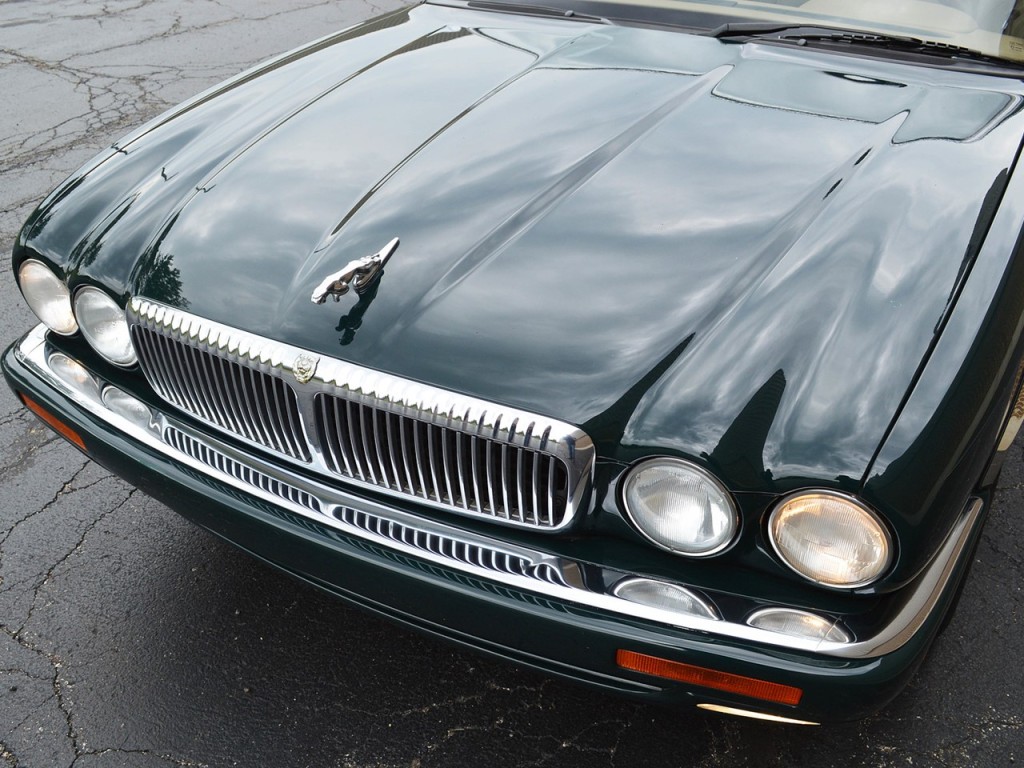 The “leaper” hood ornament is banned in some countries 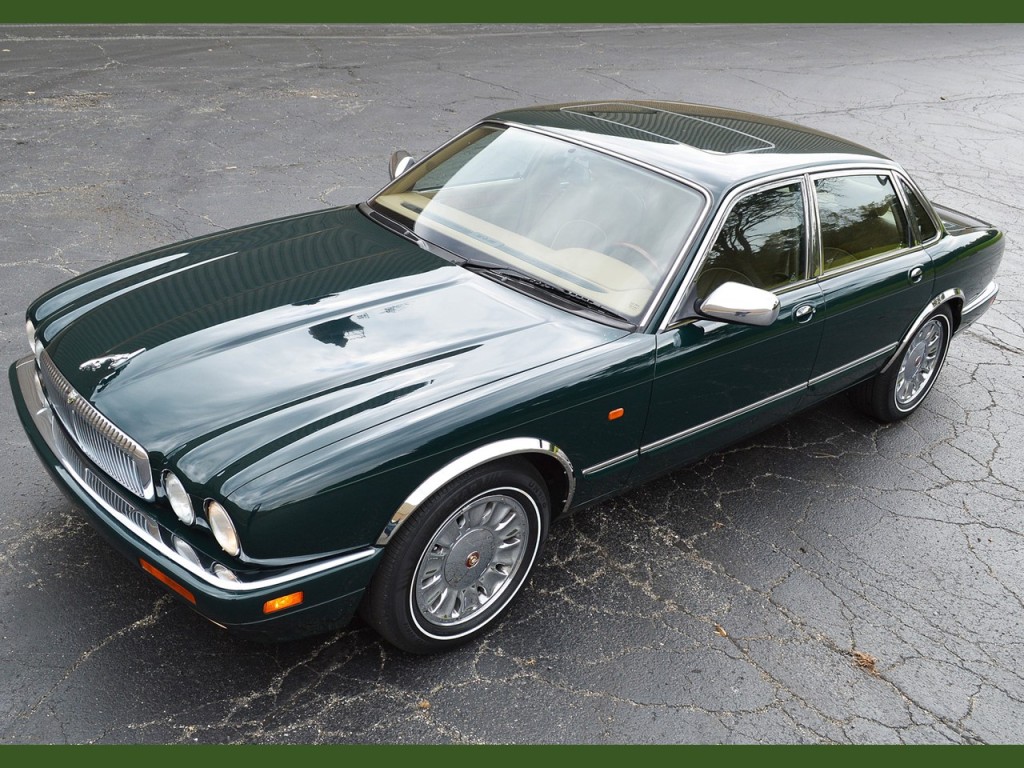 “Here kitty…here kitty-kitty.” It appears as docile as a domestic pet – but tap the accelerator pedal and it becomes as relentless as its namesake. The formidable Jaguar XJ6 Vanden Plas was a Flagship saloon that prowled North American markets. It is wild…as a she-cat tamed by the purr of a Jag-u-r…the beauty is there but a beast is in its heart – 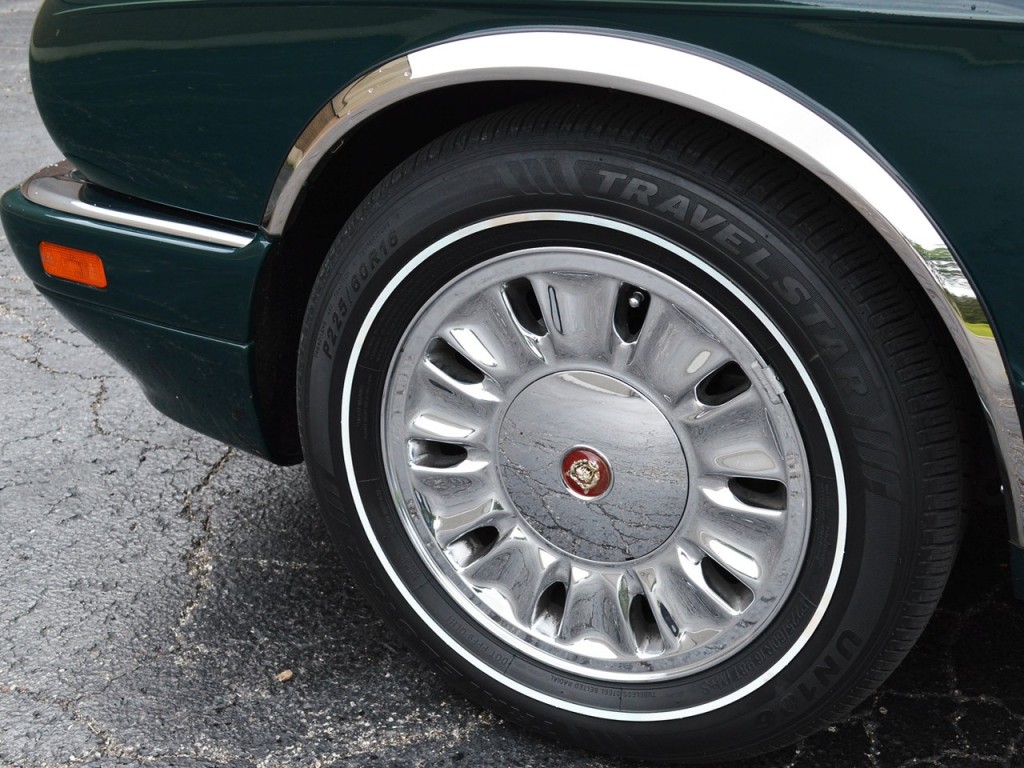 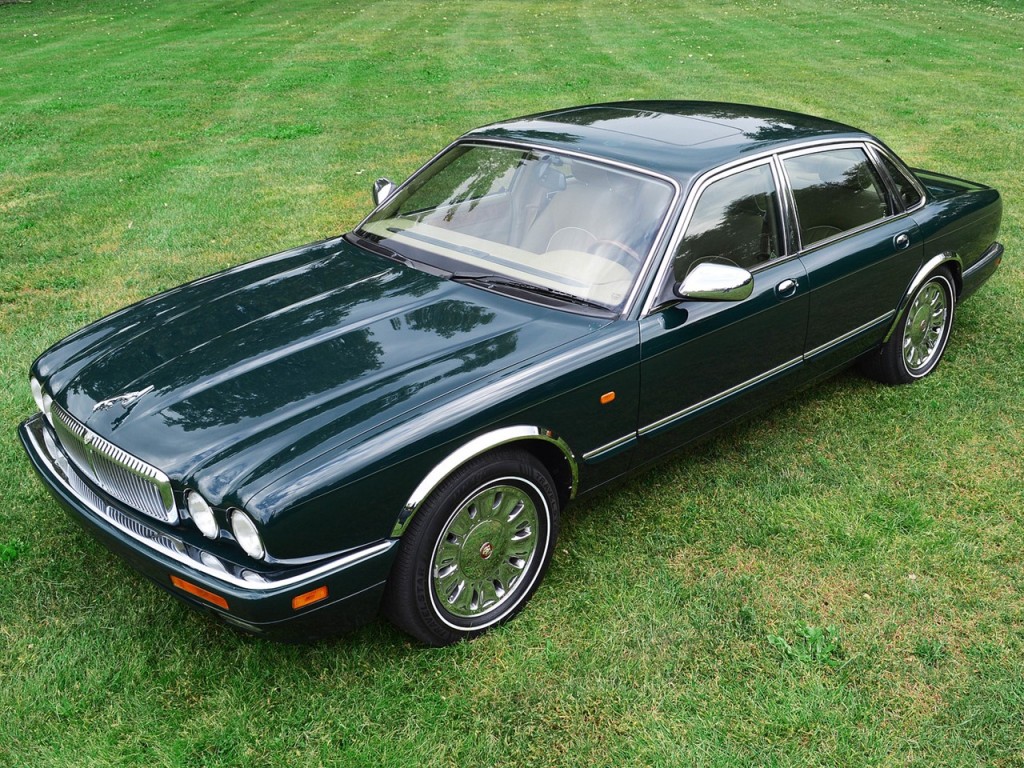