The next generation of the luxury car 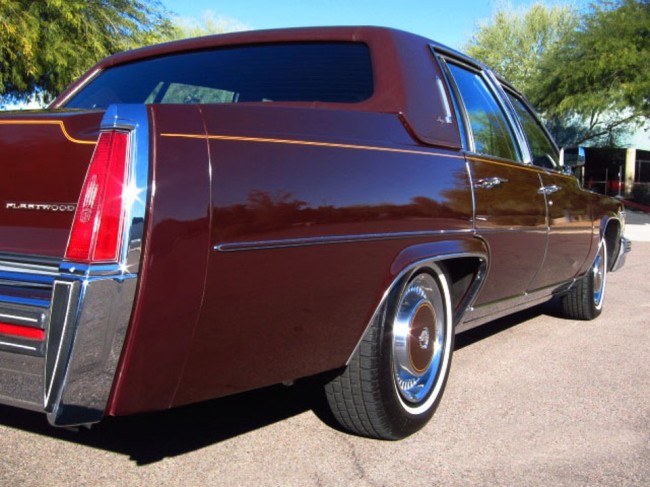 The continuing saga of “As the Standard of the World Turns” 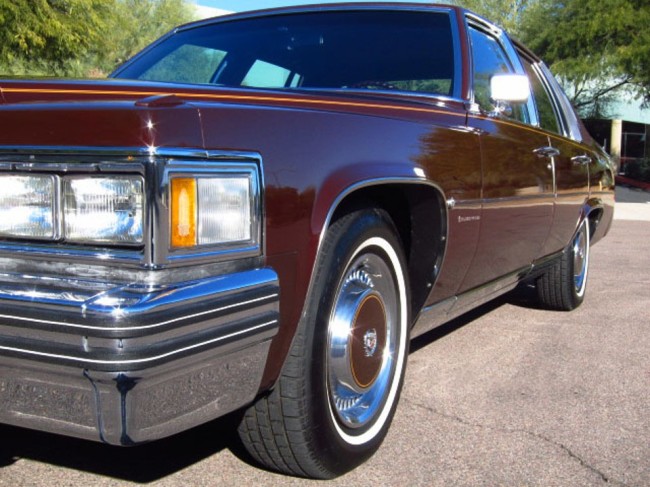 The next generation of the luxury car was introduced by Cadillac for the 1977 model year. Based on the 1975 Cadillac Seville, this new breed was designed for the contemporary changing world. While more compact in exterior design the 1977 Fleetwood Brougham retained the luxury and elegance of the luxurious 1976 Brougham. Making efficient use of space using computer technology, and lighter weight materials yielded major advancements in fuel economy.

A major engineering objective was to design the 1977 Cadillacs to reduce service complexity making it easier to service should it be required. The next generation of the luxury car was designed for today’s world and didn’t forget the reasons one purchased a Cadillac: elegance, performance and prestige. Cadillac celebrated their 75th Anniversary for 1977 with completely re-designed models. This contemporary expression of Cadillac luxury was a new view of the legendary motorcar in the continuing saga of…”As the Standard of the World Turns.”

The 1977 Fleetwood Brougham didn’t stint on comfort nor convenience. The 1977 interiors were redesigned for more efficient use of space. The luxurious interiors by Fleetwood included eleven color combinations of supple natural grain leather, or there were seven shades of Florentine velour or handsome Dover cloth in four colors to choose from. The Fleetwood touch was evident in the seat cushion sew-style as well as the tailored door panels. The standard folding center front and rear armrests added further distinction and comfort. The tradition continued the Brougham opulence for this all-new luxury sedan. 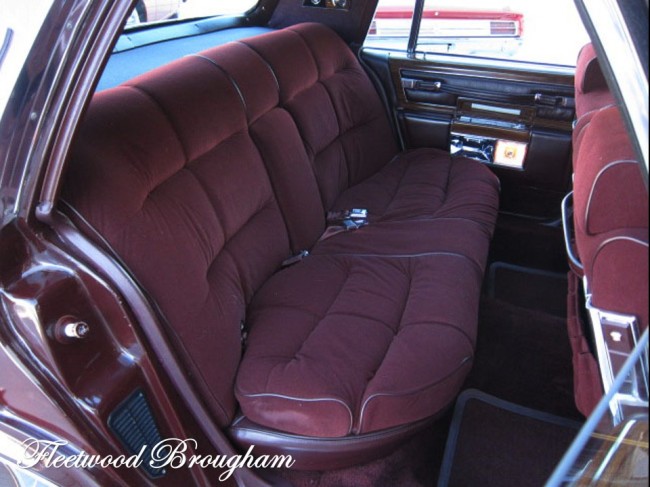 Gone was its body by Fleetwood, it now shared the same bodyshell and chassis as the 1977 Sedan deVille. The Brougham’s new contemporary bodywork was augmented by a distinctive roof treatment that differentiated it from the Sedan deVille. The Fleetwood Brougham was always a luxury sedan of elegant refinement. 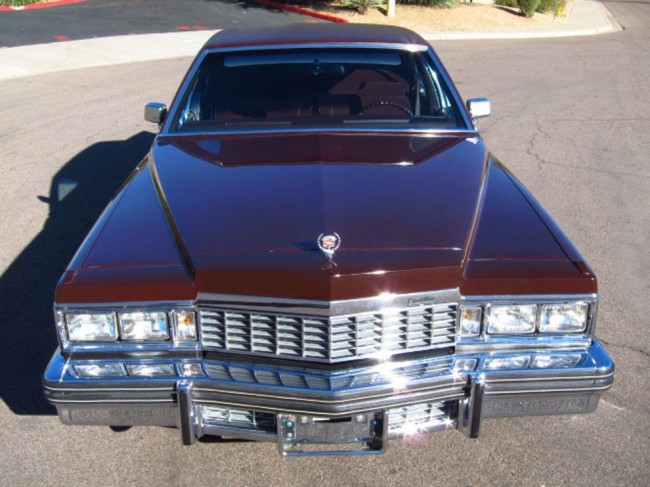 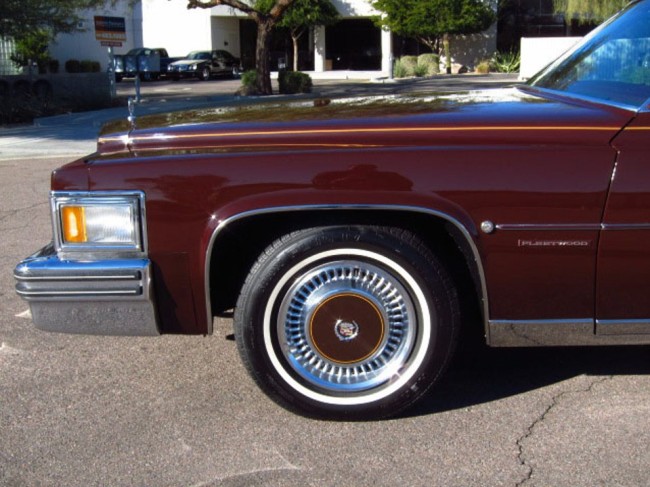 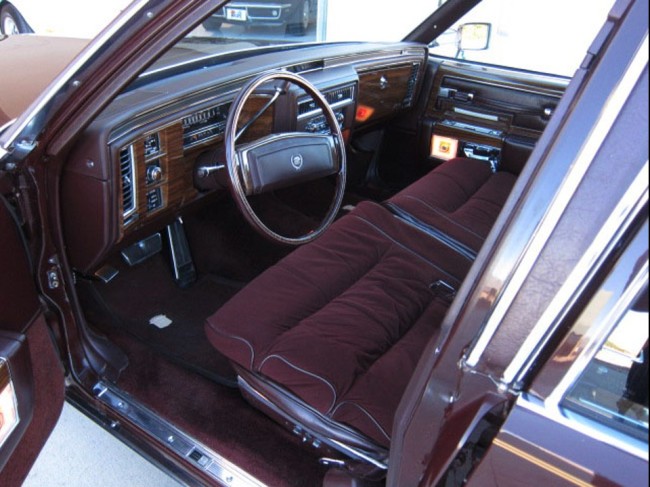 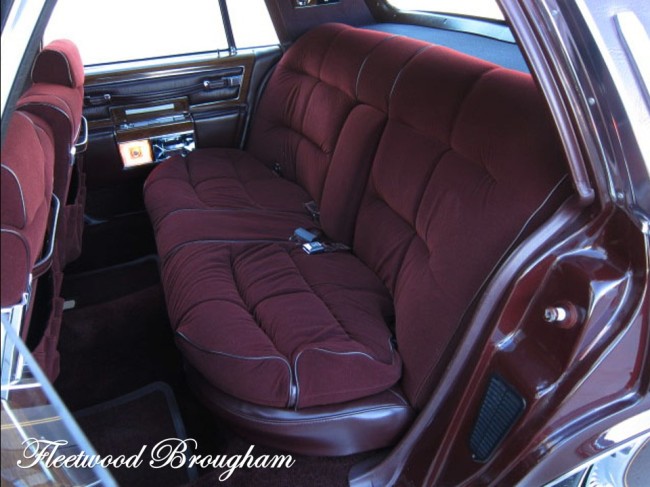 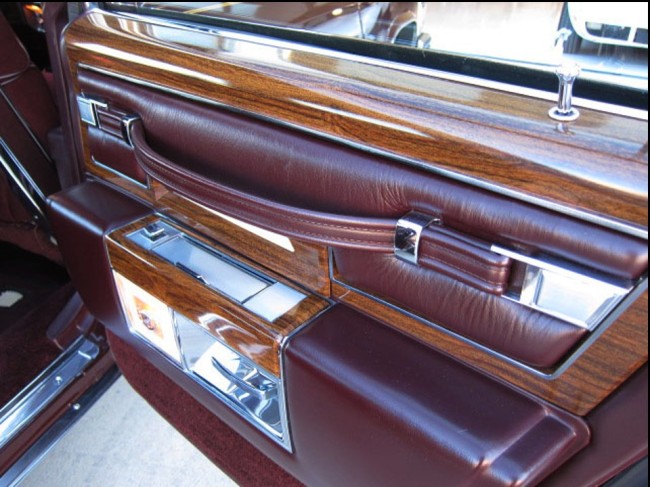 The completely re-designed 1977 Fleetwood Brougham is a large front engine rear drive luxury sedan. It is built as body on frame construction using Cadillac’s ladder type frame with welded crossmembers. It rides on a long 121.5” wheelbase, has the luxury length of 221.2” and is 76.4” wide. The front suspension uses upper and lower control arms, independent coil springs, link-type stabilizer bar and hydraulic direct action shock absorbers. The rear suspension is set-up for the Automatic Level Control network. It uses Cadillac’s four-link drive, coil springs, and dampers designed for the height control.  It also has a hypoid type rear axle with propeller shaft using two constant velocity joints for the front and rear. 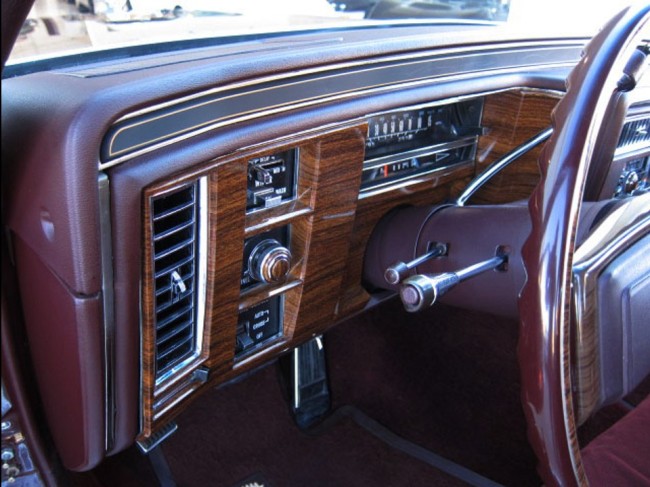 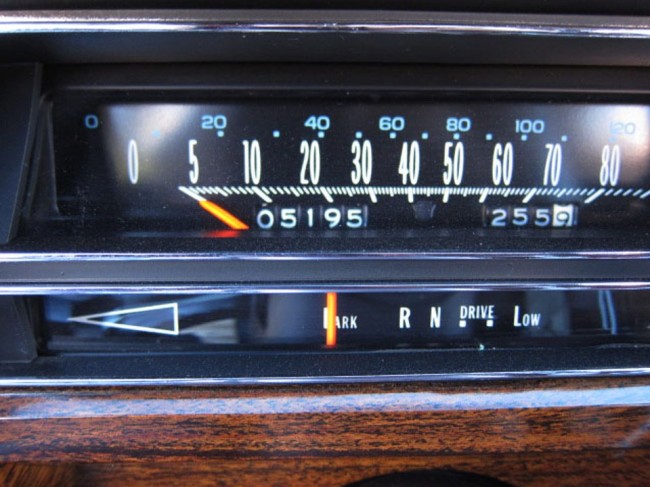 Cadillac’s triple-braking system is standard. It’s equipped with a power hydraulic dual master cylinder with separate fluid reservoirs for independent operation of front and rear brake systems. The 1977 Fleetwood Brougham has four-wheel ventilated disc brakes with a self-adjusting feature. It is equipped with a tandem vacuum power booster and single piston sliding calipers front and rear. The parking brake has silent action with a vacuum release. It is a true auxiliary brake since it will not lock with the engine running and car in gear. This highly sophisticated braking system provides smooth, fade-free operation. 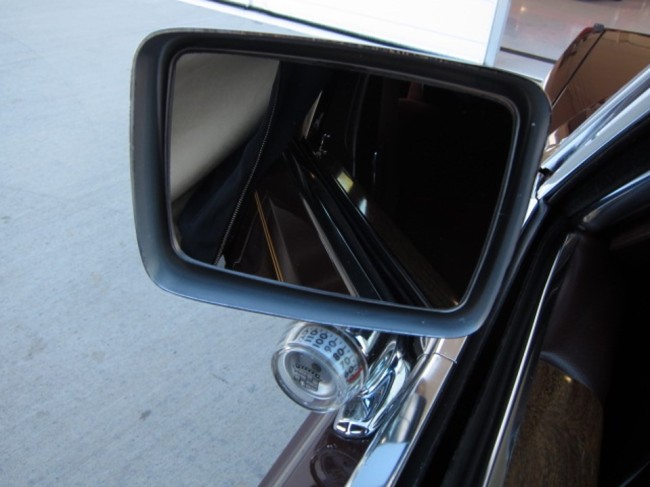 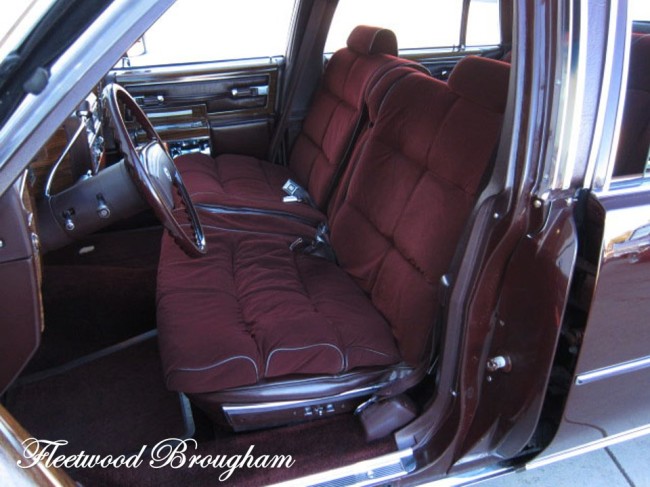 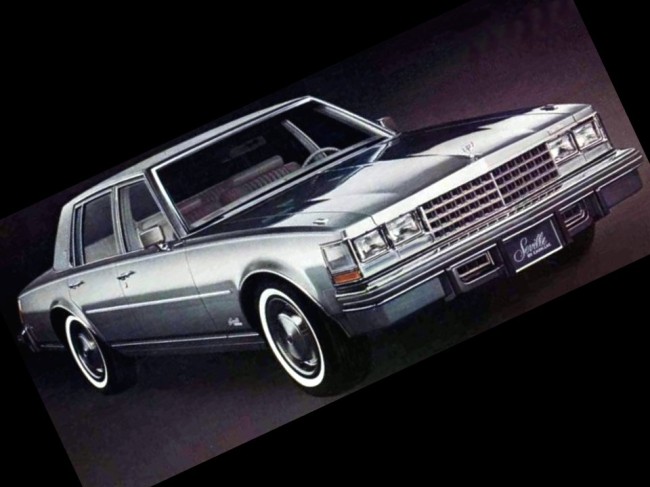 It is the Cadillac Seville that inspired the next generation of the luxury car. Cadillac had to re-design their offerings to compete in the contemporary market. There were several deciding factors for a smaller, trimmer, more fuel efficient Cadillac. The 1973 Arab Oil Embargo set the stage which created havoc in the US with gasoline shortages, long lines at the stations with fuel, and the rising cost of crude oil.

The EPA mandated Corporate Average Fuel Economy or CAFÉ standards could not be ignored either or GM would have faced unpleasant consequences. The Seville was introduced in 1975 as a 1976 model. It was based on a modified Chevy Nova platform and used an Oldsmobile 5.7 litre 350 CID engine. The Seville introduced a new “international-sized” luxury sedan…it was clean and compact. The Seville proved through efficient use of space and lighter weight materials that a luxury car could obtain optimum gasoline mileage. The European inspired styling was a refreshing new view of Cadillac luxury. 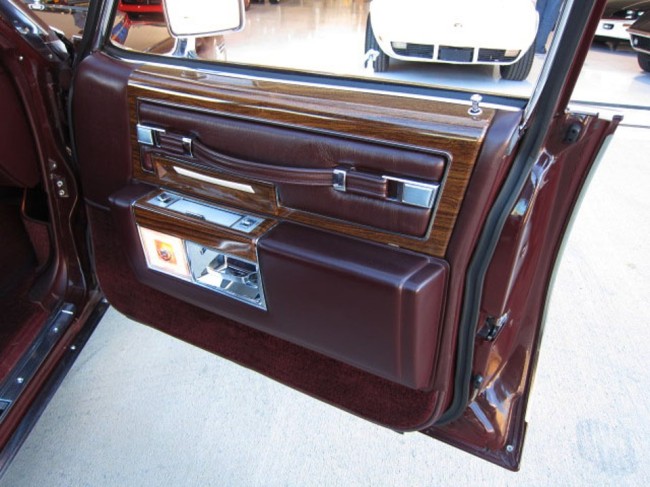 It is the Cadillac Seville that initiated a new era of Cadillac luxury. The Seville’s styling was so popular it spawned a decade of clones from various automakers. General Motors over-did the design with ALL of its divisions, sharing most of the Seville’s styling cues. Yes, it was the trusty Cadillac Seville that ushered in the “bad-taste” era that spanned an entire decade in the 1980s. 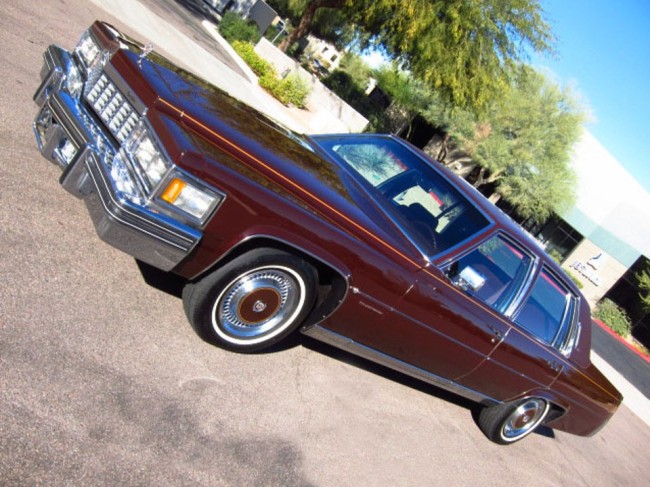 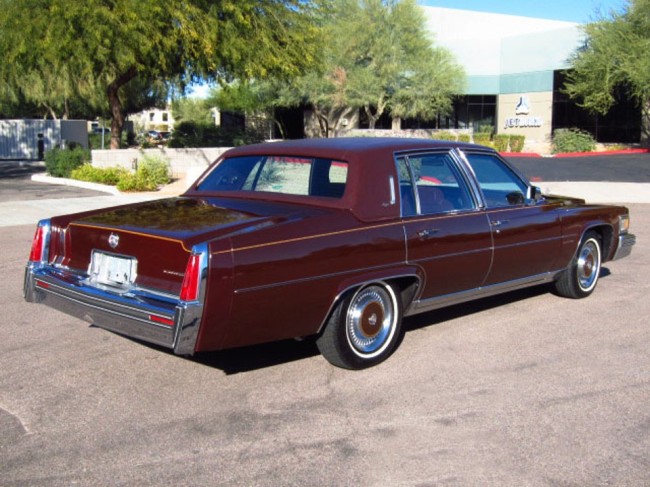 Cadillac was the only luxury brand that could re-design its offerings so drastically yet manage to set new sales records. The luxury car buyers appreciated Cadillac’s trimmer, more efficient models…especially at the fuel pumps. The 1977 Fleetwood Brougham production totaled 28,000 vs the 234,171 DeVille production total. The 1977 Fleetwood Brougham was base priced at $11,546. Try to locate a brand new luxury sedan today for that price!

Cadillac reinvented the luxury car for the 1977 model year. They are completely re-engineered from the ground up. They have a completely new bodyshell, chassis, and engine. The all-new Cadillac 7.0 litre V8 engine more than adequately powers this new breed. The 1977 Fleetwood Brougham has clean, sculpted, sensible styling right for the changing times. It is designed for more efficient use of space.

The Fleetwood Brougham is trimmer on the outside but retains its spacious six passenger comfort. It was an immediate success breaking the 1976 sales production totals. In total value, comfort, convenience and luxury with prestige, the 1977 Fleetwood Brougham is truly one of the world’s great sedans. The 1977 Cadillac Fleetwood is another superlative superlative…in the continuing saga of “As the Standard of the World Turns.” 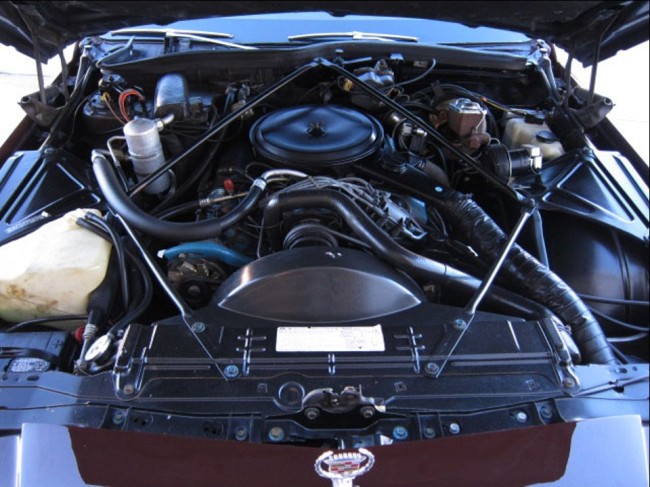 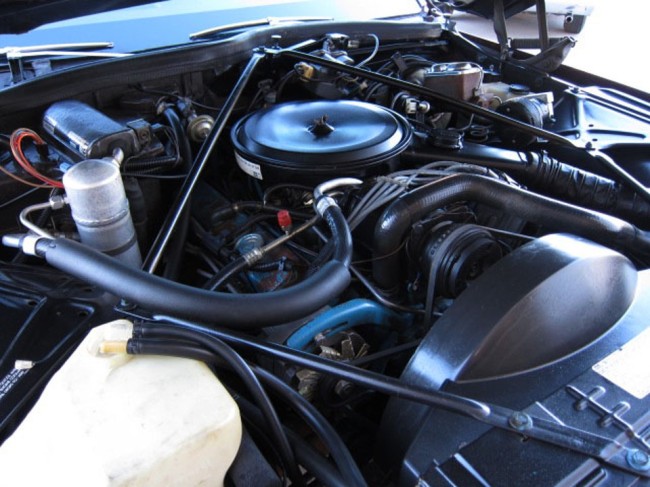 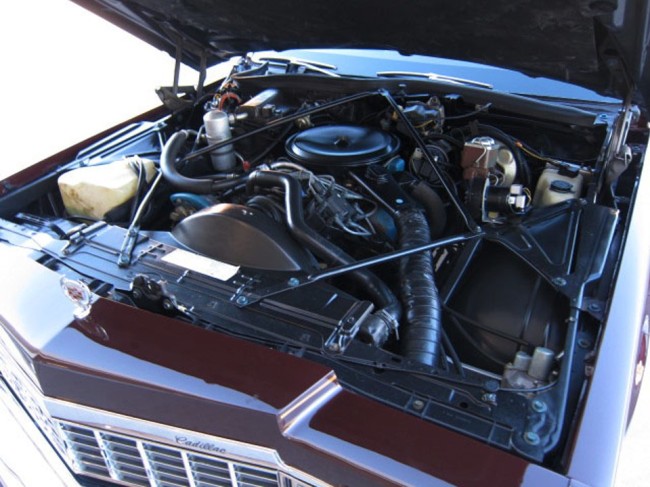 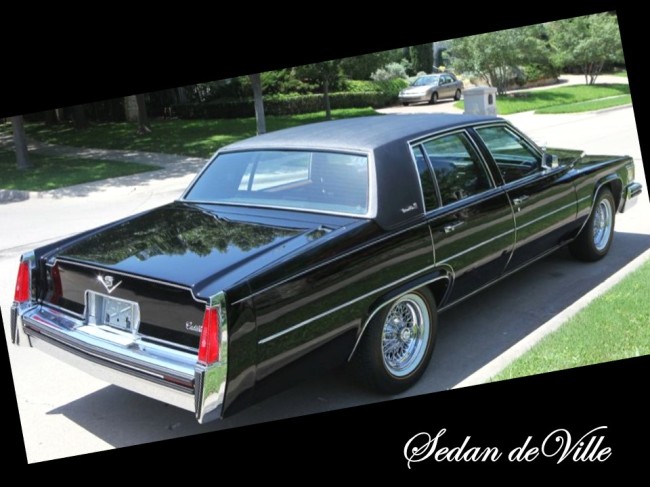 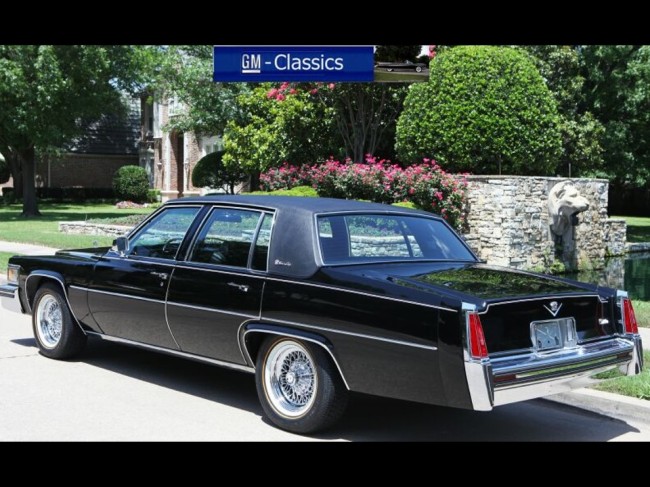 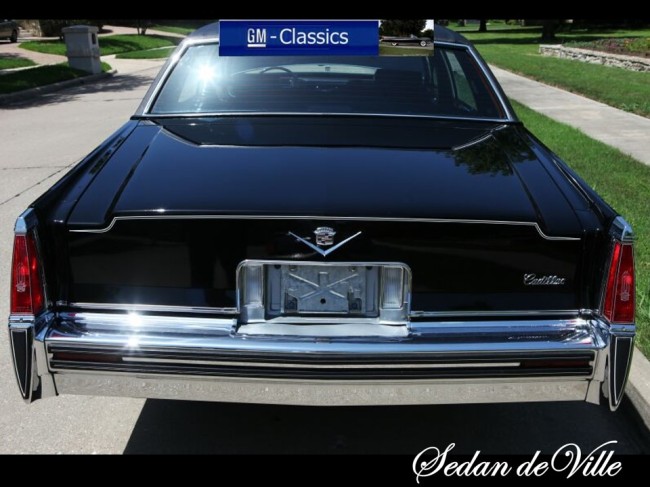 The 1977 Cadillacs are the next generation of the luxury car

One thought on “1977 Cadillac Fleetwood Brougham” Leave a comment ›