The new kid on the block… 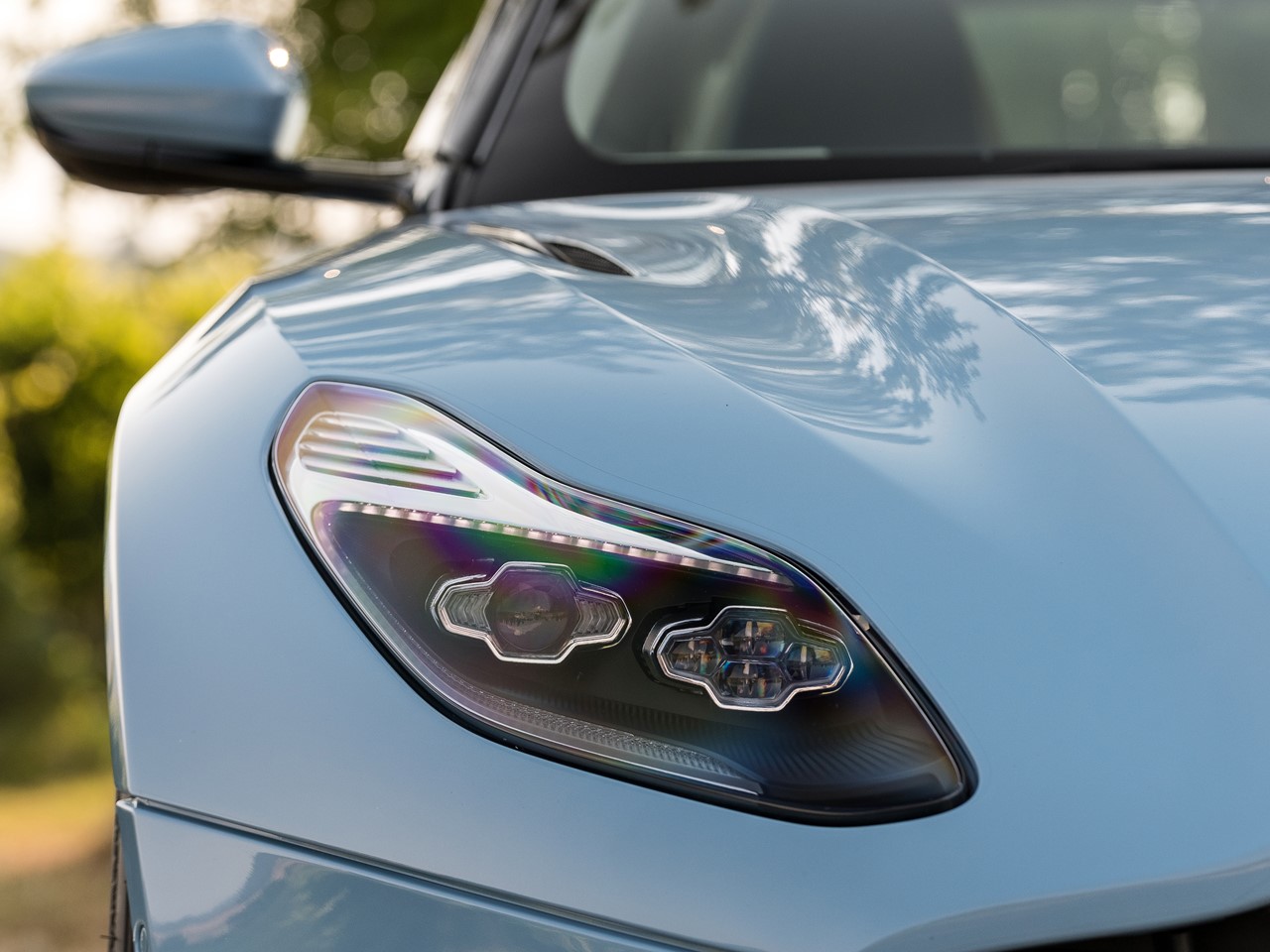 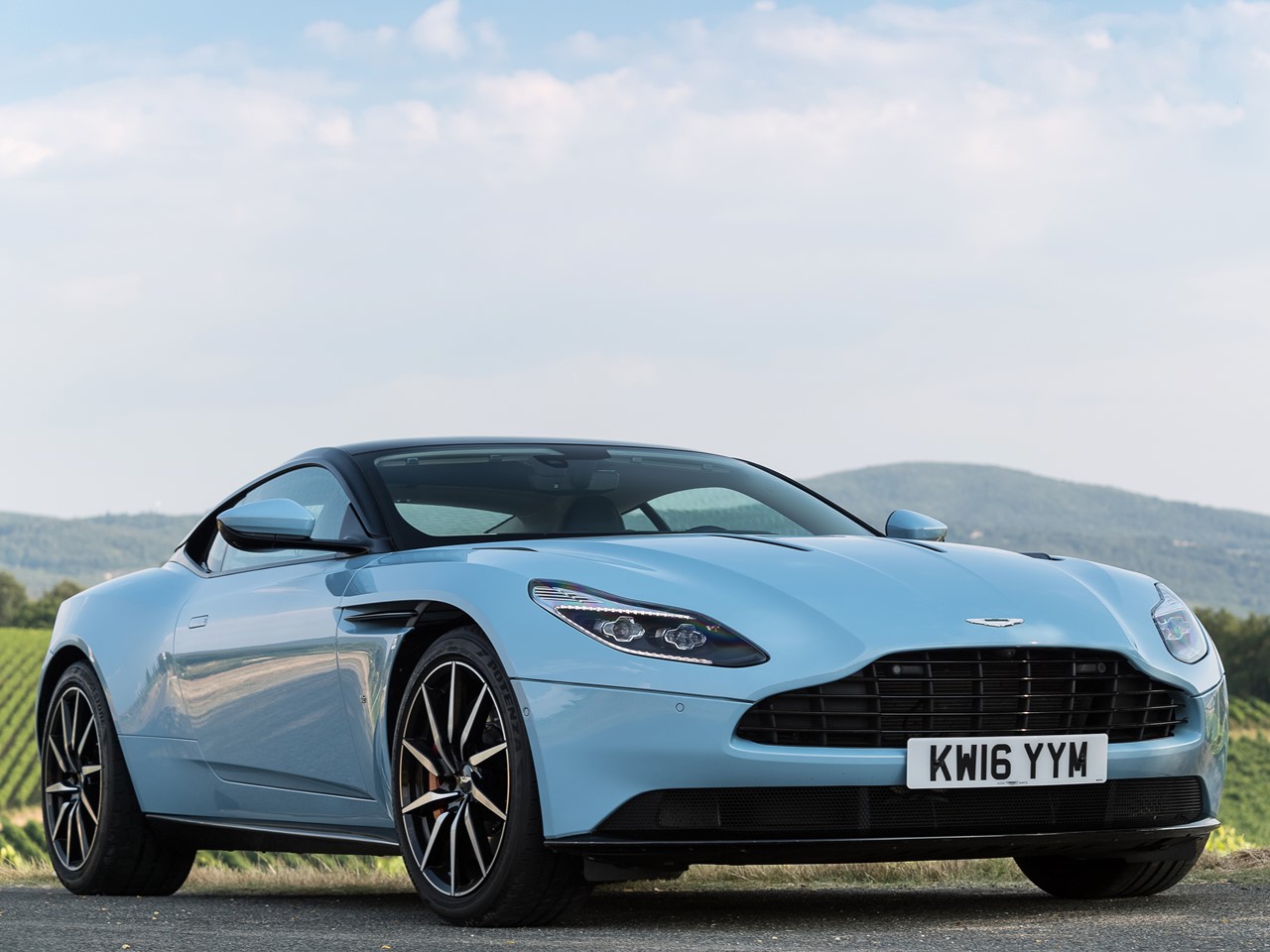 Aston Martin has set forth benchmarks of what a car in its class should be. It has never deviated from this premise. Aston Martin adheres to strict personal conviction and has achieved a high standard of individualism and a persona that in itself has become a standard for other motorcars. It has successfully combined and synthesized luxury with magnificent performance. The formidable DB series established the high performance racing image for the brand. One of the most famous models is the Aston Martin DB5 driven by the fictional sleuth James Bond.

The Aston Martin DB legacy continues with the 2017 DB11 clothed in sleek, athletic, aerodynamic architecture. The spirited new design follows Aston Martin styling continuity. It has already earned obsequious flattery world-wide. The Aston Martin team of dedicated enthusiasts collaborated once again to bring forth one of the most ambitious projects ever in automotive design. Aston Martin is a posh supercar for those who demand fervent individuality. Welcome to the power, beauty, and soul of the latest edition in the continuing saga of the elite DB marque of excellence. 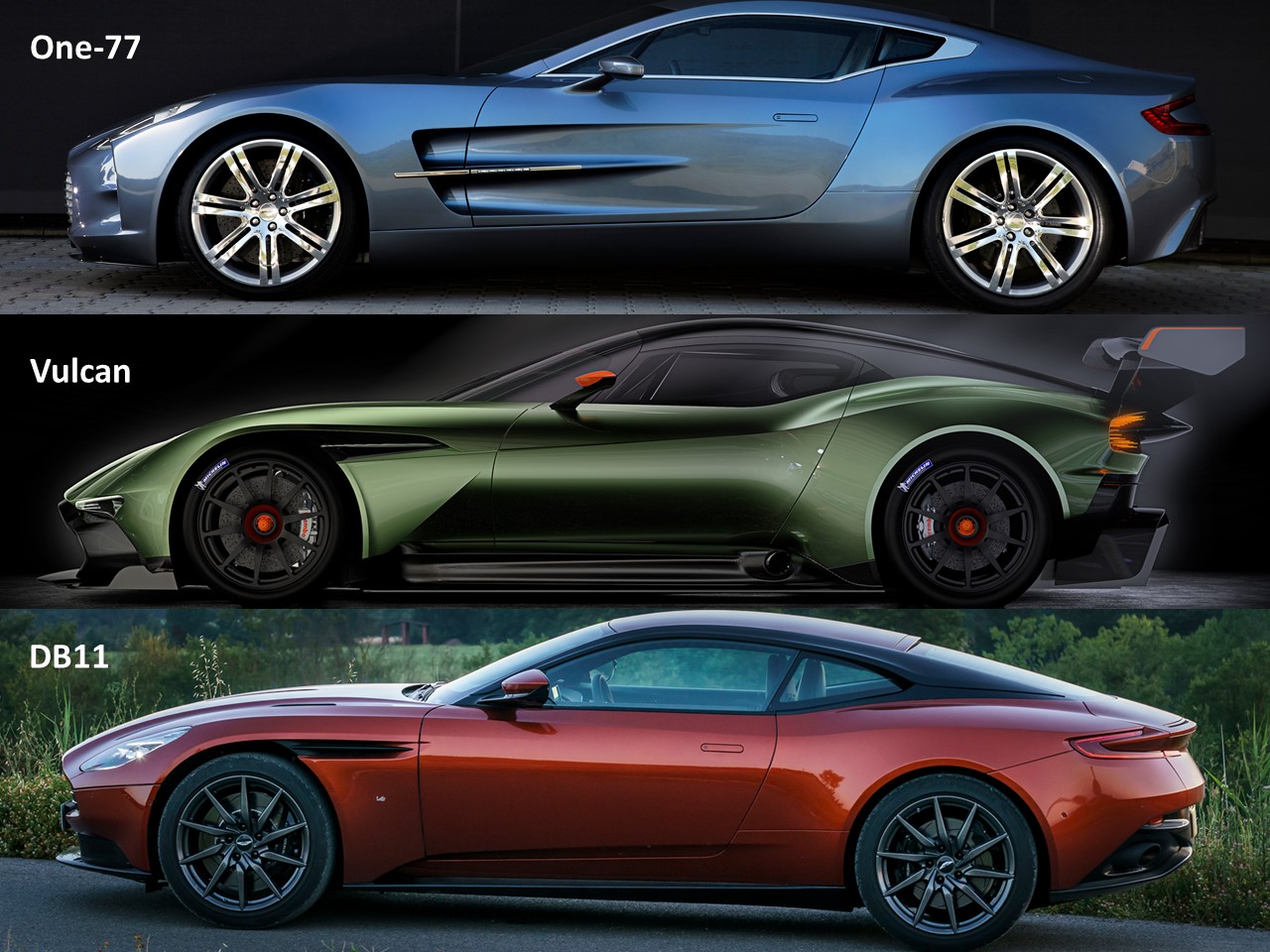 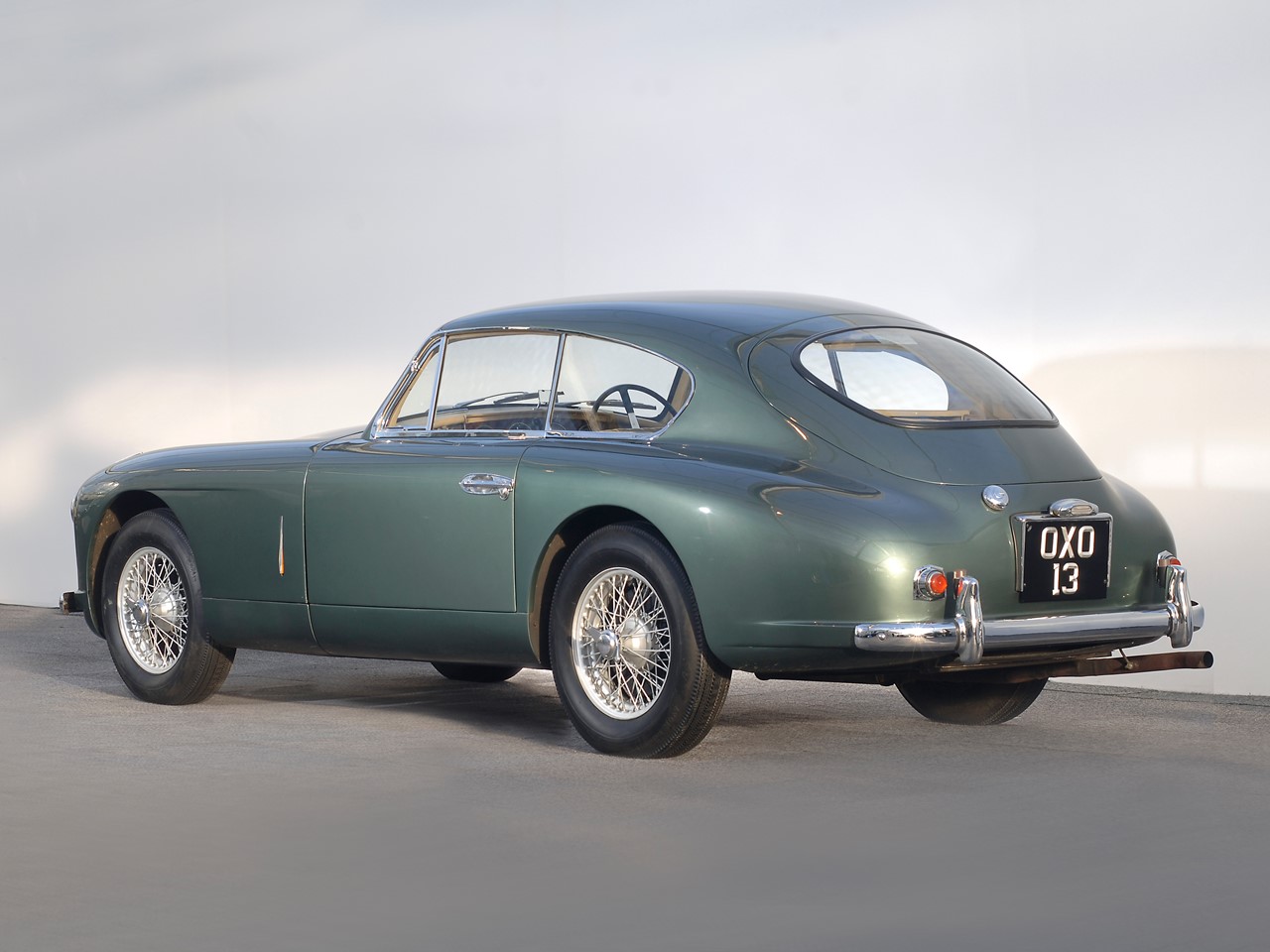 A bit of history…

The fast and ferociously powerful Aston Martin DB Series began its iconic existence as a prolific ingénue under the tutelage of the managing director Sir David Brown. He saved the company from financial ruin right after WWII.

The Aston Martin DB series established the brand’s racing pedigree. The DB4 and DB5 introduced Aston Martin’s grand touring eloquence, thus…its formidable identity developed and became etched into the minds of connoisseurs. It continually emerged as a world-class thoroughbred through evolution. Each subsequent DB is a masterpiece built upon the previous model’s finesse which raises the bar of success in the automotive industry to an even higher degree – 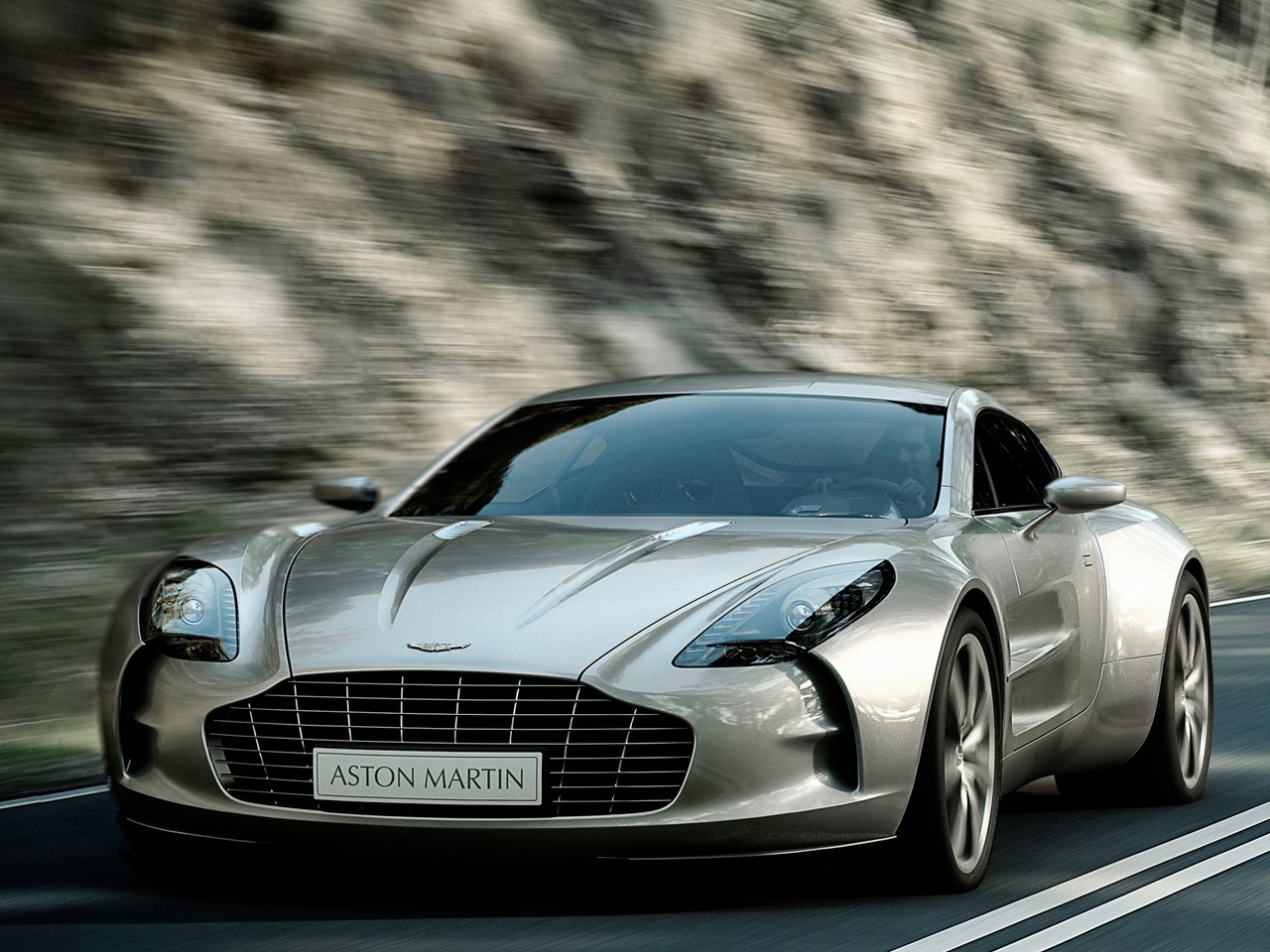 Beauty is more than skin deep…

Aston Martin has acquired the status of building the world’s most beautiful automobiles…repeatedly. If seduction could manifest itself as an automobile…the Aston Martin DB11 is it. If you look deeply into its styling, the design features hint at the epochal Aston Martin One-77 which is the epitome of automotive design and was built at a highly restricted pace of only 77 vehicles.

The most significant aspects of the DB11’s design maximizes its aerodynamic efficiency. The bonded aluminium structure has a weight reduction to offset the new V12 engine’s heavier mass. Its dramatic new design is augmented by Aston Martin’s “Curlicue” and “Aeroblade” systems.

Familiarize yourself with these two words because you will be hearing a lot more about them in the near future. These principles are so innovative that Aston Martin has patents for them. These features made the rest of the automotive industry “nervous” leaving them scrambling back to the drawing board just to catch up. 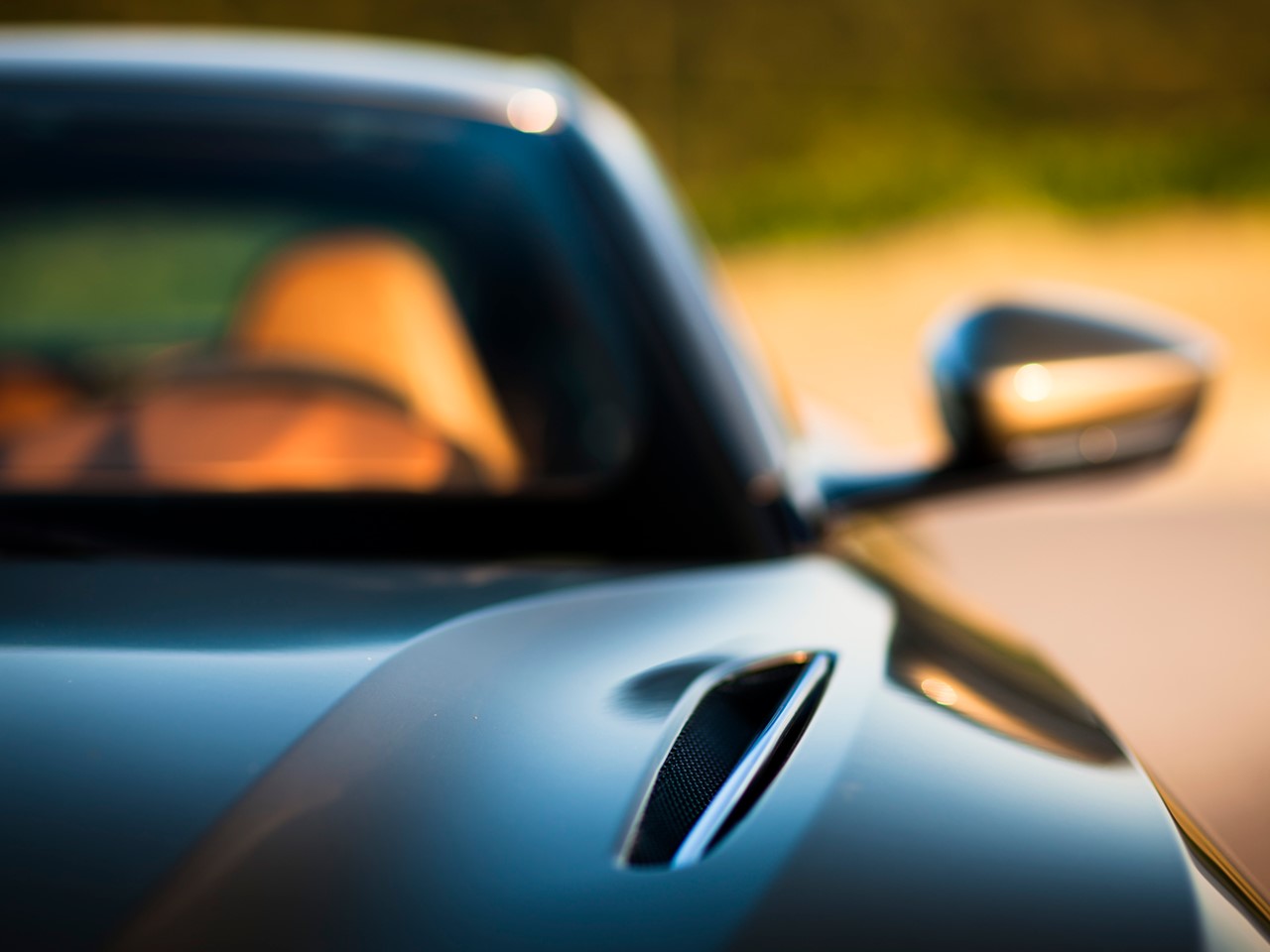 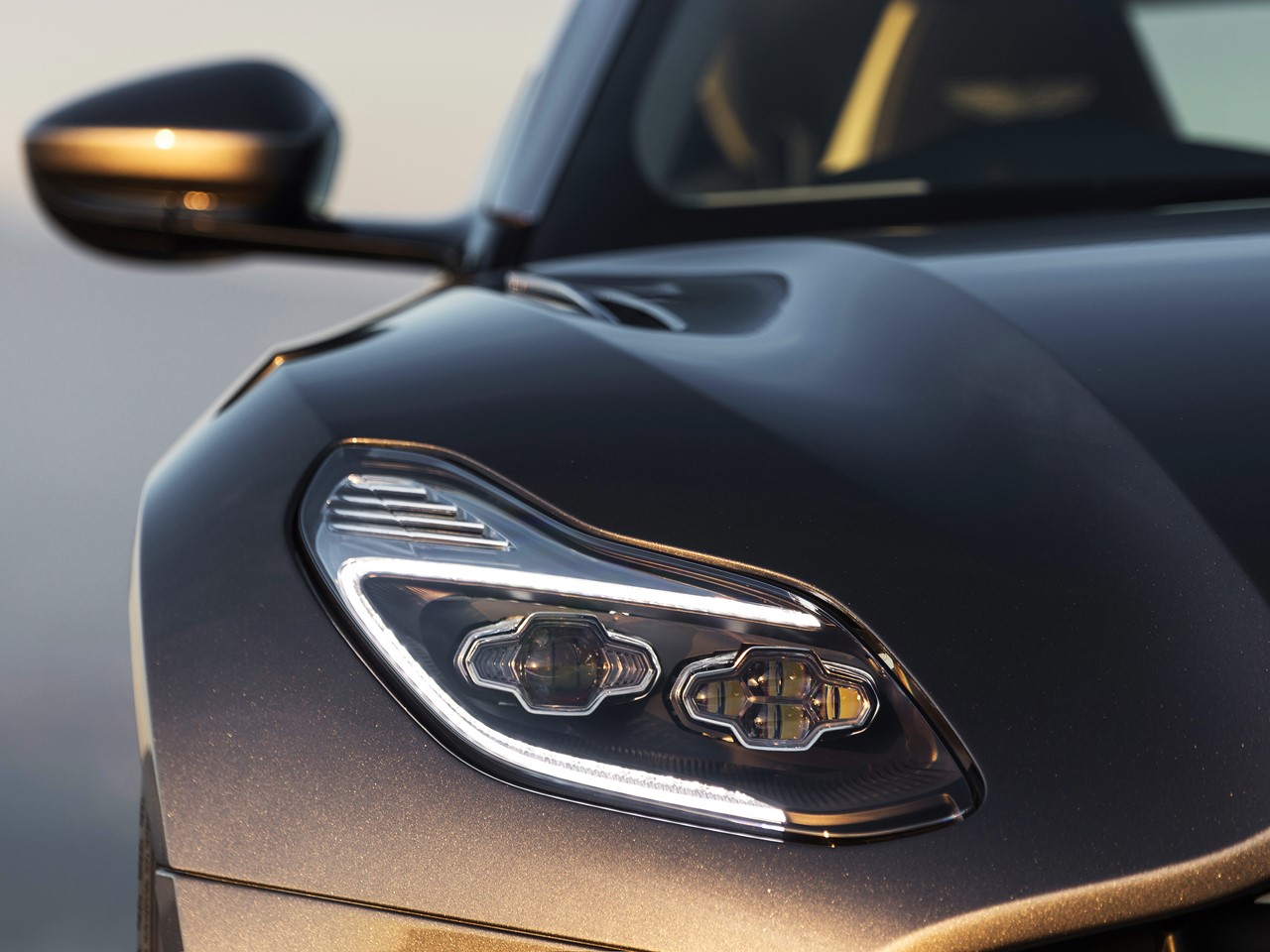 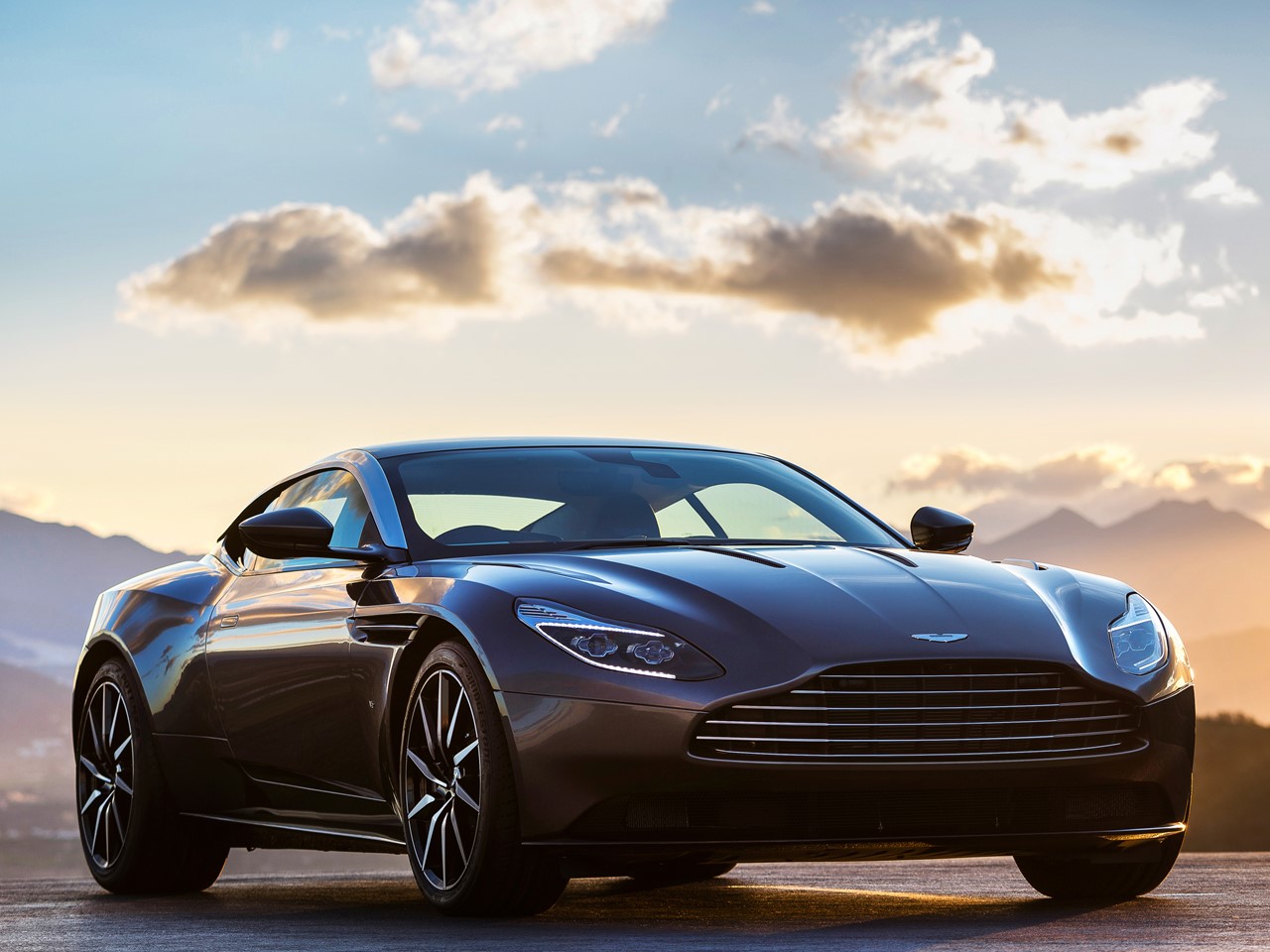 Every beautiful square inch of the architecture has purpose. The DB11 is designed to cleave the air efficiently. An automobile must manage the air flow from nose to tail to effectively maintain stability while maximizing downforce. The DB11 uses its architecture to master its dynamics to “ride like the wind.” Instead of fighting the turbulence and wind resistance around the vehicle…the Curlicue and Aeroblade systems ingeniously works with these elements.

From the dramatic new roof strakes to its concealed aerodynamic defense system, the Aston Martin DB11 is a grand tourer for today’s world. Fancy grille-like vents are incorporated into each front fender’s wheel arch lining. These apertures are known as “Curlicue” and are integrated into the car’s aerodynamic network to reduce front-end lift.

High pressure air from the top of the front wheel arches are vented through recessed apertures behind the iconic Aston Martin styling side strakes. More high pressure air is extracted from the rear of each wheel arch through stirrup vents positioned aft of the front wheels. This intricate airflow system was developed for Aston Martin’s racing division. 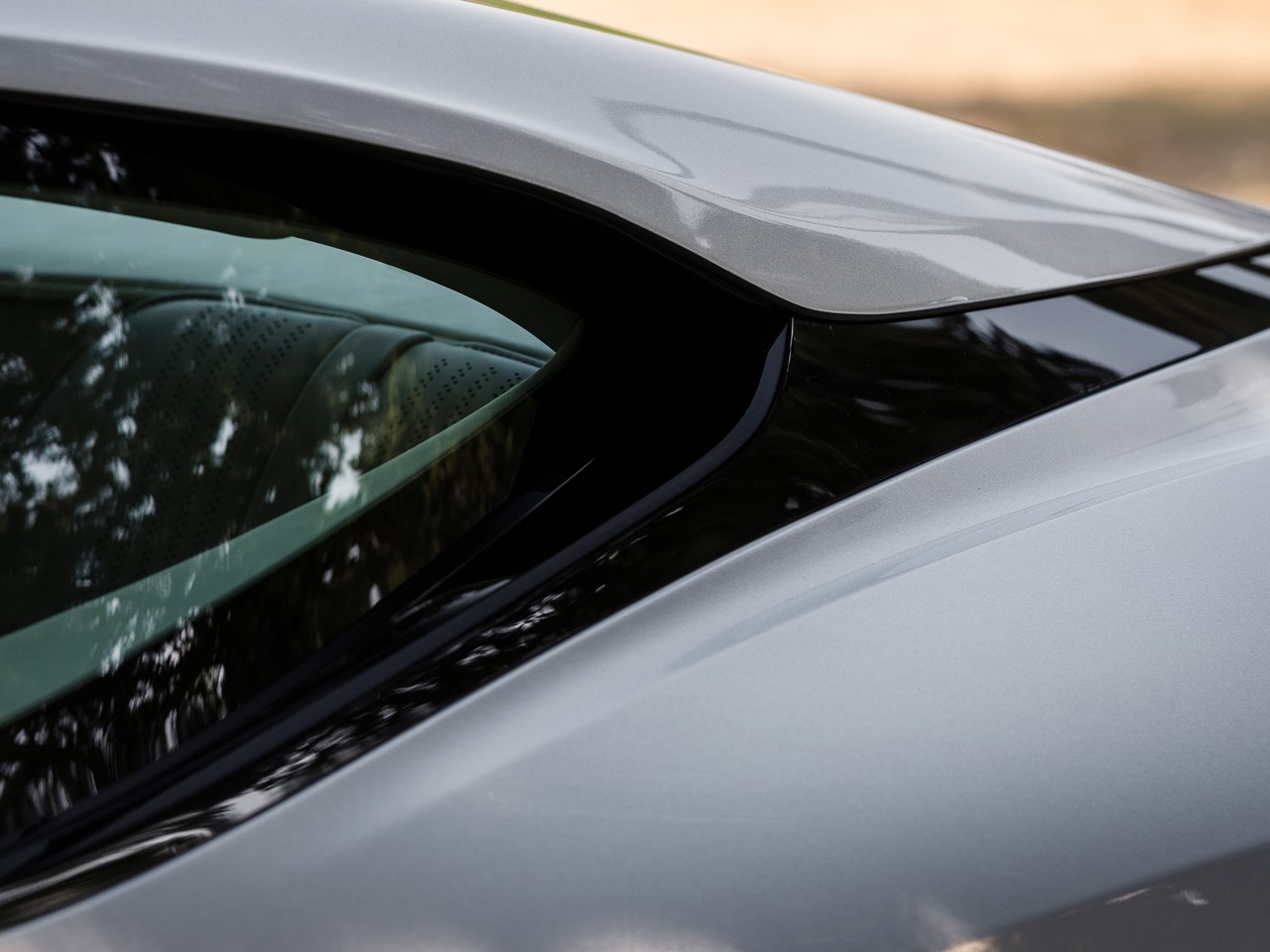 DB11’s aerodynamic form follows function. Low, sleek, chiseled flowing lines from the aggressive front end ensemble sweep back to be intercepted by the familiar wide muscular haunches at the rear. The “Aeroblade” system harnesses airflow along the vehicle’s flanks enhancing stability at the rear.

Air intake duct-work located in the base of the “C-pillars” draw airflow within the architecture before extracting it from slots in the rear bootlid. This system works like a conventional spoiler directing the jet of disrupted air reducing lift and maximizing downforce. This eliminates the need for a rear wing. When extra stability is required a small active spoiler automatically deploys from the bootlid. When it is no longer needed, it retracts back into the bootlid. 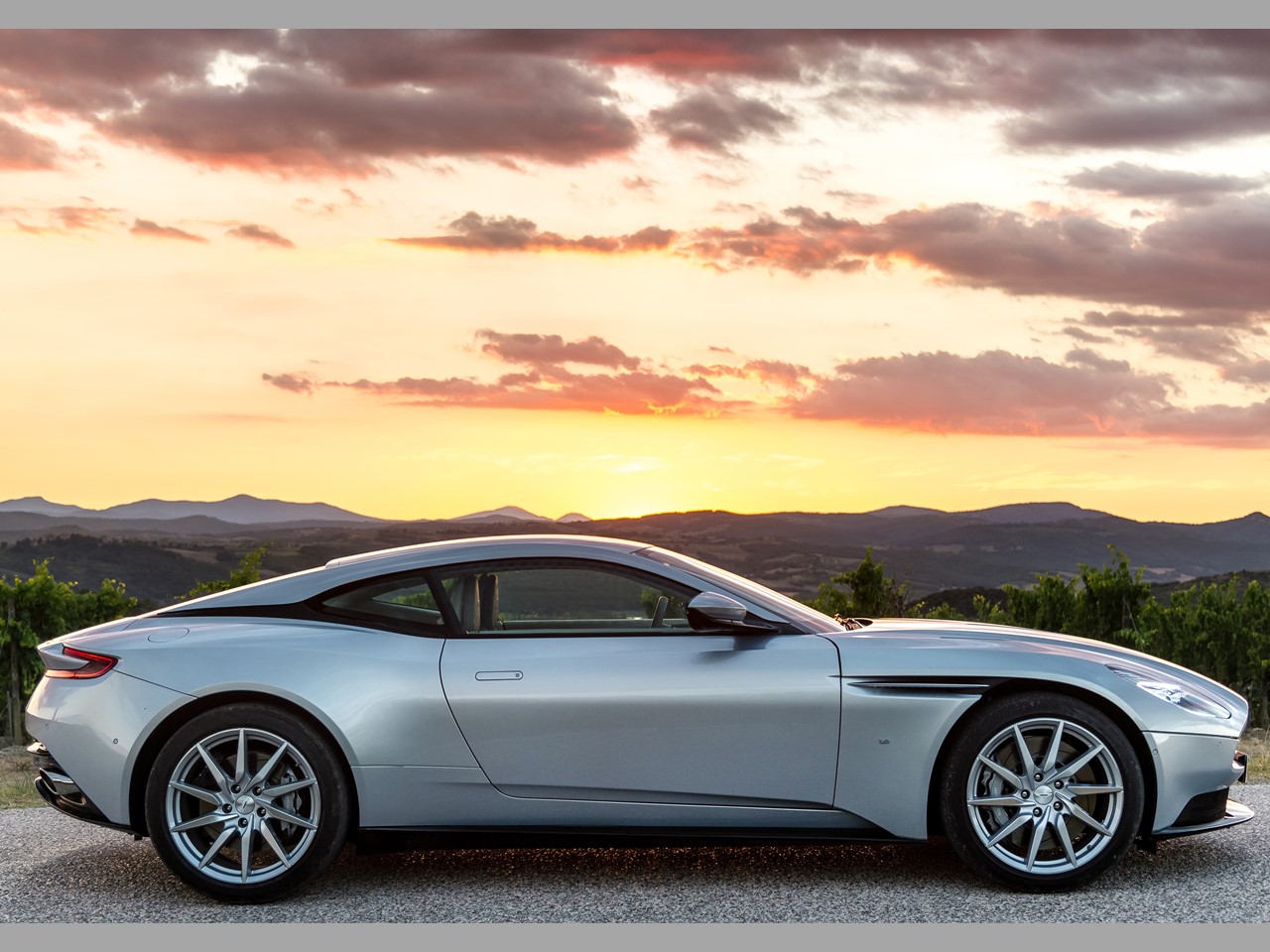 The DB11 exemplifies the Aston Martin tradition of aesthetic design. Its striking new beauty is refined and elegant. The front end design is highlighted by the signature grille which has been moderately refreshed. All-new LED headlamps adds a distinctive contemporary flair.

The clamshell bonnet is designed with an exclusive wrap-around form to minimize unsightly shut lines. It’s hinged forward to showcase the formidable V12 engine.The DB11’s styling is ‘pedestrian friendly’ as with all Aston Martin motorcars. DB11’s specs are 1.2” longer, 0.3” higher, with a 2.5” longer wheelbase than the DB9. The silhouette may be new, but it’s unmistakably Aston Martin. 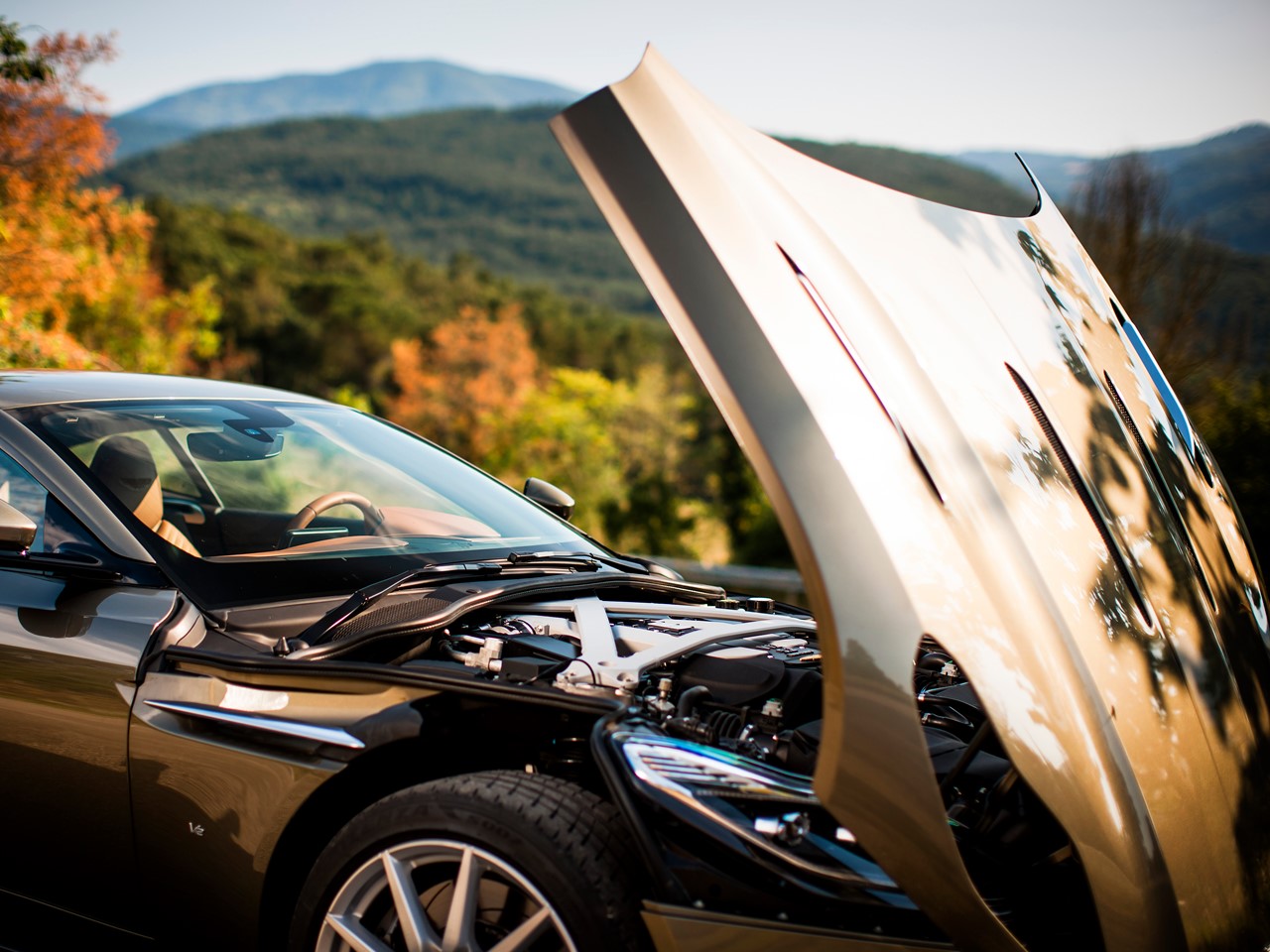 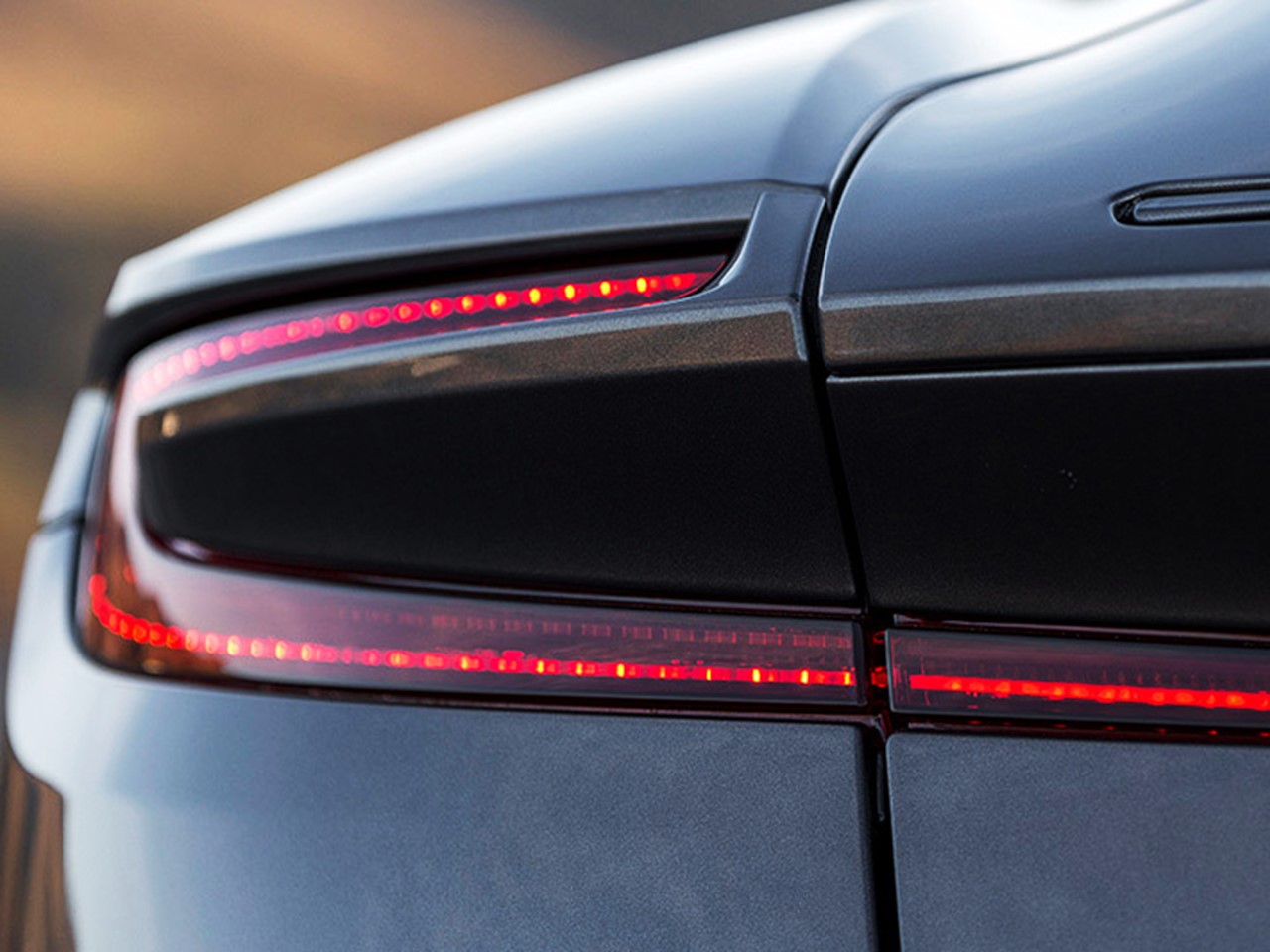 The rear end design is as dramatic as the front end ensemble. Newly designed LED taillamps are the focal point. Flowing sculpted lines end perfectly with an impressive diffuser assembly. Prominently displayed matte finish stainless-steel exhaust ports echo the famous tuned baritone symphony from its mighty V12 engine. The car is drop-dead gorgeous which is the major reason why Aston Martin’s involvement in the automotive industry remains central…never peripheral. There’s no soft-pedaling an Aston Martin.  The DB11 is a peerless collage of aluminium, glass, and British technology. 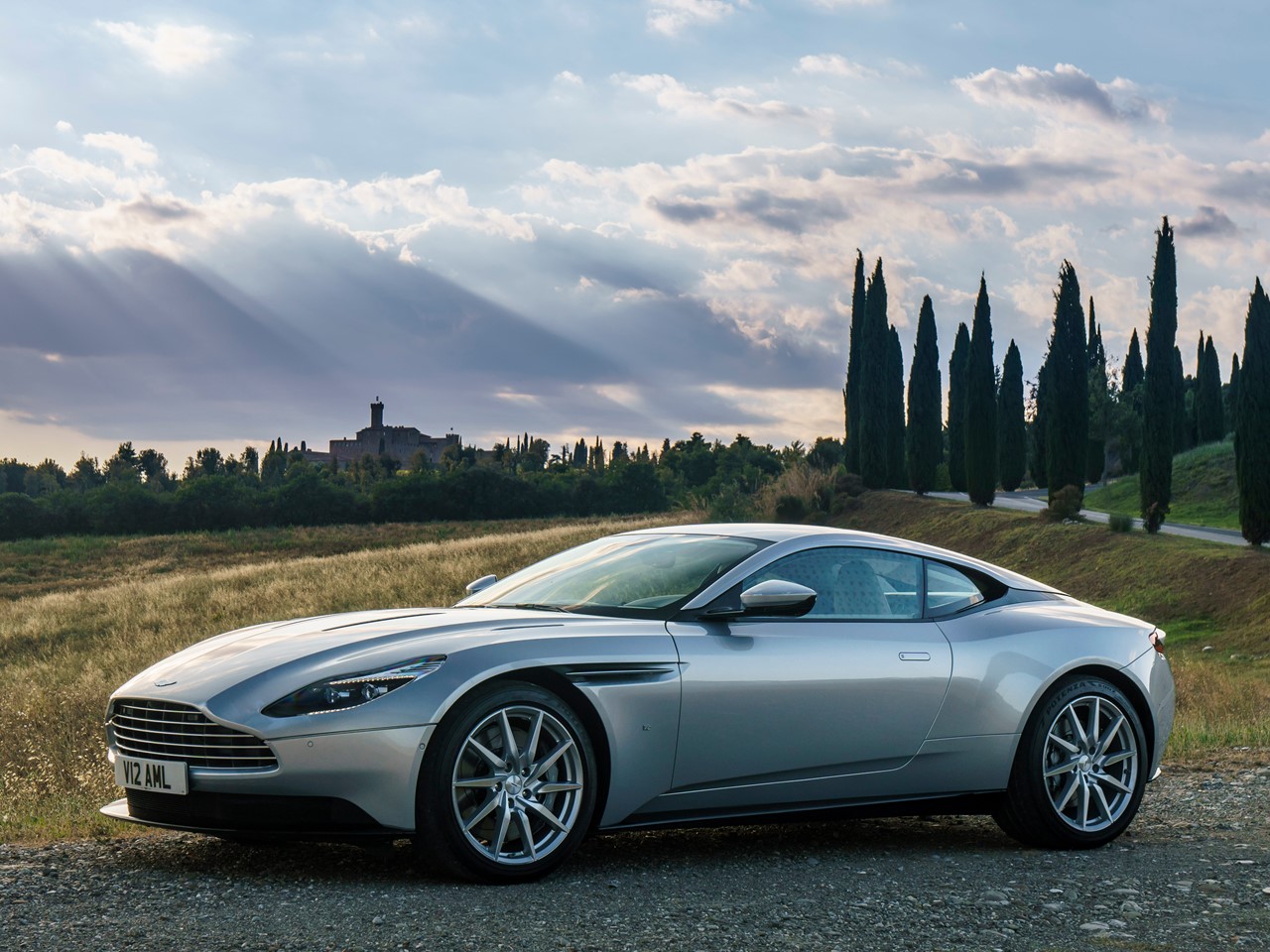 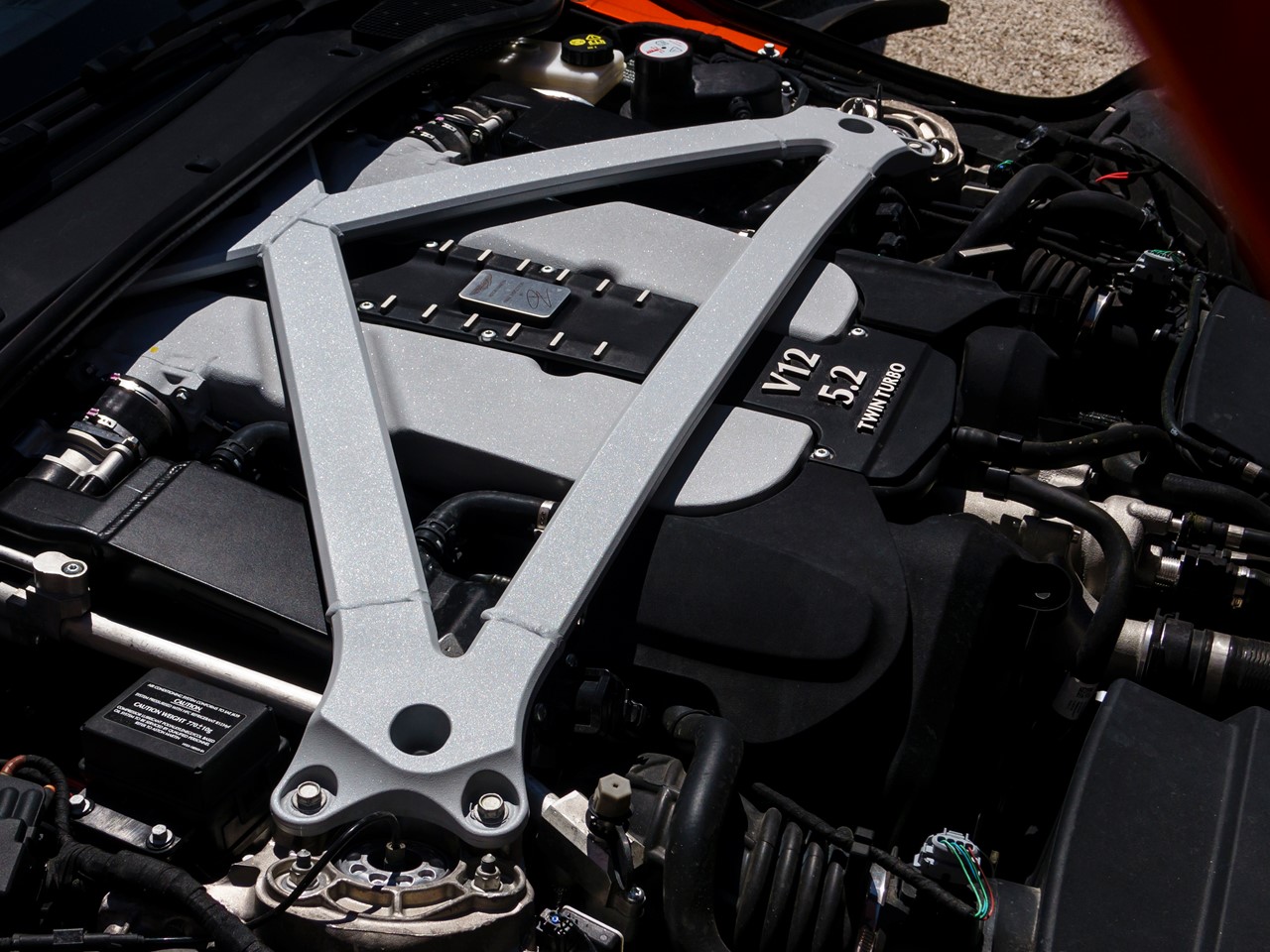 As if the bold new exterior design isn’t enough to convince you…the magnificent all-new aluminium V12 engine should sign, seal, and deliver the deal. The 5.2 litre 48-valve twin-turbocharged V12 cranks an audacious 600 bhp @ 6,500 rpm packing a prolific punch with 700 Nm of peak torque @ 1,500 rpm. Longitudinal acceleration is rated as 0-62 mph in just 3.9 seconds with a top speed in the 200 mph range. The DB11 is the most powerful and efficient production model in Aston Martin history.

The alloy quad overhead cam bi-turbo V12 boasts a start/stop cylinder de-activation system. This ingenious design will switch to an in-line 6-cylinder configuration under normal driving situations to increase fuel economy.  It also means that the twin-turbocharged V12 shuts down one bank of 6-cylinders AND one of the turbochargers. This measure reduces engine wear by switching between banks keeping the catalyst hot.

The front mid-mount engine is set up for rear wheel drive. The rear mid-mounted 8-speed automatic gearbox has an electronic shift by wire control system for those who prefer to do the shifting themselves. The DB11 is fitted with an alloy torque tube with a carbon fibre prop shaft to save weight, and a limited slip torque vectoring differential to maintain traction under all driving situations. Extraordinary sports car performance is just a tap of the accelerator pedal away.

A masterful grand tourer in every aspect

The DB11 is more than just a fancy sporting machine…it’s an Aston Martin. An impressive array of logistics accompany this iconic road-going masterpiece. Ingenious Launch Control – the same technology developed for the brand’s class-leading motorsport division – balances throttle, transmission, traction, and damping controls to optimize take-offs from a standing start catapulting the DB11 as quick as a cat. 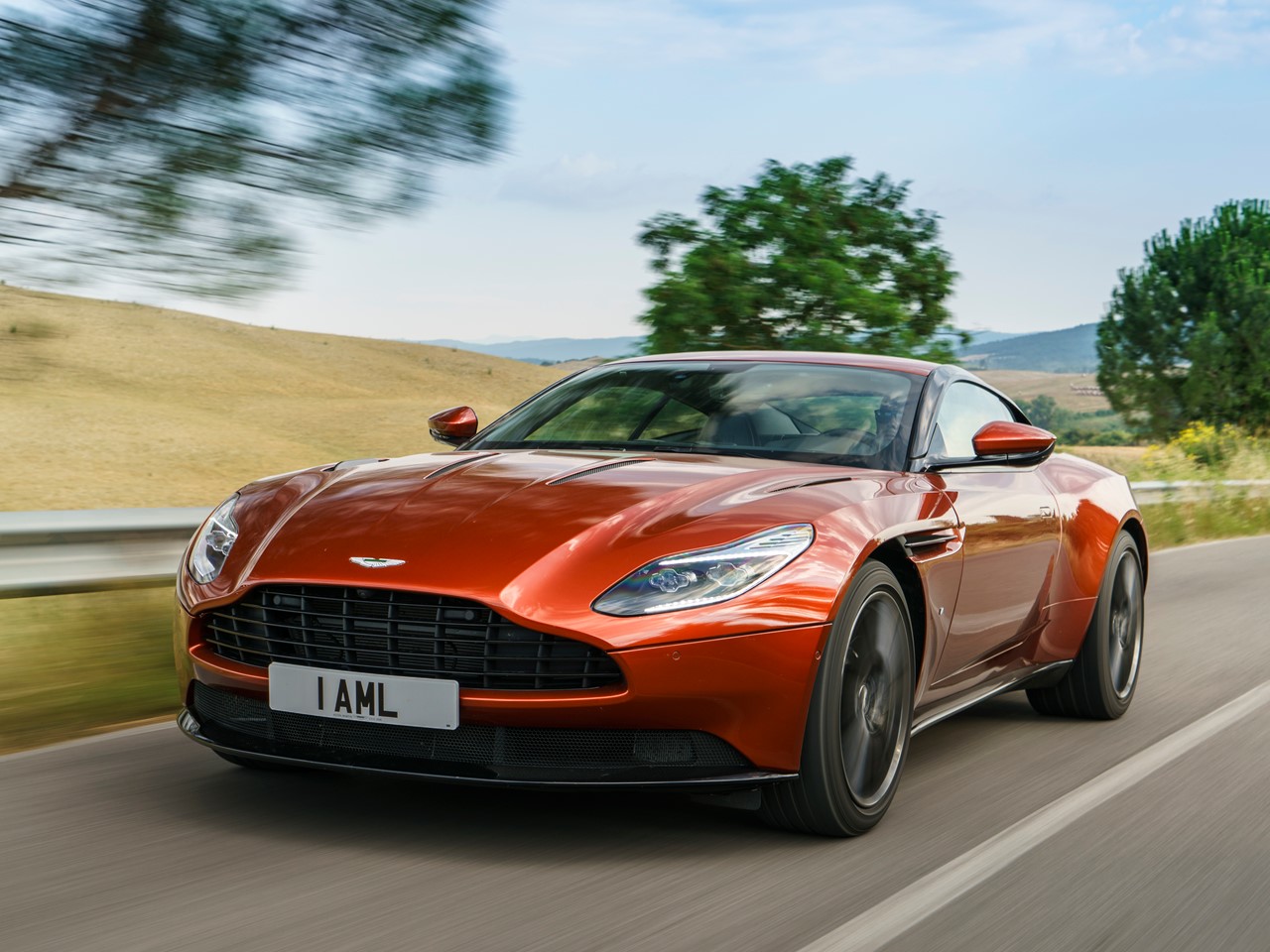 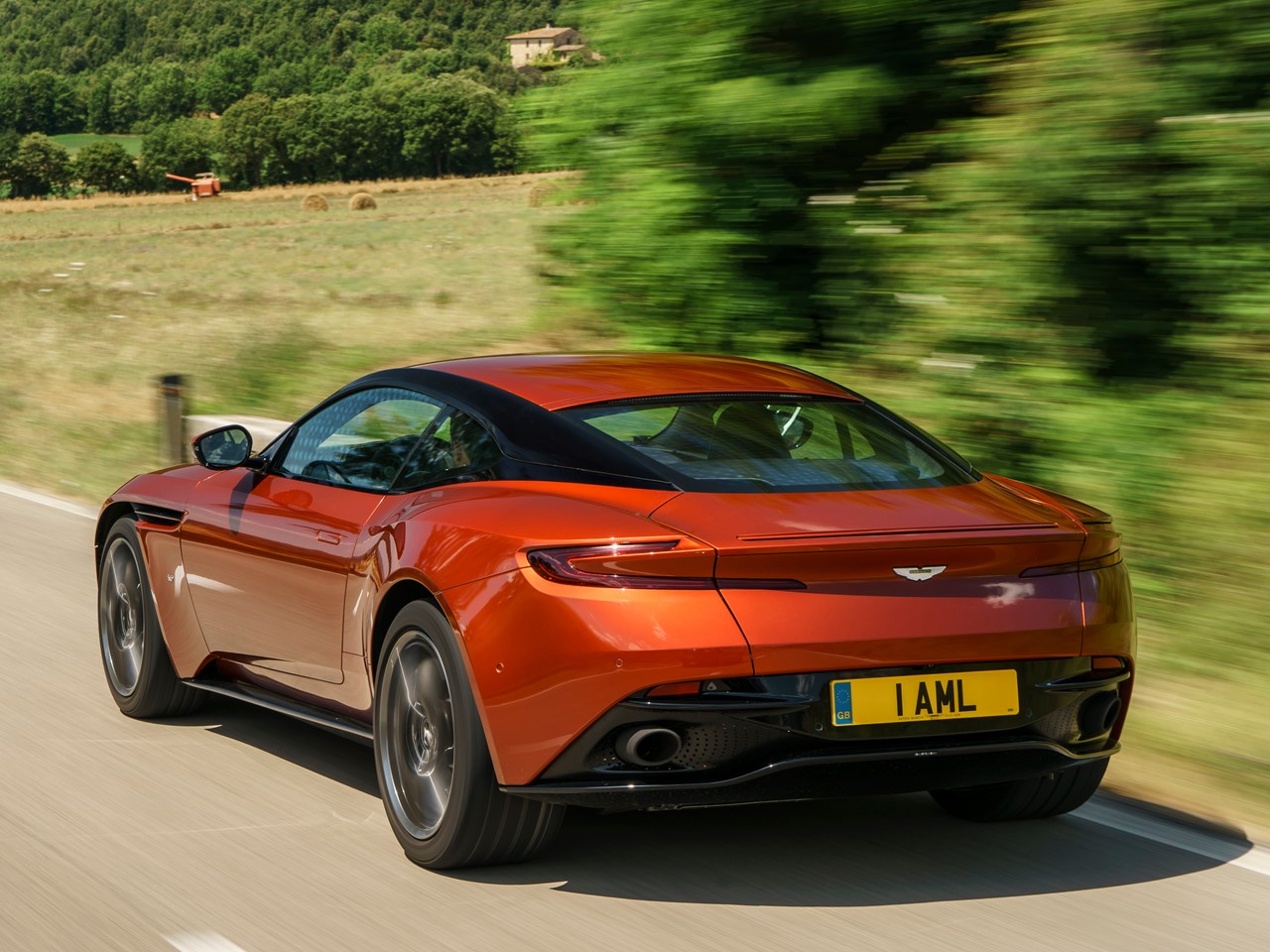 Beneath the sumptuous design of the DB11 is a sophisticated network of Aston Martin technology. It will feature Aston Martin’s newly engineered architecture. The previous VH (Vertical Horizontal) design platform has been used since 2001 on all models except the One-77. The all-new bonded aluminium platform is lightweight and rigid to aid the vehicle’s wind-cheating abilities. It includes components from AMG, Mercedes-Benz high performance division. 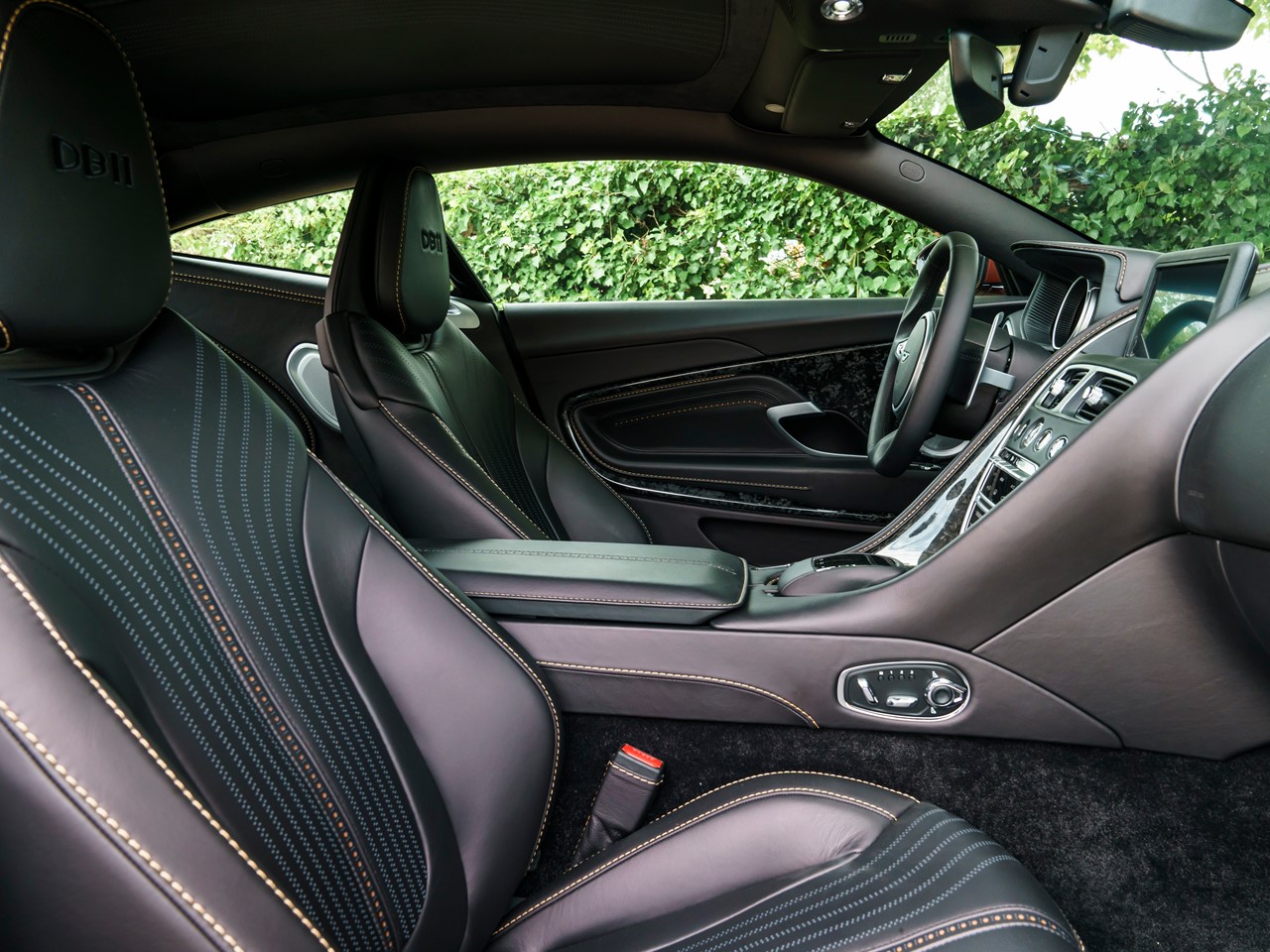 Its ergonomically designed comfort includes head restraints embellished with the familiar Aston Martin logo. The cabin benefits from the 2.5” longer wheelbase with increased head and legroom in the rear passenger compartment. There is also more room in the boot. Wider door apertures offer easier entrance and exits. This is a highly bespoke motorcar offering an inspiring array of detailing and options to satisfy the most discerning clientele.

The all-new instrument panel has a full color 12” TFT LCD display that contains all of the DB11’s primary information. Another 8” TFT screen is centrally located for infotainment including Satellite Navigation and is controlled by a rotary controller. An optional touchpad offers character recognition, multi-touch and gesture support. Aston Martin Premium Audio or an available Bang & Olufsen sound system upgrade brings concert hall quality along for the drive. A convenient Parking Assist feature is equipped with a 360 degree camera. The DB11 is a luxury sport car complete. Everything is pleasing to the eye and convenient to the touch… 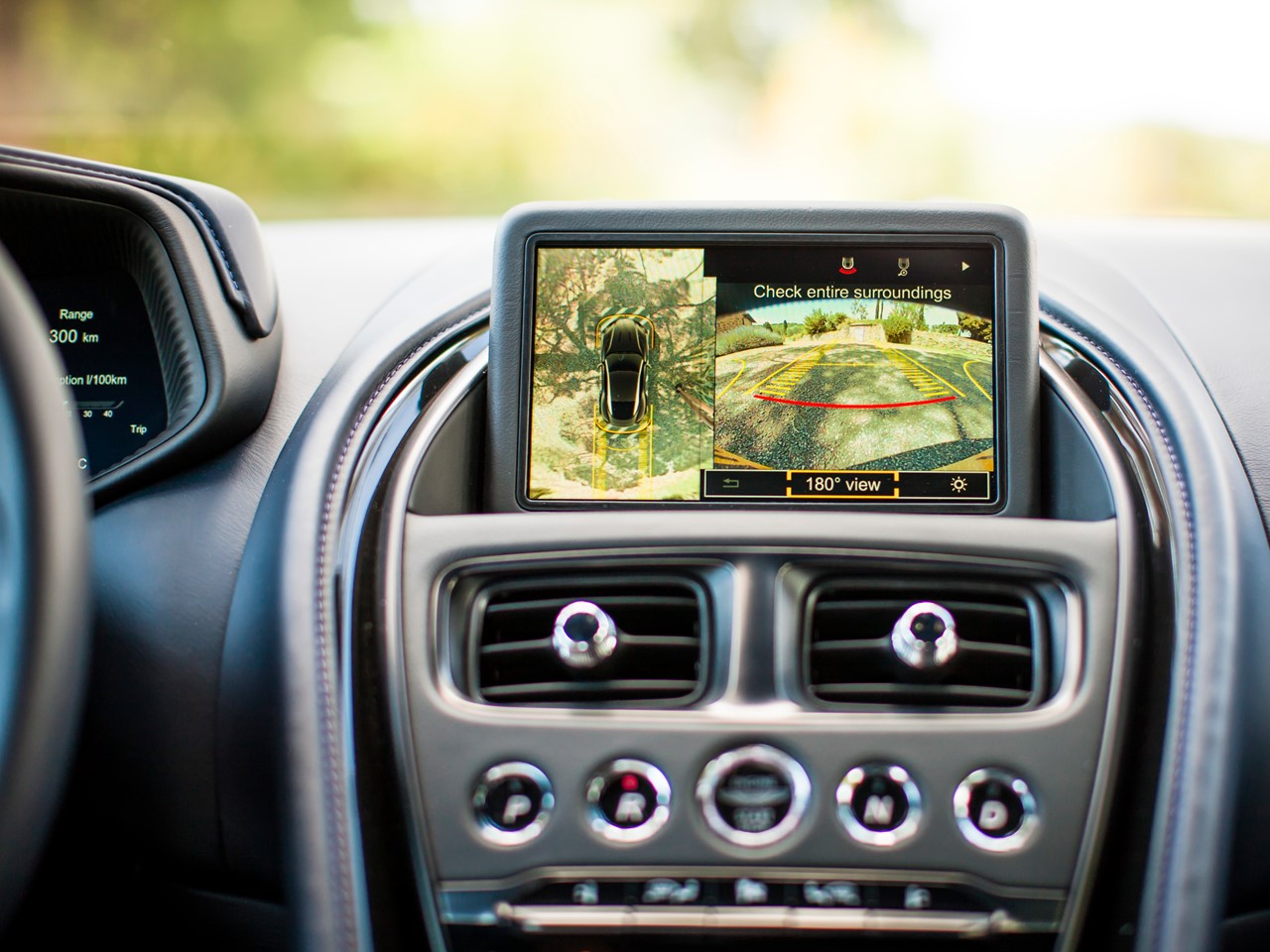 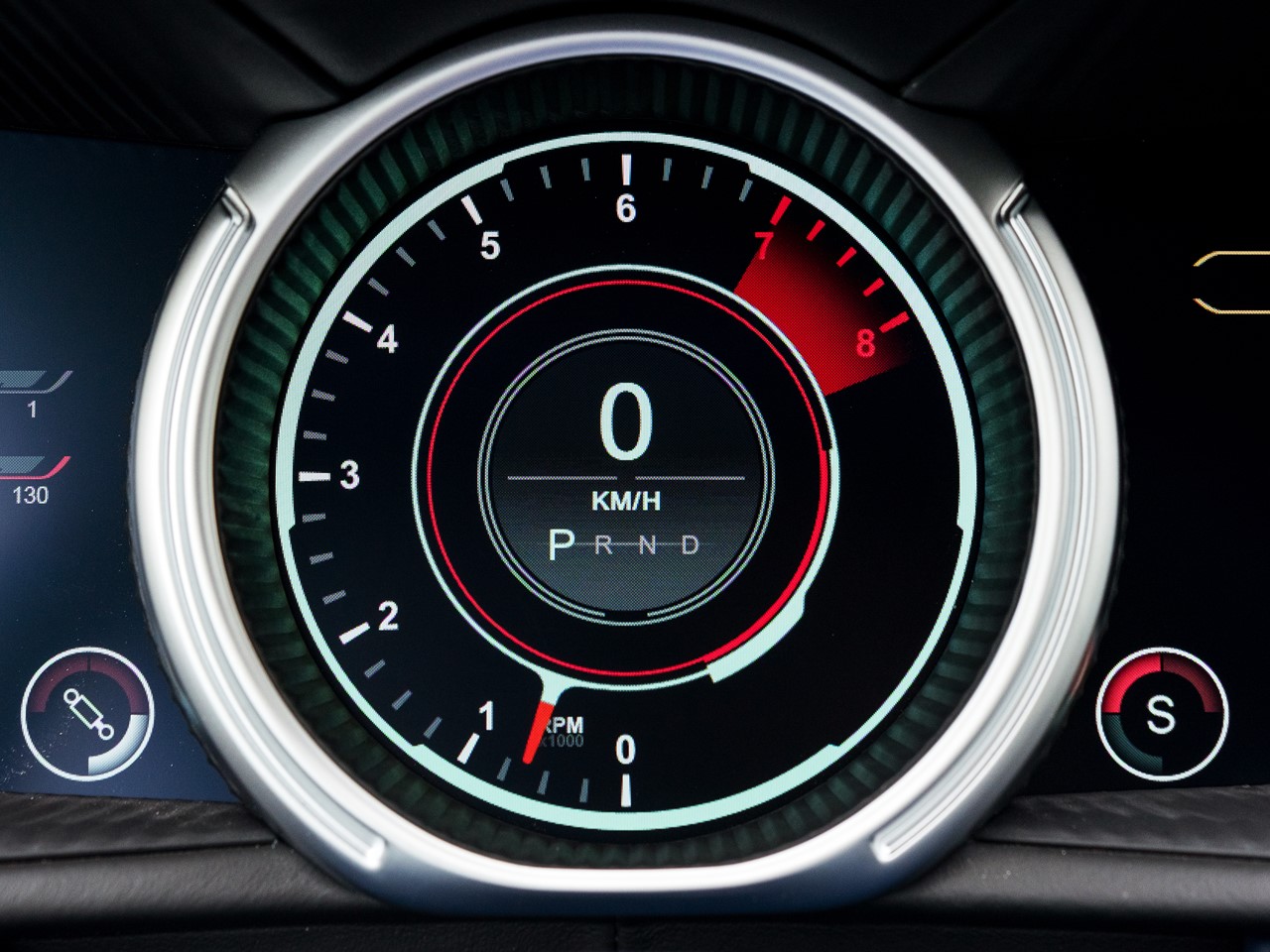 An Aston Martin is one of the world’s most eloquent possessions. It is designed for men and women of taste who have worked hard to get where they are in life. Its poised beauty is the envy of the auto industry. Through evolution, the Aston Martin becomes even lovelier. The latest offering in this exclusive continuing saga is the DB11. As the world bids farewell to the iconic DB9 series – the formidable presence of the DB11 takes center stage. 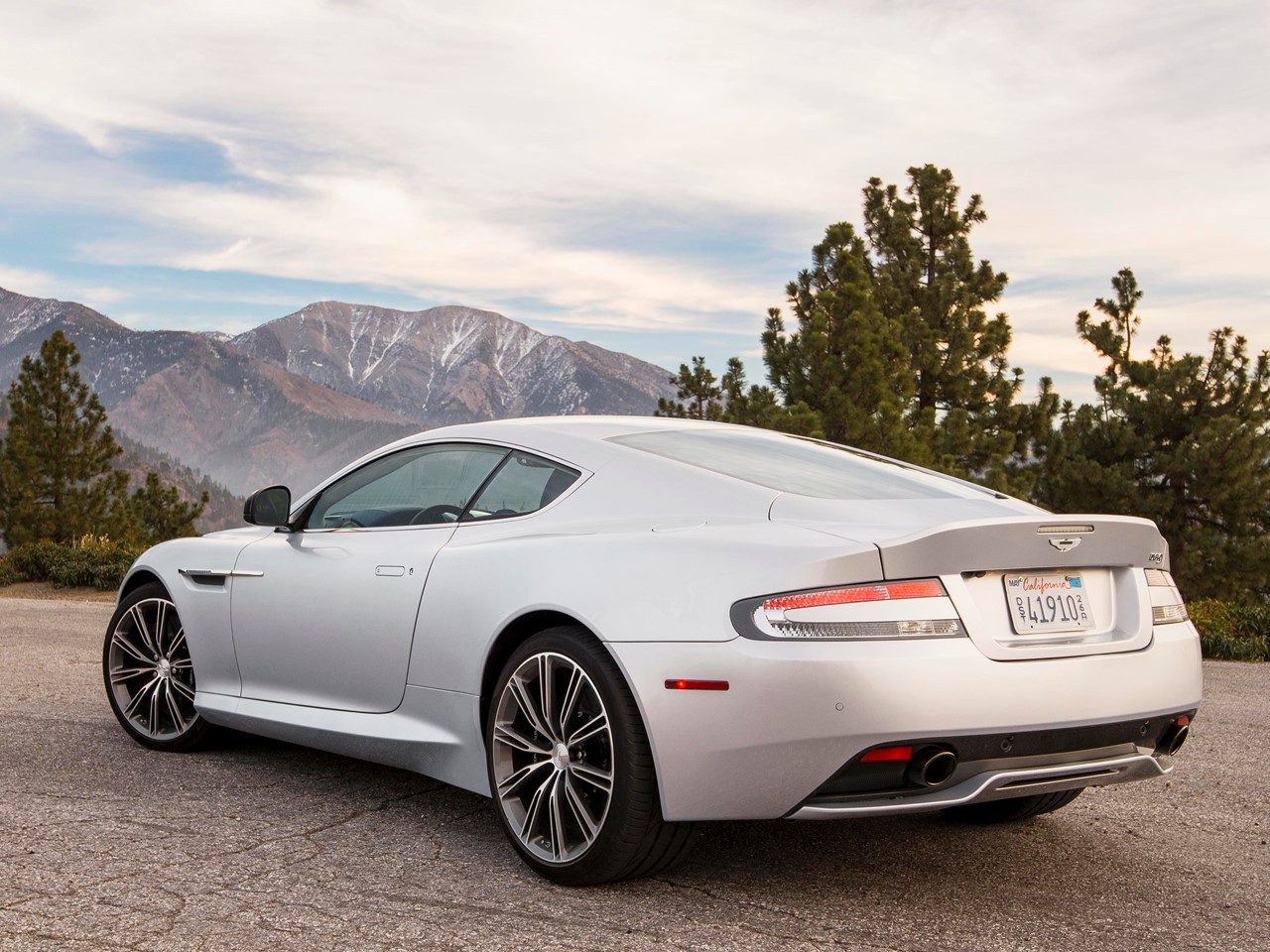 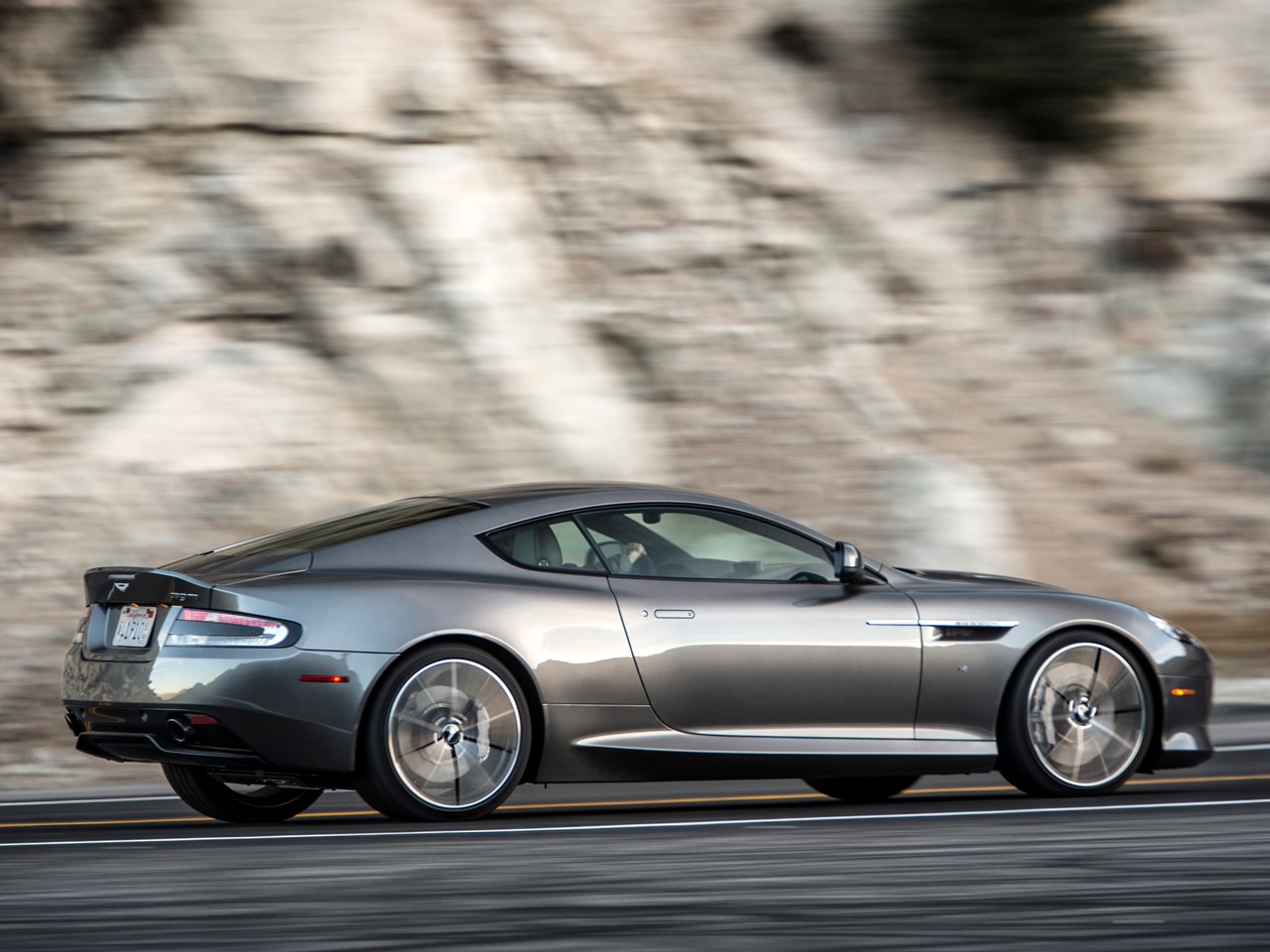 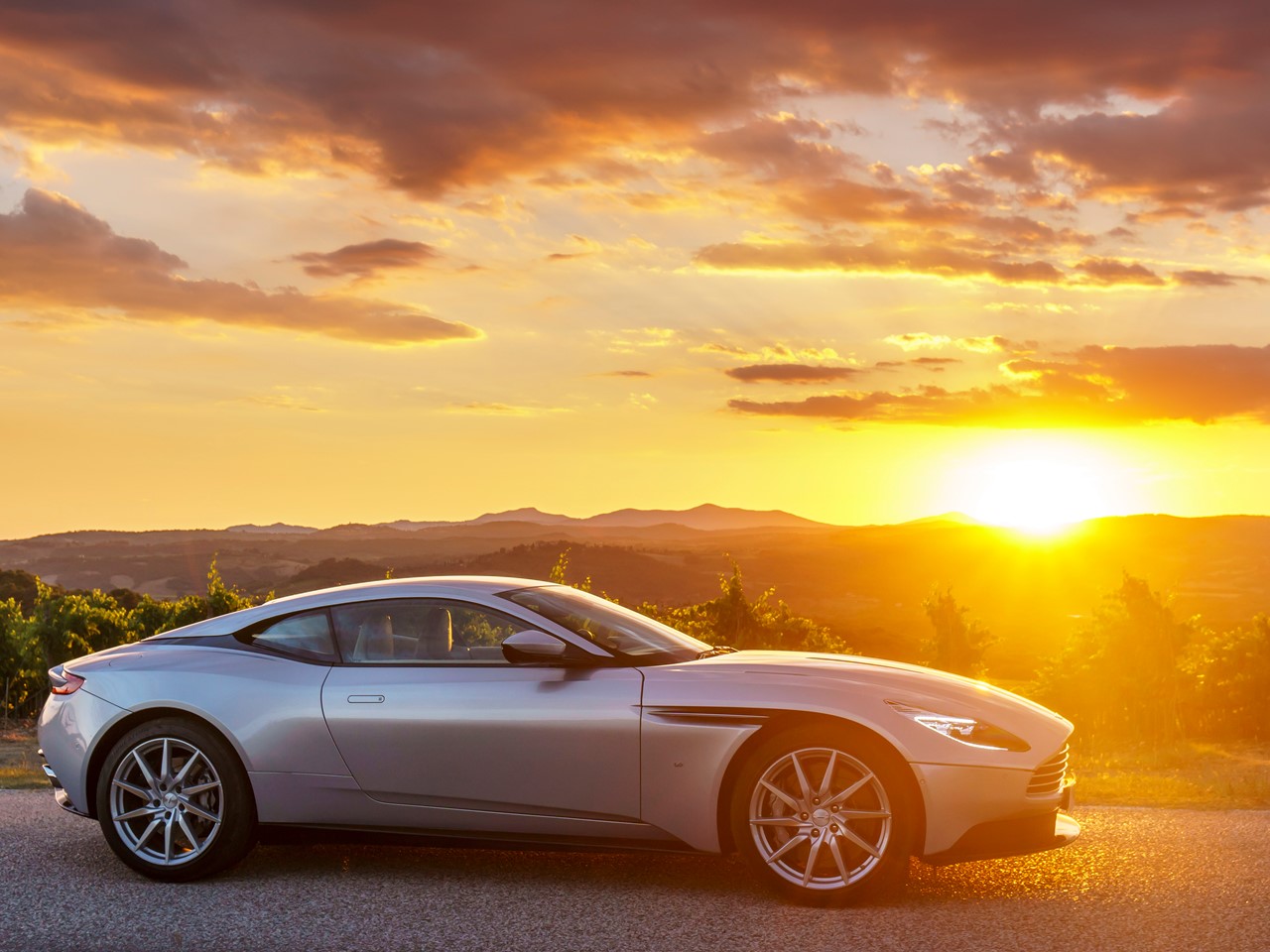 This sophisticated new expression of Aston Martin is the most powerful and efficient road-going model in the history of the brand. The ferocious new 48-valve, 5.2 litre twin-turbocharged V12 engine delivers 600 horses with a swift top speed in the 200 mph range. The DB11 is the epitome of handcrafted grand tourers with every luxury and convenience presented as standard equipment to make each drive enjoyable and considerably effortless. Aston Martin has once again exceeded superlative with the introduction of the 2017 DB11…a proud successor in the illustrious DB series of high performance motorcars. Welcome to the power…beauty…and soul of the Aston Martin DB11. It’s NotoriousLuxury in every respect. 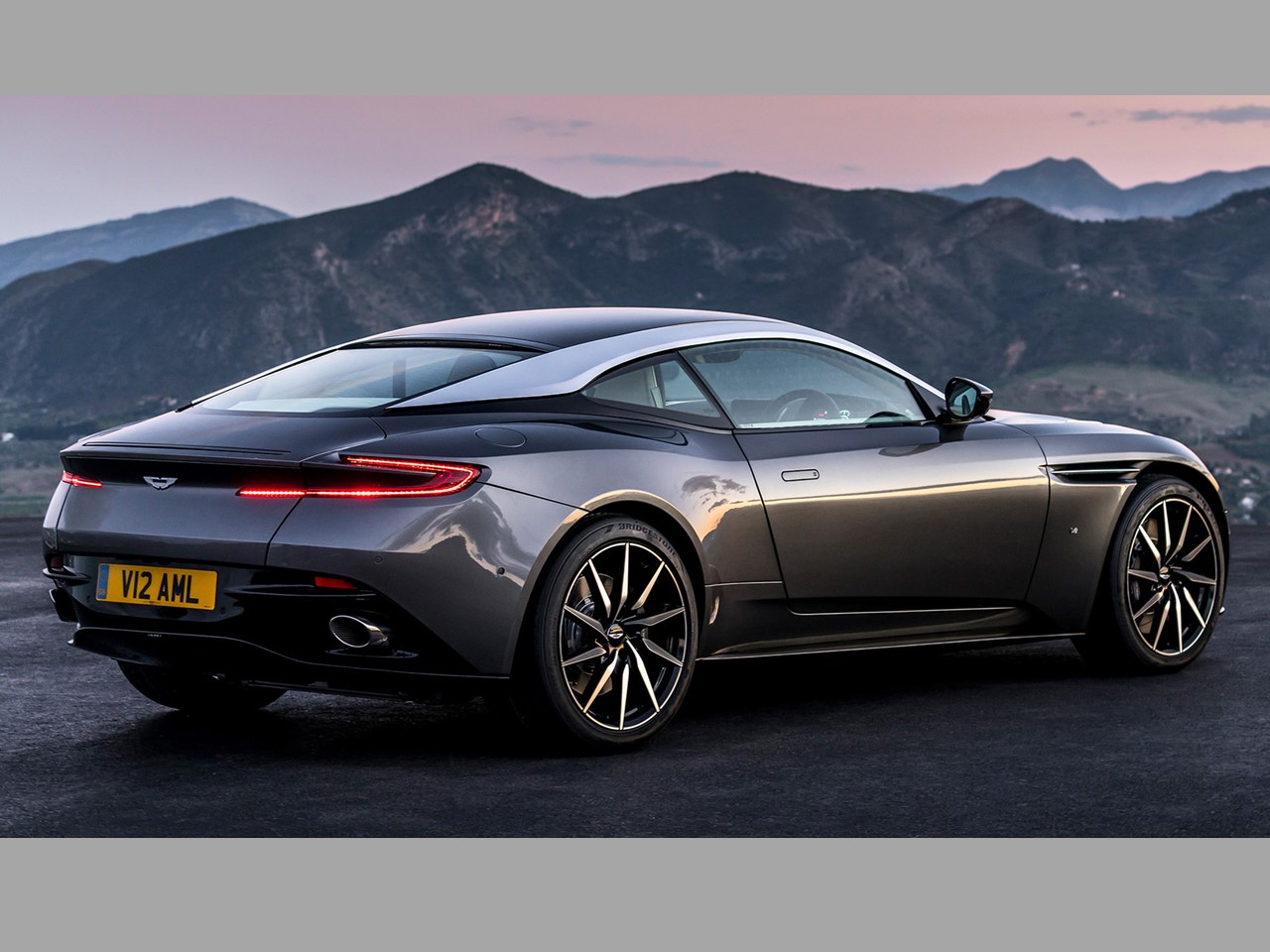 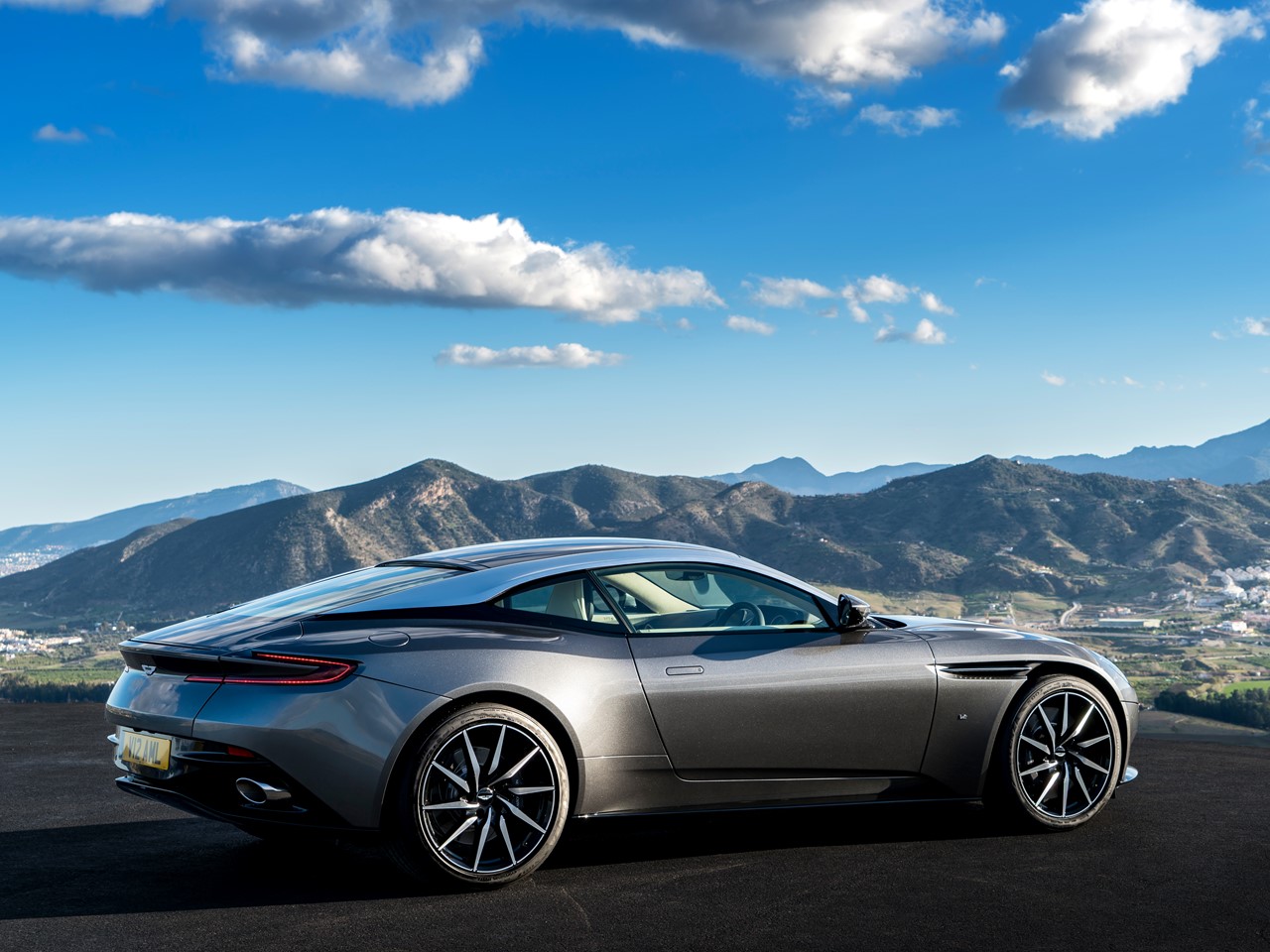 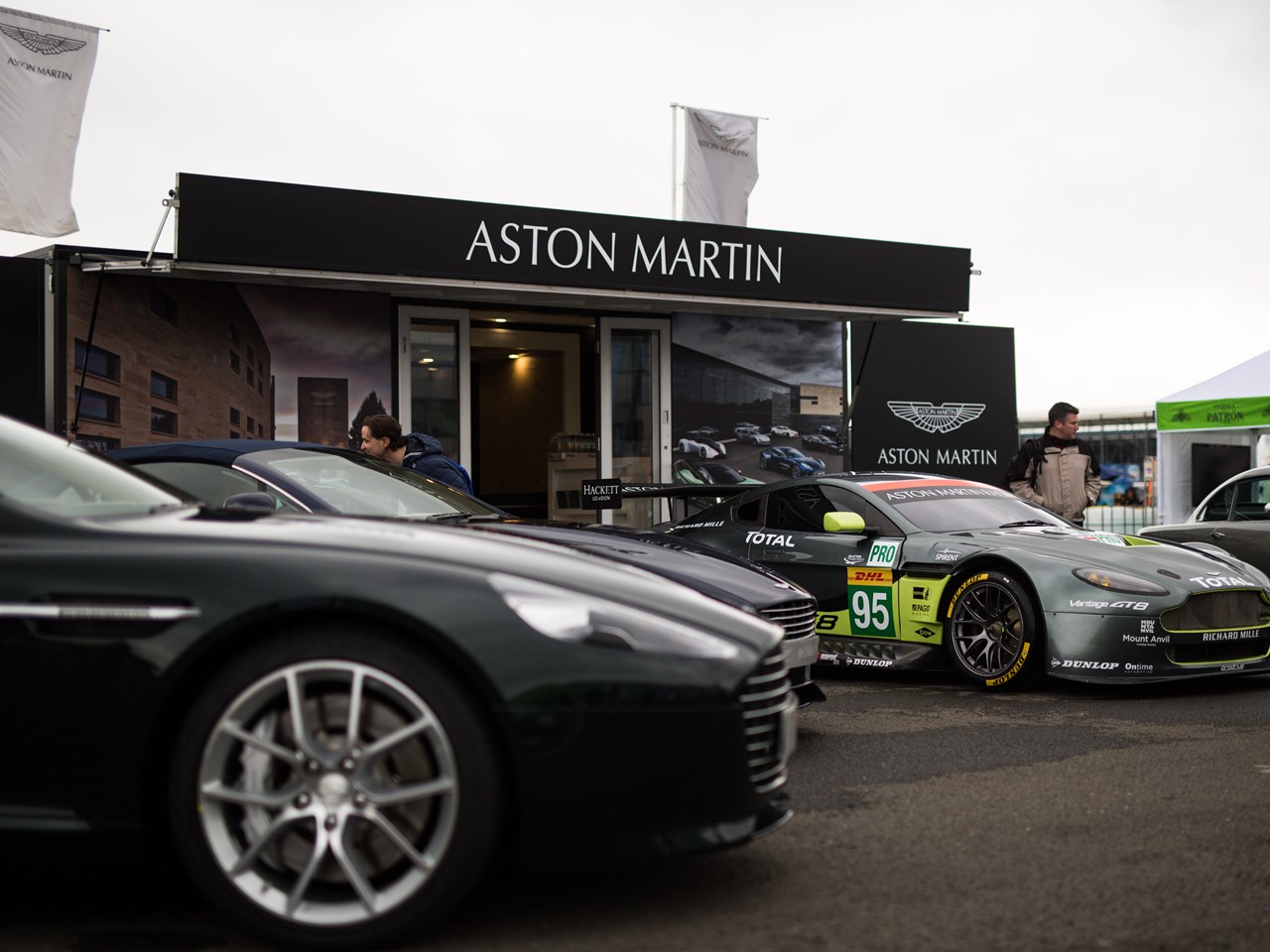 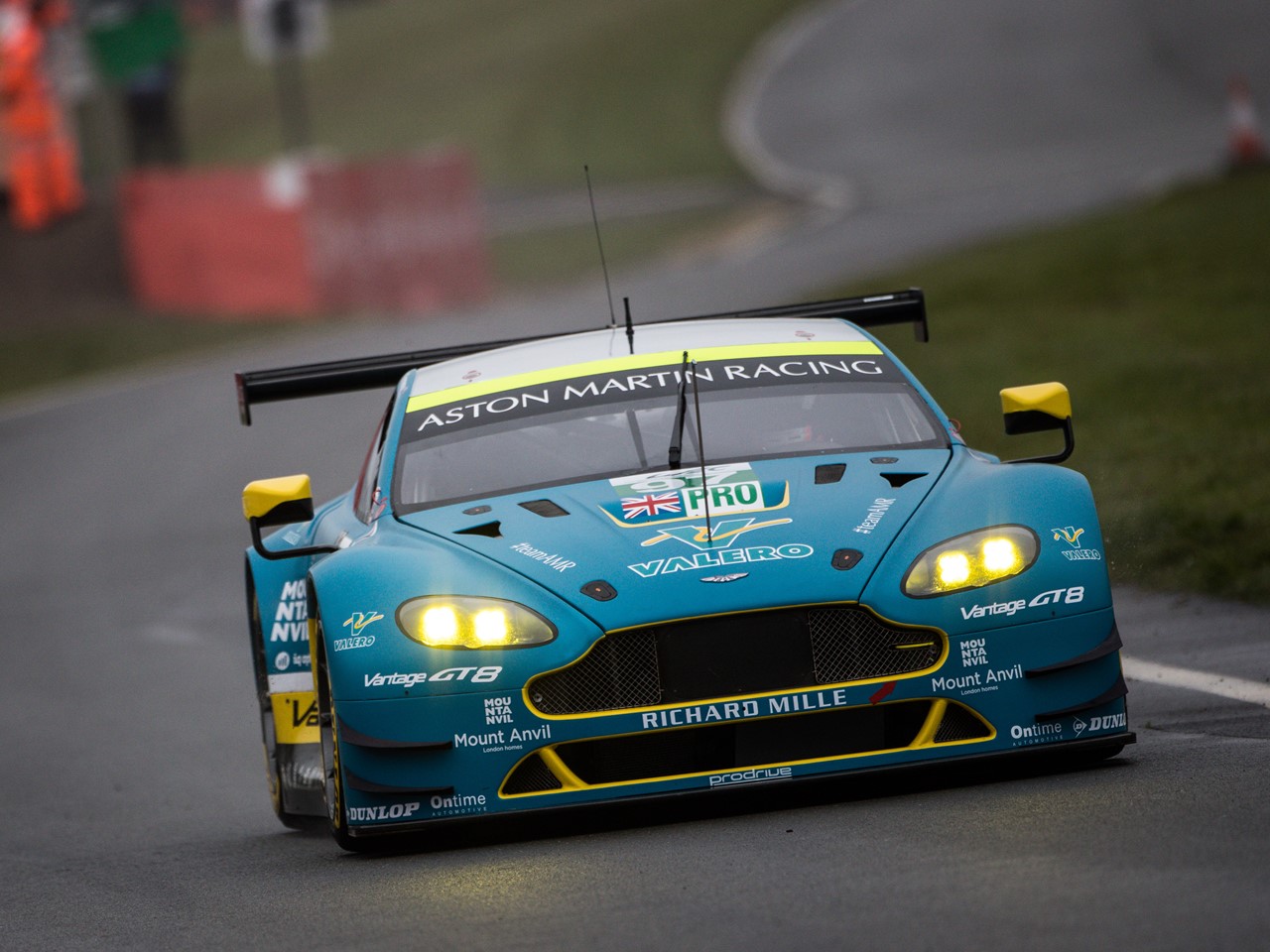 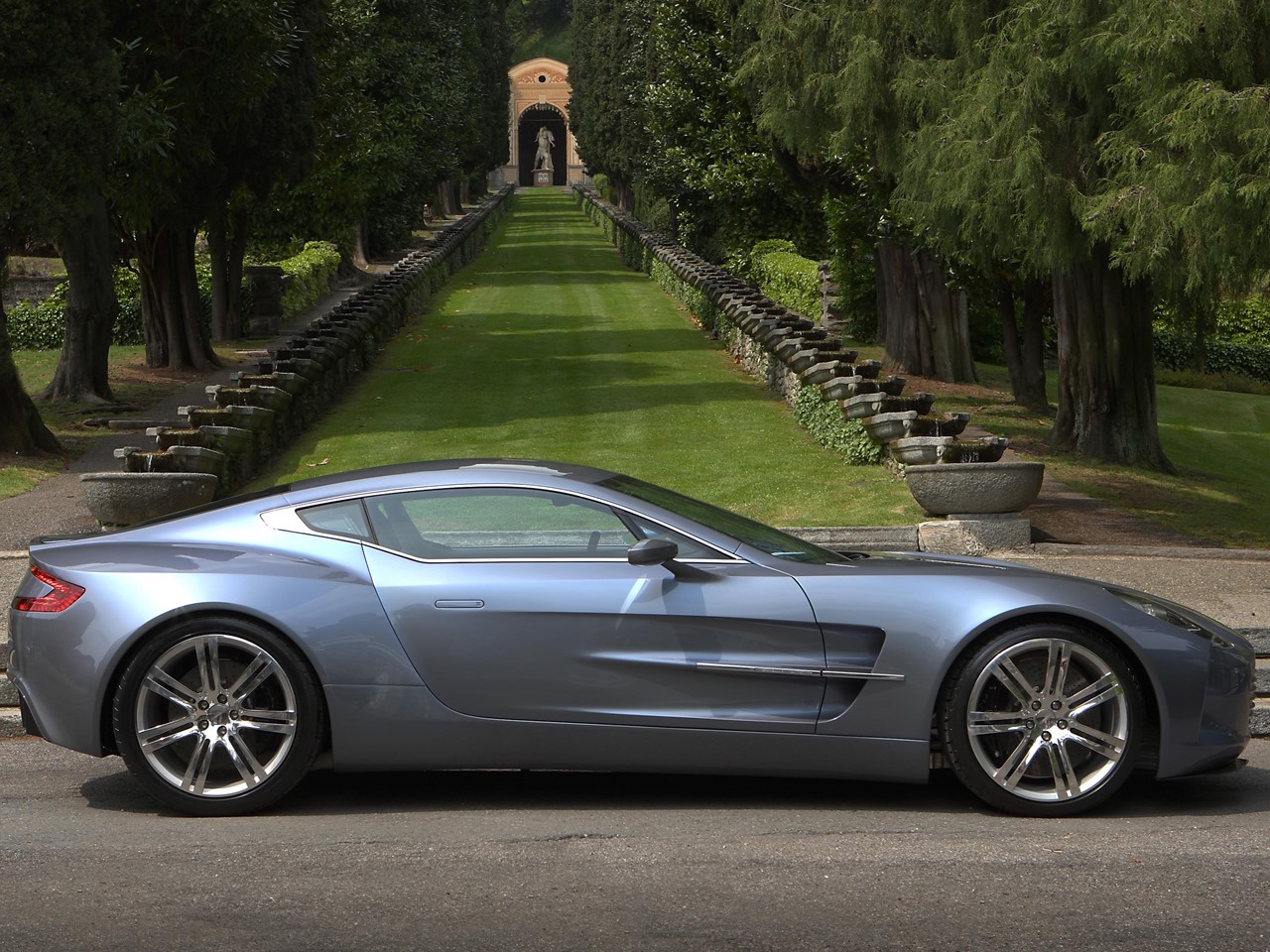 The Aston Martin DB11 is NotoriousLuxury… 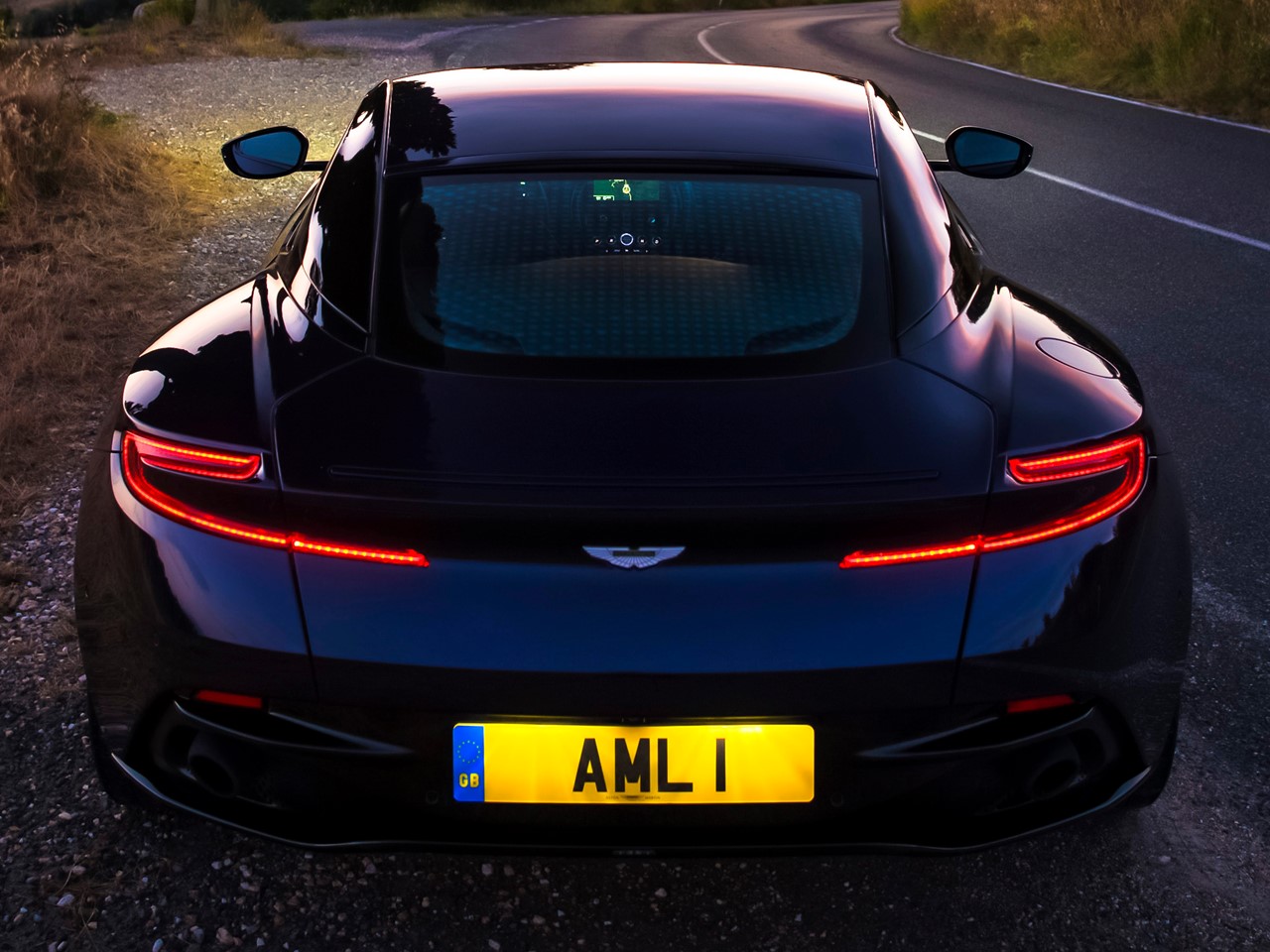