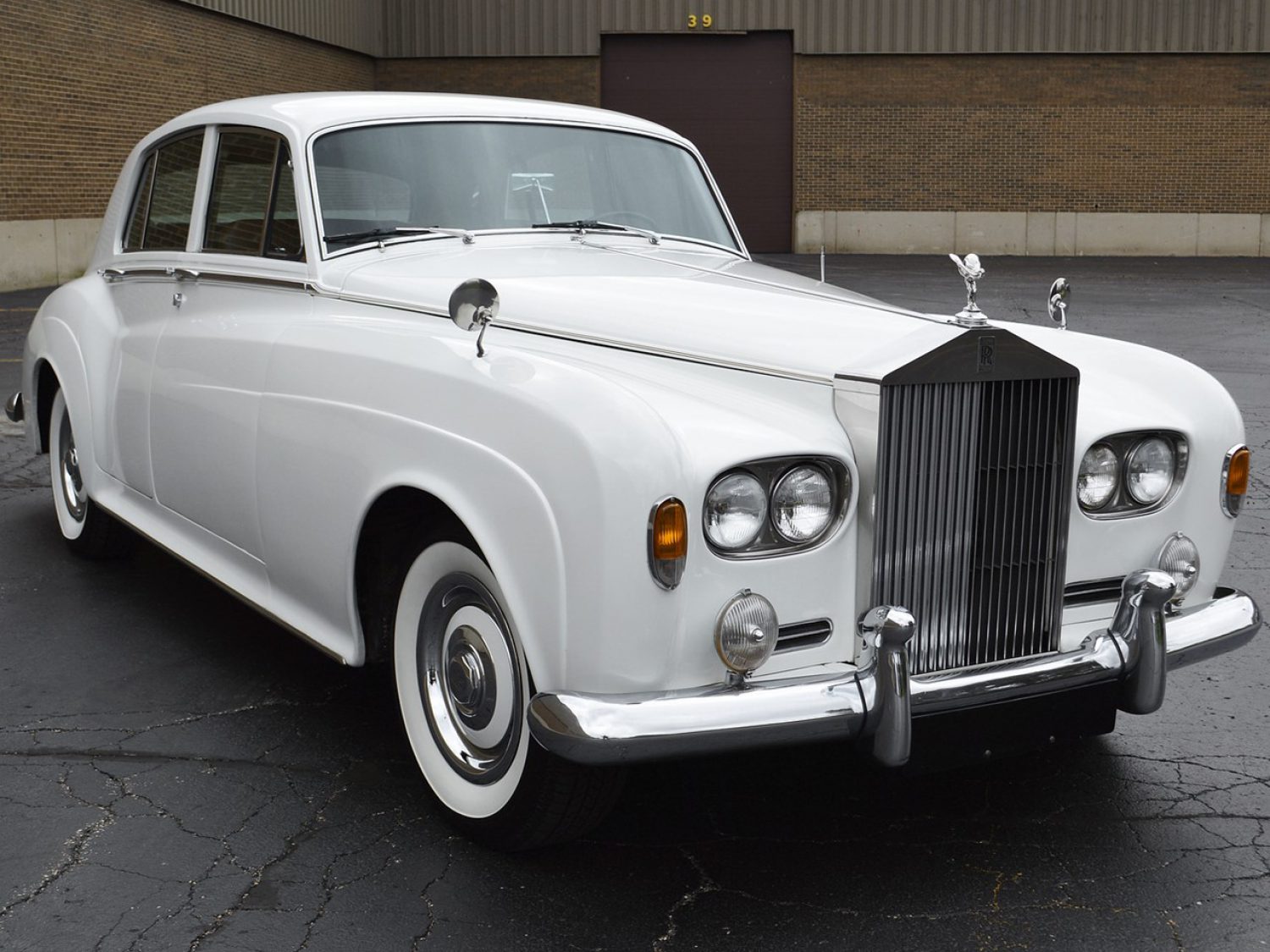 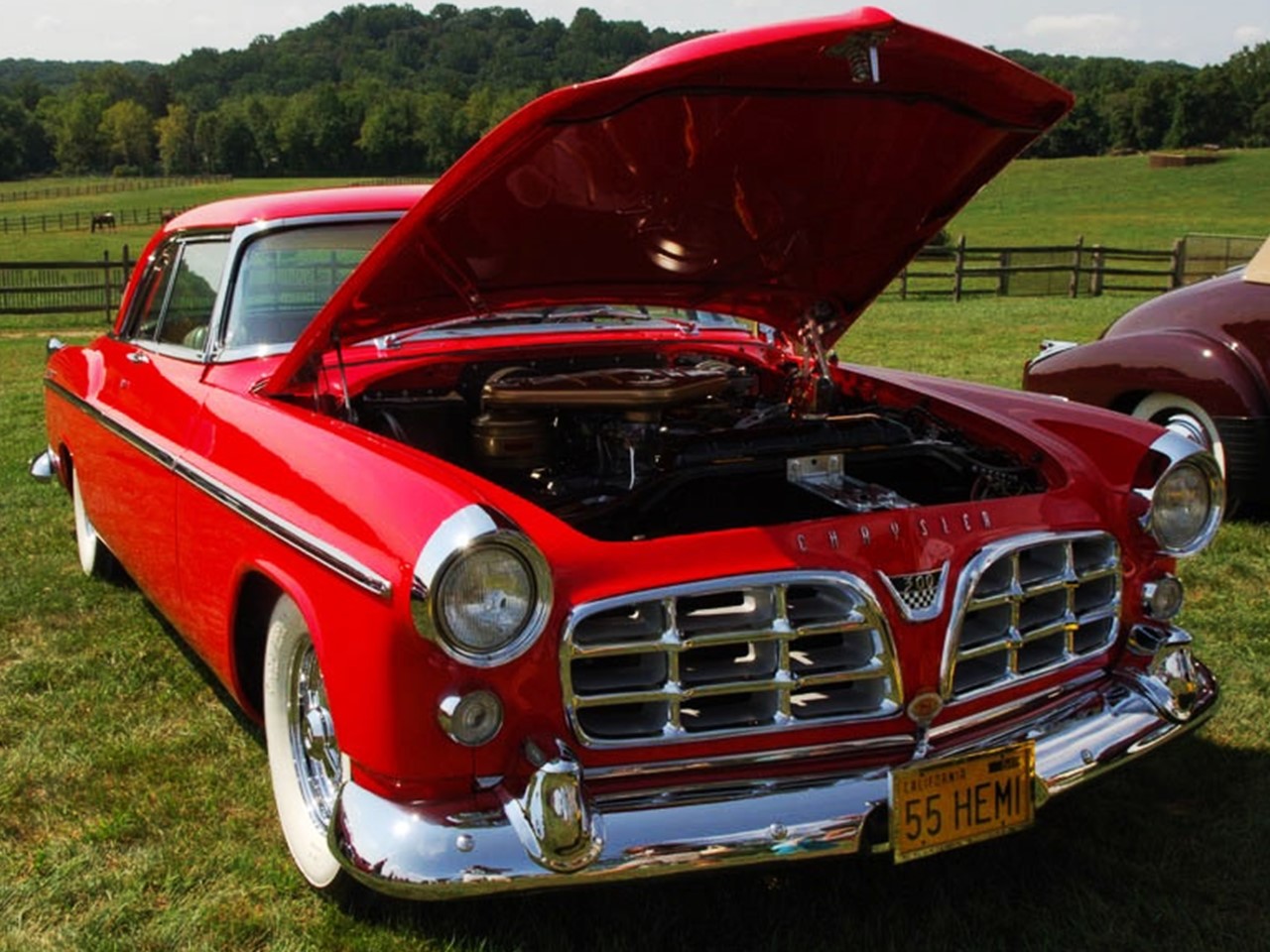 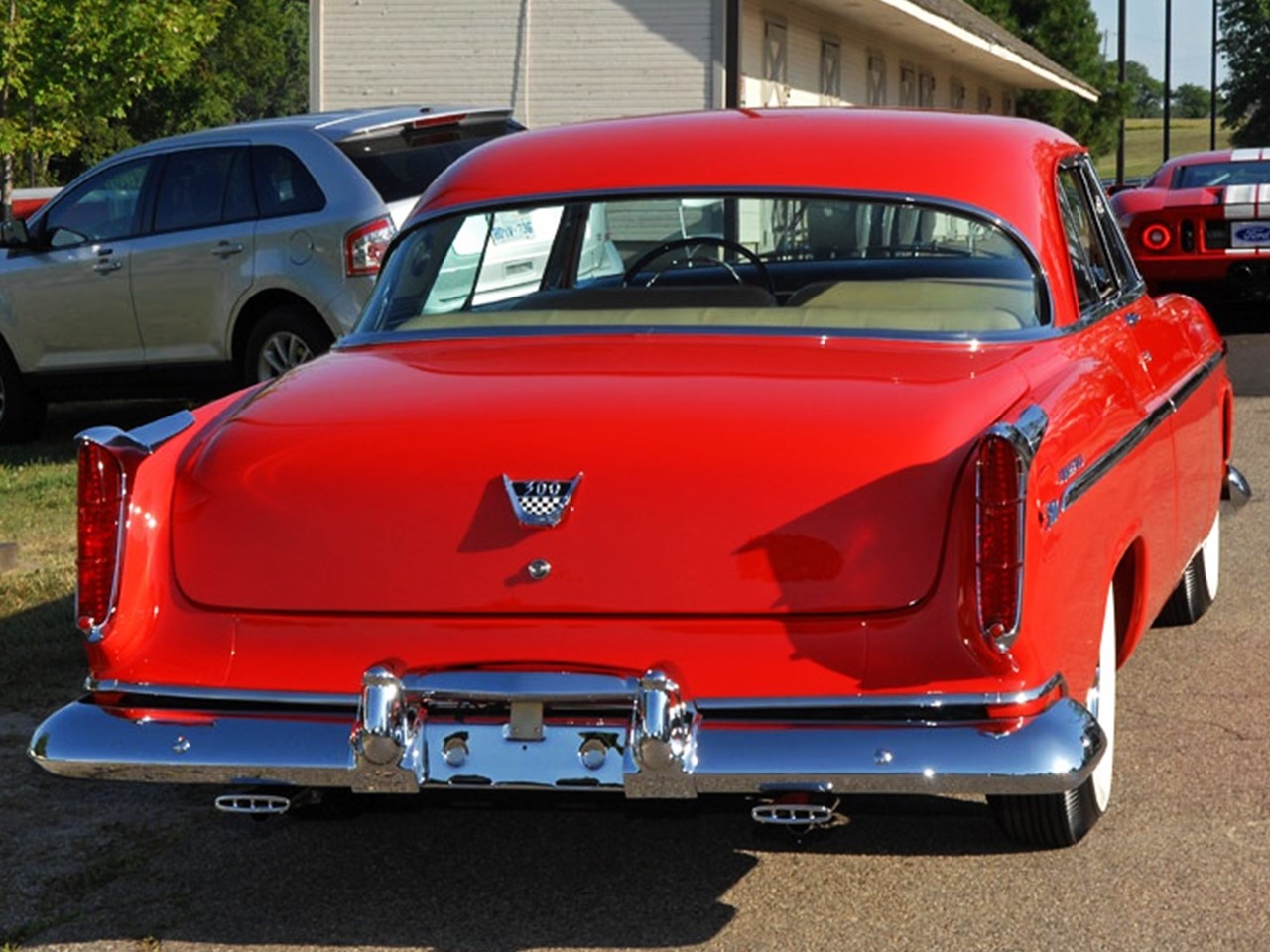 The ferocious Chrysler 300 Letter Series were formidable high-performance luxury automobiles that scorched the race tracks garnering wins with both NASCAR and AAA Championships. They weren’t just at home at Daytona Beach…these track stars melted the inner city asphalt as well. They were designed for the driver/enthusiast who demanded brawn as well as beauty…a stock car in street clothes to be explicit.

The 1955 Chrysler C-300 is the first in a series of fire-breathing performance behemoths that made MOPAR champions in the art of automobile racing. In the 1950s, NASCAR mandated rules that required cars to run strictly stock. The ultimate power plant at the time was the 331 CID hemispherical head V8 which cranked an astounding 300 horsepower – no other car could produce such prodigious power. The dynamic Chrysler 300 Letter Series cars invented the “bitch-slap.” Just ask the competitors – the Hemi ruled!

The 1955 Chrysler C-300 is one of the most dominant stock cars ever to sprint the tracks. They are the performance cars that laid the foundation for future muscle cars in America. The 300 Letter Series cars were bred for high-performance…unlike today’s power-to-weight ratio – the 300 Letter Series cars produced vicious torque-thrust. You stepped on the accelerator and went back in your seat!

This is another of Virgil Exner’s “Forward Look” vehicles that broke the tradition and began a trend for the Chrysler Corporation changing the way they looked forever. The ad campaign for the 1955 model year was “The Hundred Million Dollar Look” which helped catapult Chrysler to stardom. Virgil Exner gave the brand an identity…removing the stodgy, outmoded, old-fashioned reputation the brand had acquired replacing it with the look of tomorrow!

The 1955 C-300 was unique among performance cars. Brawn and beauty was the trademark of the Chrysler 300. The 1955 C-300 used a modified nose clip from the Imperial, the basic body shell from the New Yorker, and rear end styling cues from the Windsor. It was considered a luxury sport/personal luxury car, creating a completely new niche in the industry. Restrained use of ornamentation made it appear extremely tasteful.

While the competition were mesmerized by towering tail fins and yards and yards of gaudy chrome trim with strange styling cues – Chrysler was stripping it away discretely to create a contemporary style that challenged the years gracefully. The evolution and transformation throughout the Forward Look’s tenure gave the industry a fresh new approach to automotive design the competition quickly followed. Virgil Exner created some of the most beautiful Chryslers in the history of the brand. The Chrysler became notoriously luxurious and highly desired in both luxury and performance.

The brute is luxuriously powerful 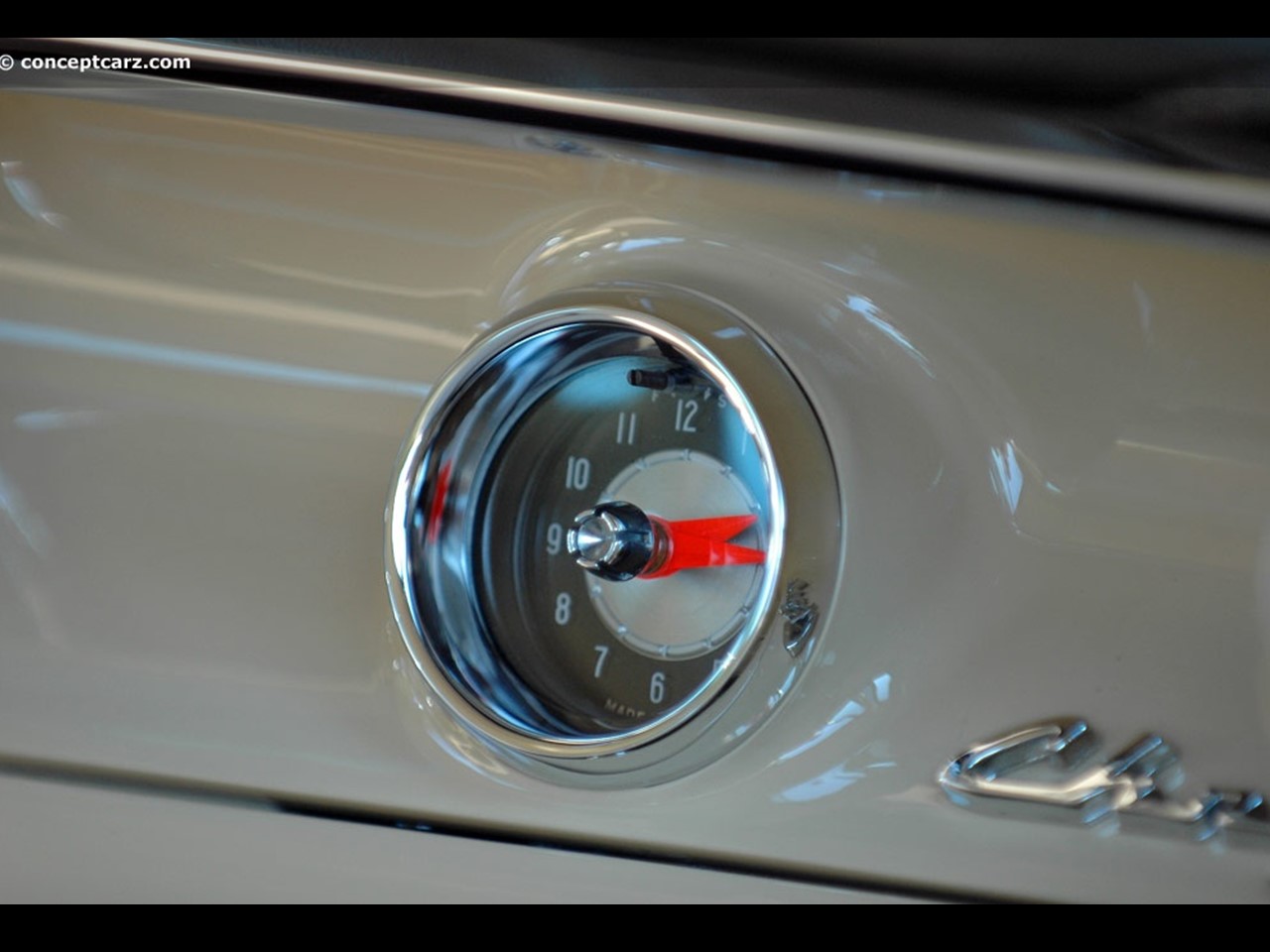 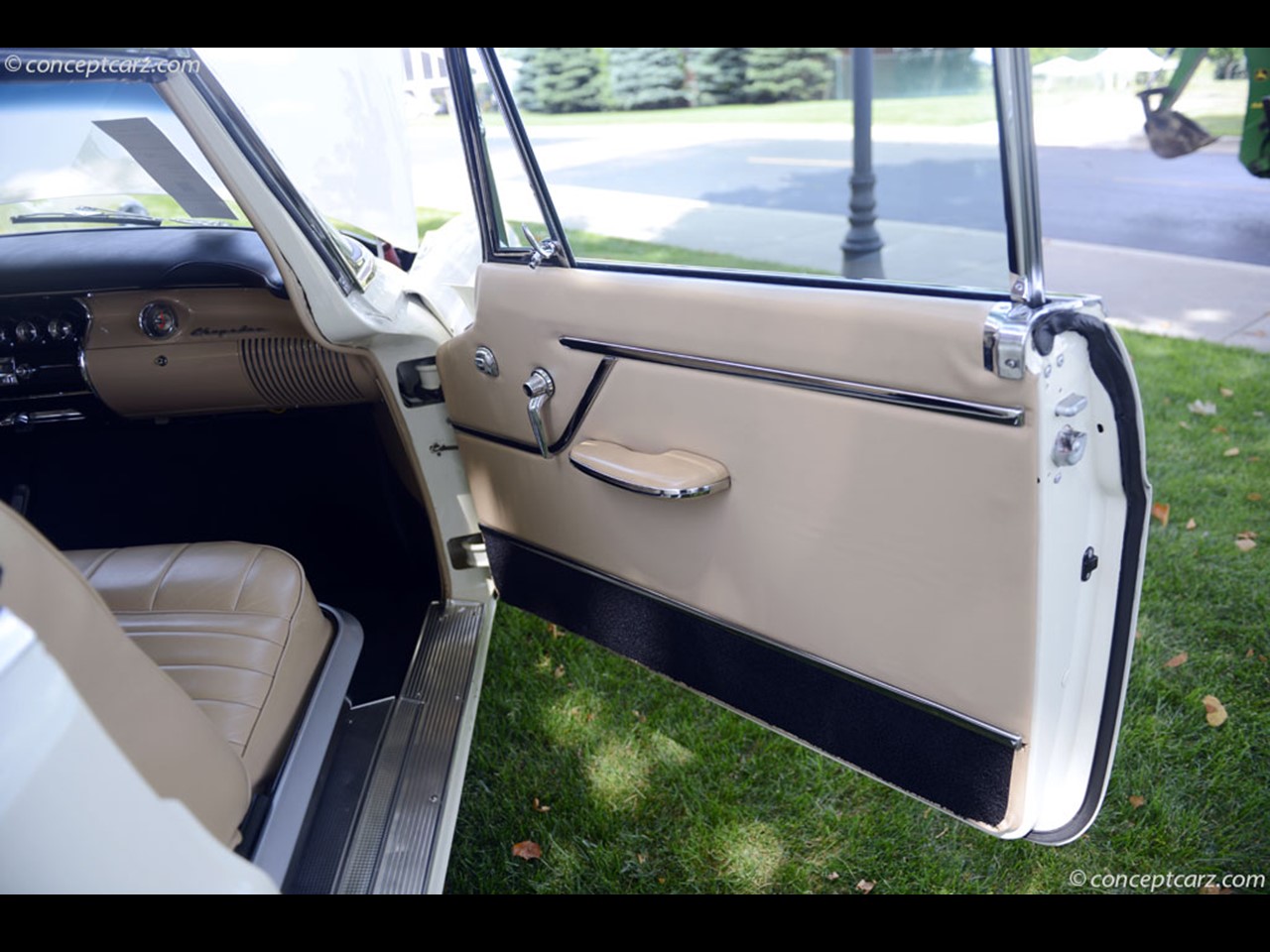 The 1955 Chrysler C-300 was featured and aimed at NASCAR circuits. It was sold for the American roads for homologation with the famous 331 CID FirePower Hemi-head V8. It said “BOO” and the competition fled into subservience. The 300 Letter Series cars were so hot they had to be driven with asbestos driving gloves. It is not a car for the faint at heart. The 1955 C-300 was equipped with solid valve lifters as opposed to the hydraulic type, a race-profiled camshaft, and a heavy-duty exhaust system with low back pressure.

It is built as body on frame construction with a stiff competition style suspension to accommodate the extreme torque thrust from the mighty Hemi! This is the first American automobile to crank 300 horses; the method to its madness is its exclusive two 4-bbl Carter WCFB downdraft carburetor set-up. The engine is mated to Chrysler’s 2-speed automatic transmission. A 3-speed manual was also available for those who preferred to do their own shifting – 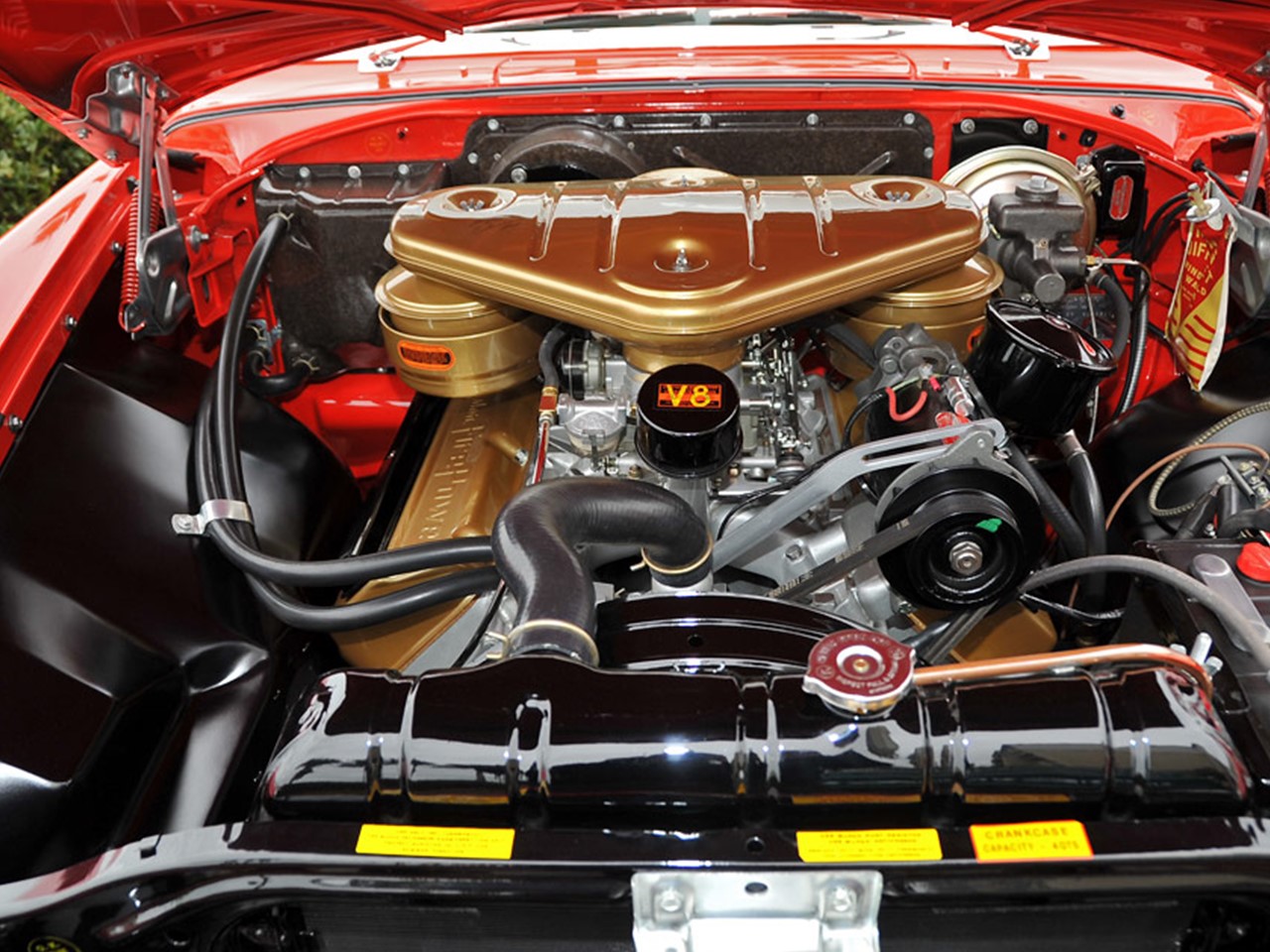 The 1955 Chrysler is the one that started the fervent evolution of performance behemoths in a dynasty of raw, spine-tingling, jaw-dropping power.  This high performance engine uses solid valve lifters as opposed to the hydraulic type for that extra POP, and a race profiled camshaft which produced a rough idle (but one couldn’t win in a NASCAR race playing “patty-cake” now could they?). The solid lifters are a tad bit noisy, but then…this car has a ferocious demeanor – if you wanted luxury, you bought a New Yorker or Imperial LeBaron…right? Even they had a ferocious nature for luxury cars – the C-300 is a bully in every respect! 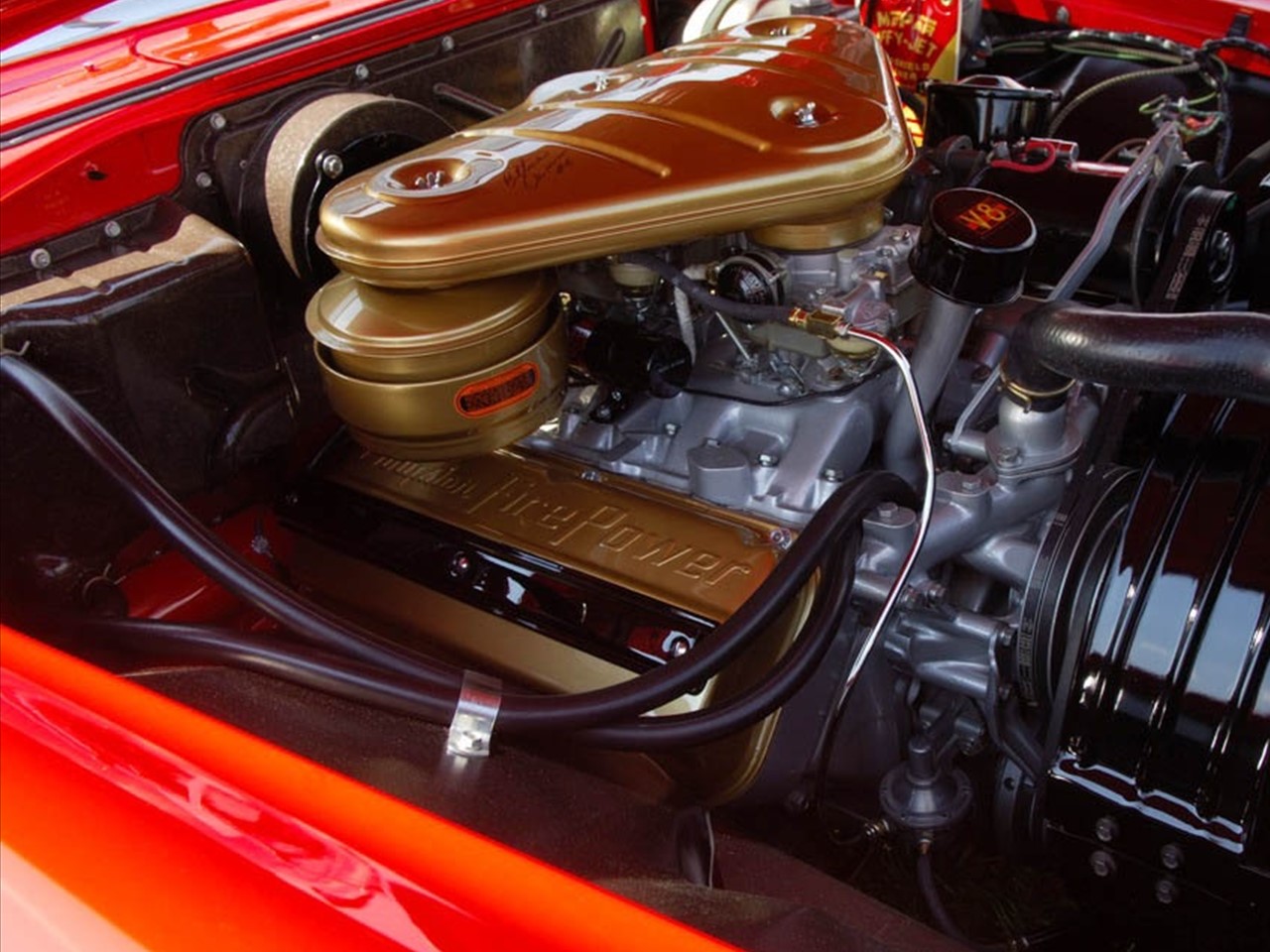 It has a top speed in the 128 mph range (but it can go even faster with a tweak or two, my cousins used to hop these up and I would go out to the tracks with them…all I can say is that these are vicious when they are customized!). It can do the ¼ mile @ 81 mph in just 17.8 seconds. This was the most powerful production passenger car in the USofA at the time – 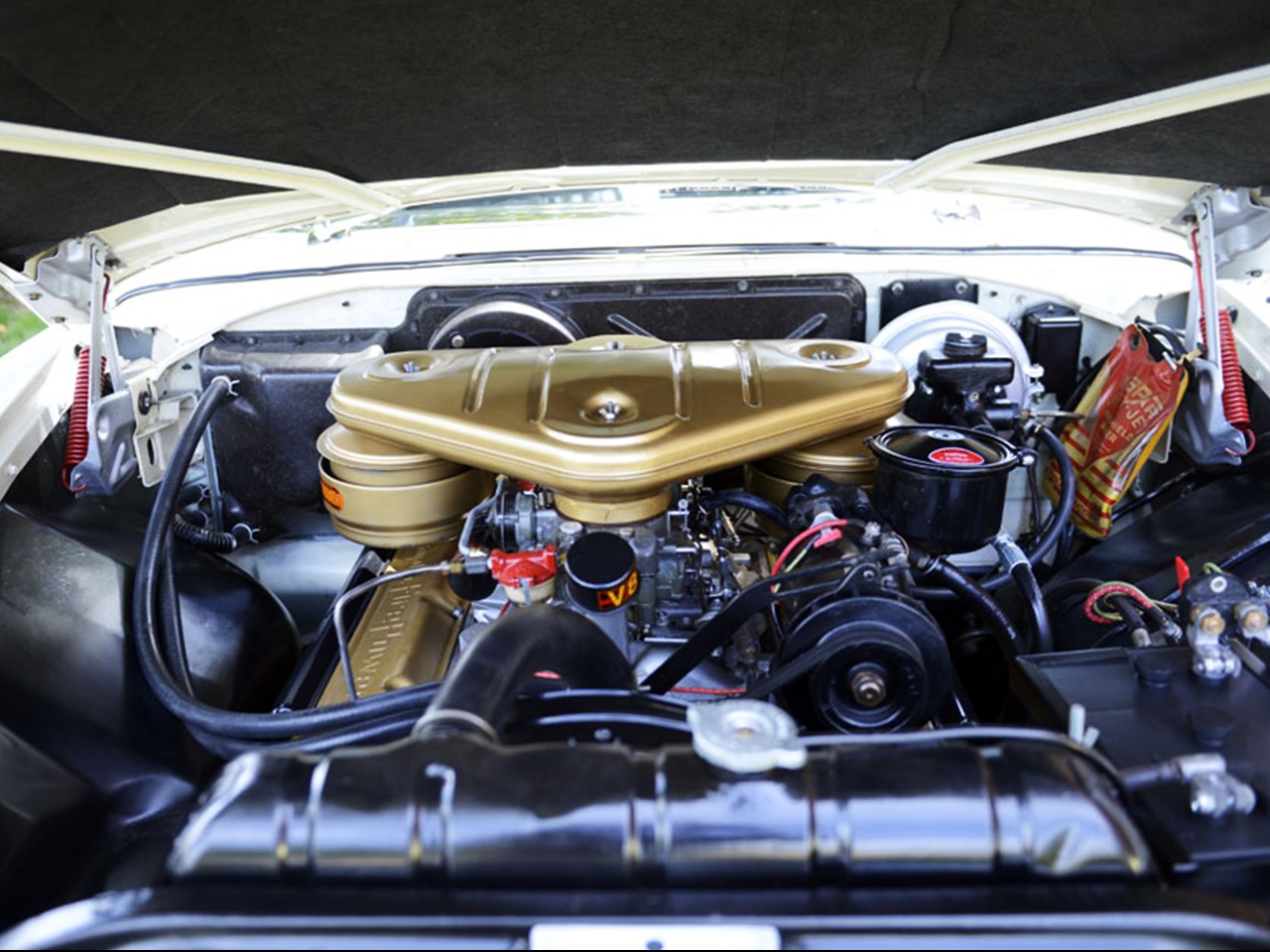 The 1955 C-300 and its prodigious power garnered 18 races and the overall NASCAR Championship in 1955 by the Carl Kiekhaefer racing team. This car ran the sand at Daytona Beach like the true trackstar it is as though it were running on asphalt. The C-300 dominated the NASCAR circuit as if it lived there. It flexed its muscles producing performance like no mere stock car could ever achieve. This car won an astounding 27 races in 1955.

Lee Petty and Tim Flock drove 300’s to victory, I am sure the mature readers remember these champs. The mid 1950s was a turning point for the automobile. Cars such as the 1955 C-300 paved the way for today’s performance cars, however; the classic performance cars kicked butt with raw torque-thrust. There was no such thing as aerodynamics, wedge shapes, or wind-cheating design – just pure unadulterated power. MOPARs ruled! The Chrysler 300 outdid the Corvette and the Thunderbird…flying past them as if they were standing still…and these cars are two-seaters! 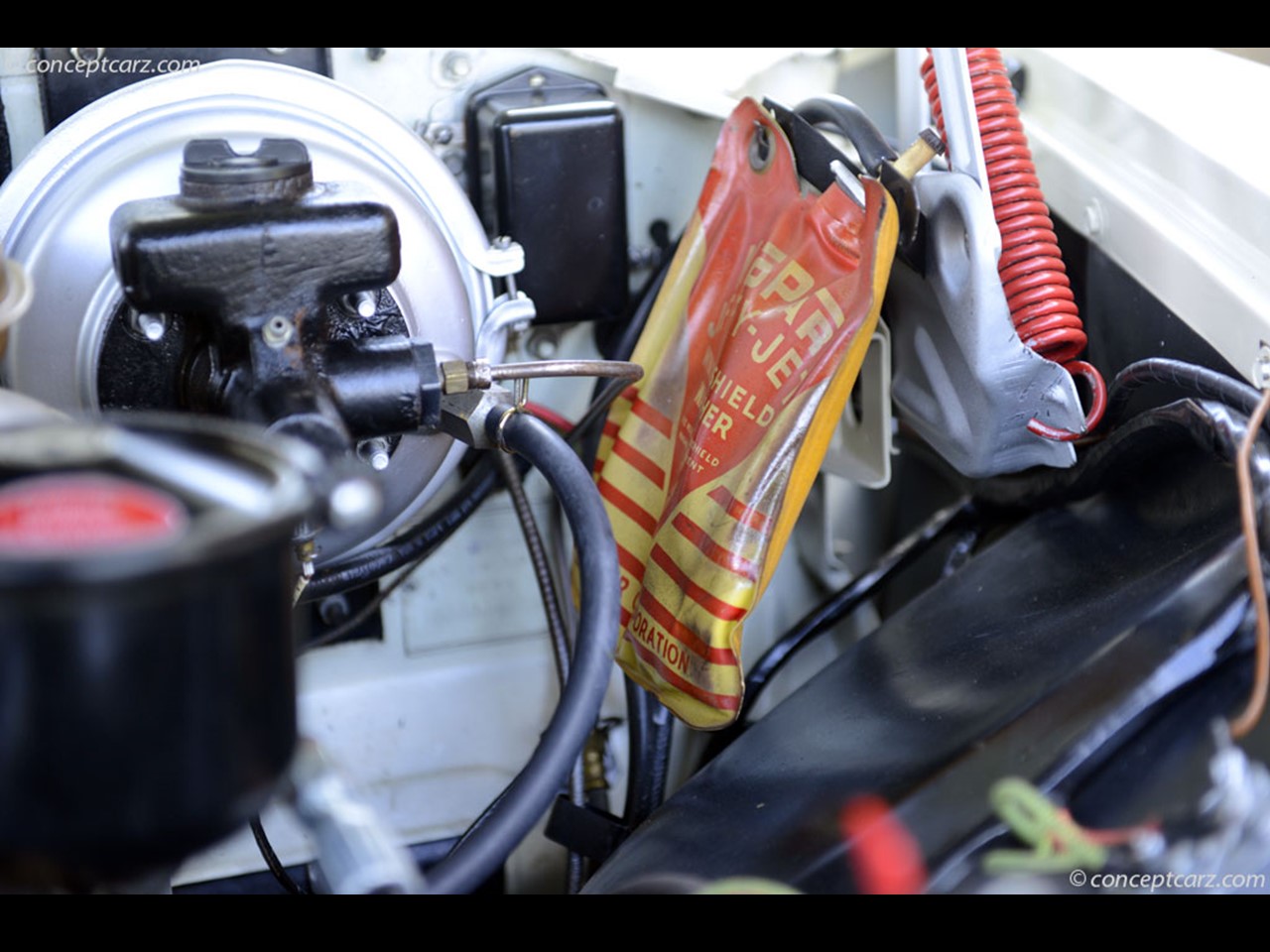 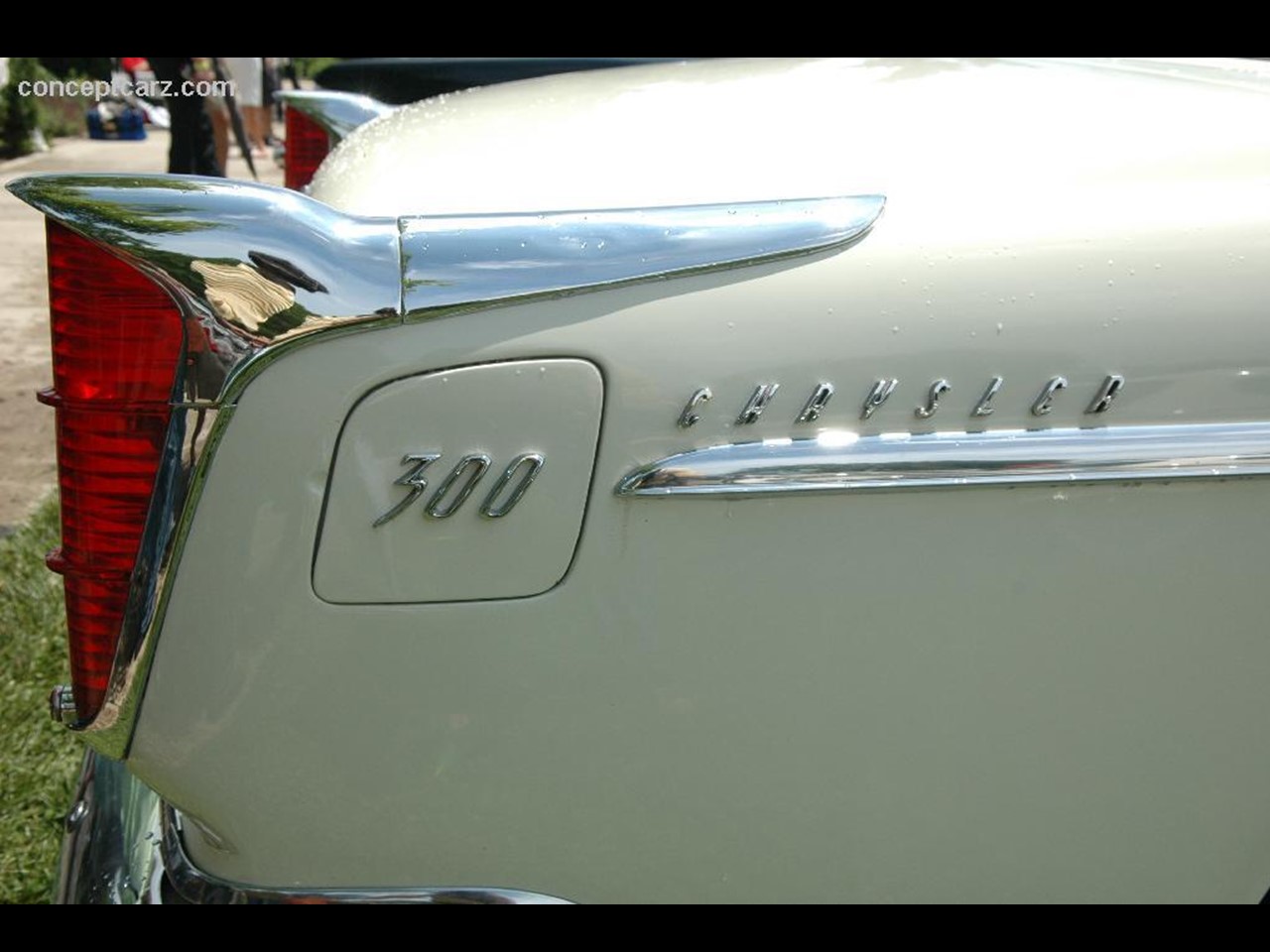 What’s the secret to the C-300’s formidable reputation? It’s the Hemi-head engine no one else could replicate. The C-300’s hemispherical combustion chamber has domed cylinder heads. This type of engineering dates as far back as 1901 when it was used in European race cars. The Hemi-head gives an efficient combustion chamber with minimal heat loss to the head and provides more room for larger valves. Flat topped pistons won’t work here as they yield too low a compression ratio unless there is a long stroke available. To obtain optimum compression, the piston crown is domed protruding into the heads at top dead center.

An engine’s combustion chamber is extremely important for high performance. The air/fuel mixture must be spot on for efficiency. The mission is to burn all of the gas in the cylinders, if there is residual unburned gas…that is wasted energy. You also want maximum cylinder pressure when the crankshaft is at the correct angle to get more bang for the buck. You need all the energy from the pressure. Heat is vital to the pressure therefore; you want to conserve as much as possible in the heads and cylinder walls. These are some of the variables of an engine’s design that control the amount of power extracted from each stroke.

The Hemi head produces higher pressure because the surface area of the chambers are smaller than flat head designs; thus, less heat loss. The valves of the Hemi head are larger maximizing the breathing. With the valves placed on opposite sides of the head, the larger valves can be used however; there is only room for two valves per cylinder. The hemispherical pentroof combustion chamber has the intake valve on one side and the exhaust valve on the other creating a crossflow. Air/fuel mixture enters one side and the exhaust exits the other side.

The combustion process relies on what’s known as flame propagation. The intake valves bring the correct air/fuel mixture into the chambers where the fuel starts to burn at the spark plugs, then the burning travels outward in a multi-directional manner. With the Hemi heads spark plugs in the middle of the hemisphere; the flame front has less distance to travel providing optimum combustion for efficiency and maximum power output. Gasoline engines utilize three popular combustion chamber designs: hemispherical pentroof, bath tub, and wedge.

The cylinder heads are designed to improve the turbulence of the air/fuel mixture. When this mixture is compressed between the pistons and the flat part of the cylinder head it condenses the gasses increasing their velocity. This is called “squish” – it creates a sudden turbulence of the air/fuel mixture as the piston approaches top dead-center, or the “squish clearance.” Because of the Hemi’s lack of squish; they need a higher octane gasoline to avoid what’s known as detonation which is engine “knock” and “pre-ignition” that can damage the engine.

The formidable Chrysler Hemi and its hemispherical chamber design have evolved through three generations. The eminent Chrysler FirePower V8 dominated the performance world scorching the tracks in the 1950s. Next, is the NASCAR-inspired 426 Hemi in 1964 which also blew the doors off the competitors without remorse.

The contemporary Hemi engines of this century yields five versions of the 5.7 litre engines that crank between 360 and 395 ponies with an astounding 529 – 552 Nm of peak torque. There is also a 392 CID 6.4 litre V8 cranking 410 horses with 576 Nm of peak torque. And if this isn’t powerful enough…enter stage left: the ferocious “Hellcat” that provides an enormous 707 hp with an earth-shattering 881 Nm of peak torque-thrust. Chrysler is still kicking butt with ferocious bullies the rest of the industry cannot touch –

The mighty Chrysler 300 inherits its name from what’s under the hood which cranks 300 horses. It was the most powerful production passenger car built in America for its day. This supercar has a speedometer that reads up to 150 mph…this car can achieve this and then some! It is a true luxury performance car…a bull in a tuxedo sums up its virtues.

This high performance behemoth is tuned to hold the road and accommodate its prodigious torque-thrust. If you have ever driven one of these you know exactly what I mean when I say these cars deliver awesome, jaw-dropping power! The 1955 C-300 is built upon a stiff competition type suspension with heavy-duty shocks, leaf springs and a front stabilizer bar. 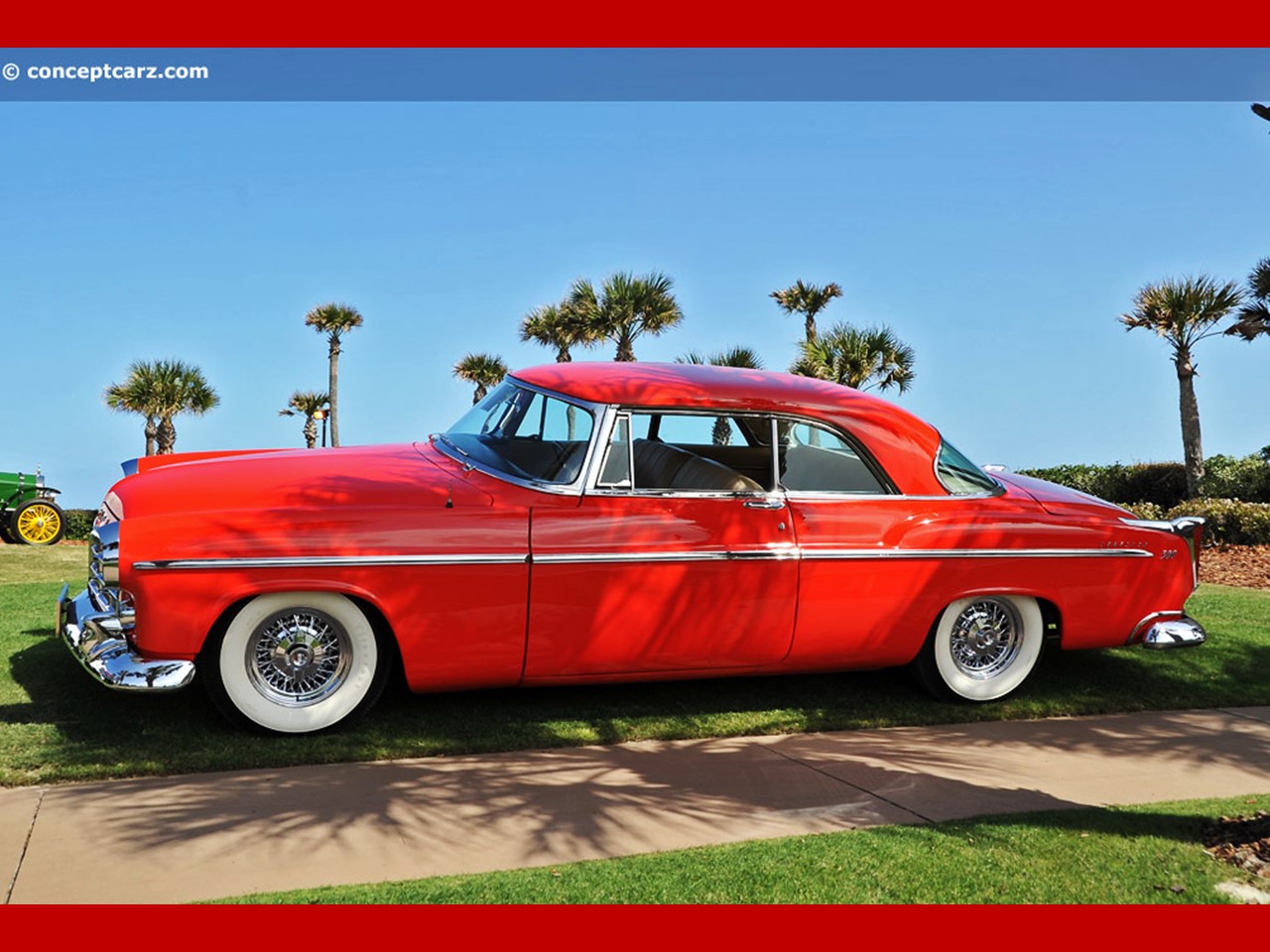 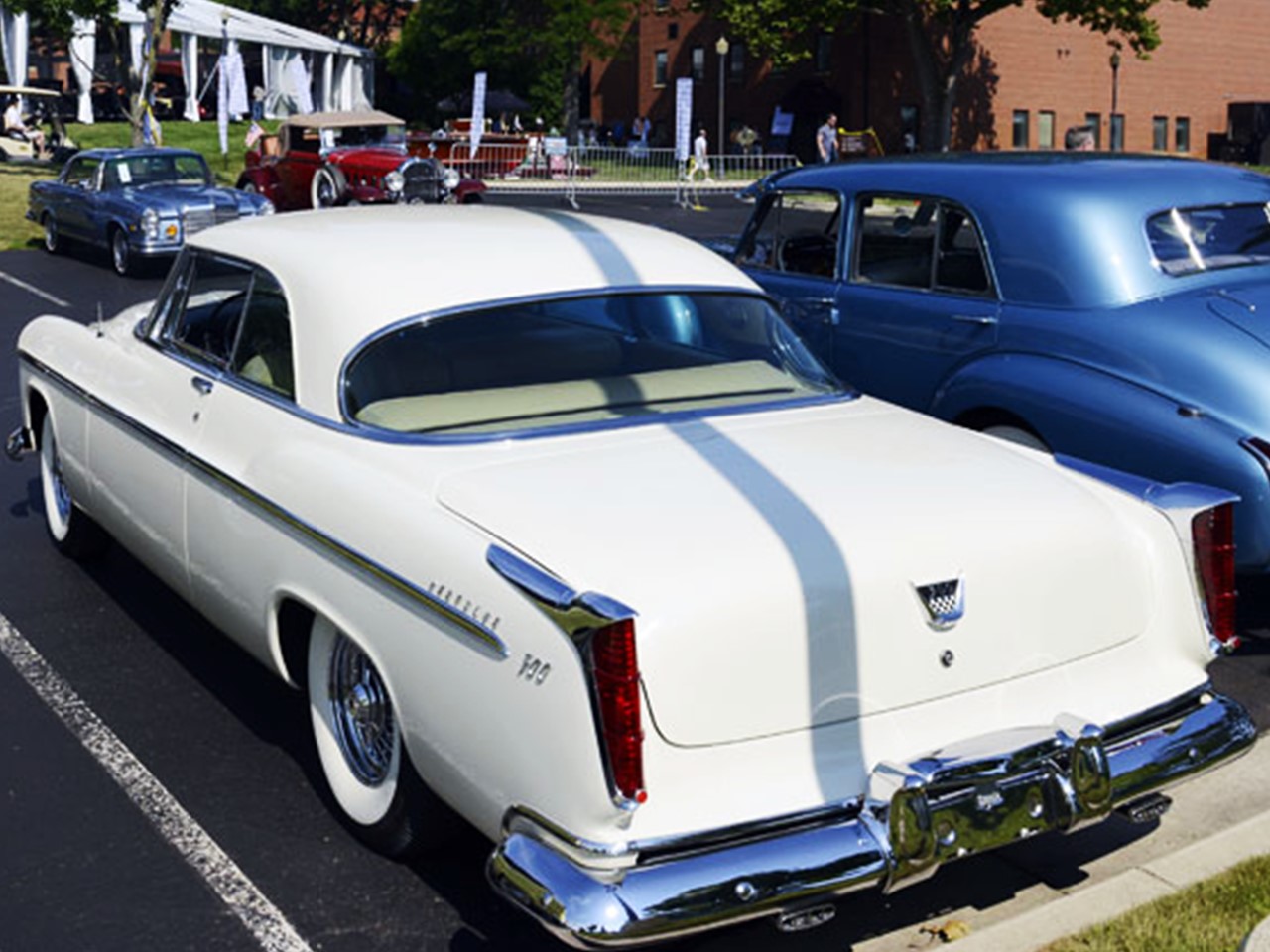 The 1955 Chrysler C-300 won the NASCAR Grand National title and the AAA Championship finishing first in its class at Daytona Beach – all in 1955. This was the most powerful production car in the world for its day. This is the poster child for NASCAR events winning 33 races. It was the only car in America cranking 300 horses at the time. MOPAR has always given more bang for the buck than the competitors. The ferocious Chrysler 300 Letter Series performance cars left an indelible impression in the history of performance cars and are among the first true American muscle cars. To purchase the ferocious 1955 Chrysler C-300…be prepared to shell out six figures…if you can find one for sale –

Special thanks to Conceptcarz, Wallpaper Up, and Mad4wheels for the use of these beautiful photographs of these extremely rare automobiles. 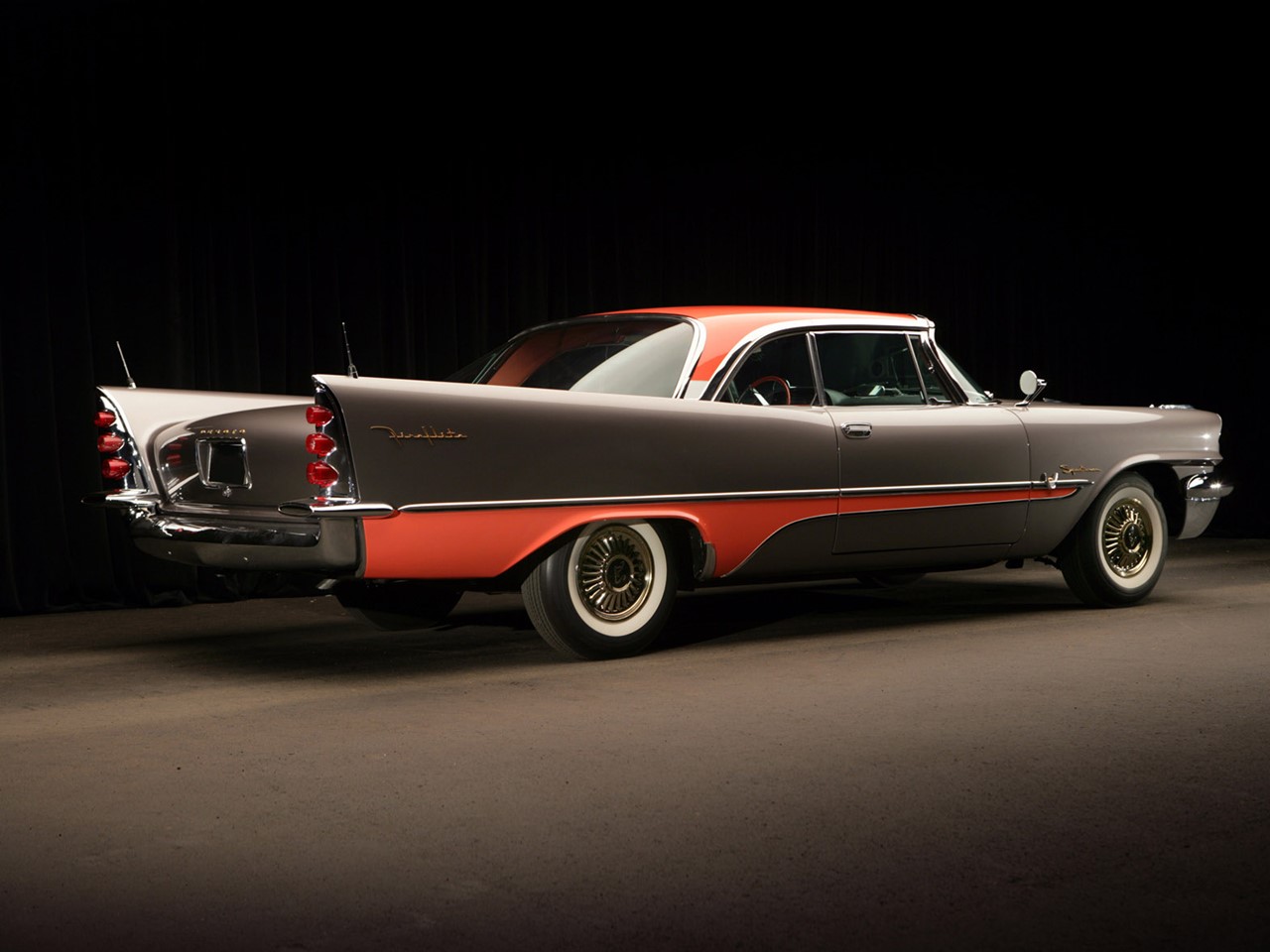 The DeSoto is another MOPAR champ 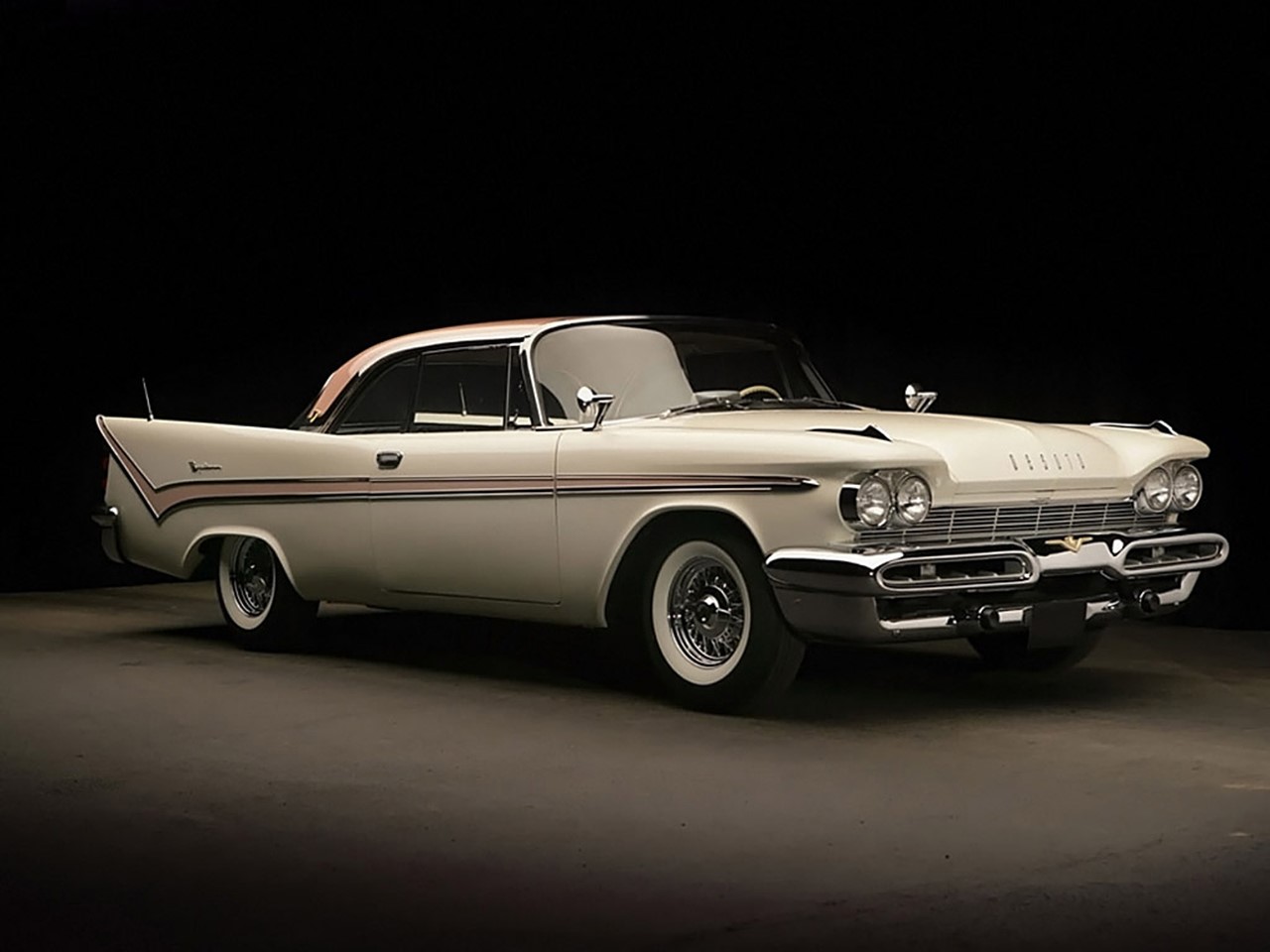 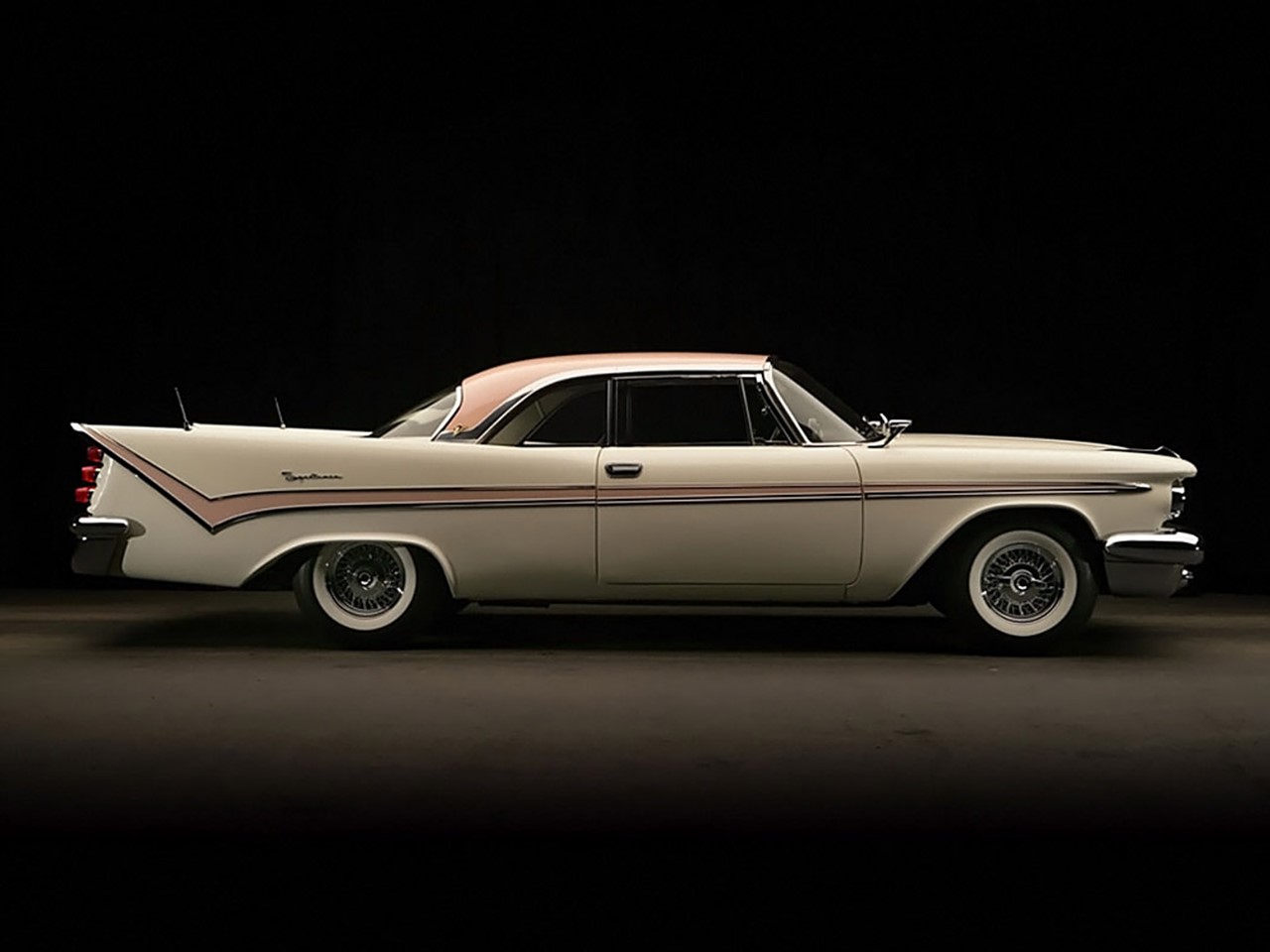