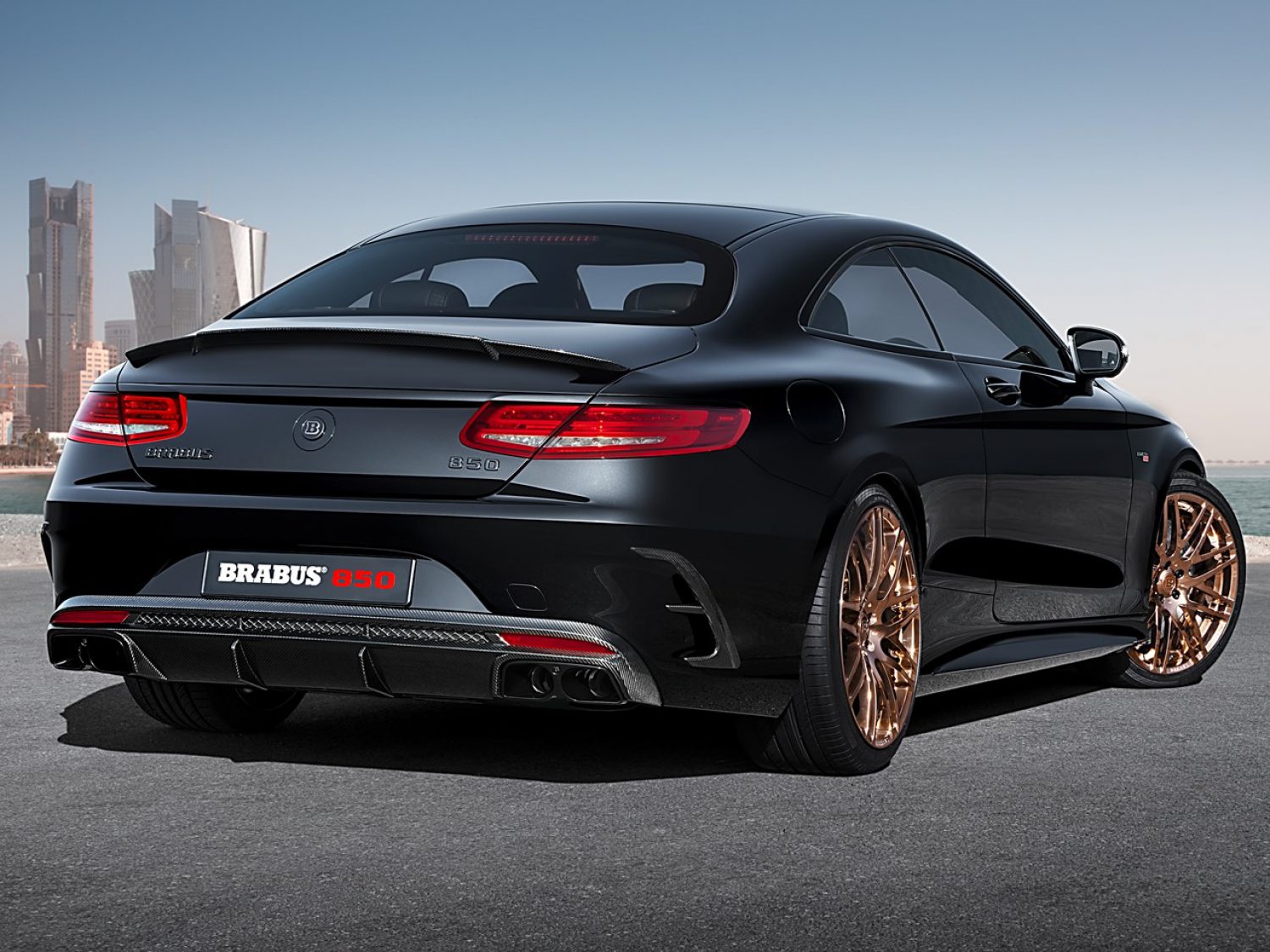 “The Ozzie & Harriet Nelson – Ward & June Cleaver Era” is a timeline including some of the fondest memories of really good times in America. These were the days when Friday nights were all about high school football games…and those drive-in restaurants with “curb-service!” We would bring out the rides with all those white-wall tires…and go out cruisin’ like we used to do. We’d get “suited-down” and set the town on fire – jump out our seats and let the music pull us through! The car with a little bit of “Razzamatazz” is the 1957 Chrysler 300C.

The “Beautiful Brute” is considered the most beautiful and highly desired of all the Chrysler 300 letter series personal luxury performance vehicles. Power…presence…performance, and prestige was delivered in one svelte swoop – the Chrysler 300 letter series cars blew the doors off of the competition. Virgil Exner, chief design stylist…created automotive works of art. “Suddenly…It’s 1960” was one of the ad campaigns used by the Chrysler Corporation for the 1957 model year. It boasts Virgil Exner’s “Forward-Look” which advanced automotive design to a higher standard. The Forward Look gave the Chrysler brand an all-new identity…leaving the past to history – 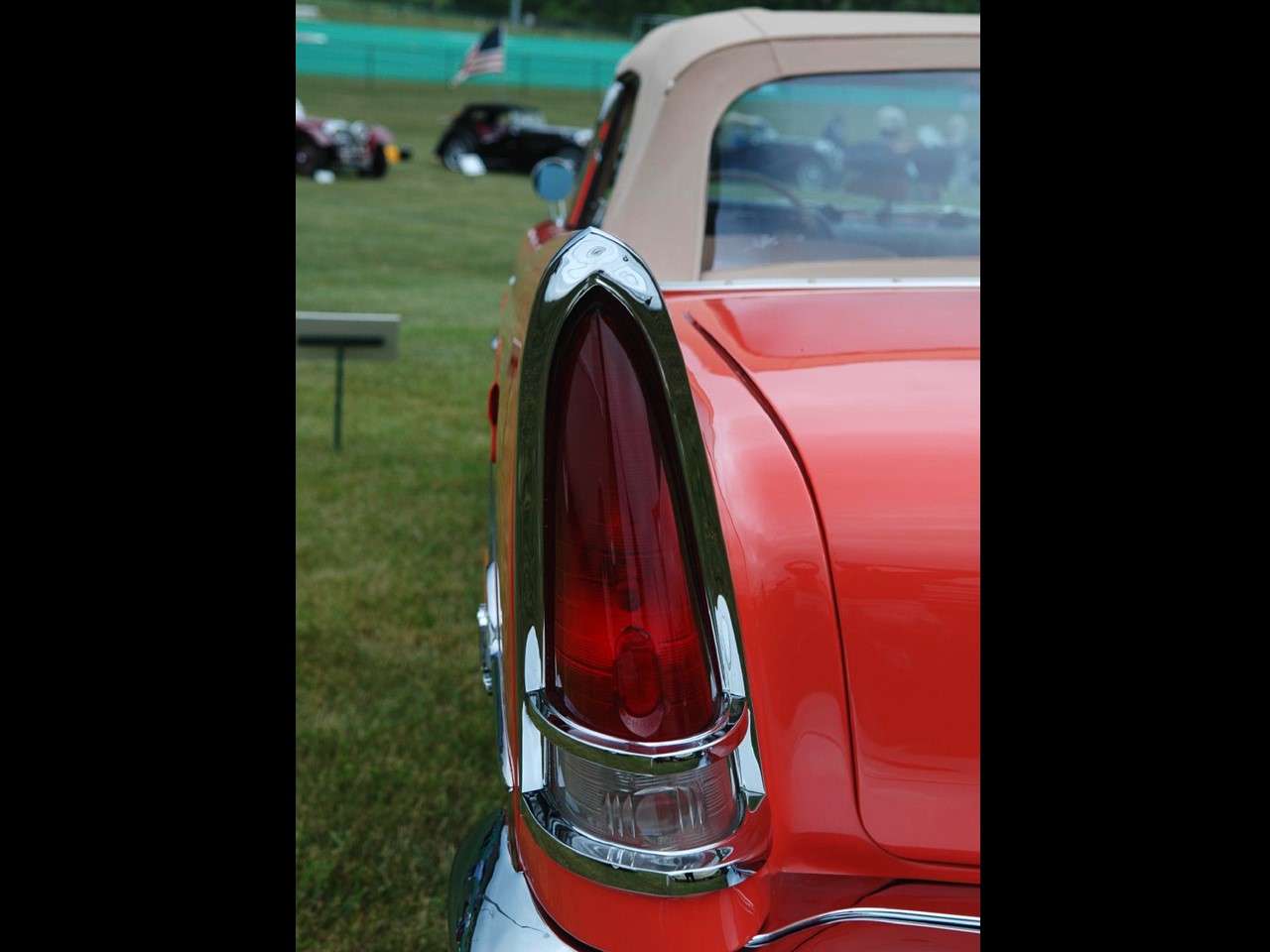 The Chrysler 300 letter series was formidable by nature. The “tail-fin wars” of the 1950s were going strong and Chrysler had GM tit for tat between the leadership of Virgil Exner and Cadillac’s Harley Earl, chief design manager for General Motors. Exner’s Forward Look gave birth to the magnificent Chrysler 300C for the 1957 model year. This supreme achievement in motoring yielded the highest horsepower in the industry for a production vehicle for its day.

All formidable Chrysler 300 letter series cars won virtually every race they were entered into…delivering awesome, jaw-dropping performance unmatched in the automotive industry. If you looked up into your rearview mirror and saw the ferocious trapezoid grille…you moved over – FAST! The Beautiful Brute was also known as the “Banker’s Hot Rod.” Virgil Exner’s Forward Look incorporated his “Flight Swept” styling evolution which set a trend in superior automotive design. 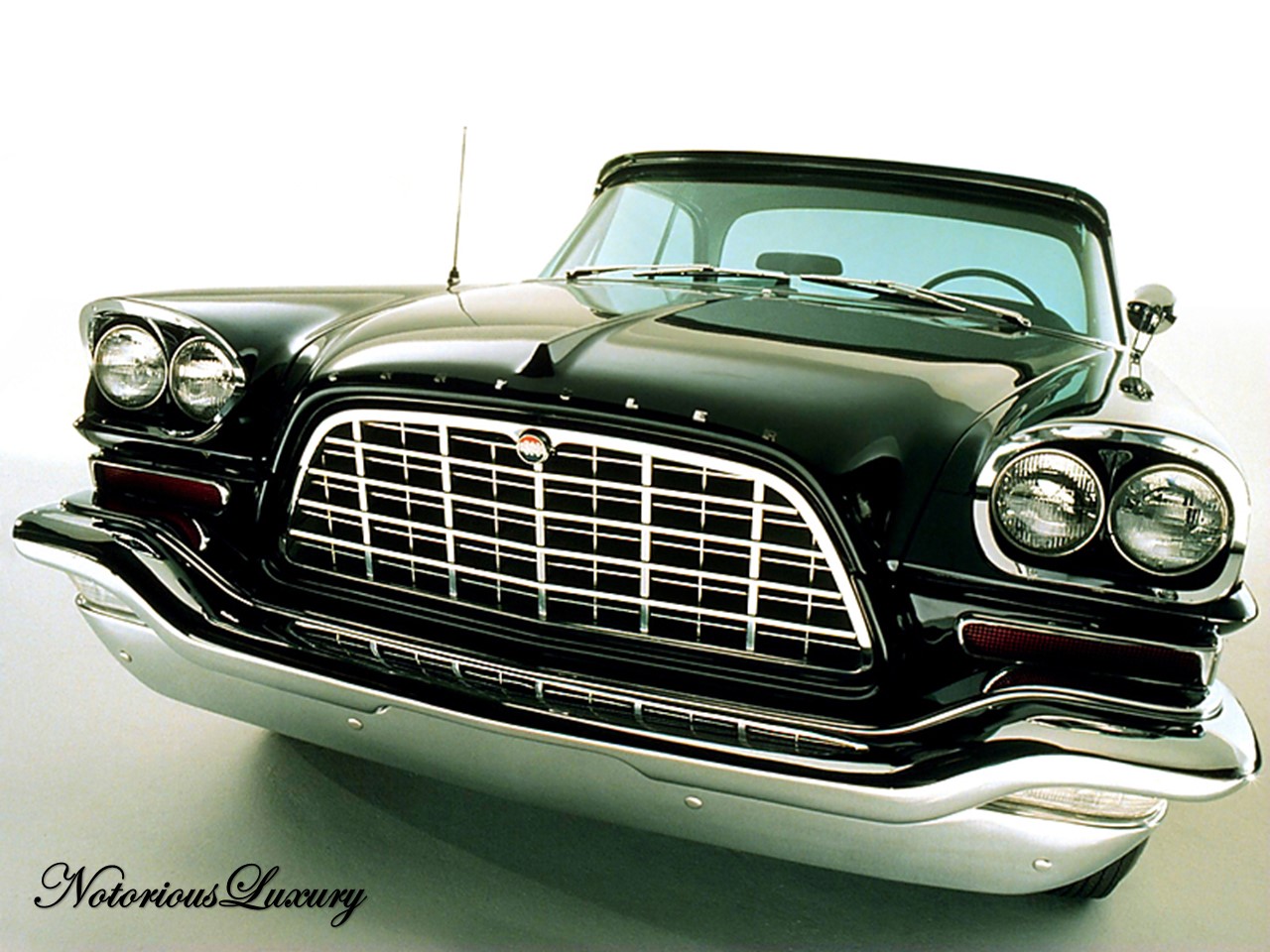 A highly styled silhouette augments its Forward Look. The graceful beauty is one dashing uncluttered sweep from its stylish trapezoid grille to the daring upswept tail fins. Virgil Exner designed some of the world’s most beautiful automobiles during his tenure with Chrysler…the 300C is no exception. His Forward Look took the automotive industry by storm from 1955 until 1961. It was this man who changed Chrysler’s stodgy, outdated, old-fashioned image – to aesthetically gorgeous examples of automotive art which projected a glimpse of the future.

The influence of Italian Ghia styling is apparent in the Chrysler 300C. Throughout the 1950s, Exner partnered with Luigi Segre, who was associated with Carrozzeria Ghia S.p.A., an upscale Italian automobile coachbuilder. It was Virgil Exner that introduced the design concept theory to Chrysler. When he came onboard, Chryslers were fashioned by engineers and not designers…this is why they looked so clunky and blocky. The advertising campaign for Chrysler’s 1957 model year epitomized the brand with the slogan “Suddenly…it’s 1960.” In June of 1957, Virgil Exner and his design team won the Industrial Designers’ Institute’s Gold Medal Award for their automotive design excellence. 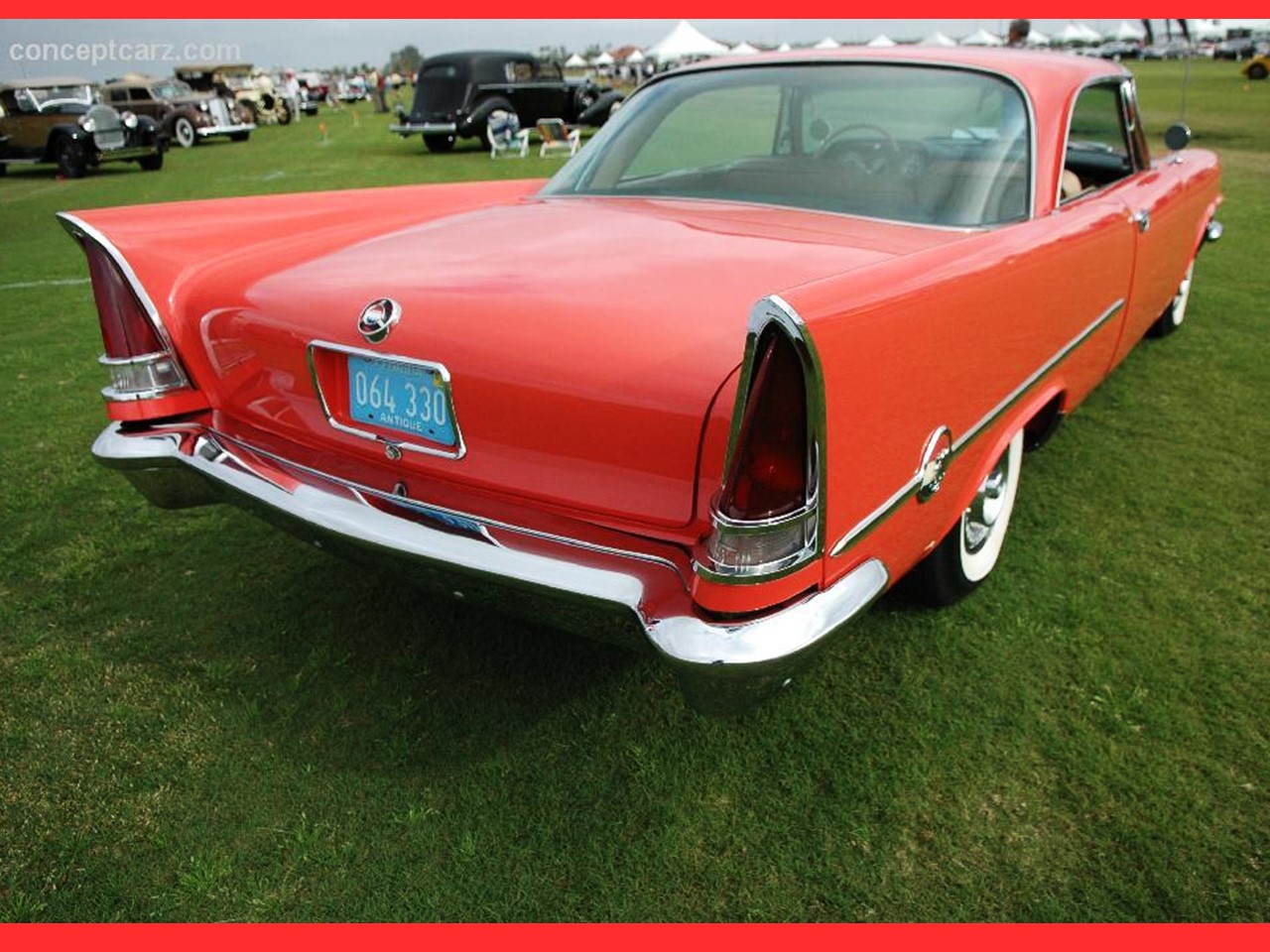 Virgil Exner’s tour de force rocked the automotive industry with style. The 1957 Chrysler 300C showcased his talent. His designs used lowered rooflines with sleeker more aggressive silhouettes that featured long hoods and short rear decks. The 300C’s towering tail fins are not only beautiful but also include aerodynamic benefits. This design was tested in a wind tunnel at the University of Michigan during the car’s design engineering phase. The small 14” wheels created the necessity of two small air ducts underneath the headlamps which cool the brakes.

Virgil Exner’s use of compound curved auto glass is the first application of this type to be incorporated into a production passenger car. Automobiles such as the 1957 300C brought Chrysler to the forefront of automotive design. It’s the restrained use of ornamentation that augments the 300C’s refined, luxurious appearance. If you plan to add one of these to your collection, be prepared to shell out six figures for a convertible and an equally hefty price for a hardtop. 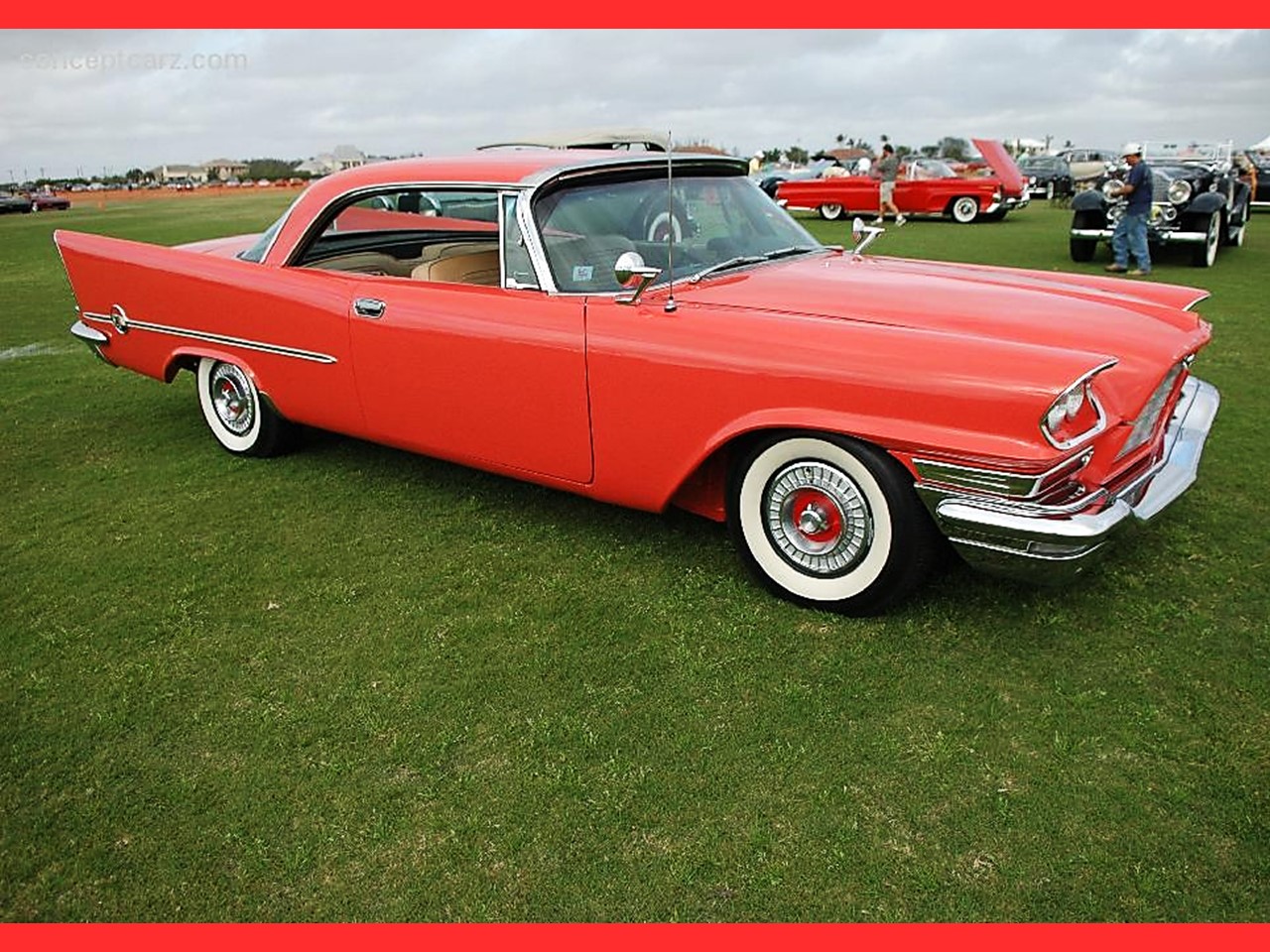 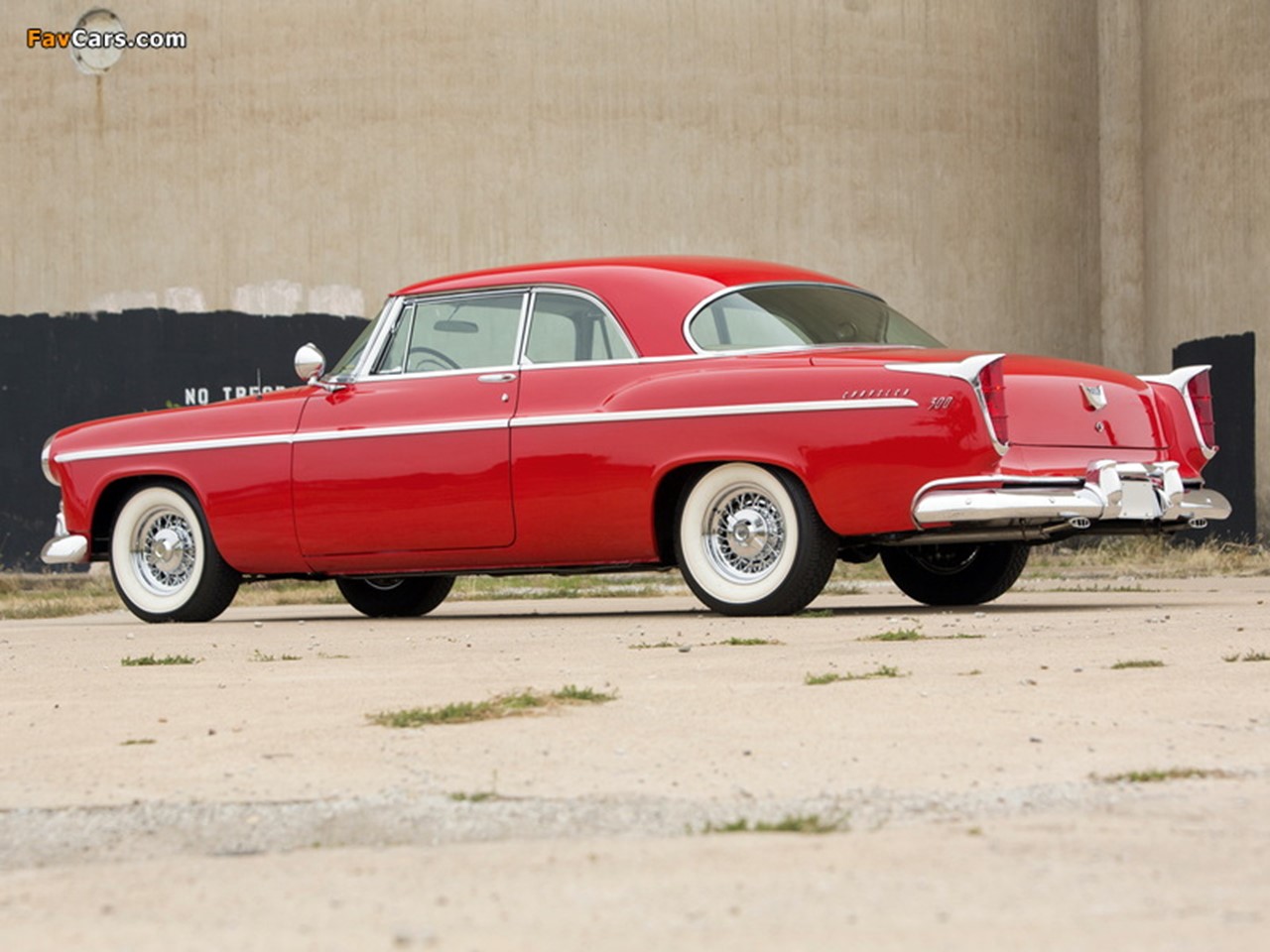 The Chrysler 300 letter series were built from 1955 until 1965. They are considered eminent high performance personal luxury automobiles. They were known as “America’s Greatest Performing Cars.” This formidable reputation began with the 1955 C-300 garnering both AAA and NASCAR stock car championships. The 1956 300B was a ferocious NASCAR champ with 21 first-place wins in the Grand National races…which brings us to the enigmatic 300C for 1957.

It was the most robust version to date. This potent example of MOPAR craftsmanship is one of Virgil Exner’s finest works of art – And lest we forget “Big Daddy” Dyno Don Garlits and the magic he worked on the 392 Hemi. It was he that broke the 170 mph barrier in 1958 with his Swamp Rat dragster! A stock 300C ran 145 mph at Daytona Beach in 1957. Motor Trend Magazine named the ferocious 1957 Chrysler 300C as car of the year. The potent 300C scorched every track it visited leaving its indelible impression on the competition! 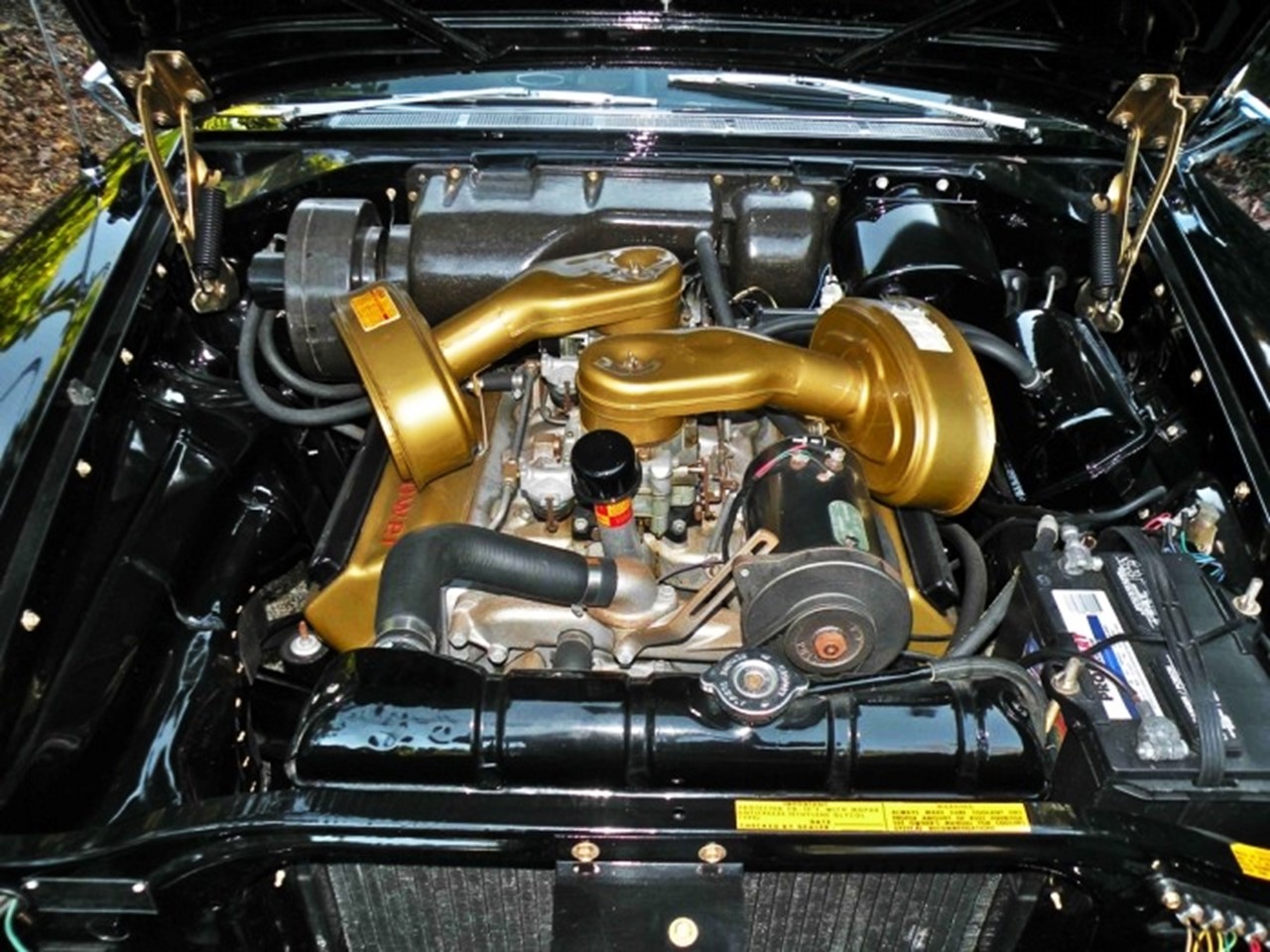 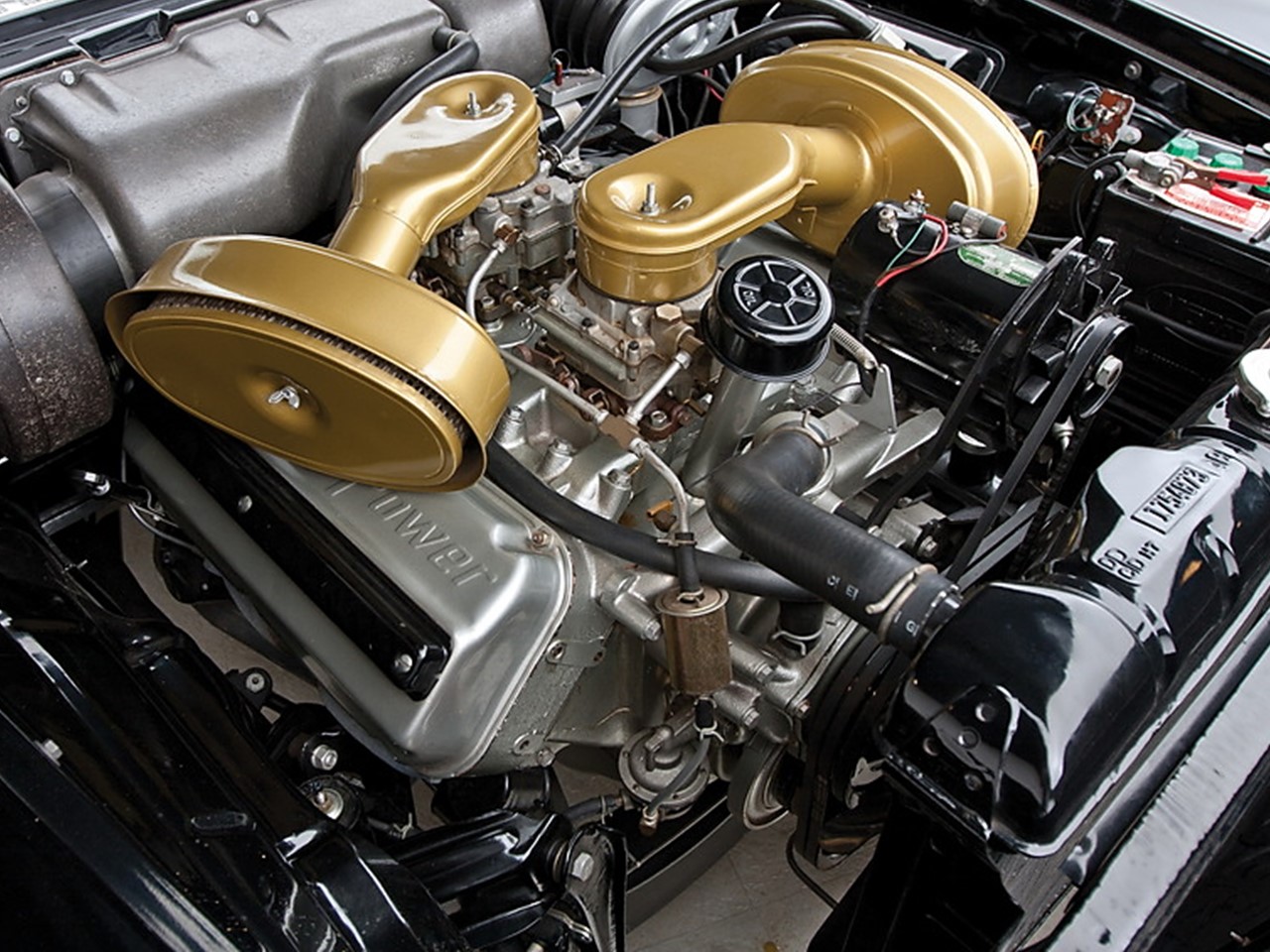 And if this wasn’t enough power to suit you; the optional engine package reworked the Hemi to crank out 390 hp @ 5,400 rpm producing 570 Nm of peak torque @ 4,000 rpm. I’ll put it this way…all the competitors saw was the 300C’s rear bumper! We aren’t talking about the mamby-pamby power to weight ratios like today’s make believe performance cars…the 300C produced prodigious torque-thrust. This high output option was captioned: “The optional engine is not recommended for the average 300C customer; the longer duration high-speed camshaft increases idle roughness and reduces low-speed engine performance.” Power steering and power brakes were not available with this option. 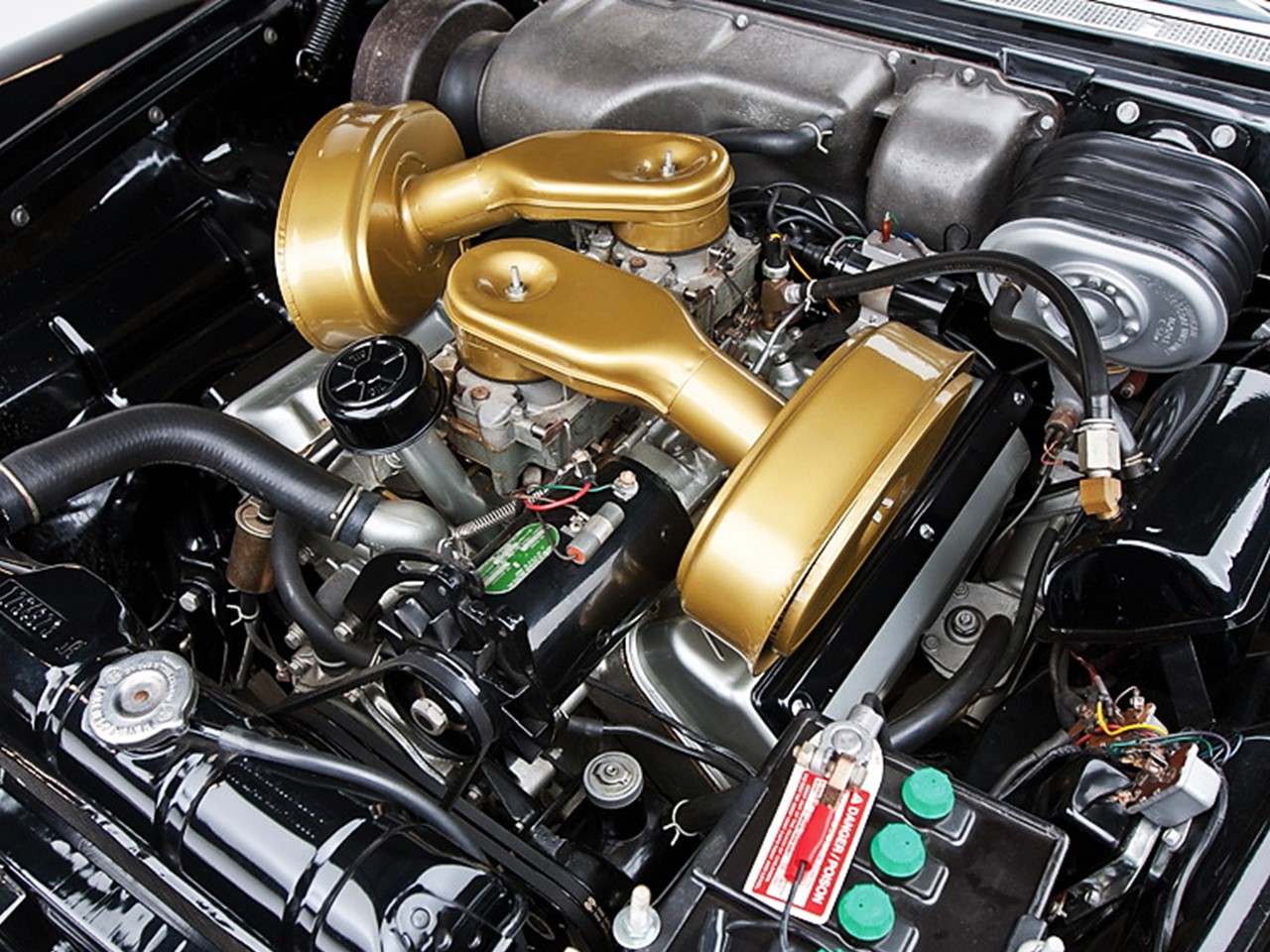 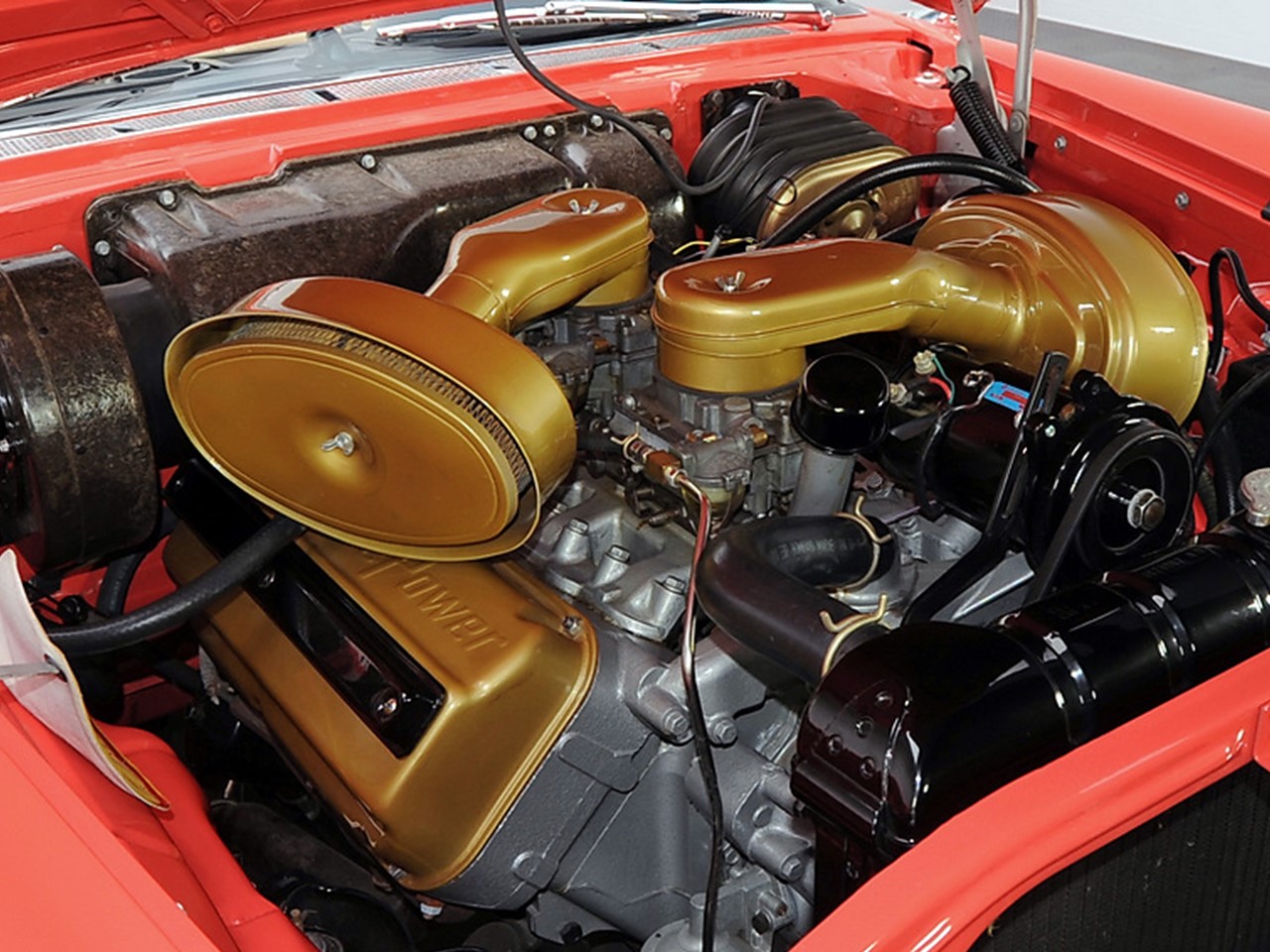 The high performance chassis package includes large diameter exhaust pipes with low back pressure, and twin leading shoe front brakes with 9.00 x 14” Goodyear Blue streak nylon racing tires mounted on wider rims –ummmm! The new “Torsion-Aire” suspension aided this package with angled upper and lower control arms which reduced dive under severe braking. Only 18 were built with this package. It won the Flying Mile at Daytona making it the fastest American car for the third straight year in Class 7.

When you take into consideration the weight of this humongous vehicle with a cast iron drive train…these times are awesome. If you look closely at the 300C’s silhouette, you can see how Virgil Exner sneaked in a wedge shape discretely – one could say, the 390 hp 300C bitch-slapped the entire automotive industry in both looks and performance –

This is the first year offering the 300 as a ragtop. It used a massive cross based frame to compensate its topless stature making it perform as well as the stiffer bodied hardtops. The Chrysler 300C was available in Cloud White, Gauguin Red, Parade Green, Copper Brown, and Jet Black. The interior was finished in a neutral tan trimmed with the finest cow hide leather. 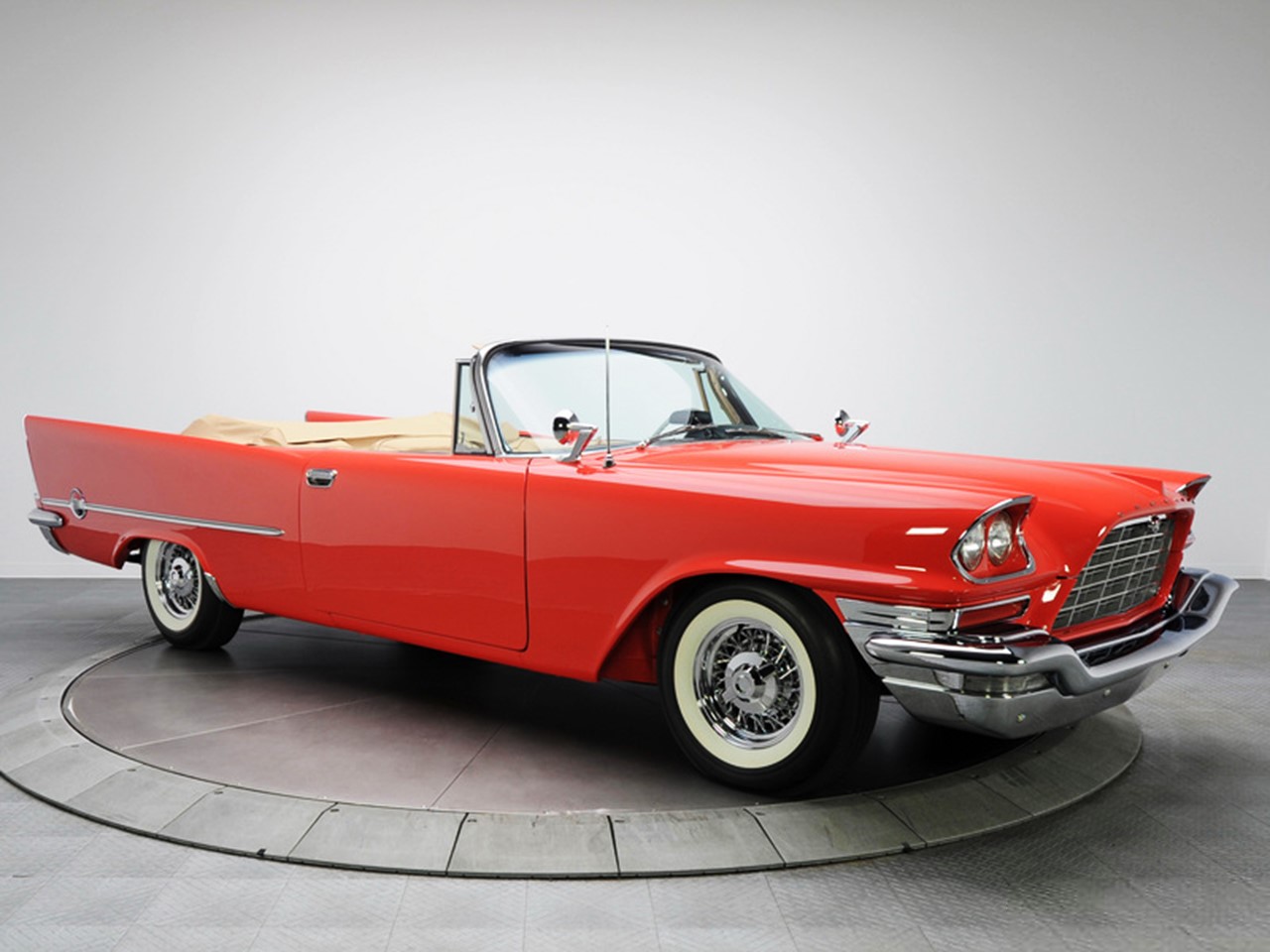 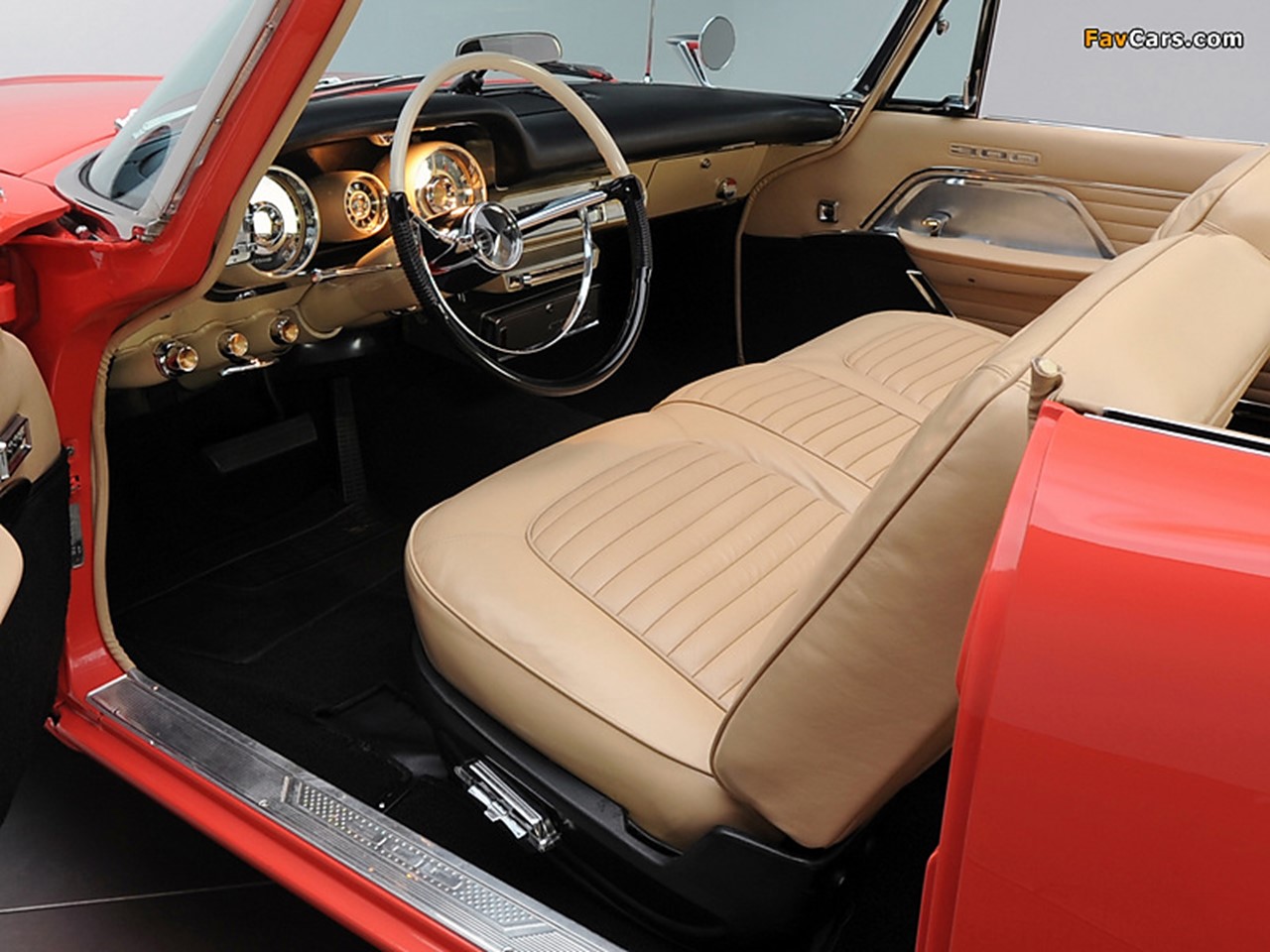 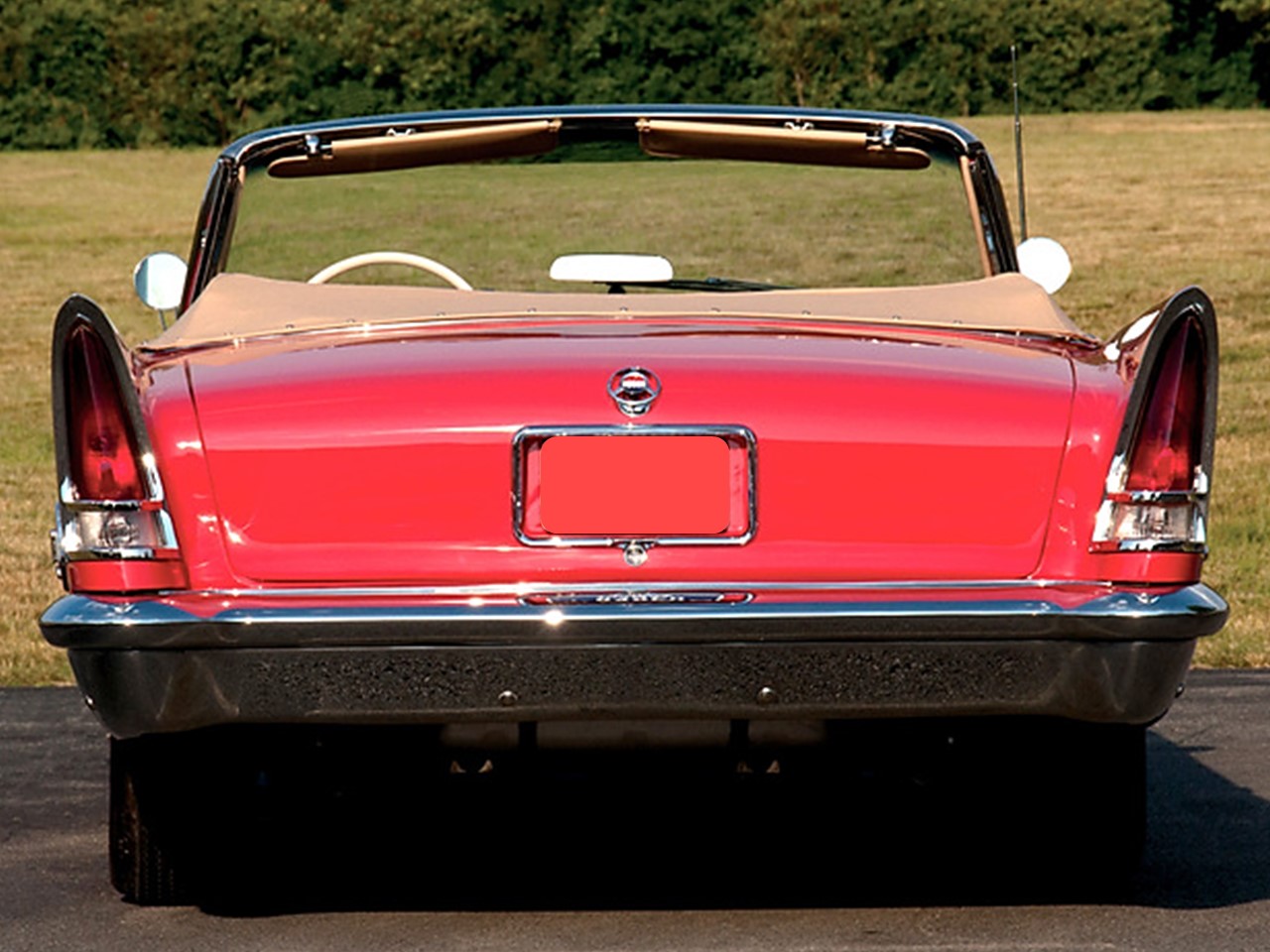 The 1957 Chryslers used a new patented “Torsion-Aire” suspension. This system greatly lowered the car’s center of gravity. The Torsion-Aire suspension is independent up front utilizing torsion bar springs. Oriflow shock absorbers were fitted all the way around. This type of shock absorber gives an exceptional ride that gas-charged shocks cannot replicate. They provide a greater damping effect.

The rear suspension uses Chrysler’s tapered-leaf springs with interliners and rear axle strut. The 300C has a hypoid type rear axle. It is fitted with Chrysler’s new for the day “Total-Contact” hydraulic braking system which included power brakes and independent parking brake. It is fitted with a Hotchkiss rear drive system. The 1957 300C is built as body on frame construction. It has the luxury length of 219.2” and is 78.8” wide riding upon a long 126” wheelbase. The 300C is an extremely large front engine rear drive vehicle. 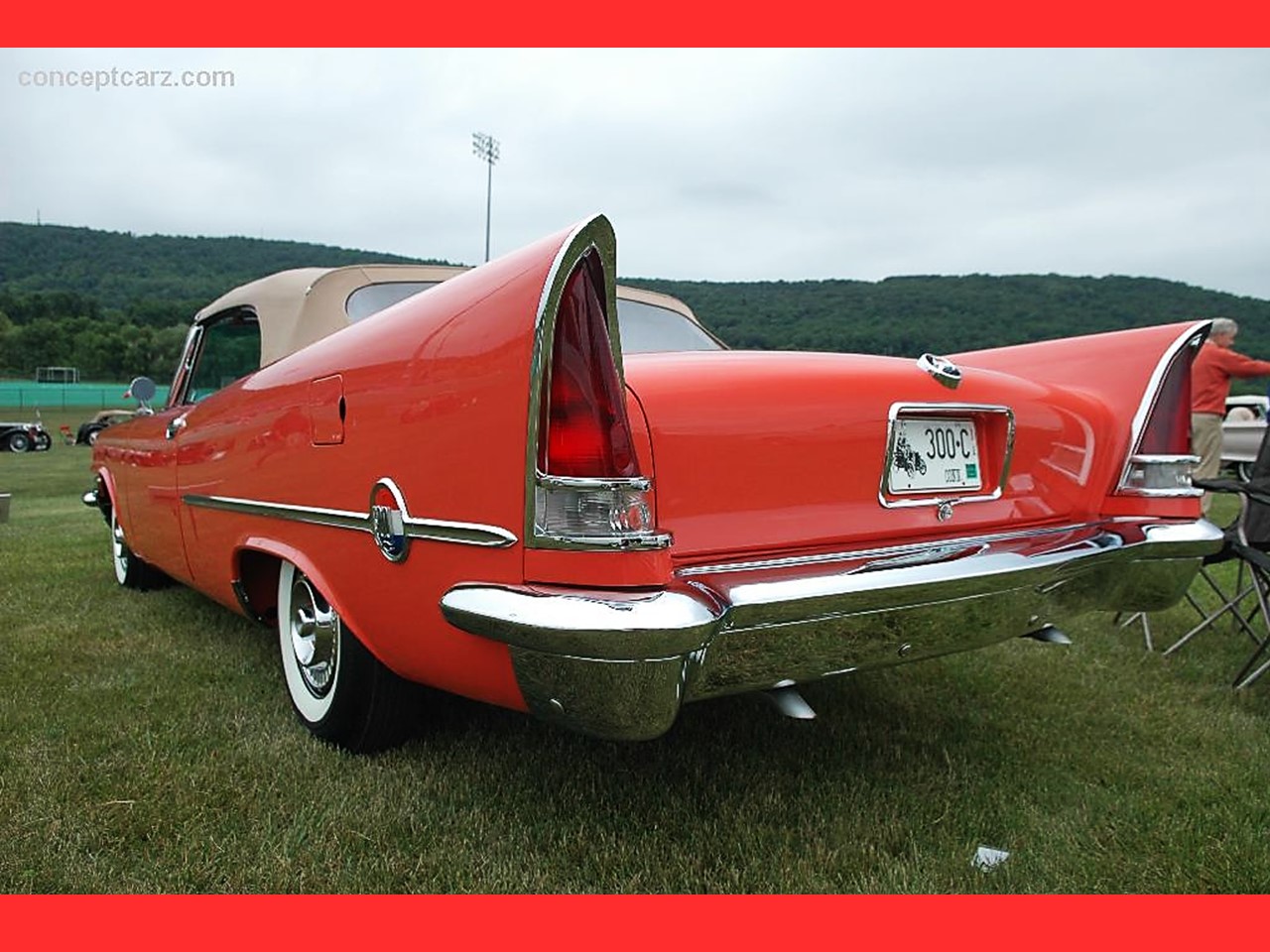 The 1957 Chrysler 300C featured luxury appointments in the style that made the brand famous. A Chrysler motorcar was one of the most luxurious automobiles of the 20th Century. The resplendent interior featured upscale jet-age appointments. The push-button transmission controls were a fascination to many. The rearview mirror is mounted to the center of the dash, a little odd but it was part of the 300C’s demeanor. The interior is absolutely enormous and rivals your guest room at home. Full leather trim was standard. The “Beautiful Brute” as it was referred to affectionately is one of the first ferocious domestic muscle cars.

The interior reflects is luxury sport nature…it’s the best of both worlds. The padded safety cushion dash is an industry first. The fabulous letter series cars were not mere mass-produced vehicles; they were the best Chrysler built for the day as limited editions. The 300’s technically were a luxury sport version of the New Yorker series. The only color available for the interior was tan, for quality control and styling continuity. 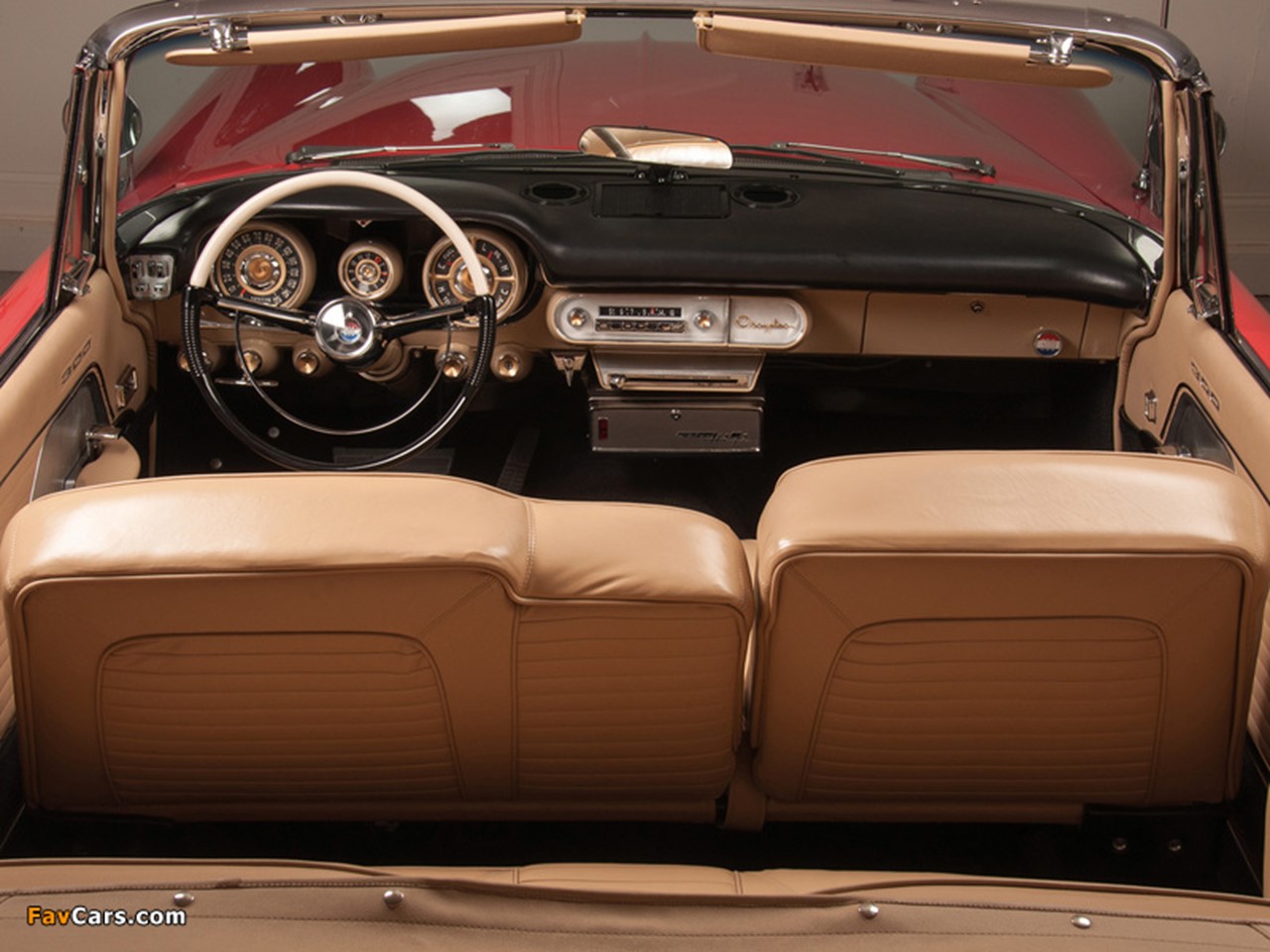 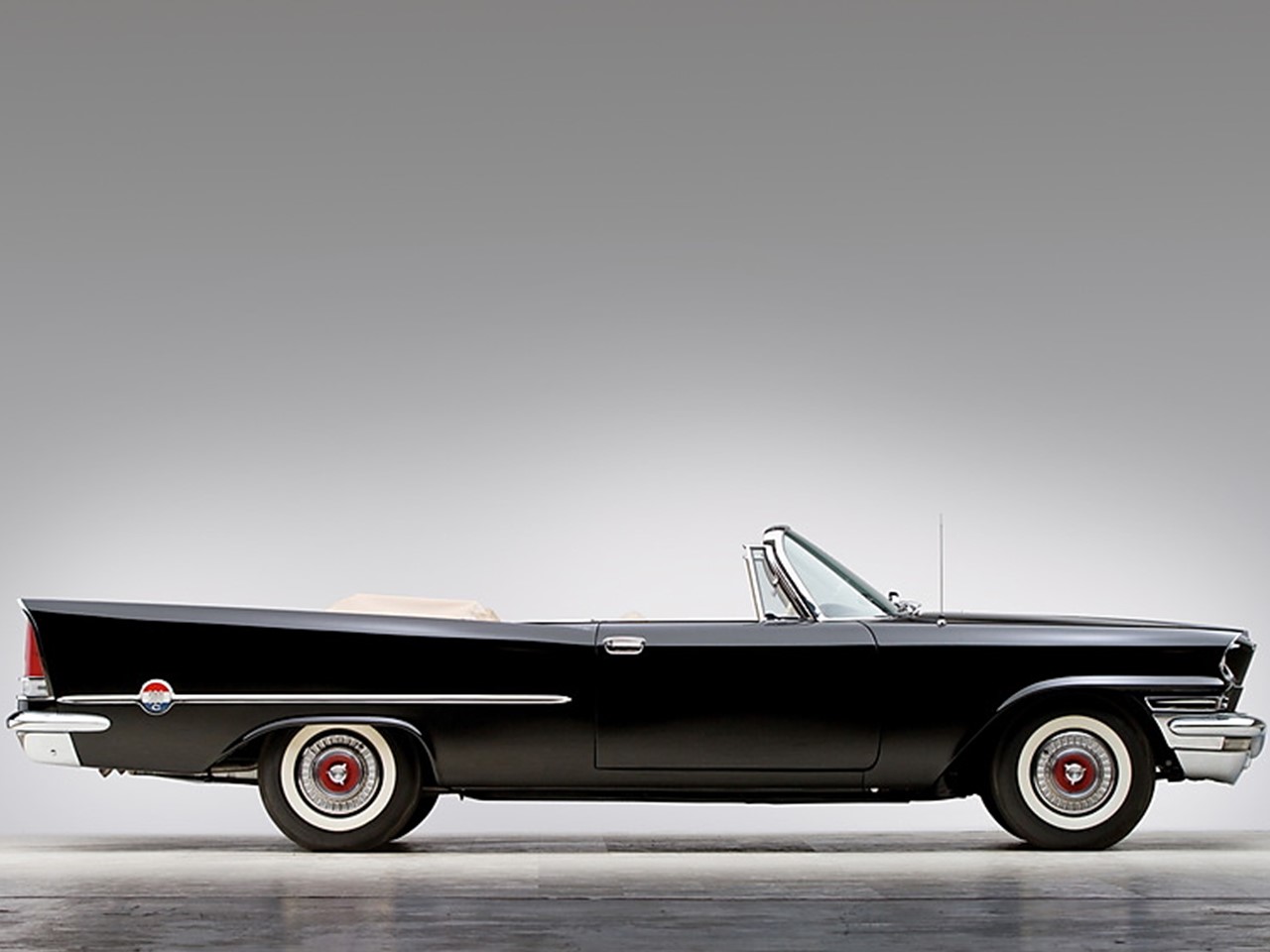 The 1957 Chrysler 300C roamed the asphalt with power and prestige…back in the good old days here in America that I affectionately refer to as the “Ozzie & Harriet Nelson…Ward & June Cleaver Era.” These were extremely good times when we could have fun for less than a buck. The 300C is one of Virgil Exner’s automotive masterpieces. Behind the daring trapezoid grille lurked the formidable 392 CID Hemi-head V8 engine…a fire-breathing, asphalt scorching power behemoth.

The 1957 Chrysler 300C left an indelible impression in the world of high performance cars…it audaciously bitch-slapped the entire automotive industry with savoir-faire in a totally avant-garde manner. Whether one chose the elegant hardtop coupe or the ultimate open tourer…one moved with aplomb! The “Banker’s Hotrod” is considered the most beautiful and highly desired of all the Chrysler 300 letter series models. As far as the competition was concerned…they never really got to see what the 300C looked like up close…all they saw was its rear bumper as it passed the finish line…as they ate its dust –

Special Thanks to Fav Cars.com, Wallpaperup, And Conceptcarz for the use of these beautiful photographs.

Now this is a rare treat courtesy of the Chrysler 300 Club International…the 1957 300C with single headlamps. The quad headlamp treatment was actually illegal in some states here in the USA in 1957, the quad version became legal in all states in 1958. 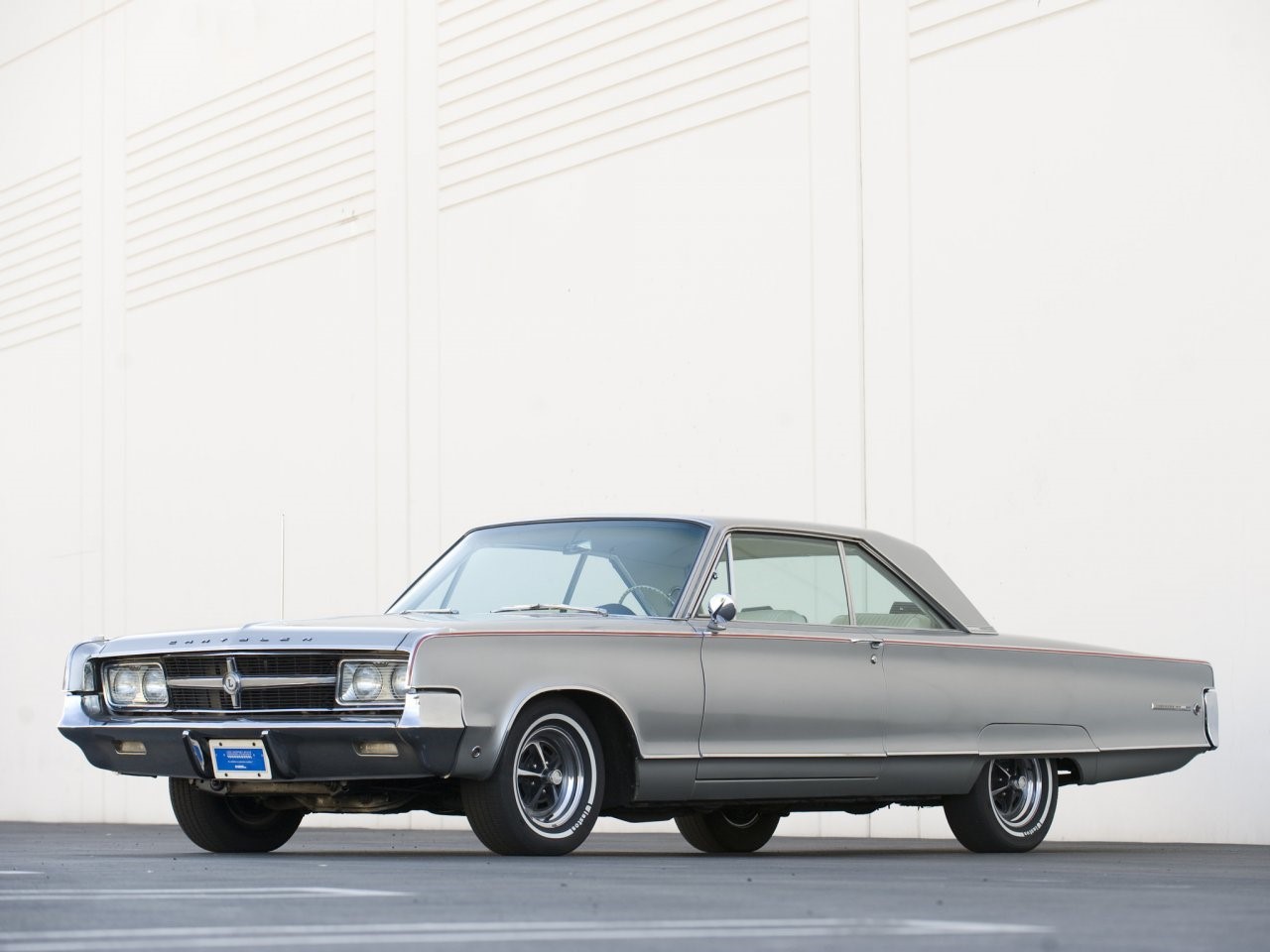 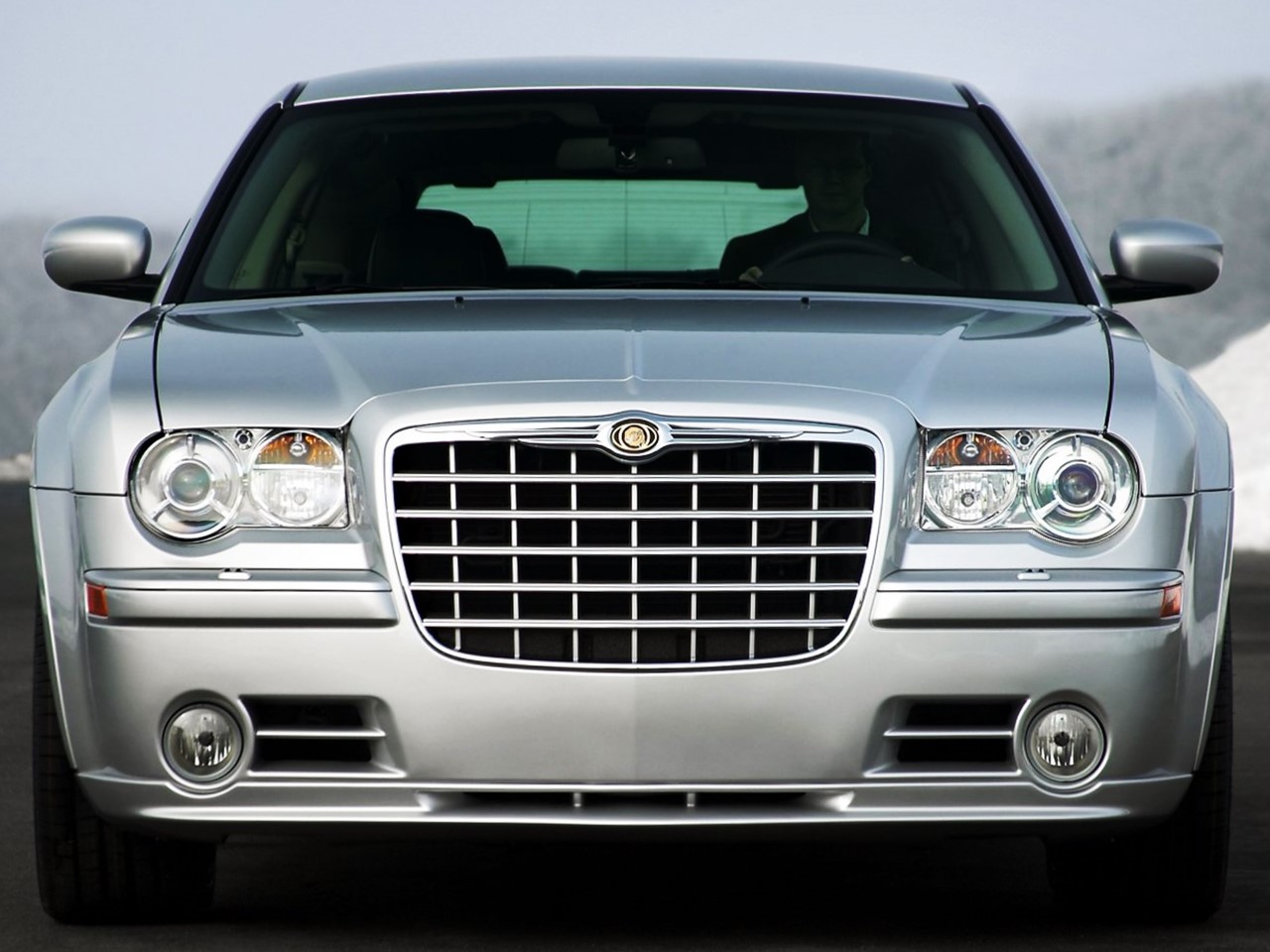 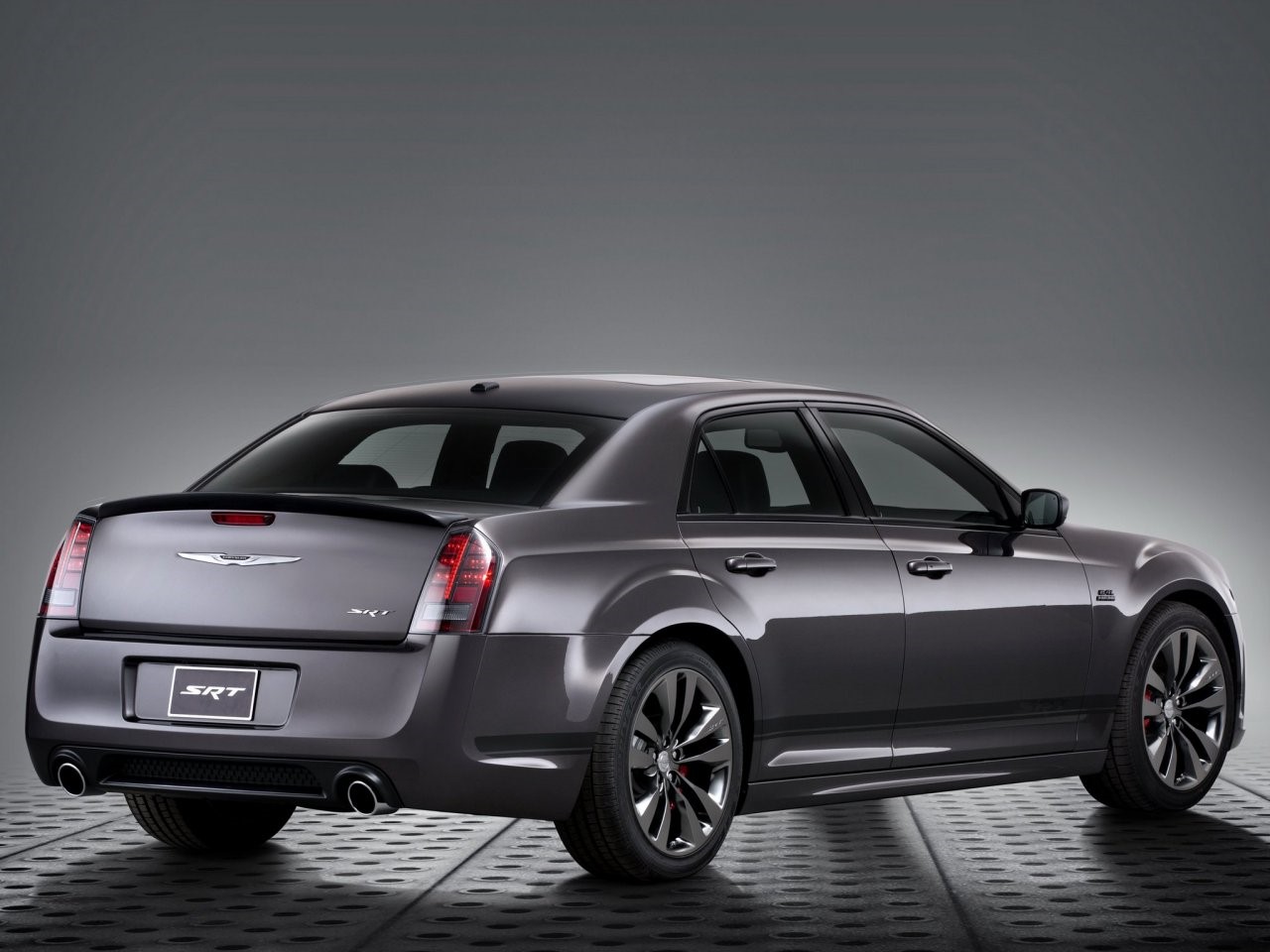 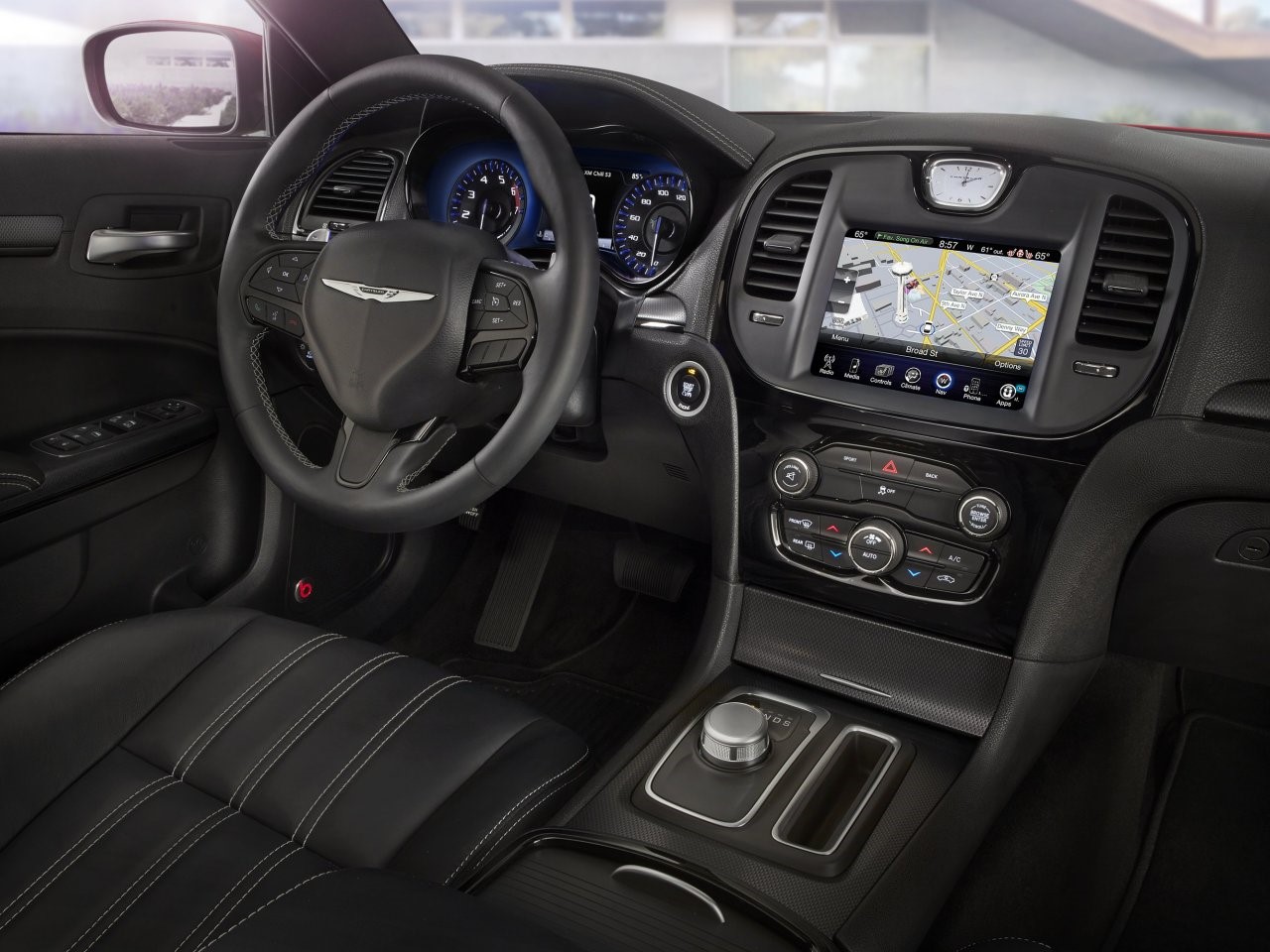 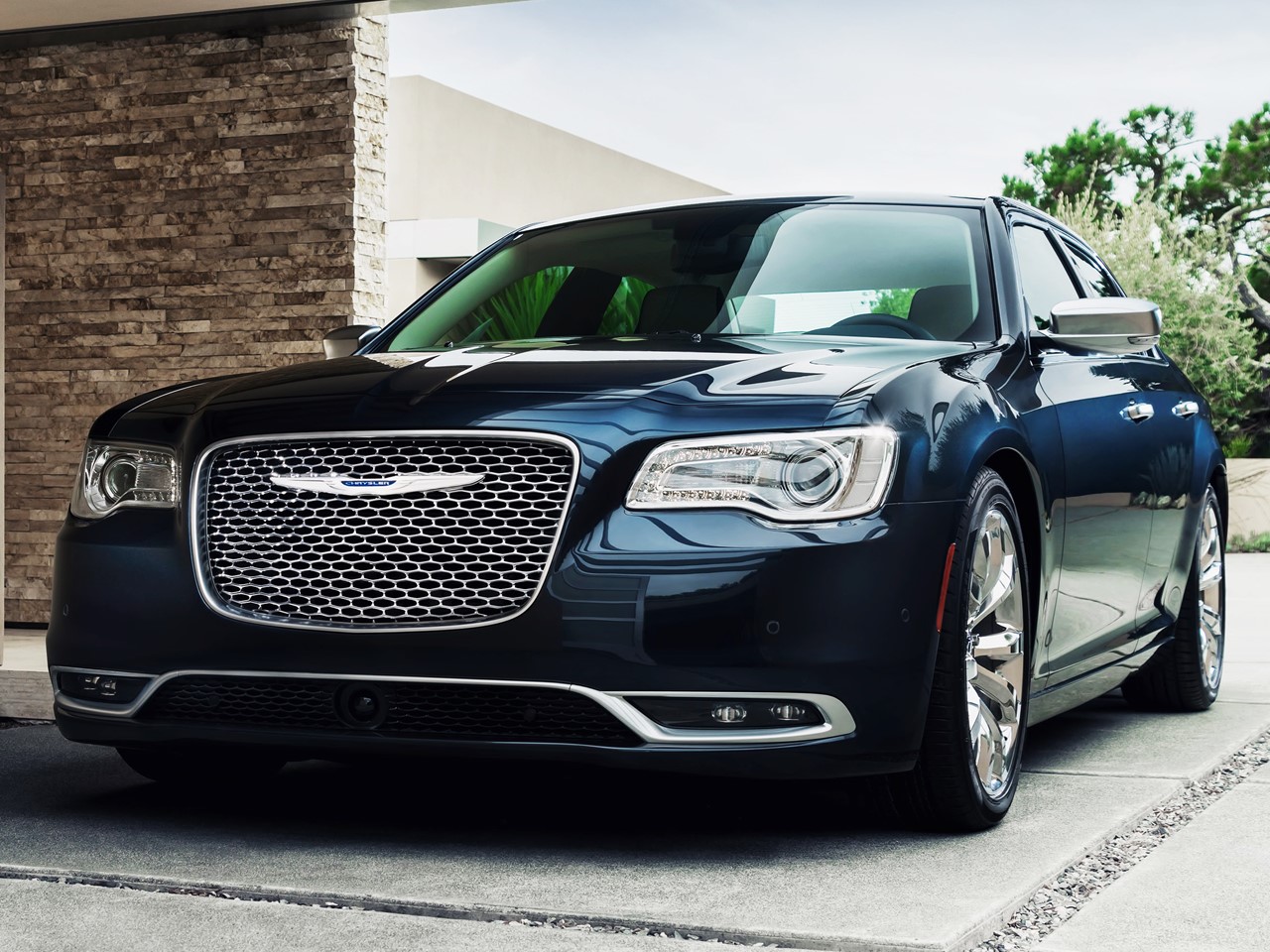 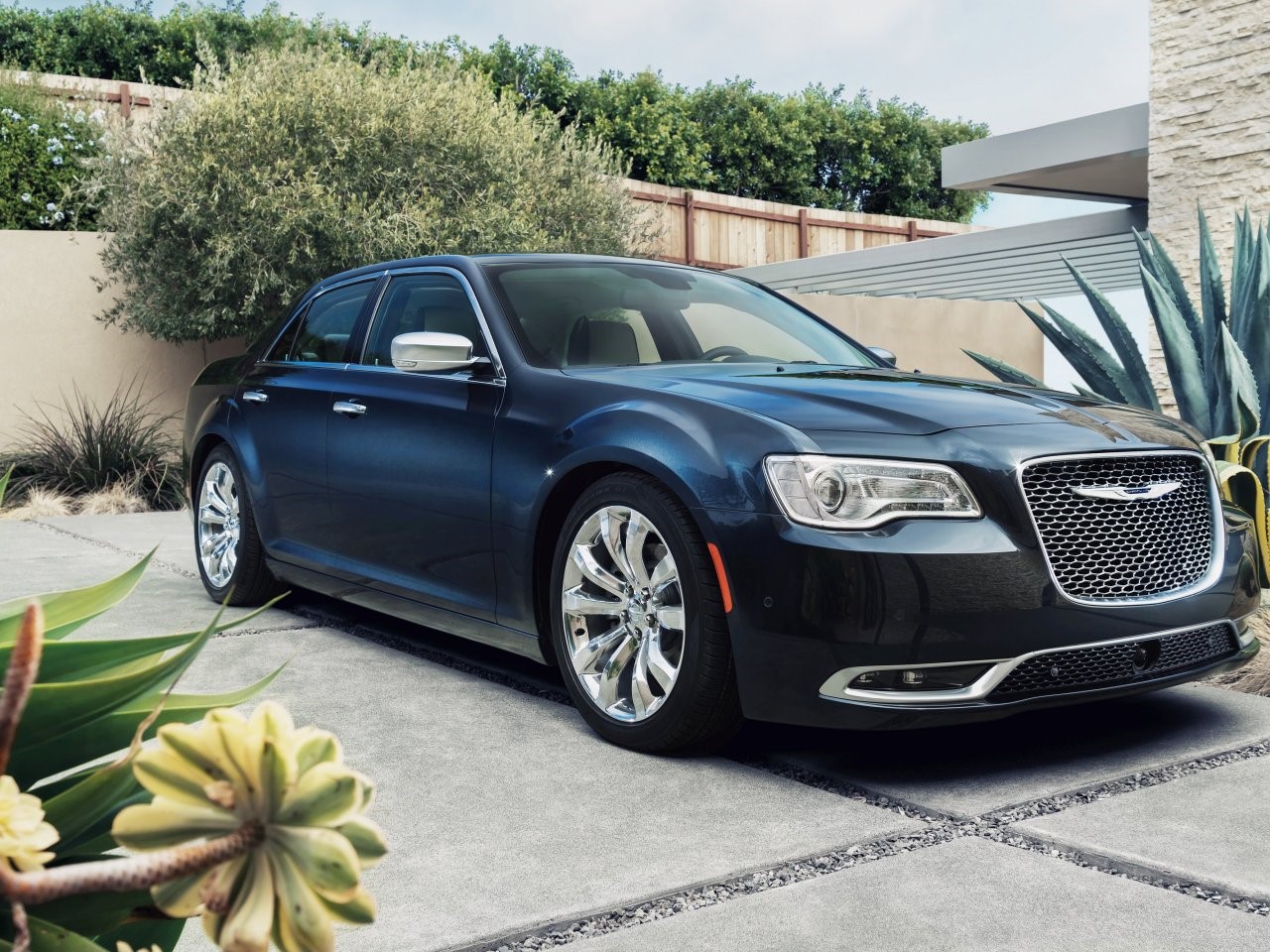 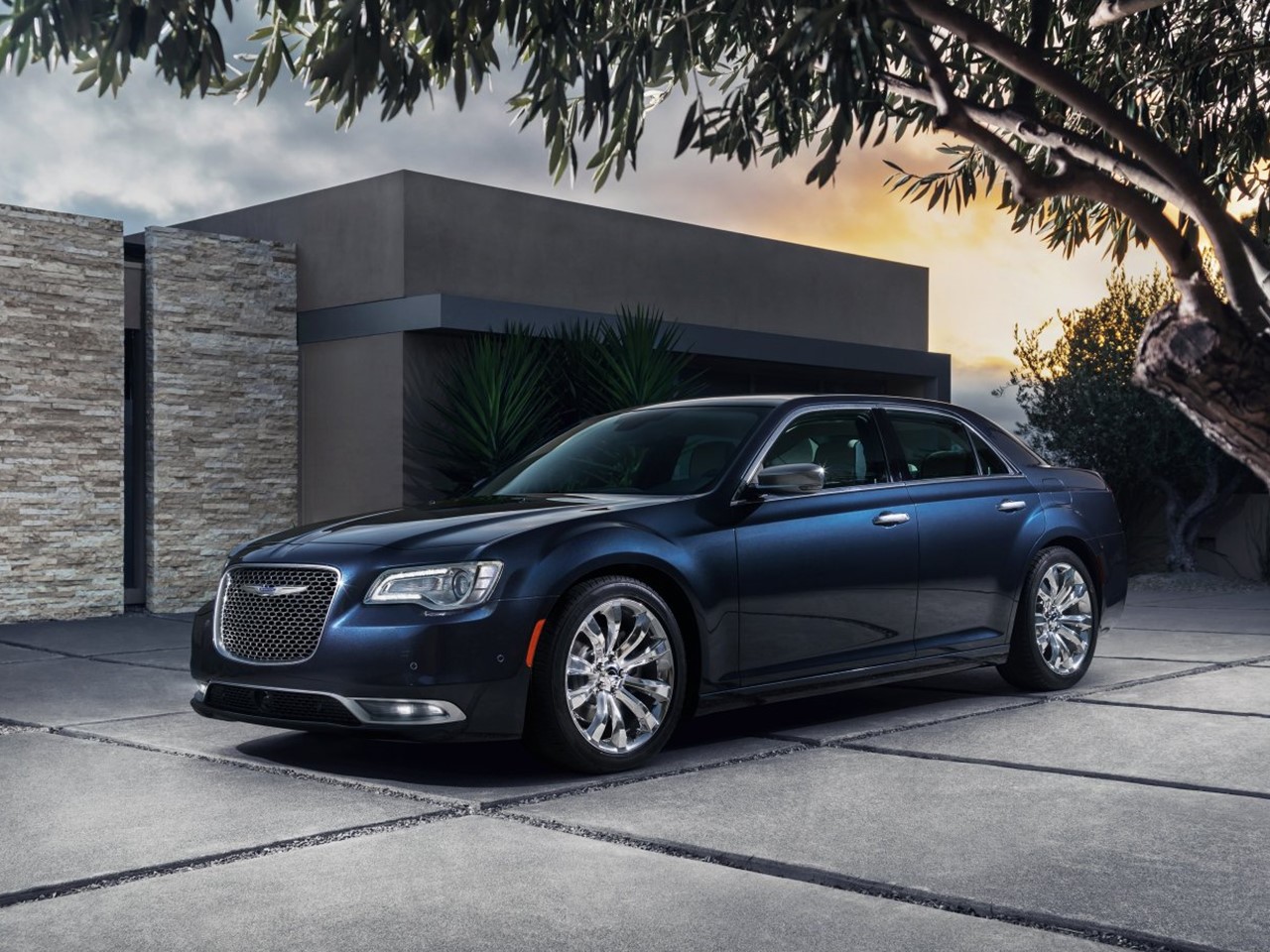 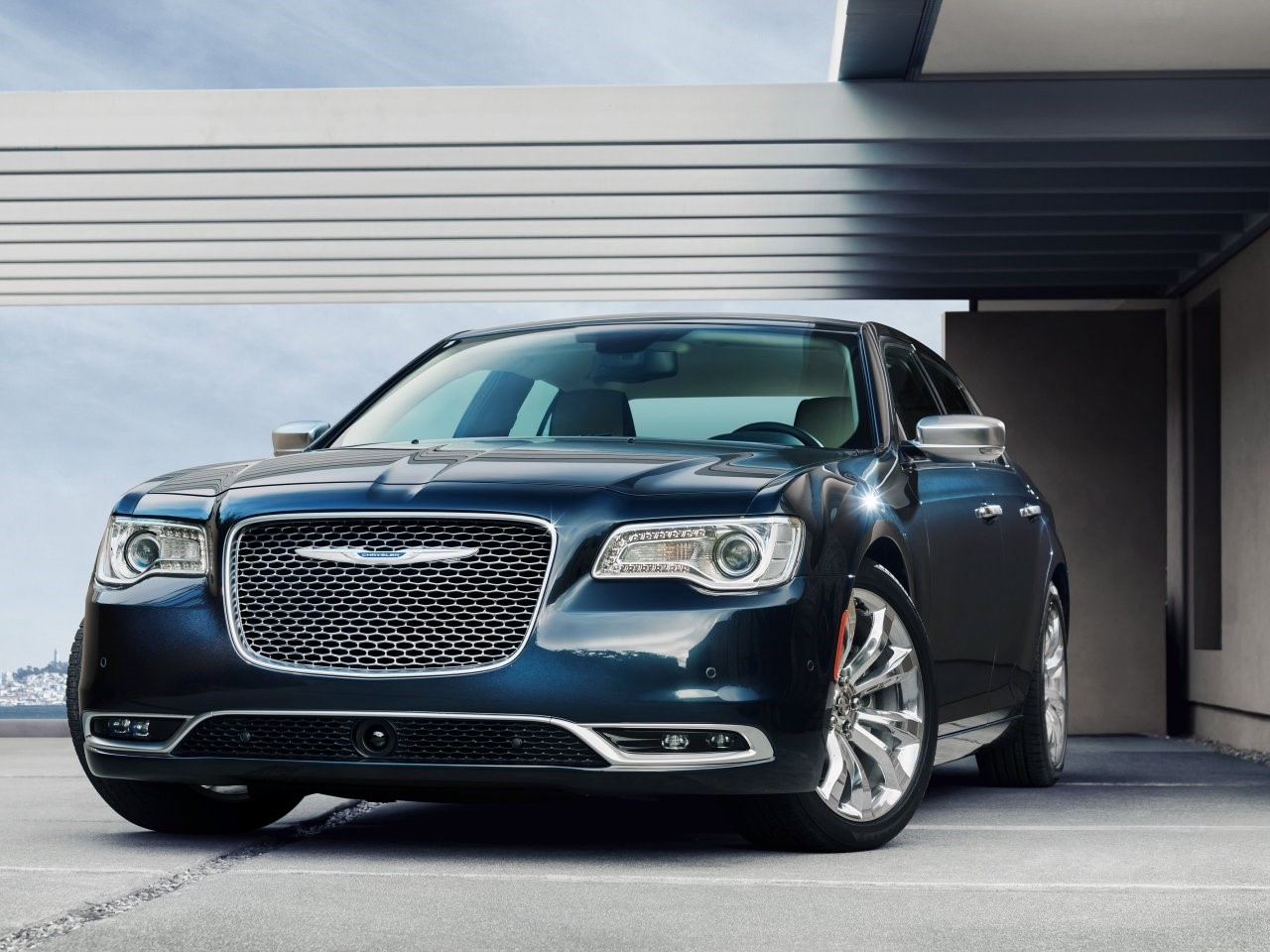 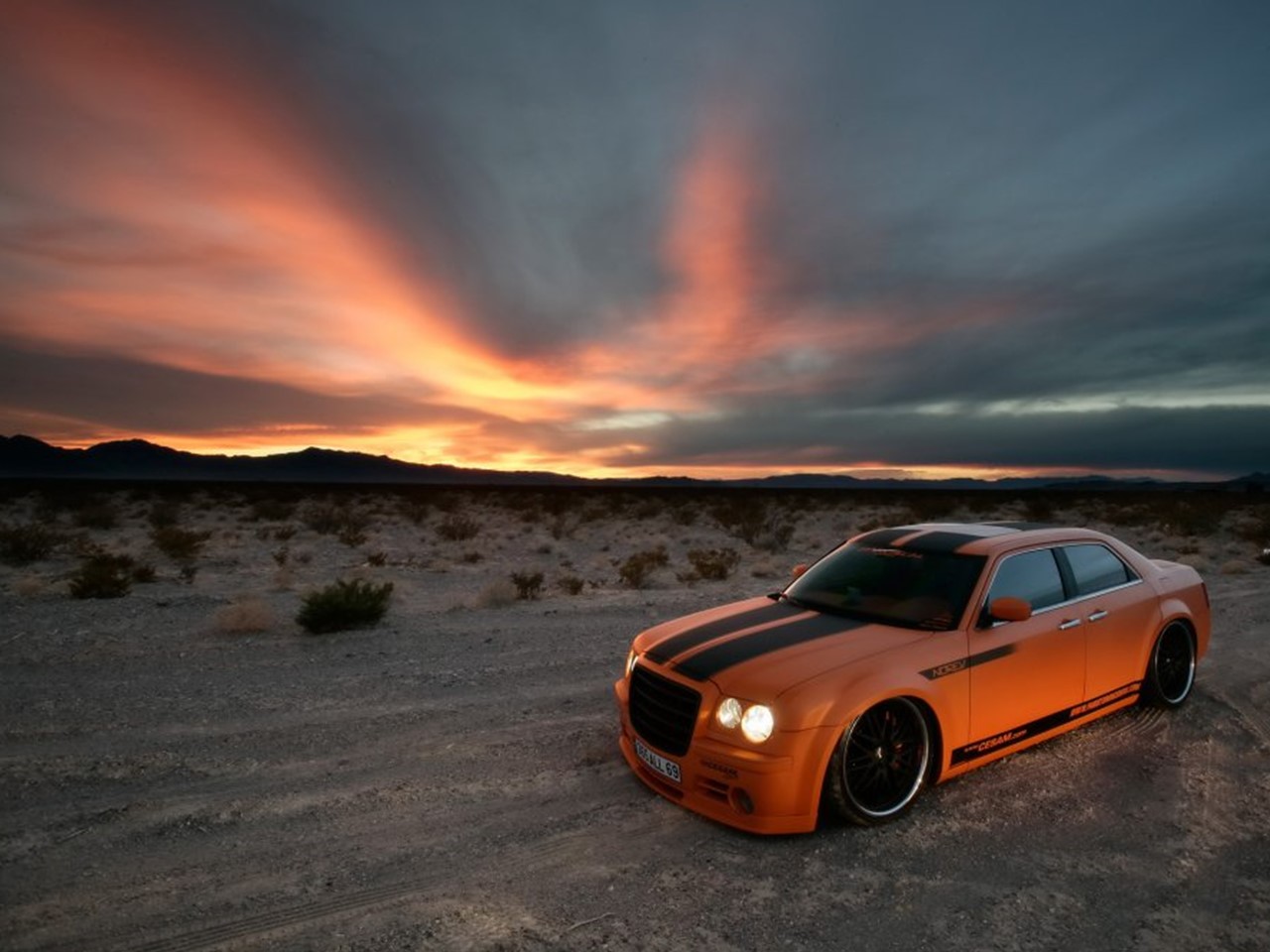 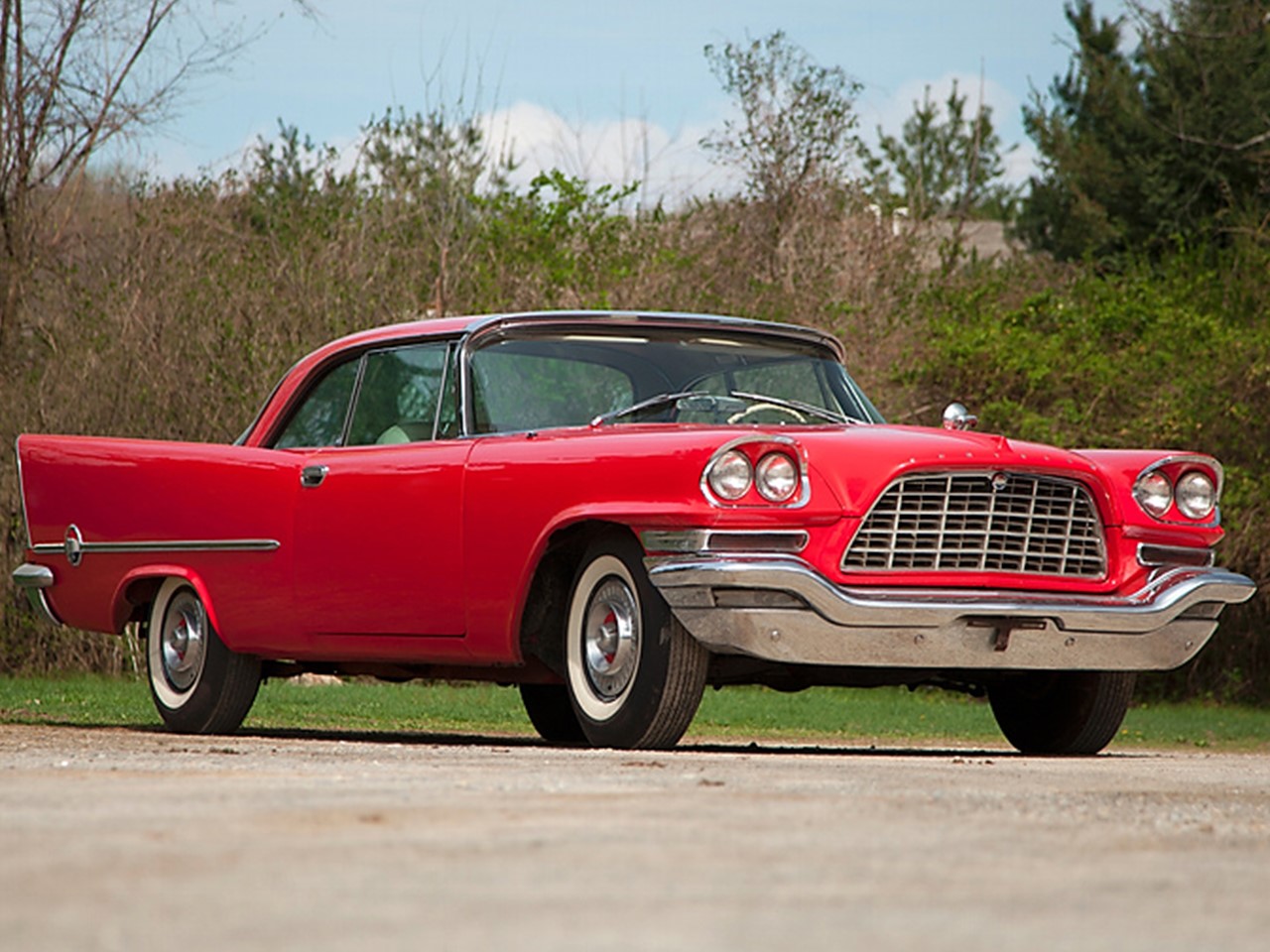 The ferocious 1957 Chrysler 300C is NotoriousLuxury