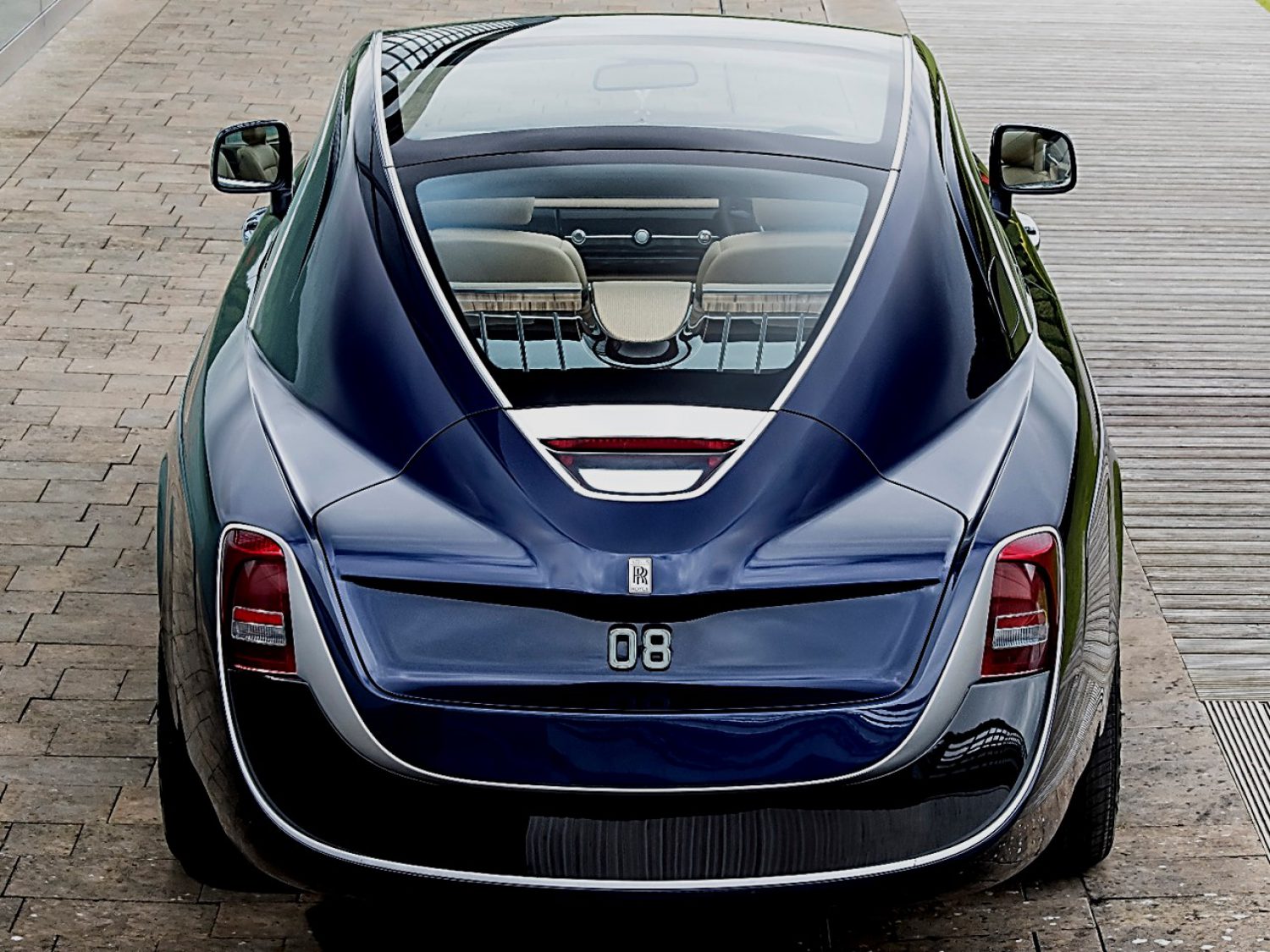 “As The Standard of the World Turns”

By 1960, the automotive industry began to refine their offerings to shed the over-indulgent look from the 1950s. Tail fins, tons of chrome, and gaudy trim were sacked, creating a subtle, less flamboyant look. Cadillac trimmed the fins and removed a lot of its gaudiness for an elegant new appearance.

The hardtop sedan with its distinctive Vista Roof, aka Flattop, was the most popular body style for General Motors 1960 model year. Style code #6239 four-window four-door Series Sixty-Two hardtop sedan is a stunning example of Cadillac style. The 1960 Series Sixty-Two Flattop hardtop sedan presents an encore performance…in the continuing saga of “As the Standard of the World Turns.”

The four-window, four-door hardtop “Flattop” sedan was introduced for the 1959 model year and proved to be an instant success. The four-window “Vista Roof” out sold all sedan models. It was the panoramic wrap-around rear backglass with a flat roof extending slightly past the glass that created an entirely new version of an extremely popular body style. The car that started the pillar-less hardtop styling is the 1949 Series Sixty-Two Coupe deVille. This unique hardtop design started a cult following in the entire automotive industry. Cadillac introduced the first four-door hardtop sedan for the 1956 model year named “Sedan deVille.”

There are no blind spots with the “Flattop”

The 1960 model year was a dramatic step forward in contemporary motorcar design. The tallest rear tail fins in the industry were introduced for the 1959 model year by Cadillac. These iconic tail fins remain popular and are highly collectible. For the 1960 model year, Cadillac trimmed the excess and lowered its profile for a classic new look. Its restrained adornment made it even more elegant.

Cadillac’s new exterior design included a rear bumper with back-up lamps, tail lamps, stop lamps, and turn signals all together in vertical oval chrome housings. The red lens in the tapered new tail fins worked with the stop and turn signal lamps. Subtle refinement made the 1960 look radically different from the 1959 model. The emphasis was no longer on flamboyance…but elegance. Continuing as always, was Cadillac’s unique devotion to excellence. 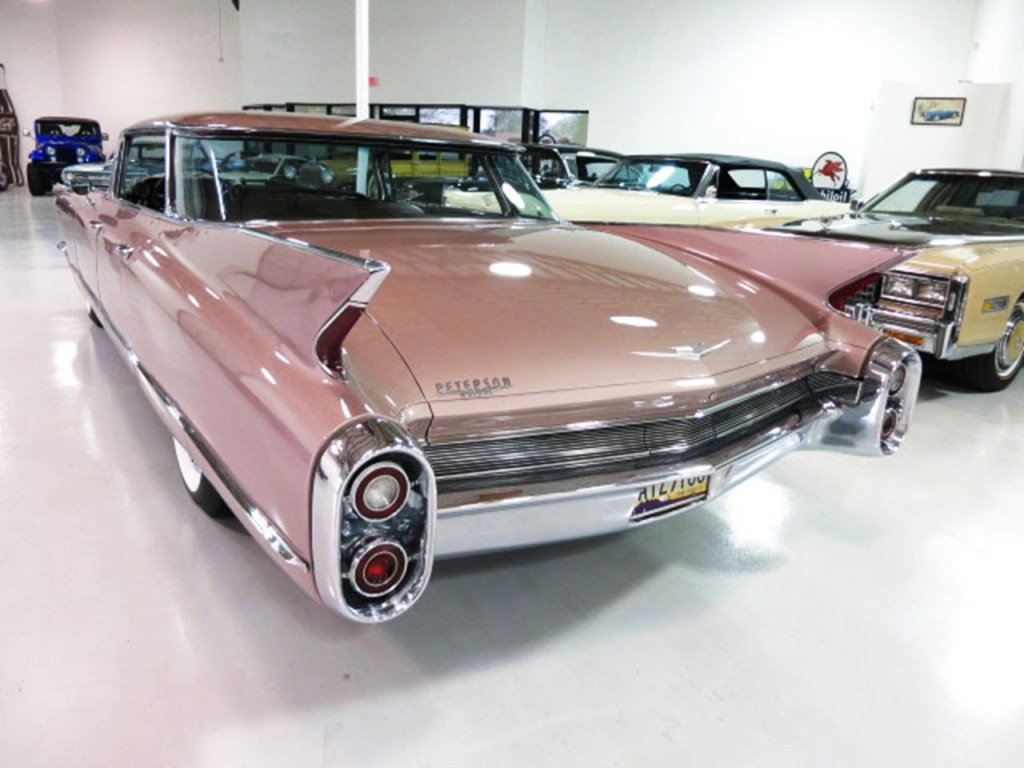 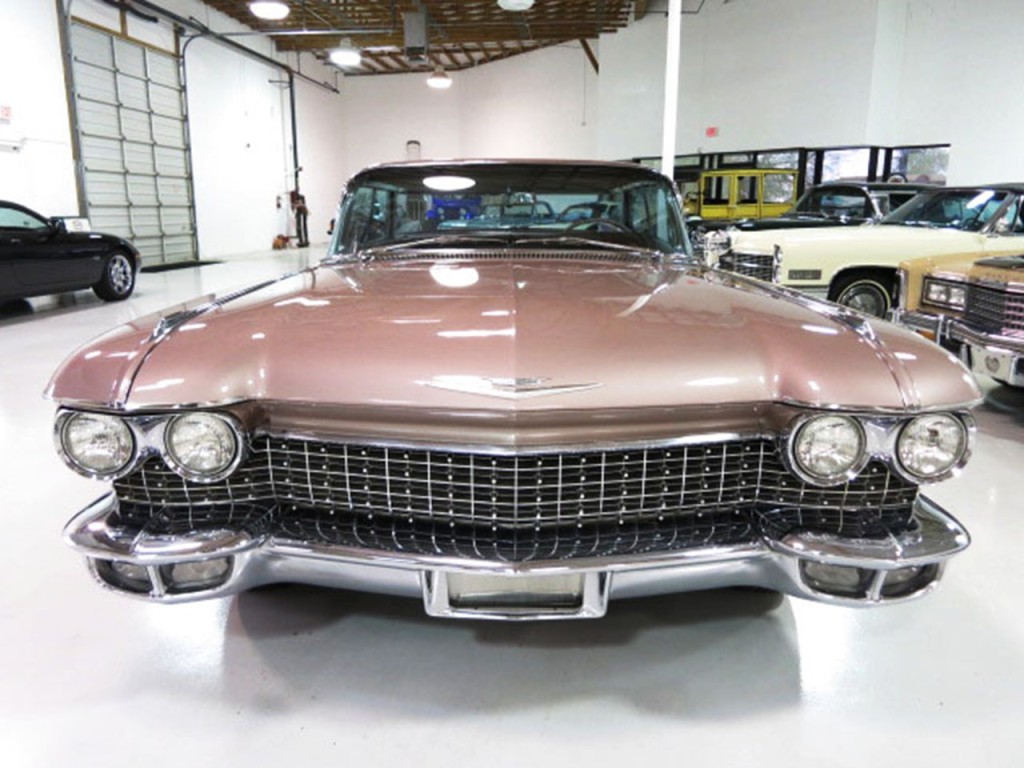 This is another fine classic automobile sold by Bob Adams Classic cars out in beautiful Arizona  in the United States of America. They are purveyors in the business with over 50 years experience. I have been a fan of theirs for many years! You GO Bobby Adams III! 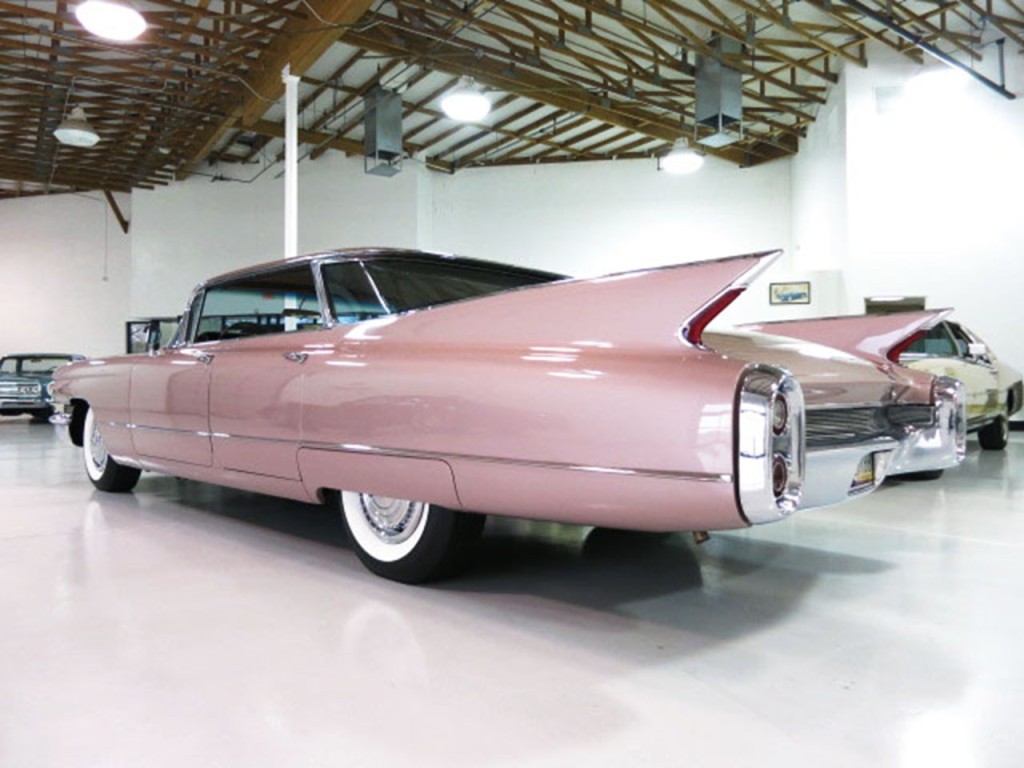 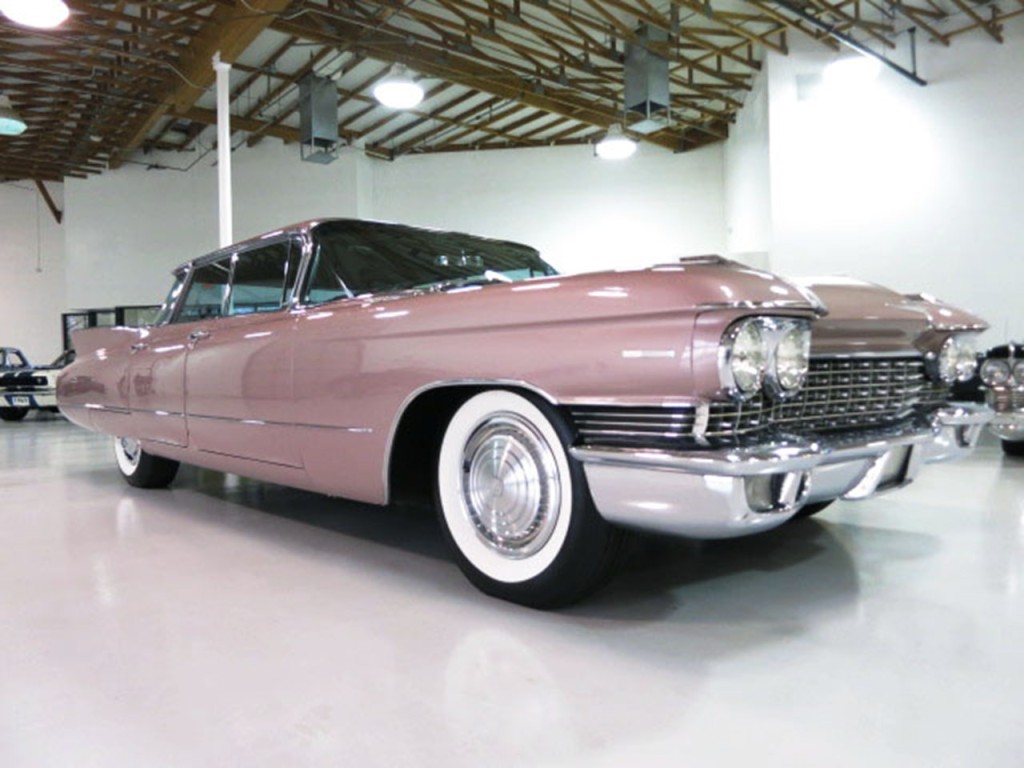 The 1960 Series Sixty-Two four-window hardtop sedan has a flowing, more contemporary silhouette for the day. The tailored fins and roofline were setting the stage for future aerodynamics. It is actually a bit lower than the previous model. This was the beginning of the finest expression of a new era in luxury motoring.

With body by Fisher and interior by Fleetwood, the 1960 Series Sixty-Two four-window hardtop sedan was immediately recognized as an achievement unparalleled in motoring history. Cadillac was “Standard of the World” in motoring majesty. Series Sixty-Two was the entry-level model to Cadillac motoring distinction. It was priced just below the DeVille series. Whatever model chosen, Cadillac provided a constant source of satisfaction and pleasure. 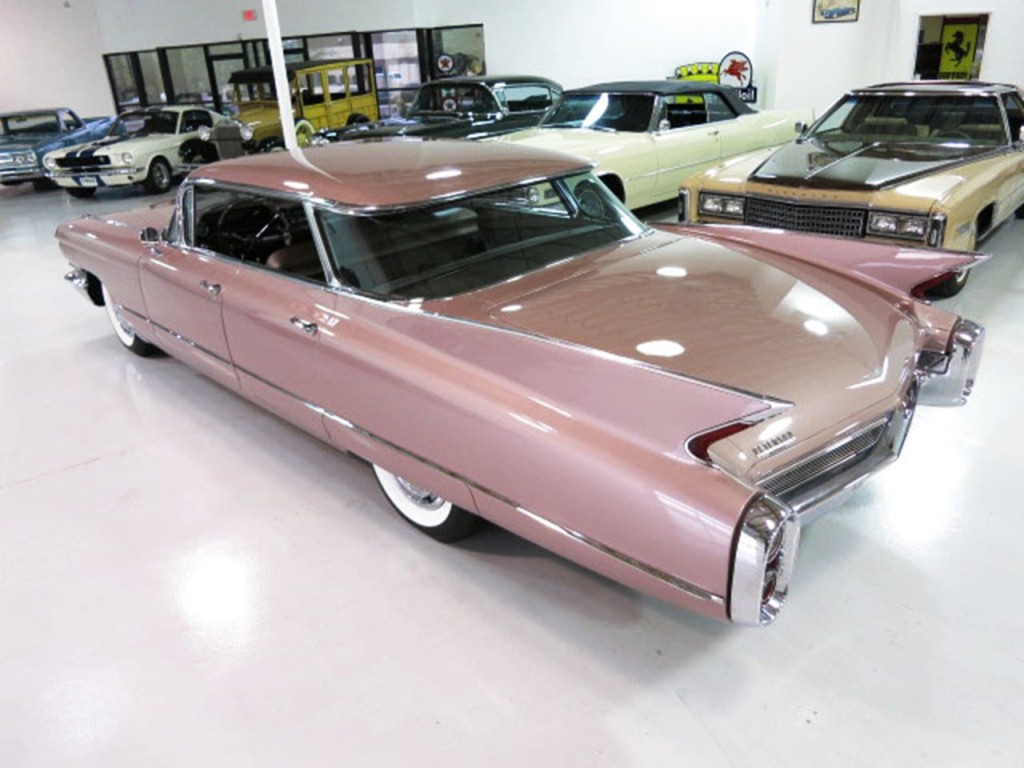 Series Sixty-Two is a Cadillac in every respect. Its luxurious interior for the four-window hardtop sedan was available in two different fabrics with Florentine grained Elascofab bolsters. A folding center armrest was standard for the rear seat. Deep loop-pile carpet made of a rich nylon blend continues the luxurious Cadillac tradition of elegance. The Vista Roof treatment added a light airiness to the interior as well as increased rear visibility with no blind spots. 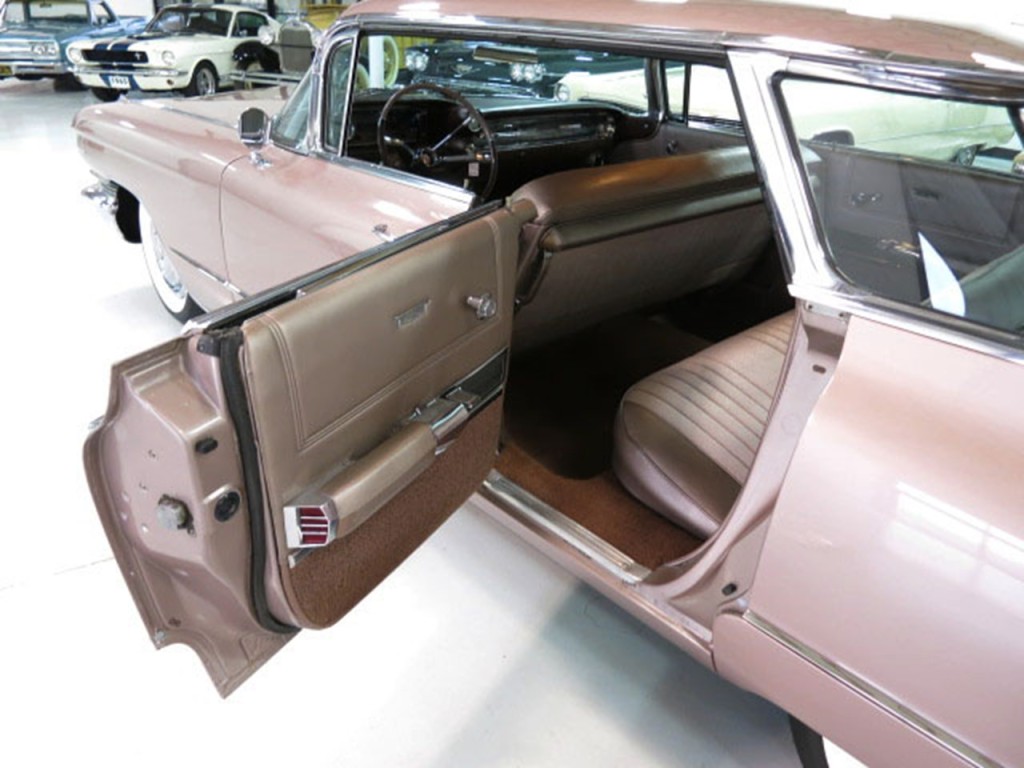 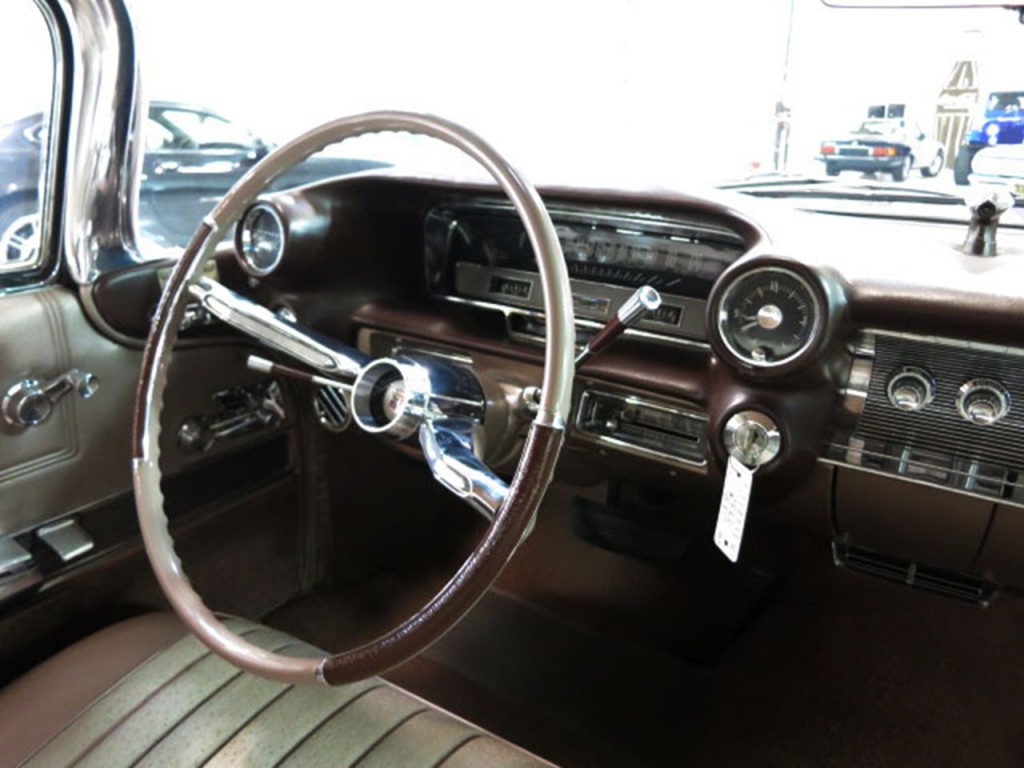 This model has the optional factory air conditioning

It was fitted all the way around with Cadillac shock absorbers that maintained consistent ride quality regardless of road conditions. They had a gas-filled nylon envelope that replaced the conventional air space in the fluid reservoir. New lower control arms at the rear incorporated dual-leaf springs for improved quietness and impact softness.

Cadillac power steering made maneuvering the finest luxury car in the world effortless. The lightest touch was required. It was designed with a flexible rubber coupling in the steering shaft which absorbs and cancels vibration, noise, or road impact before it reached the steering wheel. Steering symmetry was balanced to return the steering wheel back to straight-ahead position after turn.

Cadillac power brakes enable the driver to bring the car to a quick, fade-free, and safe stop with gentle pressure. New for the 1960 model year were self-adjusting brake shoes that adjusted themselves each time the car was driven in reverse with the brakes applied. They even compensated for lining wear.

New finned rear drums permitted more evenly balanced braking between front and rear brakes for increased stopping efficiency and less lining wear. The parking brake had an automatic vacuum release when the car was shifted to a drive gear; it could also be used as an emergency brake since it wouldn’t lock in gear with the engine running.

Cadillac’s major objective was to design and build an engine that could move a big car through traffic with effortless ease and flexibility. Also, to carry it swiftly up steep inclines without hesitation, and perform effortlessly at turnpike speeds with no audible signs of its presence. A Cadillac engine was a masterpiece, the 1960 model year was the latest edition.

The Cadillac 390 CID 16-valve V8 engine was equipped with a Carter 4-bbl downdraft carburetor with equalized manifold. A single 4-bbl carburetor worked as two sets of dual-barrel carburetors. The forward set with the smaller barrels did the work while at idle or normal cruising. The second set is the larger barrels; they are activated when the accelerator pedal is pressed further to permit increased power and acceleration. The engine used a mechanical fuel pump, intake silencer, automatic choke, and dry-type air cleaner.

The right-hand “DR” position is the position preferred by many for city driving as it locked out fourth gear up to 75 mph and provided instant acceleration with “step-down.” The “Park” position held the car securely on the steepest grades. The left-hand “DR” drive range provided extra safety when passing another car on the highway or for acceleration out of an emergency traffic situation. It provided faster “step-down” acceleration by simply depressing the accelerator partially.

The 1960 Cadillac Series Sixty-Two hardtop sedan is a large front-engine, rear-drive car. It rides upon a long 130” wheelbase, has the luxury length of 225”, and is 80” in width. It uses a Hypoid type rear axle with an off-set differential housing to accommodate straight-line drive. The sheer size and excellent weight distribution combined with a luxury tuned chassis created the famous Cadillac “Magic Carpet” ride. 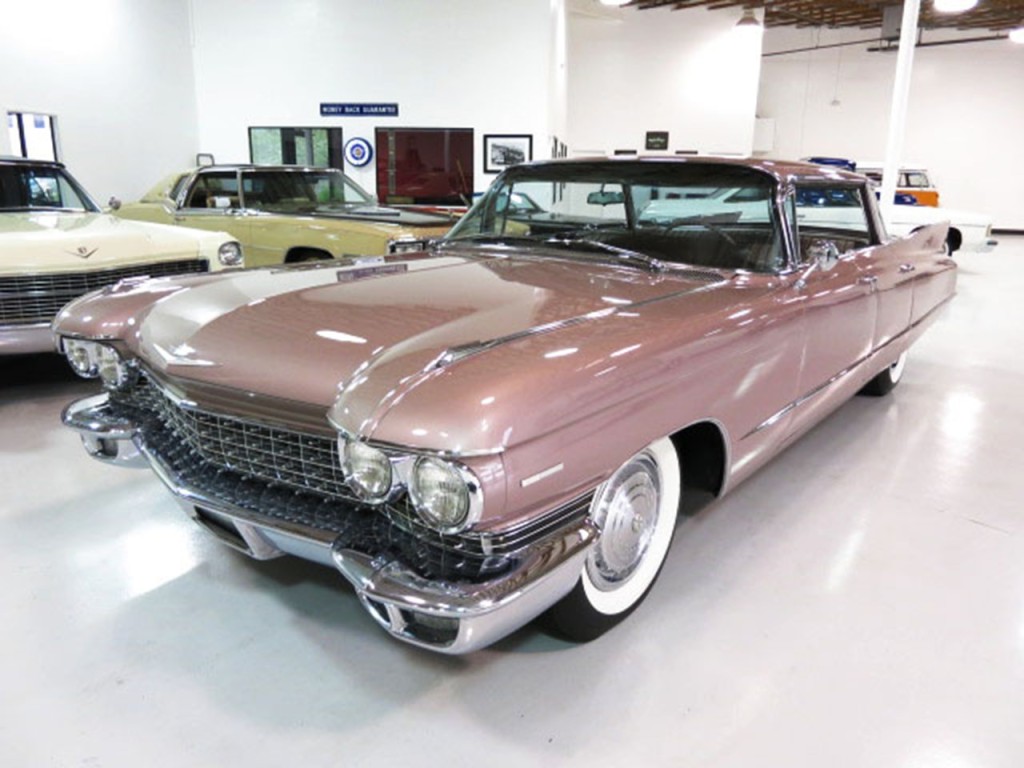 The “Standard of the World” for Nineteen Hundred and Sixty was a brilliant motorcar like no other. They were built with such pride and precision; therefore, there were no quality control defects requiring a massive re-call. The Series Sixty-Two was the entry-level Cadillac that didn’t stint on luxury. The four-window Flattop aka Vista Roof hardtop sedan was one of Cadillac’s most popular body styles.

Powered by the efficient 390 CID V8, smooth imperceptible overall operation was swift and rewarding. The interior by Fleetwood didn’t forget why people buy a Cadillac. The 1960 Series Sixty-Two four-window hardtop sedan is another jewel in the crown of the brand. This is another highly successful encore performance…in the continuing saga of “As the Standard of the World Turns.” 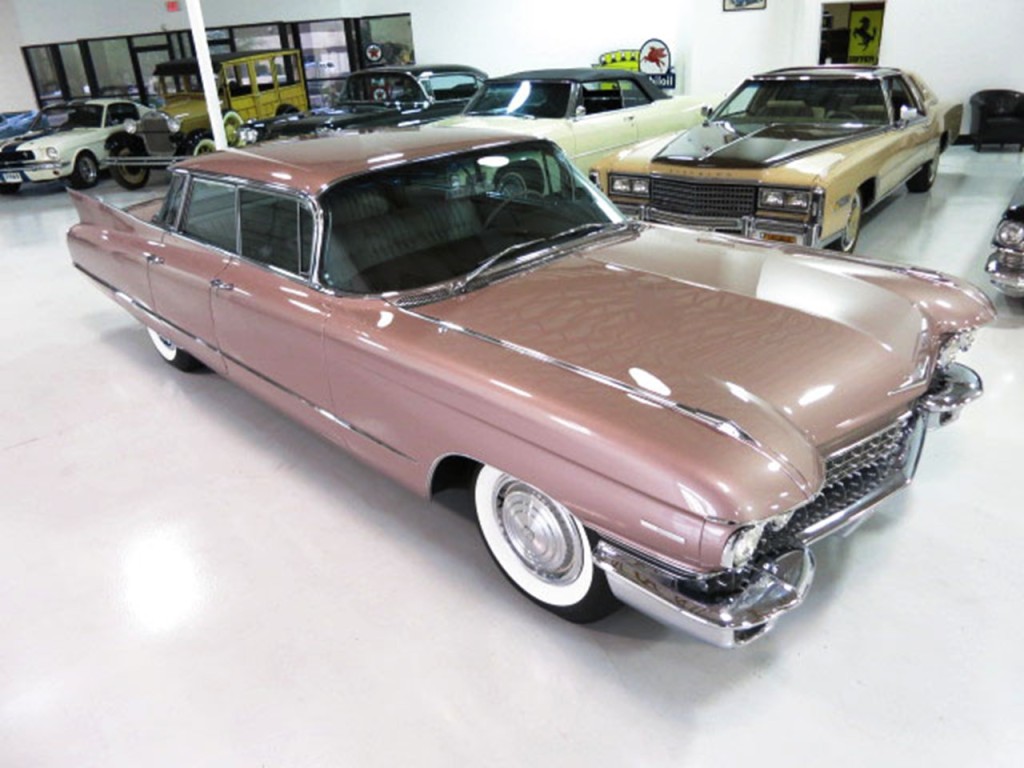 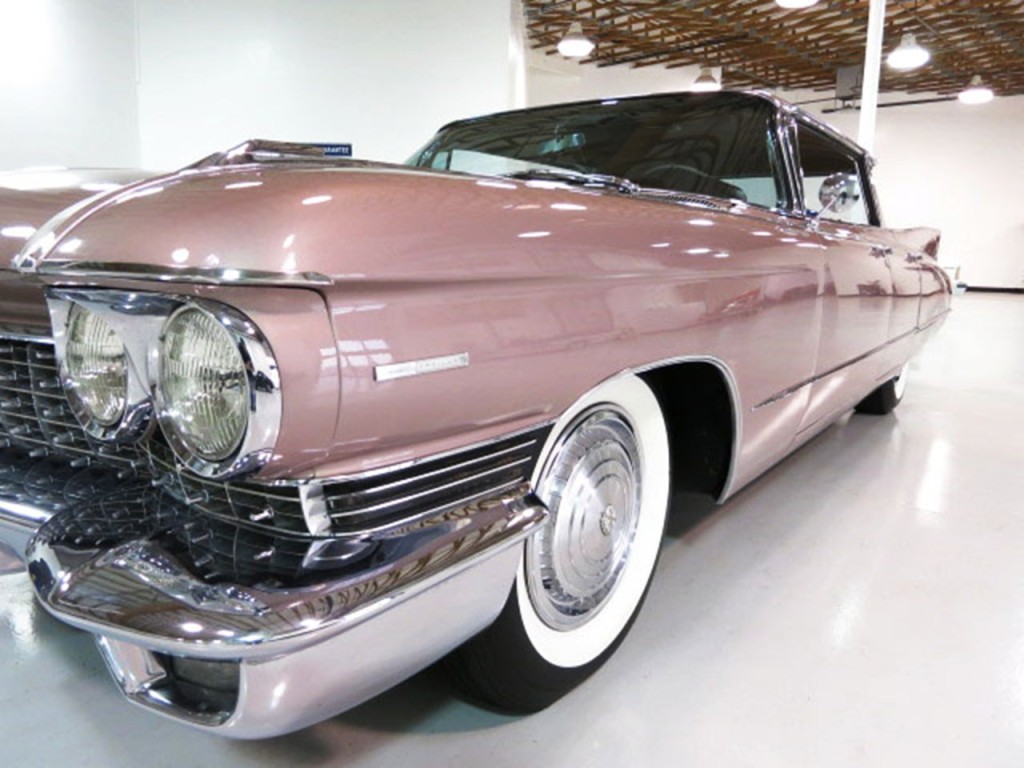 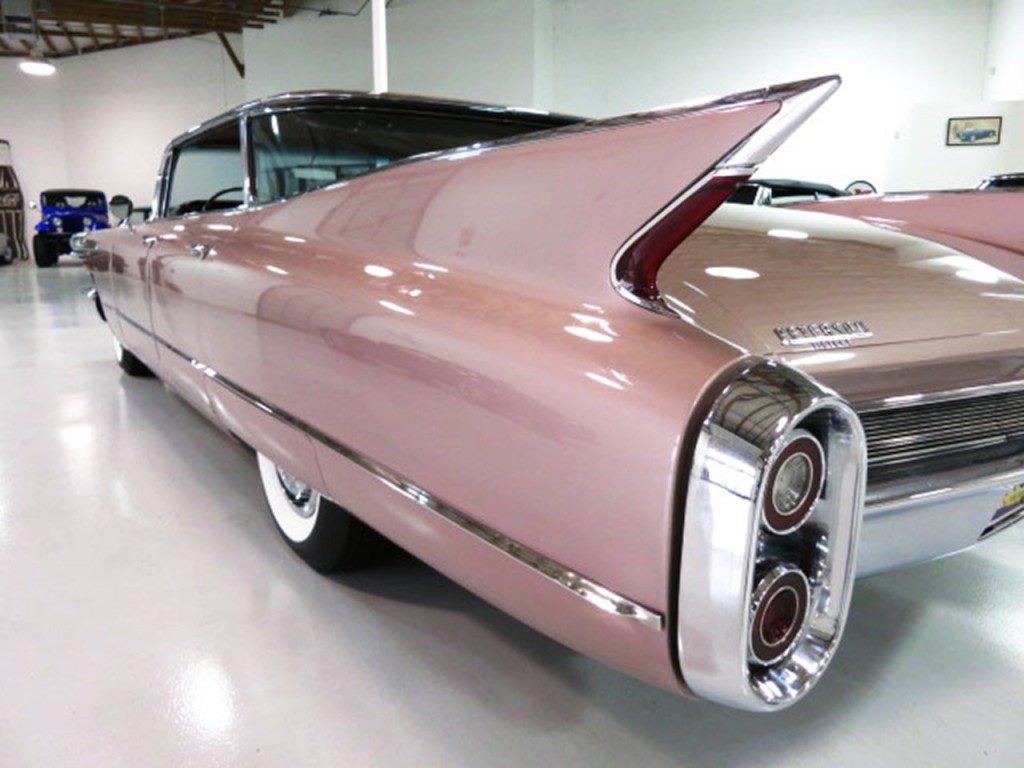 "As the Standard of the World Turns", Cadillac, Cadillac Historical, Editorials, Luxury Sedans