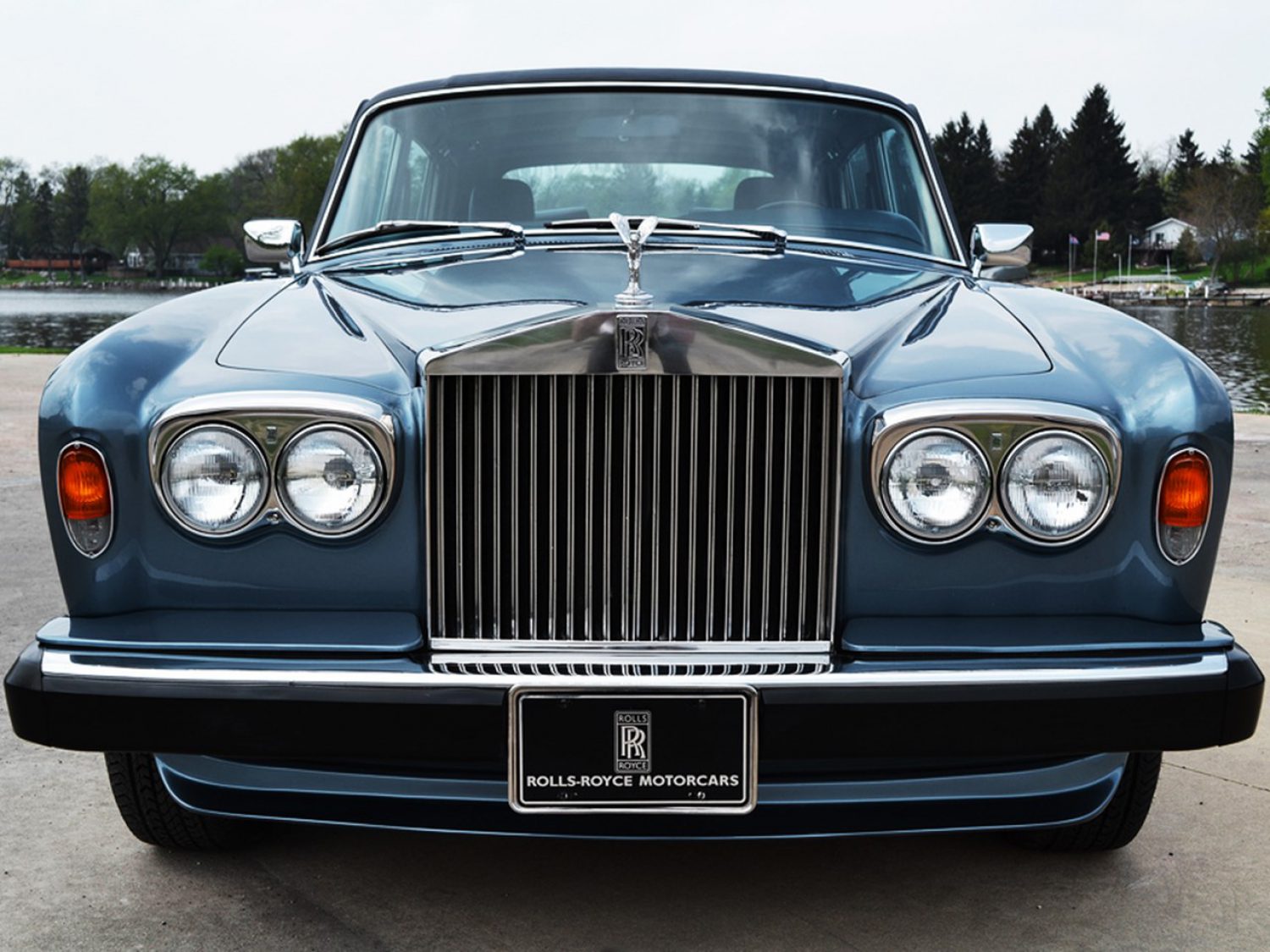 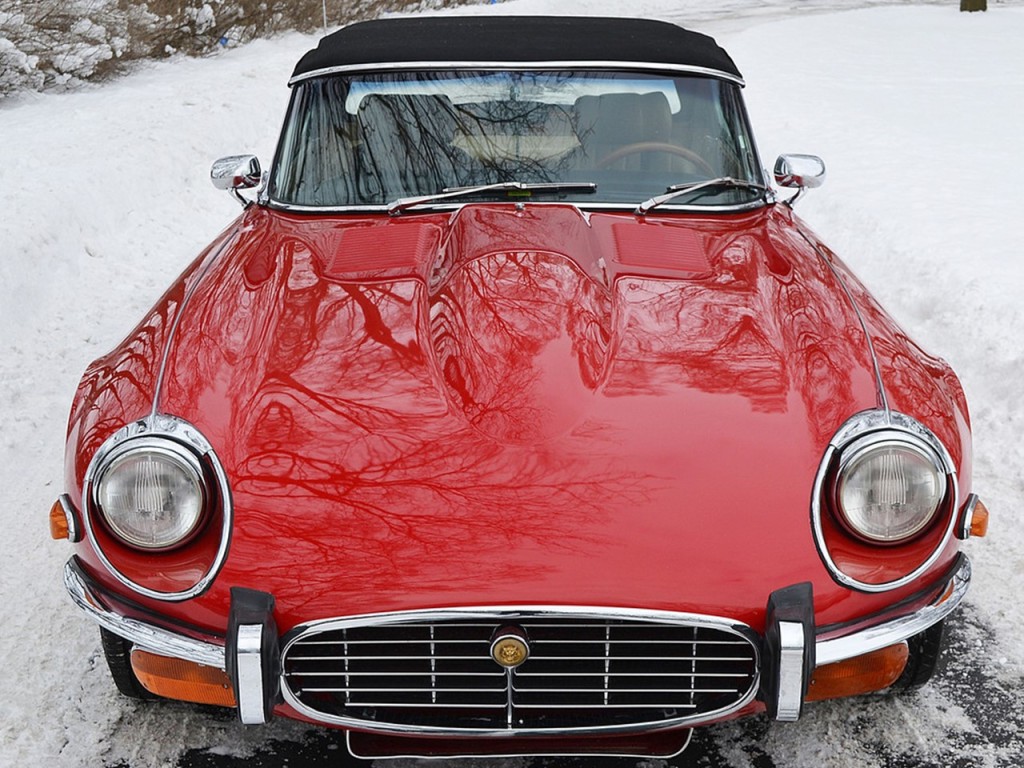 For the 1973 model year Jaguar unlocked the ultimate cat…it was a ferocious 12-cylinder animal. It sprinted from 0-60 mph in 5.7 seconds. Because of inherent balance the engine idled in near silence. Jaguar set their own benchmarks of what a sports car should be.

The 1973 E-Type Series III open tourer was a restless big cat on the prowl…its classic styling maintained a refined precision look. Tap the accelerator and this big cat came to life…and pounced. The entire time any Jaguar is in motion it purrs… 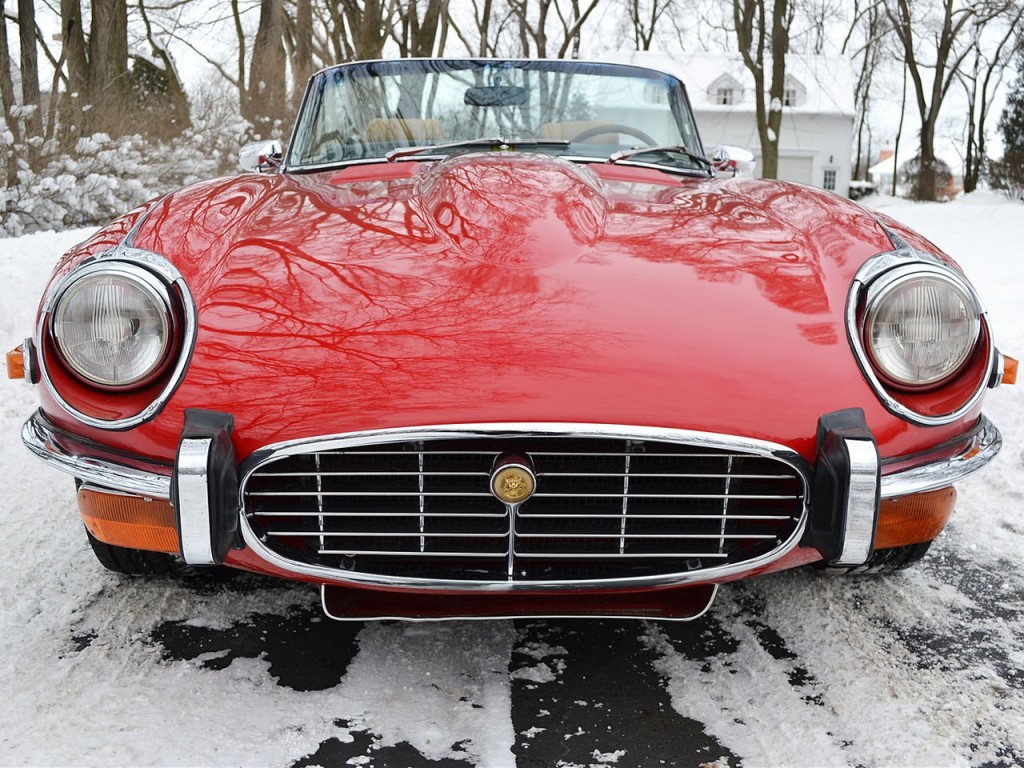 The E-Type V12 was Jaguar’s latest contribution to automotive history. The objective of Jaguar was smoothness of engine performance not brute force…the engine’s inherent balance made the cat almost purrrfectly silent with virtually no vibration. Its engine was cast mostly in aluminium. The E-type was one of the finest Jaguars to come from Sir William Lyons.

The cat’s V12 used the flathead design with a single camshaft per bank. The engine was heavily influenced by experience gained at Coventry Climax racing engines. Its flathead design produces excellent torque throughout the lower and middle speed ranges.

The bore/stroke for this powerplant was rather unusual. It used a 3 ½ inch bore and a 2 ¾ stroke which means the cylinders were unusually wide and the piston stroke unusually short resulting in lower piston speed for longer engine life.

The engine was equipped with a transistorized ignition system that eliminated contact points which was the major reason for an engine tune-up. It utilized the Opus Mark II Electronic Ignition system with electronic distributor, timing rotor, amplifier unit, ballast resistance unit, and a special high performance coil. 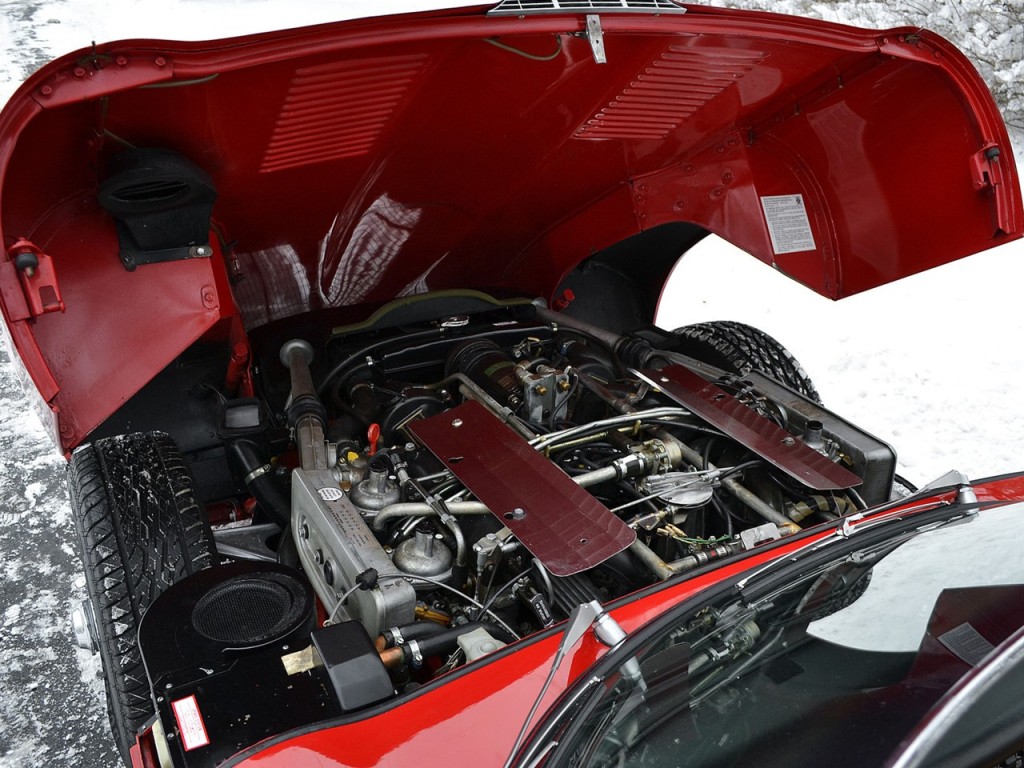 Of significance is its power-to-displacement ratio. The V12 displaces only 326 cubic inches yet develops 314 hp @ 6,200 rpm with 472 Nm of peak torque @ 3,800 rpm. Even at 6, 500 rpm there was an absence of engine noise. At Jaguar, every V12 engine and gearbox was bench tested as a unit, not once but several times. The final approval is only so after two different road tests by two different crews. And two different inspectors.

The engine was mated to a manual 4-speed syncromesh gearbox. It had a Diaphragm Spring-type Borg & Beck 10.5” clutch with hydraulic actuation. A Borg Warner 3-speed fully automatic transmission with torque converter was optional at extra cost. 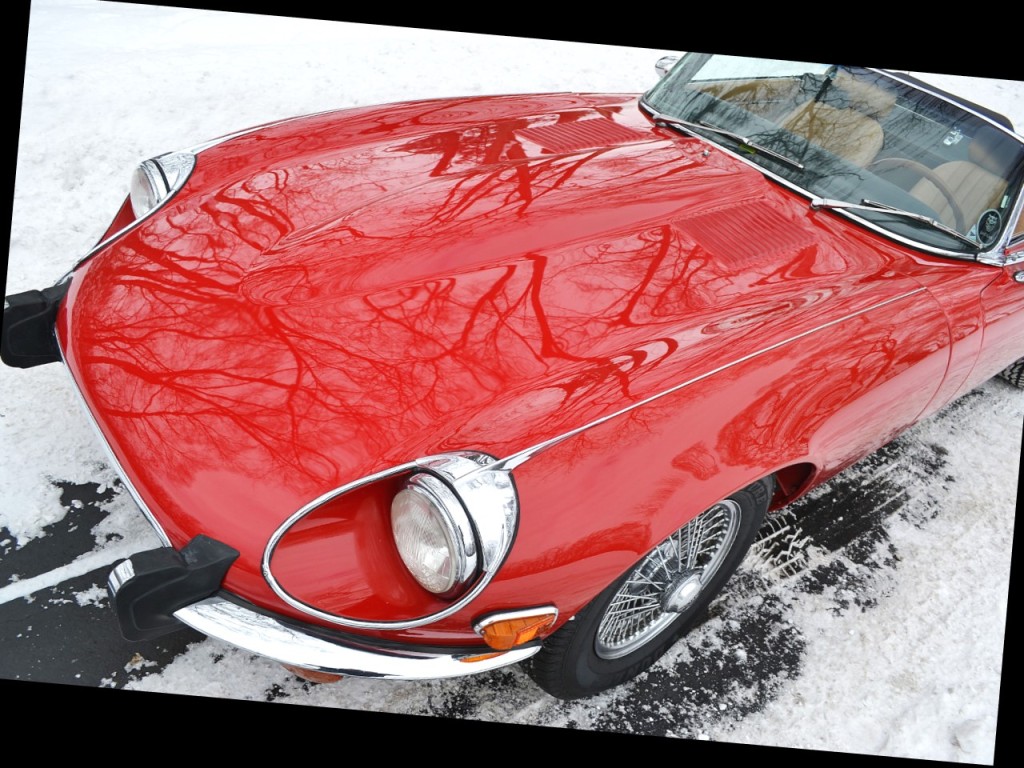 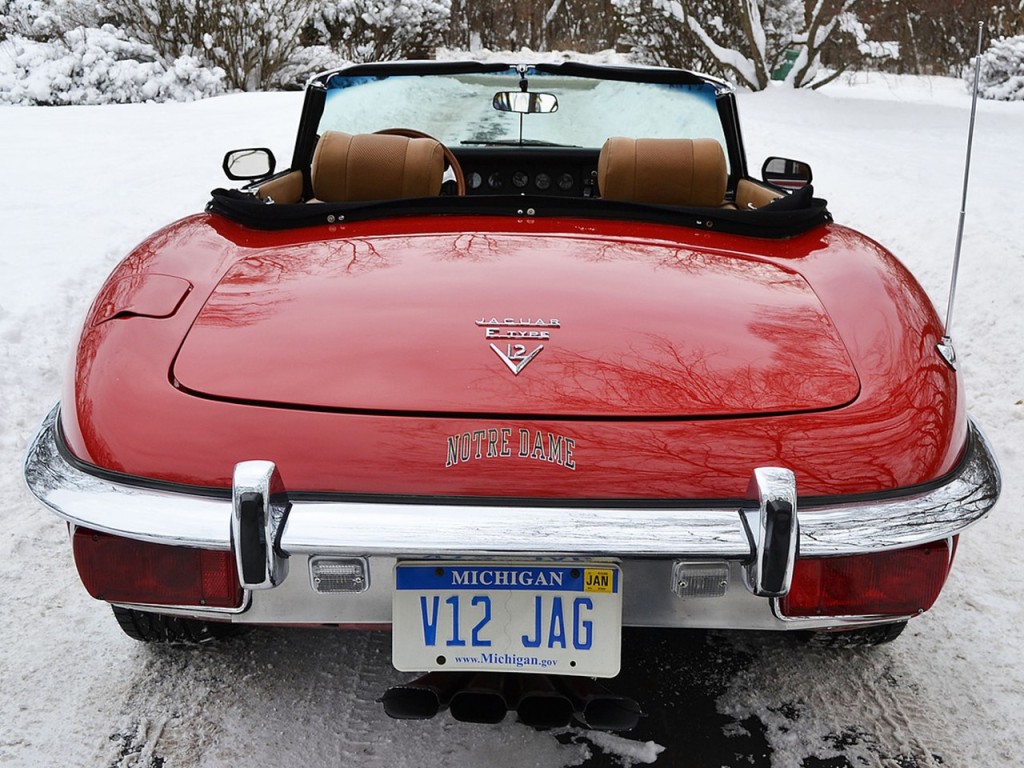 When you want the ultimate cat to stop in its tracks…it stops. The 1973 Jaguar E-Type convertible rode a long 105” wheelbase, was 184.4” long and 66” wide. It was built as monocoque construction with separate engine subframe. 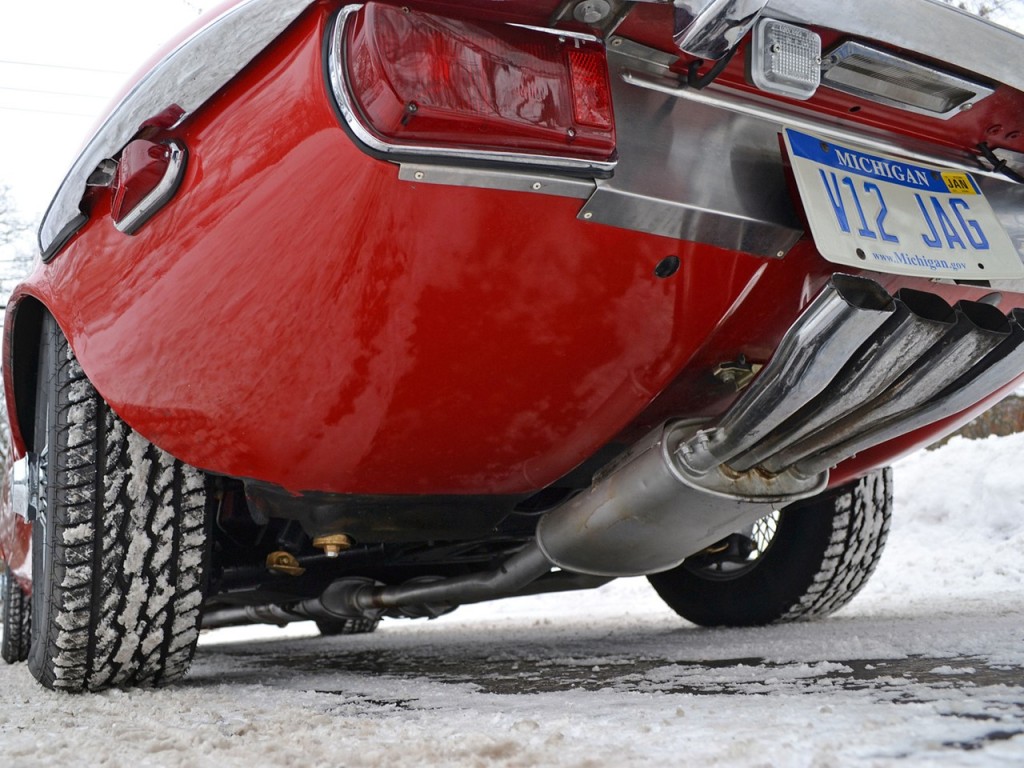 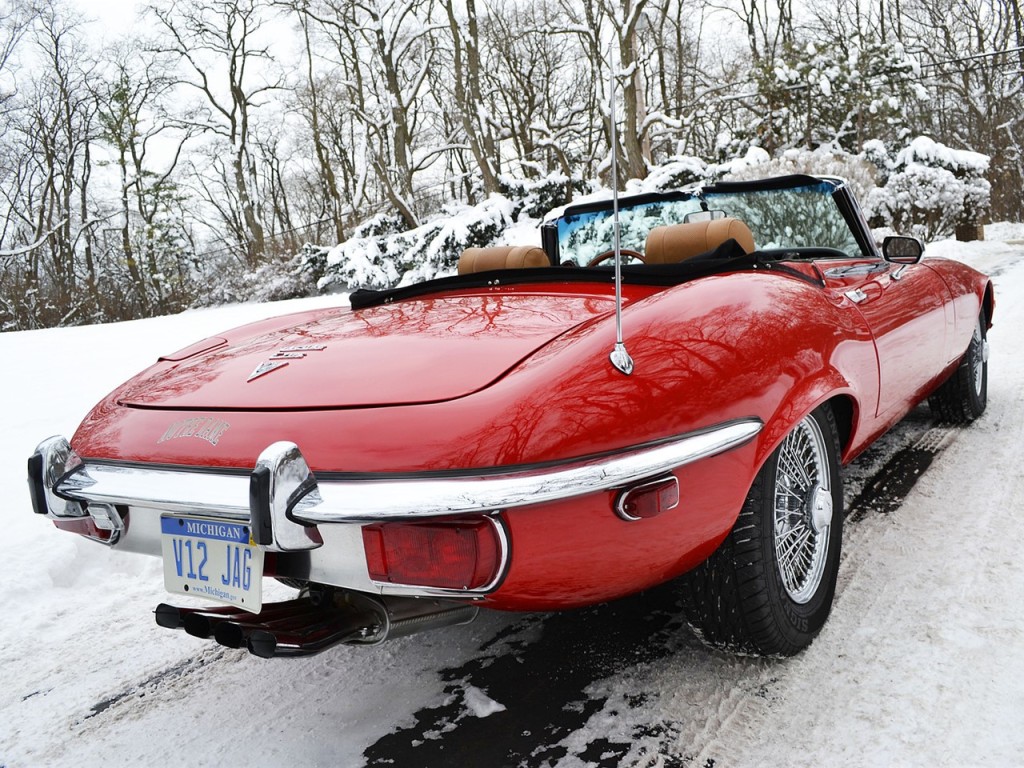 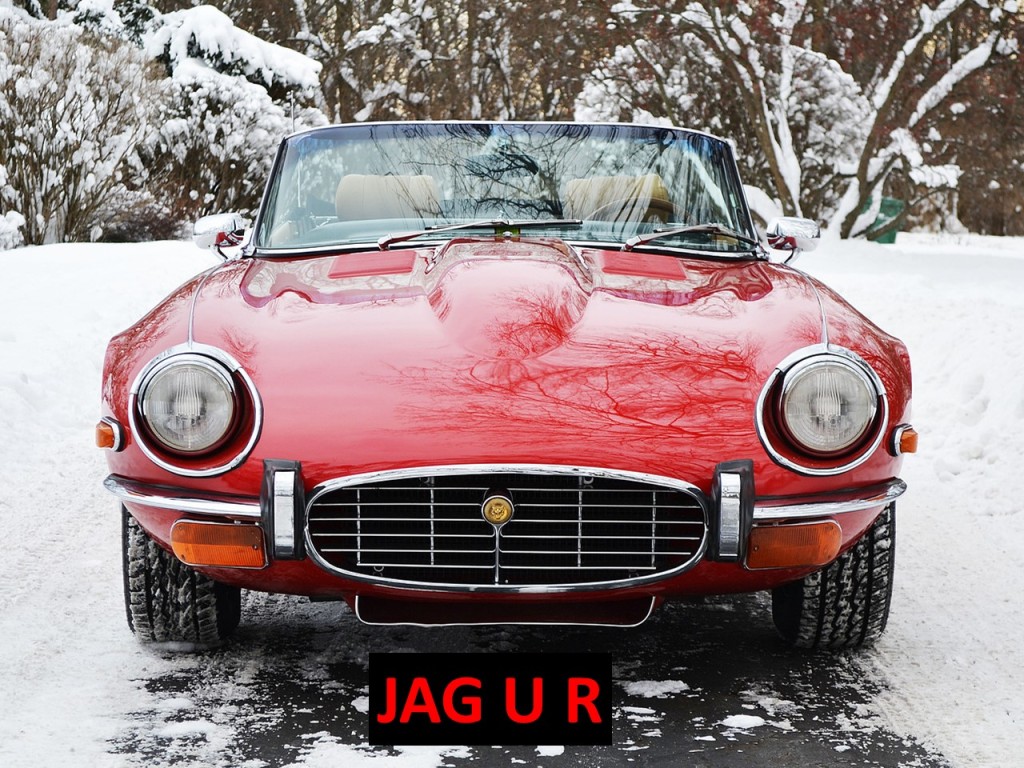 The ultimate cat’s flared fenders at certain angles looked as though it were clawing the pavement in pursuit. Its design is cat-like especially the headlamps at idle this animal seems ready to spring. The front grille had a cat-like sneer gleaming through an oval of chrome. Beneath the grille was an extra induction scoop for more efficient engine ventilation. From the front, she looks perilously perched ready to pounce… 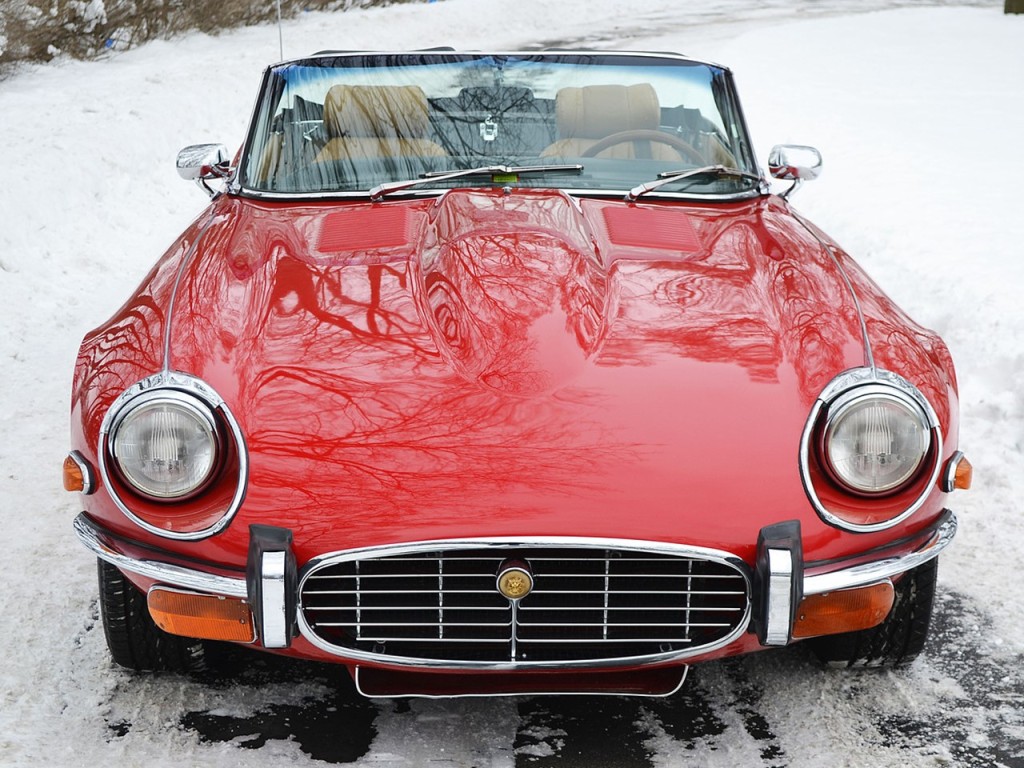 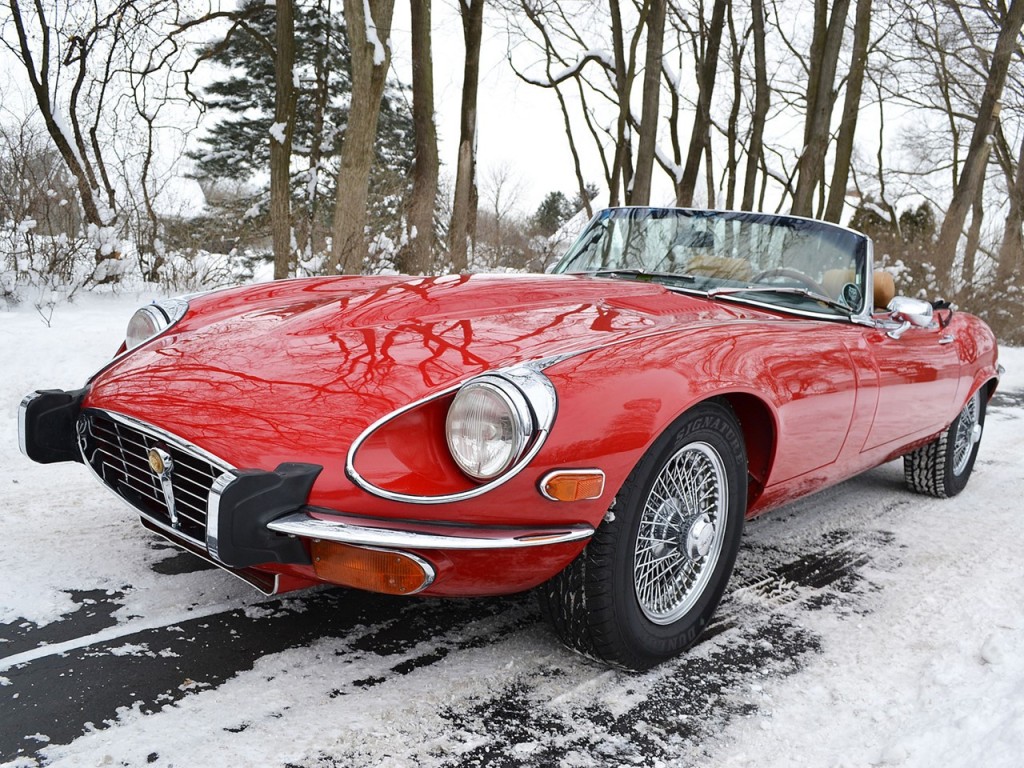 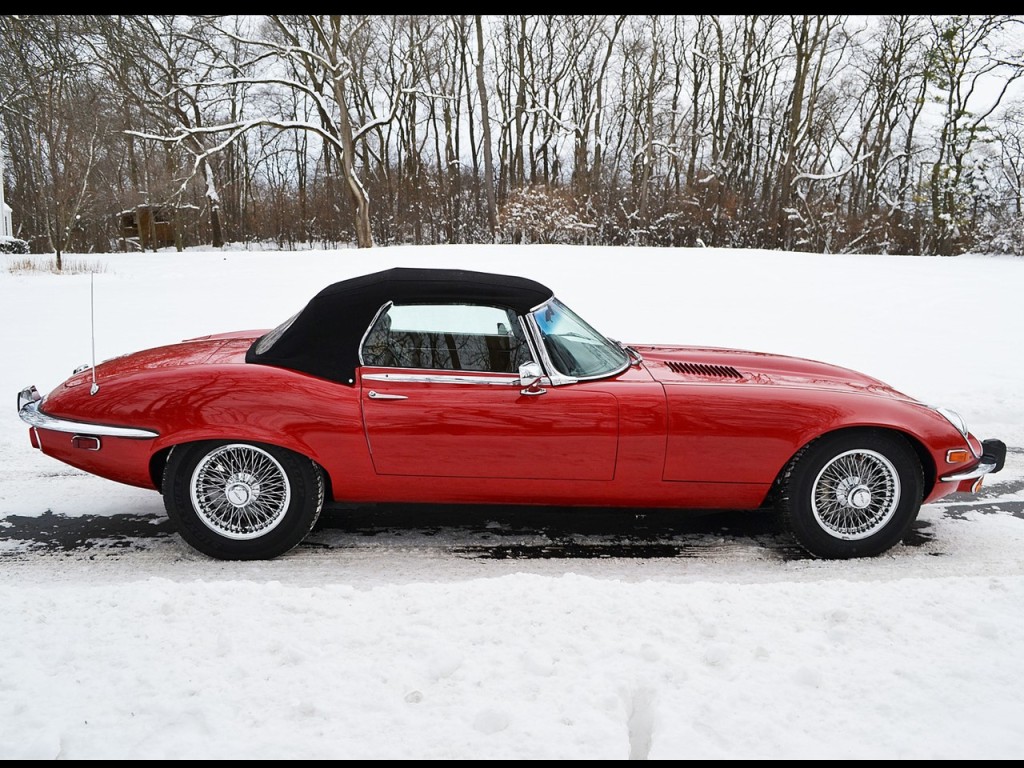 Some of the cat’s standard equipment included a center mounted syncromesh 4-speed stick shift, an instrument panel including tach were designed for accessibility both visually and manually. All metal interior parts were finished in a non-reflective surface. 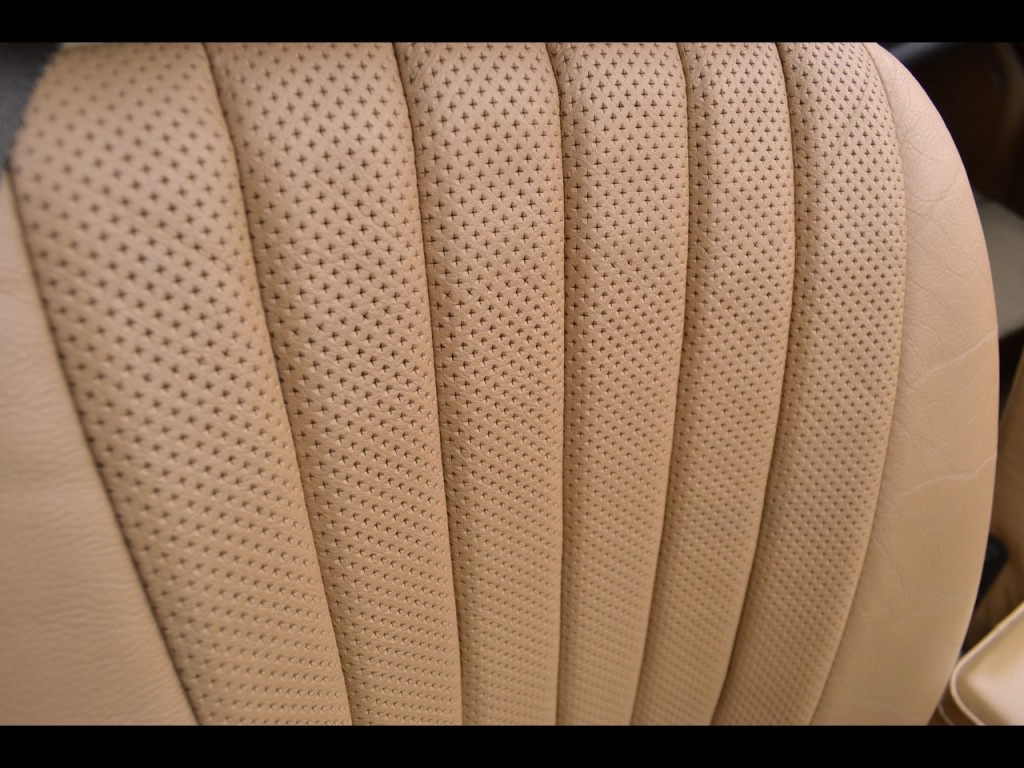 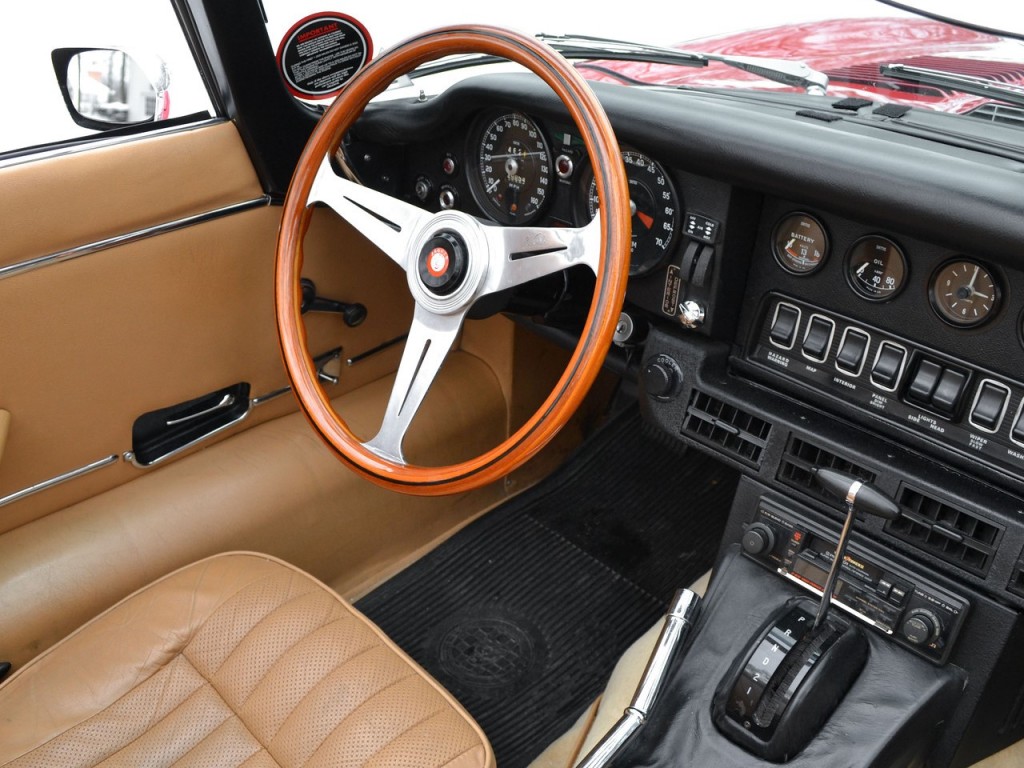 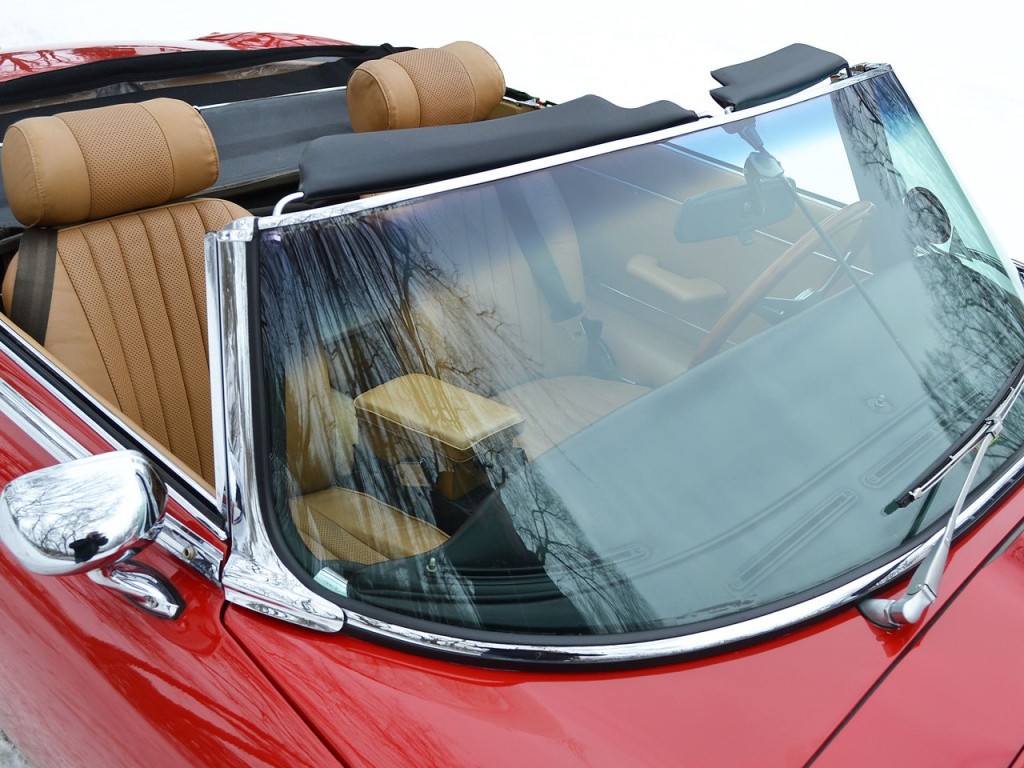 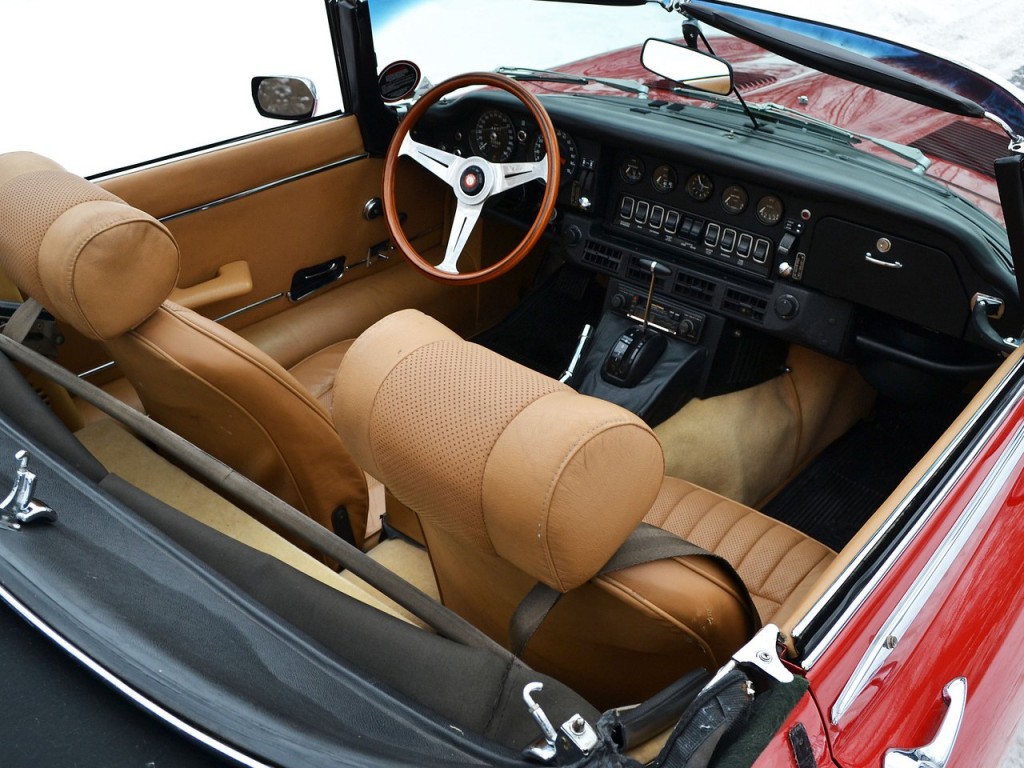 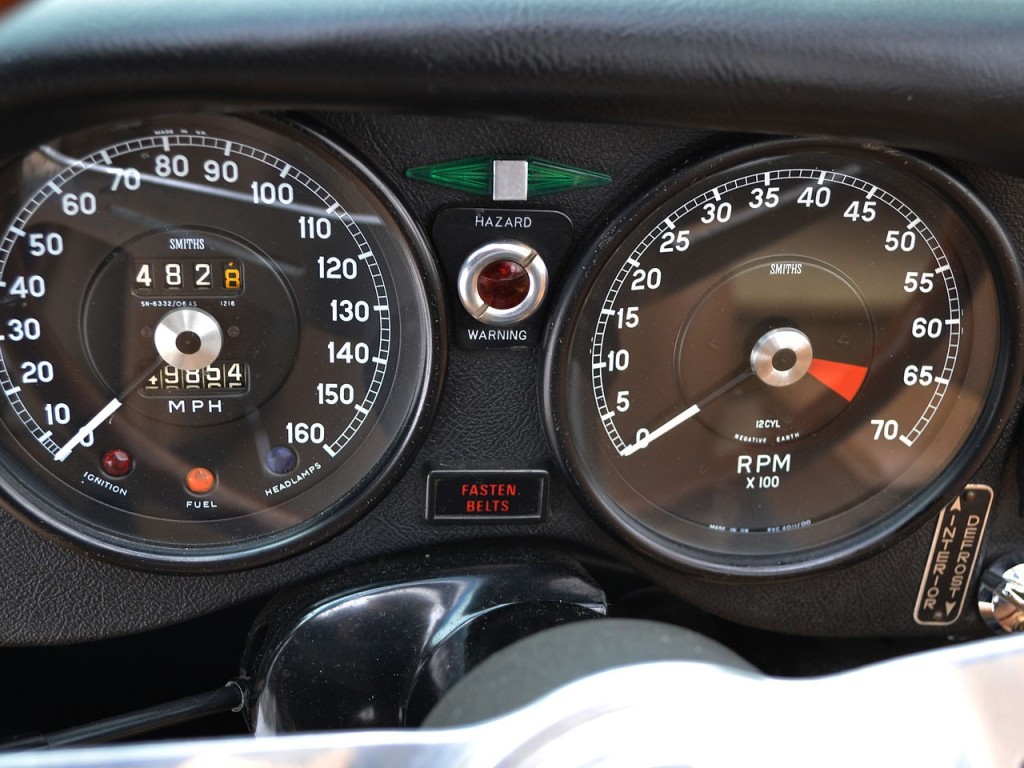 The Jaguar E-Type V12 convertible was the ultimate cat. Long, lithe, and sinewy were the visual attributes of this luxury performance open grand tourer. Powered by the 5.3 litre V12 engine, this cat had the power to leap ahead of the pack.

It purred like a kitten in the city…but tap the accelerator on the open road and it became the fierce animal that shares its name. This Jaguar was like no other cat. The E-Type V12 continued the heritage set forth by the brand. Jaguar set their own benchmarks of what a sports car should be. 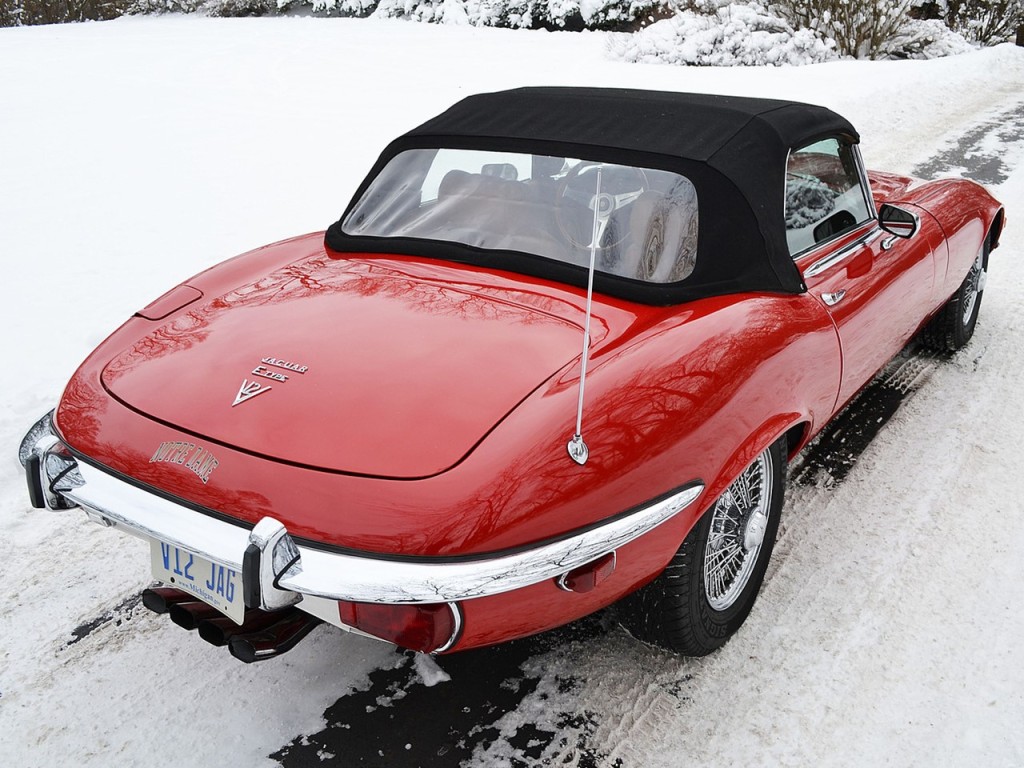 “She’d only come out at night…the lean and hungry type…nothing is new, I’ve seen her here before…watching and waiting, she is sitting with you but her eyes are on the door…” 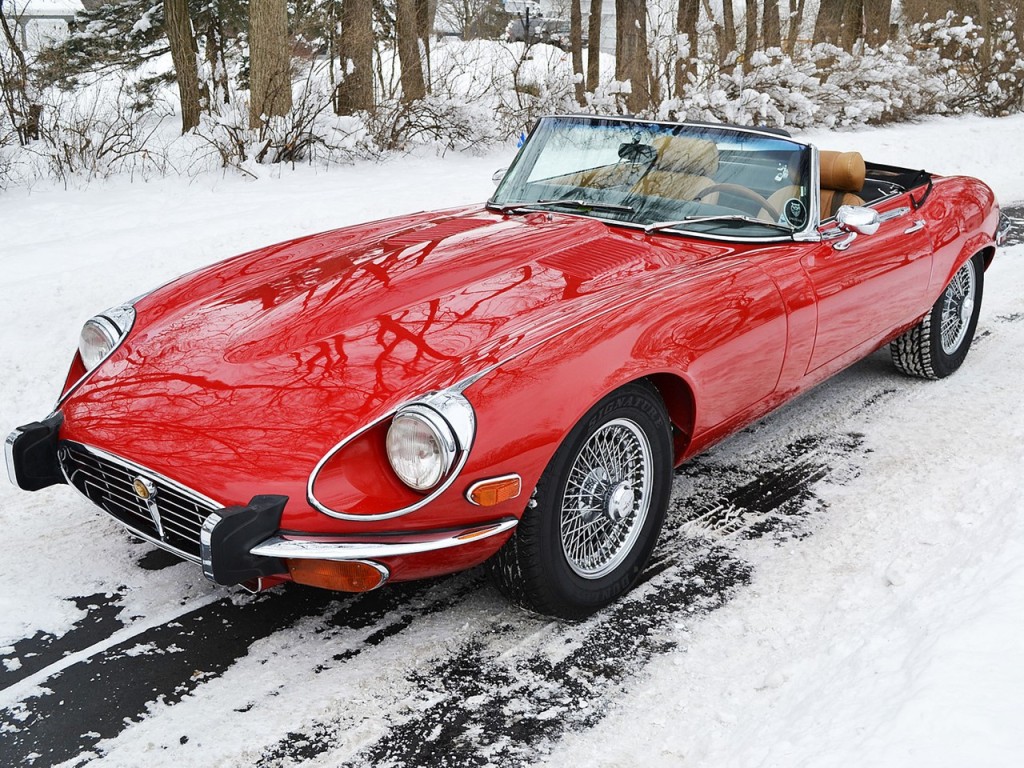 “I wouldn’t if I were you…I know what she can do…she’s deadly man, she could really rip your world apart…mind over matter…the beauty is there…but a beast is in the hall…oh here she comes…watch out boys she’ll chew you up…oh here she comes…she’s a maneater-“ 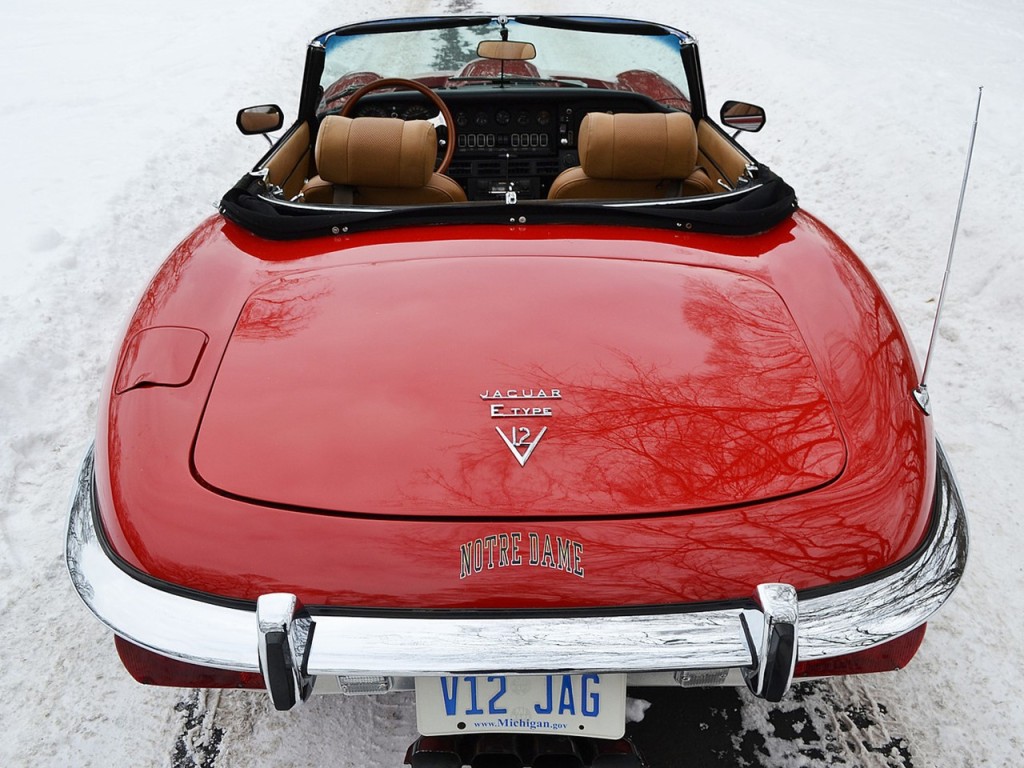 Many thanks to Rodd Sala, Park Ward Motors Museum