……Another example of abstract art from Automobili Lamborghini

Exclusively rare and beautiful, just what one would expect from Automobili Lamborghini. This masterpiece was built at an extremely restricted pace of 20 vehicles. The car I rave about is the 2008 Lamborghini Reventón. Priced at €1 million Euros, this rare automobile offers extraordinary performance and extreme presence.  Lamborghini builds supercars with aggressive style, impeccable road manners, and cutting edge technology. A Lamborghini is and always will be a rolling showcase of technology. Here is the perfect example of another automotive superlative, that is naturally brazen and highly unorthodox from “The House Of The Raging Bull.” The Lamborghini Reventon is a race car in street clothes – 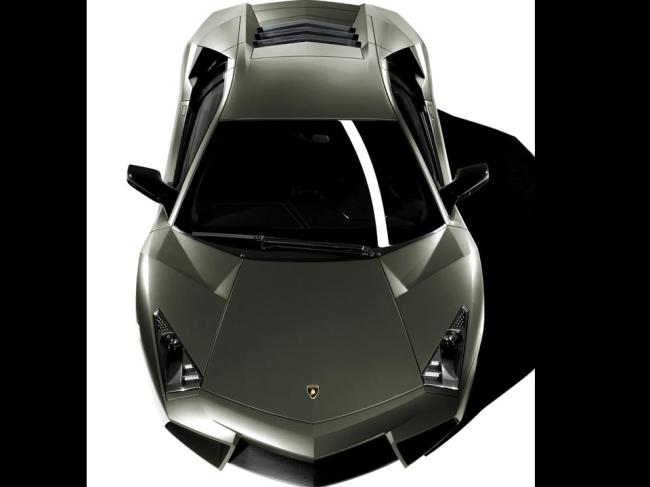 The Reventón was designed at Centro Stile Lamborghini’s R & D division at Sant’ Agata Bolognese, the birthplace of Lamborghini. This dynamic super sports car is suitable for everyday use. Its angular sharp lines are inspired by the latest aeronautics. Centro Stile used the Murcielago LP 640 as the technical base. The name “Reventón” comes from a fighting bull owned by the Don Rodriguez family. This bull is NOTORIOUS for killing the famed bull fighter Felix Guzman in 1943.

The exterior of the Lamborghini Reventón, despite being based on the Murcielago LP 640, is all new in design. “Its interrupted lines and contorted surfaces create a fascinating play of light, giving the car incredible movement….” to quote Automobili Lamborghini. The present day Lamborghini retains the look of power and dynamism from aerospace and its technology. Aerodynamic and extremely efficient, the Reventón’s architecture is made from CFC technology. Carbon-fibre is lighter and stronger than steel. The aerodynamically flat floor structure terminates at the rear with a diffuser that’s an accentuated shape. This ensures excellent overall stability and maximum downforce at high speeds. 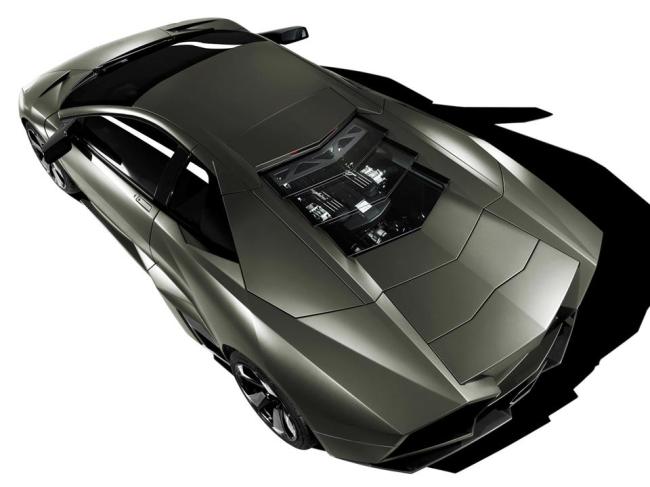 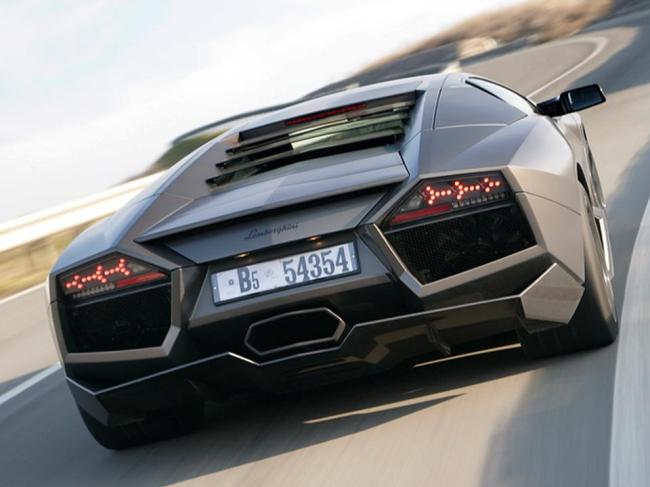 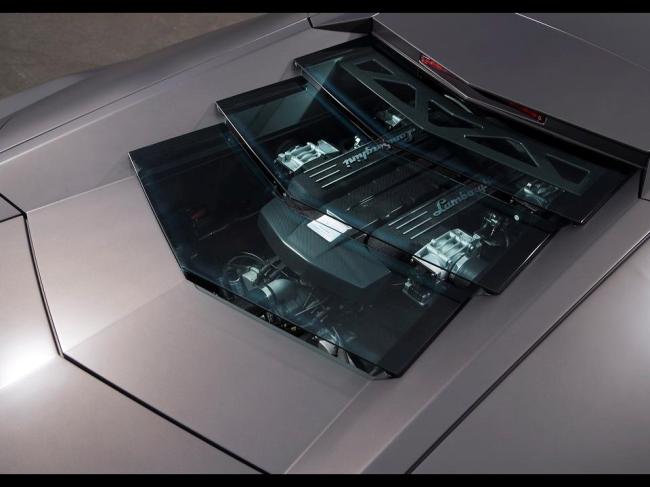 The engine bonnet is made of glass laminate and proudly showcases the V12 engine. The glass features the marked arrow angle that characterizes the design from the front to the rear spoiler. 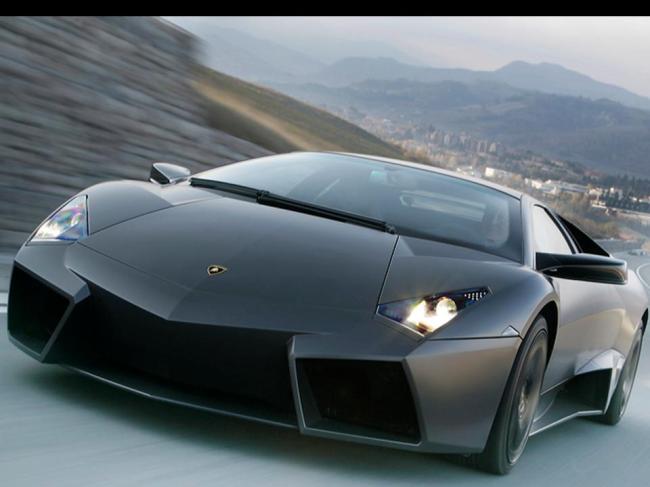 The aggressive front end styling features LED technology lighting. Bi-Xenon headlamps with seven LEDs ensure continuous daylight. The rear tail lamps are fashioned from heat-proof LEDs because of the high temperatures in the lower areas of the car. The tail lamps use a triple arrow effect. 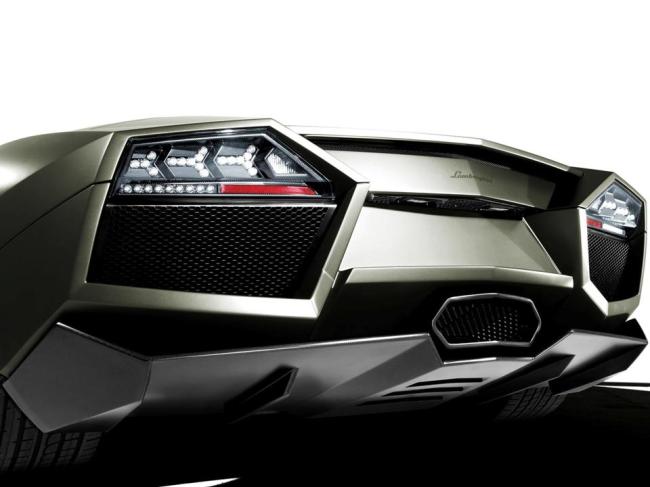 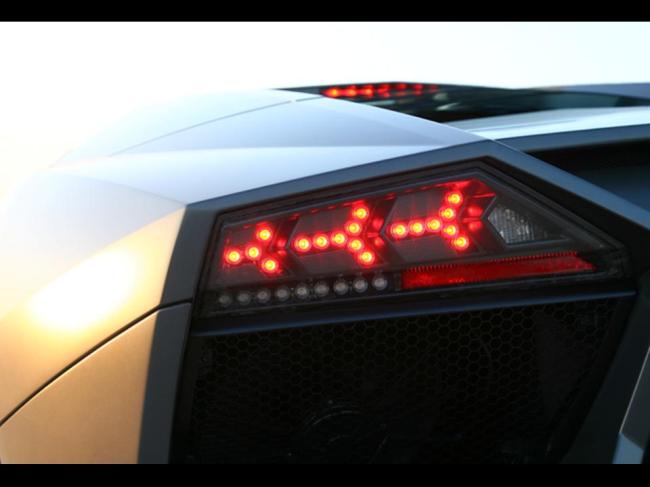 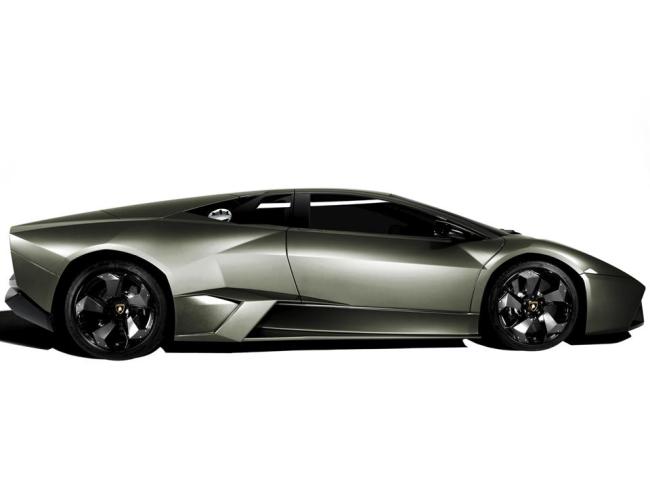 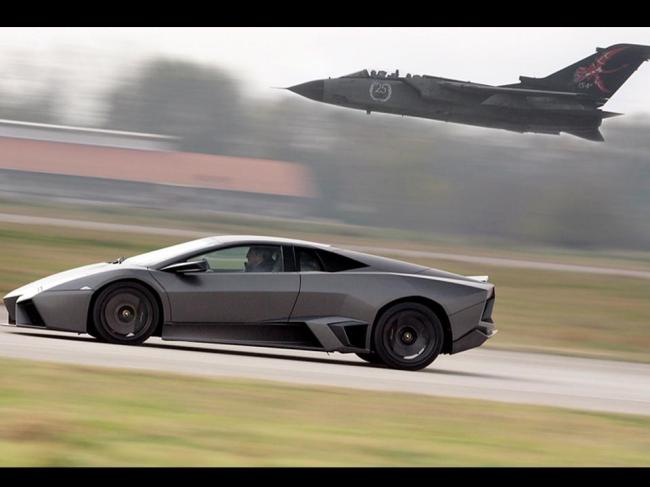 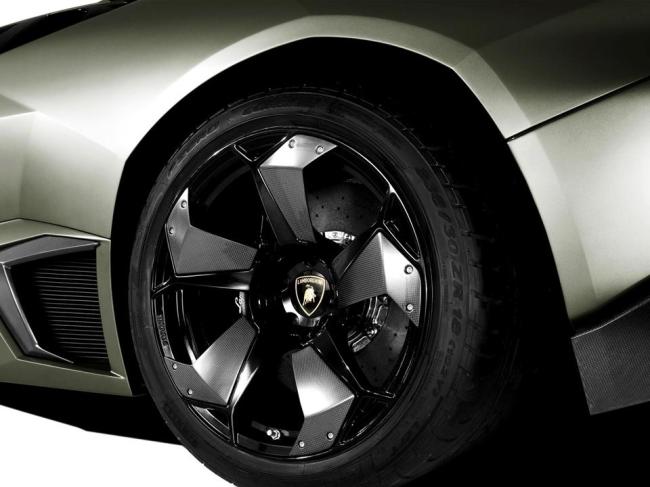 The wheels of the Reventón also get an opaque luster exclusive to this model. Opaque carbon fins are screwed into black aluminium spokes giving the wheels a turbine effect cooling the ceramic brake discs.

The Reventón’s cabin reflects the same aerospace inspired cues as its exterior. An ambience of Alcantara, carbon-fibre, aluminium, and leather harmonize the high-tech sporting attitude of the Reventón. The cabin is inspired by the next generation cockpits as of those used in modern airplanes. The instruments are made up of three TFT liquid crystal displays with innovative display modes.

The “G-Force-Meter” is completely new. This display shows the dynamic drive forces, longitudinal acceleration and braking, and the transversal acceleration around curves. A graduated 3-D grid displays an indicator representing these forces contingent upon direction and intensity of the acceleration. A similar gauge may be found in airplanes. Formula 1 racing teams use the instrument also. 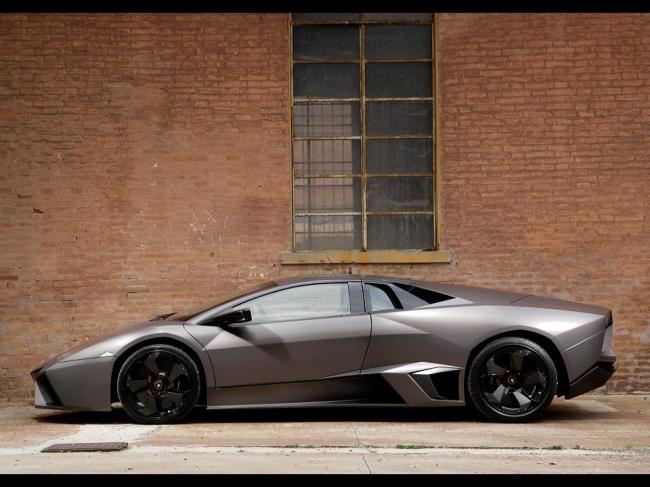 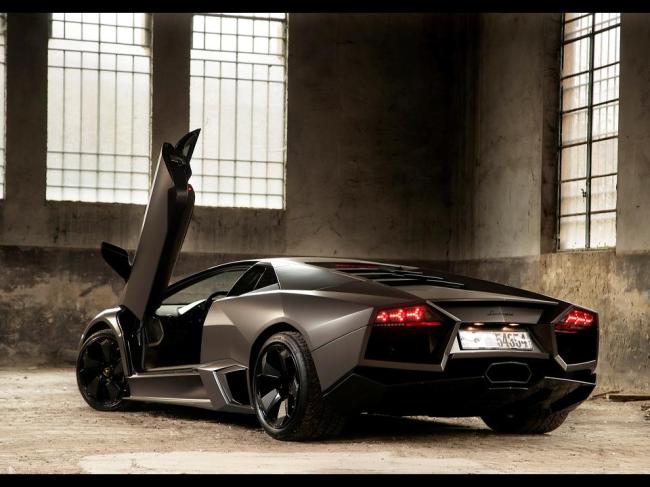 The electronic platform for the Reventón was developed by Automobili Lamborghini. The dash instruments are customizable. The robotized e-gear is controlled by two small levers behind the steering wheel. By selecting a button, the driver can switch to a quasi-analogical display where the classic circular instruments display speedometer and engine speed configured in an innovative way transformed into luminous pilot lamps of varying colors.

Lamborghini developed an extremely refined and efficient process: CAD design and development, and creation of the prototype in the Prototype Department, all carried out under constant supervision of the R&D Department’s technicians and testers.

Since its inception, Lamborghini has been a creator of trends in the world of super sports cars and has always made cars with an absolutely unmistakable character. From the moment they are launched every new Lamborghini promises to be a legend. The Lamborghini Reventón and its exclusivity of only 20 vehicles produced, is a practical illustration of the streamlined functionality and efficiency of the Centro Stile. It took less than a year to go from idea to the finished car. Thanks to the Centro Stile, for the first time in history, the product can be designed in-house without external collaboration. 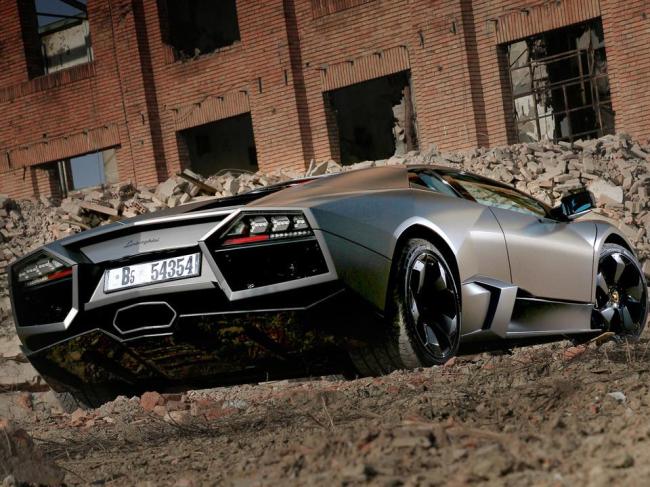 Lamborghini builds supercars. The Reventón is no exception. From the legendary power of its V12 engine, to the sophisticated CFC technology of its bodywork, this aerodynamic envelope is a 21st Century masterpiece…..from the master craftsmen. Just another example of an automotive superlative from Sant’ Agata Bolognese with love…the world loves you! (You know….) 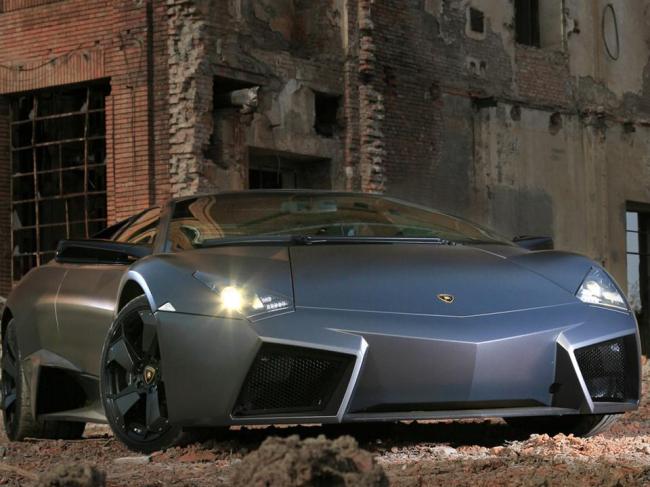 ……..Click on the photos to make them screen size as with all my blogs