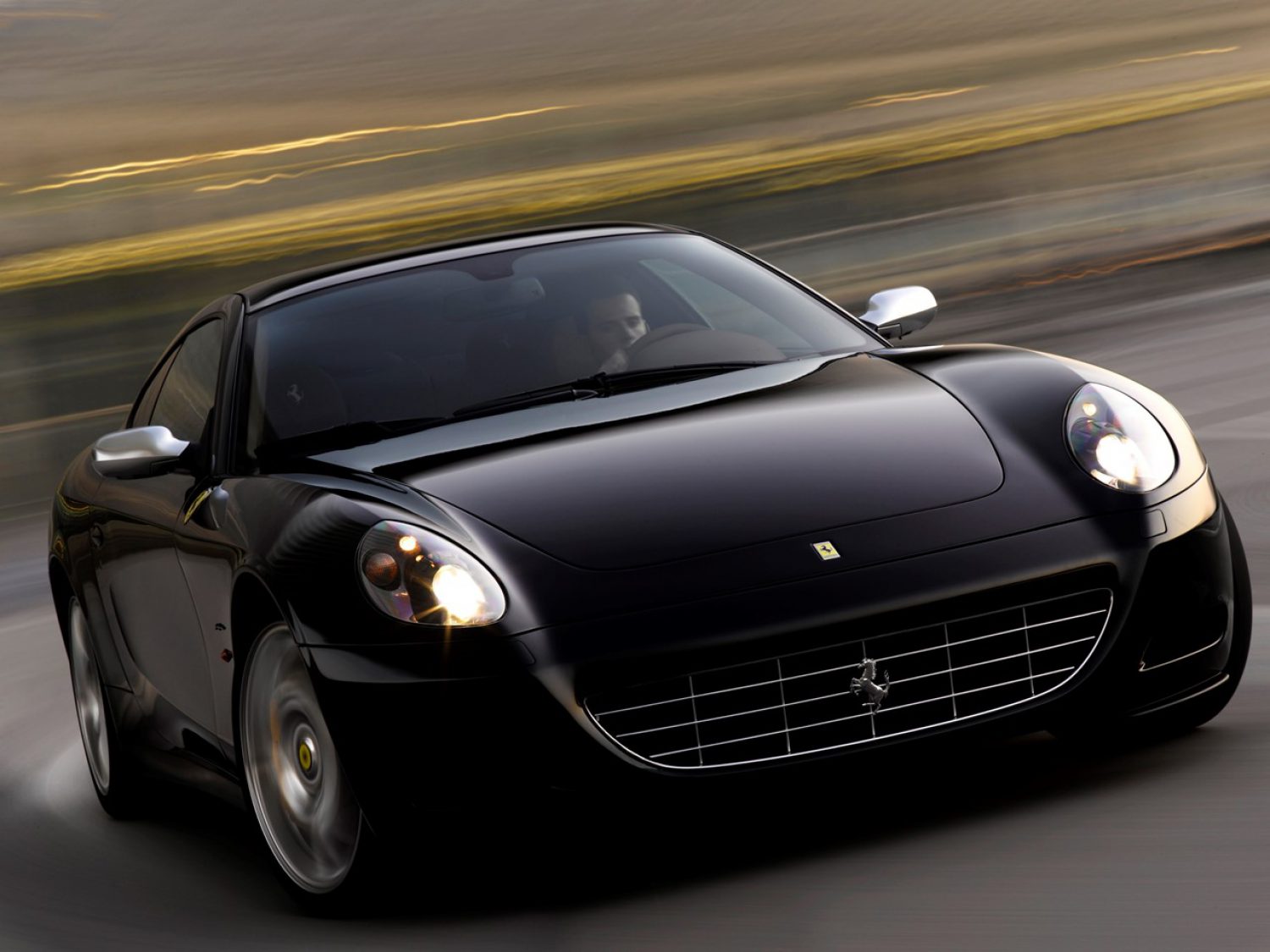 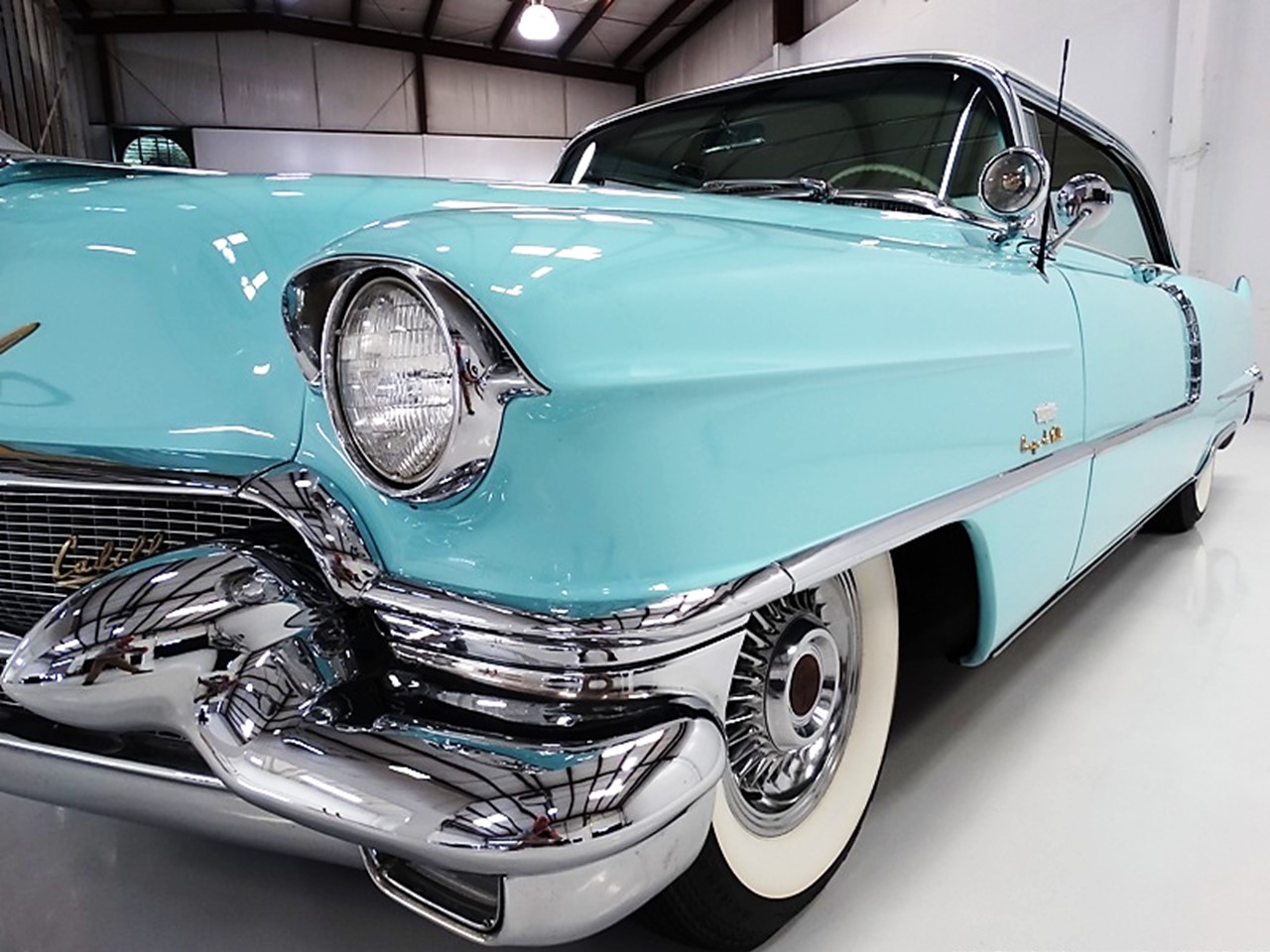 …in the continuing saga of “As the Standard of the World Turns.”

The pillarless hardtop body style became America’s first choice among automotive design. It took the entire industry by storm during the 1950s. This styling concept is the brainchild of Harley Earl, chief design stylist for the Cadillac Motor Division of General Motors. This distinctive body style was introduced in 1949 as a unique trim upgrade option for the Series 62 two-door coupé as the magnificent Coupe deVille.

Brilliantly new in concept; it was an ideal introduction for a refreshingly new era in automotive design which left the 1940s far behind. The pillarless hardtop design was the industry’s most desired as witnessed by the 1956 Series 62 Coupe deVille. This avant-garde example of automotive excellence makes a cameo appearance…in the continuing saga of “As the Standard of the World Turns.” 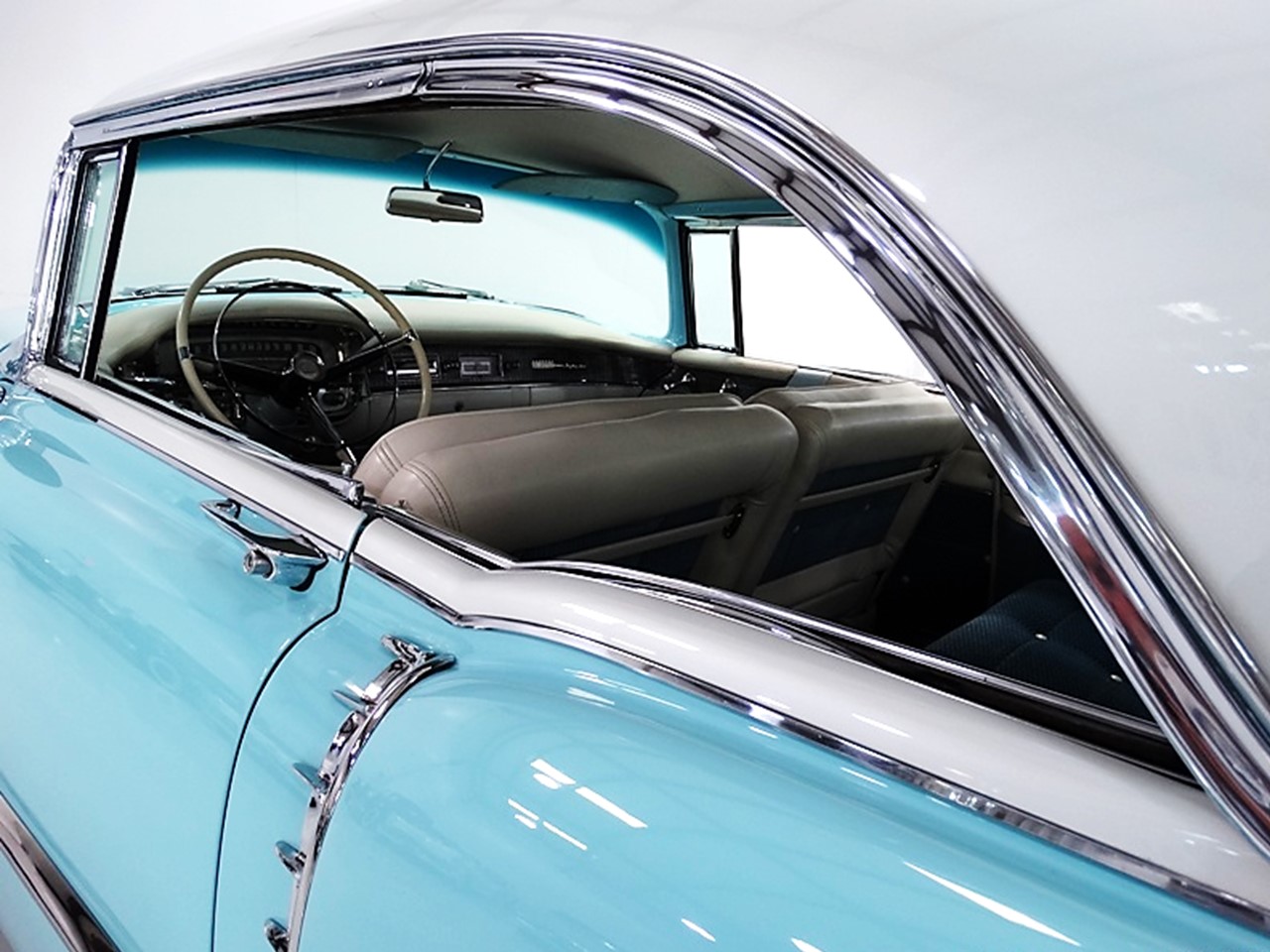 It is General Motors that introduced the hardtop coupé to the American highways. This distinctive design was unveiled at the 1949 Motorama along with the Oldsmobile Futuramic 98 Holiday hardtop coupé and the Buick Roadmaster Riviera hardtop coupé. It is a look that no other car had ever offered…it mocks a convertible with its roof raised. The interior has chrome bows as part of the headlining to simulate convertible hardware, sumptuous leather upholstery like a convertible, and power windows. Cloth with leather upholstery became available for later model years.

The idea was spawned when the wife of a GM designer, always drove a convertible but never put the top down…when she was asked why, she replied: “I just like the way it looks!” The pillarless hardtop body style made cars look longer and more distinctive than the stodgy, pillared sedans. Many wonder why this distinctive design ceased. Well, there are issues involving safety. Today’s death traps could never be hardtops because their superficial, kitschy-faux engineering could never withstand a “T-bone” collision. Today’s rolling coffins require those sedan pillars “just in case”…well, you asked! 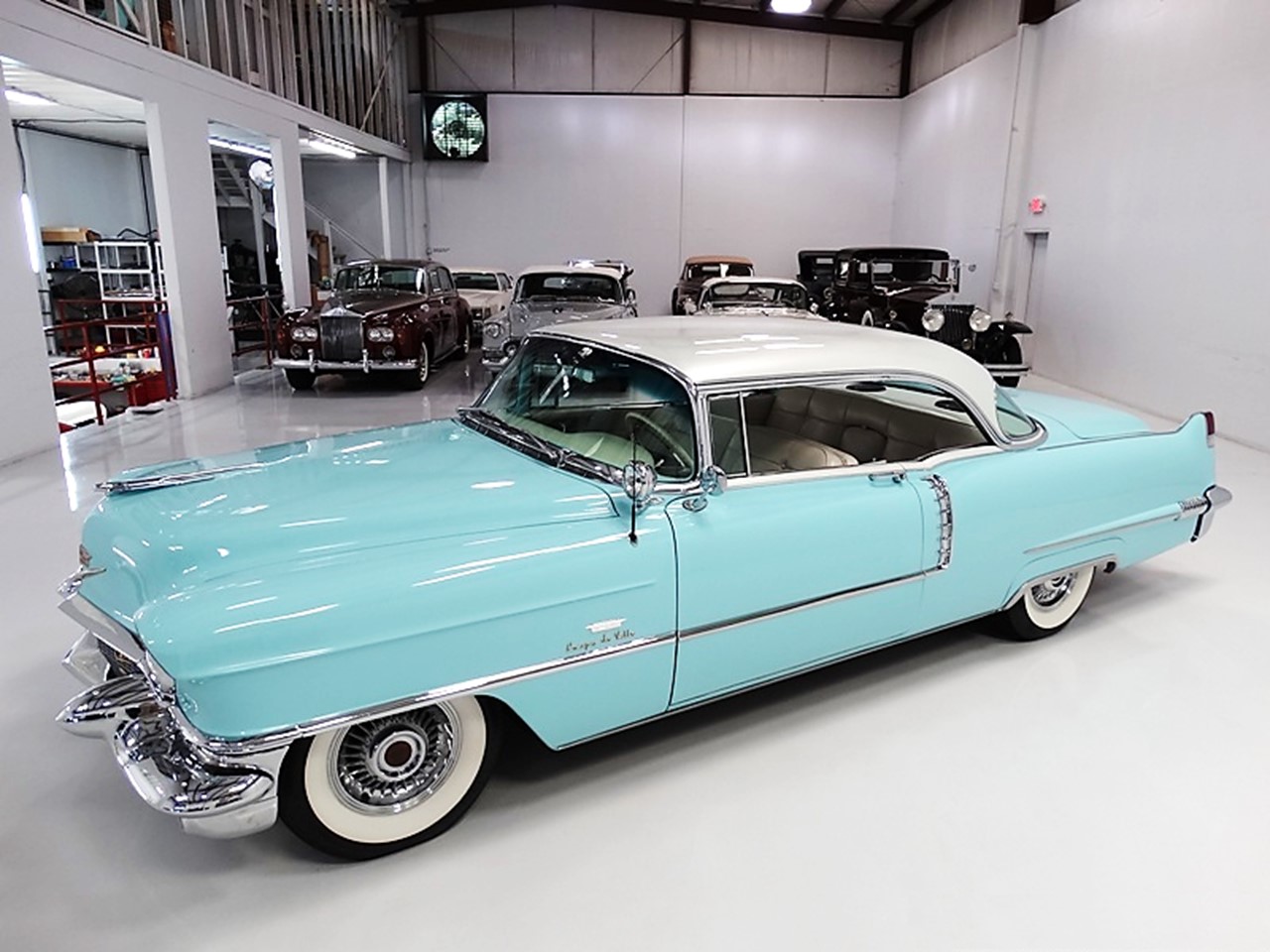 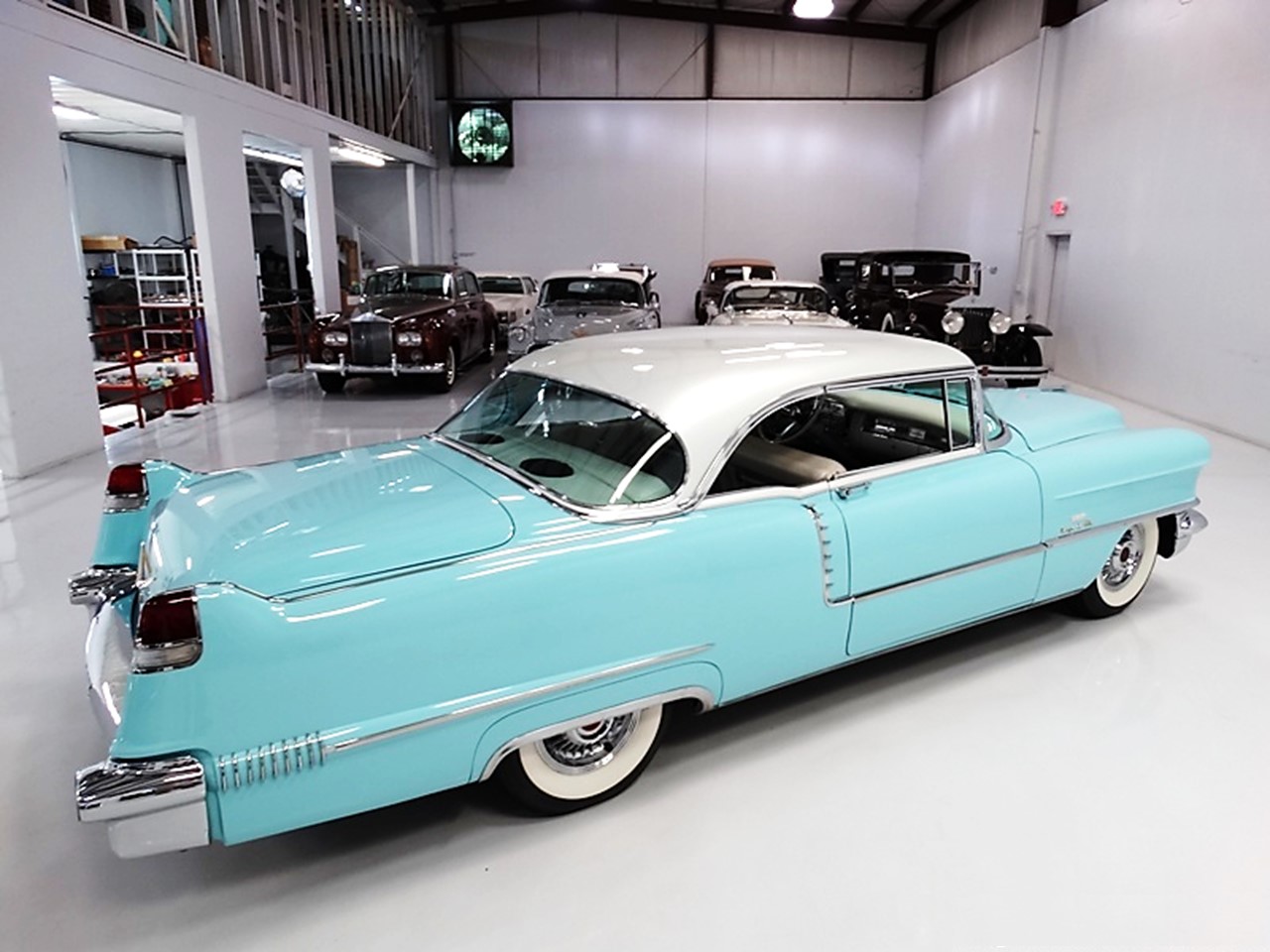 The 1956 Series 62 Coupe deVille exhibits extraordinary craftsmanship that was unrivaled in the automotive industry. Its unpretentious grace and quintessential charm are complemented by the Cadillac “Magic Carpet” ride. The magnificent Series 62 Coupe deVille was the perfect choice for those who sought comfort and beauty with a spirit of adventure. The dramatic elegance and majesty of this unique design are eloquently portrayed in the pillarless hardtop styling of the Coupe deVille.

Seldom had an automobile been bestowed with such élan as this great motorcar. Its classic simplicity of design makes it stand out among the world’s finest automobiles. The hardtop Coupe deVille was such an immediate hit with luxury car buyers, a four-door hardtop sedan variant was introduced in 1956 as the Series 62 Sedan deVille. Both Coupe and Sedan deVille became America’s favorite luxury cars. The DeVilles were the elite luxury cruisers that tickled the fancy of high-end automobile buyers. There was an exclusive “air” about a two-door Cadillac…the Coupe deVille exemplified this.

The Coupe deVille was the celebrity among Cadillacs. It retained the poised dignity which was the hallmark of every Cadillac. Refinement, superior craftsmanship, and legendary Cadillac engineering are immediately apparent with the 1956 Series 62 Coupe deVille. Throughout the 1950s, Cadillac took a dramatic step forward in automotive design and craftsmanship.

The brand never set forth capriciously…millions of miles of testing and scrutiny went into every Cadillac motorcar before it ever reached the buyer. In fact, it is the 1954 through 1956 Cadillacs that gave the brand its identity. The tail fins are the key; they were renown throughout the world. With body by Fisher and interior by Fleetwood, the 1956 Series 62 Coupe deVille is a superb example of impeccable craftsmanship and attention to detail. 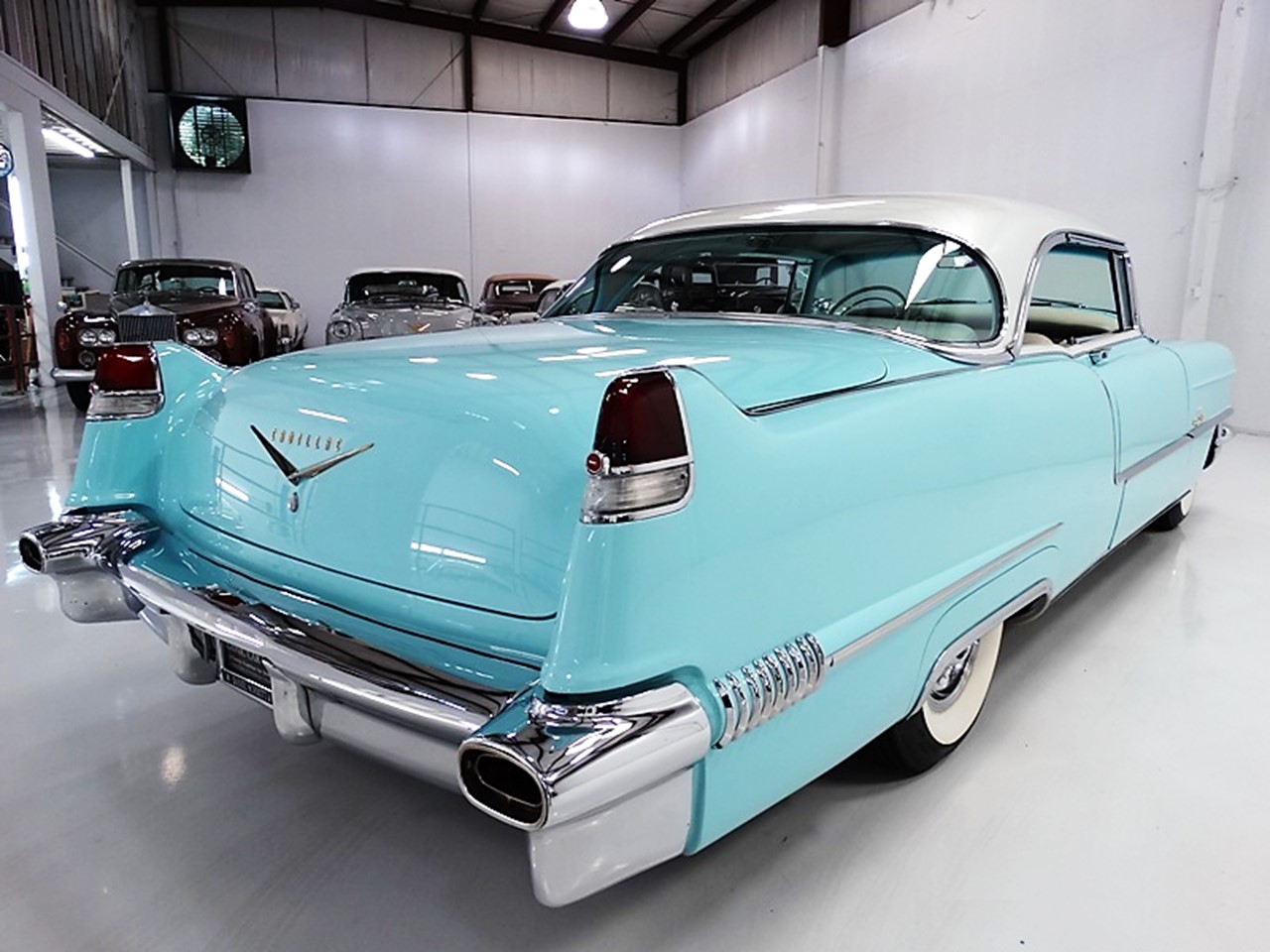 The Coupe deVille is more lavishly trimmed than the standard Series 62 counterpart which is what made it popular. It began as a luxurious trim level for the Series 62 and evolved into its own series for the 1959 model year. The Coupe deVille is one of the longest and most successful model production runs in the history of the brand; running from 1949 until 1993. The Sedan deVille ran from 1956 until the 2005 model year, in 2006 it was renamed “DTS.”

The 1956 model is a freshened version of the 1954 design. It received a mild Cadillac “beauty treatment” with a revised front end ensemble to include a new hood, bumper, and grille that makes it appear lower. The rear end design received a new bumper. The subtle revisions makes the entire car look longer, lower, and wider than previous models. Its traditional beauty and luxury makes it another stunning, supreme achievement in motoring from the master craftsmen.  It is a two-door coupé with sedan attributes…its six passenger spaciousness rivals the competitor’s four-door model in comfort.

All Cadillacs for 1956 are a masterpiece of symmetry and balance. From the daring front end ensemble augmented by highly polished Dagmar bumper guards…to the sweep of the elegant tail fins, the 1956 Cadillacs were an irresistible invitation to luxury that few could resist. This brilliant new interpretation of Cadillac-style set new standards for dramatic design and elegance for the entire automotive industry. The 1956 Cadillac Series 62 Coupe deVille resulted in an elegant motorcar for devotees of perfectly ordered splendor. 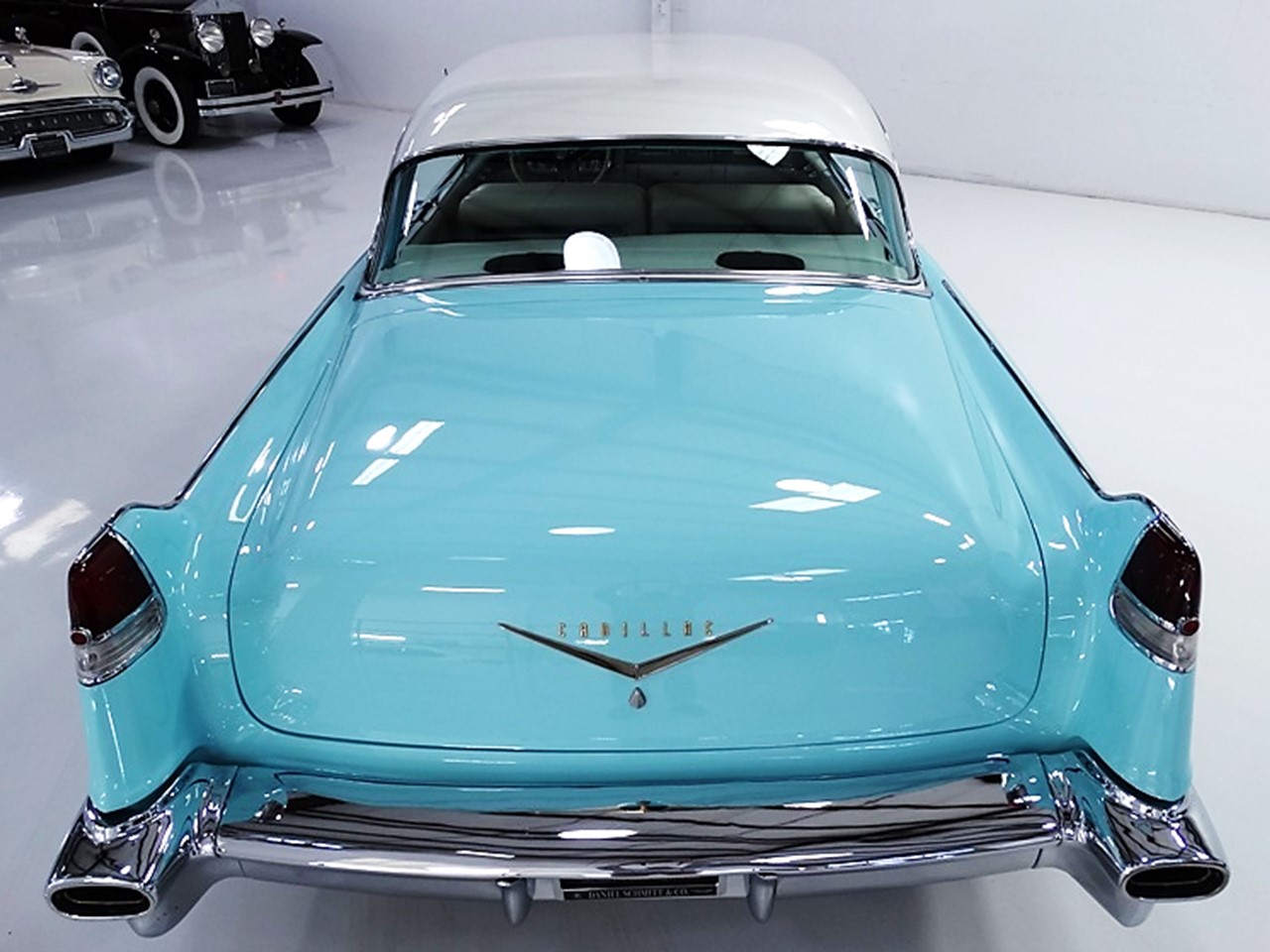 The 1956 Series 62 Coupe deVille is an eminent realm of motoring majesty. It has all the virtues that make a Cadillac a Cadillac. The luxury is evident in the richness of its exclusive interior appointments.  A large folding center armrest is standard for rear seat passengers. Its pillarless hardtop design lends an airy touch with excellent all around visibility. With its extraordinary exclusivity and supremacy in a luxury motorcar, there was no more exciting manner in which to experience Cadillac and style. In addition to the luxurious leather upholstery, handsome Bombay or Stardust metallic nylon with leather bolsters was also available. 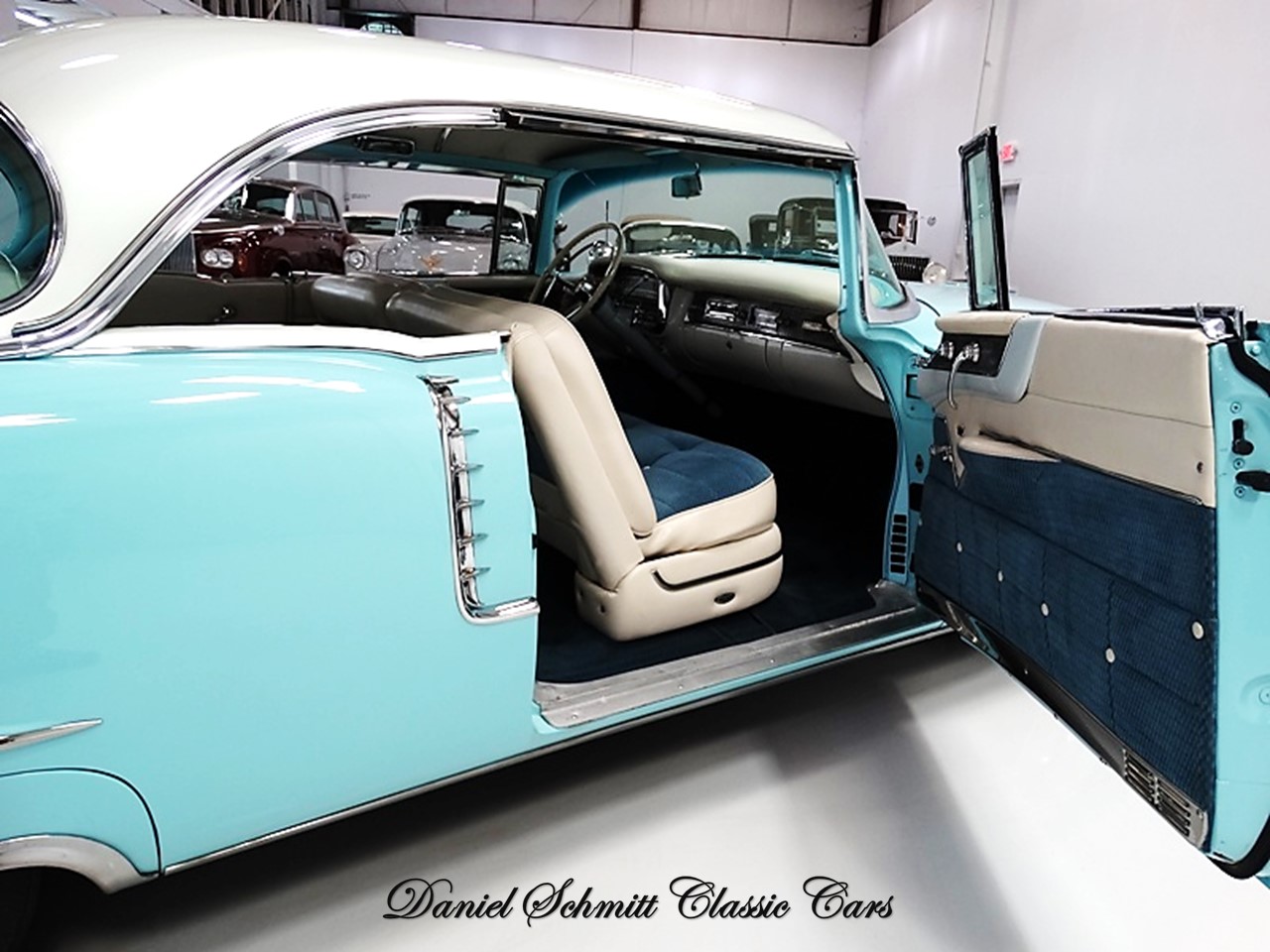 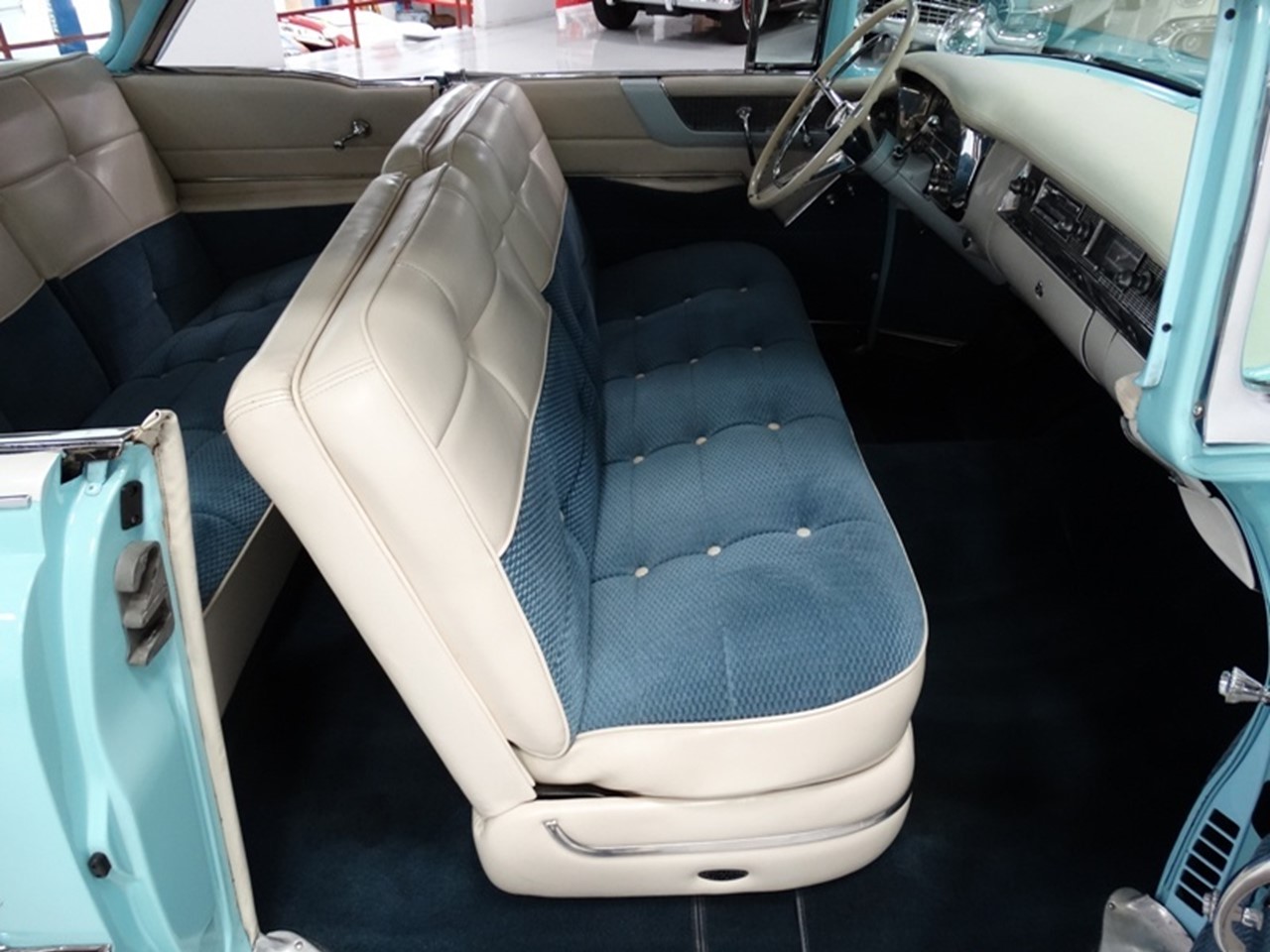 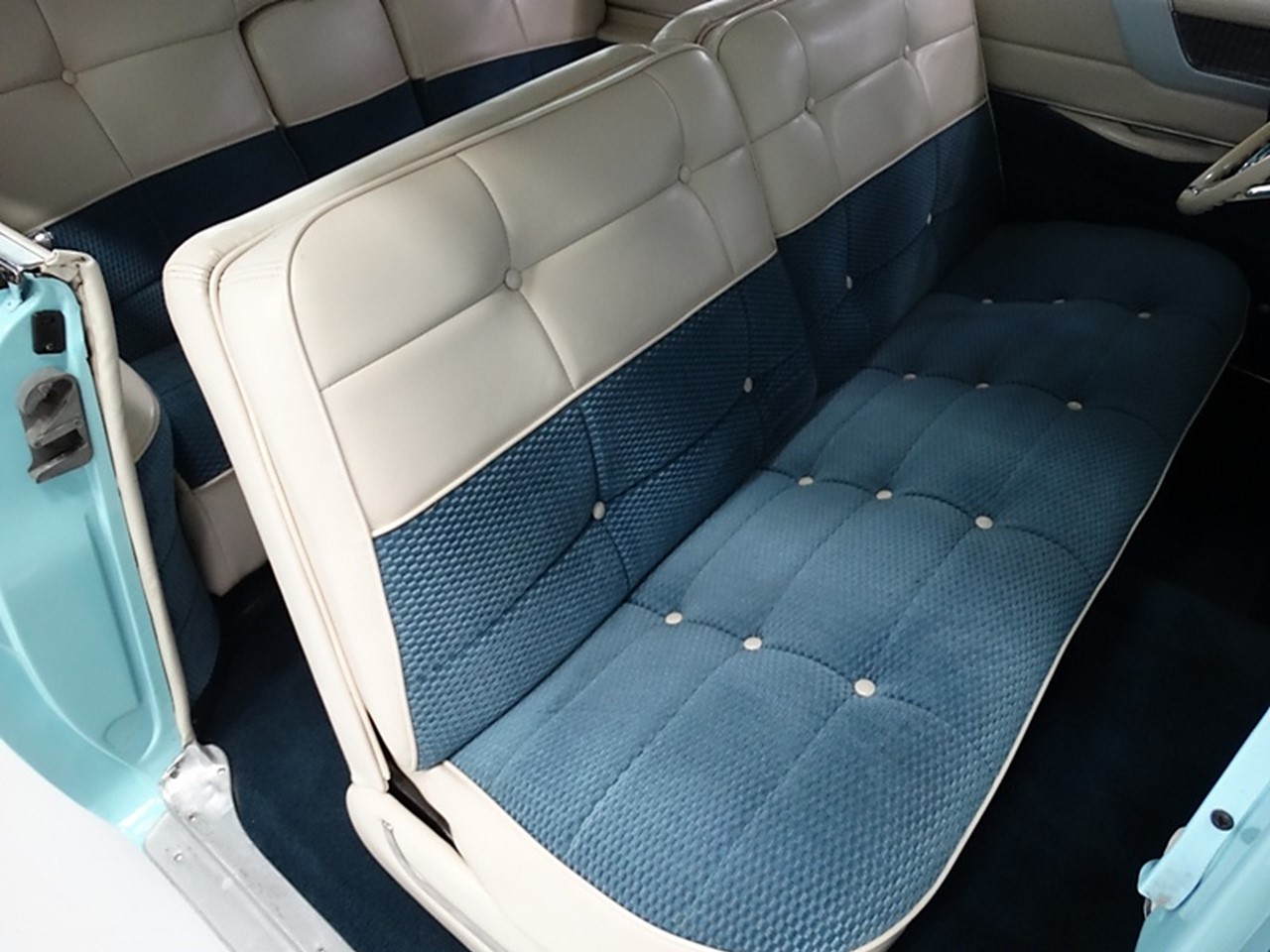 The 1956 Series 62 Coupe deVille is powered by GM’s 6.0 litre 16-valve 365 CID V8 engine. The engine runs in five main bearings. It has a cast iron block and cylinder heads for durability. It is equipped with a Carter WCFB 2370S 4-bbl carburetor with equalized manifolding, automatic choke, hydraulic valve lifters, mechanical fuel pump, and intake silencer. The engine is mated to GM’s Hydra-Matic (Jetaway/Flashaway) 3-speed automatic transmission which had been refined with an increase in size to facilitate smoother overall shifting qualities. 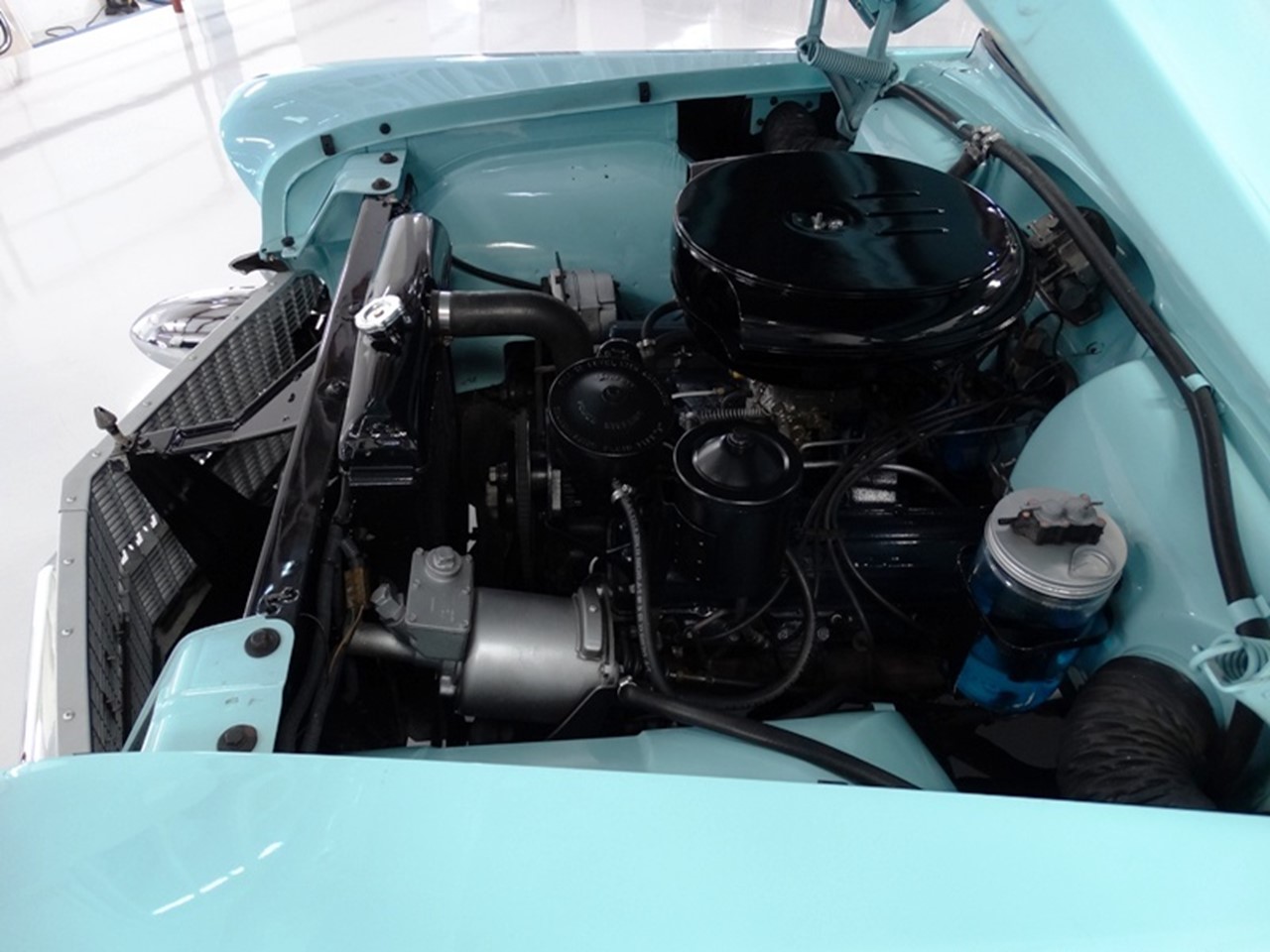 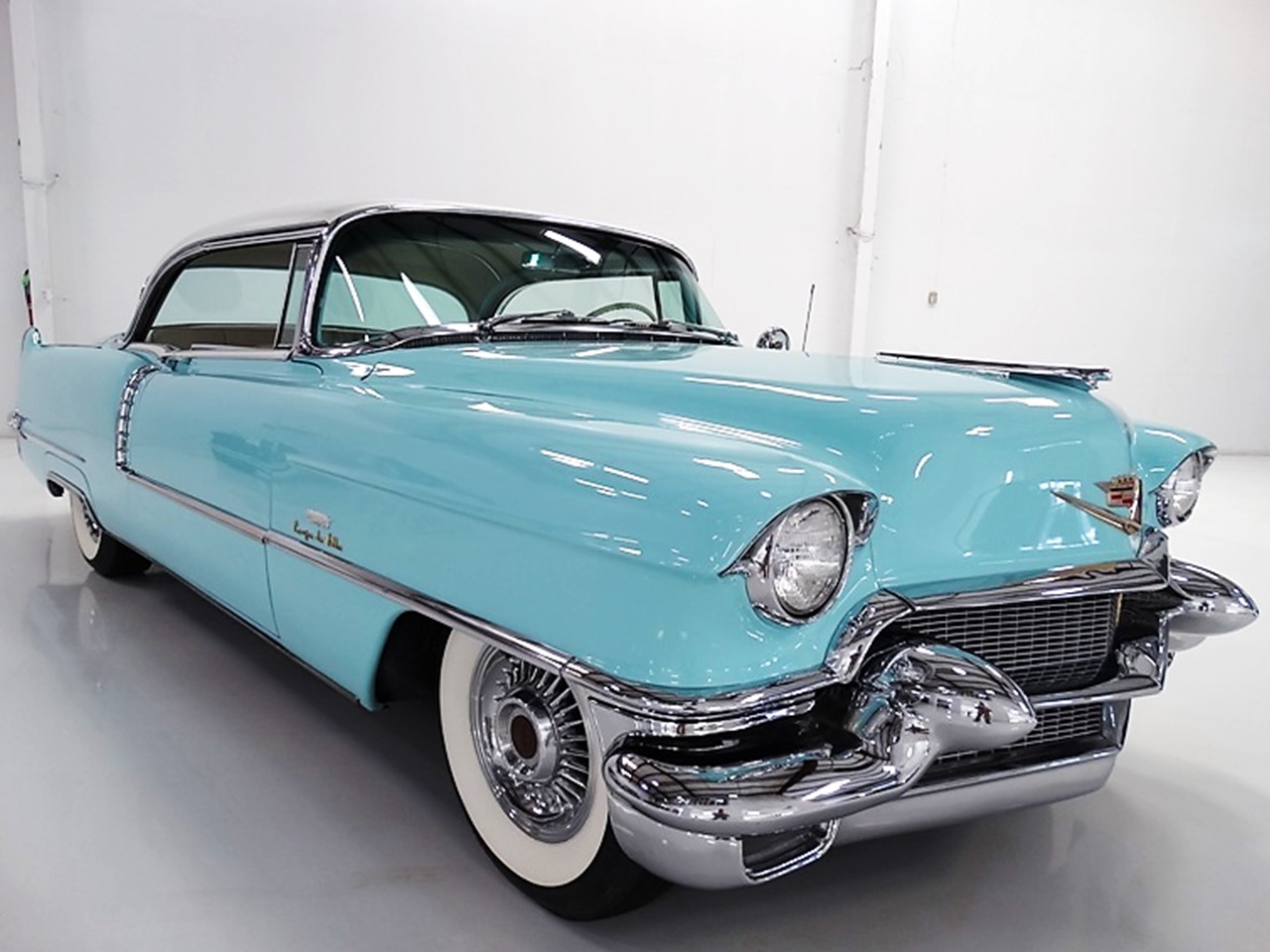 The 1956 Cadillacs are as rugged as they are rewarding. They are built as body on frame construction. The sturdy “I-beam X-frame” was the strongest in the industry at the time. This was new for the 1956 model year. Construction of this type was usually reserved for convertibles because it is sturdier with a lower center of gravity. The rugged cross member provides a sturdy support for the engine, steering, and front suspension components.  The perfect 50/50 weight distribution assures excellent traction and overall performance.

The rigid steel floor is reinforced by rugged ribbed sections and is welded to box girder rocker panels, and vertical side pillars. There is a heavy gauge steel skeleton creating a virtual ring of steel surrounding the passenger cell. Even the Coupe deVille’s doors are solid vault-like structures. They are formed from two panels of heavy gauge cold-rolled sheet steel formed into a rigid self-reinforcing box-like assembly. They are precision hung on tough steel hinges for that all so perfect shut line. The engineers created the Coupe deVille as they would a ragtop because of its pillarless design. It is built to refrain from squeaks and rattles. 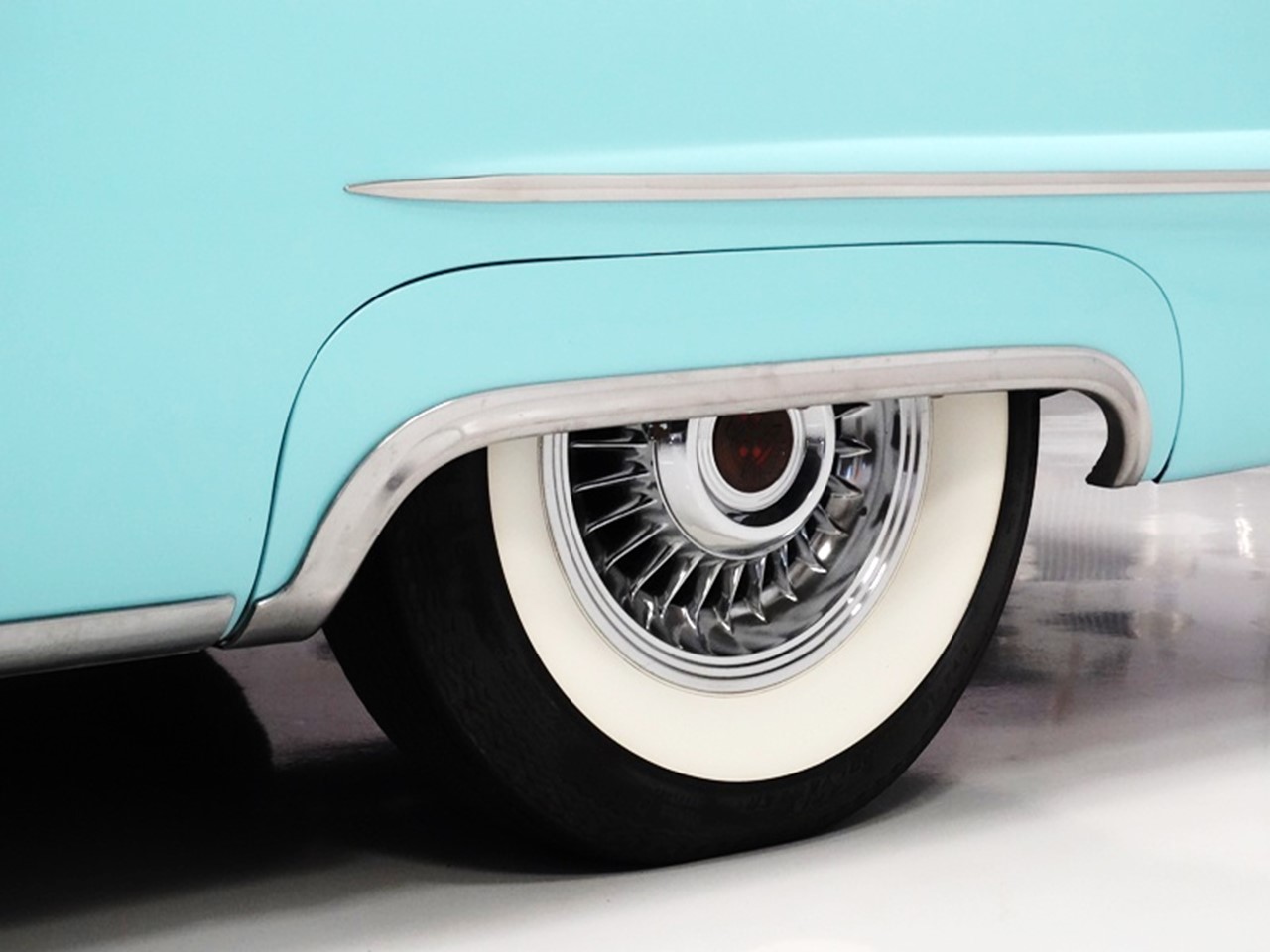 The front suspension uses individual coil springs with sturdy upper and lower control arms. The rear suspension uses the Hotchkiss Drive system, a method of transferring the thrust of the rear wheels to the frame through the rear springs. Unsprung weight is minimized with this type of build.

The rear axles are the semi-floating type and are cut so that the driving pinion meshes with the ring gear well below the center line of the differential. This type of assembly facilitates a lower profile for a modern, contemporary look. The low drive shaft, low floors and low rear floor tunnel results in a road-hugging overall design. The mid 1950s introduced a different trend in automotive designthat is longer, lower, and wider creating a contemporary look for the day leaving the past to history. Cadillac was an automotive trend-setter. 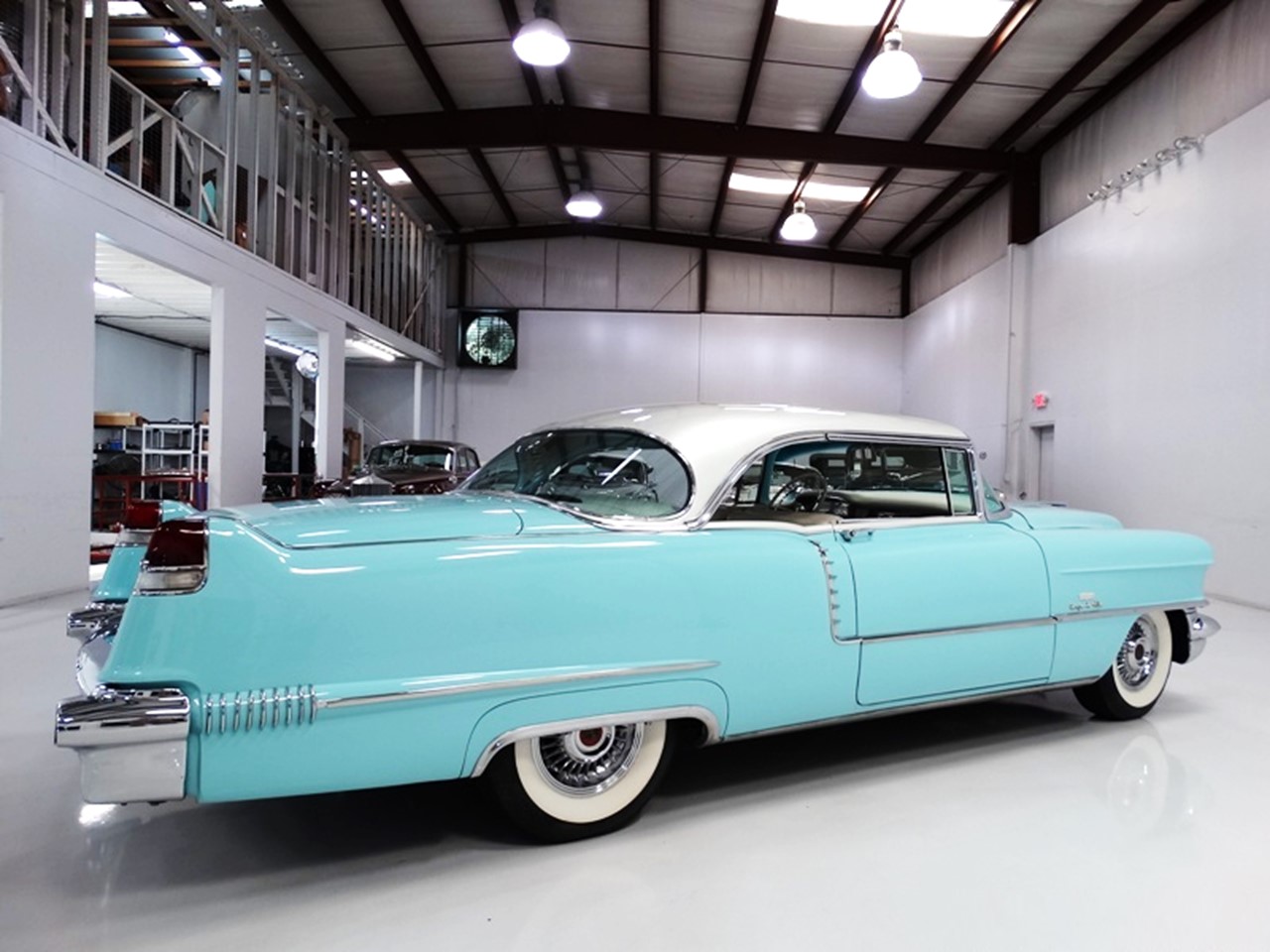 Cadillac was the luxury leader for the 1950s. The Series 62 Coupe deVille is the elite luxury cruiser that captured the fancy of high-end automobile buyers. The Coupe deVille was the essence of exclusivity retaining the poised dignity that was the hallmark of every Cadillac. The 1954 through 1956 model years further established the brand’s identity reinforcing the consummate luxury proclamation set forth as the “Standard of the World.”

The 1956 Series 62 Coupe deVille created a new inspiration for all motordom with its precise craftsmanship and universal appeal. Never before had a motorcar become so captivating, elegant and meticulously engineered. The Coupe deVille is unmistakably Cadillac in stature and majesty. It inspired the entire automotive industry for many years to come. The 1956 Cadillac Series 62 Coupe deVille once again takes the spotlight center stage…in the continuing saga of “As the Standard of the World Turns.” 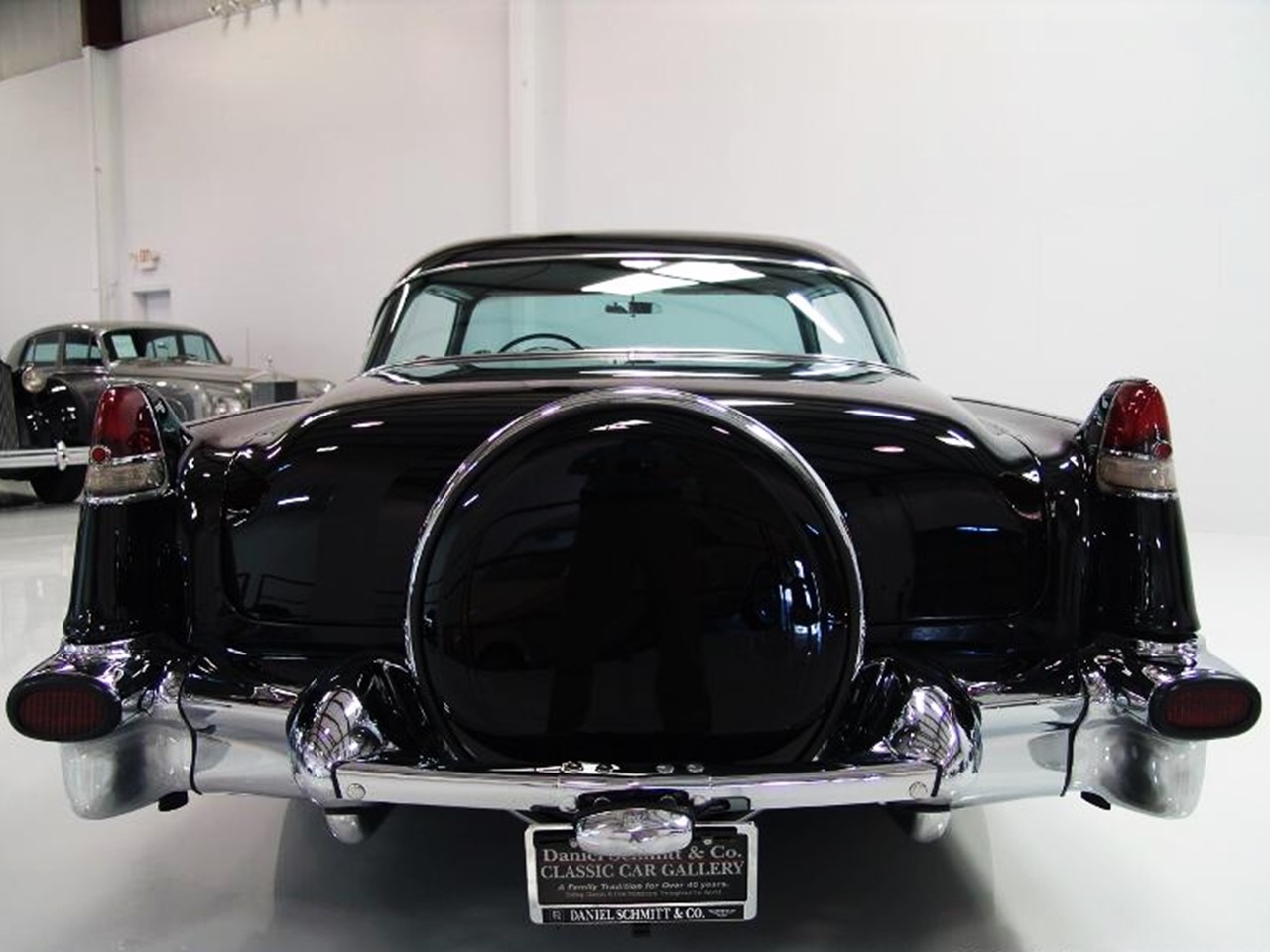 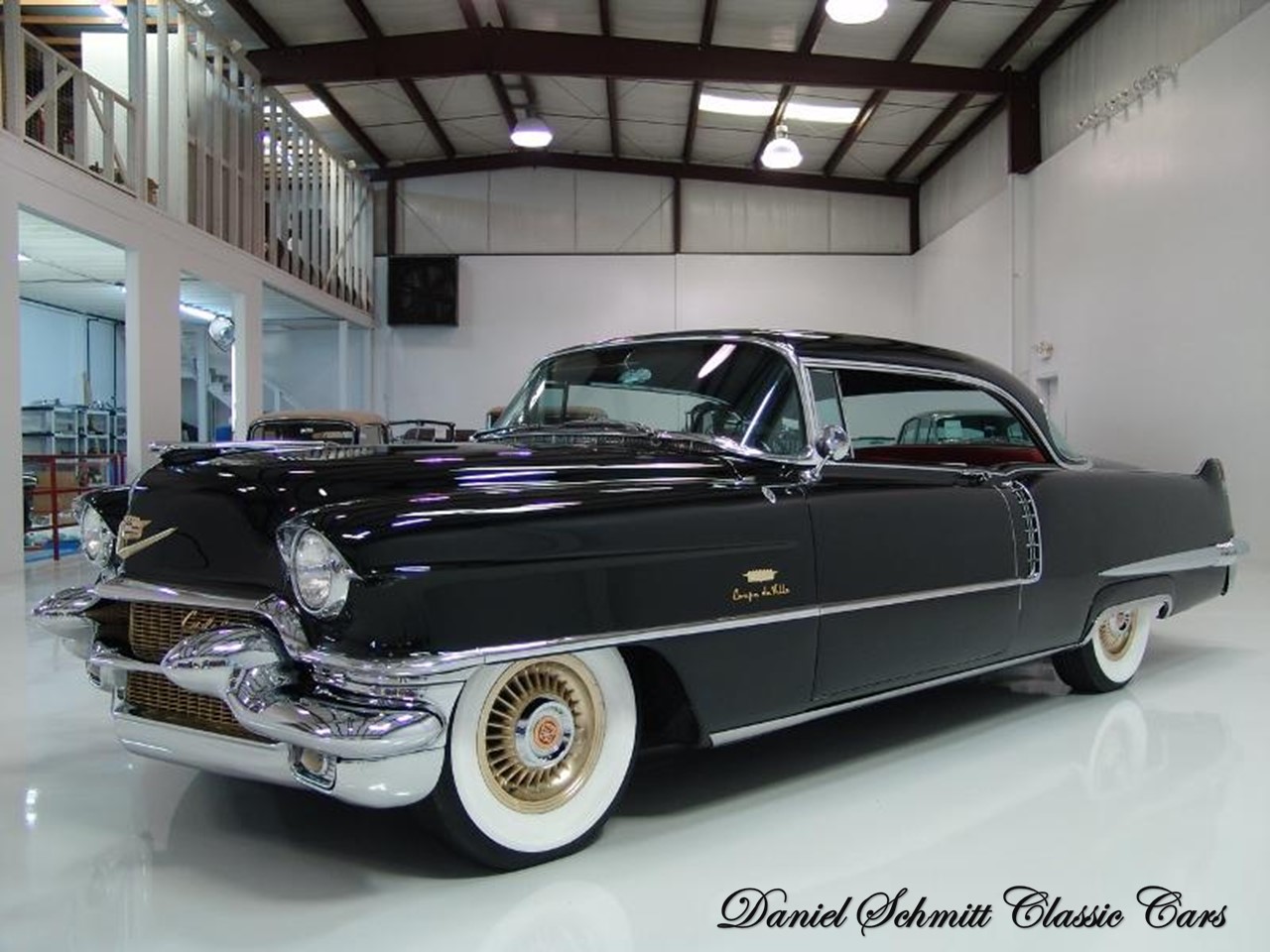 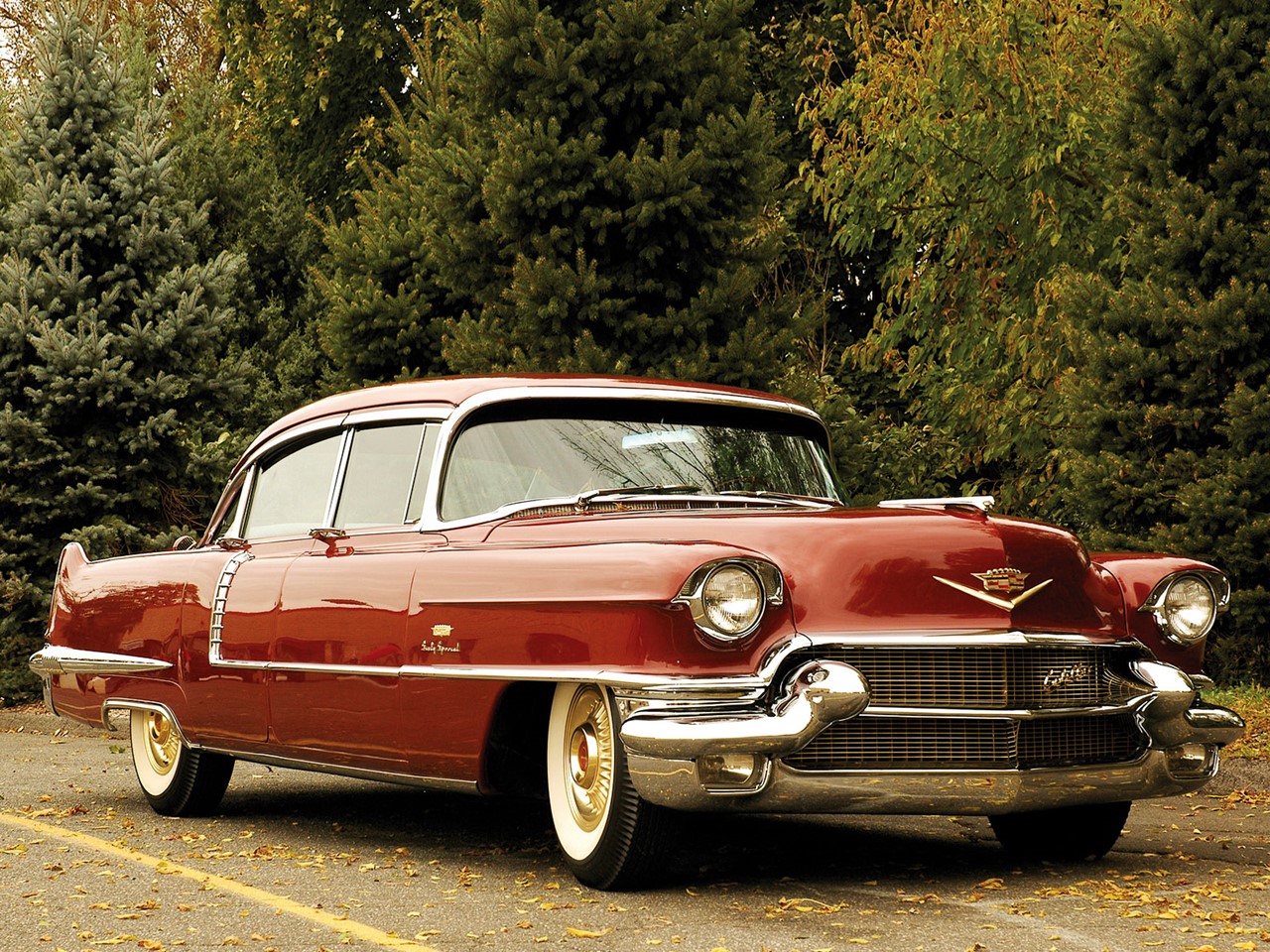 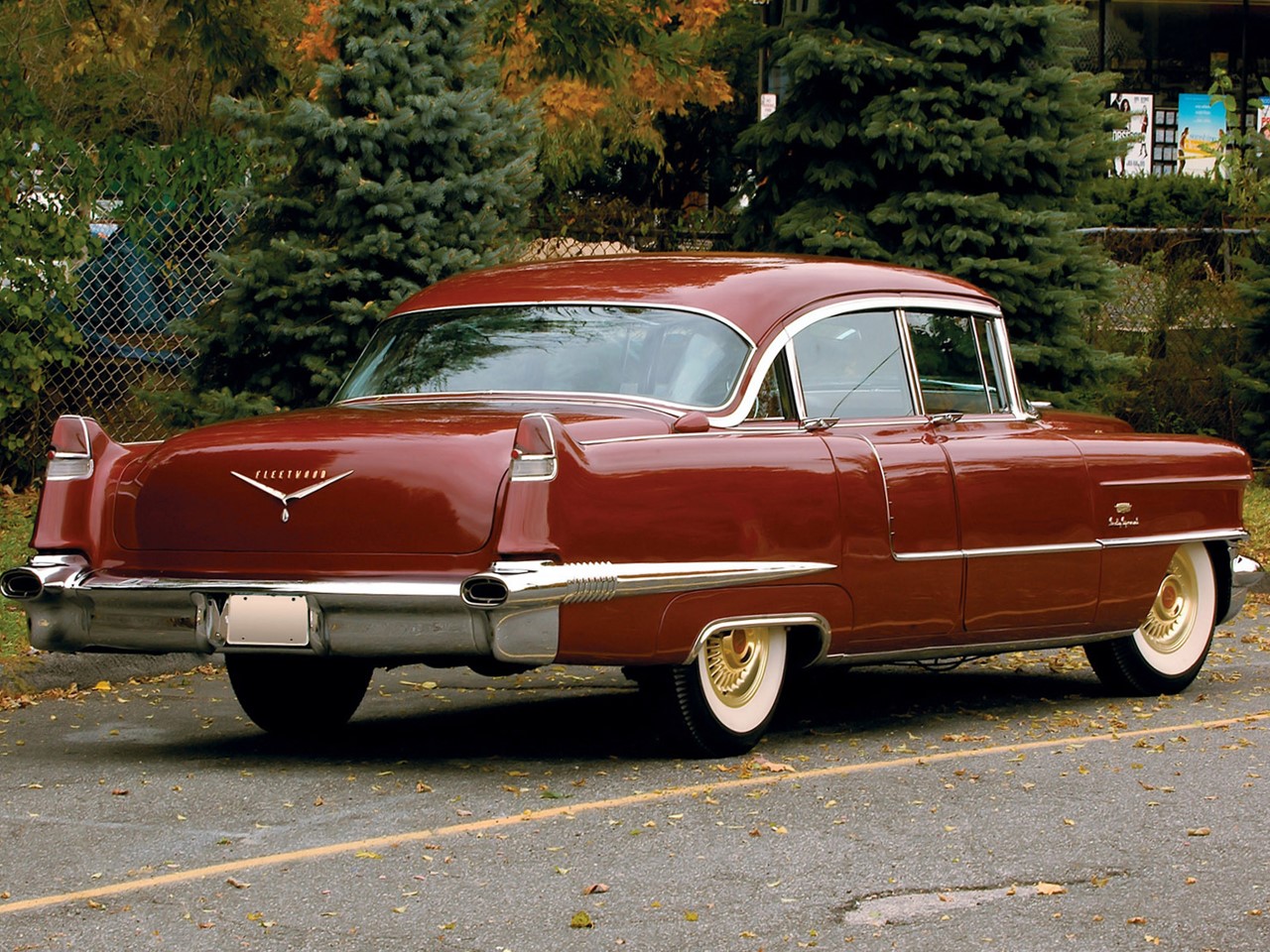 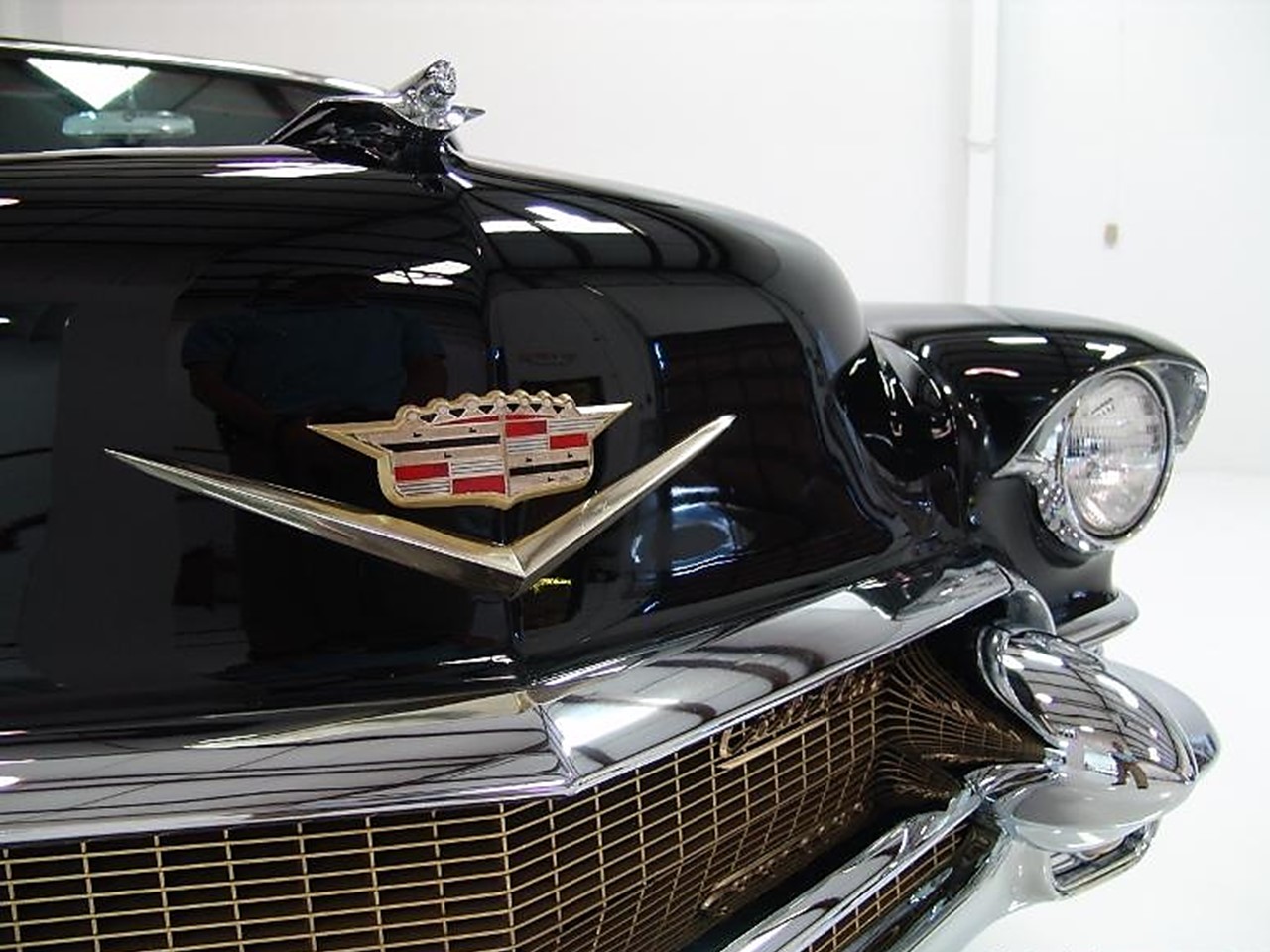 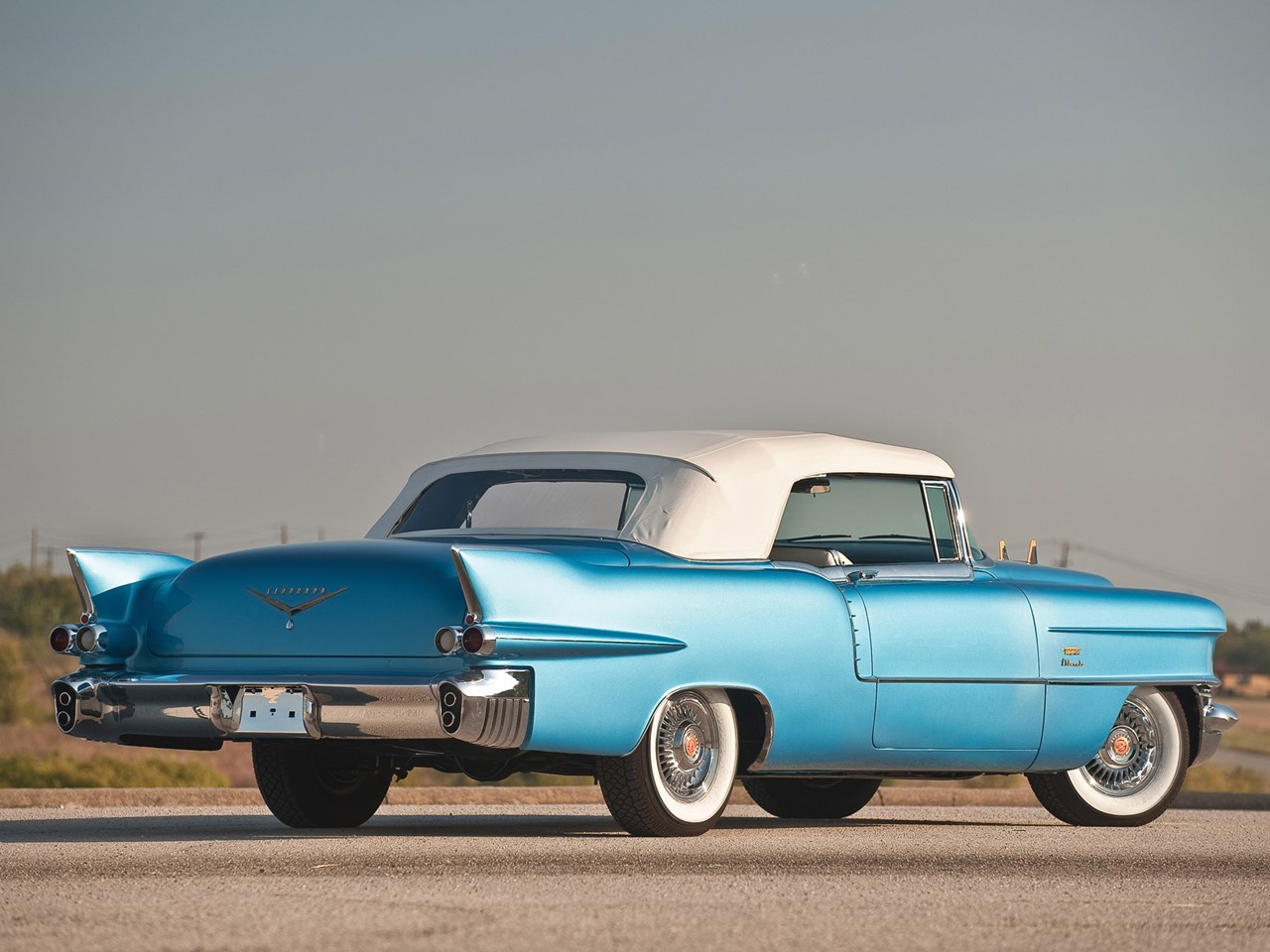 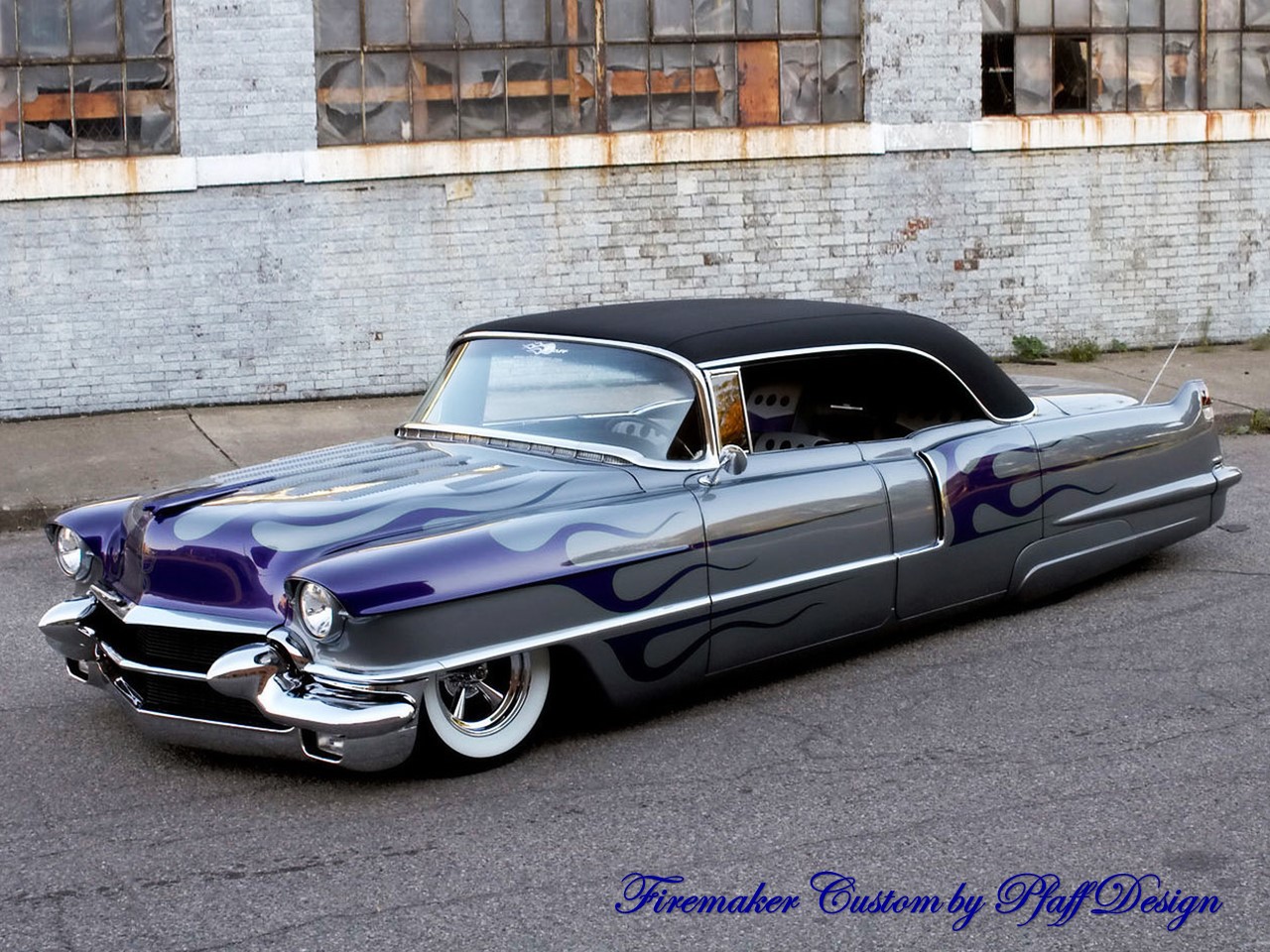 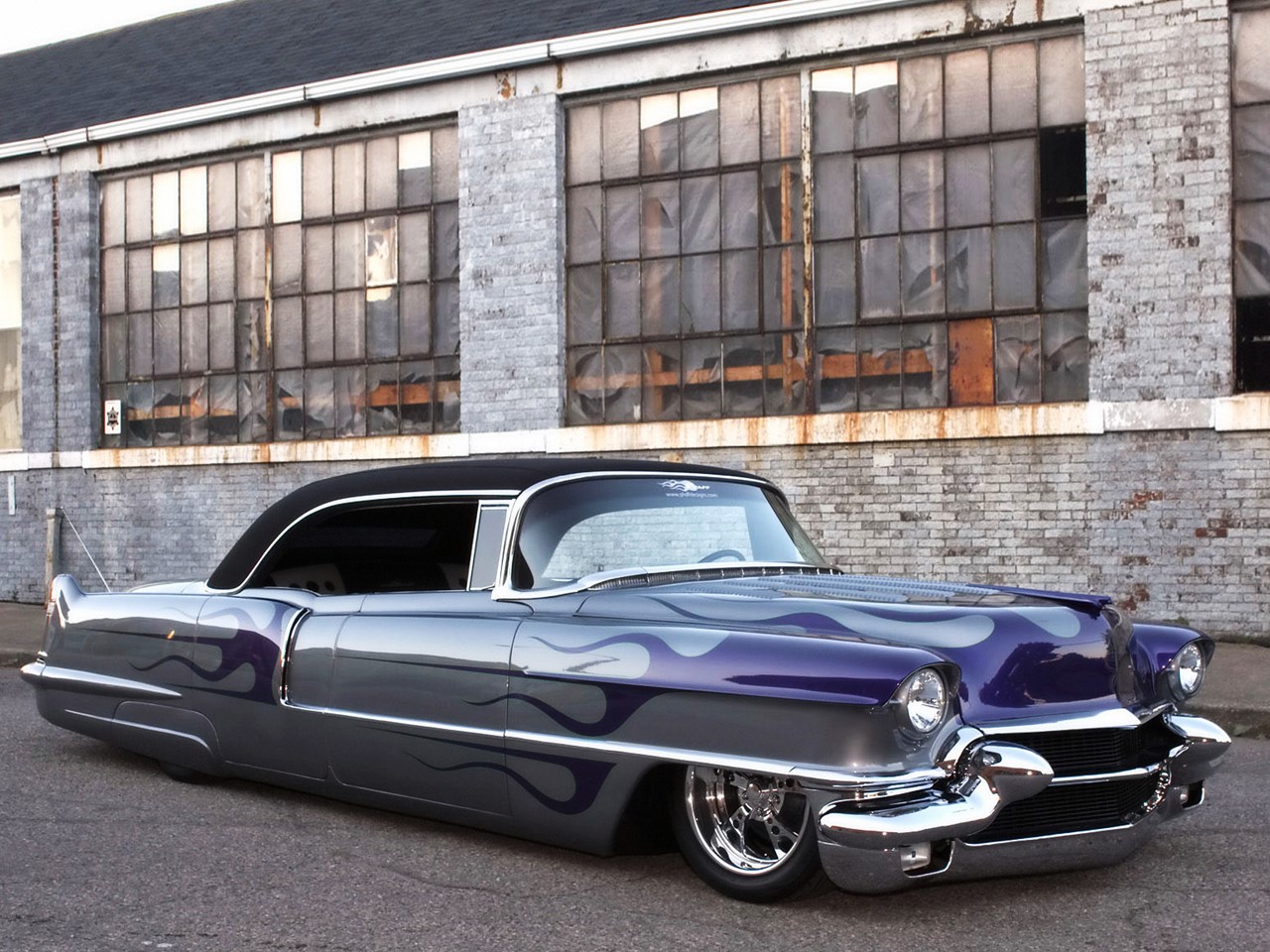 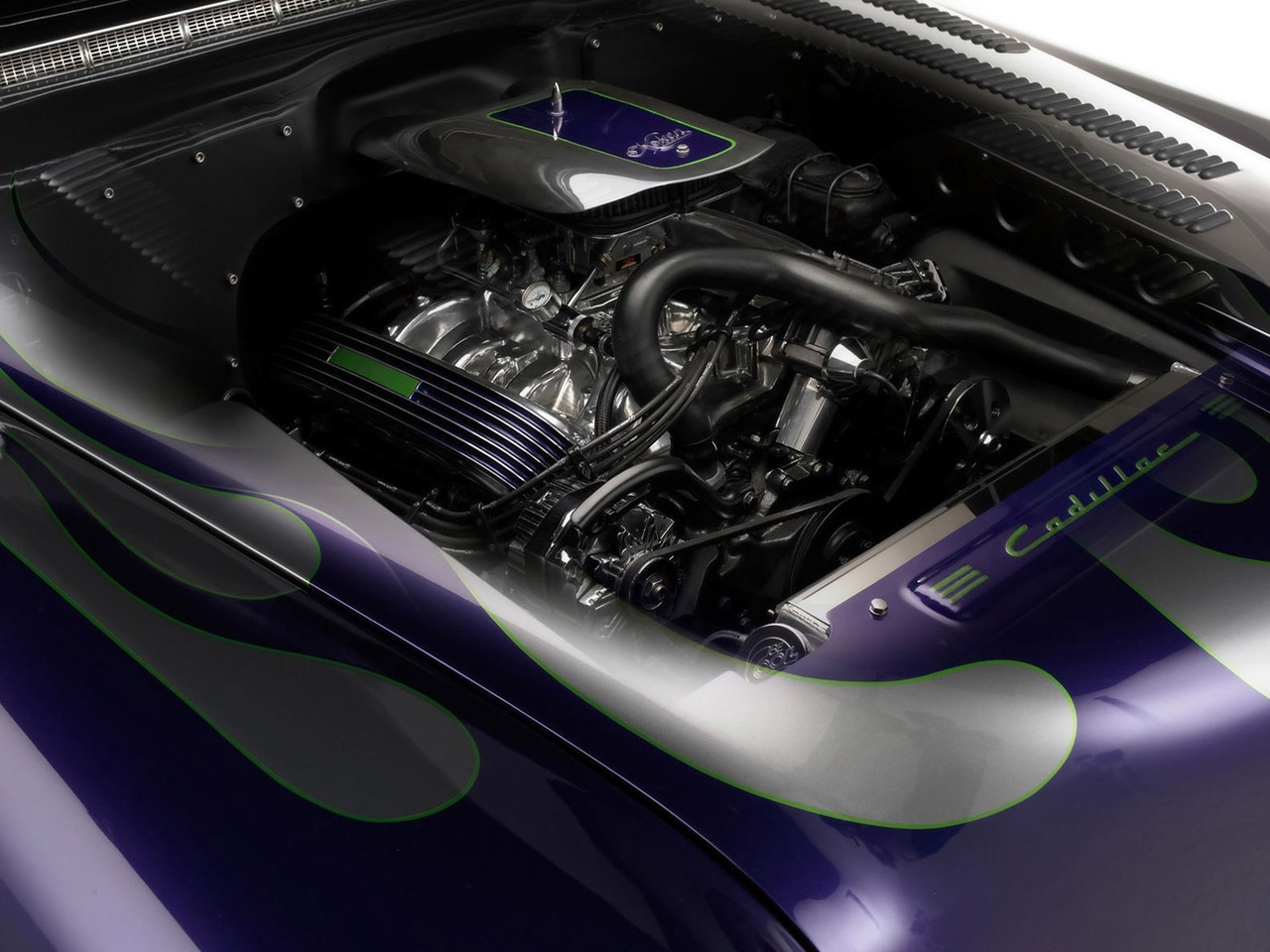 "As the Standard of the World Turns", Cadillac, Cadillac Historical, Classic American Marques

6 thoughts on “1956 Cadillac Series 62 Coupe deVille: A Classic Standard for the World” Leave a comment ›