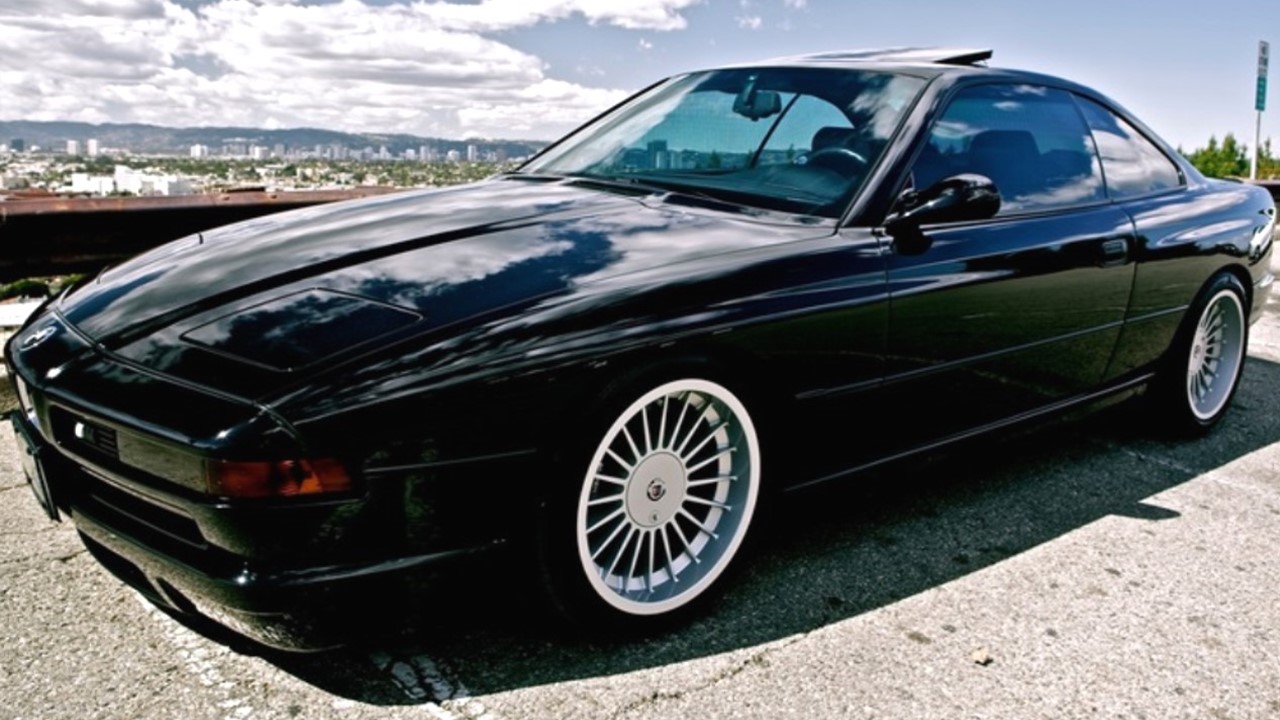 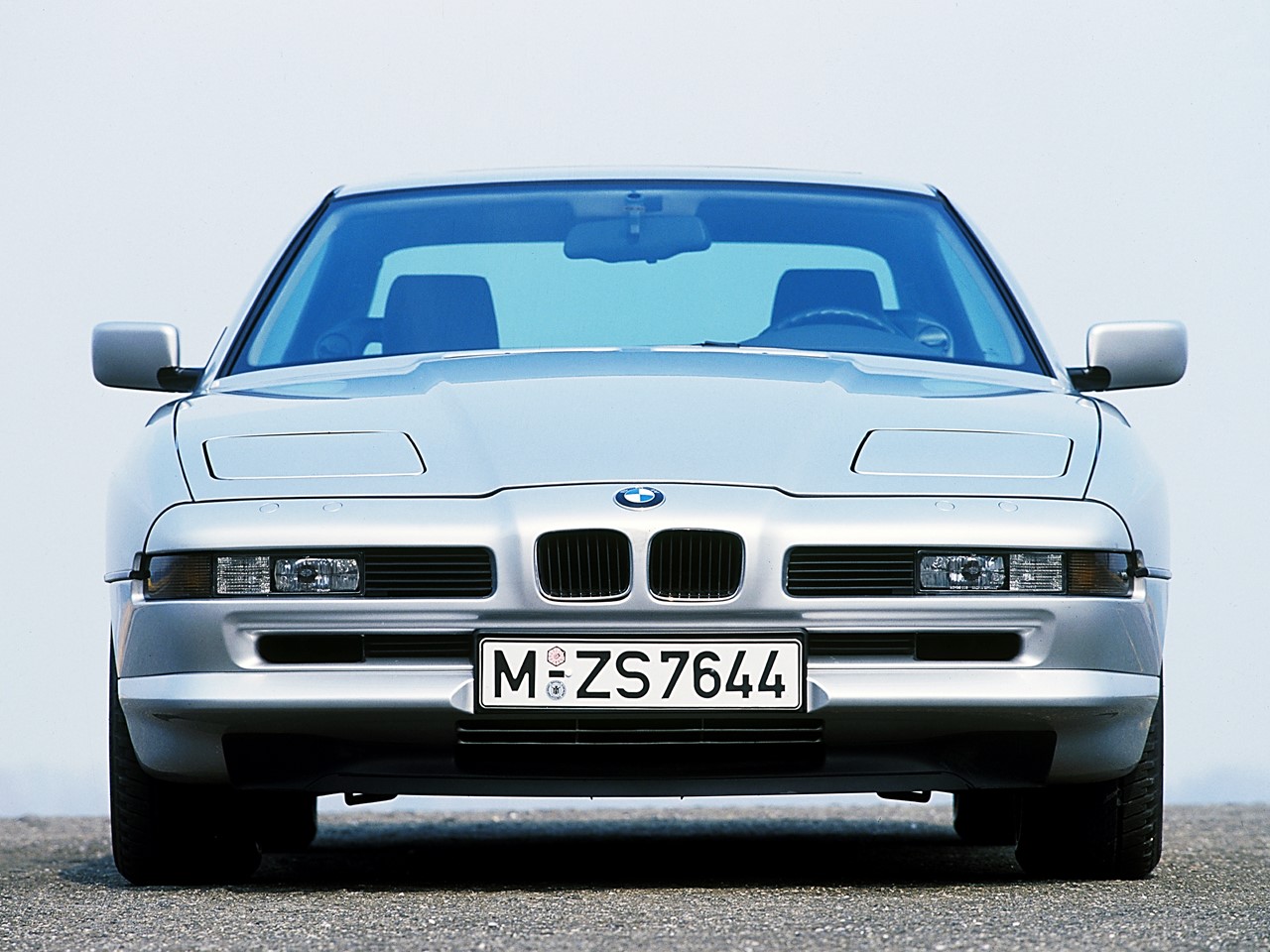 The exhilarating…exclusive…and elegant BMW 850 Ci was available by special order. It’s a consummate blend of luxury and spine tingling acceleration. The BMW 850 Ci is uniquely individual and uncompromising in every detail. The 8 Series introduced many “firsts” to the industry. It is the first car to feature CAN-bus multiplex wiring.  BMW’s Steptronic dual-mode manual transmission without a clutch provides refinement and hands-on control for those who take performance seriously.

The 850 Ci is one of the most sophisticated world-class luxury sport cars to wear the BMW signature twin kidney grille. BMW’s standards of excellence, athletic spirit and exceptional performance have earned world-wide acclaim from millions of dedicated fans – the 850 Series not only exemplifies the brand’s exponential technological prowess…it also has that rare ability to ignite the emotions on sight. 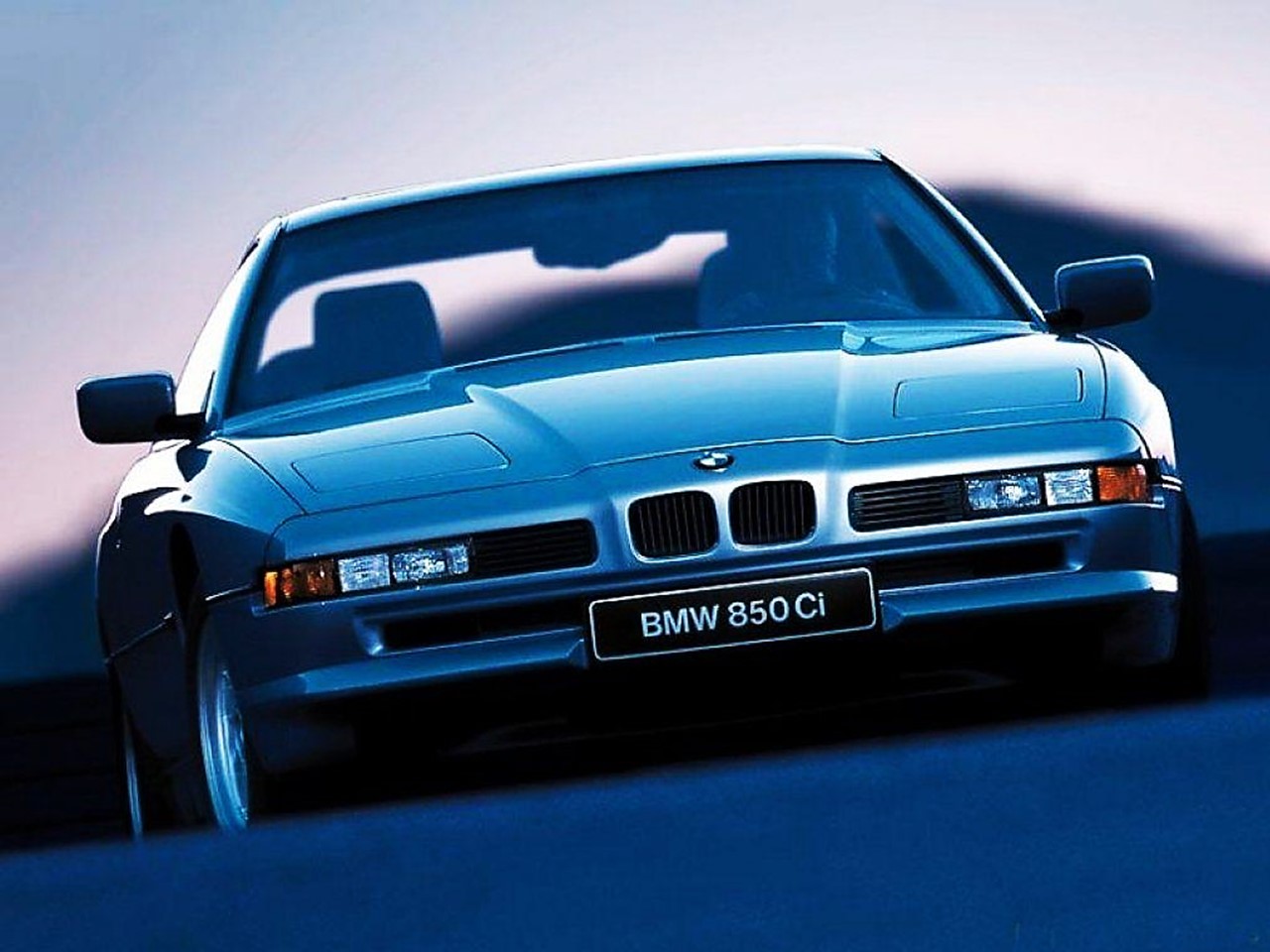 The 8 Series targets a different clientele. Its appearance is timeless…it looks as fresh today as it did when it was new. The milestone BMW 8 Series, with its avant-garde style and high-performance epitomized the brand with a unique eloquence. The pillarless unibody hardtop construction is aerodynamically sleek with a mere drag coefficient of 0.29…it slices through the atmosphere with grace. As with all BMW masterpieces – the 850 Series moves with tremendous verve and élan.

The BMW 850 Series bitch-slapped the competition before the coined phrase was introduced – This is the BMW that doesn’t follow status-quo. It is the Bimmer that blows the doors off the competitors…bolt by bolt. The BMW 850 Series is the quintessential bad boy’s car. In its V12 configuration – it’s ferocious by all standards with spirited performance.  It’s not for the faint at heart…the awesome, jaw-dropping performance calls for the open road and a nice leafy run. 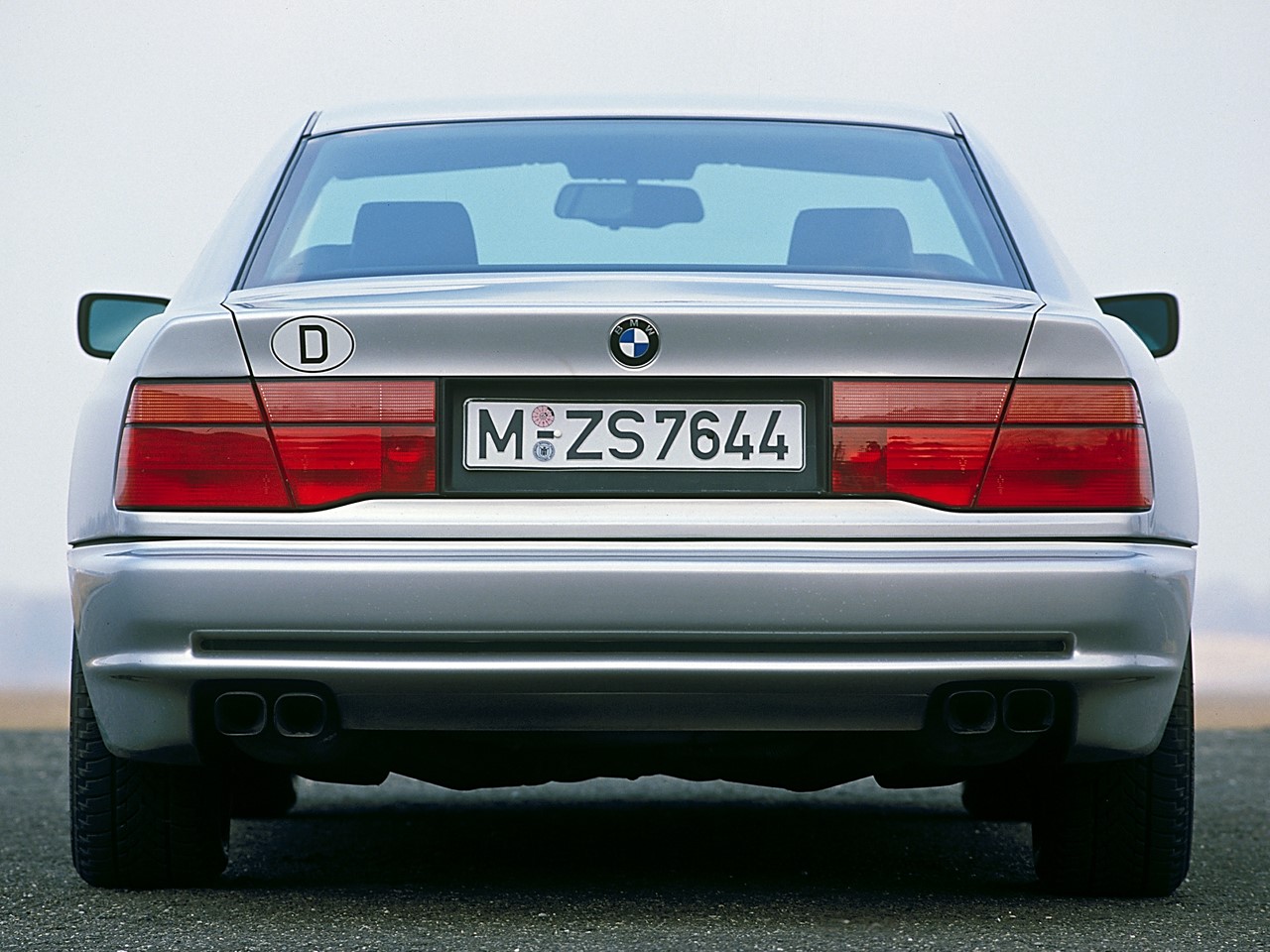 BMW’s Flagship luxury coupé showcases the brand’s superlatives. The 850 Series is the first BMW supercar to offer a V12 engine mated to a 6-speed manual gearbox on a road-going production model. It is also one of the first automobiles to use an electronic drive-by-wire throttle system. BMW used CAD tooling to design the unique bodyshell which was among the first in the industry at the time. The 850 Series is one of BMW’s first cars to use a multi-link rear axle. It is designed for the connoisseur that demands outstanding performance without sacrificing luxury. It was priced substantially higher in the $96,000 range (which equates to around $112,000 in today’s market). The 850 Series exhibits suave exclusivity as a grand tourer that doubles as a supercar – 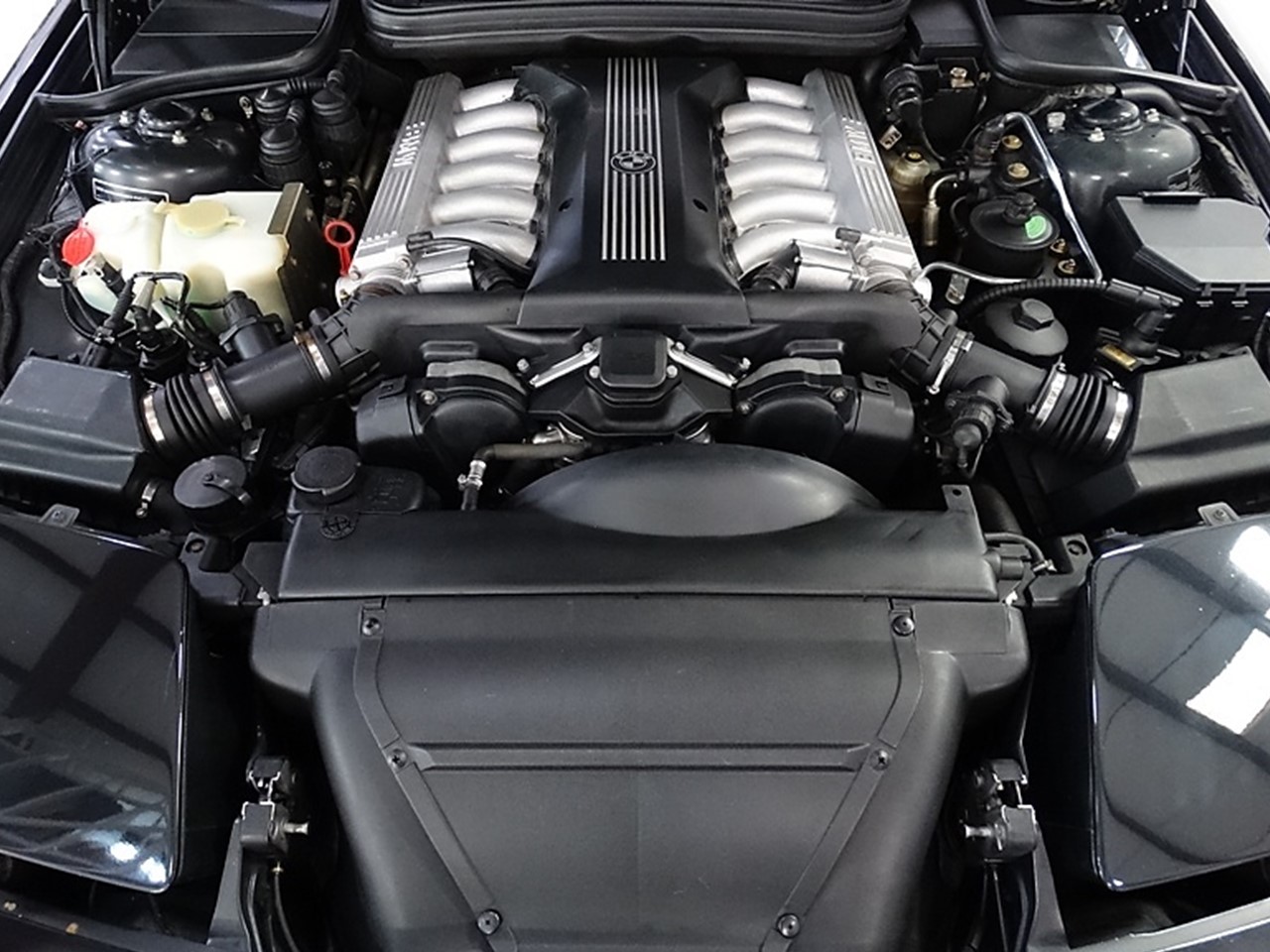 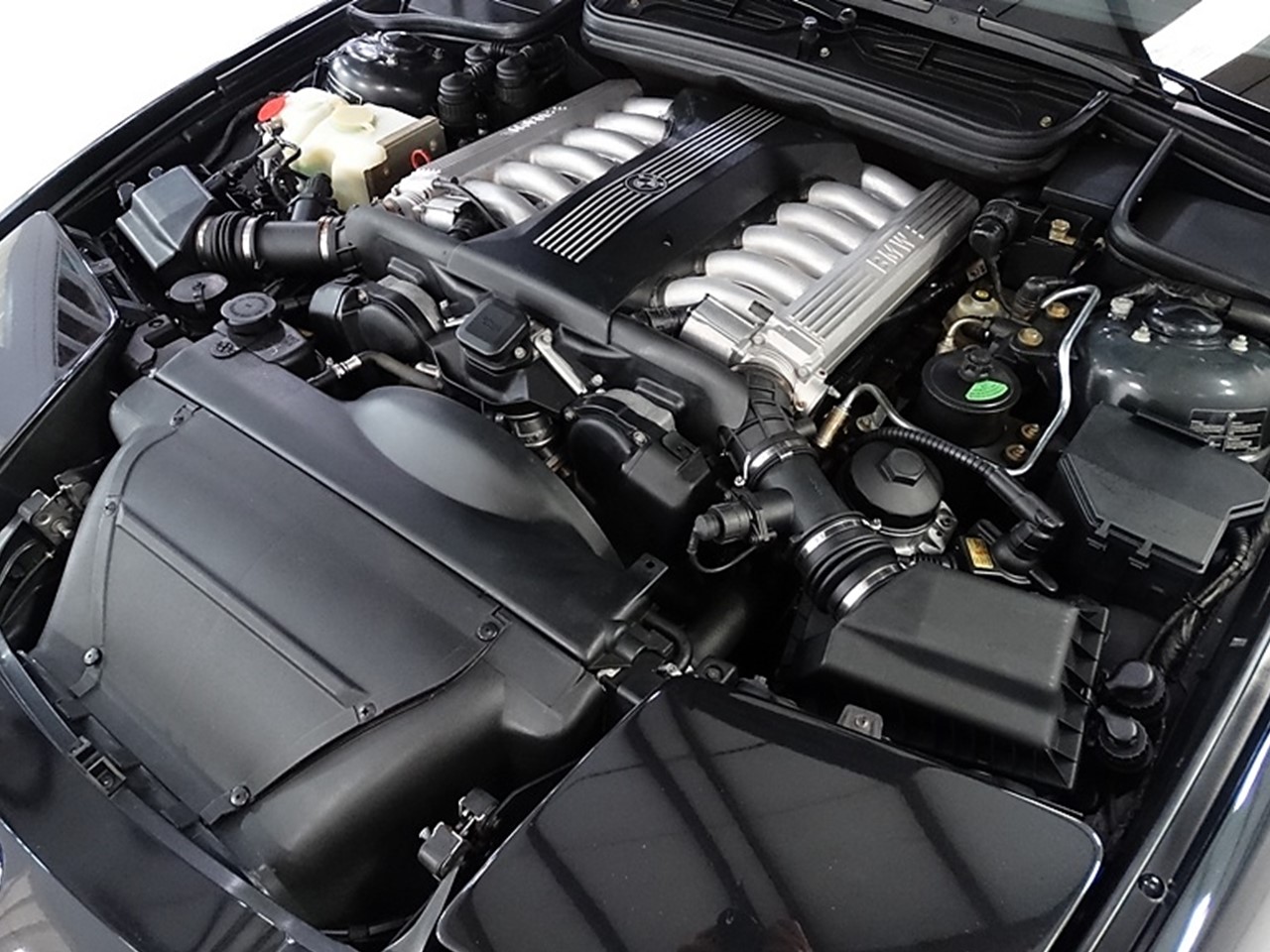 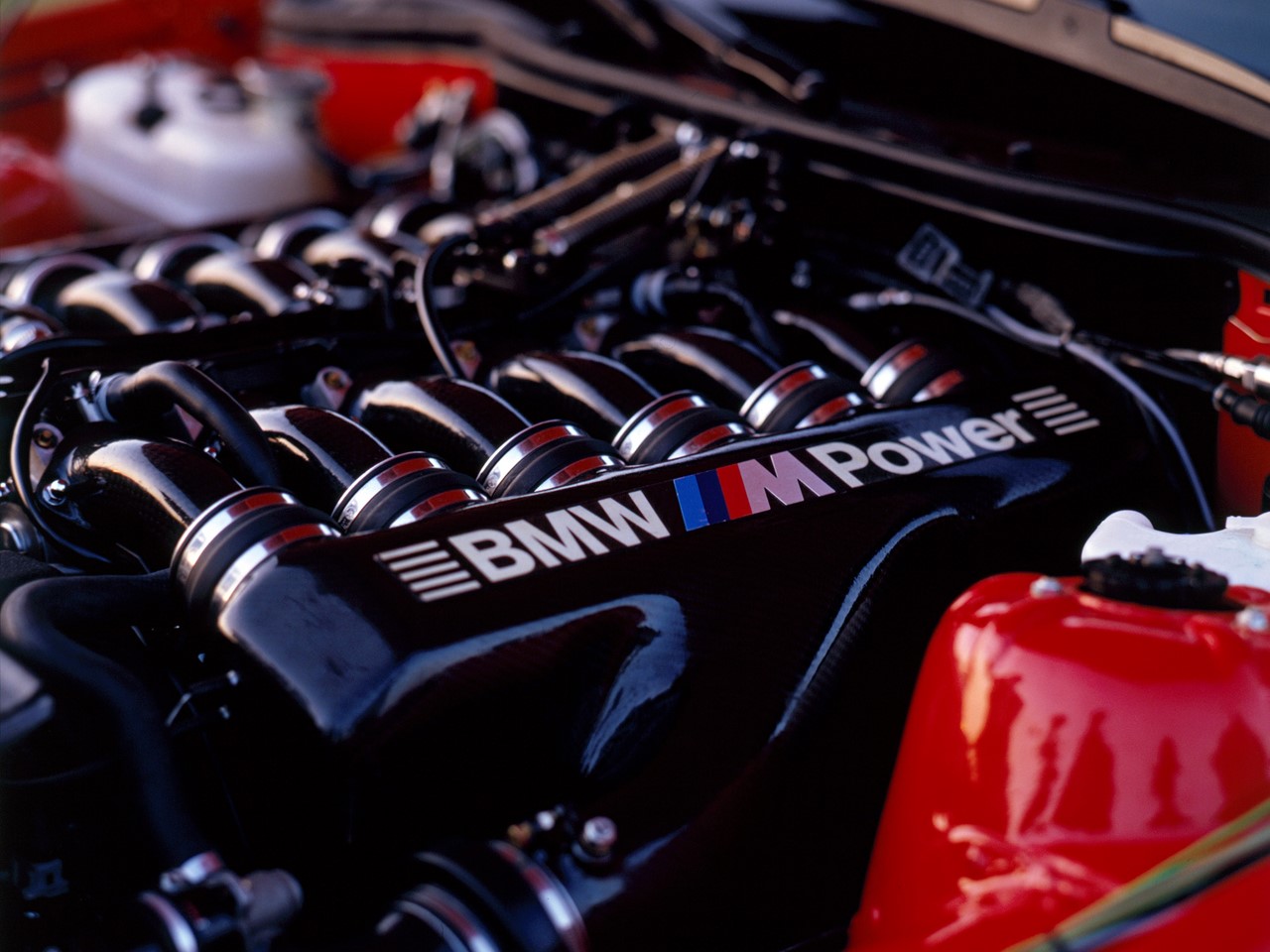 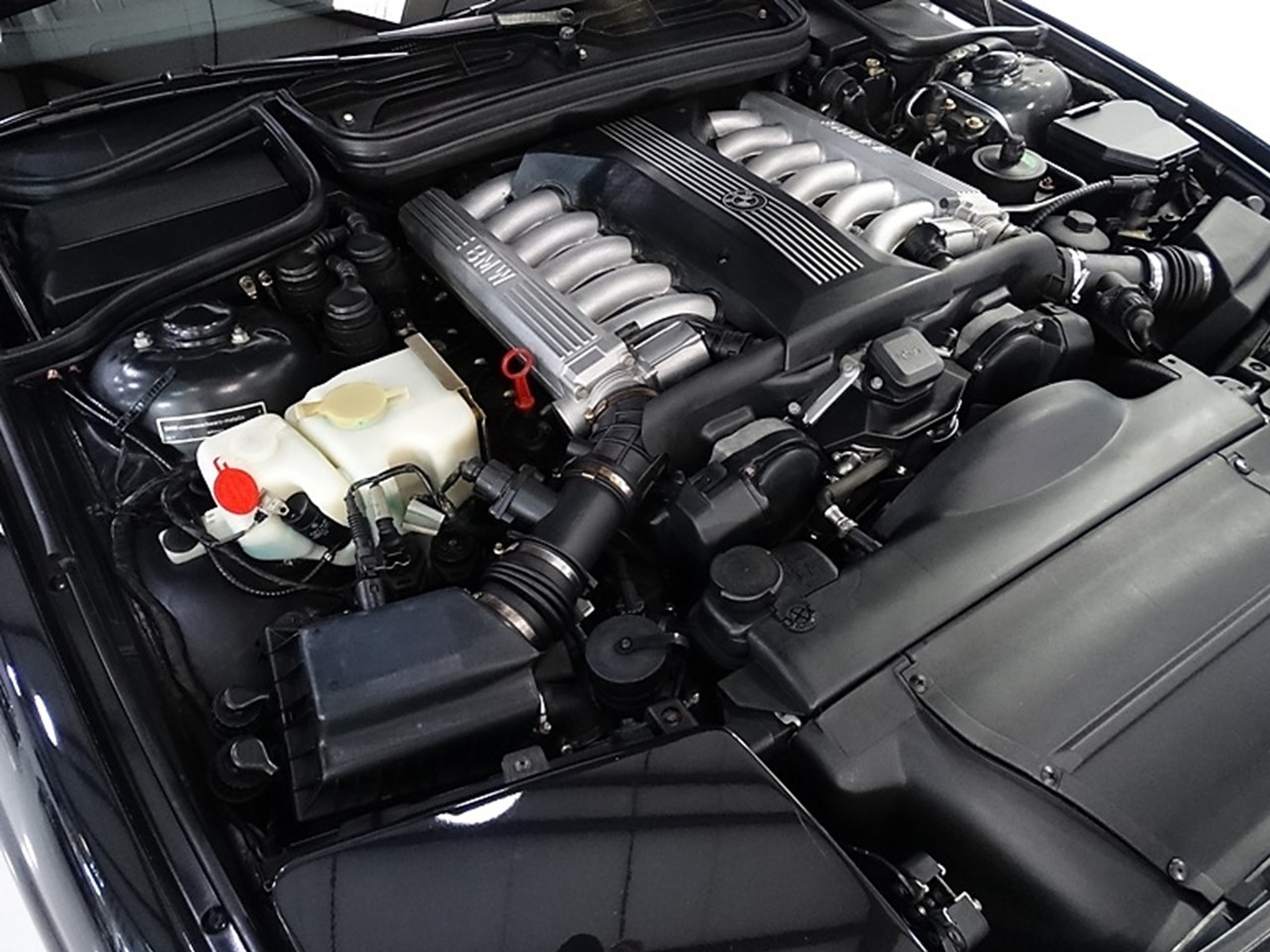 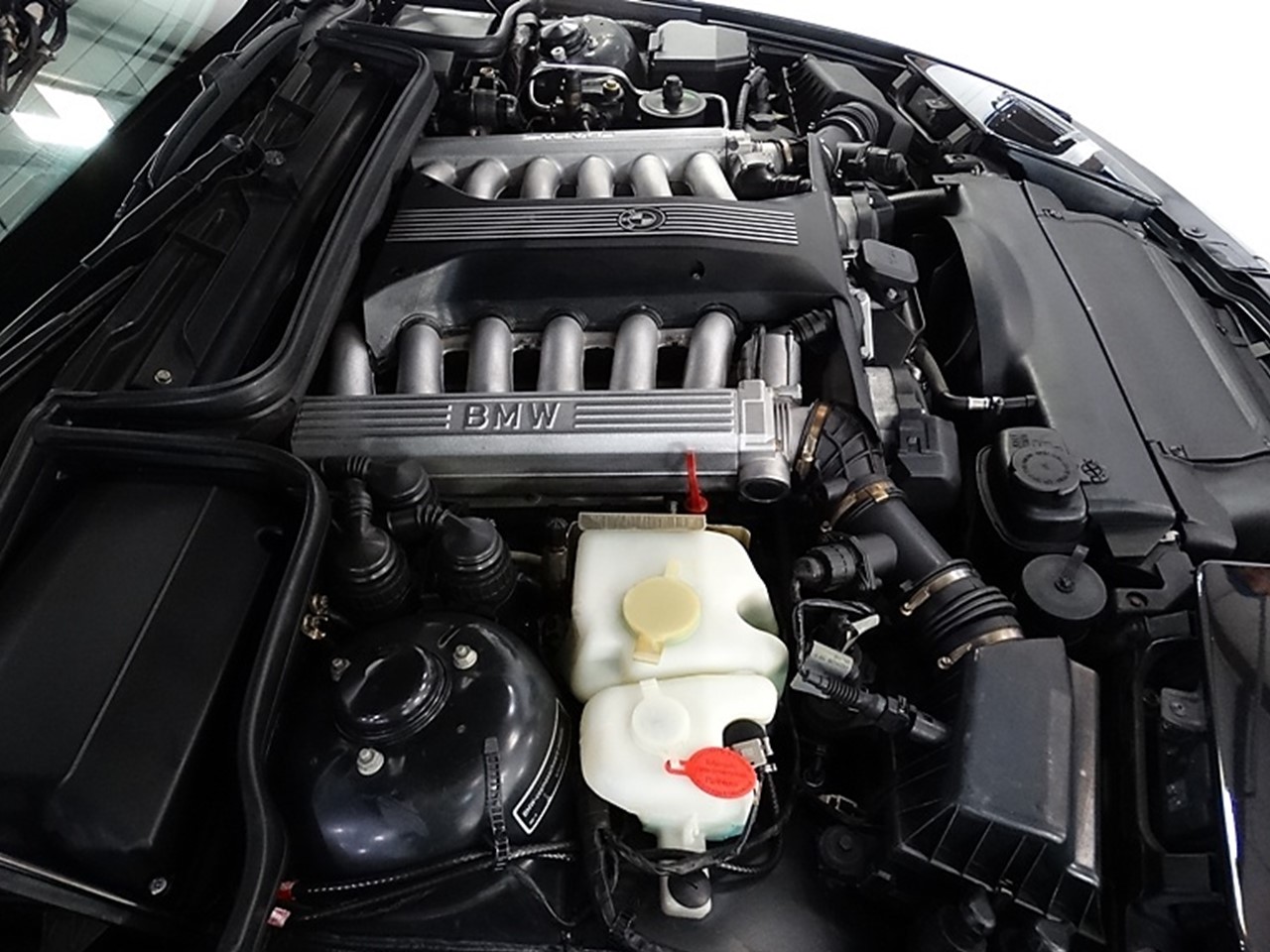 The 850 Ci is one of the most seductive body styles ever built. It blends grace of form and refinement of luxury with the astonishing thrust of BMW’s V12 engine. The 850 Series was so carefully conceived and executed; it represents a benchmark of modern grand tourers. Its clean front end ensemble is augmented by hidden headlamps. The rear end design has a short overhang aiding its aerodynamic efficiency. The bumpers of the 850 CSi has a rounded, more aerodynamic design for both front and rear. The stainless-steel dual exhaust ports for the 850 Ci are square while the 850 CSi uses a round design.

Its overall silhouette is sleek and rakish. The swept roofline with the absence of “B” pillars adds a sporty look to its luxurious flair. All windows can be retracted into the body. This is an aerodynamic wedge of power. The BMW 850 Ci rides upon a tight 105.7” wheelbase, is 73” in width, and 188.2” in length. This was BMW’s highest performance driving experience in a refined road-going model for the day. 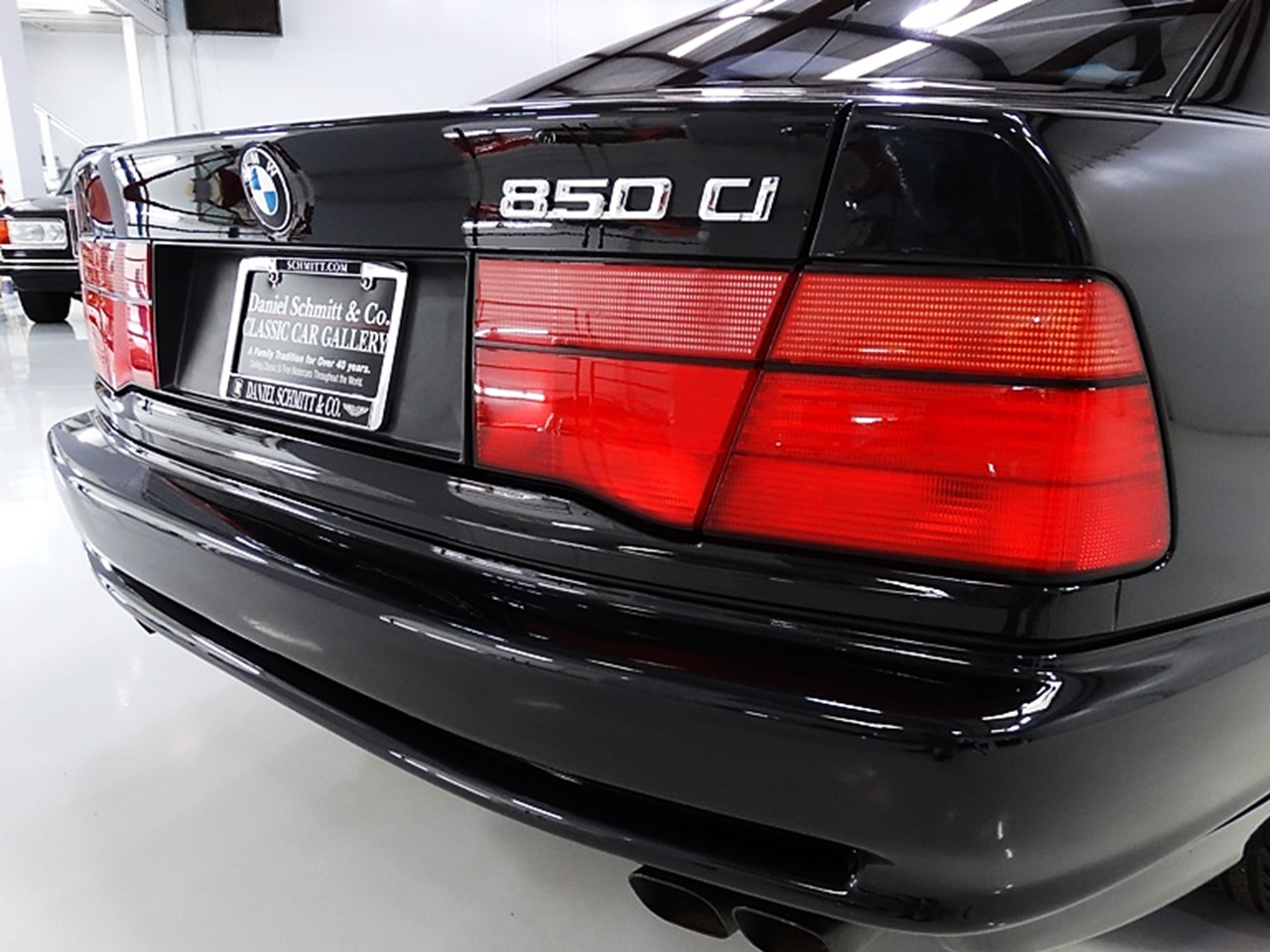 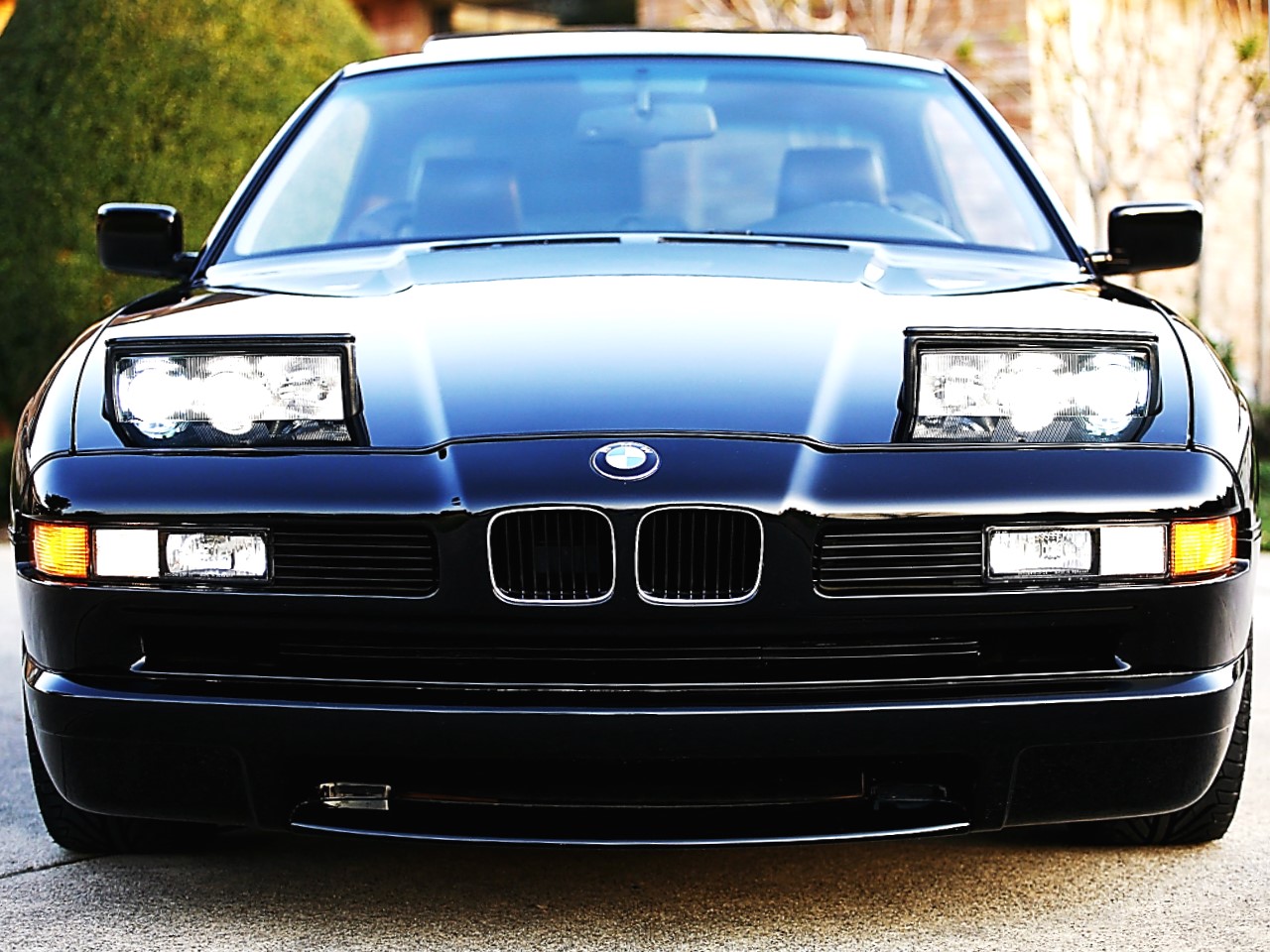 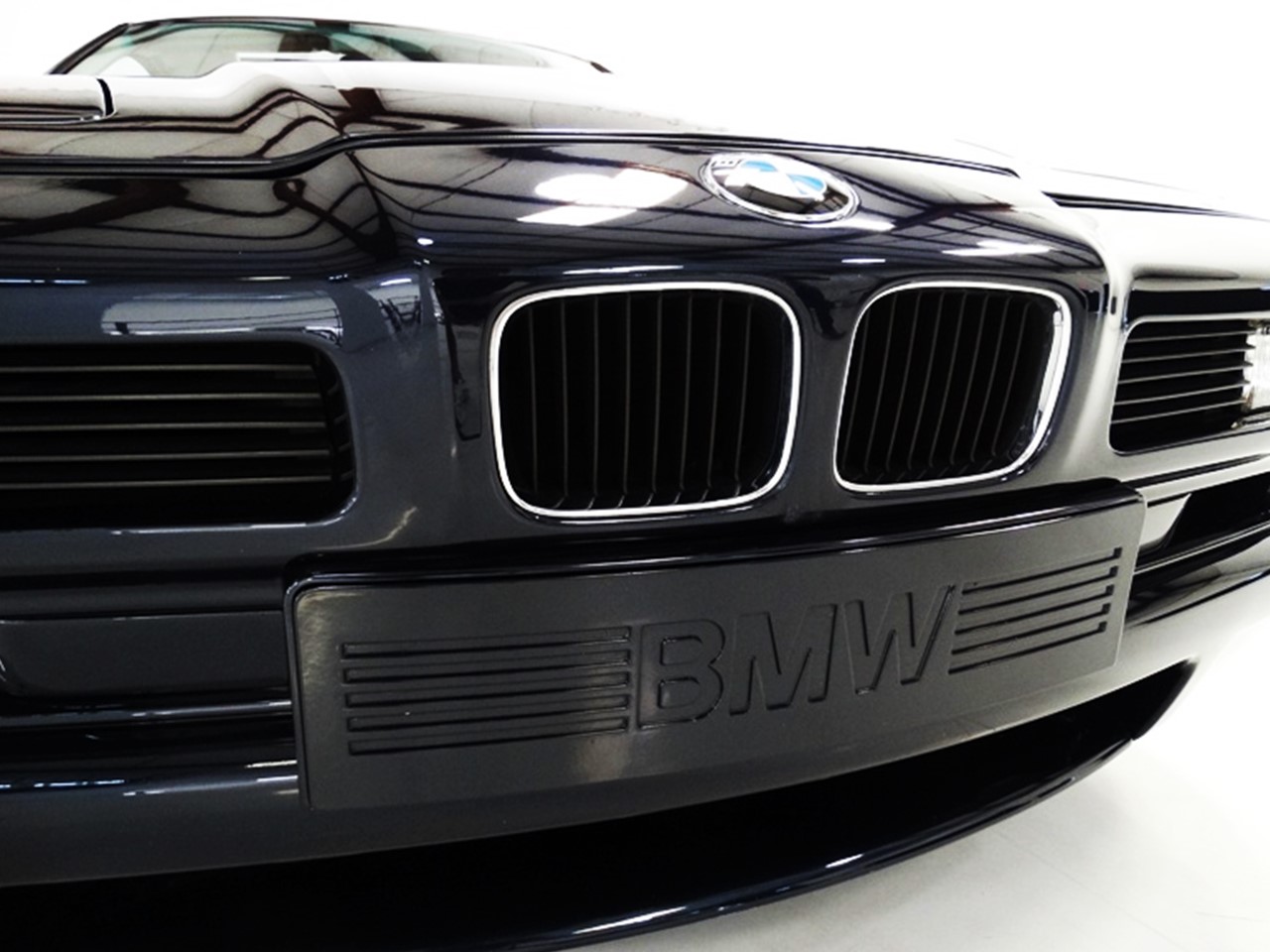 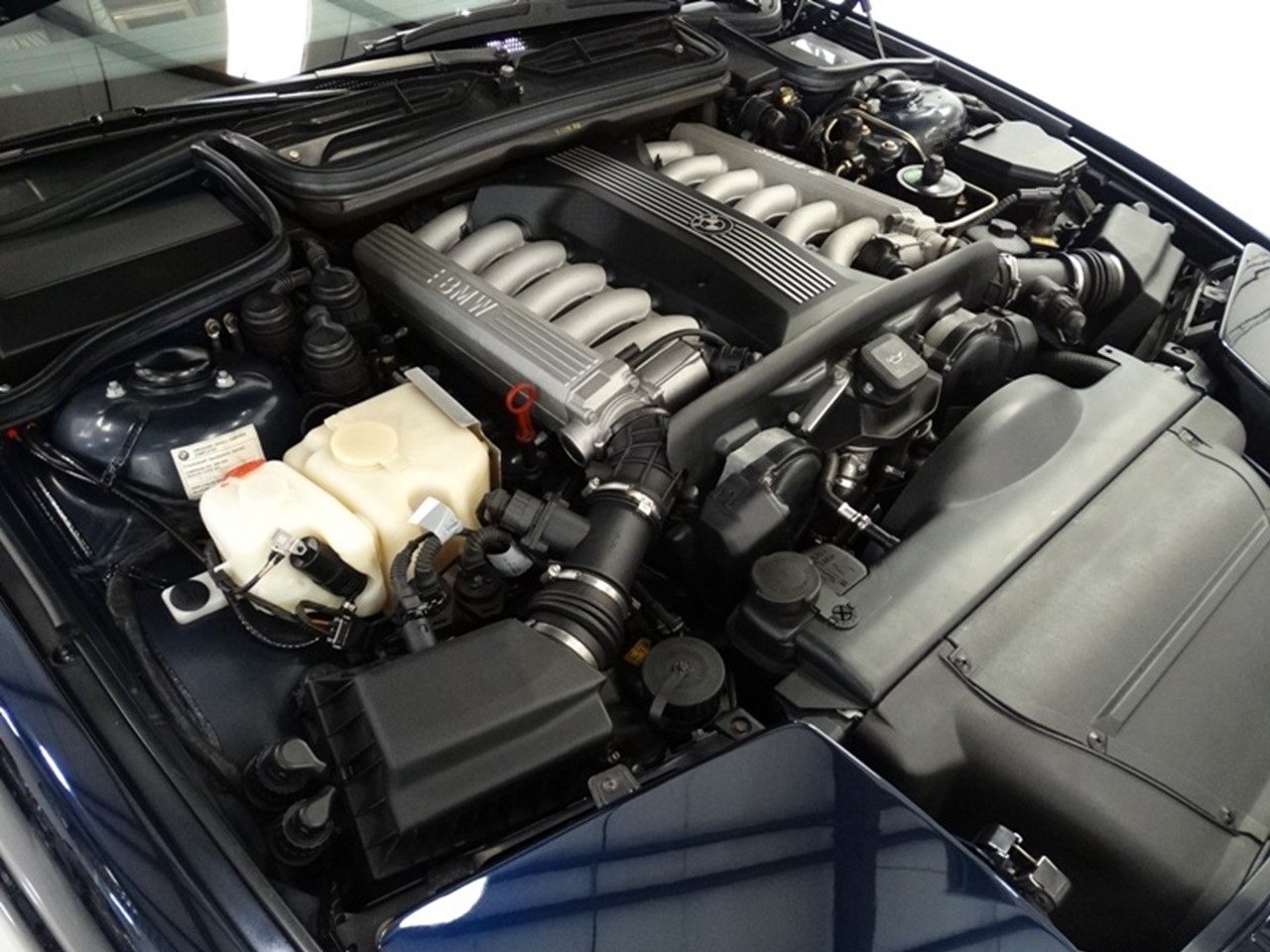 If you are like me…and you require more than 6-cylinders, this is the car for you! It moves with aplomb – this is the “serious” BMW. The 850 Series “IS” BMW. They know racing…racing engines have muscle, but what’s the use if there is brawn…but no brains? BMW pioneered automobile electronics.

BMW chose to give its racing engines intelligent technology that makes standard production engines so unique. Digital Motor Electronics (DME) makes the difference. The success is evident; the formidable Formula 1 engine became the first computer-controlled turbocharged engine to win a World Championship title in 1983…the success is due in no small part to the finesse of BMW electronics. The brand uses power and performance reserves previously regarded as unattainable – BMW turns minimal energy into maximum performance…

Motorsport represents an integral component of BMW’s character. BMW’s motorsport experience helps to build better automobiles. The brand promotes a constant exchange of experience between racing specialists and production engineers. This generates a continuous flow of information.  It is a known fact that BMW production models and racing models share many features in common. Performance has always been part of BMW’s philosophy…just ask the competition – 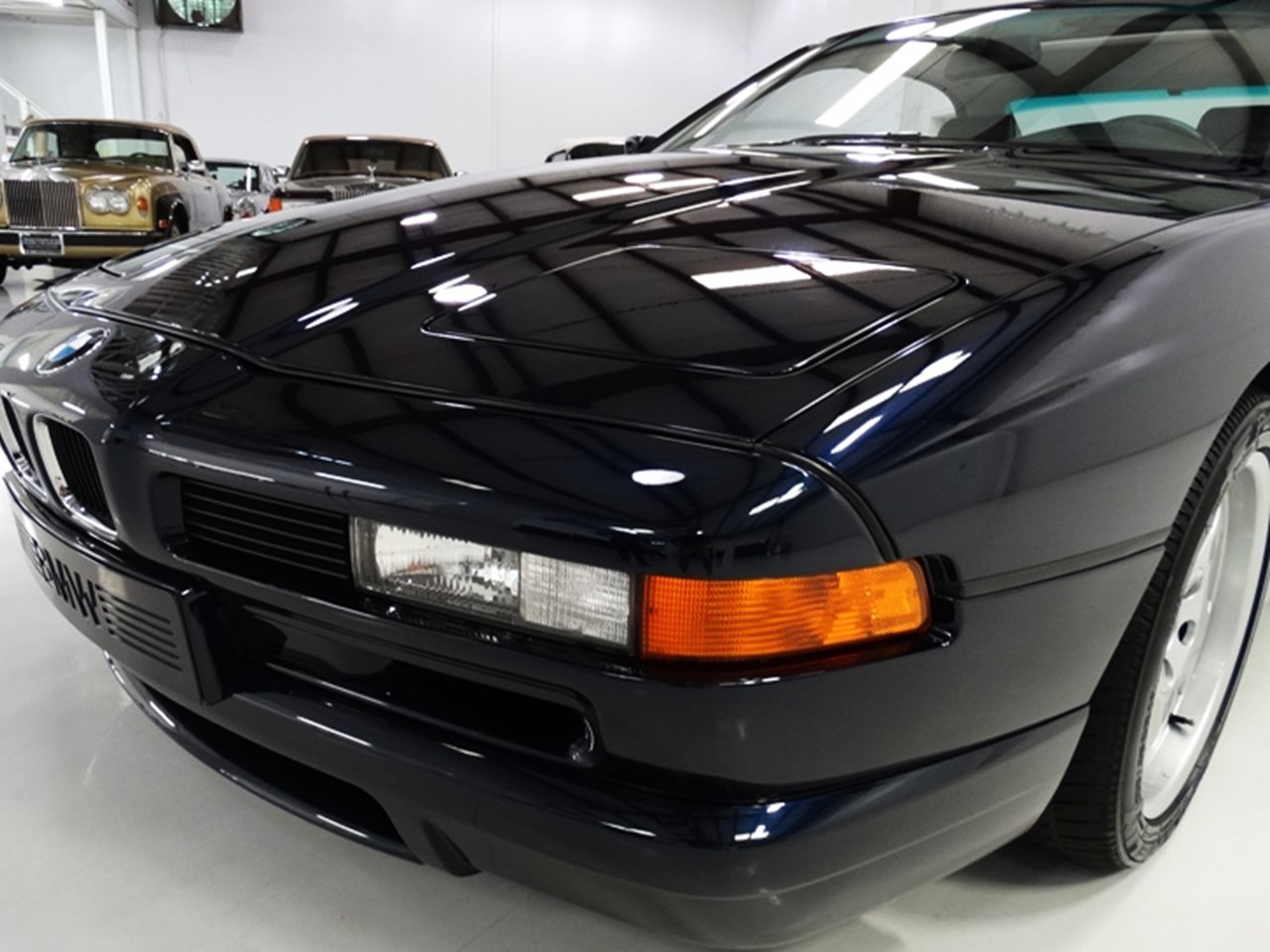 BMW has accumulated an extraordinary level of engineering knowledge throughout the decades through evolutionary processes. BMW engines are endowed with an exceptional sense of power on demand with perfectly balanced crankshaft and piston assemblies. The 850 Ci has perfect engine response to the accelerator at all speeds, and gear changes are extremely imperceptible in its overall operation.

There are a total of 30,621 examples built up to 1999. BMW pulled the 8 Series from North American markets because there were only 7,232 sold over a 7 year timespan. More than two-thirds of all the BMW 8 Series are produced with V12 engines, and only one in six models fitted with the 6-speed manual gearbox. The 850 CSi accounted for 1,510 of the examples produced. This ultra-high performance model was available exclusively with a manual gearbox maintaining a sporting nature. 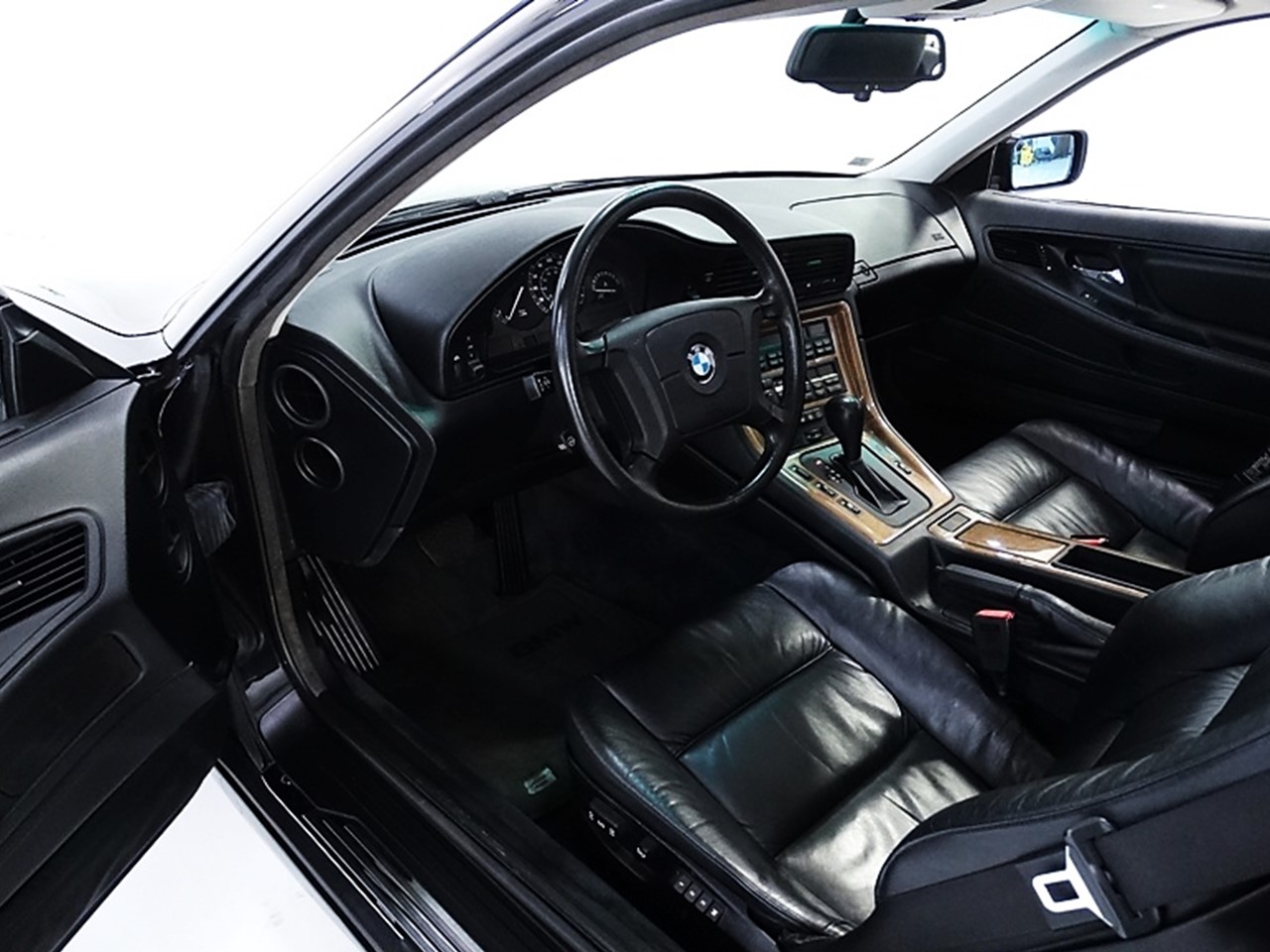 What’s most impressive about the 850 Series is the fact BMW integrates all cabin controls and instrumentation into ergonomic principles. Everything is aligned for optimum results. The driver’s line of vision, seating configuration, steering wheel angle, the shape and position of the gear shift lever, and dash instrumentation are all placed exactly where they should be to integrate man/woman and machine. The 850 Series has excellent all around visibility. Everything is designed to assist the driver. 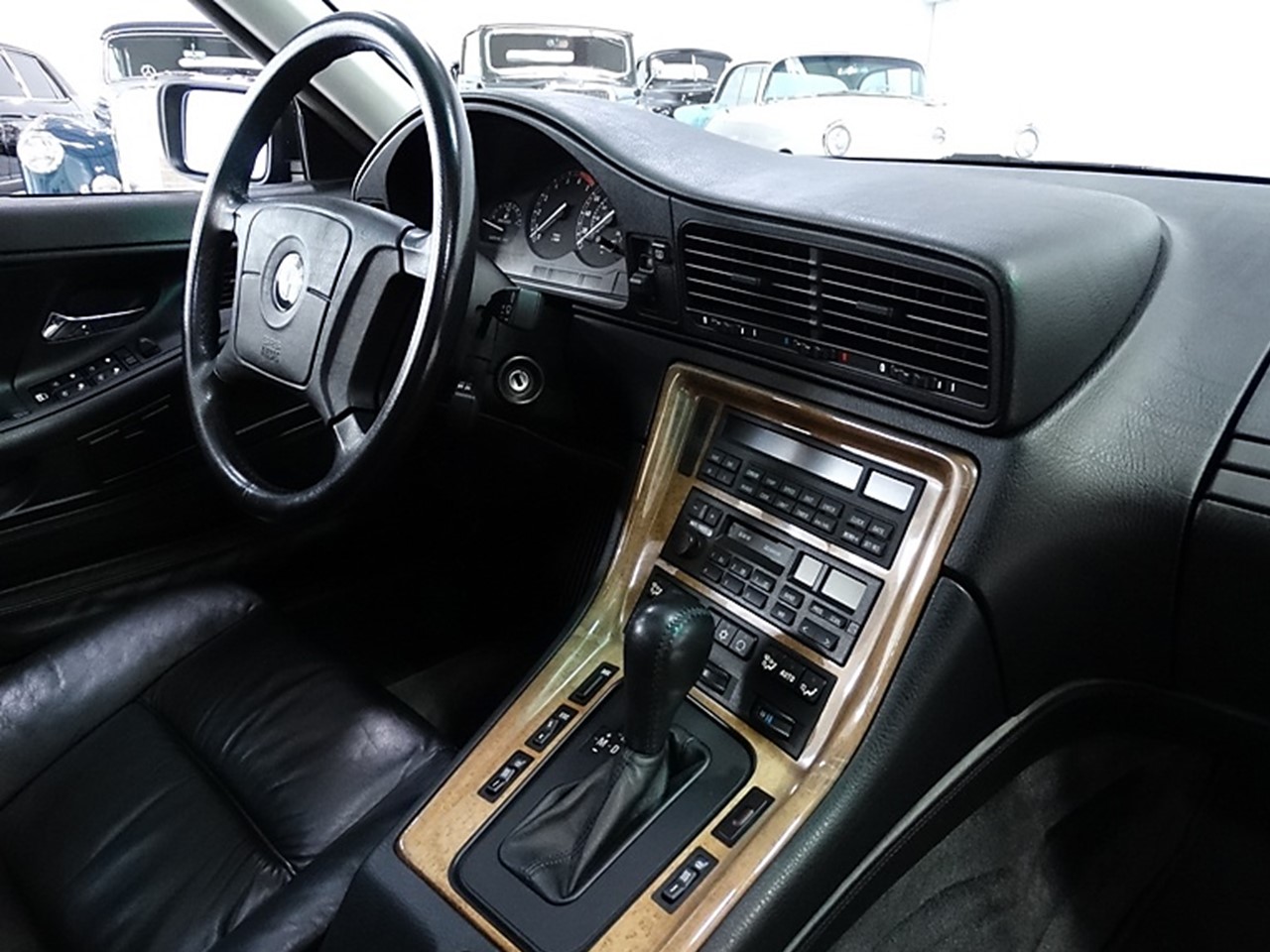 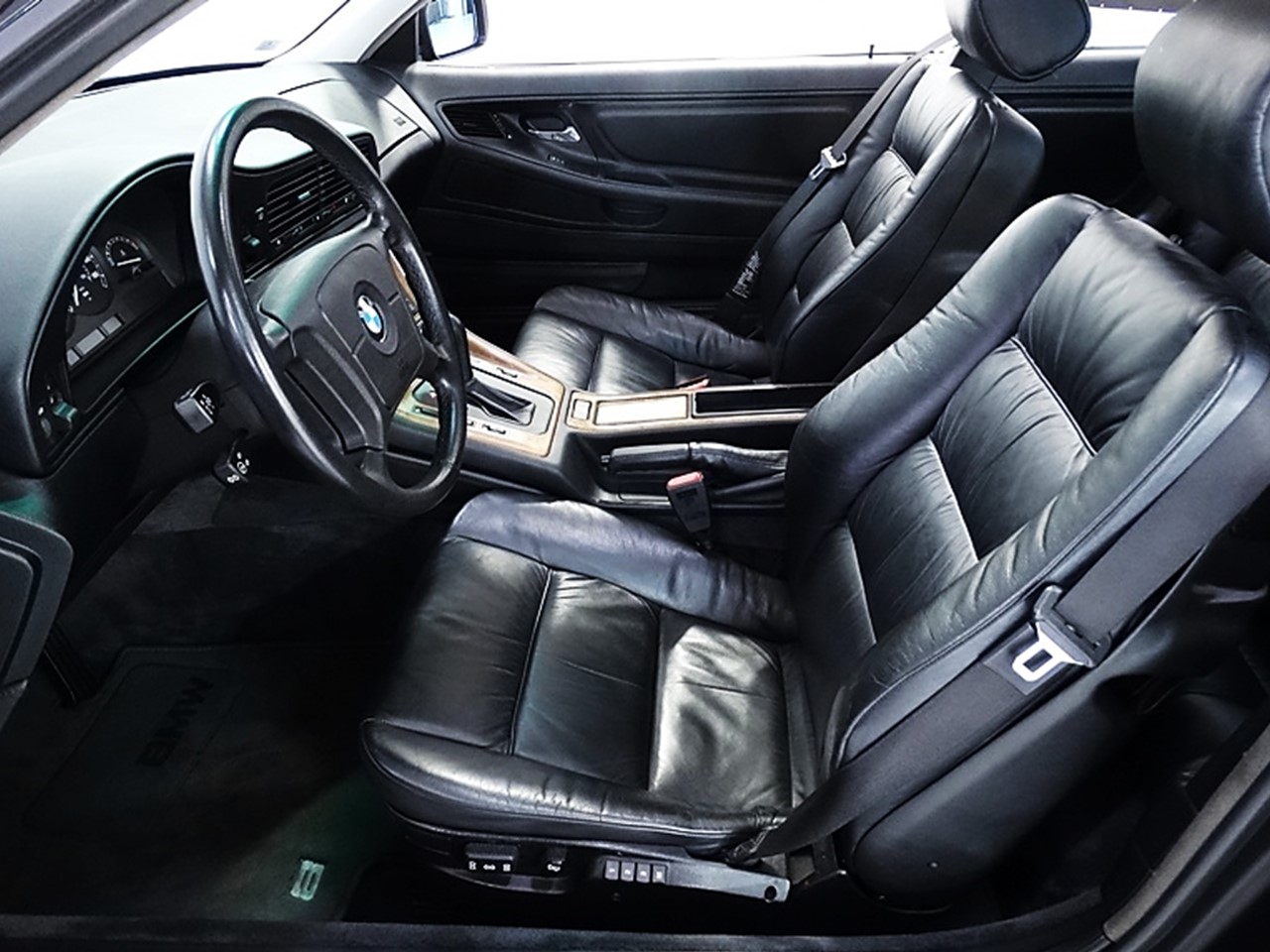 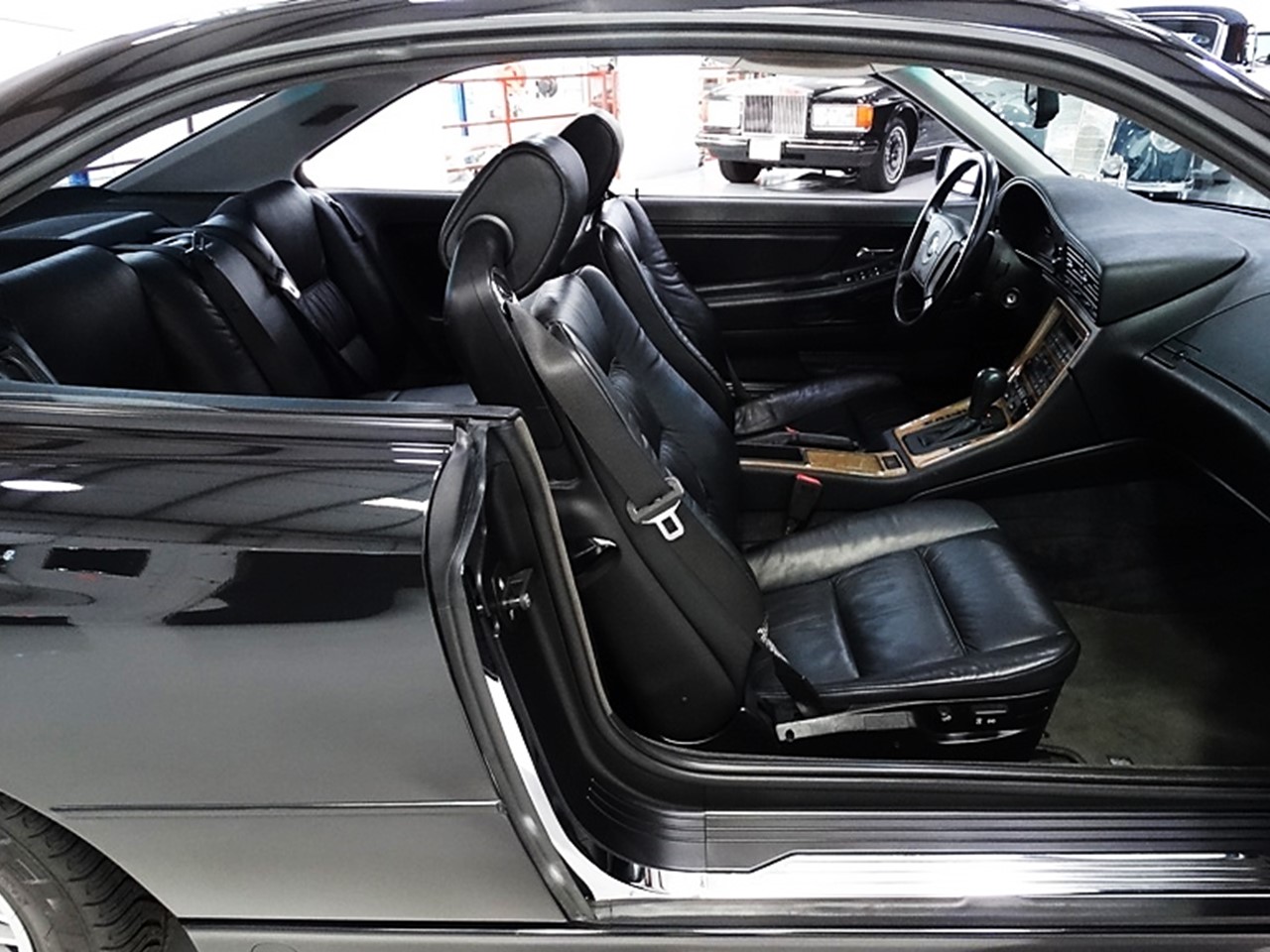 the absence of the center “B” pillar makes a dramatic statement

The BMW 850 Ci also takes care of itself. Every BMW has added theft protection; each key is embedded with a computer chip and cannot be easily duplicated. Should a key be used and not recognized…the 850 Ci will not cooperate thanks to the coded Driveaway Protection system. Its theft deterrent system is also on guard protecting your investment.

The CAN-bus multiplex electrical system was featured for the first time with data transfer from several different systems via the same conduit enhancing reliability and reducing weight. This list goes on and on…this is BMW in its most luxurious level. It accomplishes this high level of comfort while delivering exceptional stability and agility along with serious power and performance that is expected with a car of this stature. The 850 Series delivers a celebration of all that makes driving desirable – it presents luxury as a way of life and performance as a way of living…

Automatic Stability Control plus Traction (ASC+T), Speed-Sensitive Power Assisted Steering, Electronic Damper Control (EDC), and ABS are among the amenities that give the 850 Series a distinctive identity as the ultimate driving machine. The 850 CSi Series, introduced in 1993, had new driving dynamics which include active rear axle kinematics. The rear wheels turn in the same direction as the front wheels optimizing directional stability.

The 850 CSi is the top of the line in the 850 Series and one of the most collectible models. It was built from 1994 to late 1996. Production ended because the S70 engine could not be modified to comply with new emission regulations without substantial re-engineering. The CSi’s unique electrohydraulic system is the precursor to modern-day Integral Active Steering available in 5, 6, and 7 Series BMW’s. The 850 CSi is equipped with a 5.6 litre V12. It produces 382 hp with 550 Nm of peak torque available. The 850 CSi can sprint from 0-60 mph in less than six seconds. 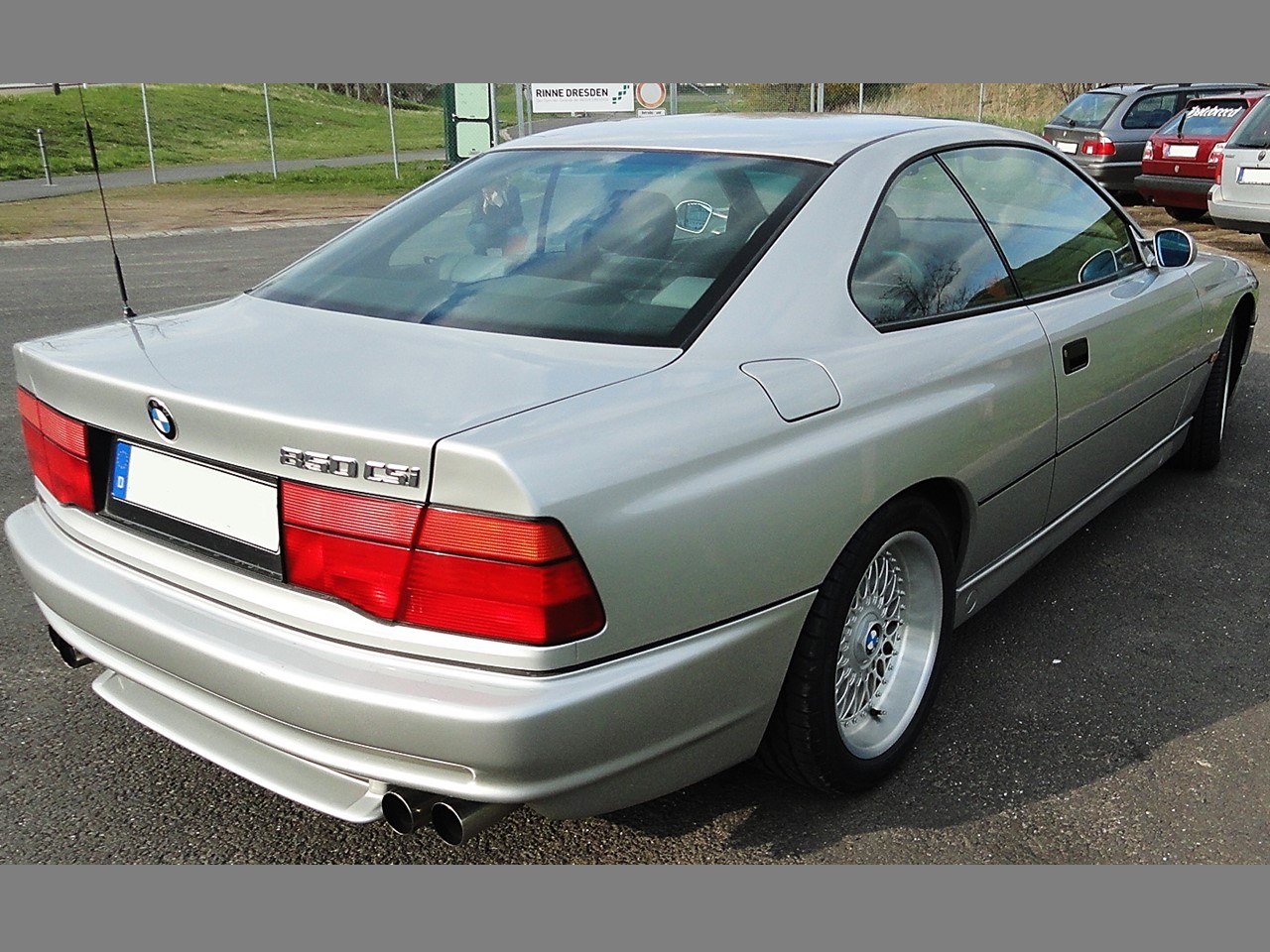 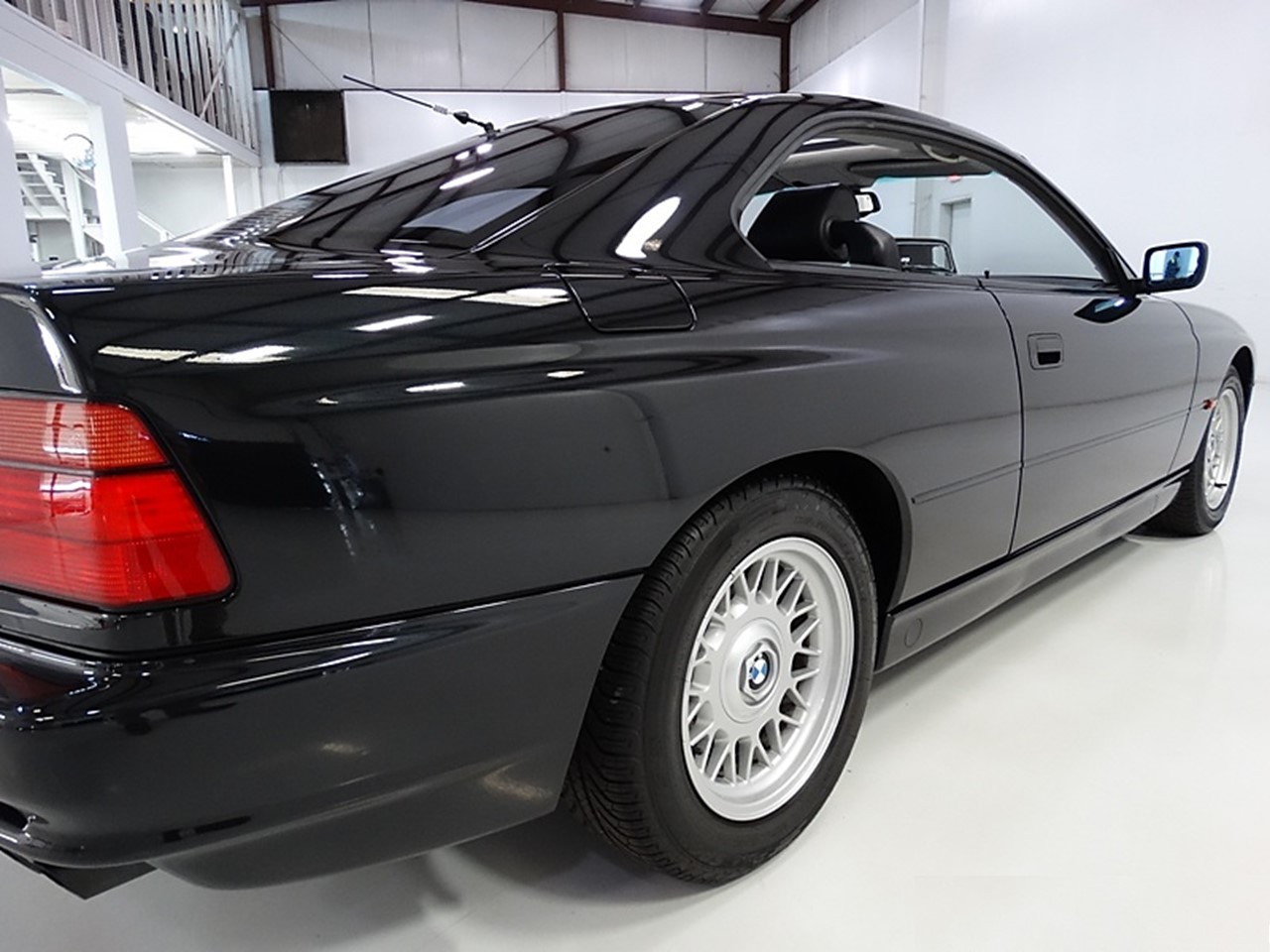 BMW introduces an unprecedented range of exciting new automobiles; each with a distinct personality and driving character. These are athletes of grace, providing enormous power, with championship performance. BMW’s are not ordinary automobiles…they are built for people who truly love to drive. Racing heritage is evident in every BMW model. New technologies are developed for, and tested on, the grueling Nürburgring race track – and the experience gained from the track is refined for road-going models. The 850 Ci is an excellent example of this philosophy… 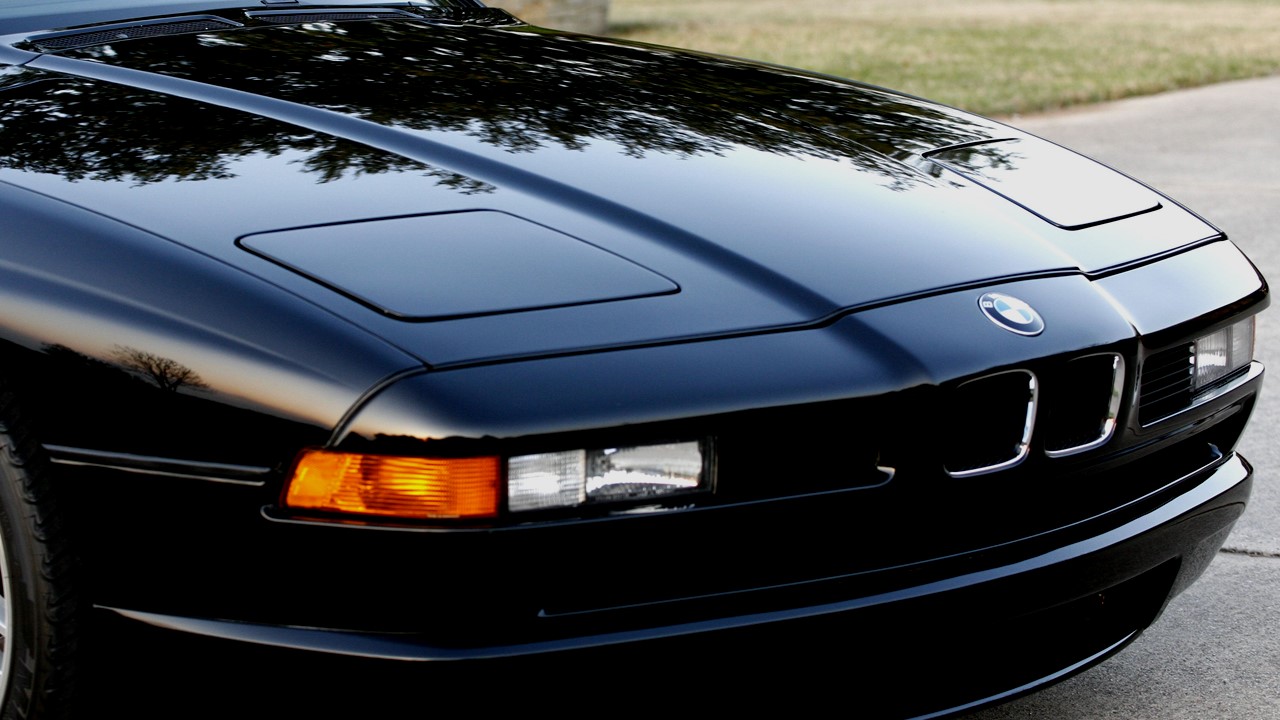 Without a slashing array of rhetoric…whether it is the V8 or one of the V12 engine configurations it is truly the ultimate driving experience…from the ultimate driving machine – “BMW also offers no less a paradigm of expressed individuality than do its products or its customers. And that distinct BMW character has been evident from very early on in its history.” BMW stands proud of its reputation for understated luxury and engineering prowess. BMW has always been deeply involved with motorsport; this dedication stamps a distinct and lasting mark on BMW automobiles – the handsome, aerodynamic BMW 850 Series represents excellence through innovation… 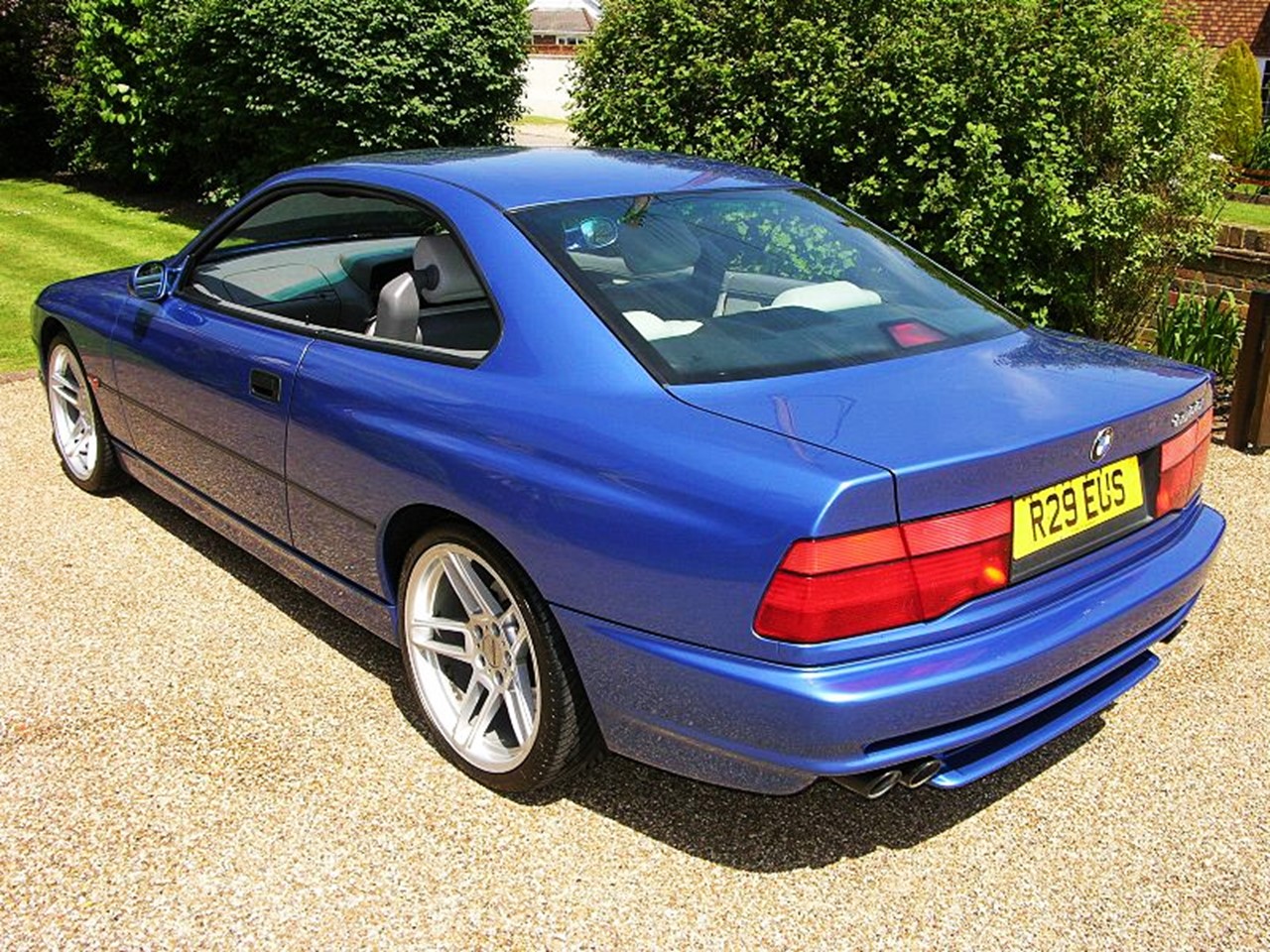 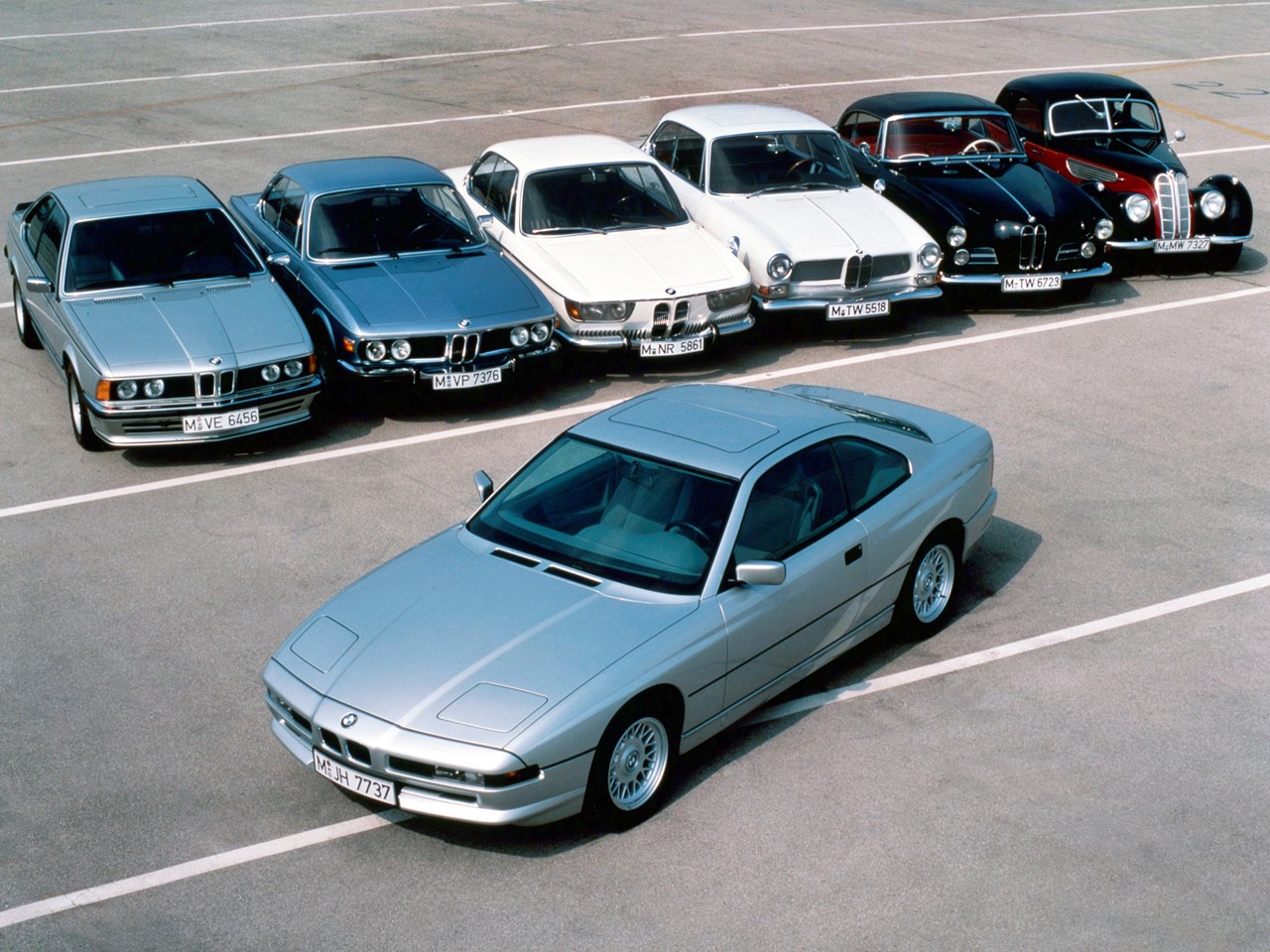 …from a vicious, unrelenting heritage – 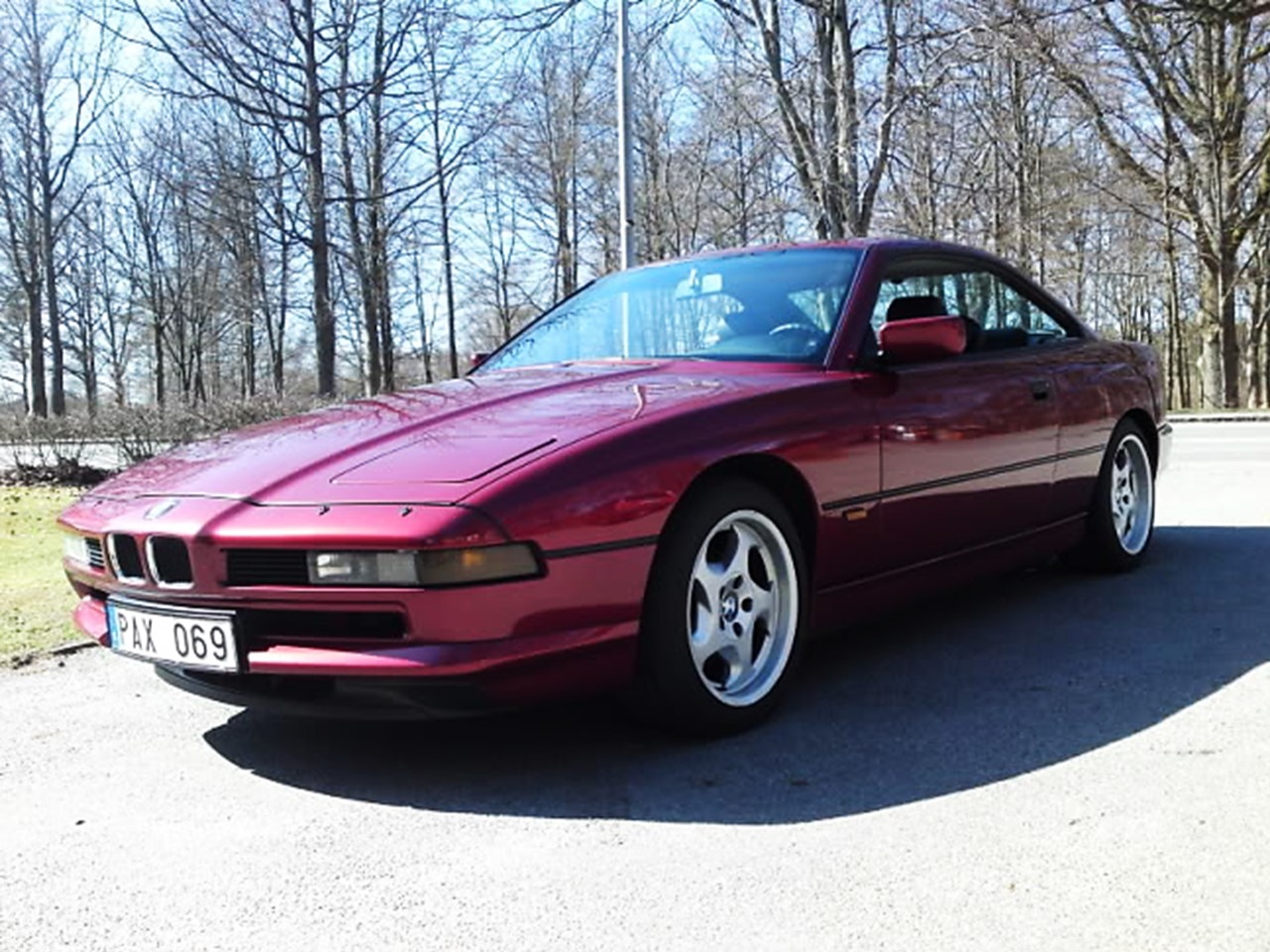 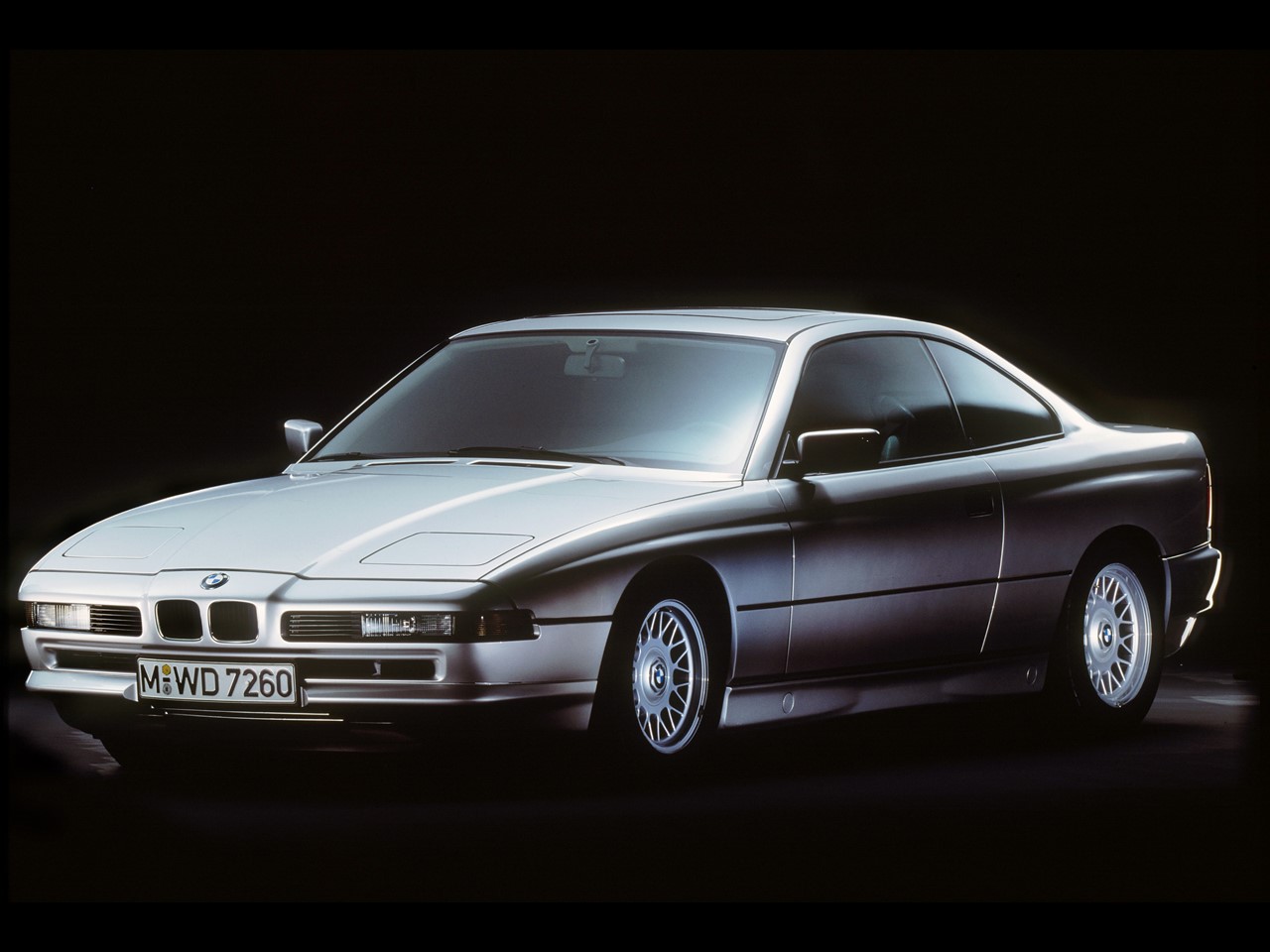 Brawn at its summit…the BMW 850 Ci