Who rocked the world with PONTIACTION in the 1960s?

Who invented the sport of “Wide-Tracking?” 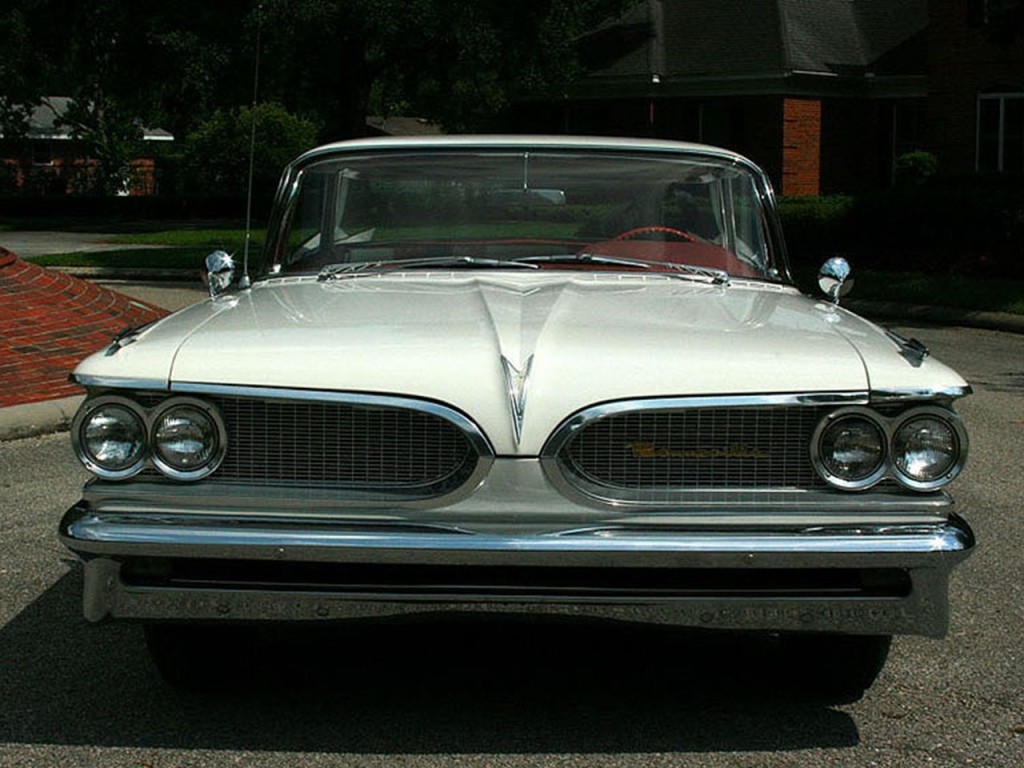 If you answered “Passionate Poncho” you are quite correct

The 1967 Pontiac Grand Prix is one of the most beautiful automotive designs of the 1960s. Pontiac is famous for inventing the sport “Wide Tracking” taking performance to a higher level. Pontiac introduced the widest automobile in the industry for the 1959 model year. Wide Tracking became famous with each subsequent model year. Boasting one of the widest stances for 1967 is the Pontiac Grand Prix convertible. This is the only year for the Grand Prix as a rag top. 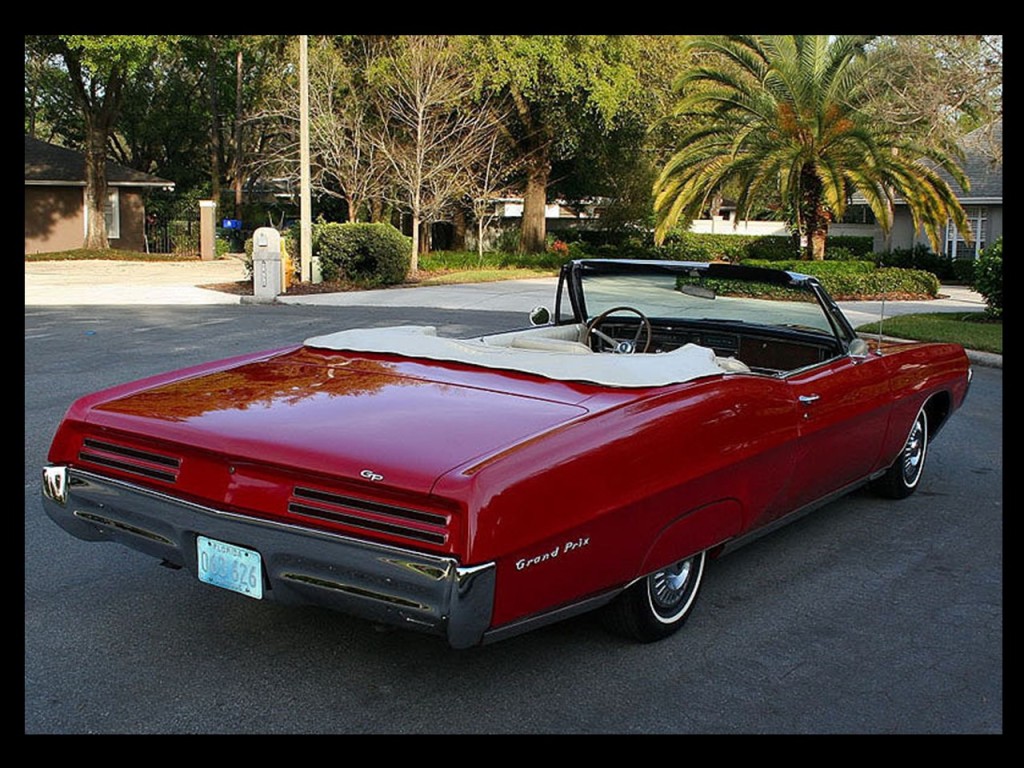 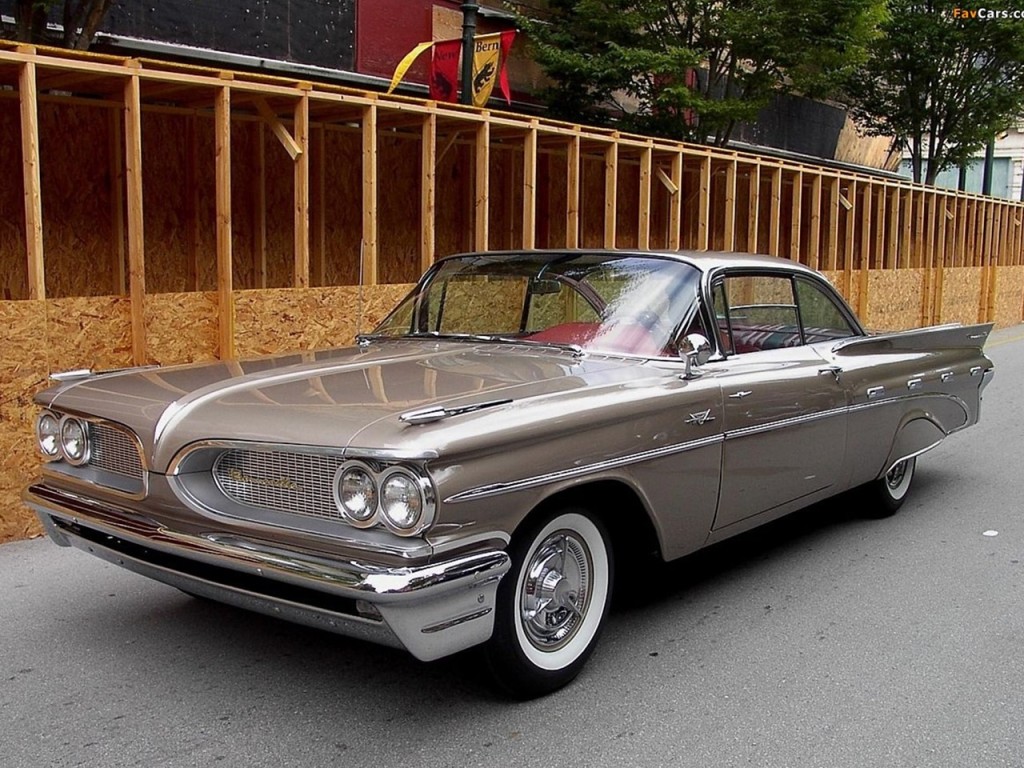 The 1959 Pontiacs had the widest stance in the industry…even wider than Cadillac! The Bonneville – introduced two years prior – was the luxury leader in the model hierarchy. Motor Trend Magazine picked the entire Pontiac model line-up as “Car of the Year” in 1959. The Pontiac Bonneville was” America’s #1 Road Car.” This is the birth of “Wide-Tracking”, Pontiac invented the sport. 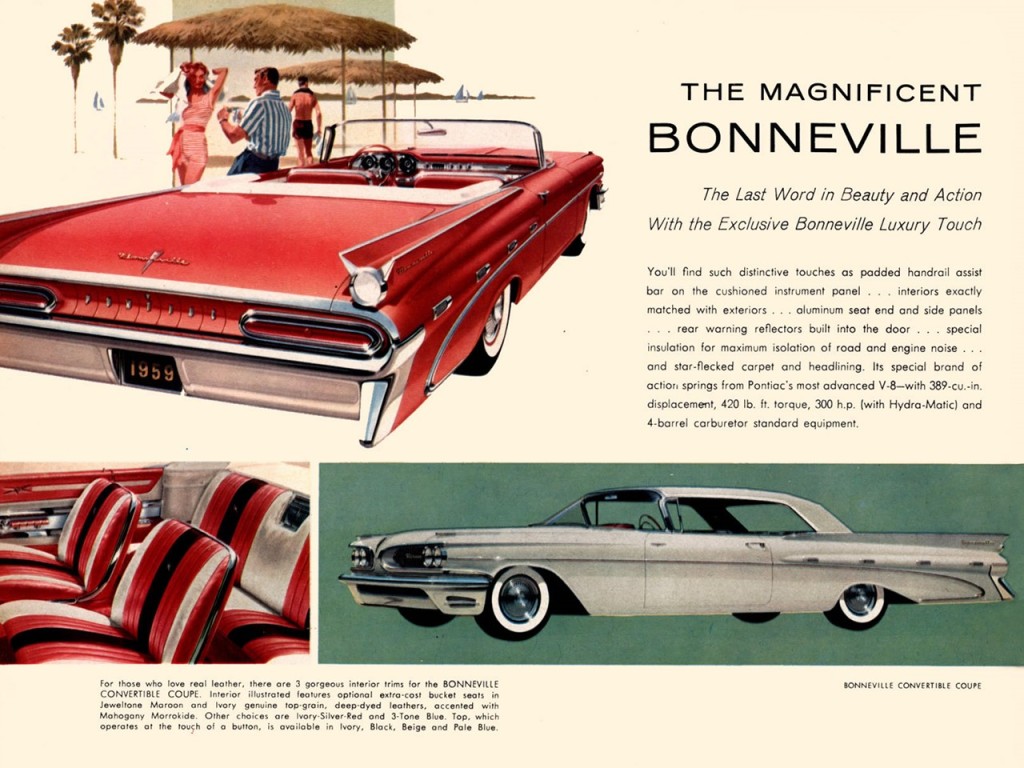 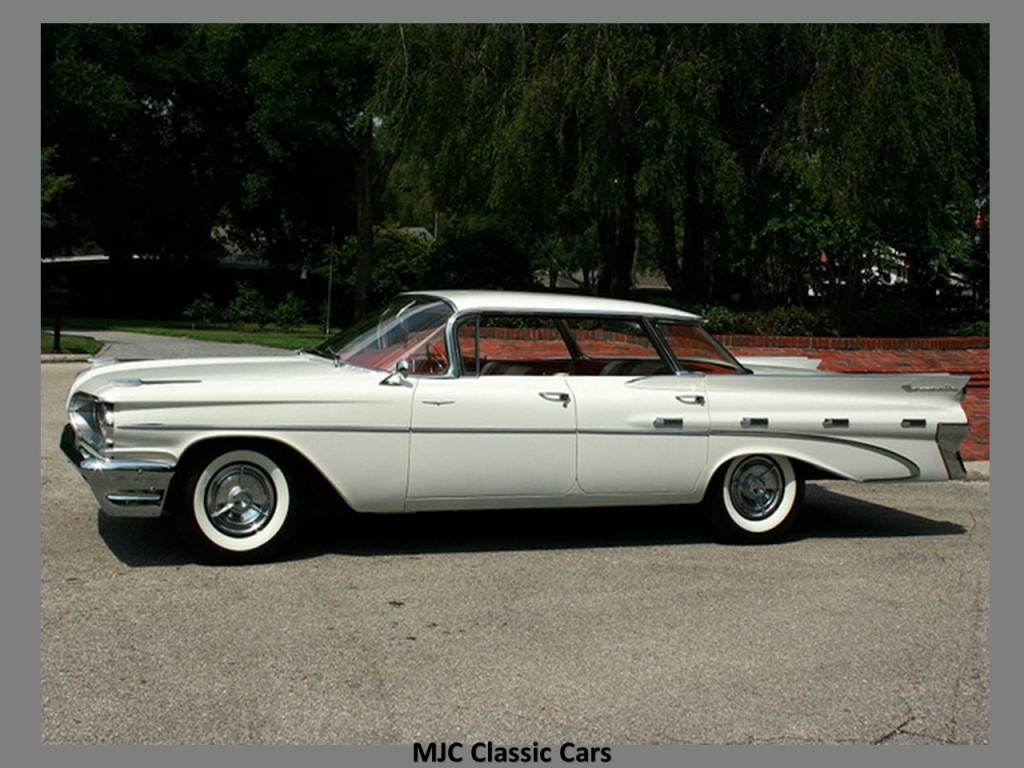 The 1959 Pontiac Bonneville rides upon a long 124” wheelbase, and is a luxurious 220.7” in length. All 1959 Pontiacs were 80” in width…wider than anything on the road at the time. A potent 345 hp version of the 389 CID V8 engine with “Tri-Power” was available. This has a three two barrel carburetor set-up. 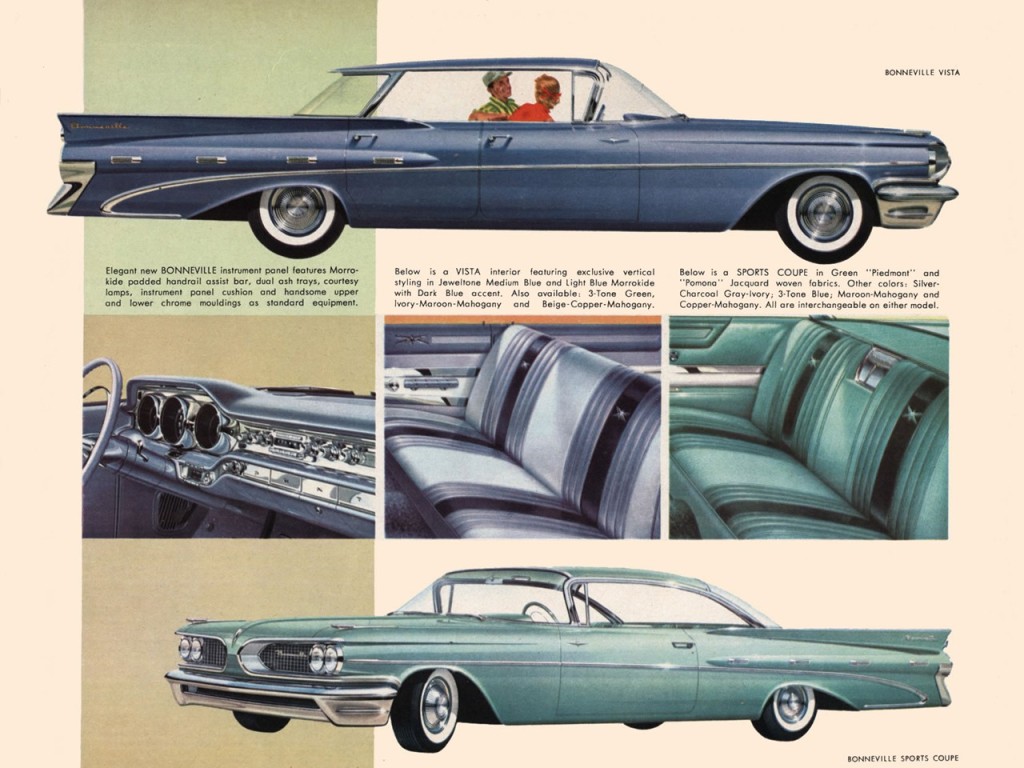 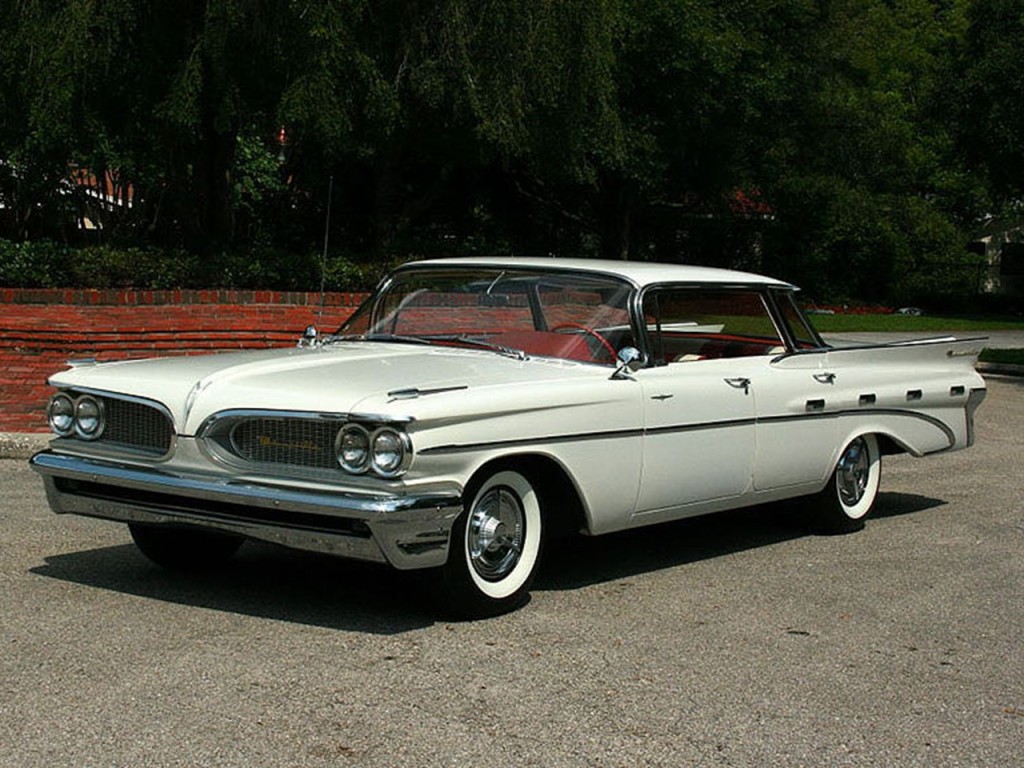 Wide-Tracking was the hottest new version of Pontiaction. The wide track afforded greater stability and smoother overall operation. The magnificent 1959 Pontiacs were the last word in beauty and action, with the exclusive Bonneville luxury touch – 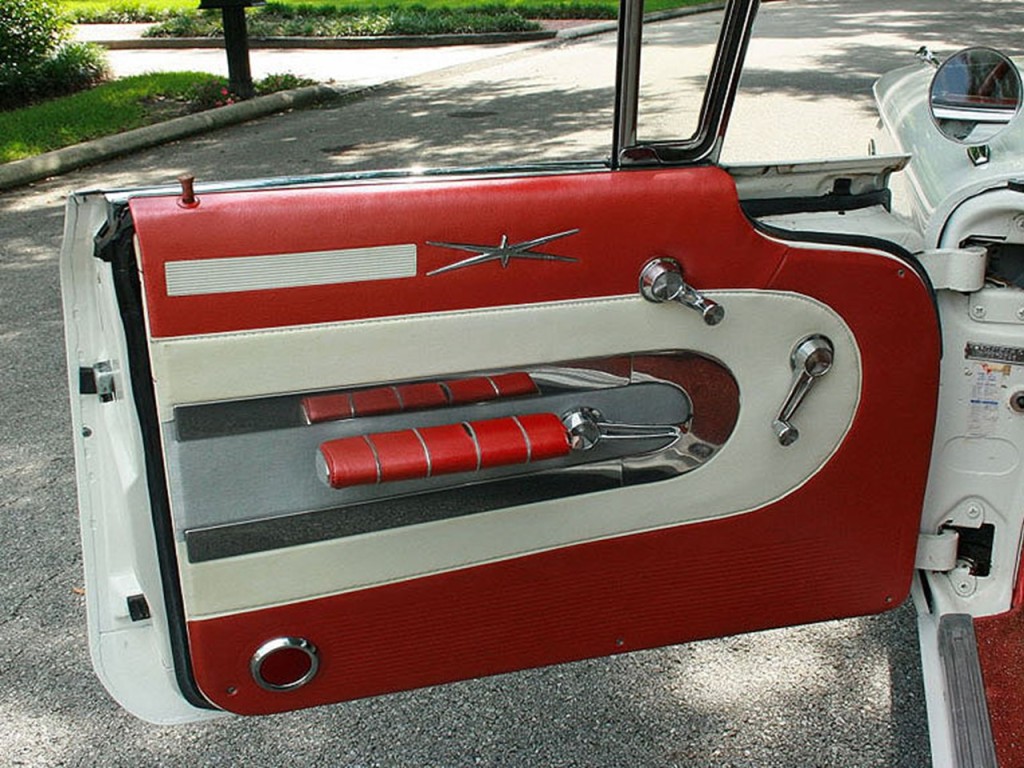 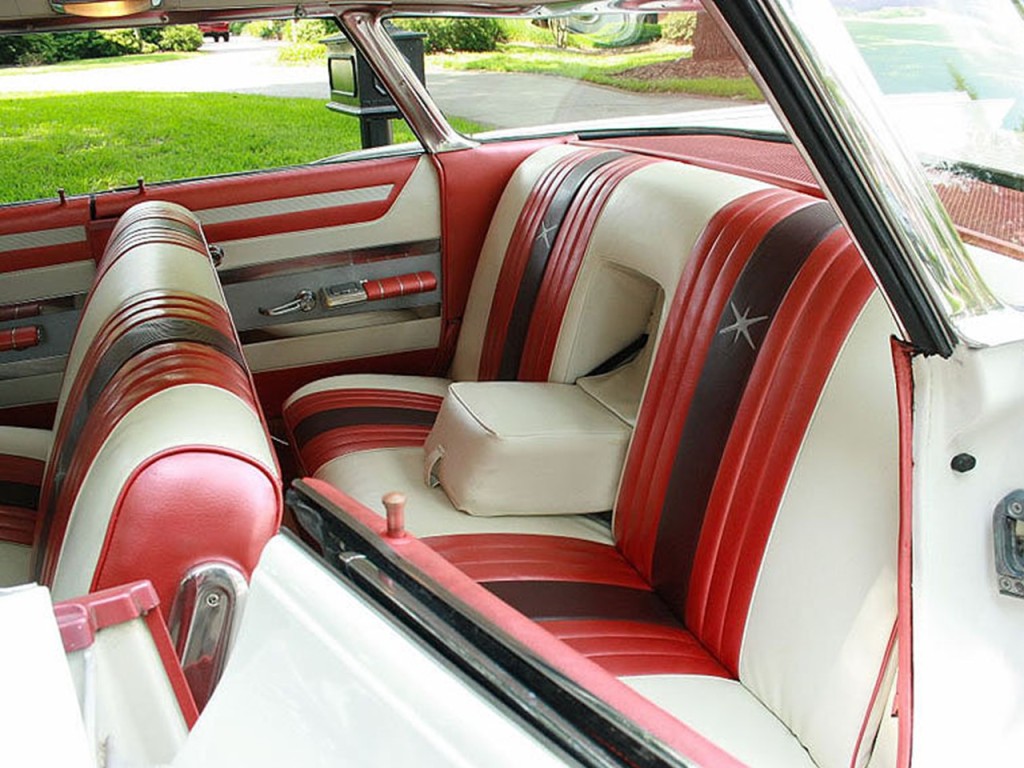 Bucket seats were offered for coupe and convertible models 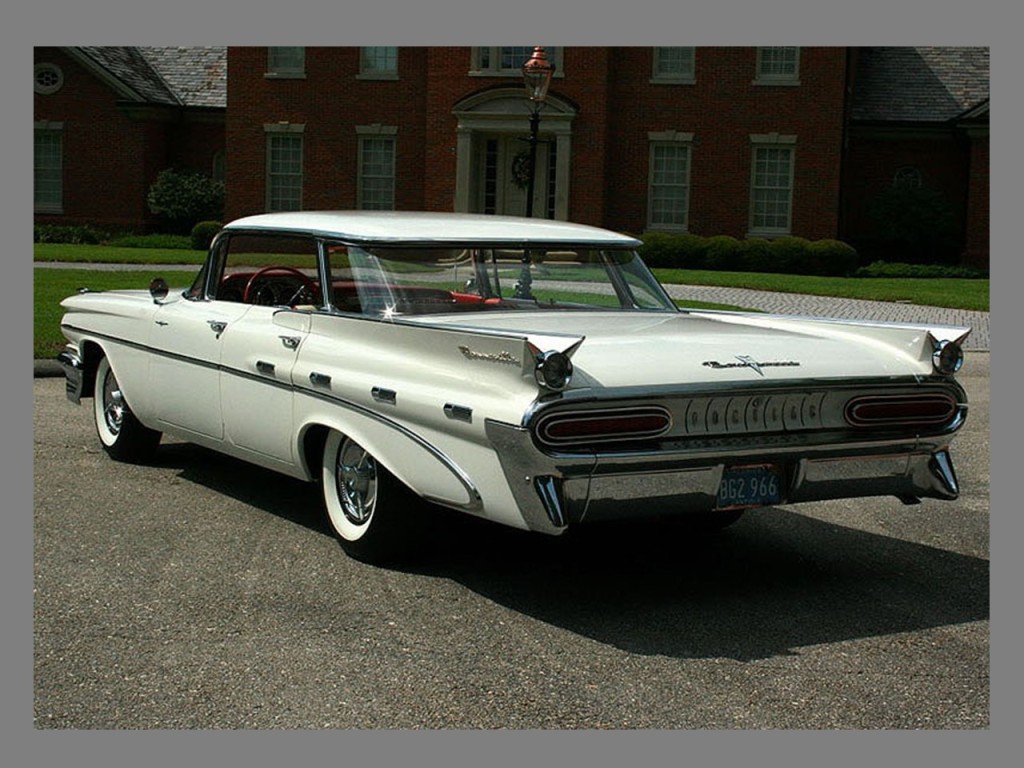 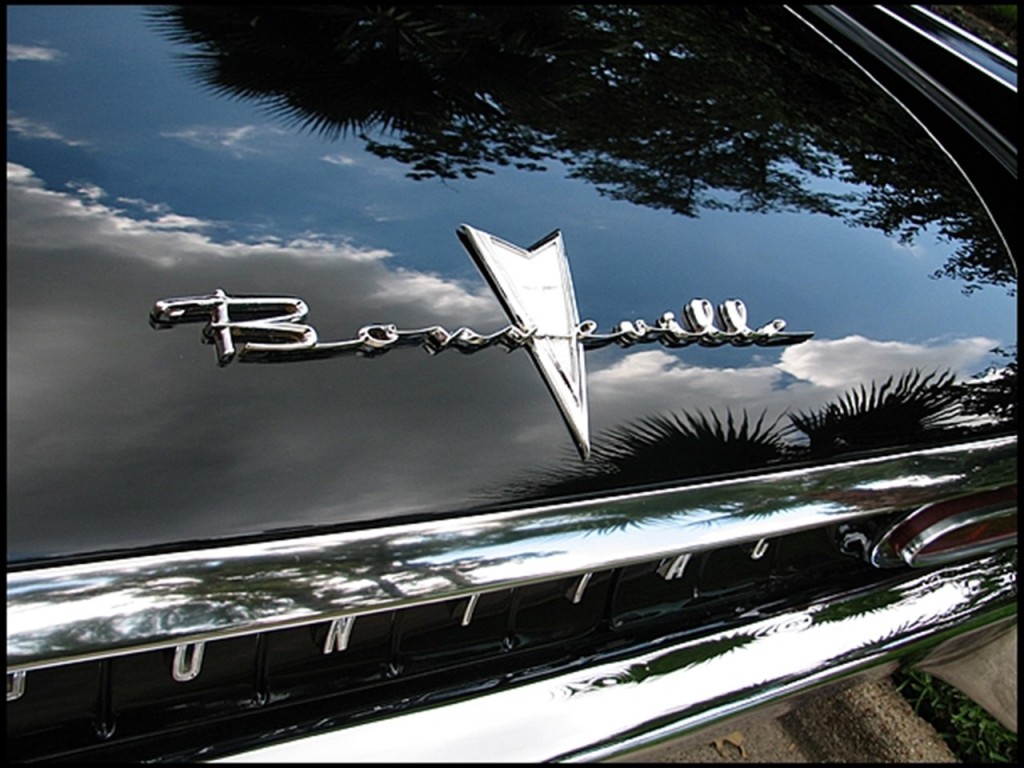 The Pontiac Grand Prix is another lesson in automotive economics. It began in the early 1960s as an idea which John Q. DeLorean brought to life for the 1962 model year. Pontiac used the existing platform from the modest Catalina series. The designers gave the car a new more luxurious pillarless hardtop changing the appearance by upgrading the exterior showroom trim. The interior received sporty bucket seats with a locking center console. The elegant refinements escalated this new model to superlative status in the model hierarchy.

This design concept combines the high unit revenue of a luxury automobile with the low start-up cost and fixed cost amortizing utility of platform sharing. (Ford used this principle to design the Continental MK III using the Thunderbird long wheelbase platform in 1969) The Pontiac Catalina provided the foundation for the luxurious Grand Prix. It was an immediate success. Style code #266-67 1967 Grand Prix convertible had a base price of $3,813 and only 5,856 were built which makes this a highly collectible car. This is the only year the Grand Prix was offered as a convertible. 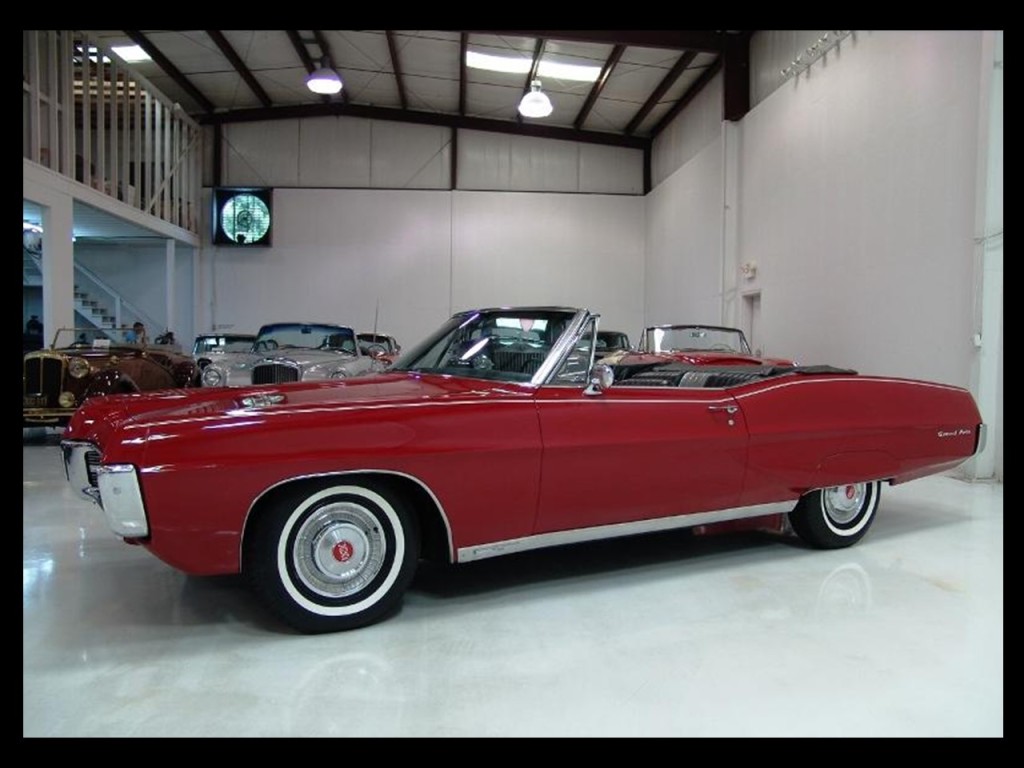 The Pontiac Grand Prix is a luxury performance automobile. The first generation built from 1962 until 1968 were trimmed to standards similar to the Bonneville. It was John Q. DeLorean that designed the Grand Prix and the GTO. Generation two built from 1969 until 1972 is the last of the notable Grand Prix models. The model slipped into obscurity after 1977…it lost not only its exclusivity but its identity as well. The charismatic Grand Prix had lost all its charm by 1977, and anything after this model year was completely out of character for the once popular model.

The 1967 Pontiac Grand Prix convertible is smooth, quiet, and luxurious. It possesses an elegance not associated with a Pontiac. This open grand tourer combined the high-performance of a sporting machine with a luxurious attitude. It is truly a unique automobile. “Pontiaction and “Wide Tracking” were well under way by the 1967 model year. The Grand Prix convertible wore the all-new styling for the full-size Pontiacs very well indeed – 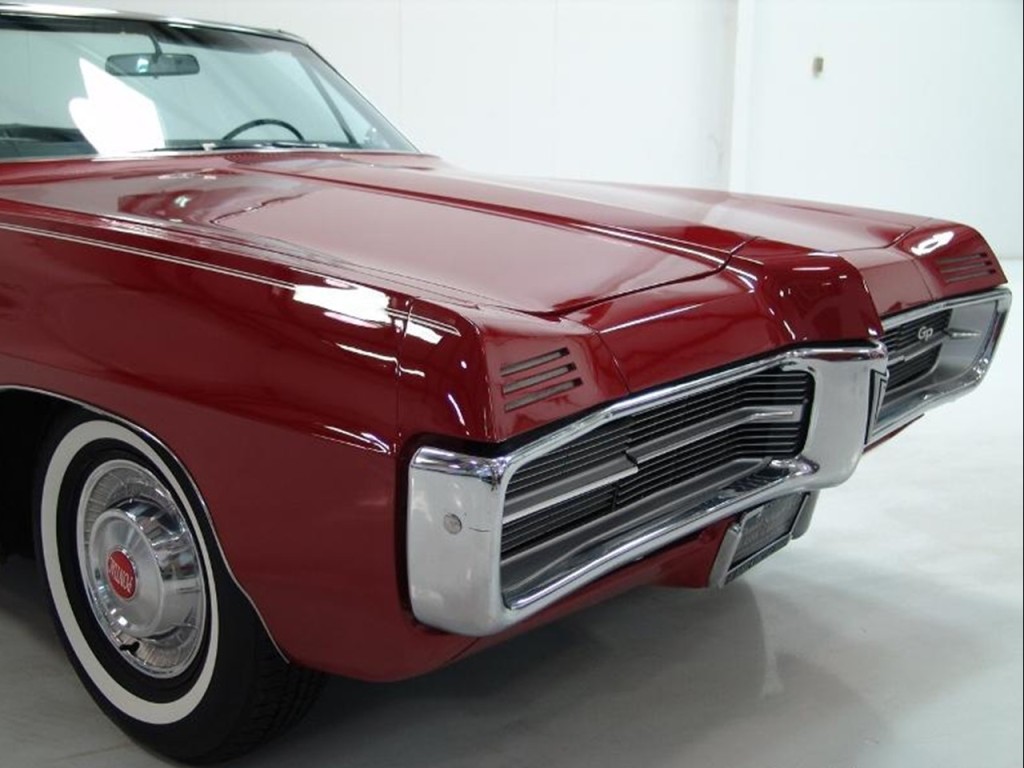 The 1967 model year offered a completely restyled Grand Prix. The beautiful new design is one of the most luxurious Pontiacs ever offered. The signature features for the Grand Prix includes hide away headlamps with its parking lamps concealed behind vent-like structures atop the front fenders. These styling cues weren’t shared with any other full-size Pontiac.

The massive hood contours flow forward into the “Pontiac-style” grille divider. The windscreen wipers are concealed so as not to interrupt the Grand Prix’s sweeping design. The rear end styling of the Grand Prix was also unique to this model. The taillamps are beautifully integrated into twin slots. Its clean uncluttered look is understated yet totally luxurious. Wide Tracking drama continues…

The silhouette is unmistakably Pontiac. It is long, low, and wide. The Grand Prix convertible is the supreme example of elegant restraint. The sweeping contours of the body sides are augmented by classic fender skirts. With the top down, the architecture spans for miles…it appears longer than it is. The Pontiac Grand Prix had been setting standards for personal luxury cars since its inception. The 1967 Grand Prix ragtop doesn’t know whether it wants to be a luxury convertible or a high-performance convertible…so it does both quite well – 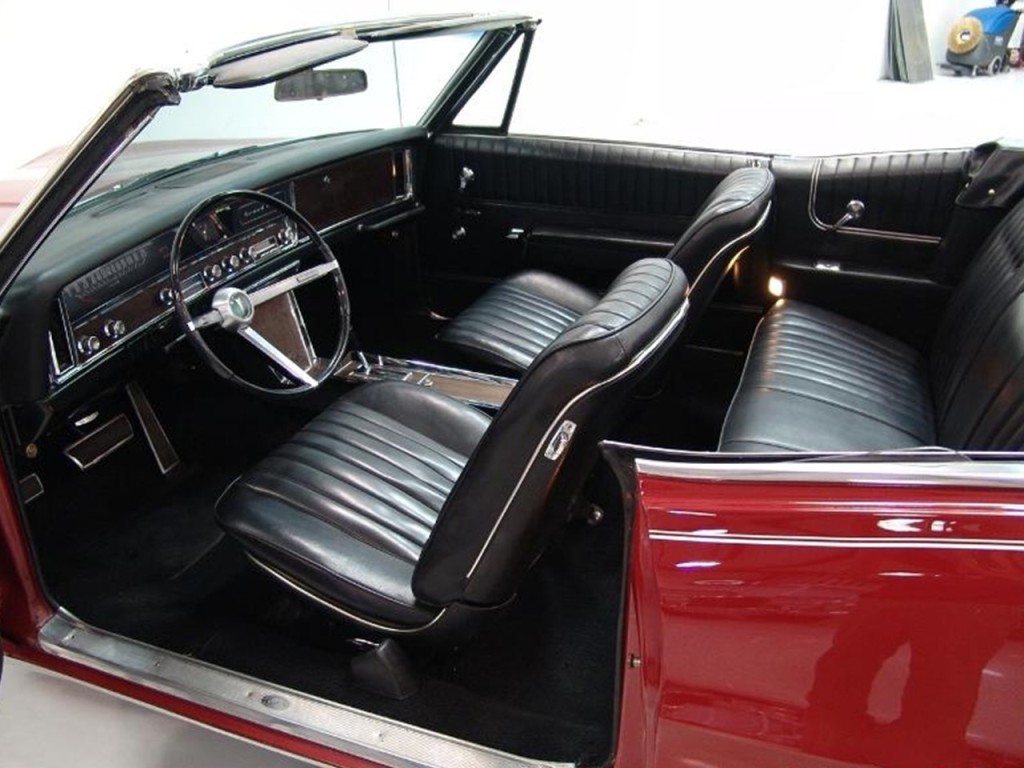 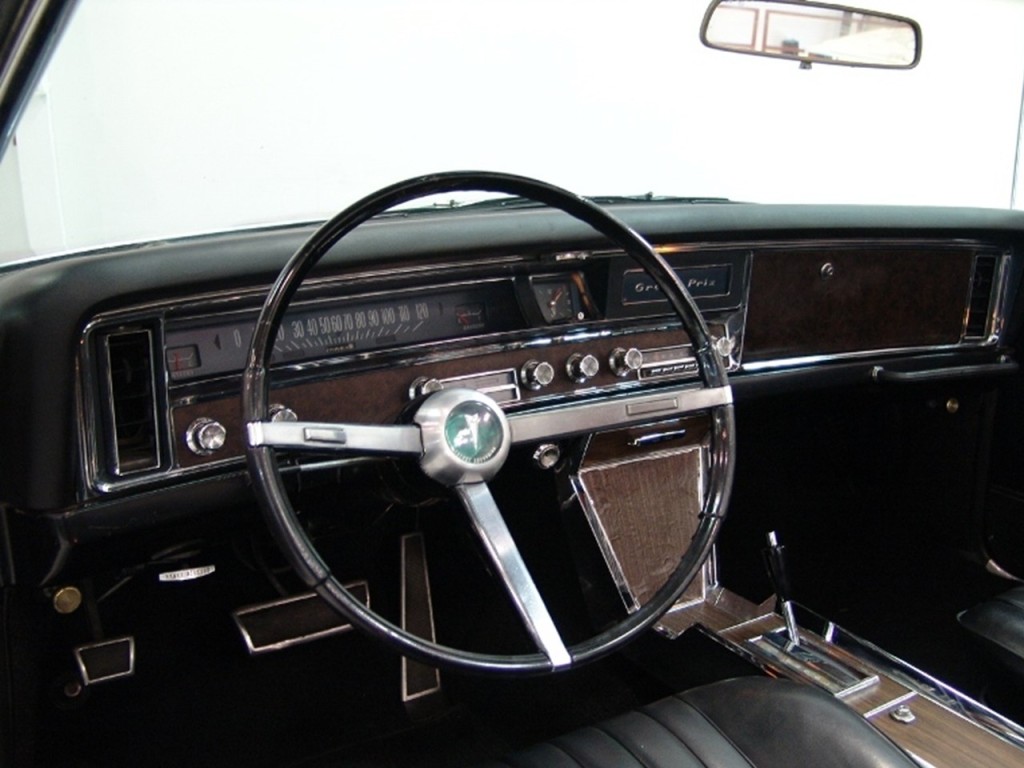 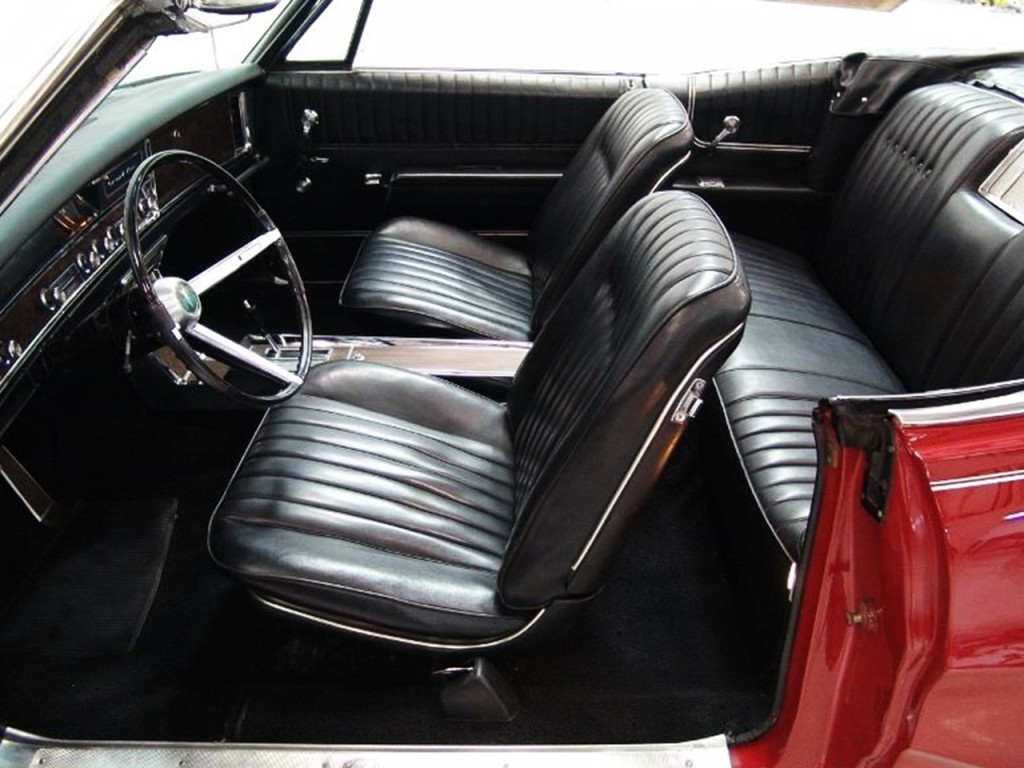 The Grand Prix convertible came standard with a 400 CID 16-valve V8 engine that produced 350 horses. This new engine received an upgraded block with new cylinder heads with all-new ports. New heads increased air flow from 30 to 35 percent; its new design was even more superior to that of the 421 Super Duty V8 engines. Valve diameters were increased refining both intake and exhaust phases. A 428 CID 16-valve V8 engine was optional. It produced 360 horses. Quad-power carburetion boosted the hp to 376. The legendary Tri-Power carburetion was no longer available.

There were options available to tailor the Grand Prix convertible to exacting standards. There is a 3-speed column shift manual, 3-speed floor shift manual, 4-speed manual with floor shift, and the silky-smooth Turbo Hydra-Matic automatic transmission. An upgrade for the rear axle, firmer shocks, and springs were also available to program the 1967 Grand Prix convertible to further suit its owner’s taste in driving style. Pontiac put excitement into every mile driven – 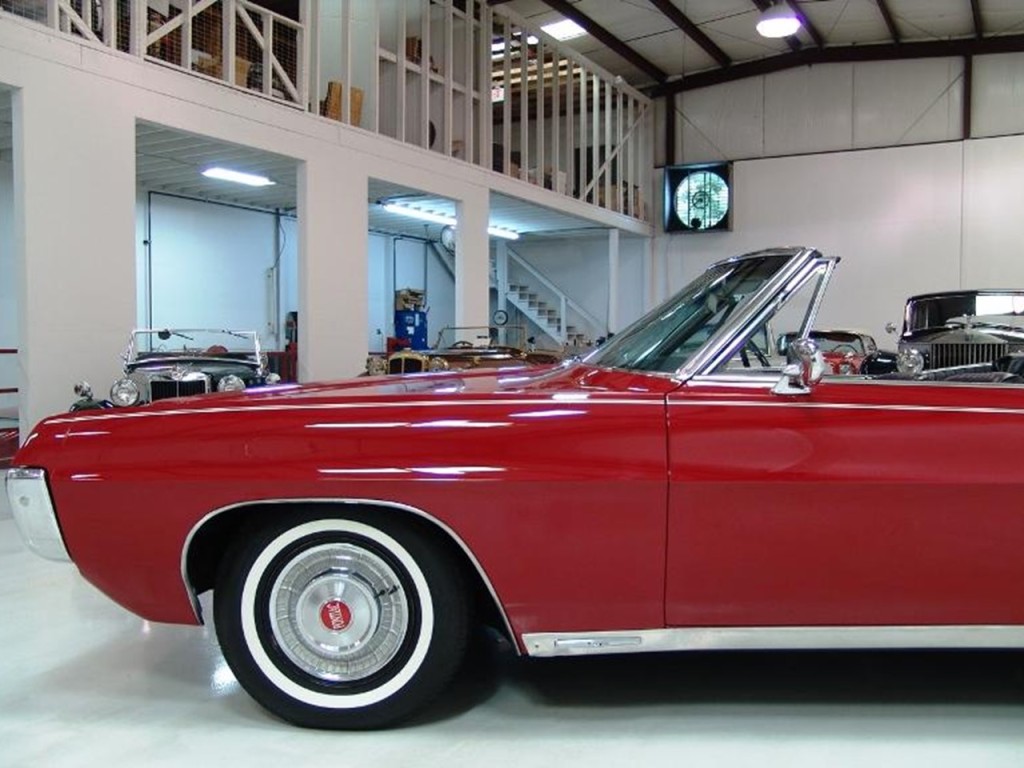 The 1967 Pontiac Grand Prix convertible is built as body on frame construction. It uses a boxed perimeter frame with ‘swept-hip’ design. The passenger cell is surrounded by heavy steel side members. Five cross members join parallel bars to increase structural rigidity. The rear cross member permits the “bumper to frame” design which increases impact resistance from the rear.

The beautiful body by Fisher is all-steel with reinforced side rocker panels. Both hood and trunk are counter-balanced. The windscreen is made of laminated safety plate-glass. Solid tempered safety glass is used for side and back glass applications. Its power, fully automatic folding fabric roof deploys effortlessly folding inward for a neater appearance. 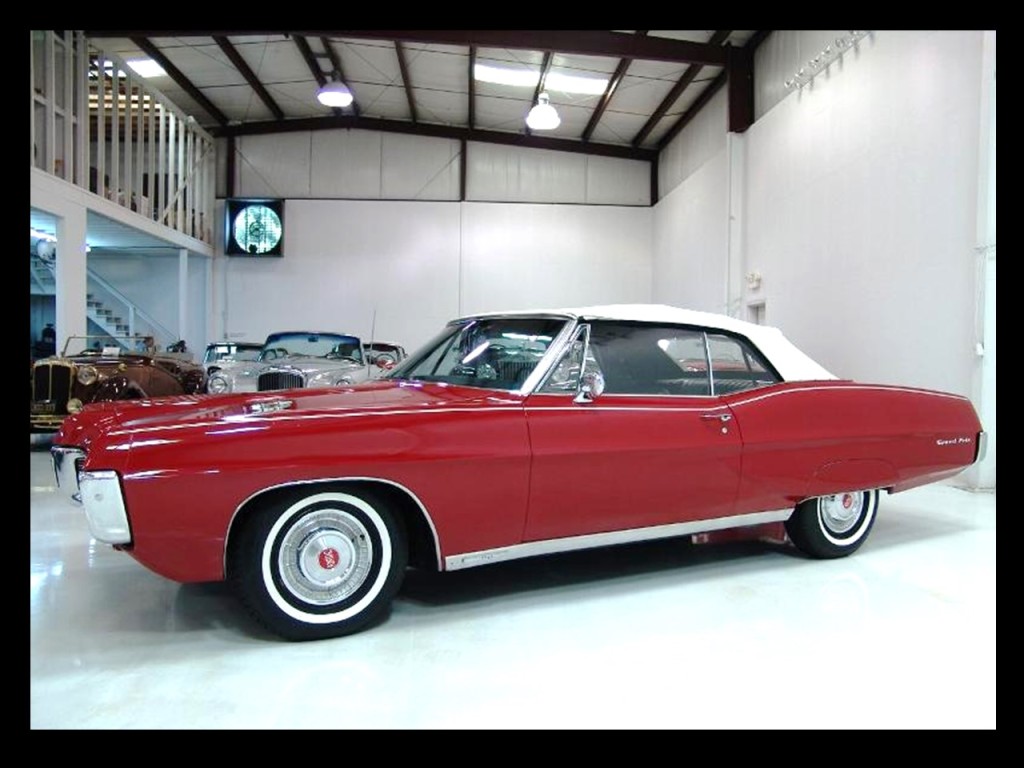 The 1967 Grand Prix by Pontiac is an elegant open tourer. Luxury usually not associated with the brand is exhibited Wide-Track style. This is the only year for the Grand Prix convertible which makes it an attractive investment guaranteed to increase your investment. Only 5,856 were built for the 1967 year. The Pontiac Grand Prix is a unique personal luxury car that combines the elegant attributes of a luxury car with ferocious high-performance capabilities.

From its dramatic front end ensemble…through the sweep of its chiseled bodyshell…back to the sculpted rear end design, the 1967 Pontiac Grand Prix convertible is Wide-Tracking in its most luxurious form. Pontiaction is a sport invented by the brand. There will never be another automobile like the Pontiac Grand Prix convertible…there’s nothing like Pontiac excitement –

Special thanks to Daniel Schmitt & Co, and MJC Classic Cars