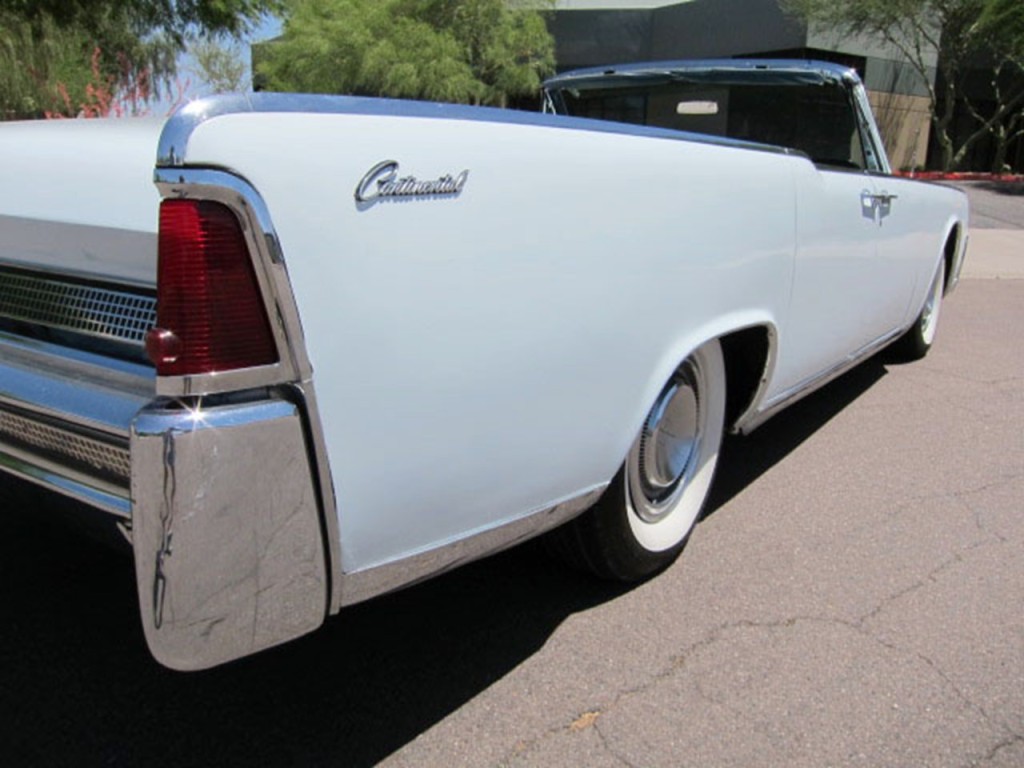 Lincoln Continental for the 1964 model year was refined even further to enhance the “Continental” experience. Its increased size added spaciousness. It is a design masterpiece that is simple yet unmistakably Lincoln Continental in every manner of eloquence. The 1964 convertible was the world’s only four-door convertible.

With its restrained use of ornamentation, it escaped the excesses of the 1950s. A Lincoln Continental has always been graceful, poised, and luxuriously proportioned. Lincoln had finally caught up with Cadillac. Owner loyalty had surpassed the “Standard of the World.” Continental owners loved their cars and were keeping them longer. The 1964 Continental four-door convertible was a new adventure in paradise…welcome to The Continental Life – 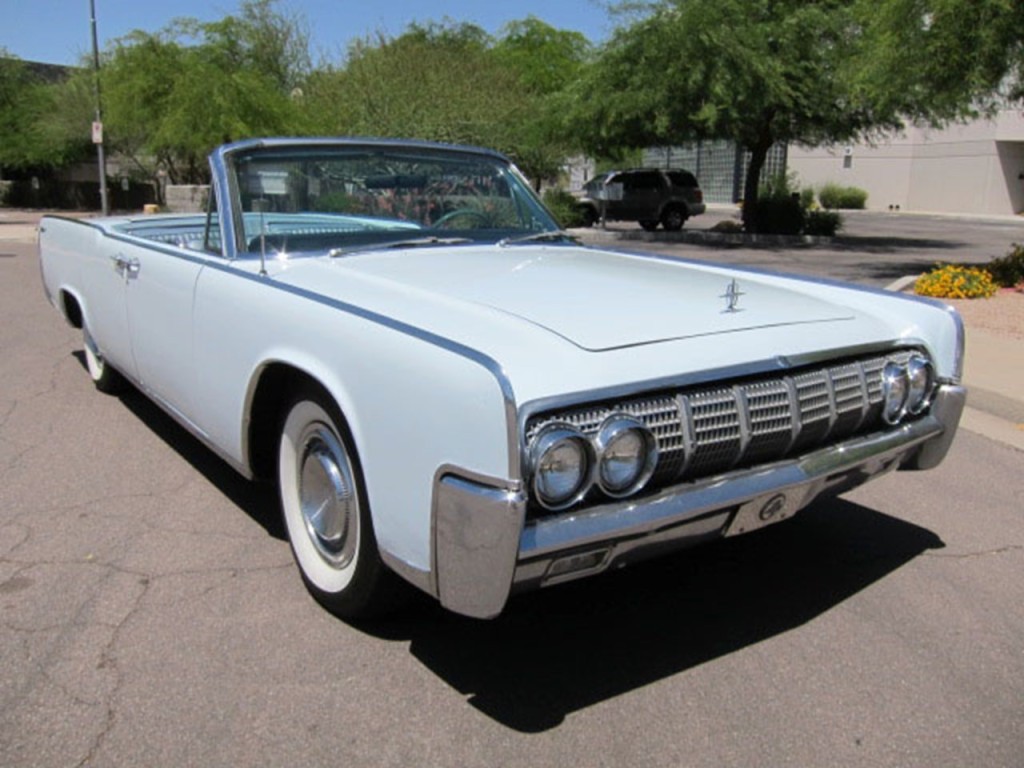 Style code #86 74A 1964 Continental four-door convertible had a base price of $6,938 and only 3,328 were built. This is the first significant styling change since 1961. Elwood Engel’s design is one of excellence…the Lincoln Continental had finally gained an identity. Lincoln discretely lengthened the bodyshell and wheelbase to provide more rear seat room which had been the biggest gripe among owners of the 1961-1963 Continentals. The sedans received a new roofline that no longer sloped inward.

The curved side glass was replaced with more cost efficient flat glass. As a rule of thumb when restoring a vehicle; the more ‘curve’ there is to the glass…the more the $$$, why, ask anyone restoring one of the old Camaro/Trans Am coupes with those large canopy rear back glasses! The  Continental’s new roof structure on the sedans increased overall headroom.

If you have ever seen these four-door Lincoln Continentals as they stow away their roof…it’s quite a show-stopper! The first stage occurs when the rear forward-opening rear deck lid raises and an extension panel that forms the boot opens outward, the top unlatches itself lifting and folding away the fabric roof neatly beneath the rear deck lid. 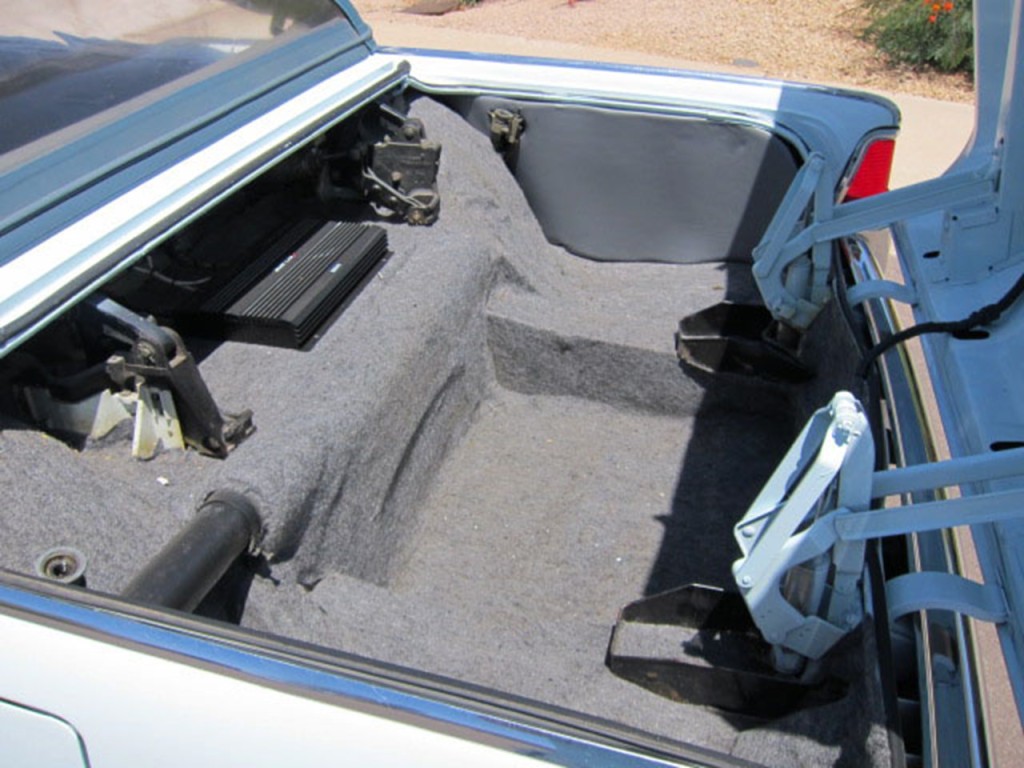 It’s totally unique among luxury automobiles. The signature knife-blade fenders are augmented by elegant forward-opening rear coach doors. With the convertible top stowed away, the look is clean and uncluttered. The manner in which the roof disappears completely out of sight gives the car’s architecture an endless look which was so typical of American luxury automobiles.

The standard fully automatic power folding fabric roof operates effortlessly. This feature can be operated from outside the vehicle on 1967 and onward models via lock at driver’s side rear quarter panel beside the fuel filler door. Styling continuity of design concept is the hallmark of the Lincoln Continental. The famous profile is retained and each is built to the highest standards. 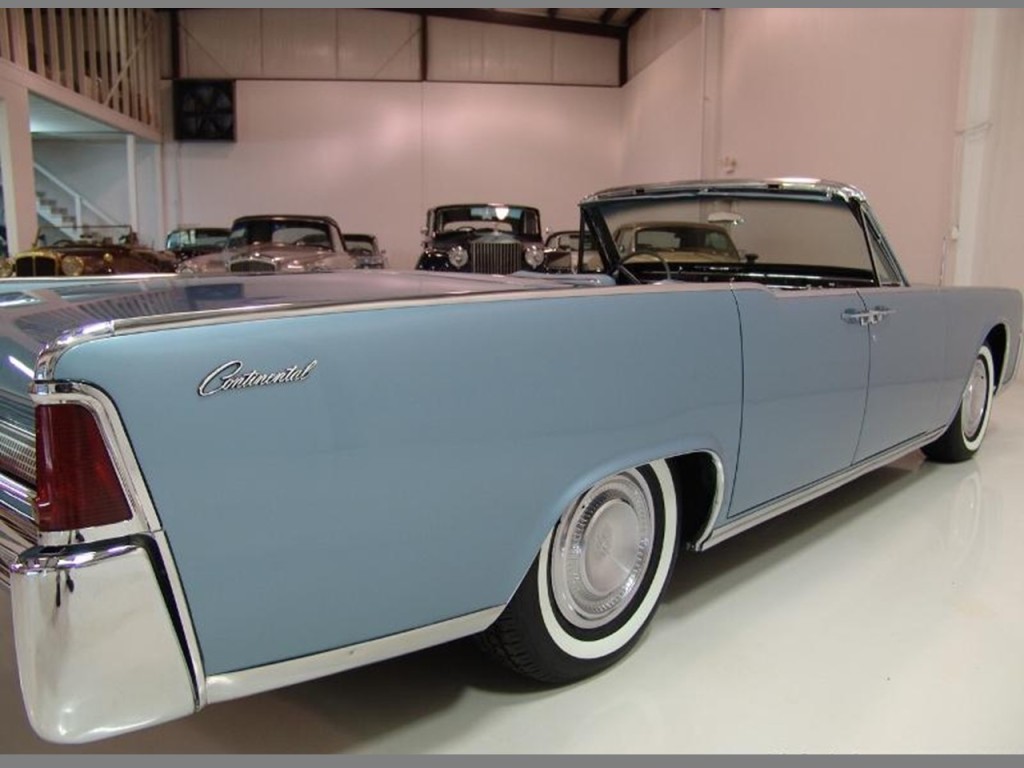 The 1964 Continental convertible was substantially larger than it had been since the 1961 redesign when it was down-sized from its Goliath counterpart, the 1960 behemoth. Leg room is increased by 4” in the rear compartment. Knee room is more than double that of the 1961 model. Usable trunk space increased also; it is 15% larger than the previous model. Lincoln worked to fashion an identity and a unique signature appearance. The 1961 paved the way; the 1964 reinforced it…gracefully. 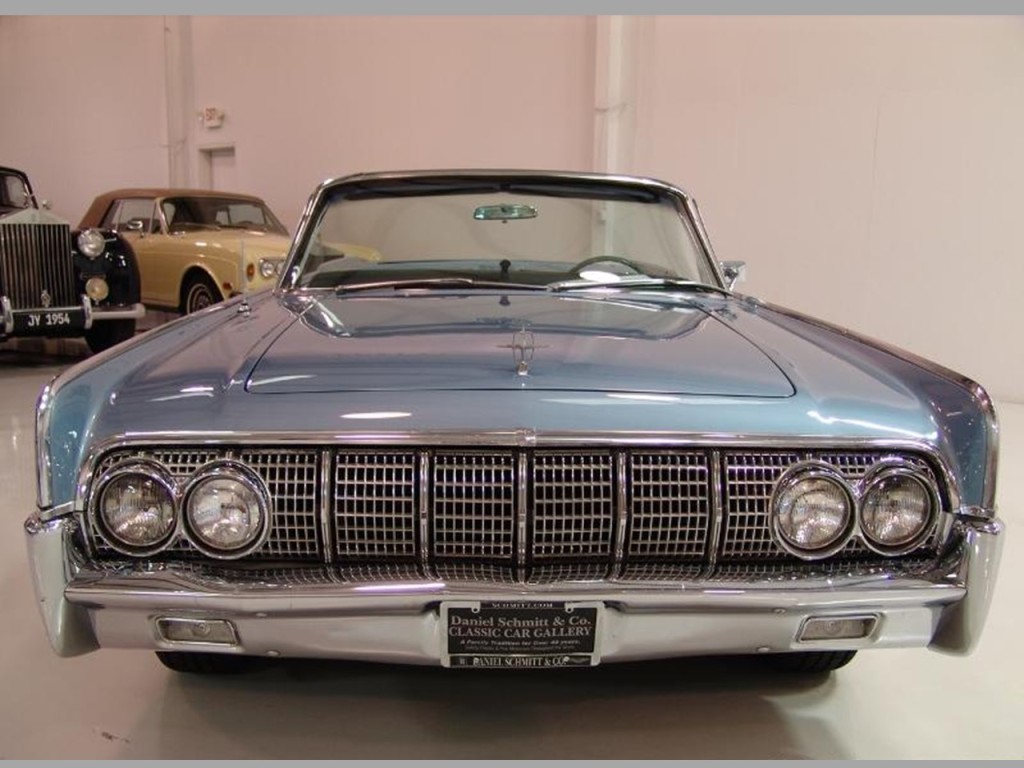 There are changes… albeit, refinements aren’t SCREAMING improvement, they subtly blend into the car’s design. The 1963 models closely resemble the 1964 models. Upon closer inspection, the rear doors are 3” wider and the rear glass is restyled giving the car a more contemporary look.

Its front end styling ensemble presents a new grille. A new rear deck lid banished the concave look from the previous model. It sports a rear grille that matched the grid from the front grille. Lincoln used caution with the 1964 redesign change. They did not want to alienate the following that began to notice the Lincoln Continental in 1961 –

It is not only more space but new luxury as well. Glove-soft hand-tailored leather upholstery is standard for the Continental convertible. New door trim panels compliments the new look. The Lincoln Continental is the first American automobile to mount the inside rear view mirror directly to the windshield. New French seams detail the leather upholstery for added elegance. Come experience The Continental Life – 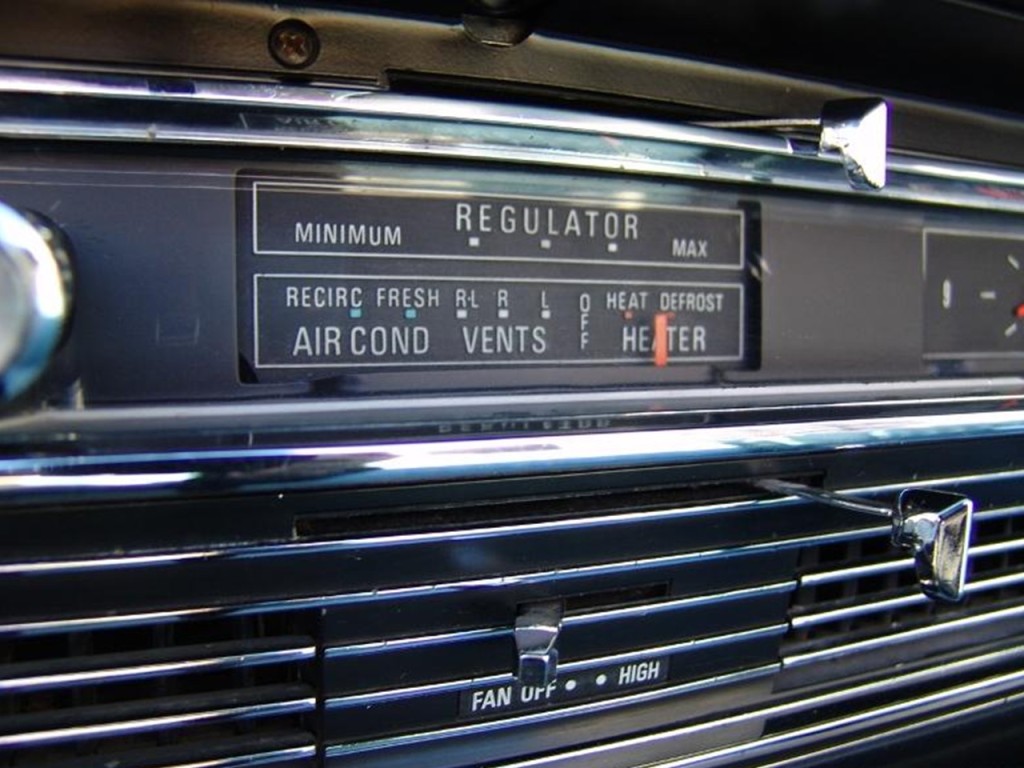 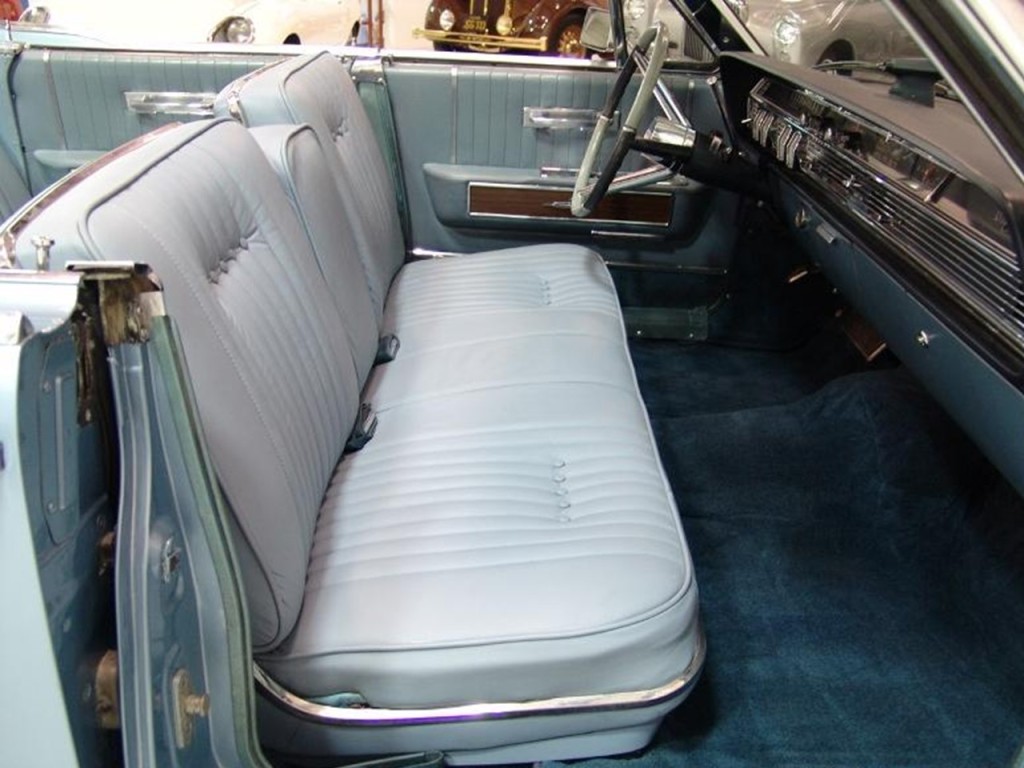 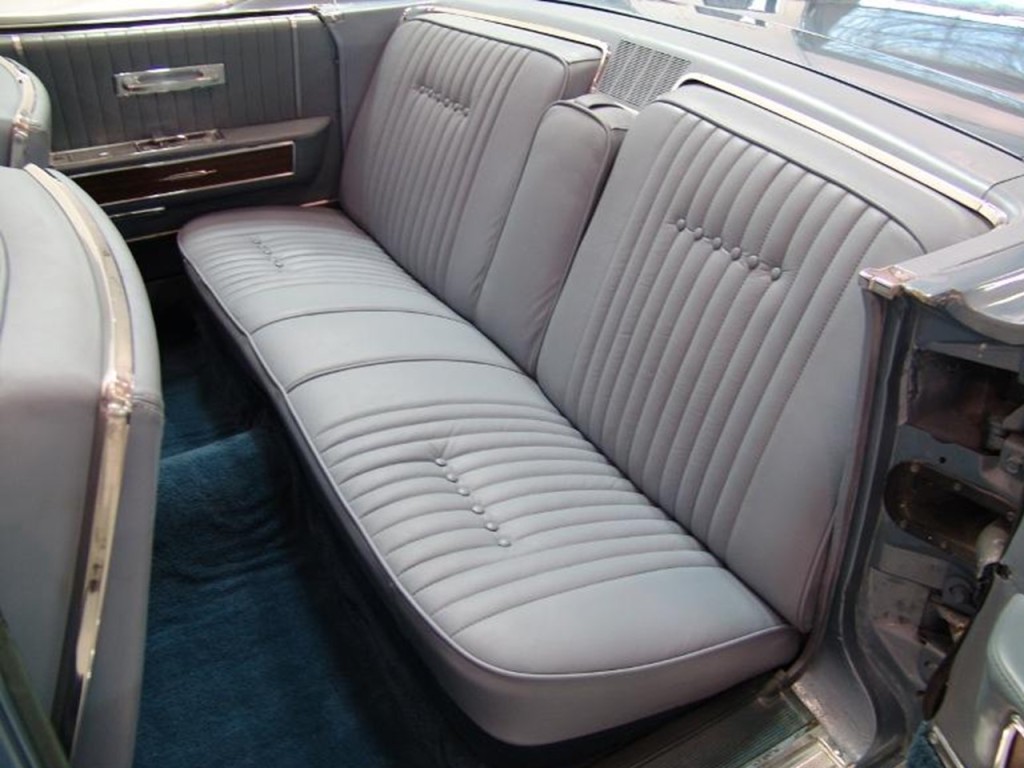 The 1964 Continental four-door convertible has the strongest production automobile bodyshell made. The integral unibody construction structurally welds the bodyshell and chassis together. Its side rails are made of steel. These automobiles had more stainless-steel and galvanized steel than any other car at the time. 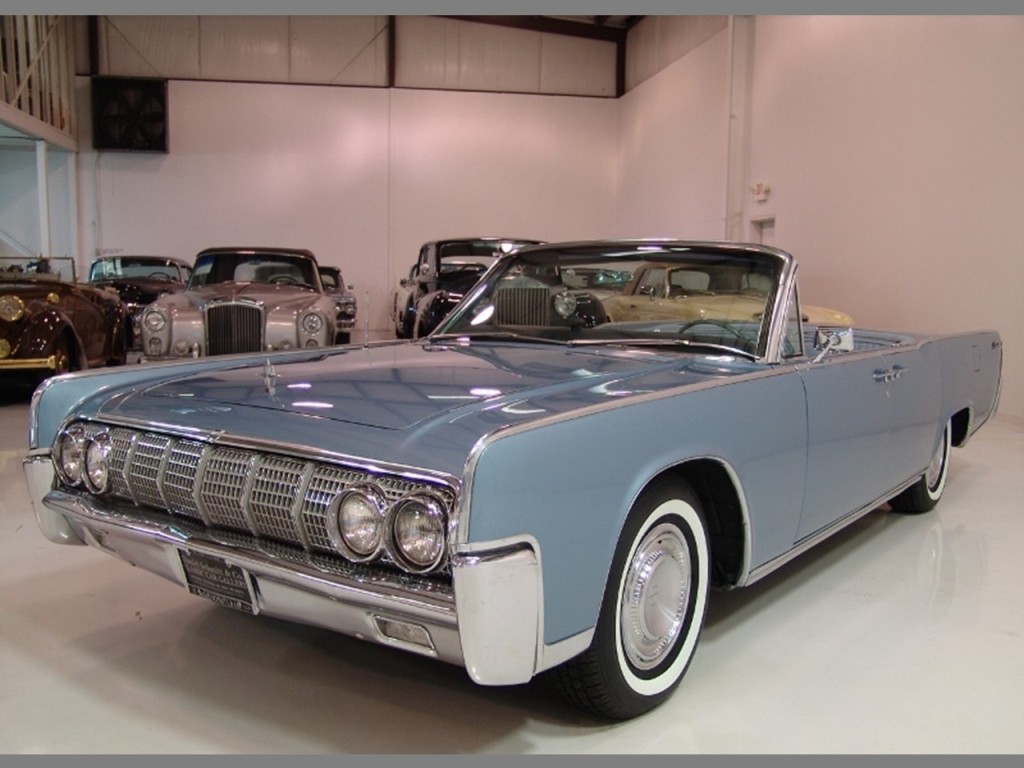 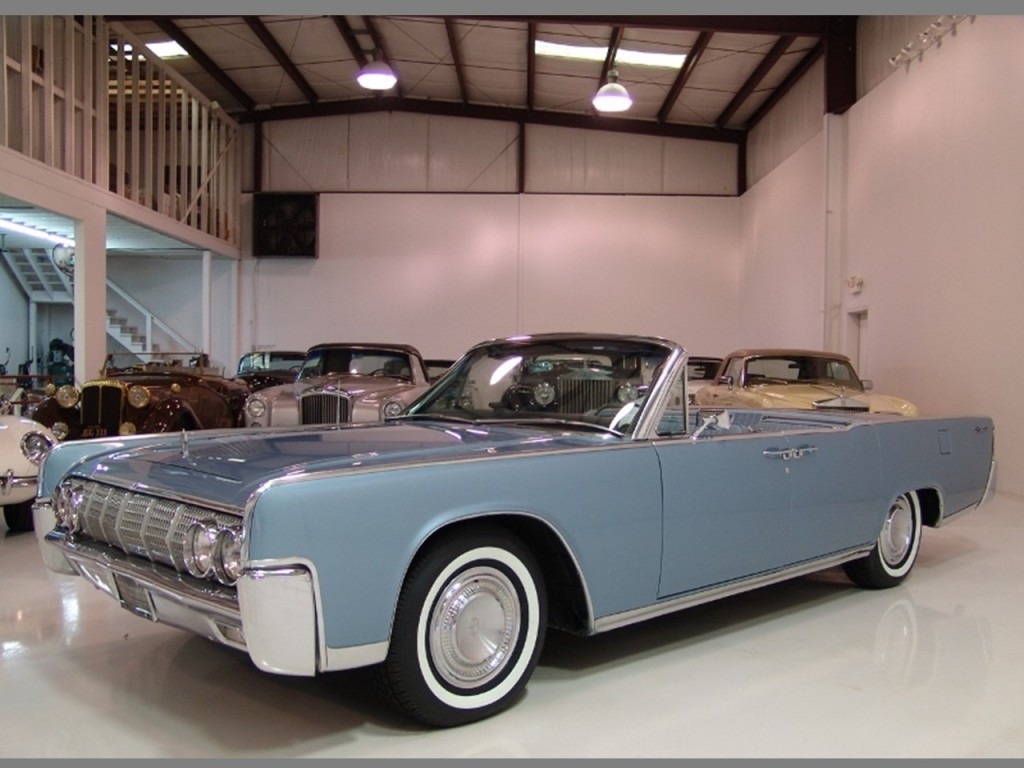 If you are planning to purchase one from this genre…make sure to have an expert inspect the underbody surfaces. Unibody construction is obscenely expensive to restore rust and corrosion damage. Equally important are improperly repaired collision damage that is not only costly but extremely difficult to restore depending upon the botched job and the magnitude of the damage.

If it is in pristine, unmolested condition, the structural solidity and rigid strength of the integral body contributes to the legendary Continental ride. This car makes boulevard travel intrusion negligible. The secret is the sheer weight of this car, it literally ‘smashes’ the road flat… 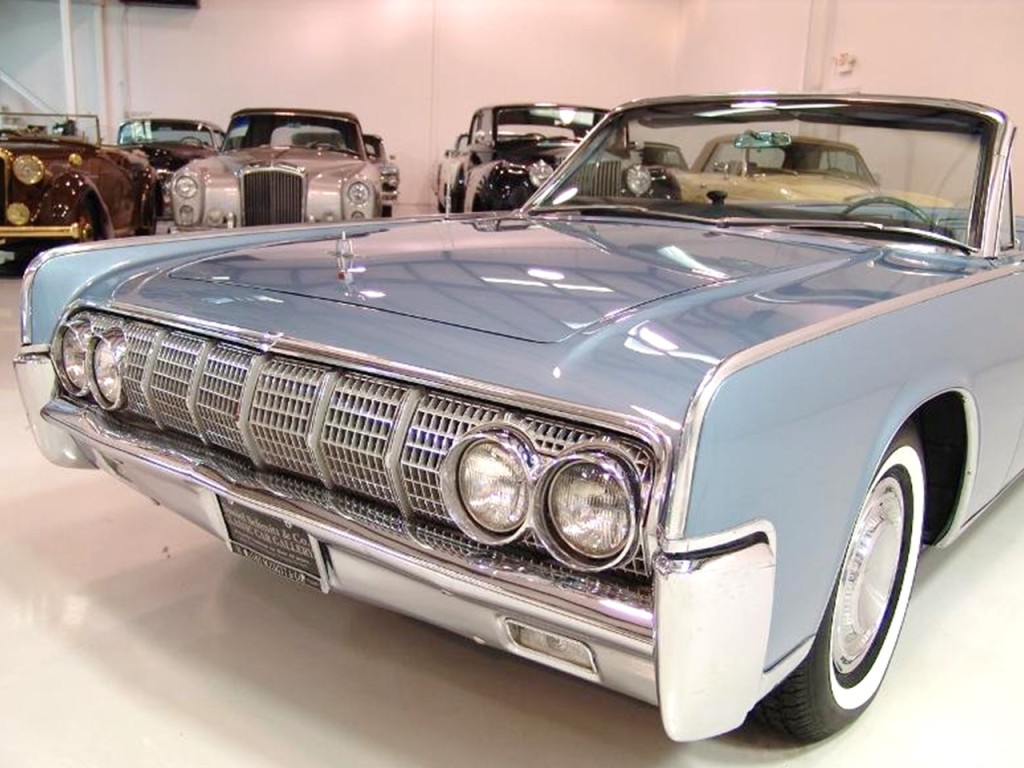 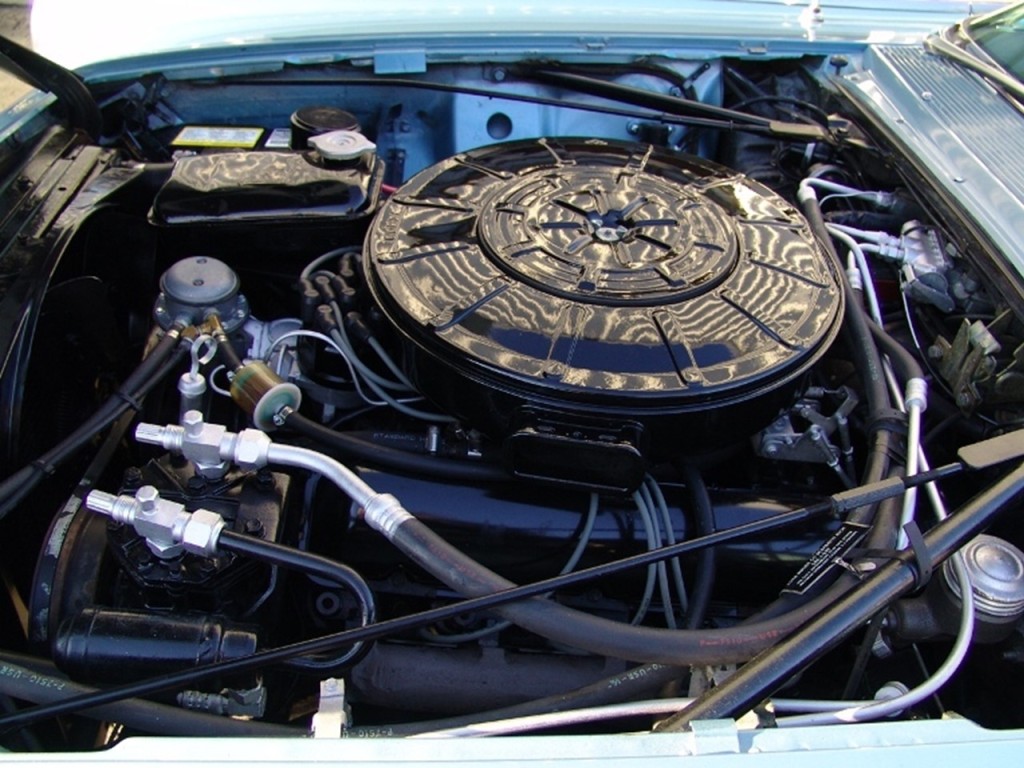 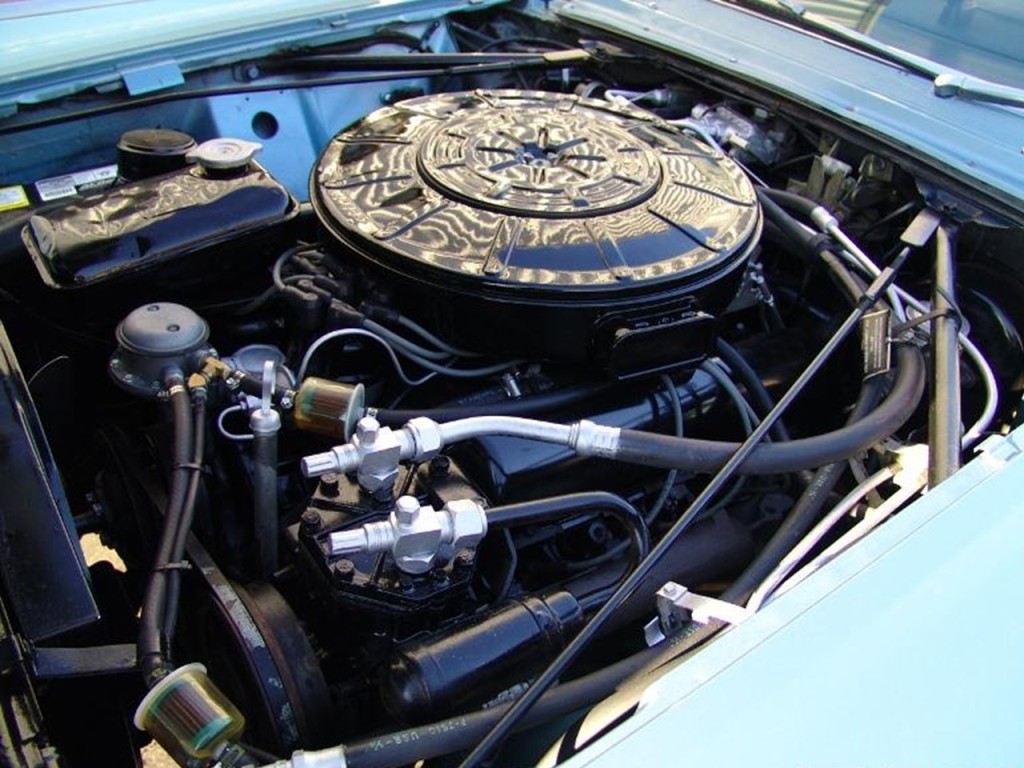 Mechanically, there was no finer construction. The increased length of 216.3” is 3.9” longer than the 1961 model. Its 126” wheelbase is 3” longer than that of the previous Continental making it not only more spacious but smoother in ride quality as well. The longer the wheelbase…the smoother the ride. 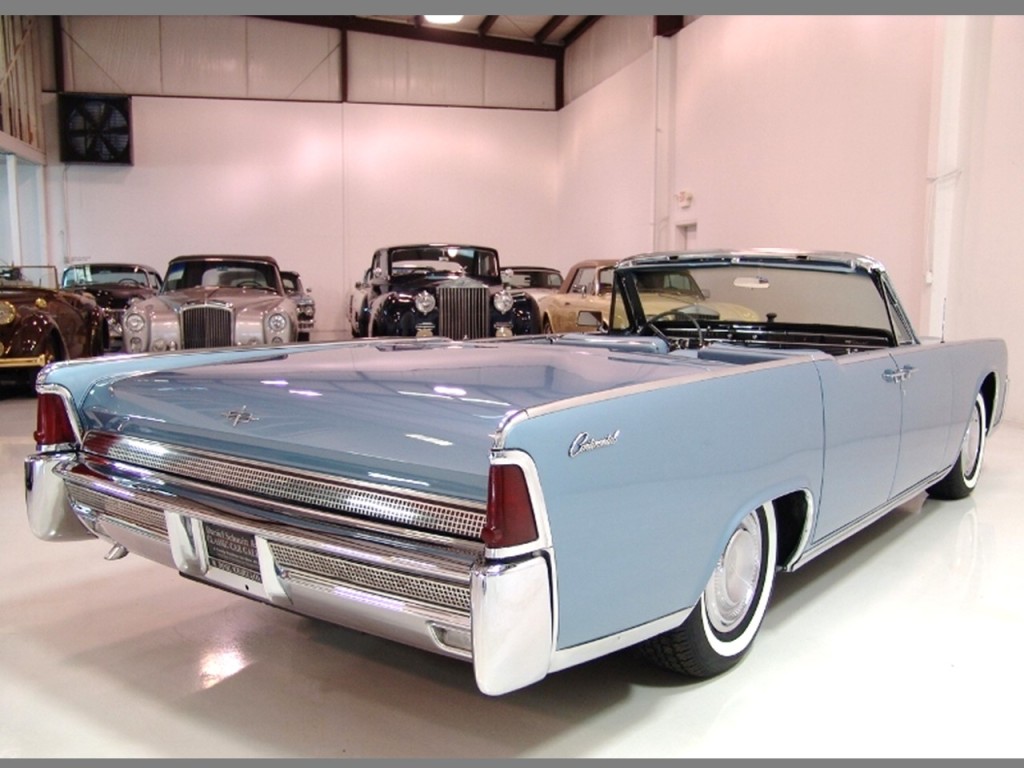 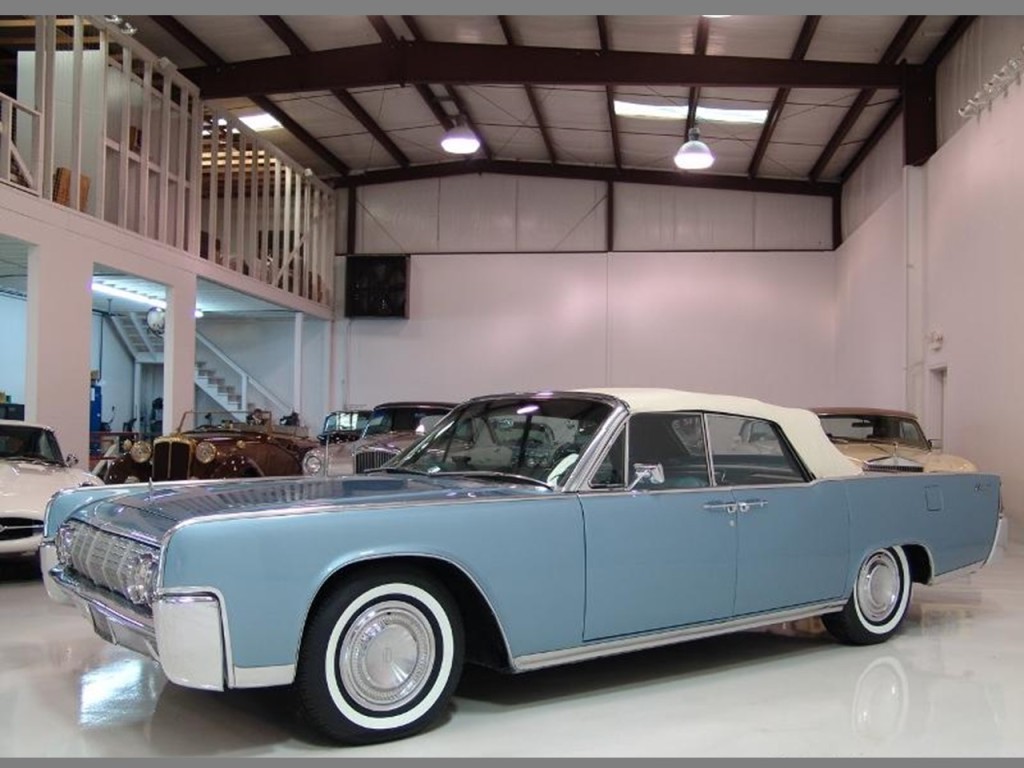 The 1964 model year presented the most significant changes since the 1961 redesign. The Lincoln Continental four-door convertible was the only production version of its type in the world. It continues the graceful, poised, and luxuriously proportioned tradition. This design masterpiece is powered by a 320 hp V8 engine that provides smooth and effortless operation. The Continental’s longer wheelbase and overall length not only made it more spacious but enhanced its ride quality. 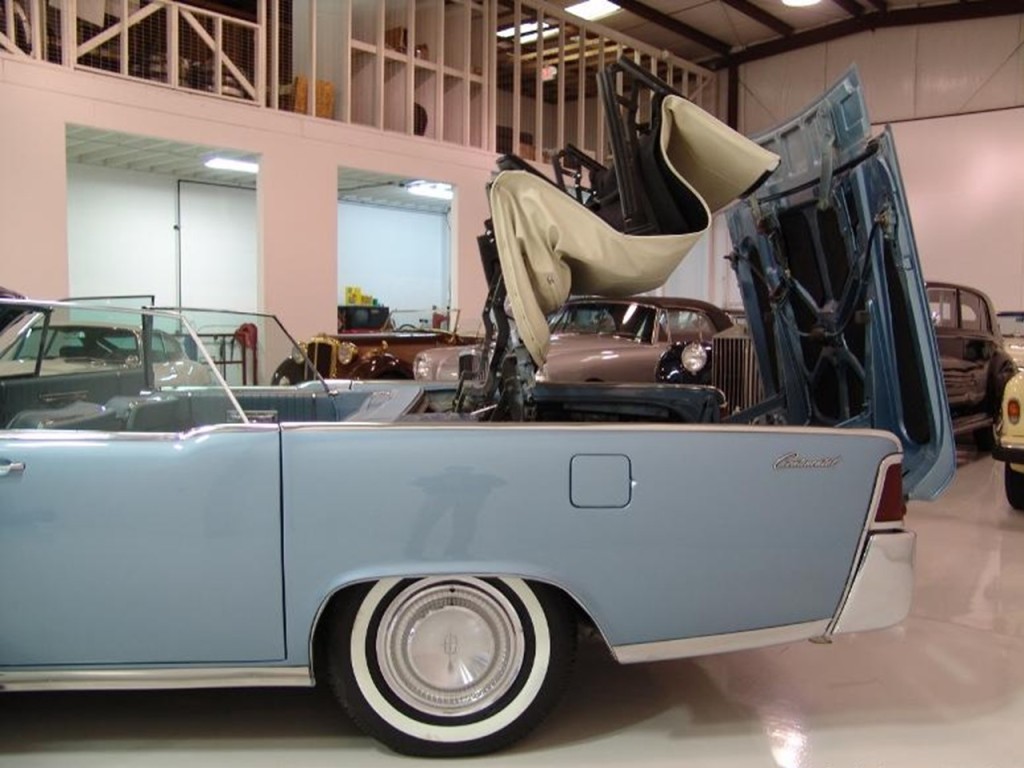 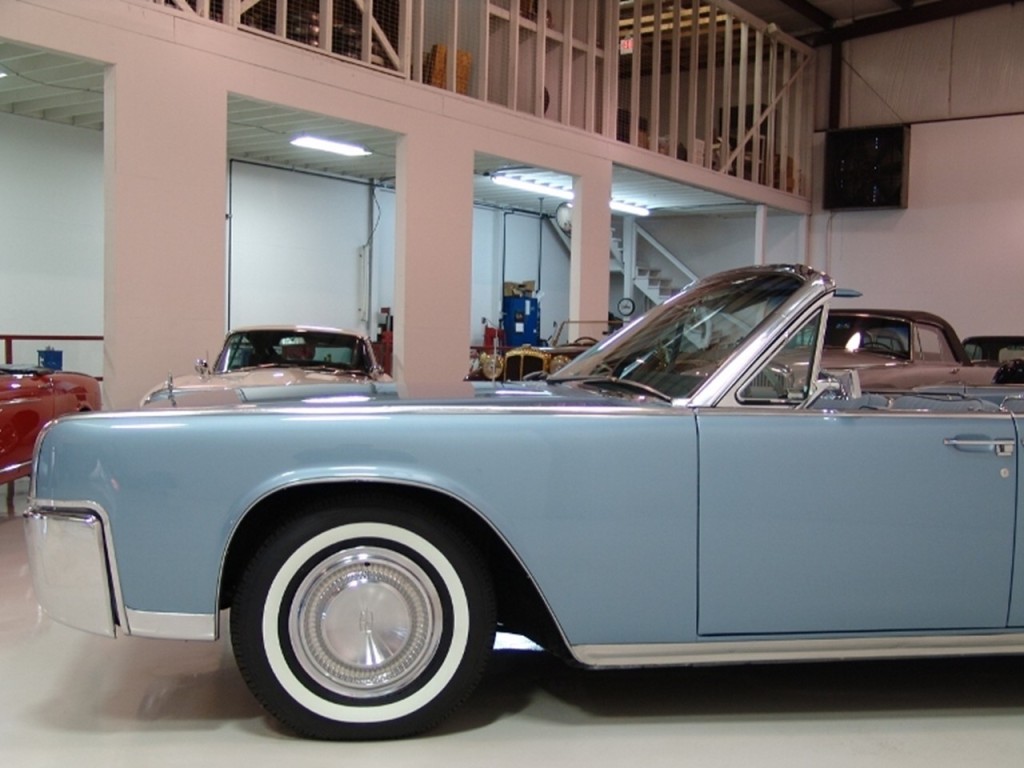 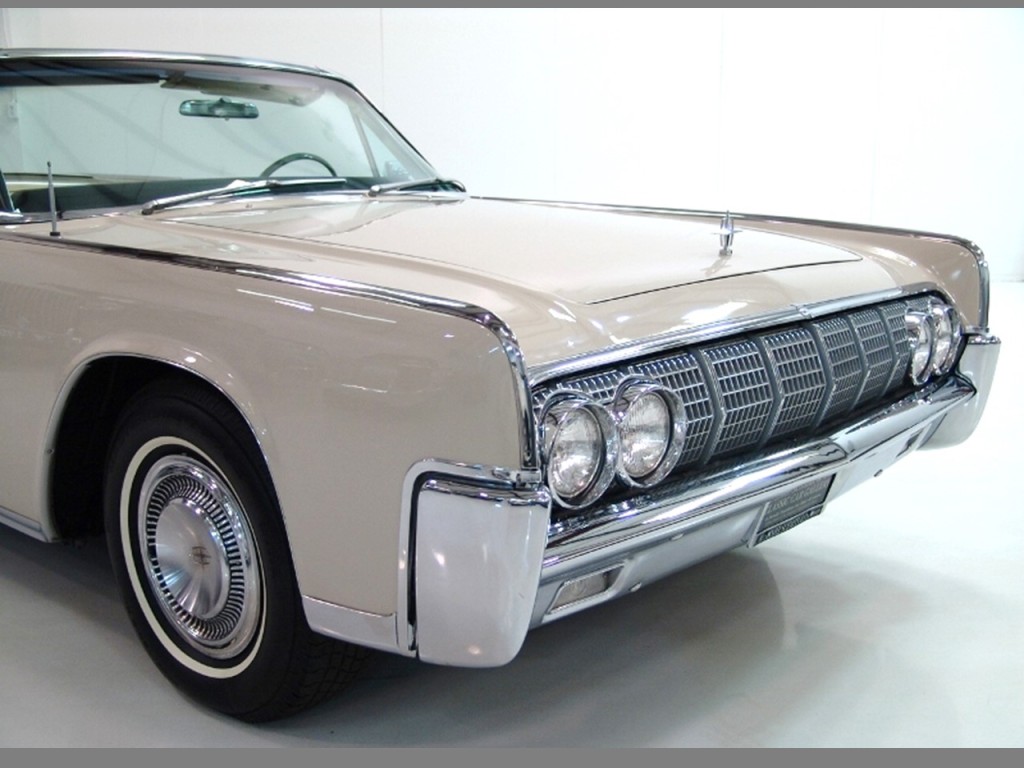 Classic American Marques, Lincoln, The Bold and the Beautiful Lincolns, The Continental Life