The 1968 Buick model lineup was augmented by the Electra 225. It was a suave and sophisticated luxury car without conjecture. So what could be even more exclusive? The elegant Electra 225 Custom Limited hardtop sedan. The posh, subtle refinements made it the epitome of Buick luxury.

The Electra Limited was everything that made Buick one of the foremost automotive brands of the 20th century. It was a thoroughbred luxury sedan with high-performance road manners…the unexpected surprise became evident with one tap of the accelerator pedal.

The interior trim level was elegantly upgraded to reflect the most luxurious Buick in the brand’s history. The “Limited” was an ultra-exclusive model series for Buick’s 1958 model year. The nomenclature was re-vamped for the 1967 model year. The 1968 edition was equally as exclusive. Tailored cloth with vinyl or an all-vinyl version had contoured seat cushions for added comfort.

Its deep-seated luxury rivaled that of the Cadillac DeVille. The Electra Limited provided more than 40” of legroom, 38” of headroom, and 60” of shoulder room. Rich wood-grain door panels and dash inserts highlighted the look of luxury. The 1968 Electra Limited was extremely tasteful in every aspect, presented in a manner only Buick could pull off.

The 1968 Buick Electra 225 Custom Limited sedan rode upon a long 126” wheelbase, had the luxury length of 224.9”, with a wide 80” stance. This supreme achievement in motoring was an automobile whose styling, performance, ride engineering, and overall quality was honed to superlative stature attained by few of the world’s automobiles. As the name implies “Limited” was a luxury trim option for the Electra 225 Custom hardtop sedan built at a restricted pace. Imagine this parked in your driveway.

The 1968 Buick Electra Limited was more than a pretty car. Buick was synonymous with performance. “Go fast…with class” was one of their marketing campaigns showcasing the performance aspects of this luxury brand. A 360 hp V8 engine produced 475 lb-ft of peak torque @ 3,200 rpm. It was the powerful Buick 430 CID 16-valve pushrod powerplant equipped with a 4-bbl downdraft Quadrajet carburetor, mechanical fuel pump, and hydraulic lifters. This mighty V8 was constructed with a cast iron block and cylinder heads for durability.

GM’s Automatic SuperTurbine transmission was standard, providing quick imperceptible shifts. GM synchronized the carburetor with the transmission ratios which not only operated silky smooth but increased fuel economy. The 1968 Buicks were practically “panting at the leash” waiting to pounce on the competition. Just ask the owners of a Buick Wildcat or Buick GS…and of course the Electra-

The 1968 Buick Electra Limited was built as body on frame construction. It used a sturdy perimeter frame. The front suspension was the traditional upper and lower control arms with independent ball-joints and link-type stabilizer bar. The rear was fitted with a four-link suspension.

Coil springs and direct acting hydraulic shock absorbers were fitted to the front and rear. This type of frame was virtually maintenance-free, unlike today’s suspensions that are dominated by expensive struts, bushings, super-expensive trailing arms, knuckle assemblies, and four-wheel alignment.

The 1968 Electra 225 required front end alignment rarely replacing bushings and shock absorbers to keep it in road-ready condition. It was chassis like these that had the fittings for lubrication that made them last forever. Today’s lubrication-free chassis eventually require expensive maintenance. The 1968 Buick Electra Limited was rear wheel drive thus eliminating today’s CV joints and boots…and lest we forget those expensive half-shafts

Automobiles such as the 1968 Buick Electra limited were very substantial and with proper care lasted many, many years before replacement of any parts was necessary. Power brakes were standard with finned air-cooled aluminum front drums with cast iron liners and finned rear drums. The parking brake was operated through the rear braking system.

The braking system used a dual master cylinder for independent front and rear operation and corrosion-resistant brake lines. The brakes were equipped with a self-adjusting feature which adjusted themselves each time the car was driven in reverse and the brakes applied.

Thanks to MJC Classic Cars Lakeland Florida for these rare photos 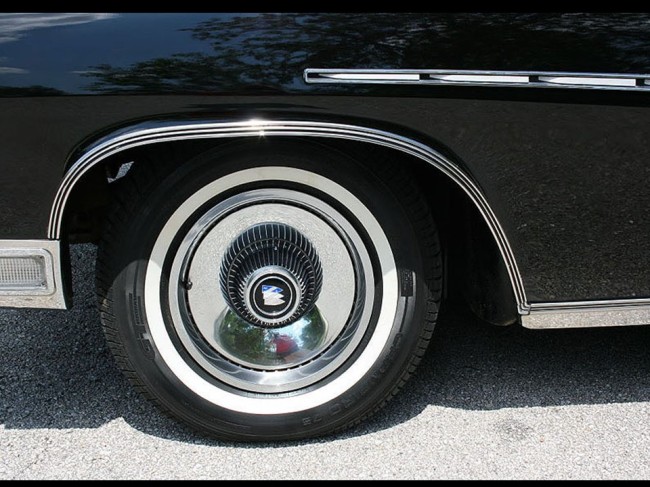 The 1968 Buick Electra 225 Custom Limited hardtop sedan was the finest Electra 225 ever built. It was powered by the 430 CID V8 engine that produced 360 hp. Astonishing performance in an ultra-luxurious motorcar were the benchmarks of a Buick Electra. Buick was a NOTORIOUSLY reliable automobile constructed with unsurpassed fit and finish.

The Electra 225 augmented the Buick model hierarchy…it was the Electra Limited that epitomized Buick luxury and elegance. The 1968 Electra Limited was everything that made Buick one of the foremost automotive brands of the 20th century. Power, performance, and prestige were the serendipitous requisites that complemented the 1968 Buick Electra 225 Custom Limited hardtop sedan. There will never be another Buick Electra 225…