“As the Standard of the World Turns” salutes concept greats 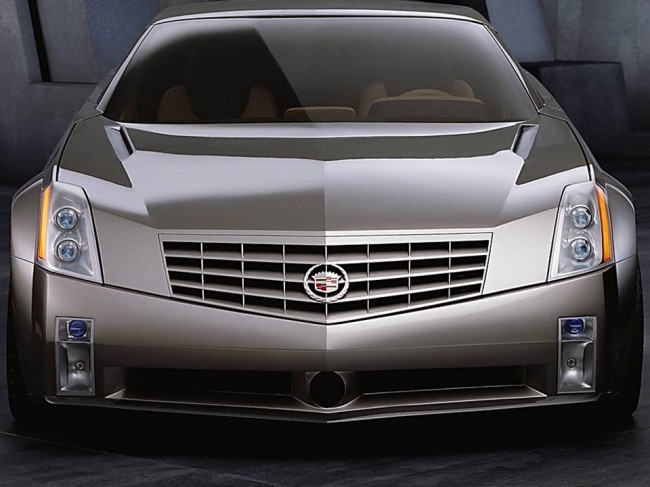 The Evoq went where no other Cadillac had ever gone before…

The Cien Flagship coupe rocked the world with sophistication

“As the Standard of the World Turns” salutes Cadillac’s contemporary concept cars. Part II in this series will showcase the Cadillac Evoq, the Cadillac Cien, and the exotic Ecojet. The designers reached for the stars bringing tomorrow into the present. Sometimes a glimpse into the future becomes reality. 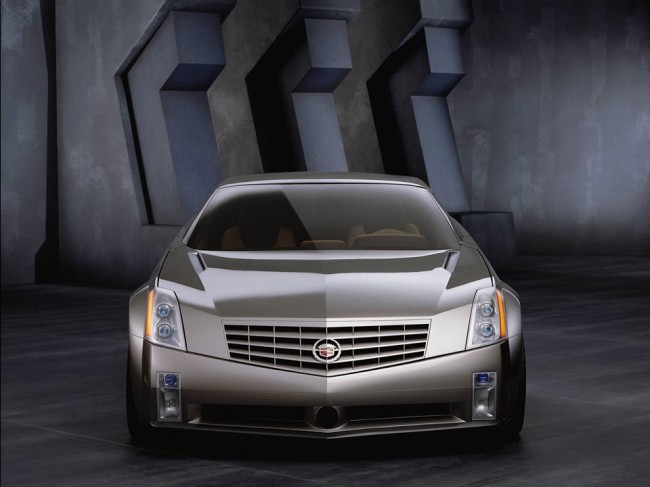 The 1999 Cadillac Evoq is a stunning example of Cadillac craftsmanship. Art & Science created Evoq, a luxury roadster where form follows function. It is a front engine rear drive two-seater with a retractable hardtop. The Evoq was built by Metalcrafters of California in 1998. It sported the first use of longitudinal mounting of the Northstar engine. The Cadillac Evoq is not retro in styling. It is a refreshingly spirited design that “evokes” visions of tomorrow. 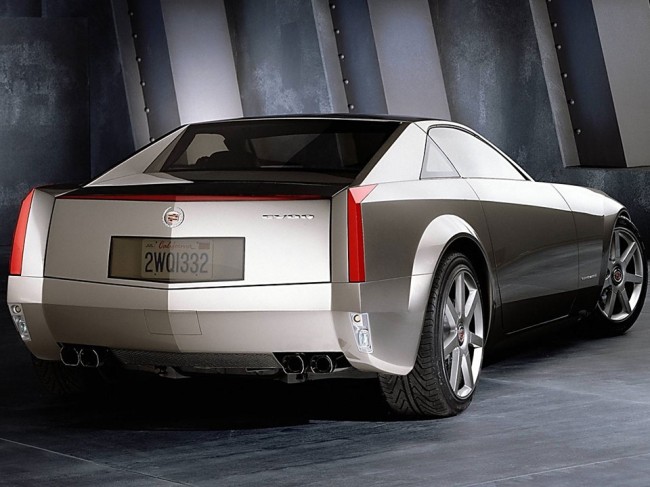 The Cadillac Evoq featured the next generation of the Northstar V8 equipped with an intercooler and Variable Valve Timing (VVT) that boosted the performance of this supercharged thoroughbred. Its fully integrated supercharger and intercooler unit was developed exclusively by GM engineers. 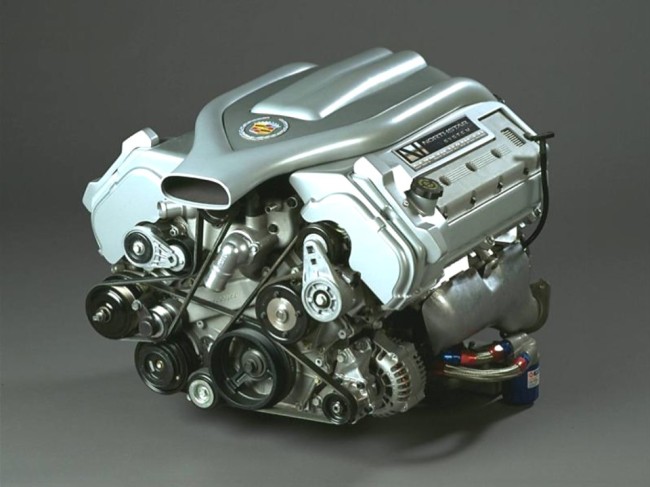 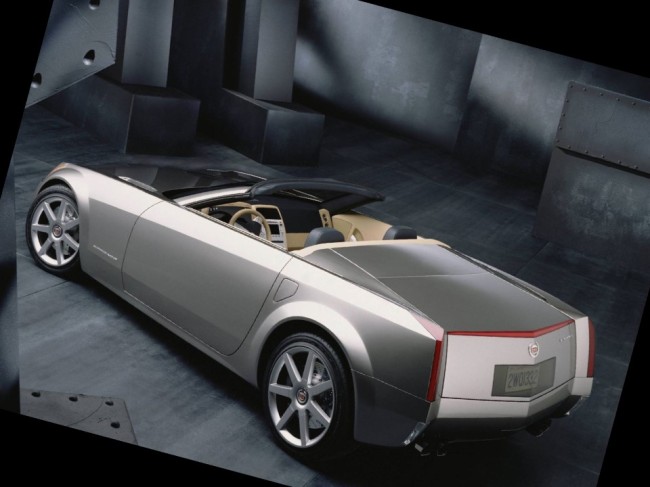 Evoq was designed with a modified 4-channel version of Cadillac’s StibiliTrak stability enhancement system. It synchronized the car’s suspension, steering, anti-lock brakes, and traction control to aid the driver under diverse driving situations. It is a sort of “thinking suspension.” 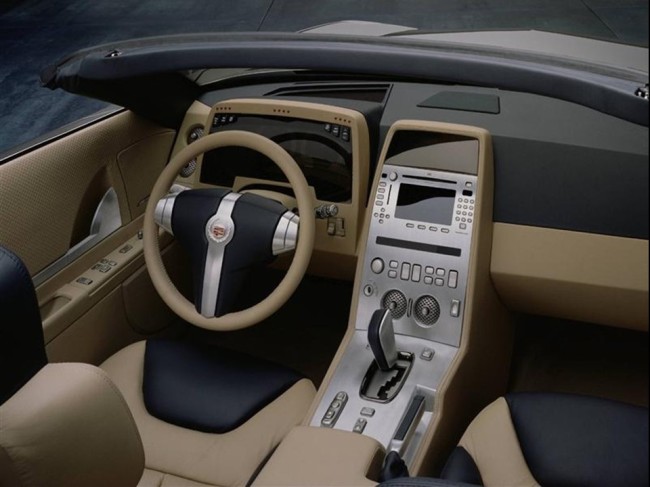 The Evoq is designed to keep the driver focused. It has steering wheel controls and an “EyeCue” head-up display. EyeCue is the first application of a fully re-configurable head-up display capable of alternating between in-dash computing and Night Vision. 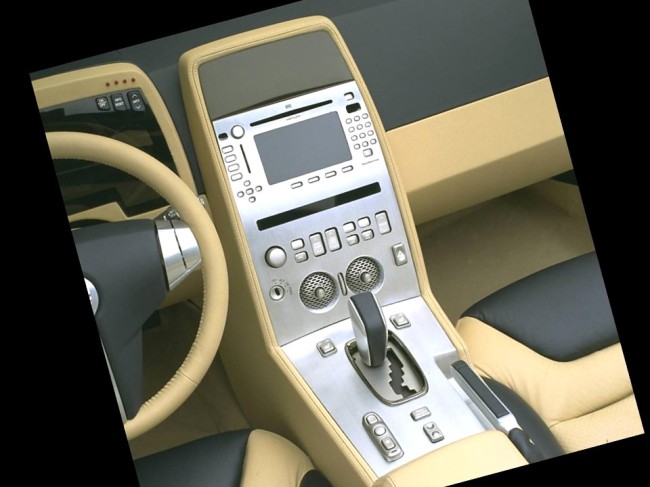 The Evoq was a showcase of Cadillac technology. It is a predictor of what Cadillac will offer in future production models. A direct spin-off from the Evoq is the Cadillac XLR luxury roadster. 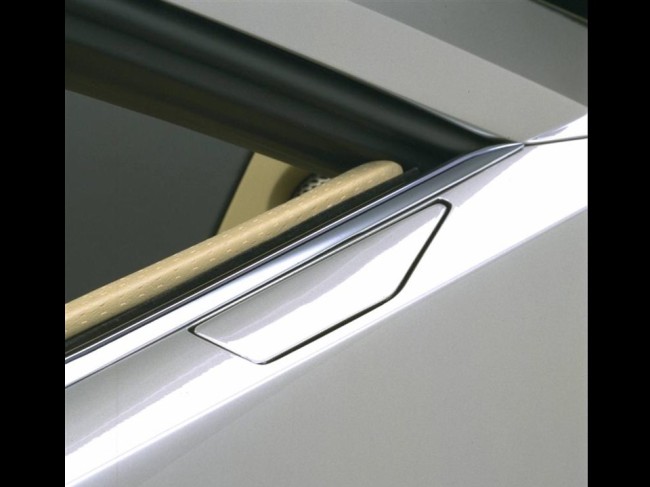 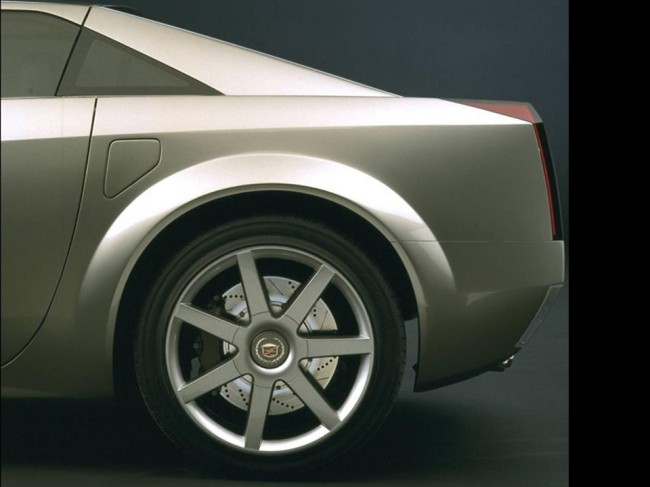 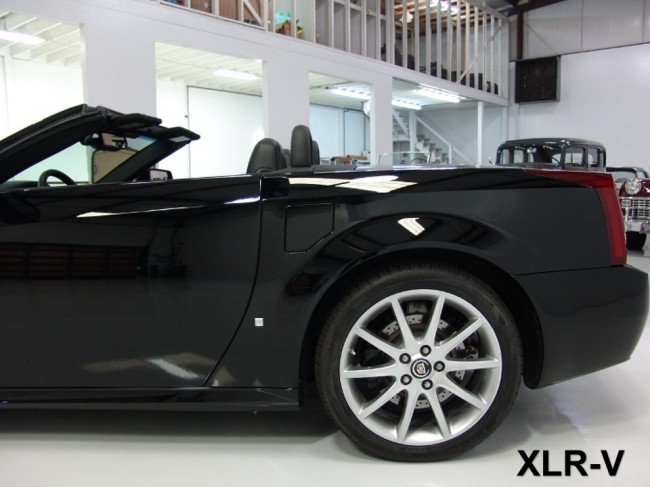 Unlike the XLR’s thermo-plastic body panels, the Evoq sports an all-steel body. It communicates Cadillac’s vision of Art & Science. The Evoq’s bronze glass and the iridescence of its paintwork gives it 21st century attitude. The remote key fob not only locks and unlocks the doors, it also opens the doors slightly. The absence of exterior door handles aid’s the architecture’s aerodynamic efficiency.

With the touch of a button the Evoq’s hardtop folds and stows away neatly in the trunk. It is the best of both worlds. The unique design of the retractable hardtop maintained the coupe’s dramatic profile without the compromise involved with a ragtop. The chassis was designed to be more rigid to accommodate the convertible aspects by using two solid hydro formed rails that span the vehicle end to end. (Can you say Corvette?)

The Cadillac Evoq concept expresses Cadillac’s passion and ingenious technology that have always been hallmarks of the brand. Welcome to the Cadillacs of tomorrow. Evoq is a precision hyper-luxury coupe for the 21st century. 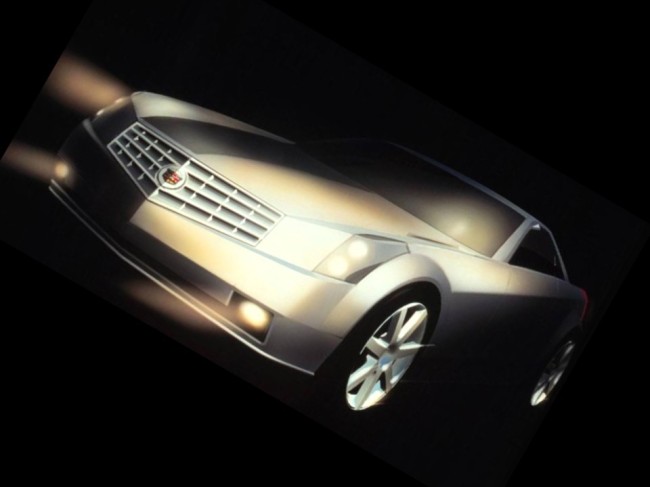 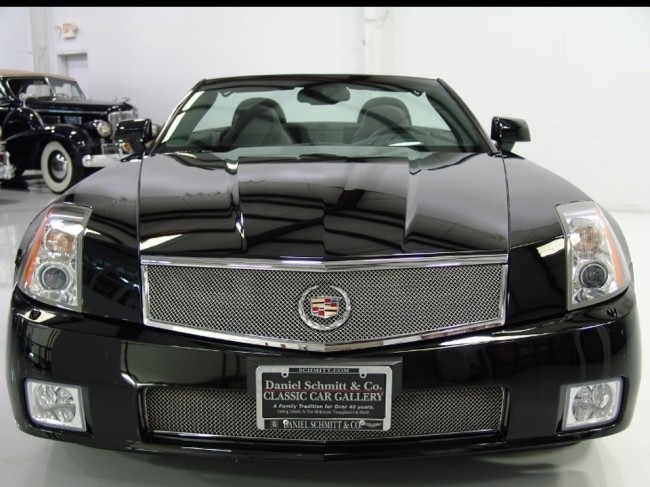 Thanks to Daniel Schmitt 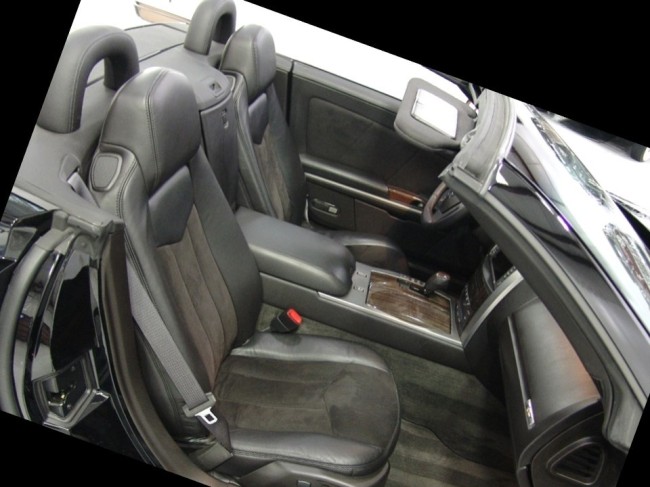 Now we fast-forward to the Cadillac Cien, a distinctive design with upward opening doors and sleek aerodynamic architecture. It is a V12 powered two-seater that produces 750 hp. The Cadillac Cien was unveiled at the 2002 Detroit Auto Show.

This carbon-fibre beauty was designed to celebrate Cadillac’s 100th Anniversary. “Cien” is Spanish for 100. This is a supercar that could contend with the Lamborghini. The Cien is one of the most attractive and successful Art & Science designs. It was designed and built in the U.K.

The Cadillac Cien is a formidable 21st century supercar. Its design was inspired by the F-22 Stealth fighter aircraft.  Even the blue glass of the Cien boasts technology, it was inspired by sport performance eyewear. The Cadillac Cien is a very impressive high technology beauty which is the quintessential defining image for Cadillac. It epitomized the Art & Science era. 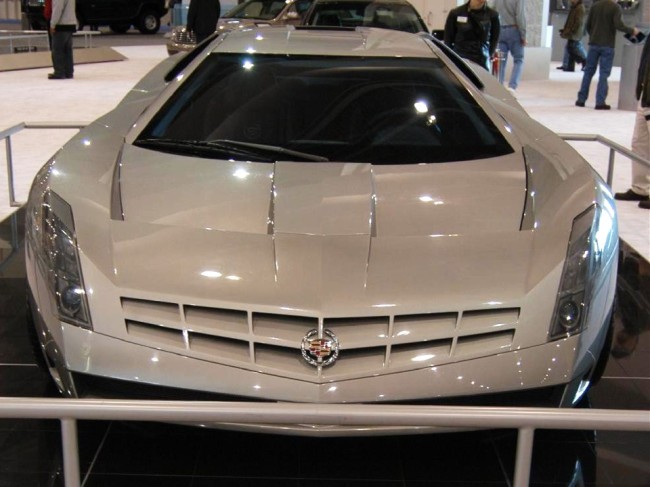 This stunning ultra-modern mid-engine two-seater is a technology Flagship for the brand. The Cien has a dramatic look from any angle. It is nothing quite like anything Cadillac has ever designed. The only remnants from its Cadillac heritage is the massive egg-crate front grille and the Cadillac-style taillamps. It has a speed-sensitive spoiler that adjusts automatically.

This magnificent engine is visible beneath the clear window in the deck lid. This engine is the Northstar XV12 longitudinally mounted XV12 concept. It used GM’s Displacement on Demand technology that allowed the engine to operate on six of its twelve cylinders to increase fuel economy. 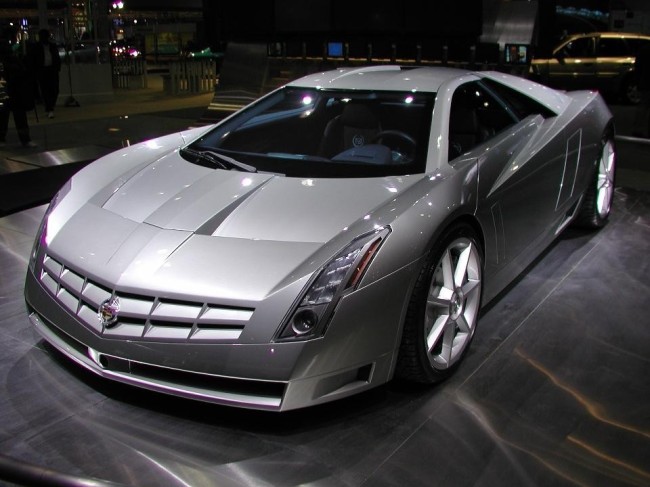 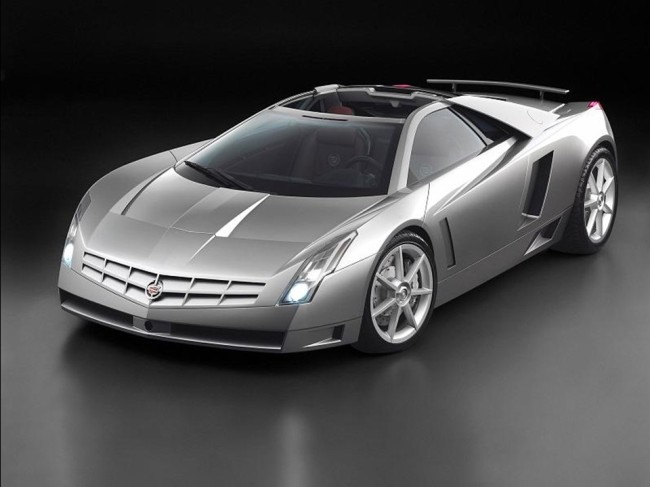 The Cien’s monocoque and body are made of carbon-fibre composite materials like the Lamborghini. Its bodywork has operational vents built into it to control cooling airflow. It rides on large 19” front and 21” wheels. The Cadillac Cien brought the future to the 21st century. 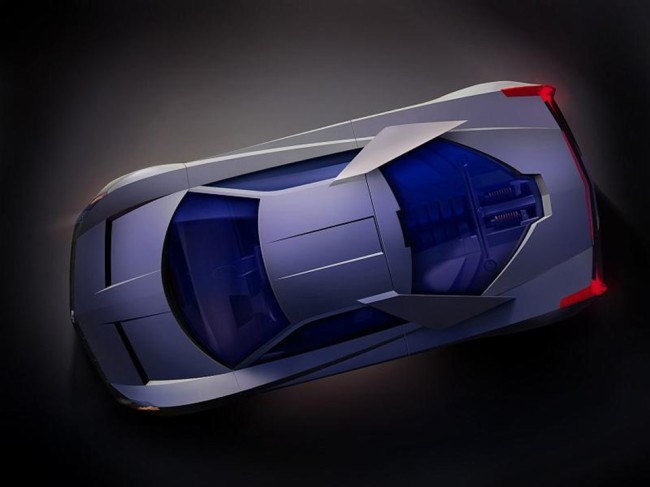 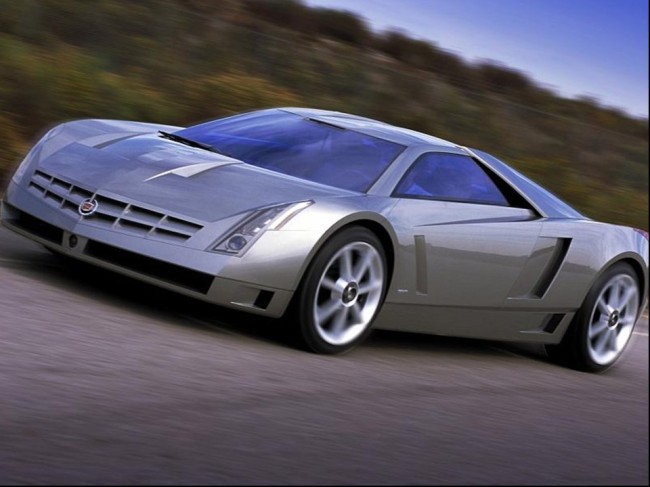 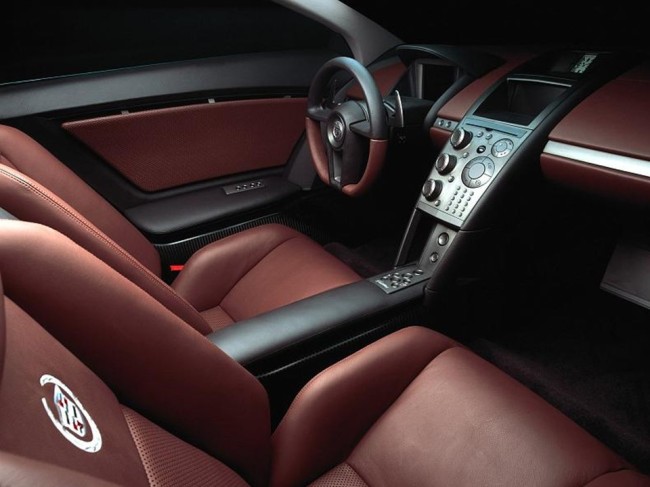 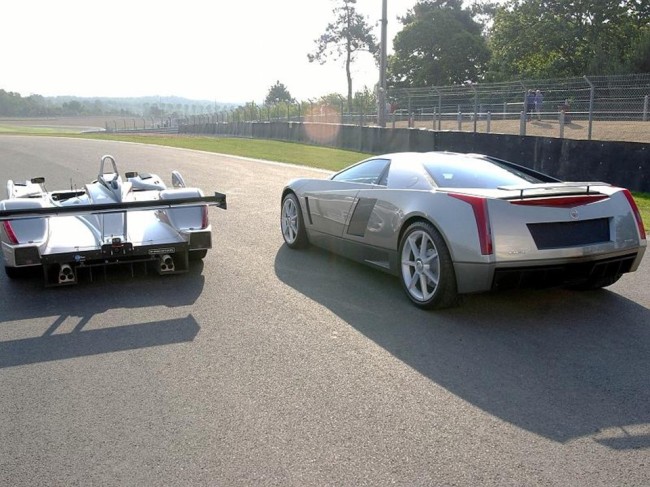 The Cadillac Cien is “rudely-elegant” in its demeanor. This is most definitely the definitive “bad-boys” car. If only it could be. The Cadillac Cien is power, prestige, and presence for the new millennium. This is one-up on old George Jetson! We finally passed his genre in the future…can you believe that? 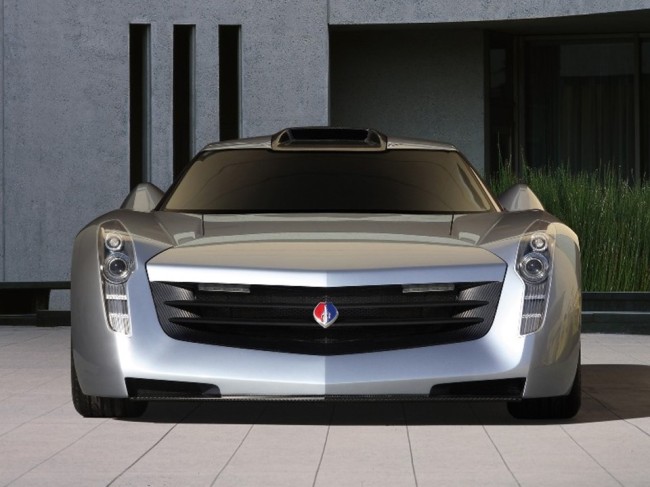 The Ecojet was a joint venture between Cadillac and nighttime TV host Jay Leno. It began as a sketch by Jay on a napkin. The GM Advanced Design Studio in California did the design and engineering. The Ecojet was constructed at Jay’s facility by his chief mechanic Bernard Juchli. 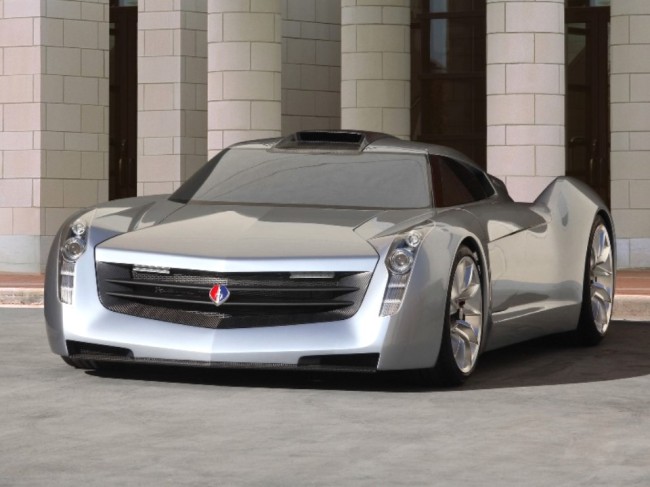 The Ecojet was built on a modified Corvette Z06 aluminum frame. It is powered by a 650 hp Honeywell LT-101 turbine engine. This unusual vehicle is designed to run on biodiesel fuel. This powerplant is usually found in helicopters. It is rear drive through a 4-speed automatic transaxle from the Corvette C5.

The Ecojet has two fuel tanks. One tank is for the main fuel which is a biodiesel soy bean oil and the other tank holds a clean-burn jet engine fuel. The jet fuel is used to start the engine and then at the end of the journey. It is designed to clean the turbine because the biodiesel fuel can build up a tacky-gummy residue that would seize the turbine. Biodiesel fuel is basically refined cooking oils so the exhaust smells like cooking French fries!

The Ecojet is a two seat coupe. It is constructed from carbon-fibre and Kevlar. One look confirms the aeronautical DNA. It is an odd 21st century supercar. Per Jay Leno, the car is geared to do 245 mph. It is impressive however you look at it.

The Ecojet is parked beside Leno’s 1963 Chrysler Turbine Car which is the only Turbine Car in a private collection. Jay would not disclose how much he spent on the Ecojet project. The Ecojet burns 8 to 9 gallons of fuel per hour… 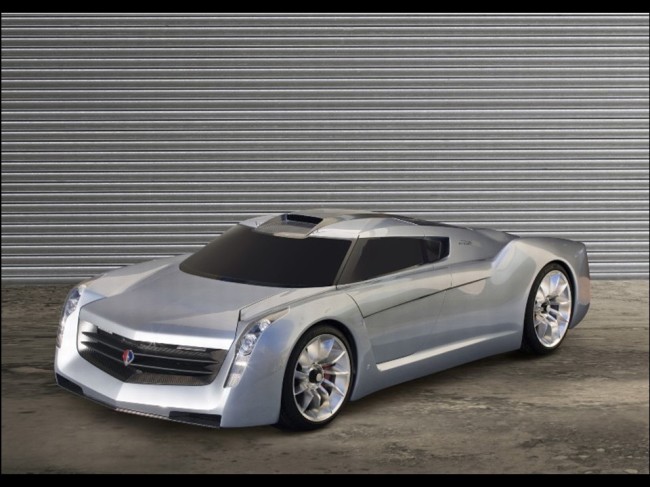 With automotive concepts such as the Evoq, Cien, and the Ecojet, the future is here today. The next generation of the luxury car is long overdue for Cadillac. These three concept vehicles offer a glimpse into automobile design to come. Concept cars can be more than just an exercise in design.

The Cadillac XLR was inspired by the Evoq concept car. The Cadillac Cien represents the vision of 21st century Flagship models to come. Jay Leno’s unique Ecojet is an interesting adventure in design and individuality…it is the perfect change from the status-quo. Its impracticality makes it fun! Thanks Jay for sharing this with the world.

If Cadillac follows through with a Flagship along the lines of the concept cars they are designing, they will return as the world leader in technology…maybe even retaining the crown again as the “Standard of the World.”

If they would simply focus upon the LUXURIOUS aspects of a unique Flagship instead of trying to chase BMW, Mercedes-Benz and the like with ‘strange’ performance cars…Cadillac would be the formidable ultra-luxury brand they are supposed to be.