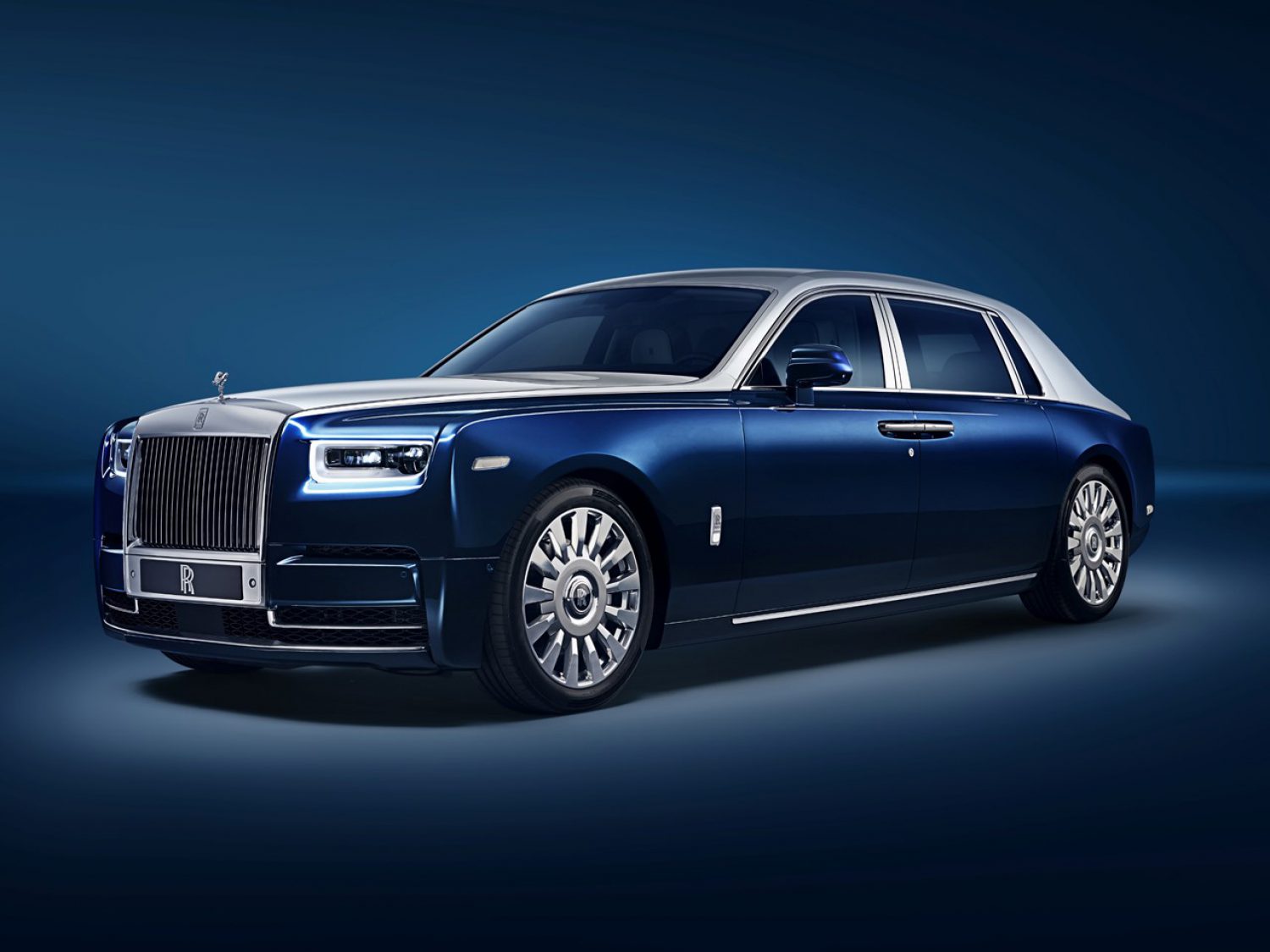 Eldorado was completely re-designed for 1979 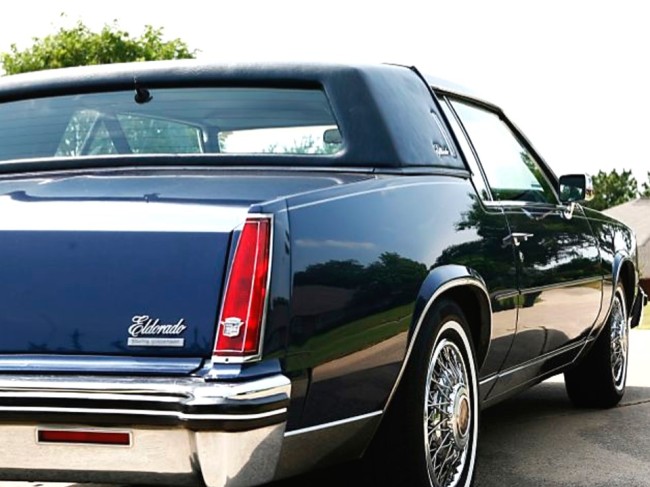 The new breed of Eldorado was introduced for the 1979 model year. It had been re-designed from the ground-up. Eldorado was world-class luxury…first class, Cadillac-style. The trim new size increased its agility and overall performance. The Cadillac Eldorado was always the epitome of Cadillac luxury. The 1979 Eldorado was an impressively new performance…in the continuing saga of “As the Standard of the World Turns.”

Front-wheel drive, Electronic Level Control, four-wheel disc brakes, Electronic Fuel Injection, and Automatic Climate Control were among the many standard features that made this a world-class automobile. The 1979 Eldorado was engineered to make efficient use of space. It had a new chassis, a new body, and a new engine.

This was the next generation of the Cadillac Eldorado. Its advanced engineering was due in no small part to its computer design. It took full advantage of the most advanced automotive technology to bring the 1979 Eldorado to a new precision size. The engineering objective was to reduce service complexity should it be required. 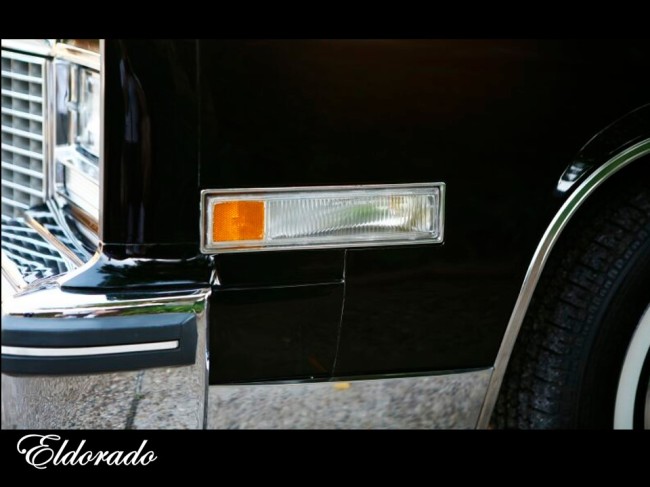 Every detail of the all-new 1979 Cadillac Eldorado made it one of the world’s best engineered automobiles. Its front-wheel drive provided optimum traction and stability, with the engine just above the drive wheels. Four-wheeled independent suspension allowed each wheel to react independently to road conditions providing a smoother ride.

The Automatic Climate Control system automatically heated, cooled, and de-humidified the air at one touch of the temperature control. The compressor worked only when required. The 1979 Eldorado’s space efficient design provided more head and legroom than its 1978 predecessor.

Twilight Sentinel automatically turned lights on and off according to light conditions and included a timer to light one’s way to their door safely. Steel-belted wide whitewall tires were match-mounted to the wheels to reduce deflection and increase rolling smoothness. 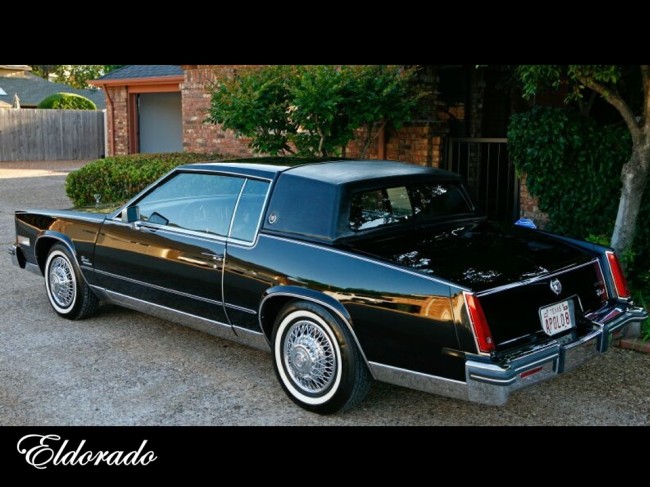 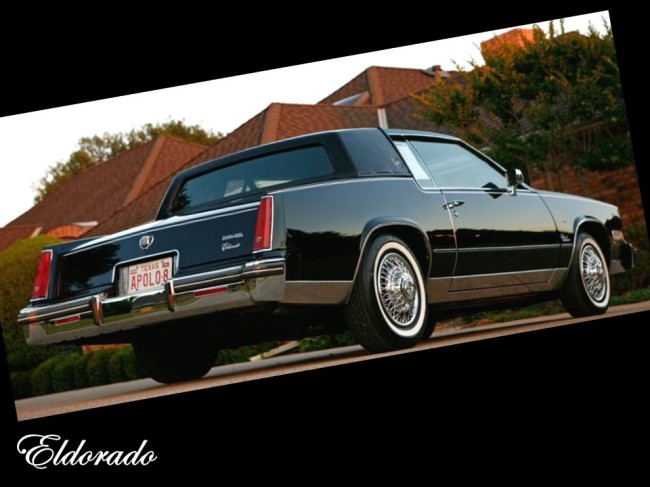 The 5.7 litre Oldsmobile and the 6.0 litre Cadillac V8 for the 1980 model year were the last truly reliable engines for this genre. We were about to enter the decade of “extremely bad taste.” Cadillac had the audacity to offer a diesel engine which I absolutely refuse to address…yes, the era of extremely bad taste aka the kitschy-faux luxury cars of the ill-fated Eighties… 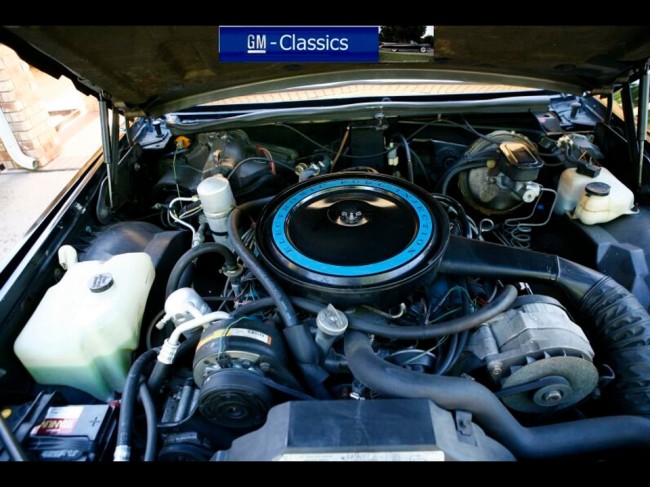 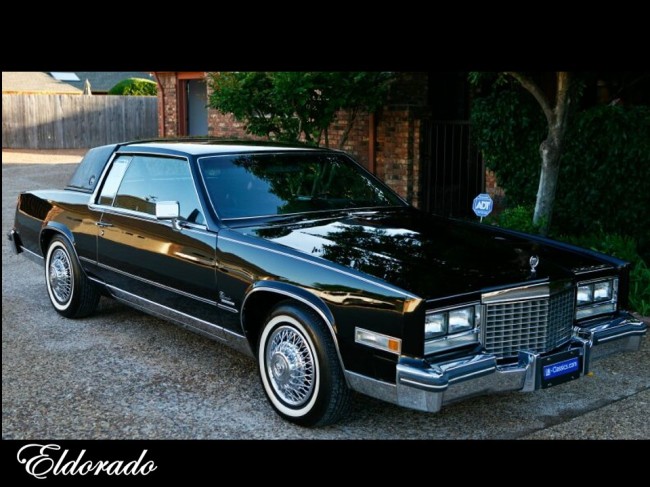 Hydraulic direct action shock absorbers were fitted to the front and rear. The rear suspension used independent trailing arms with coil springs and self-leveling system dampers. This new breed Eldorado rode on a 114” wheelbase and was 204” in length, with a wide 71.4” stance.

The 1979 Eldorado not only had an all-new four-wheel independent suspension, it used four-wheel disc brakes as well. The system was set-up with single piston sliding calipers with ventilated discs fitted to all four wheels. Cadillac’s triple braking system was standard. The system used a dual hydraulic master cylinder with separate fluid chambers to provide independent front and rear operation. It used a tandem vacuum power booster.

The discs self-adjusted themselves each time the car was driven in reverse and the brakes applied. The parking brake had silent action and an automatic vacuum release. It was a true auxiliary brake since it wouldn’t lock with the engine running and car in gear.

The 1979 Eldorado was the first complete re-design since the 1971 model year. It was a trim 224 pounds lighter and 20 inches shorter than the car it replaced. The turning circle was five feet tighter. The Cadillac Eldorado was one of the cars that pioneered front-wheel drive.

The styling was unmistakably Cadillac with its long hood and short rear deck. It had a low-slung chiseled look with a hint of the iconic Cadillac tail fin at the rear. Its trim new size was perfect for today’s world. This new silhouette was most definitely Cadillac. 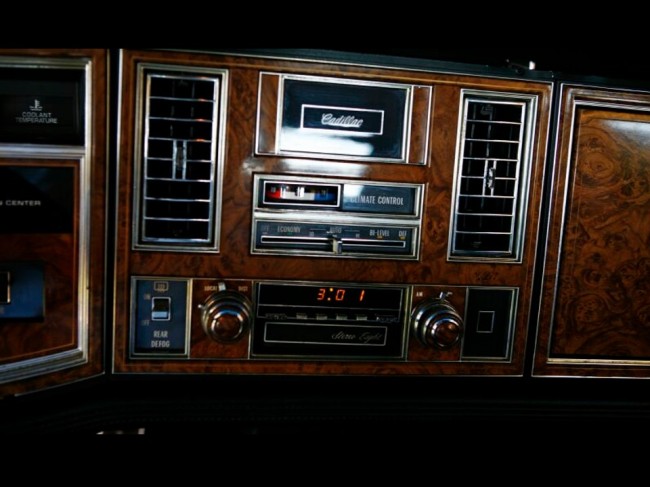 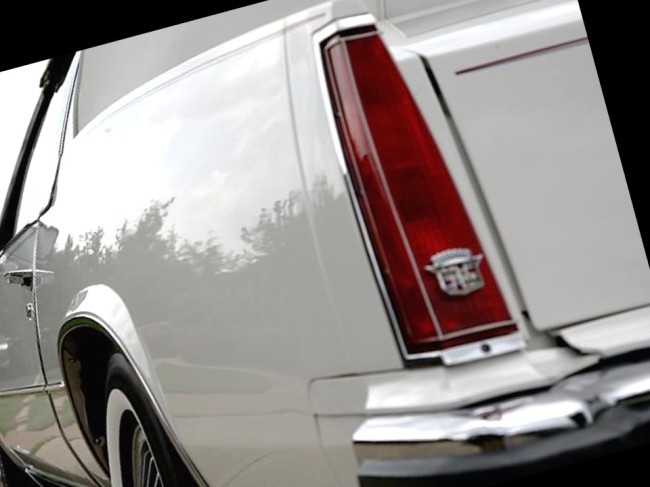 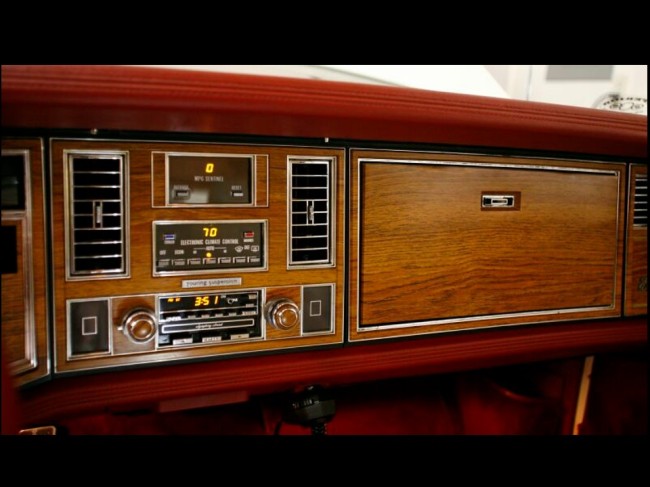 The interior featured hand stitched button-tufted pillow-style seating in either luxurious Dante cloth or five colors of supple leather. Plush Tangier carpeting was under foot. A leather trimmed steering wheel completed the look of elegance. The Biarritz was the epitome of Eldorado luxury. 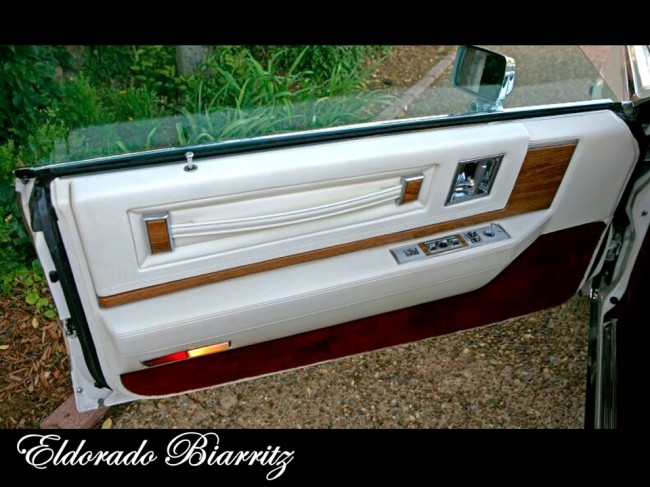 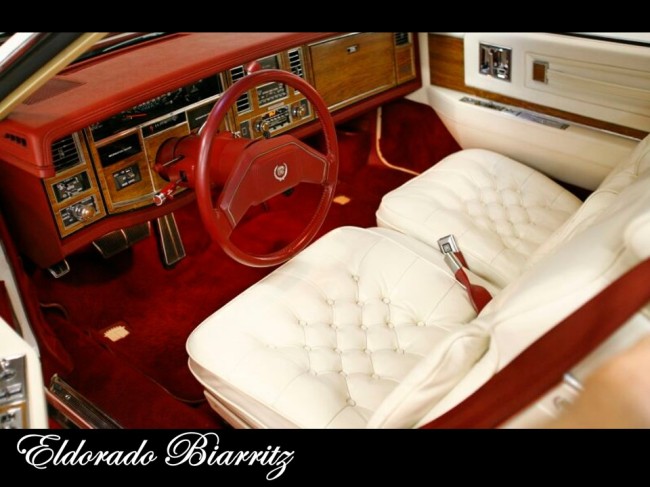 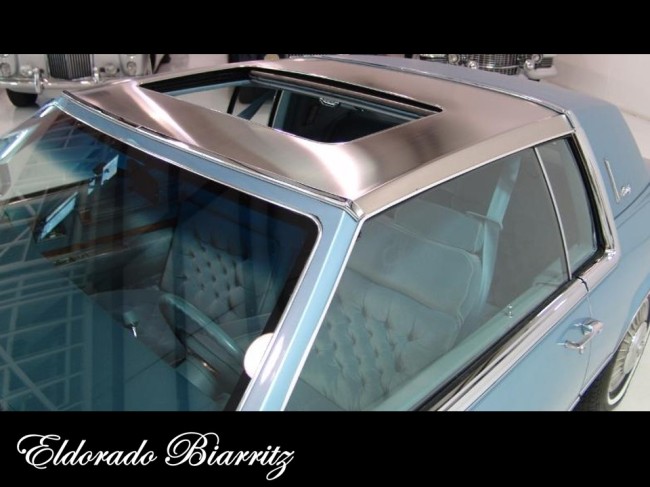 The 1979 Cadillac Eldorado was the new breed of this distinctive personal coupe. Eldorado was always the pinnacle of luxury on the grand Cadillac scale. The 1979 Eldorado was world-class in design and engineering. Standard front-wheel drive, four-wheel independent suspension, four-wheel disc brakes, Electronic Fuel Injection, Electric Level Control, and Automatic Climate Control made this world-class coupe even more distinctive.

Its lower wind-cheating silhouette combined with its aerodynamic design not only optimized its maneuverability but fuel economy as well. It was designed for easier serviceability and fewer maintenance services. This was the new breed of drama…in the continuing saga of “As the Standard of the World Turns.”